I apologize in advance for the hijack, but if you are looking for a couple more patrol projects/parts cars there are three for sale on the Toledo CL. No affiliation, just thought they might be of interest.

Ctenosaurian said:
I apologize in advance for the hijack, but if you are looking for a couple more patrol projects/parts cars there are three for sale on the Toledo CL. No affiliation, just thought they might be of interest.
Click to expand...

Seen that, myself not interested. No worries on the hijack, always on the look out for good Patrols!

So working through my punch list to finalize the 64 chassis now that everything came back from the platers.


NOS detent balls and zinc plated springs. In front of my hand is the cap bolts which I had zinc/yellow chromate plated. This if for t-case shifters, restored to like new condition and it works like brand new!

Just about finalized with the trans & t-case, had some stuff I needed back from platers to finish it up

fully restored e-brake, works like brand new! NOS pads on e-brake along with NOS rivets (!) and the drum was turned down. Cadmium plating on the hardware or Dupoint Imron black. Brand new Spicer u-joints went into the driveline, spec'ed for a dana44, I modified them slightly to fit. New felt slip joint seal also went into both drivelines, custom made by myself.

Early (pre-66) oil filter housings base did not have a check valve built into them. This particular housing base is from a later model Patrol P engine due to this. Without the check valve the oil drains back down into the sump and every time you start it, it is a dry start. This was an obvious oversight/design flaw by Nissan early on in the G60's By 1966 it had been re-designed. As such we felt it critical to use the later style oil filter base with the check valve. Yet, to keep it authentic for the early year of the truck we went for retaining the early style oil filter housing and center rod. It is slightly different then the later style. The oil filter housings are made from pot metal/alloy and I think I will remove this one, polish it up with the wire brush and clear coat to finish it off. As you see it the housing base it simply sand blasted and is in raw form. I had the pin and guts for the oil filter housing zinc plated to re-new the parts. I plan on having the stock sticker found on the housing replicated to finish it off. Little details that I feel make all the difference in a restoration like this.

In addition to this we upgraded the t-case nose cone and speedo pinion drive gear and flange in the t-case. Early Patrols (pre-1966) came with a very sub-standard pinion on the speedo and it was set up in front of the t-case (before free wheeling hubs) plus was a "crush" sleeve design which honestly plain sucked. By 1966 Nissan had re-designed this to correct the crappy design, a major improvement being a splined gear for the pinion which rides behind the 4wd drive flange in the t-case nose cone. Uh-ya, f/w hubs are no probs now! Early on f/w hubs were simply not something offered so pulling the speedo pinion from the very front of the t-case worked but f/w hubs are being used on this truck so it had to be upgraded. We felt it was an important upgrade not just for the use of f/w hubs but also in the overall design of the speedo & it's pinion which obviously Nissan did too so we upgraded the t-case and speedo pinion to the post-66 style. Not 100% correct for any anal pursuists out there but upgrades we felt important and needed in this project. Bonus for us was the parts we used are suited for 7.50 tires due to speedo pinion teeth count while the trashed and worn out one we had from the 64 was for 6.00 tires. We are running 7.50's on this truck.

Well, starter and generator are fully rebuilt and re-furbished. Down to the last washer!

and finally mounted up on the engine

I guess didn't take any pics of the generator yet. I will today. Water pump is also permanently mounted up on the engine along with it's pulley installed. Geez, that means I am just about ready to install this 50yr old NOS fan belt!

RMP&O said:
Seen that, myself not interested. No worries on the hijack, always on the look out for good Patrols!


XZL tires mounted up to 16" original wheels. Yup this is the color that the Patrol is going to be!

What size are those tires? They look great.

And where you sourced them from? They look great. Wish your other pictures hadn't disappeared.
Last edited: Apr 7, 2015

scrapdaddy said:
And where you sourced them from? They look great. Wish your other pictures hadn't disappeared.
Click to expand...

I will get pics worked out. I been using facebook to host them for awhile now and it sucks. Just need to get a photobucket account or whatever.

The 64 is back in my shop and I have already started in on assembly.

It was tough for the body guy because of how Nissan painted these things. Basically they painted the body that you see on a jig on the assembly line. The body would then be lowered down onto the rolling chassis. That means the hardware, nuts and bolts all had to be painted. Along with seams sealed up with sealer. Believe it or not Nissan actually sealed the trans hump with seam sealer. We are going for as much of an original as we can get on this truck. So, that meant we wanted to replicate the way Nissan had painted these trucks back in the day.


The color for the truck was taken from these pictures. Originally a more deep solid green was discussed. That being a fairly common Patrol color, Roy Rogers green as it is known because the advertising Roy did featured his green Patrol. A lot of Patrols out there that color though and the owner wanted something different but still wanted green. I showed him these pics and he liked the color. Problem is, this is not a Patrol color and as such I had no data on it. Why Nissan shows the truck with this color I do not know. It is possible it is simply old school photoshop and the color was altered for the brochure. Who knows really!? We found a later Nissan color that seemed to match fairly close. That along with some other Patrol colors including "dragon green" & Roy Rogers green were sprayed and sent to the owner. He decided on this color.

Personally I think it looks great and depending on the light it looks more green or grey, under HID lights it even looks olive drab green.

Funnest part of the resto is happening now! Bolting the finished items on is awesome and it is finally coming around.

The leaf springs are giving a solid 3" of lift. That is more than we wanted. There is not a ton of weight left to add so it will not drop much more. I actually like it though even with the skinny tires and 3+" of lift. However, the owner wants to lower the truck so I will be getting new leaf springs more in the 1" max lift range. I will be using the lifted leaves on the 64 now on my 68. I want the 68 lifted and will run 33" tires on it so these springs will work good for that truck. Although I may pull a leaf or two from the rear pack to drop it down maybe 1/2-1".

Absolutely gorgeous! Stock or not, I love that color!

Probably make some of you Cruiser guys happy to know (or upset depending) but we used FJ40 body mounts on the truck. Can't get the originals and only recently some have become available but it was to late for this truck.

I doubt you'll get any complaints from......anyone!

Working away on this truck lately. Plan is by the end of this winter for it to be done.

Got to tap every hole on the truck before assembling. 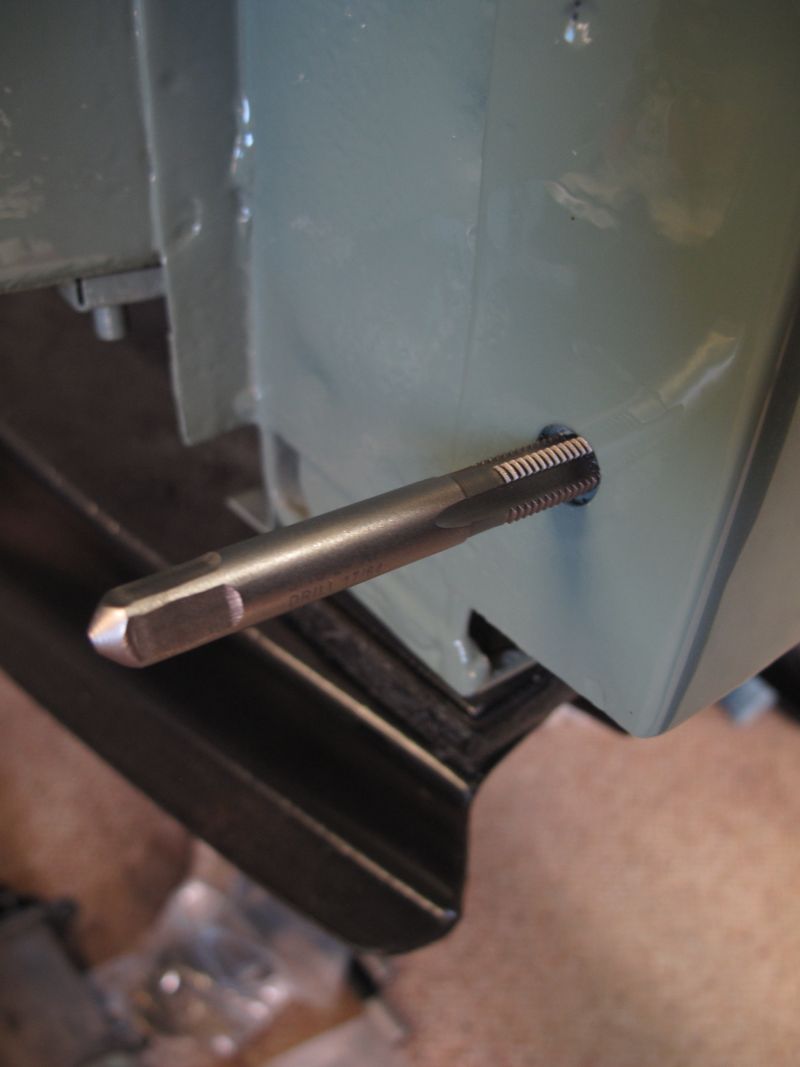 Got the pedals all in, being a 1964 this truck the clutch and throttle is all mechanical linkages. 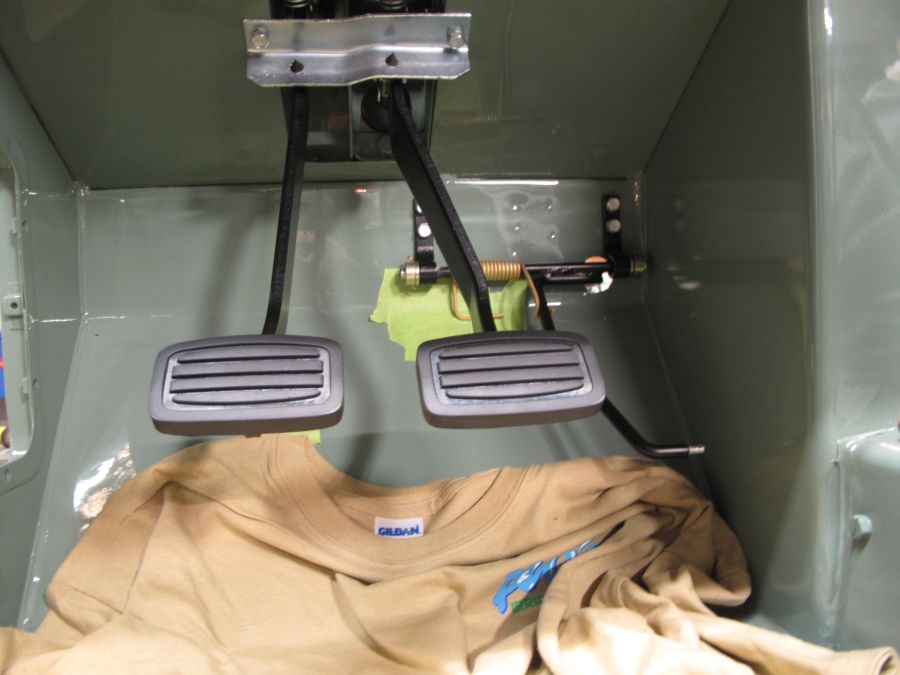 This is part of the clutch rod linkage 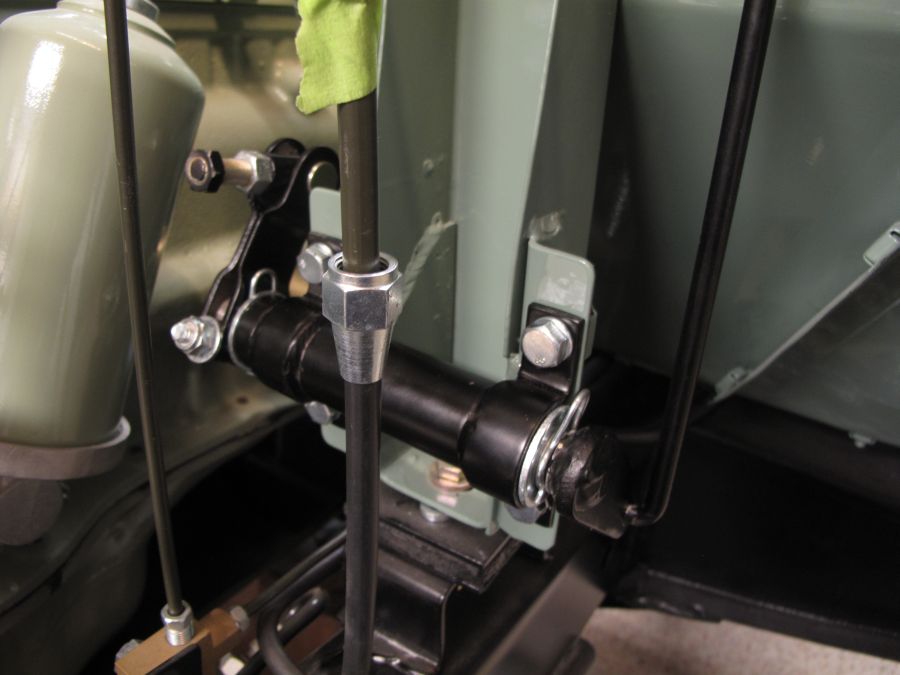 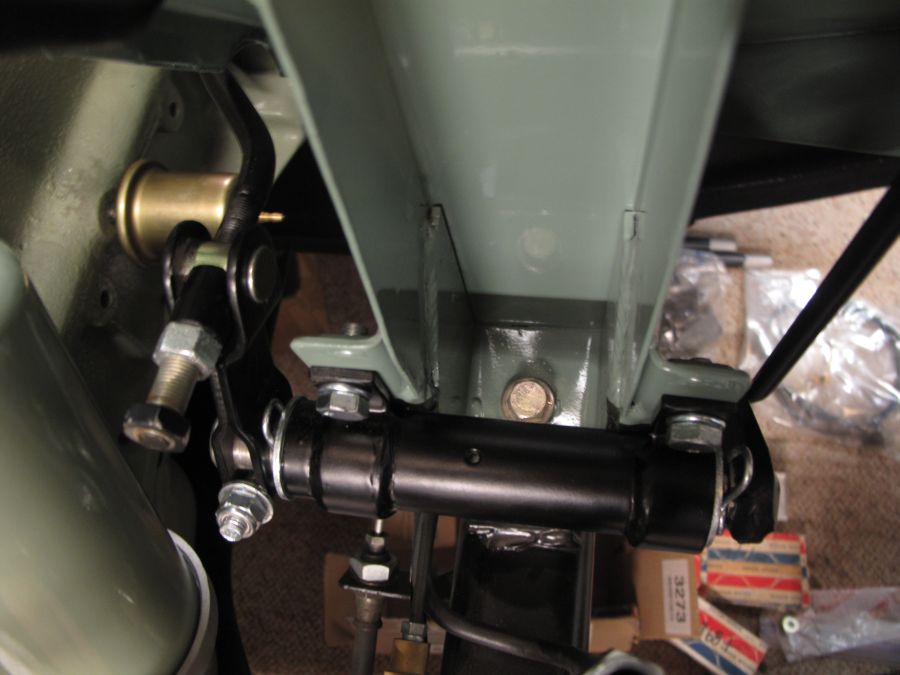 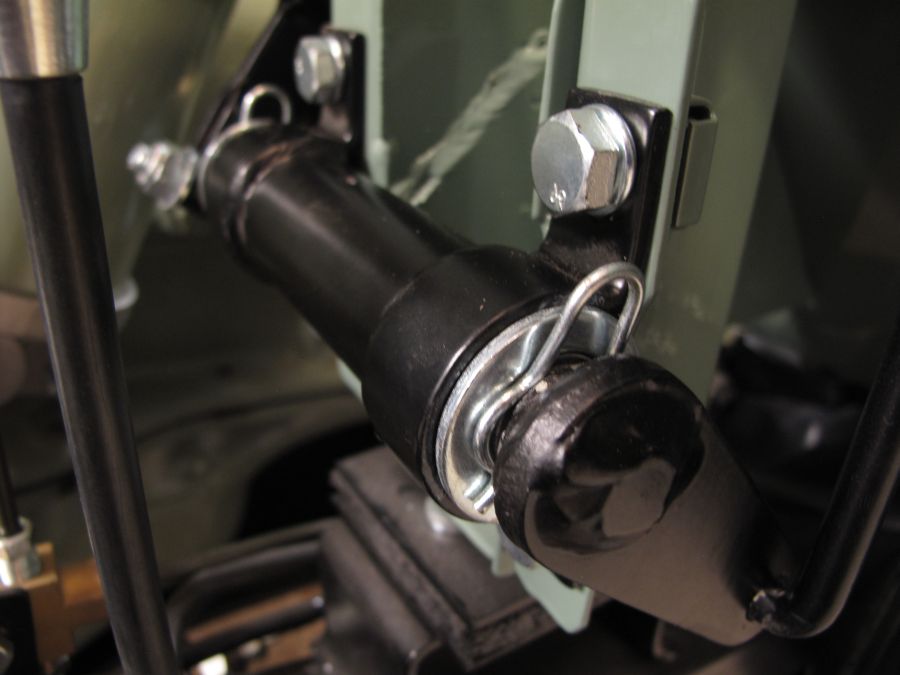 This is a heater defrost vent, all the original hardware on this truck was sent out for plating. So pretty much every nut, bolt, washer, spring, rod and you name it has been restored. Even hardware that is painted was plated prior to painting. 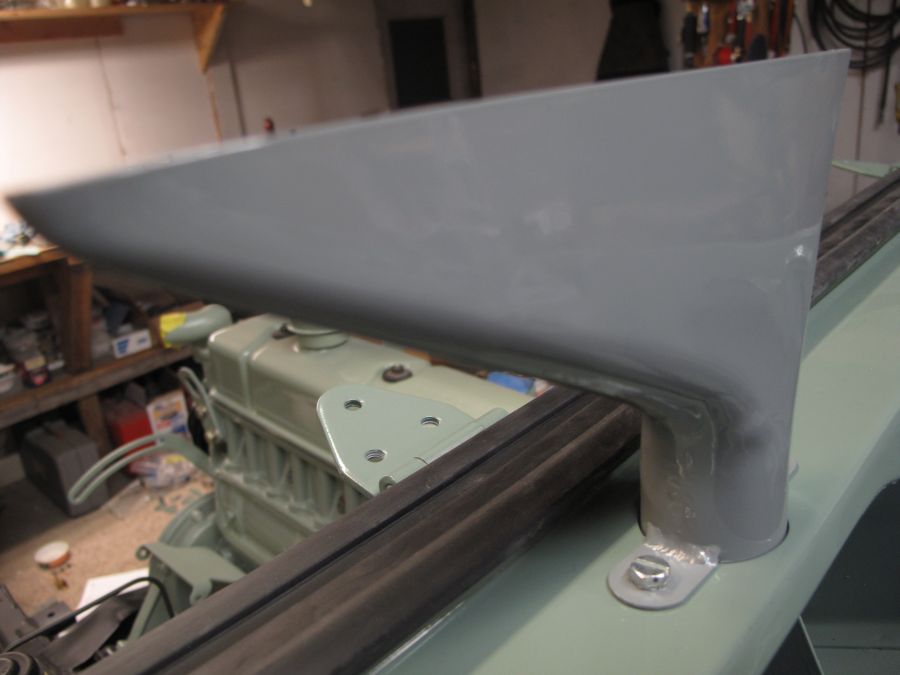 Here is the throttle linkage, these are all original parts that have been restored. 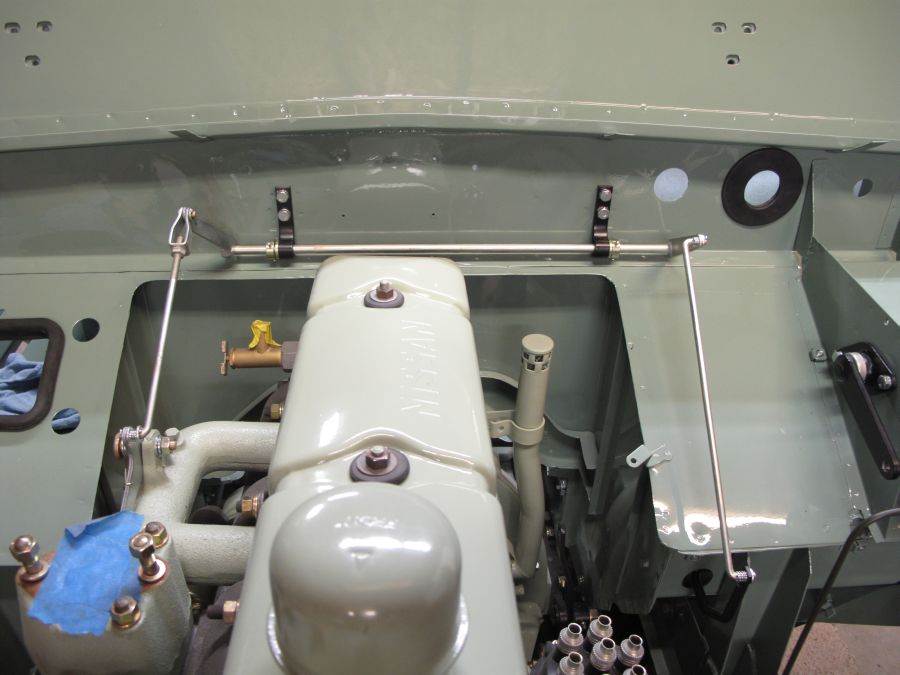 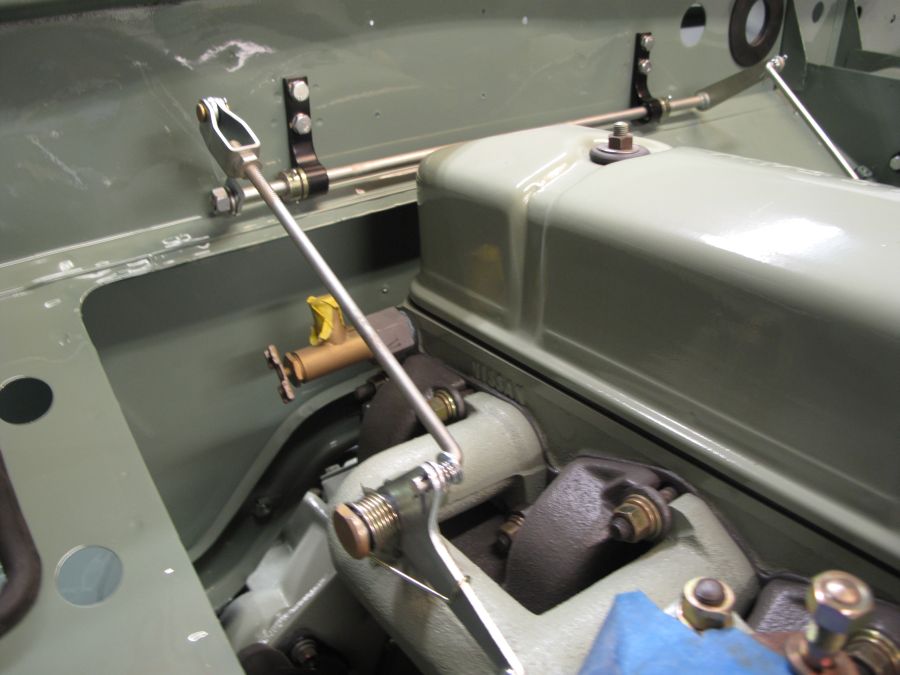 Notice the "dp" on the bolt heads. Pretty much every bolt on these trucks has this on it, which is why we decided to restore it all and use over replacing with new hardware. 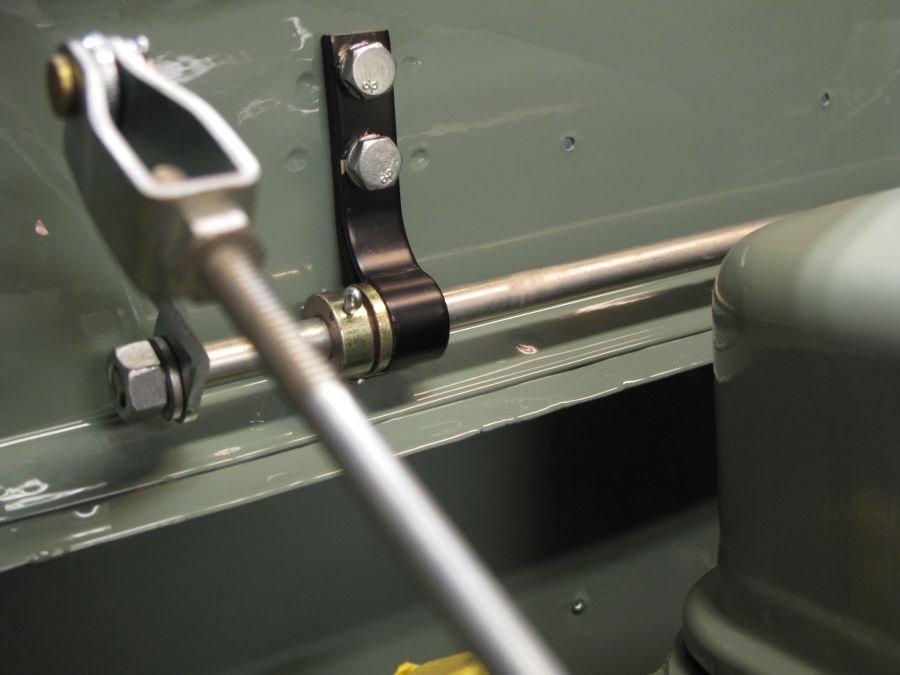 Clutch linkage and master cylinder. Bowl on the MC cracked during assembly, super old and dry. Got a couple replacements in hand. 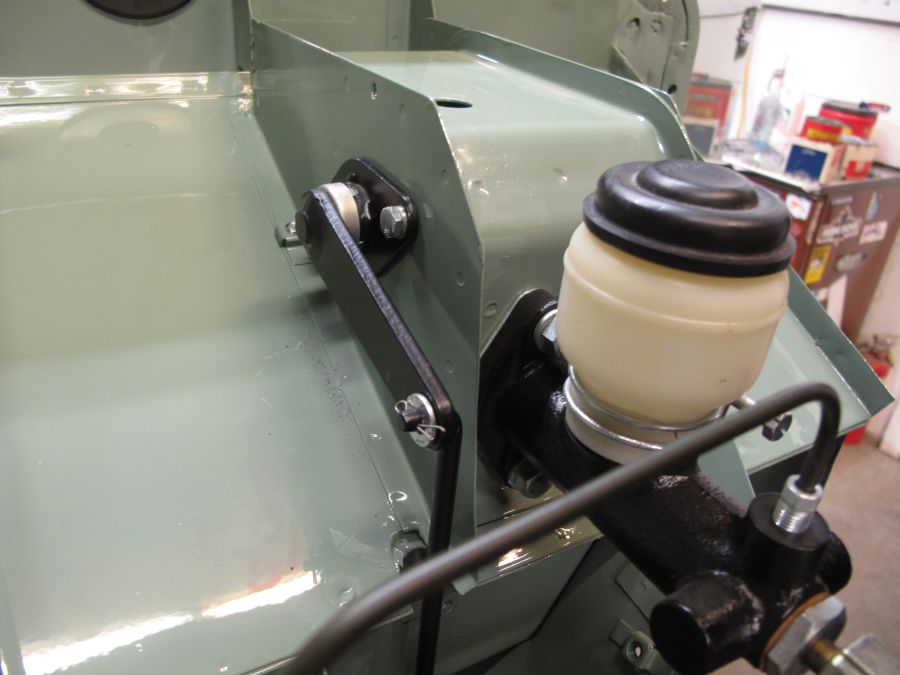