I rolled my 86 turboed 4runner in 2004 at Paragon. I soon realized that my 4runner that had served me well for so long had met it's demise without a straight panel on the entire vehicle and a frame that had become rather soft in the rear I sent it off to be parted out to Mike Fox because I couldn't bear to do it myself after having it for so long.
Then came looking for another rig. I had always liked the older crusiers with the open tops and good looks but didn't find that many cheep rigs on the east coast. I found a couple of mini trucks of various years. Then an email came over the YT list of an 72 needing some work but running. I was off running the next mourning I drove up to hew Hampshire a little less than two hours north to find a running but cosmetically challenged 40 series. The older gentlemen Clint had purchased it new. He told me of trips to new york and around the region it was his favorite toy for a lot of years. I bought it on the spot mostly because it ran and the rear deck was in almost mint shape.

Having just spent two years as a spotter in NEUROC with Foxfab4x4.com I had seen quite the collection of carnage both in the comp rig and competitors rigs so I was looking to make my next trail rig safer and hopefully perform well. I decided that I could shoehorn 37" tires under my cruiser without a lift after taking some initial measurement.
On the front of the crusier I simply slid the front fender up to the hood and made a filler panel to fill the hole that was left from moving the fender up. For the rear of the crusier the fenders were replaced with 12Guage sheet metal bent around by the rear of the cruiser by heating and bending around on the cruiser. For the inner fenders they are bent like the originals only taller up to the bottom of the rail for the top. The outsides are cut to look like stock but taller to clear the tires.
The rails for the original hard top but it was rather weathered and was held together by not much more than silicone and iron oxide. I purchased a used fast track and it leaks a little less inside but I can take it off by myself.
However I soon realized that although the rear floor was in great shape the drivers side floor was in poor shape and there such crusier rot problems. With a lot of help from a good friend Matt and some of his former crusier my tub looked like a cruiser again.

All of this work has been done in at lest part by a good friend of mine Matt. Thanks.
Up next is a set of sliders and a 2F to replace the original F motor that has 280K+ on it. 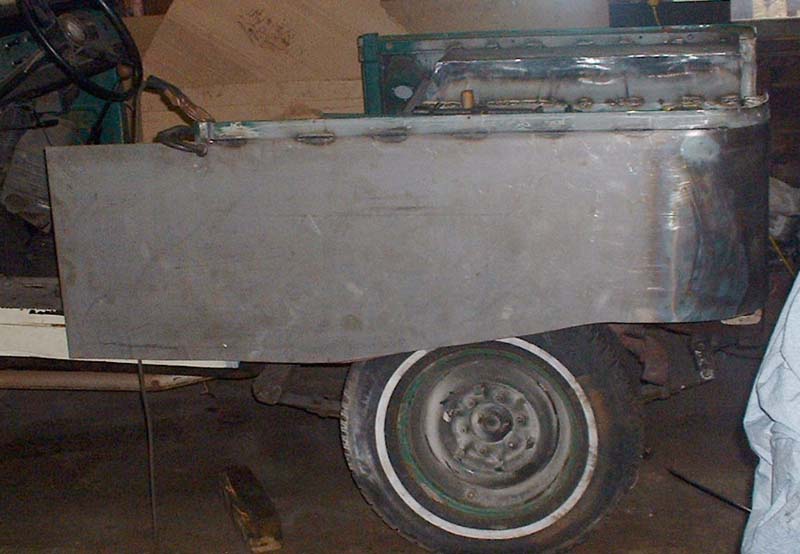 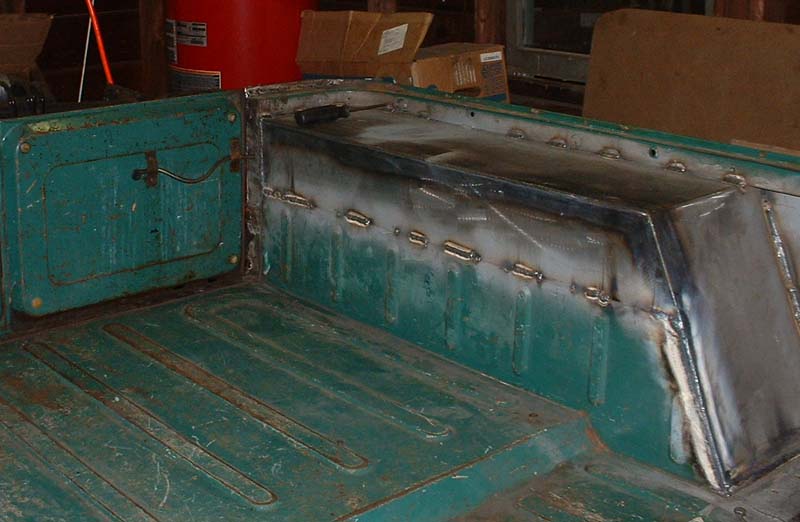 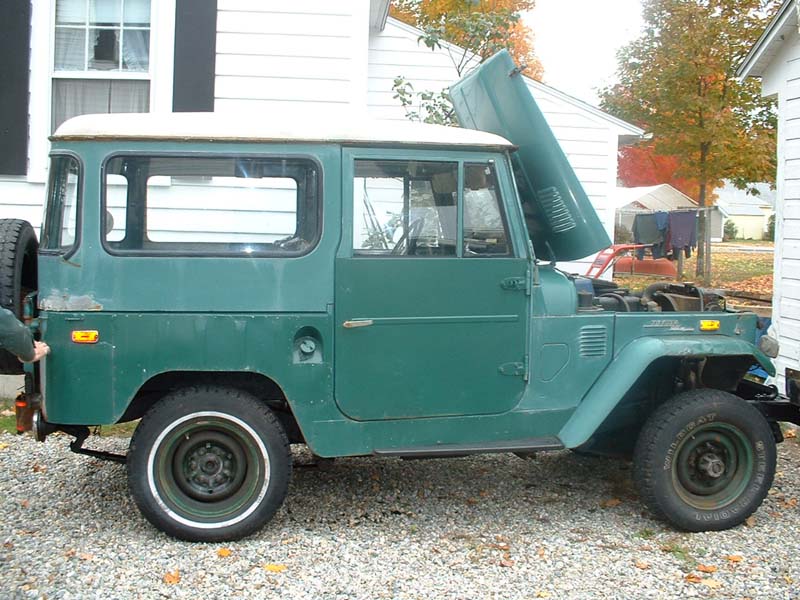 This is the adapter I machined from 3/4" 6061. It's similar to the extreme bends adapter. For the tranny install I followed the extreme bends directions other than I used 1/2-13 bolts to hold the transfer case on. The install went smoothly I had the flywheel machined and bought an 11" clutch disc for a Chevy and bolted it all together. I was able to switch the drive shafts front to rear I had flipped rear springs and stock front springs at that point. 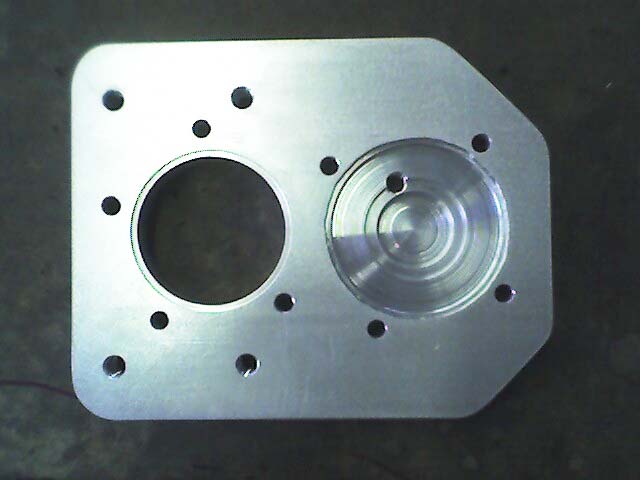 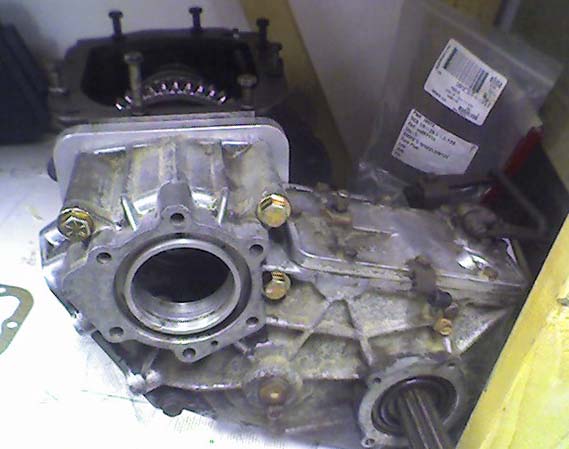 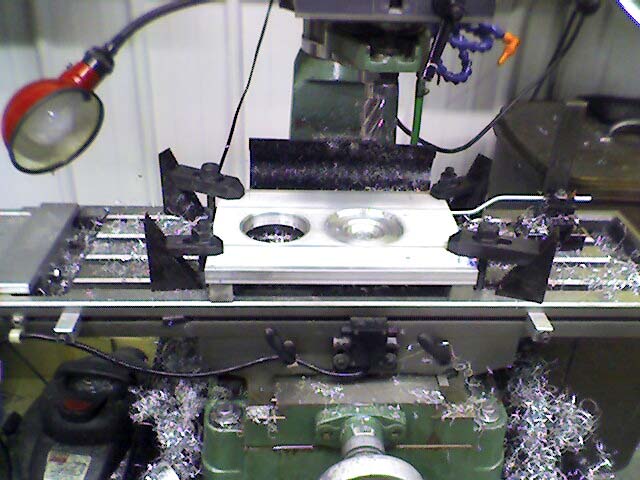 For the steering that was so old and weathered I wanted something different again and after reading about some people using astro steering boxed i picked one up from a yard and during the winter Matt and I went at it and after moving everything out of the way mounted the box where it needed to be to get a good drag link angle with the front springs flipped.
Unfortunately by flipping the front springs the box had to go into the front cross member and a brace had to be made. For the motor mount I shortened the mount on the driverside to clear the steering shaft. I shortened it about an inch and re drilled the mounts and used a rear cruiser mount. For the pump I used an hydro boost pump that has been drilled and shimmed. For lines I used 96 Chevy blazer lines and rebent them slightly. Other than that it's a standard Saginaw swap because the astro box is a Saginaw box but the pitman arm swings the other way. The box is up on the frame rail protected and the system has great power.Here are some pics of the astro swap. For the astro swap the basics are the same as a standard Saginaw swap.
The only thing I found challenging was I had to move the radiator up to almost the hood and over to clear steering box. I used an universal hose to connect the upper radiator hose and the lower one I replace with a stock replacement from napa it was trimable. If I hadn't just replaced the stock radiator I would have found a different radiator that was shorter. and the fit would of been easier. 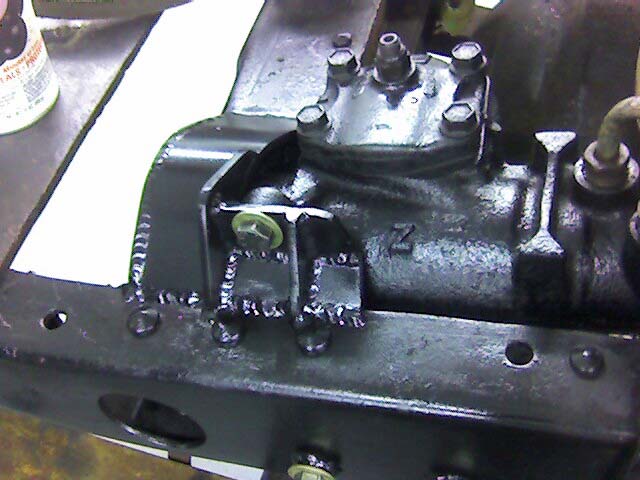 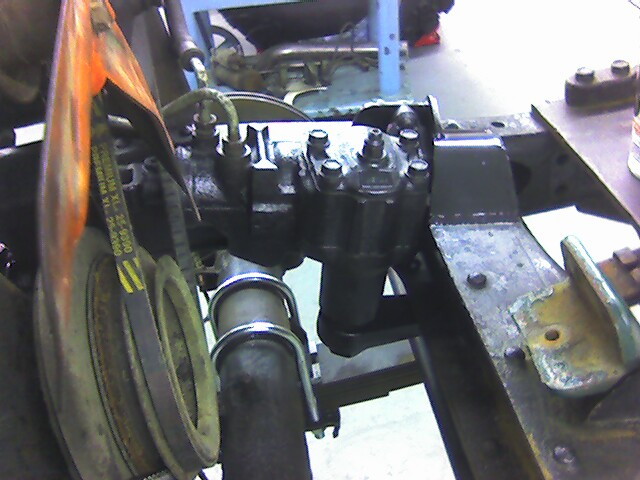 Some pics of the cage. The cage is tied to the frame on the rear six pints and the front A pillar will be tied into the sliders and frame soon. It's missing from these pics but the seats are also mounted to the cage and I have my hilift mounted behind the seats with a really huge nut. 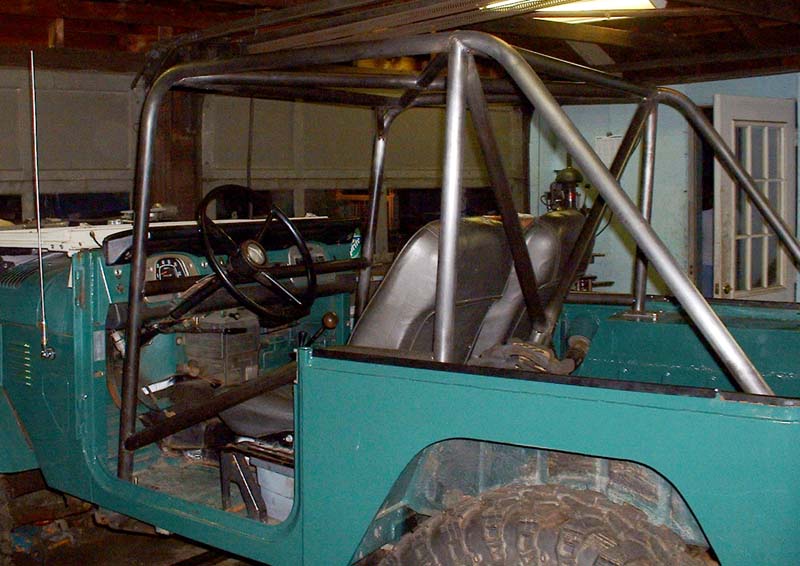 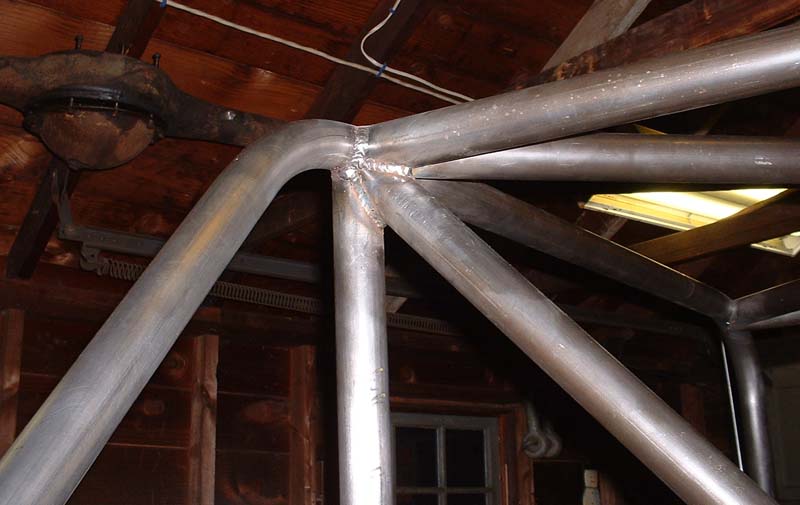 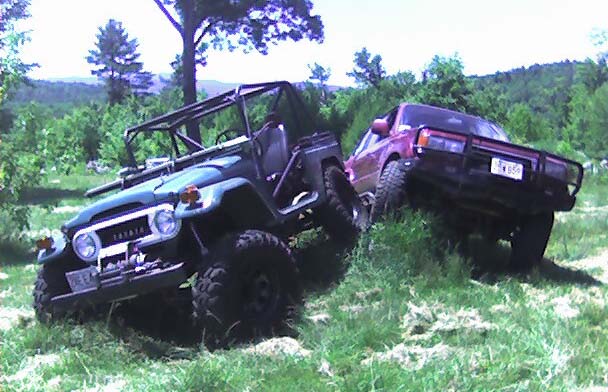 For disk brakes I used vented cruiser rotors for the front with V6 calipers and fresh knuckle bearings and mini outers.
The rear I used solid mini rotors and calipers. I made the bracket after seeing one. They work great the cruiser will stop all four 37" at any time if need be.
For a master I'm running an 13/16 from a 85 4runner along with the matching booster.
For the mounts I used 1/4" plate with 3/8" welded on for the threaded section.
For the tie rods I used spacers to keep using the stock TRE's.
I will be going to FJ60 TRE's soon. 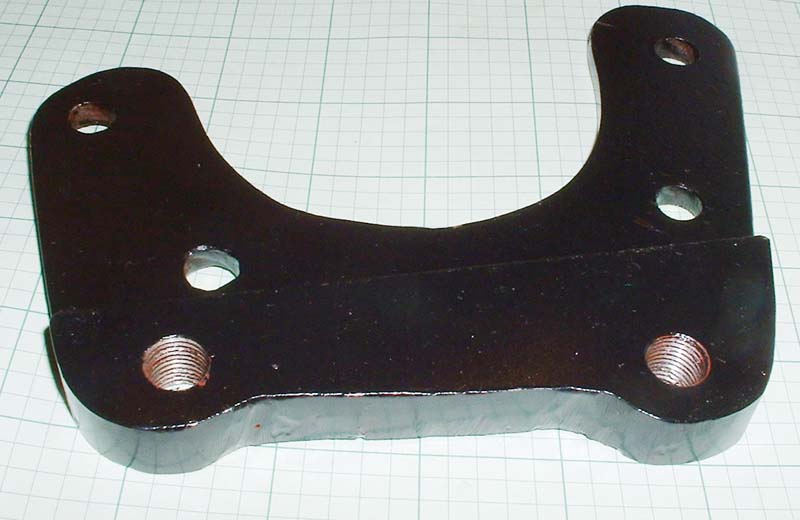 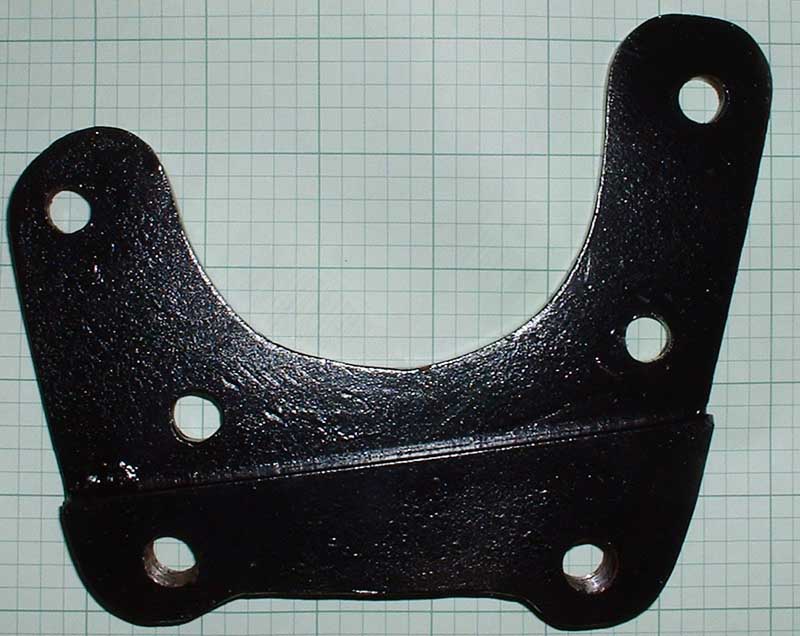 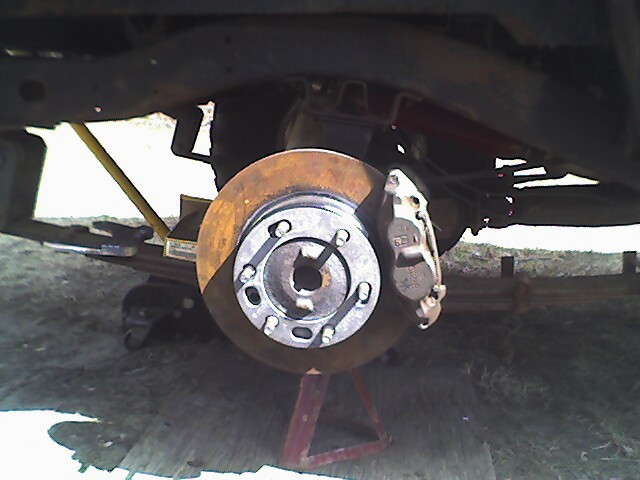 These are a couple of the pics of tying the cage into the frame. It was a lot of extra work but the cruiser is really solid in the rear.

The full specs of the rig as as of now are flipped rear 2.5" springs and new shackles. The front has stock springs and new shackles . A CB to keep in contact with others on the trail mounted to the console with some nutserts, seats are from a later model cruiser. The wheels are us wheels 17X8" with 3.5" backspacing. The tires are 37" IROK's. I have a kayline top because the hardtop was a rusted out pos. The rear diff is an 4:11 fine spline from an 80Series with a lock right, my drive shafts are heavy wall 3/16" so I can grind them whenever I need to and not worry about it. I have a header with a 2" exhaust with a cheep cherry bomb exiting between the frame and the body and out behind the rear wheel. My carb is stock rebuilt by me and tuned by Mbrantley to run great with a HEI. I also relocated the battery to the frame next to the starter that is a gear reduction from a later cruiser to get it lower and out of my way of the york.

Hope you enjoy the pics and info Pls ask questions if you have them. 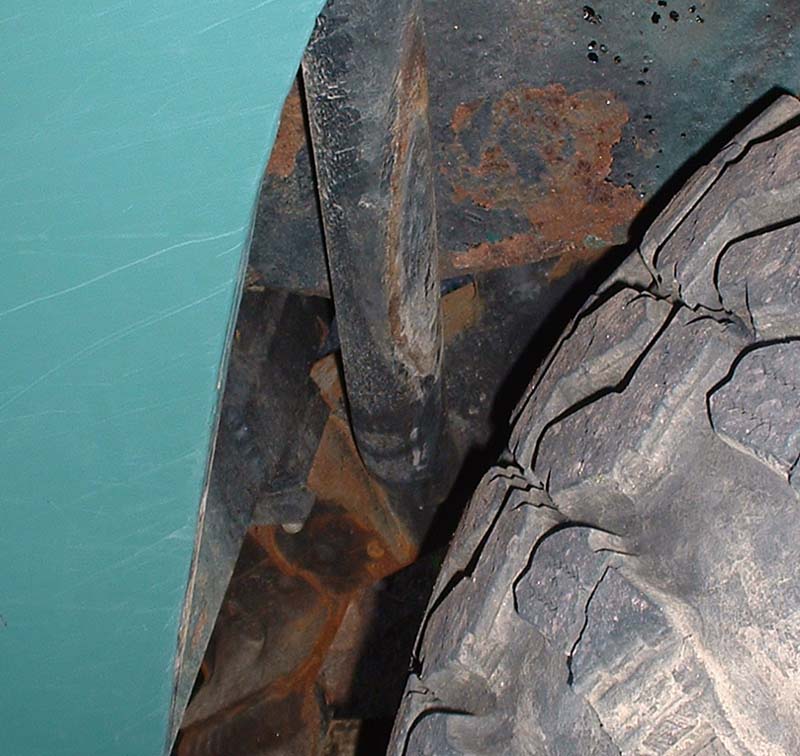 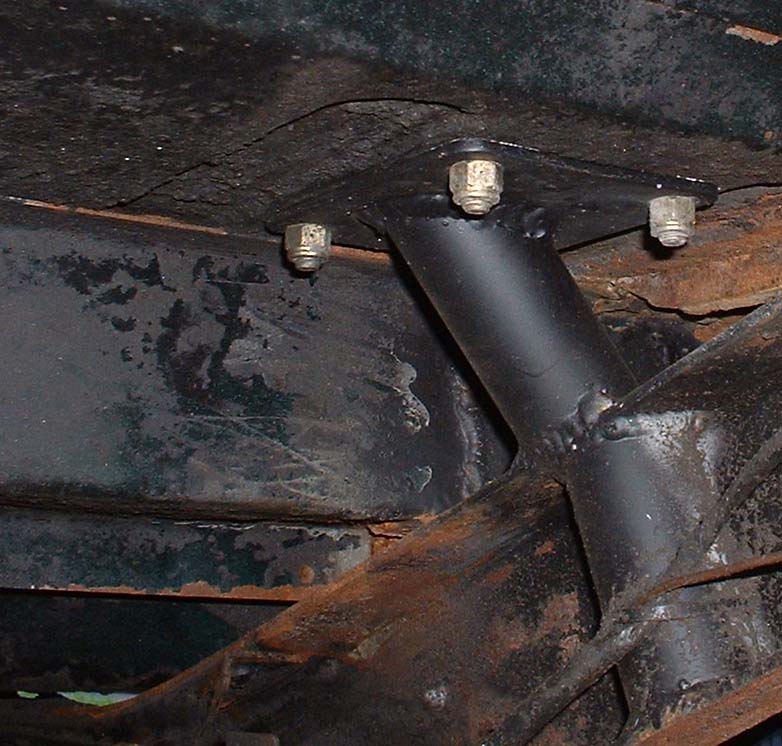 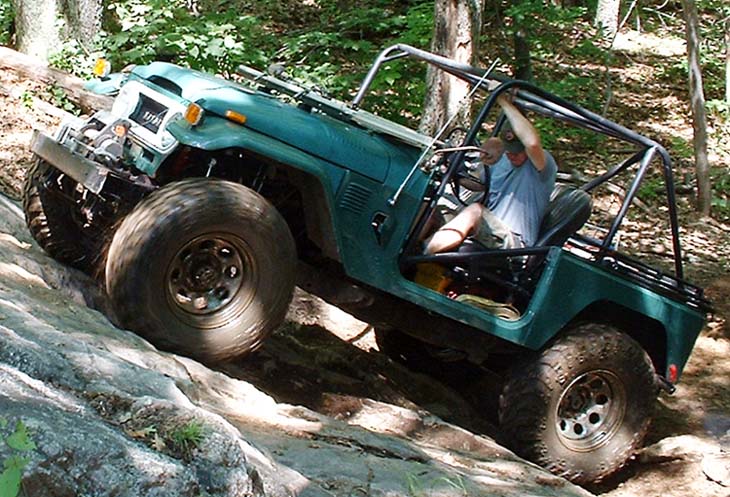 No I don't have any plans to make the brake mounts. they were to much work. It seems like one of the manufactures would make them. You could email http://www.ruffstuffspecialties.com/catalog/index.php and see if they are interested in making them.
My ROTM http://forum.ih8mud.com/showthread.php?t=169622

Very cool 40 you have built there and nice fab work. I like the low center of gravity and big meats. Looking forward to seeing you wheel and watching your creation in action.

Do you have any pics of how you tied the cage to the frame? I plan on doing the same with my cage and would be interested to see your work.

Great job. Looks like you are not much into body lift. I like the slammed down looks. I did the same thing with mine. Fender lift, not body.... Nice looking Cruiser...

Location
In a van, down by the river


"Is it being prepared to do the right thing, whatever the cost. Isn't that what makes a man?"

"Sure, that and a pair of testicles."

You really should have some kind of lift. The frame hangs low.
<>< Hardcore Rock Crawling 80. Marks Crawl Box, 5.29's, 40" Iroks, Hydro Assist
88 Samurai Buggy
Weld it. Break it. Weld it. Break it. Rock crawling is fun.
Live Free & Wheel
The worst day of rockcrawling is better than the best day at work!

I have used 2.5" springs in the rear and stocks on the front. I will be adding a little lift on the front to even it out. The frame is low compared to most other trucks running similar size tires but It's really stable. When it gets some sliders the frame wont look so big.
My ROTM http://forum.ih8mud.com/showthread.php?t=169622

It has been really cool to help build up this 40. All of the slight tweaks that Mark has made to some normal mods are what make this thing work great.

That last pic in post #6 that's not at Kina's is it?
<>< Hardcore Rock Crawling 80. Marks Crawl Box, 5.29's, 40" Iroks, Hydro Assist
88 Samurai Buggy
Weld it. Break it. Weld it. Break it. Rock crawling is fun.
Live Free & Wheel
The worst day of rockcrawling is better than the best day at work!

No it's at MaBell I got rejected I couldn't hook up without a front locker. Maybe next year.
My ROTM http://forum.ih8mud.com/showthread.php?t=169622

It seems like you kept it low on purpose. Big tires minimal lift theory. If I read between the lines it seems like you learned that from being a spotter in NEUROC. Do you think it is more stable and wheels better that way?
<>< Hardcore Rock Crawling 80. Marks Crawl Box, 5.29's, 40" Iroks, Hydro Assist
88 Samurai Buggy
Weld it. Break it. Weld it. Break it. Rock crawling is fun.
Live Free & Wheel
The worst day of rockcrawling is better than the best day at work!

I learned a lot from the two years I spotted for faxfab. I tried to keep the height down to make it more stable on side hills and easier to get inspected. Weight distribution was also something I've tried to keep in mind. I don't have a rear tire carrier because of the effect it has on climbing. I mounted my battery to the frame instead of using the cruiser battery stand. I store my tools and spares under my seat instead of the back to keep the weight low and out of the back.
However one of the down sides to all this is that I'm a lot closer to the rocks and I drag myself quite a bit. Overall I think it wheels great. I don't have any complaints.
My ROTM http://forum.ih8mud.com/showthread.php?t=169622
You must log in or register to reply here.