Thought I'd share my progress with making new brackets for my Mazda MX6 seats that I bought years ago for my 62. The brackets I had made before made the seats sit way too high (to the point where my head brushed the headliner when I'd be driving), so I wanted to make something to not only lose a couple inches in height, but as practice fabricating.

First, here are the original brackets. I had a fab shop in Lynnwood, WA make them. Outstanding workmanship, but I got tired of sitting so damn high. 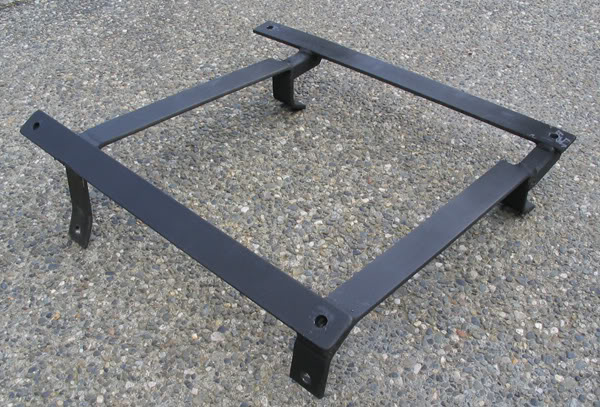 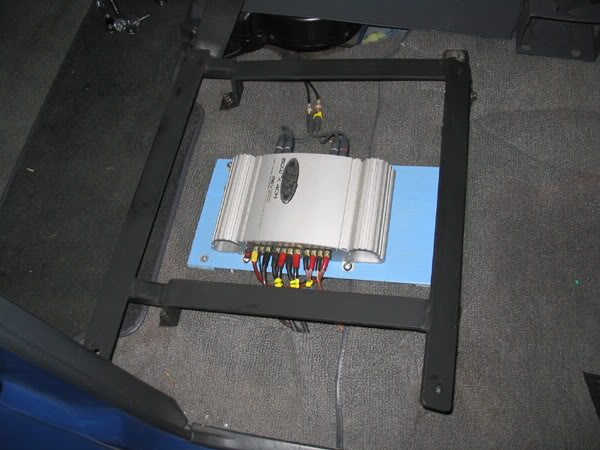 The driver's seat on one of the early brackets. 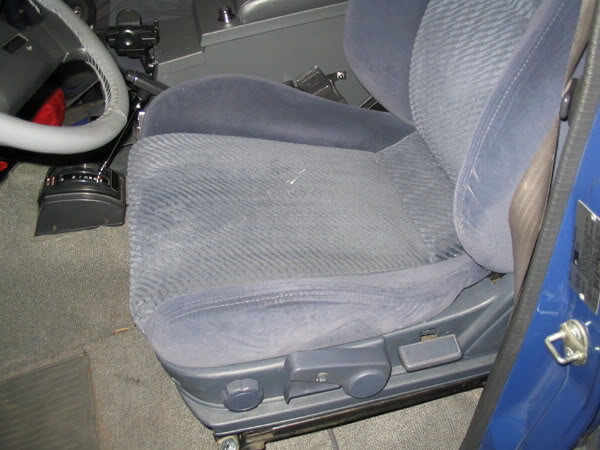 Here's what I've got so far for my new brackets. These are going to be a two-piece setup with separate front and rear brackets. It's all 1/4" stock with some 2"x2" 1/8" wall tubing for the rears. I went more for strength and rigidity than looks (obviously), but overall I'm satisfied with how they're coming out so far. Here's the first stage of the front passenger seat bracket tacked together (with the inboard tongue already welded in place). 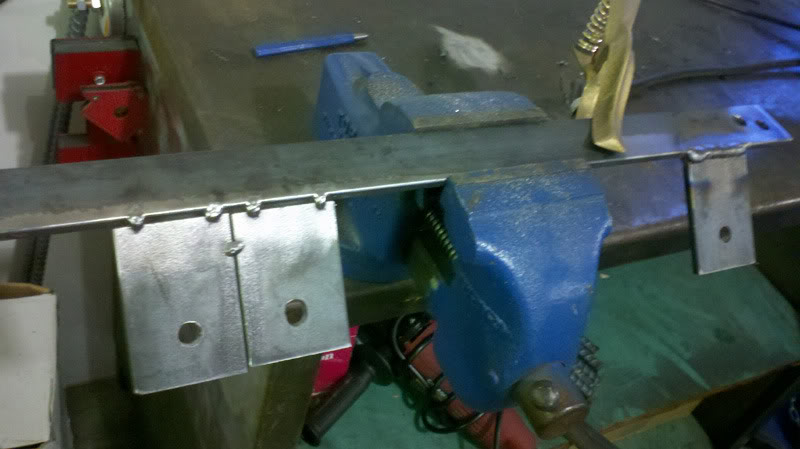 Same thing from the bottom, with the bead on the doubled-up tongue ground down and blended. Good and solid so far. At this point I installed it in the truck and installed the seat to it (with the back propped up by a few scrap pieces). Felt solid as a rock, but it just looked like it might not hold up in a collision or (God forbid) a rollover. 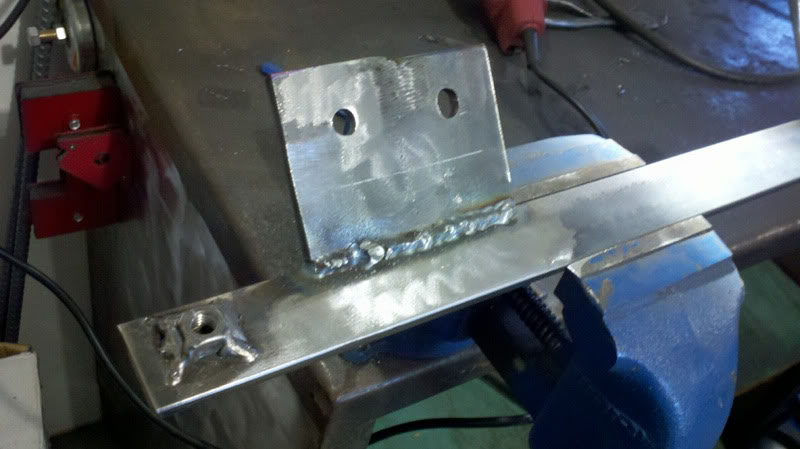 The strongest geometric shape is a triangle, so that's basically what I formed with extra pieces welded between the crossmember and tongues. I'm pretty happy with how my beads are starting to look now that I'm getting some more practice in. The top bead is sloppy because I was standing in an awkward position to hold the gun, but it's solid and has good penetration, so again, I'm happy. I ran out of wire almost halfway through the bottom bead (damnit) so I had to install another spool and keep going. Other than that, I'm pretty happy with how my welding skills are improving. 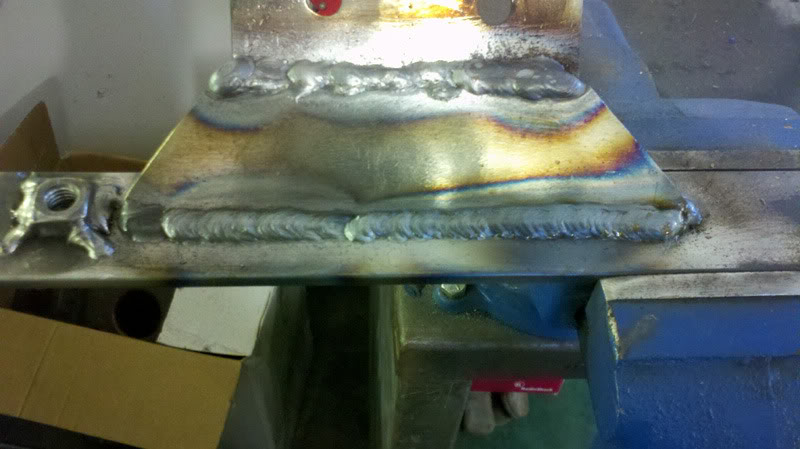 Front bracket finished with corners ground down (so clothes and hands don't snag sharp edges in the truck) and the extra gussets welded into place. For s***s and giggles, I blended the welds on the larger gusset, but decided not to for the smaller one (and won't for the driver's side), since it's not like I'm gaining anything by grinding down beads that no one can see when the seats are installed. 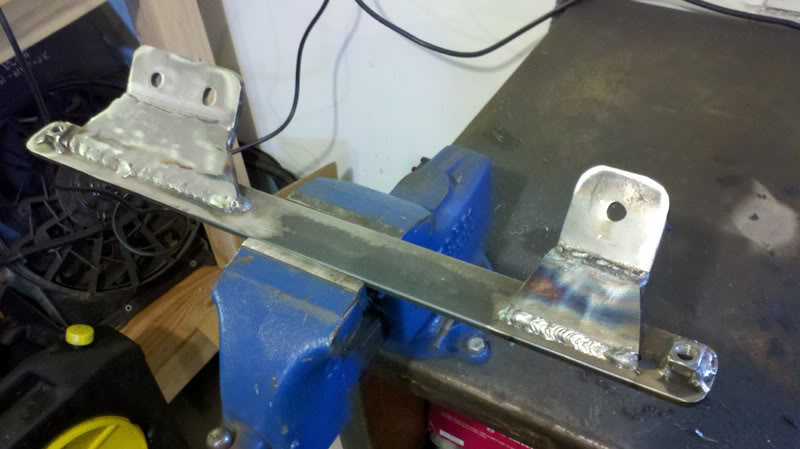 Test fit of the complete assembly, and so far it's looking good. My only concern now is the measurements being thrown off slightly when I have carpet in again, but I don't see it being a big issue since I won't have that thick-ass Lytherm padding underneath anymore. I also had to "massage" the sheet metal on that channel at the inboard end of the bracket (no way around that due to the width of the seat rails). Wish I had an air hammer so that I could do a little better job there. 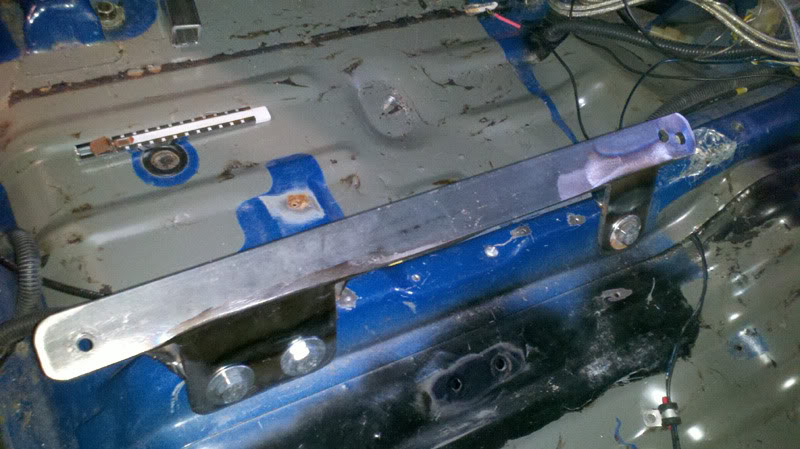 At a bit of an impasse on how to do up the rear brackets. So far all I've gotten is the 2"x2" tubing cut, drilled and welded the nuts in place. This pic will give you an idea just how wide these damn things are. But they're damn comfortable, and I'm damn stubborn so I'm determined to use these seats. And since I'm doing them up as a bolt-in option, I'm still free to install different seats in the future if I want to
Anyway, the rear brackets are going to be harder to do up, since I can't just place everything and tack it together due to the close quarters and how close I'll be to the (flammable) seat upholstery. Looks like I'm going to have to do some very accurate cutting and bending to get everything to come together right and weld it all outside of the truck. 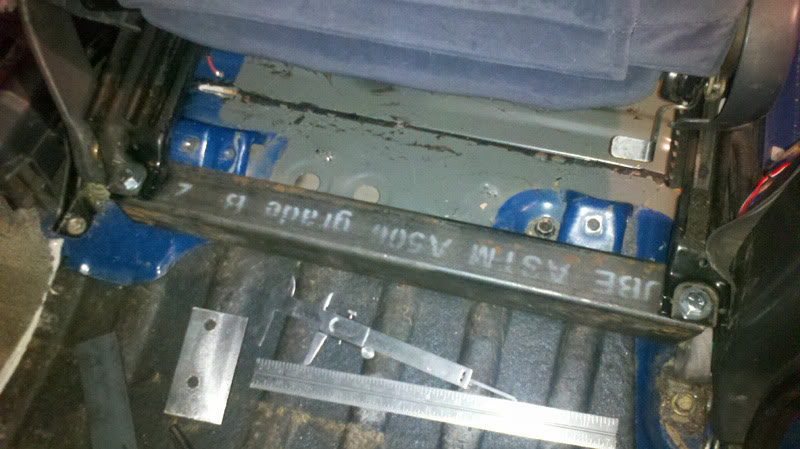 I think I have a game plan for these rear brackets. Problem is I won't know for sure if it'll work until I have the brackets all welded together and can test fit the whole assembly. First step was to find the right angle that the (factory) bolt-down locations sit in relation to the floor pan. Turned out to be 30 degrees, in case anyone's curious. So I cut three tongues out of the 2"x1/4" stock, used a cutting disc to (carefully) notch them enough to let me heat them up with my MAPP torch and bend them each to a 30-degree angle. Measured for the bolt locations in relation to the creases, drilled, and test fit. So far so good.

I had to be careful with the "double" tongue to make sure that the creases and holes lined up correctly before welding it together. Once that was good I burned everything in place and blended the welds down to make it all one solid piece. My welds are getting better and better the more practice I get. Pretty pleased with myself. 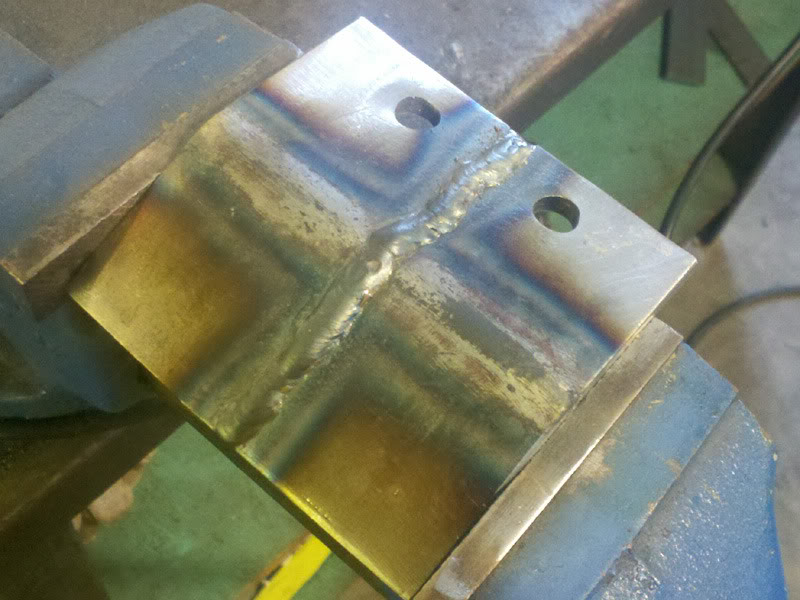 After blending the welds. 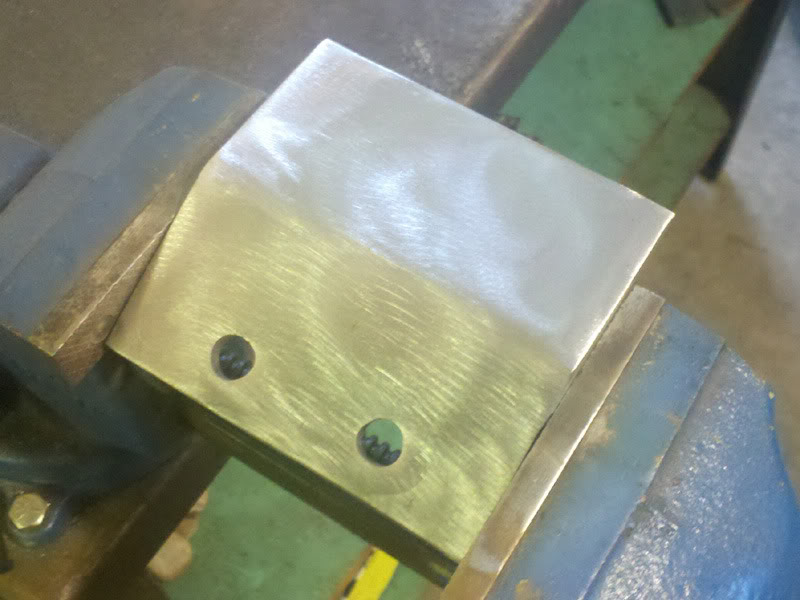 The notching created a weak point on the tongues, and since it's crucial that they be able to maintain their angle under all the forces that'll be put on them, I used my welder to fill in the notches. Did the same on the smaller tongue as well. 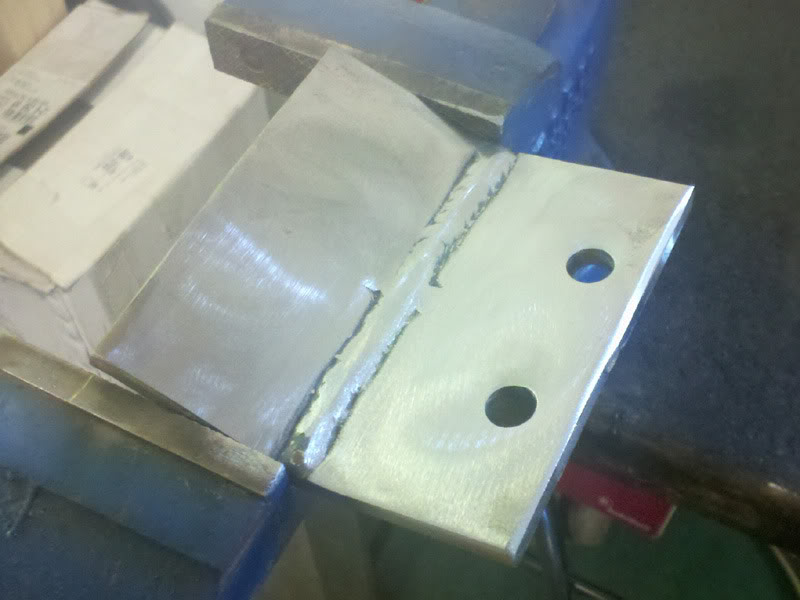 The tongues installed (angle came out perfectly) and ready to measure the 2"x2" tubing so they can be welded together. More to come later. 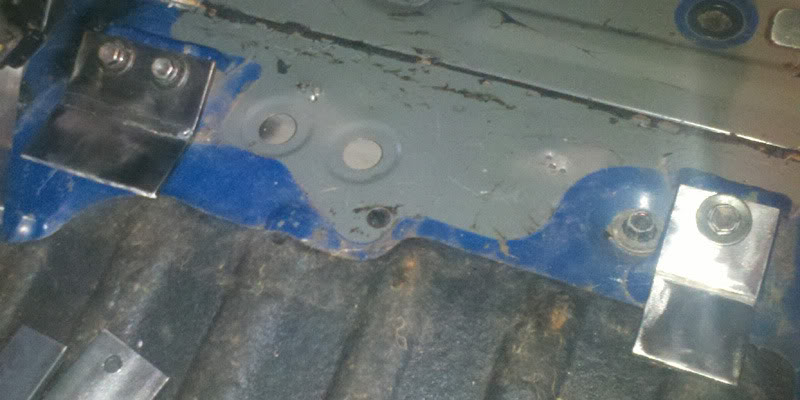 This is turning out to be a pretty exciting project for me since this is my first serious fabrication project. In the few days since I've started I can already tell my welding and grinding skills have improved a great deal, and I'm learning alot of things that'll help me with future projects.

Last update and then I'm callin it done for the weekend. The rear bracket is done except for some beefing up that I want to do before final installation. I didn't want to tack anything together while it was in the truck since my space in back was so limited, so I had to measure carefully and test fit a few times as I got it together.

Tongues tacked into place on the tubing. 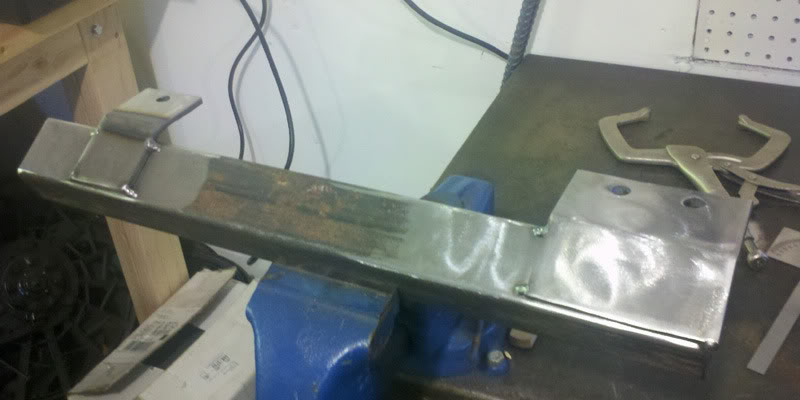 The bracket welded together and test fit in the truck. The fit was damn near 100%. Just had to file out a couple holes on the tongues a bit and it's nearly dead-on. Very curious to see how well it all fits once there's carpet in place. 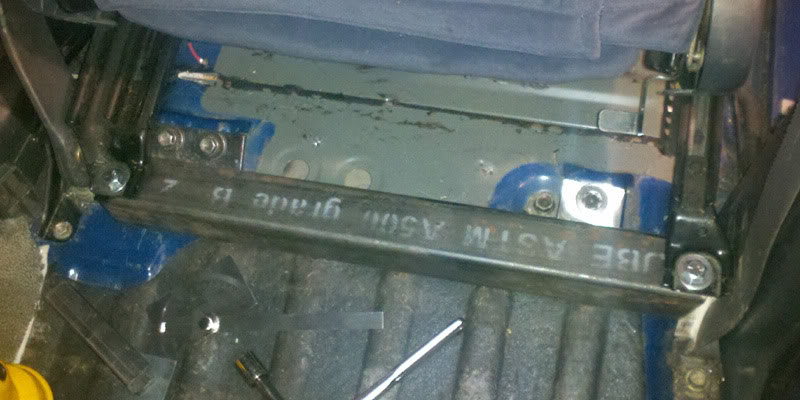 Gotta go TDY tomorrow but hopefully later on in the week I can get the passenger side done and start on the driver's side.

Looks good Sporky! Your welding has come a long ways.

My idea for beefing up the rear brackets worked perfectly. Took some fancy cutting, but Overall it worked out great. Thank God for having a dual compound miter saw.

The vertical beefup plates used for the double width tongue 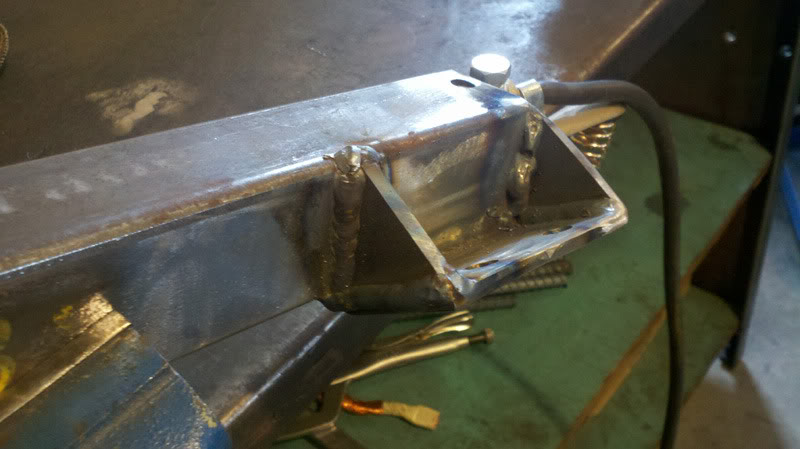 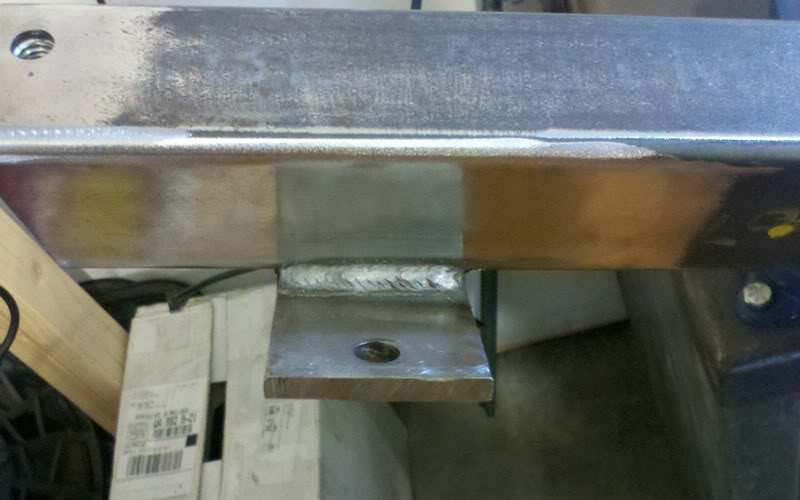 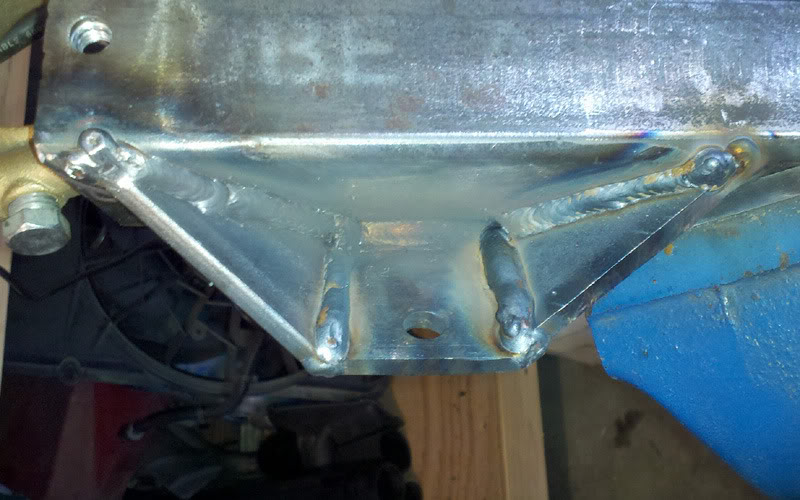 The rear bracket completed, test fit (fits beautifully with the seat installed), and in place 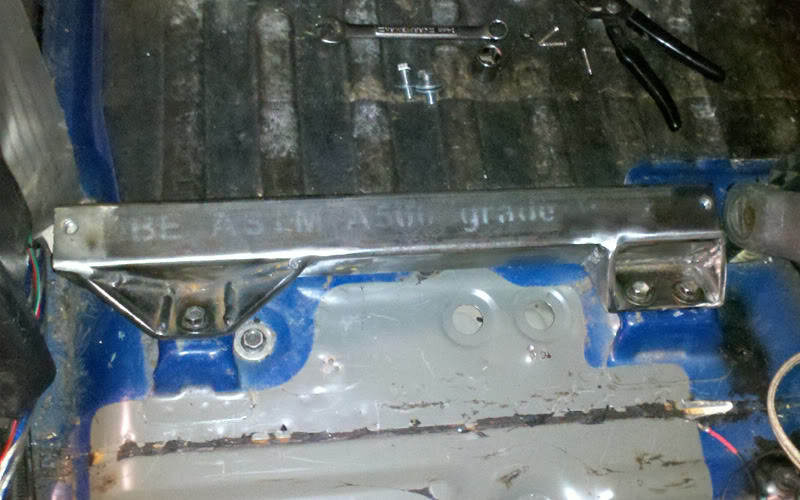 The final product pre-powdercoat. Overall I'm very happy with the way these brackets turned out, and how much my fabrication skills overall have improved since starting this project. 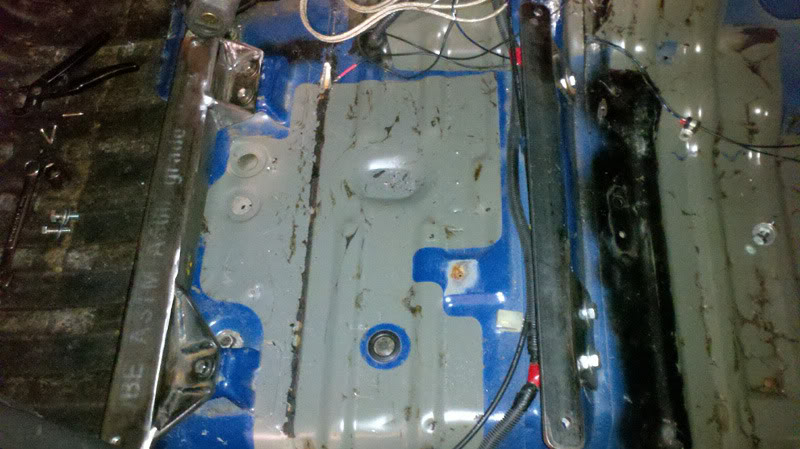 So what do you guys think? I'd say these are burly enough to be worthy of a Land Cruiser

You keeping the stock seat belt receptacles? Reason I ask is my UrS4 Audi Recaros have them built into the seats so I have to have extremely strong brackets. Haven't even gotten barely close to that project, especially considering that all I've been able to do with my ancient, 2nd-hand, 110V welder is booger welds.

Wanna come do mine, Spoo?

Tinker said:
You keeping the stock seat belt receptacles? Reason I ask is my UrS4 Audi Recaros have them built into the seats so I have to have extremely strong brackets. Haven't even gotten barely close to that project, especially considering that all I've been able to do with my ancient, 2nd-hand, 110V welder is booger welds.

Yeah The stock seatbelt hold downs are still there (worked out to be perfect placement for the seats too, which was an unexpected bonus). Unfortunately, this and the H55 conversion might be the last projects I do on my truck for a long time since the baby is due in July. I might end up selling the Duster too, but hopefully not. It's nice to have a driveable car that gets better economy that the 62 for when the wife needs to drive her Celica.
You must log in or register to reply here.

I
Fj60 seat covers front and rear for sale