So, after about a year of owning an originial M416, I launched into a refurb this weekend while the family was away. What a job.

Here is the plan:

-changed out axle for a 3500lb axle with toyota bolt pattern. I'll run a 33x9.5 so I have a common spare. In doing so, I ditched the braker.

- grind off rust and repaint.

-put spring over with new tires/wheels. 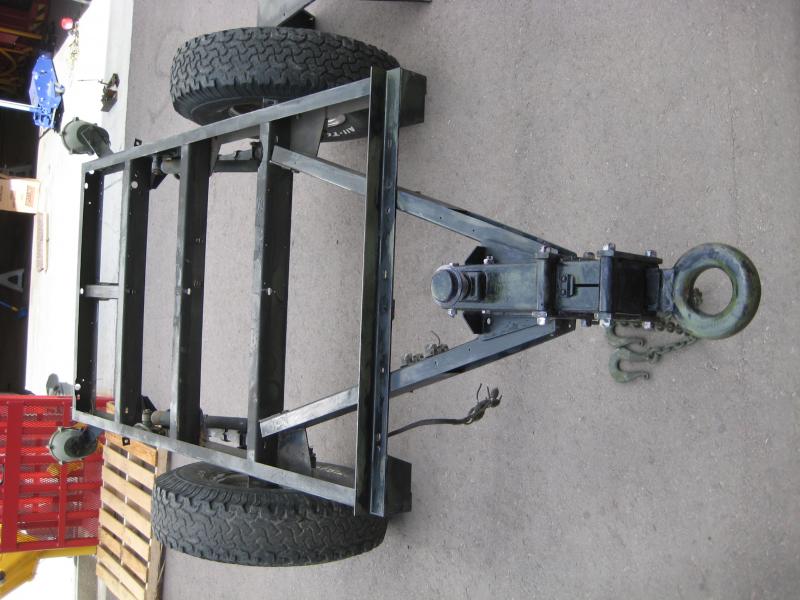 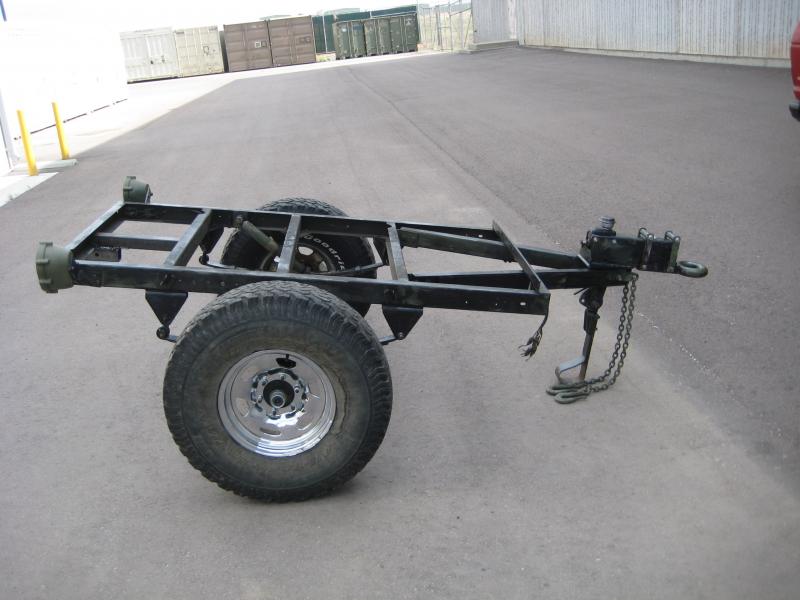 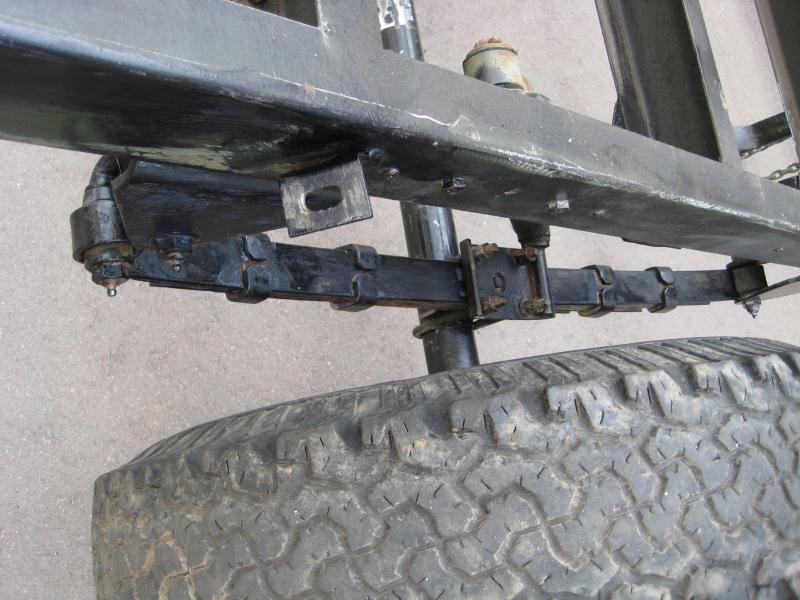 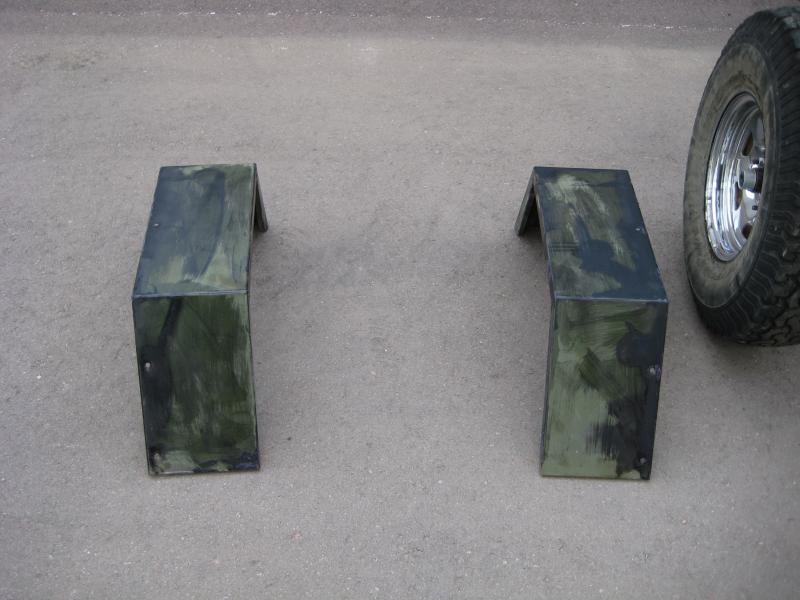 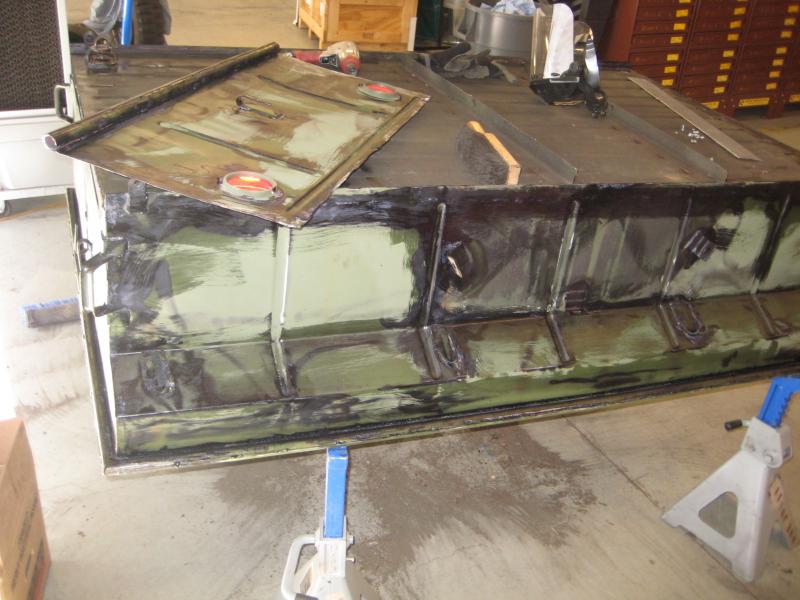 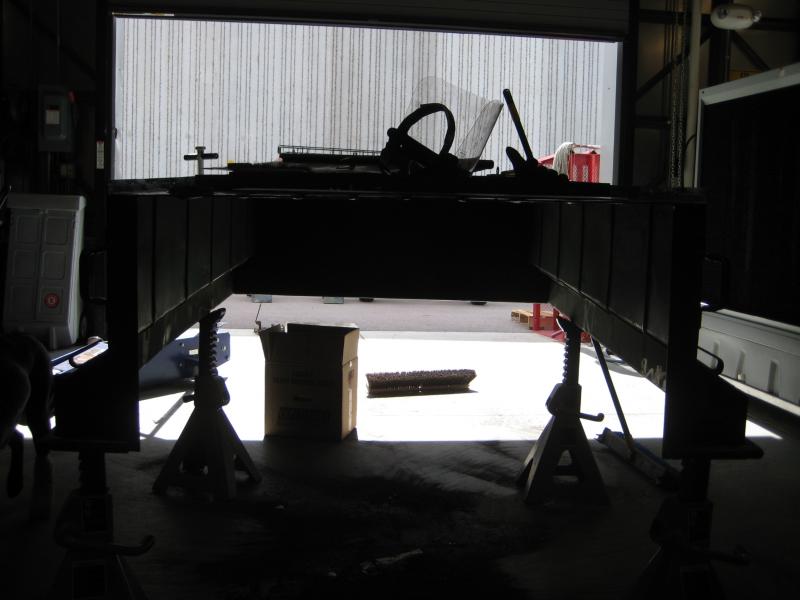 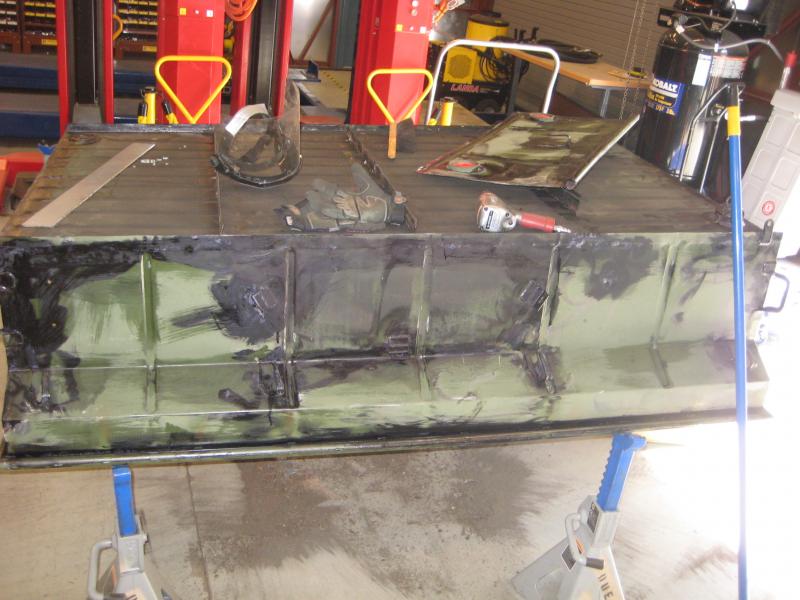 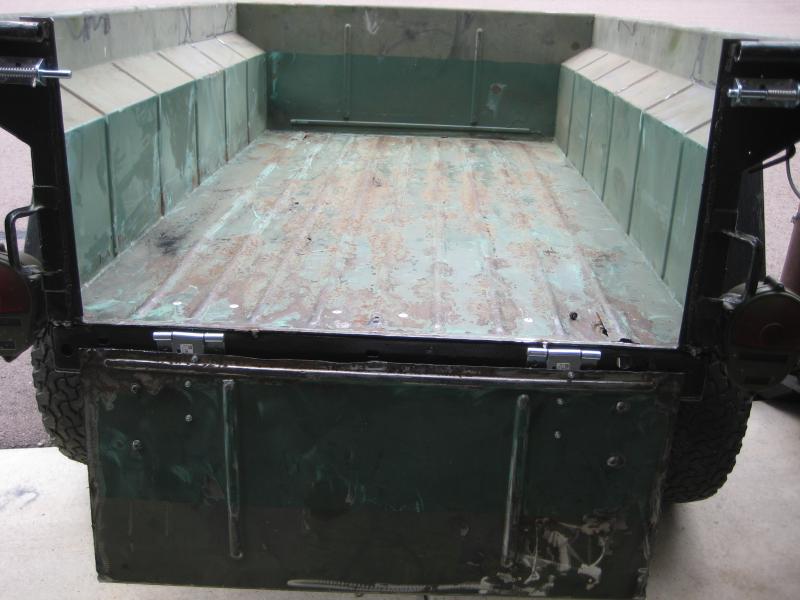 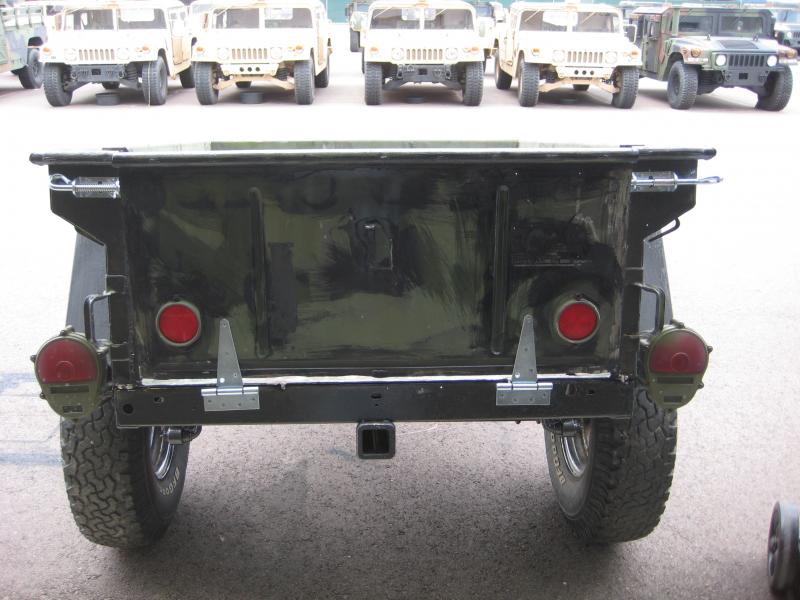 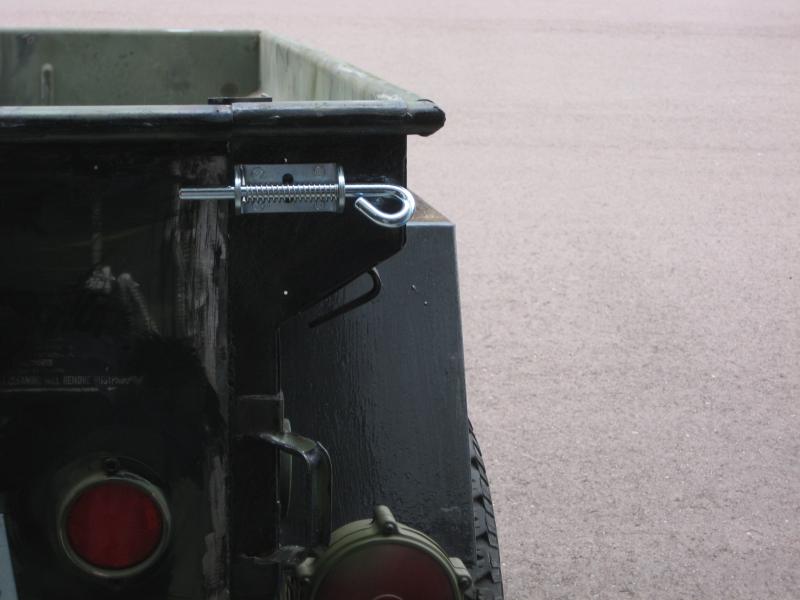 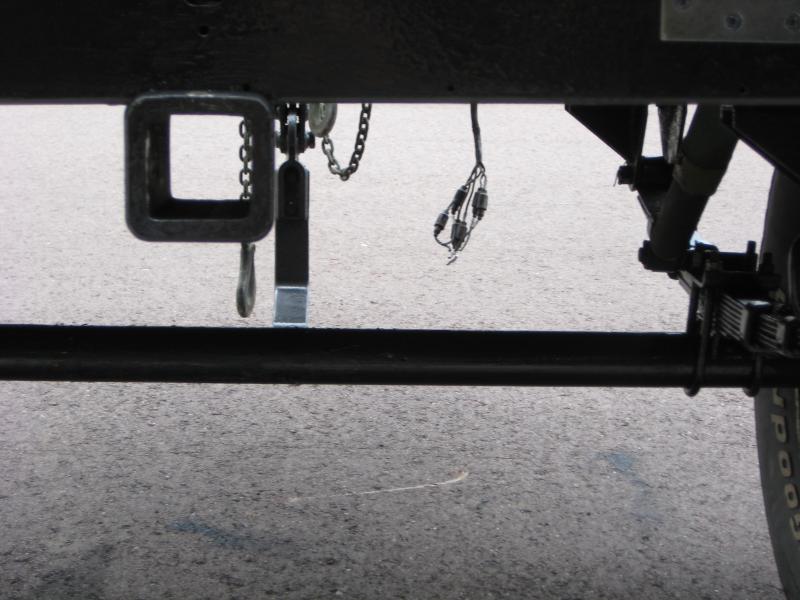 I still have a good bit to do.

I need to figure out the best way to lengthen the landing leg as I'll be putting a roof top tent on the trailer and want it somewhat level.

I still need to paint the bed and spray on another coat underneath. I plan on rhino (not really) lining the bed with a box kit.

Tomorrow I launch into the fab of a rack for a roof top tent. I'll be using aluminum (2x2"), so I hope it comes out OK. I haven't gotten the wiring figured out yet.

This is what will pull the trailer. I'm looking forward to some great camping trips with the family. 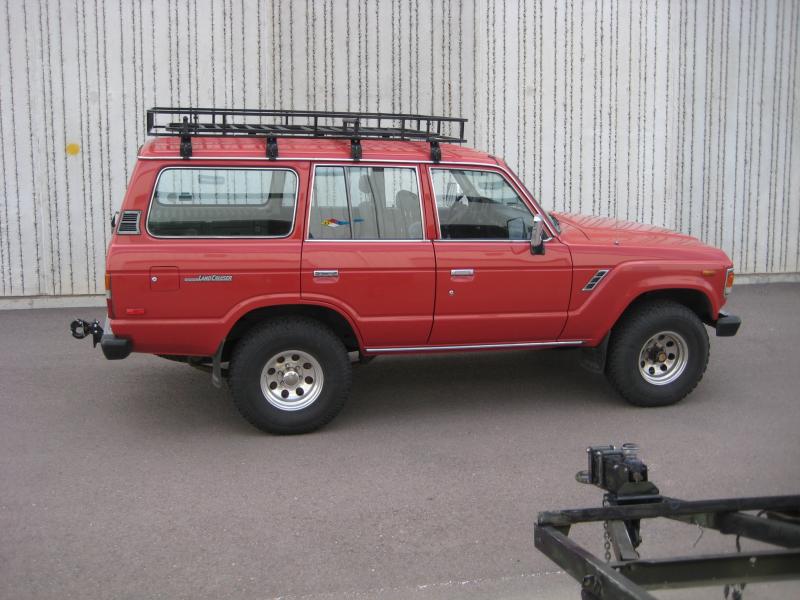 so those tailgate spring loaded pins have a lock out keeper ?

exactly, pull and turn with lockout. I got them for about 4 bucks at a local truck supply store. I have some angle iron that I cut tonight that I'll bolt onto the tailgate for the tab to go into.

You either have an awesome collection of HMMWVs in your driveway and one hell of a garage.....or your cheating

Nice job, trailer is look'n good. You must have found that in the southwest somewhere, looks really rust free.
R

By the looks of all the hardware in front of your trailer ( all the humvees ) must have been easy to get the trailer. Love trailer build ups. Good looking fj too.
F

Are you planing on strengthening the the tailgate and the sides of the bed where the tailgate was cut out. I know that they used very thin (18 gauge I think) metal to make those tubs and you will lose a lot of support by cutting a tailgate into the tube.

I have connections to work in a motorpool, so those are not my HMMWV's. The military doesn't (obviously) use those M416's any longer. Mine was built in 1985 in my hometown (Ebensburg, PA). I bought it in NY from a guy who bought 12 of them off the dock down in NJ. The trailers were going to Panama before they shut the installation down. I bought it with literally 0 miles on it, but it had been sittting outside. The majority of the rust was in the tub. I took it apart and treated it with a rust inhibitor (one step) and then painted it with rust resistant paint (hammerite).

Yes, I welded some angle iron around the tailgate as a frame and I riveted a strip of metal underneath the tub.

Finally got the trailer painted and wired up. I used the existing lights which were in great shape. I peeled back the existing wiring harness until I found the sillver tags. I went on Steel Soldiers and got a wiring diagram and wired it up to a 6 pin connector. I just changed out the bulbs to 12v. 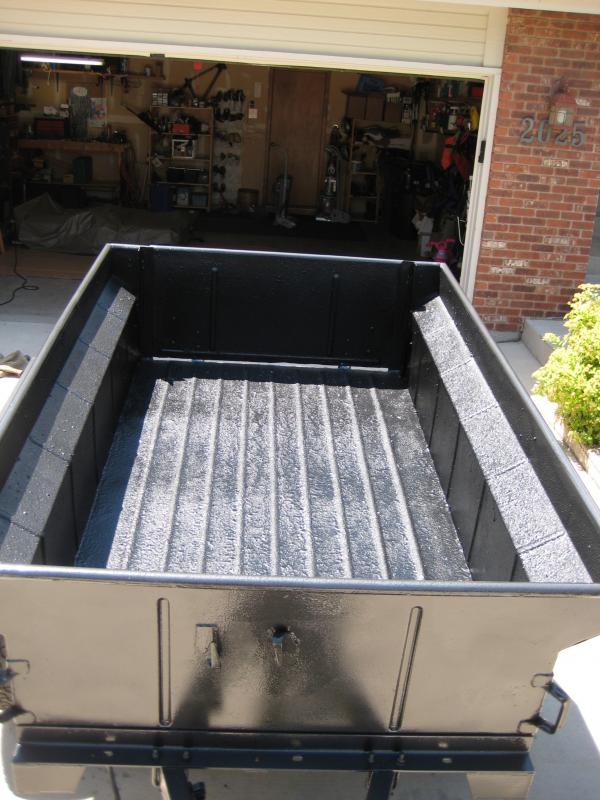 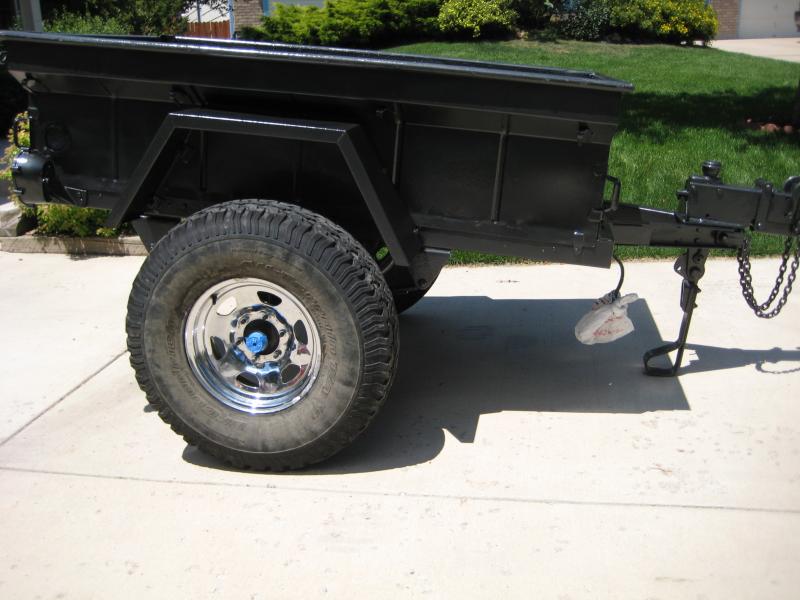 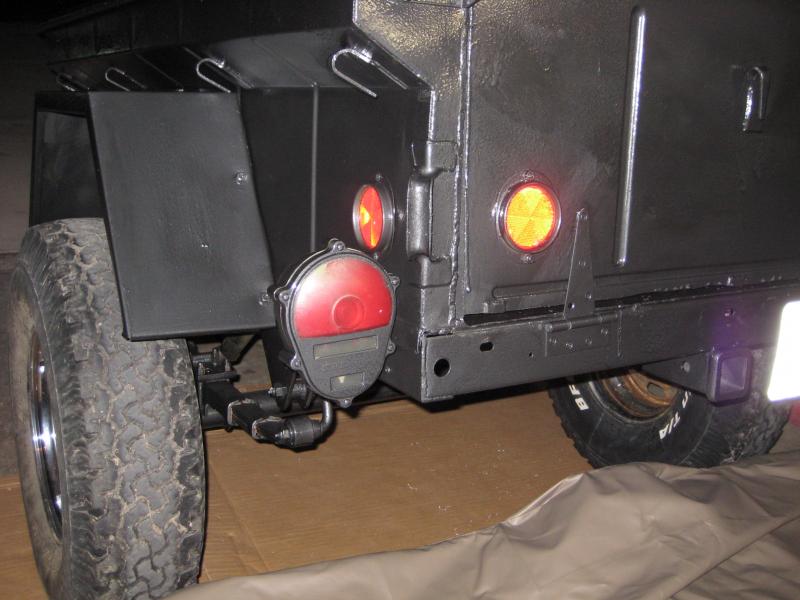 I used the existing wiring harness and spliced in some wire. 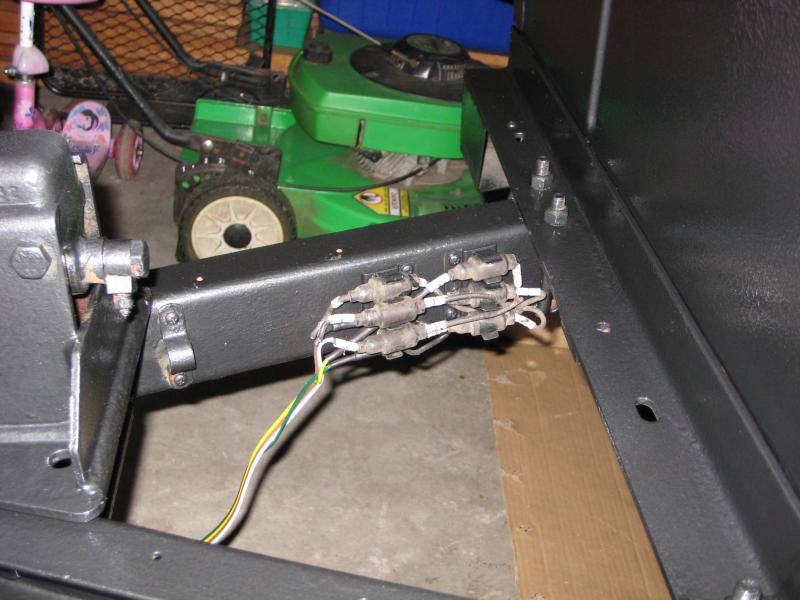 Almost done with the trailer build. This weekend I finished up the wiring, and got the roof rack welded. It's a little beefy, but I had some access to free 2x2 aluminum. I also got my rooftop tent mounted up for a camping trip next weekend. 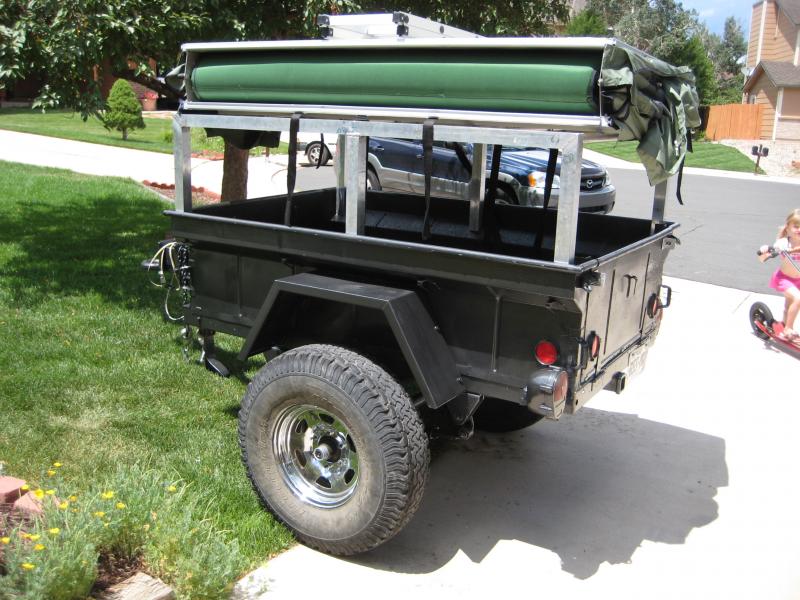 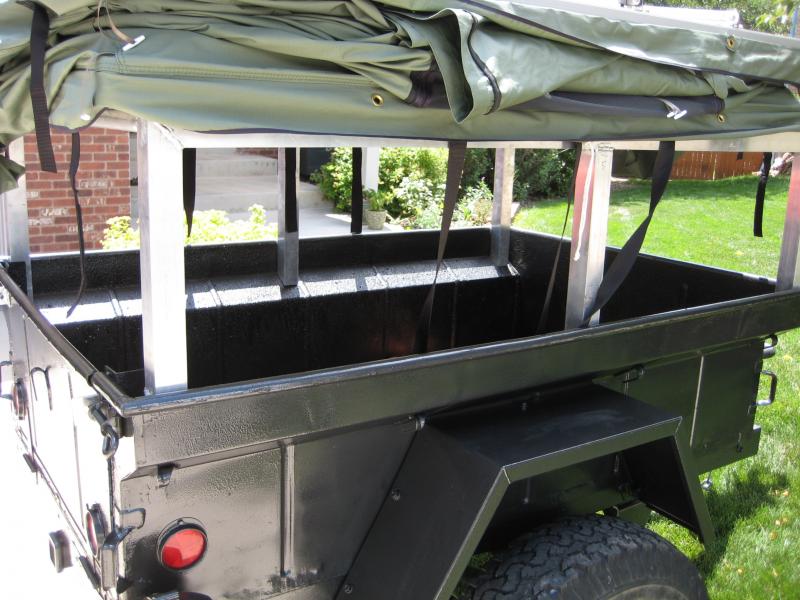 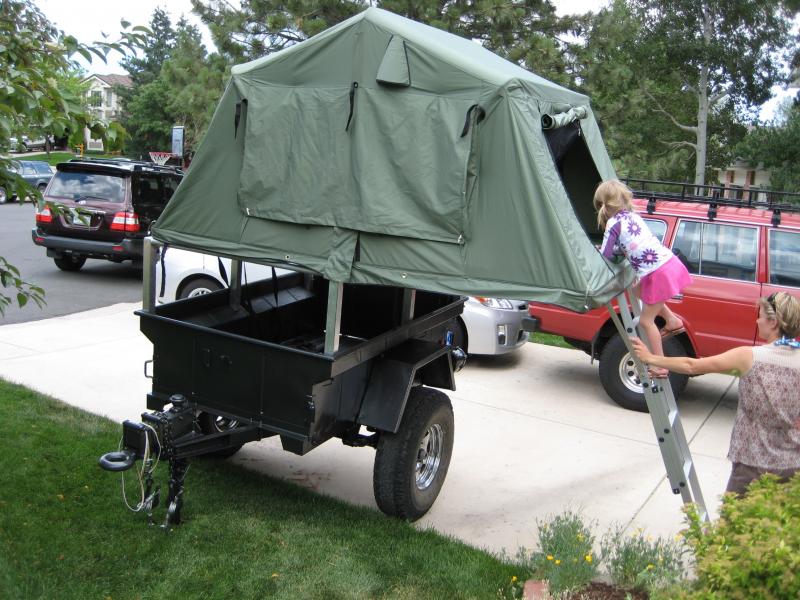 the family is ready to go. 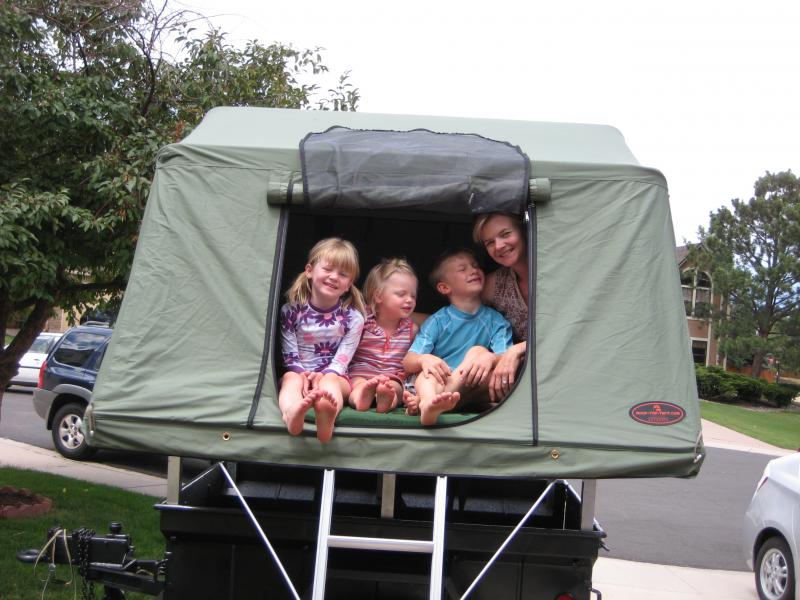 The trailer looks great! No sleeping on the ground with the rattlers eh? One thing though , It needs stickers all over it. That is what trailers are for.
F

I like the use of the aluminum for the rack to mount your tent. Looking at your photos tho, I am trying to figure how you attached the rack to the tub. I dont see any exposed bolts on the trailer. Can you post some pictures on how you tied them together please. Nice work by the way!

Here are a few pictures of how I attached the rack to the frame. I went round and round on how to do it. I initially planned on welding 2" receivers into the trailer so I could just slide the aluminum 2x2 into those receivers. Those were about 18$ a piece from a local trailer supply store, so I decided against it after the thought of buying six. I then thought that I'd use square U-bolts but decided against it since I'd have to drill two holes for each post. Finally, I decided to just bolt her on. It is really snug and beefy. It worked great during our first expedition this weekend. We went up to Tarryall Valley just outside Fairplay, CO. The mosquitos were ridiculous, not sure why. Otherwise, it was a nice trip. 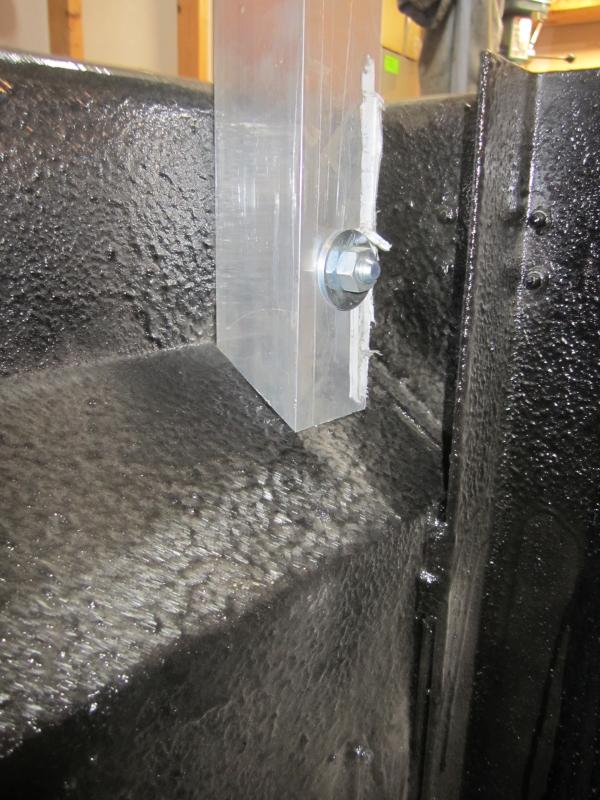 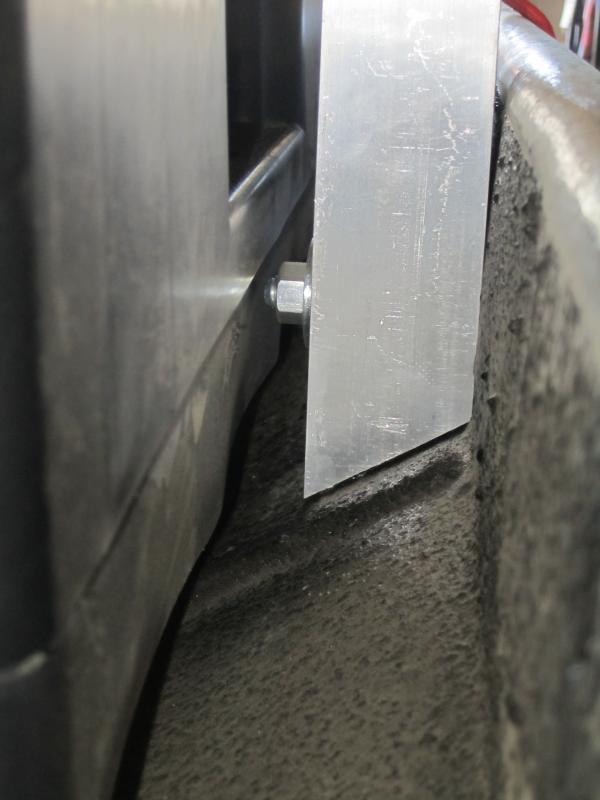 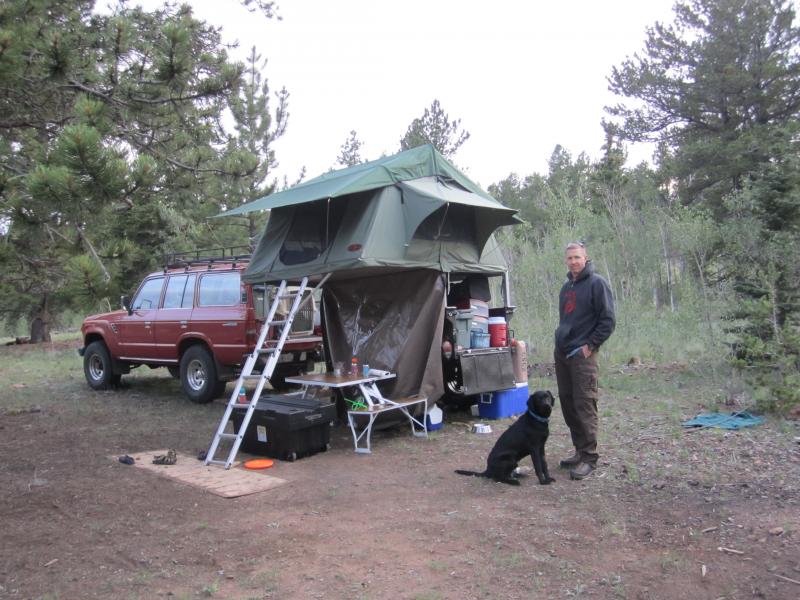 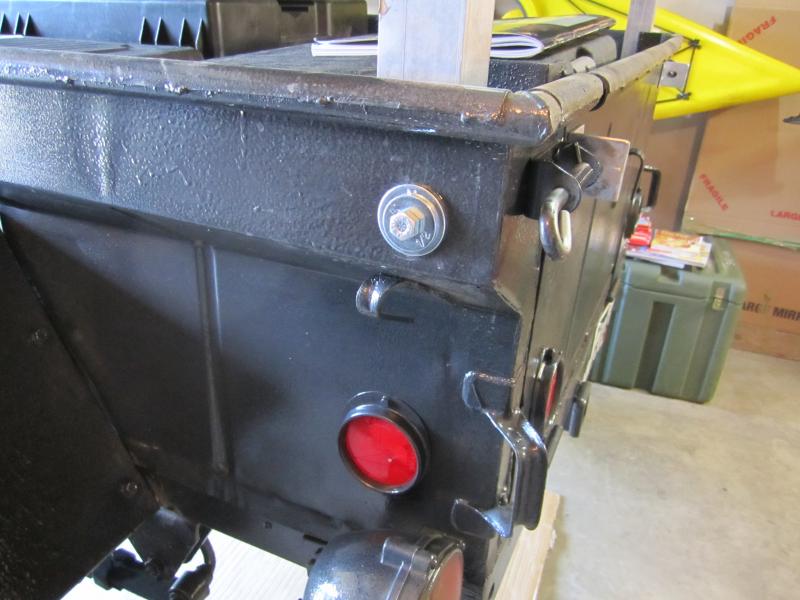 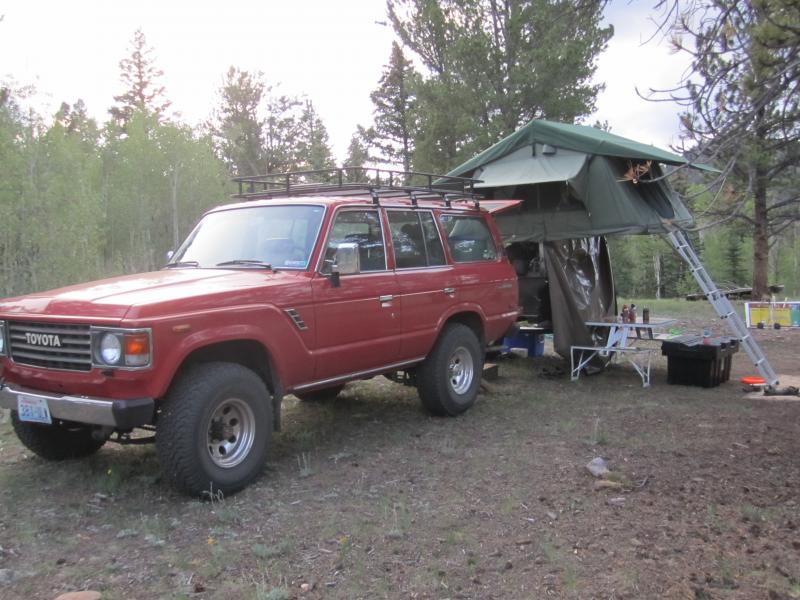