Hi folks.
My 5 speed Prado has actually been very good to me so far, but as soon as I decided to sell it for a more dedicated wheeling rig, wouldn't you know but it started giving me tranny problems. I'm not very experienced with manual trannies in general, so I'm a bit in the dark as to what could be the problem. I sincerely hope that it's a cheap fix, as funds are currently very tight.

It has never been the best shifting transmission - it often gave me troubles shifting into reverse. It would grind a bit, even with the clutch fully depressed, before engaging the gear. Occasionally I would have the same problem with first gear.

Recently, fourth gear has been giving me headaches. It started with an occasional fourth gear grind, with clutch depressed, but a second attempt at shifting would be successful. As the problem developed, especially when the truck was at temperature, fourth would engage but knock itself out of gear if I didn't hold the lever in position when I disengaged the clutch. Now it seems fourth will only grind, and won't engage at all, and third is starting to give me troubles too.

The clutch fluid looks to be at a normal level. The truck has 90k kms.

Could any of this be a factor? I hope it's the clutch rather than the tranny - and as these problems seem to happen when the clutch is depressed, I would assume it is.
Last edited: Mar 26, 2007
LJ78 sold before the head went.
Suzuki Samurai for cheap fun.

Generally manual transmissions for Toyota's are using about an 80w-90. If you're running 15w-40 in your tranny that's a wee bit to thin. If its in the engine, it usually doesn't matter what brand you use, as long as its quality.
Last edited: Mar 25, 2007
---

Nothing quite makes you feel like a newbie like being informed that your transmission isn't lubricated with oil from the engine like you thought it was. In my own defense, this is my first manual transmission vehicle on four wheels, and my past motorcycles' transmissions have all been lubricated with engine oil.

I'll check the level and quality of the transmission oil in the morning, and hopefully it's just low. I'm not holding my breath, but a fluid refill or change would certainly qualify as the cheap fix I was asking for.
Last edited: Mar 26, 2007
LJ78 sold before the head went.
Suzuki Samurai for cheap fun.

get 90W in there as fast as possible and throw a qt. of lucas gear oil in there too to hopefully bring some life back to it...
'92 Euro Spec HJ80
M

The level and quality weren't too bad but I squeezed in some more 90W. No effect. Fourth gear is officially lost.
LJ78 sold before the head went.
Suzuki Samurai for cheap fun.
M

I guess it's time to take it into a pro.

Does anyone know if the domestic 4Runners used the same transmission? ...or will I need to get parts in from Japan?
LJ78 sold before the head went.
Suzuki Samurai for cheap fun.

I'm confused. It looks like you are saying the clutch fluid is slightly above the full line. What exactly have you got for fluid in the clutch master, transmission, and t-case? Actually, you might as well tell us what's in the rad and engine while you're at it.

If you have the tranny full of 15-40, you should drain it and refill with gear lube. It'll only cost a few bucks and might restore some functionality while you look for a new transmission. You should get a service manual. This is the rare case when I'd say even a Haynes or Max Ellery would be helpful.
Rocky Mountain Land Cruiser Association TLCA # 5513
'10UPK60L-GKTSKA '99UZJ100L-GNPGKA, '75FJ40, '66FJ40
I support our Troopies
Home - http://www.trails4tomorrow.ca

get 80 90 weight immediately. how can you overfill the gearbox without spilling
"engine" oil everywhere? i had my prado up behind BRITTANIA MINES YESTEDAY i left the jeeps in the dust the prado is extreemly capable
89 BJ74 ARB lockers front and rear , Marks 1.08 to 1 Hi and 3.05 to 1 lo. I am using EMU springs for 2012. 24V 6hp 8274 and a good driver

Location
in the stacks

Hmmm...sorry to hear of your troubles. If your tranny is a R151f, there's a repair manual here: http://outgoing.bauchan.org/toyota_surf_tech/repair_manuals/

The gearbox type should be stamped on a plate on your firewall, and/or your door jamb.

So you didn't drain the tranny before adding the gear oil? You need to get that engine oil out out of there! If I recall, the capacity on that tranny is 3.9L. But please double-check in the manual for the correct viscosity and amount.

Not sure about the R151f, but the A343 in my LJ78 was also used in domestic market Tacomas, 4Runners, etc., I believe. You may be in luck.
Robin

Okay - I realize this wasn't clear before, so let this be the all-clarifying statement:

There is no motor oil in the tranny!

I was mistakenly under the belief that engine oil was distributed to both the engine and the tranny by the oil pump, but have now discovered that there is in fact a separate oil supply for the gears (duh). I checked that oil, and topped it up with gear oil. I never filled the transmission with motor oil.

I'll check the model of transmission - hopefully it's compatible with something domestic. I hate to think of the shipping costs for a transmission from Japan.

Thanks for the replies.
LJ78 sold before the head went.
Suzuki Samurai for cheap fun.

There is a small plastic cup on the bottom of the shifter that can give some similar symptoms when it fails. You should order one up and try it. Just ask the dealer for a cup from a similar vintage mini truck. It should be less than $5. Sometimes the old one actaully desintegrates and the pieces jam up the mechanism.
Rocky Mountain Land Cruiser Association TLCA # 5513
'10UPK60L-GKTSKA '99UZJ100L-GNPGKA, '75FJ40, '66FJ40
I support our Troopies
Home - http://www.trails4tomorrow.ca
M

It seems the Prado manual is the R150F. A little research has turned up that this was the same transmission all the 3L Toyota trucks had up to 2004 (4runner, Tacoma, Tundra). It seems it won't be hard to find parts, then.

I've decided, however, that I just don't have the tools, expertise, or time to overhaul it myself. Off to the shop it goes, and I guess I'm eating out of the dumpster for the next little while.

Thanks for the help.
LJ78 sold before the head went.
Suzuki Samurai for cheap fun.

denis said:
Have a look at the shifter cup like bruce said. It just takes removing the shifters cover and shifter itself.
An R150F should last much longer than 90000km.
I tore apart a 210000km R151F and there were almost no signs of wear on the internals. Same with a 280000km R154.
Click to expand...


I'll check into that today. It would sure be nice if this were a $5 fix.
LJ78 sold before the head went.
Suzuki Samurai for cheap fun.
M

I'm looking for the shift cup that may (hopefully) or may not be broken. All I had time for this morning was to disassemble the interior around the shifter, so it now looks like this.

I assume I'll need to continue and remove the plate at the base of the shifter - the one with the spring and shifter axis. I assume this attaches the shifter to the transmission. Then what should I see? Is there anything I need to look out for when disassembling the shifter?

Thanks for the help, guys - keep it coming! 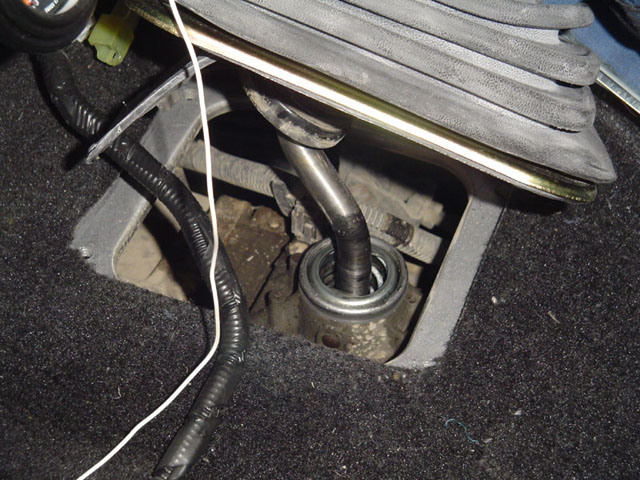 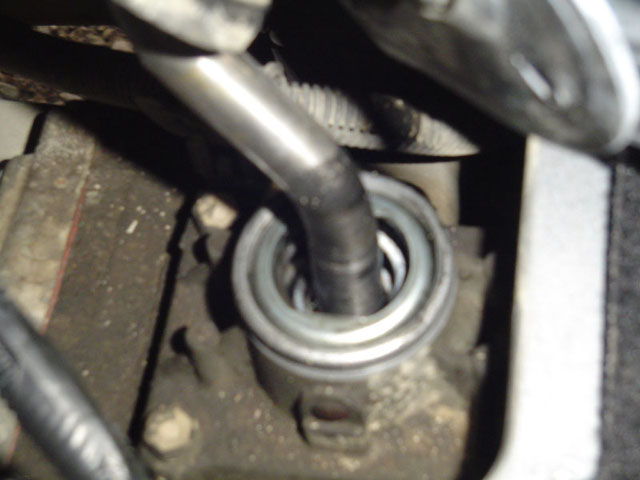 You need to push down on this ring and turn it. Which way to turn varies by year but I'd try counter clockwise first. It can be quite hard to do. There is a spring behind there, push the ring down against the spring and let it come back a few times before you try to turn it, just to loosen it up a bit.

It just needs to turn 30 degrees and then you'll be able to lift the shifter straight out. If you put it in neutral first it will go back together better later. There will be a ball on the bottom end of the shifter and the cup covers it. 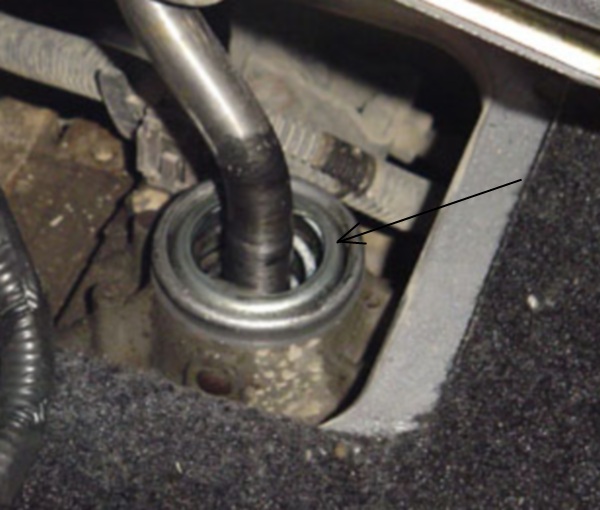 Thanks, lowenbrau. You rock. I'll give that a try this afternoon.

I never thought I'd be hoping to see a part of my beloved truck broken, but cross your fingers for some broken bits in there for me.
LJ78 sold before the head went.
Suzuki Samurai for cheap fun.
M

lowenbrau and denis, I owe you guys a beer. Here's what I found after I took the shifter out. That little green ring had completely disintegrated, just as you said.

lowenbrau, you just saved me likely hundreds of dollars, at a time when my student loans far outweigh my bank account. Thank you so much.

Now I'm off to the Toyota dealer to buy my new green ring - NOT a transmission overhaul! 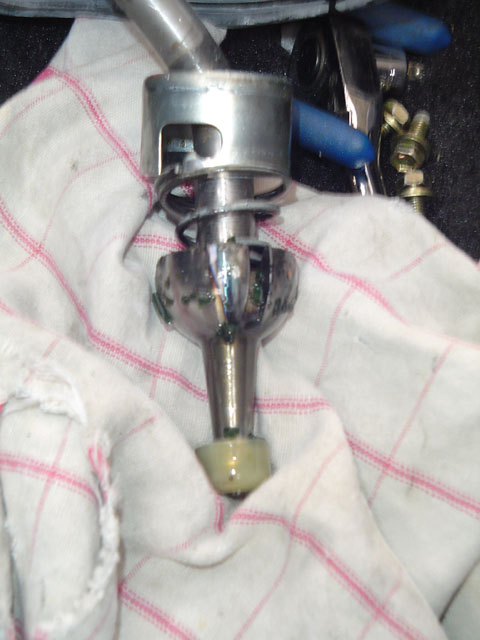 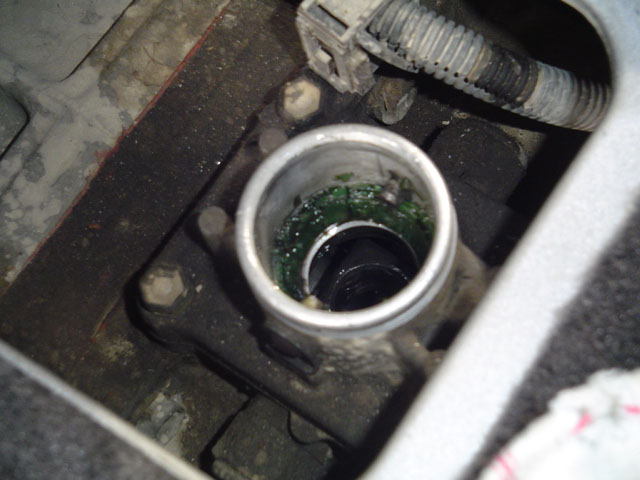 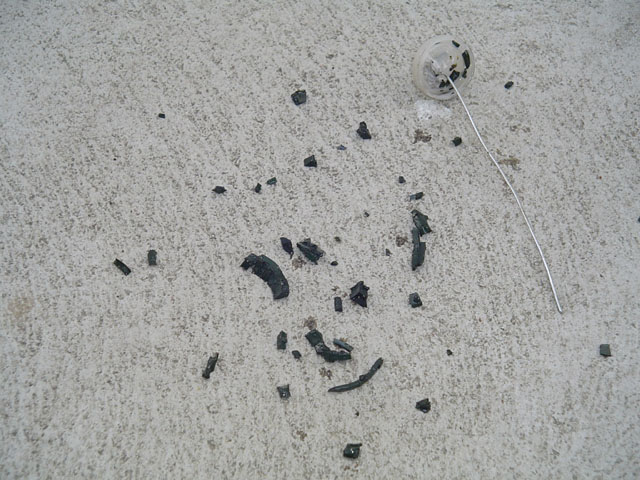 PS. that shift lever retainer was definitely a pain to remove. For the record, it's anticlockwise in a 1990 R150F.

Also, for Toyota service manuals for LJ78 parts common to other trucks (including the R150F), this site is quite helpful.
LJ78 sold before the head went.
Suzuki Samurai for cheap fun.
You must log in or register to reply here.