I have always disliked the constant drone of that little fan behind the dash. Today I decided to finally disable it. Other Mudders have posted that the fan sits below the digital clock in the top center of the dash. I would say it's more like directly behind the clock, and easier to get to by removing the center top dash vent and clock unit itself (rather than through radio removal). I also couldn't find the fan or figure out how to disable it by going through the radio access.


To pull out the center top dash vent/clock piece, work a plastic trim remover around the edges and just pull gently. There are two friction clips on either end of the piece (right and left sides), so try to pull on those sides rather than in the center of the piece. As it starts to come out, you'll see that there are some sharp ridges on top of the piece that is coming out. Try to finesse/softly push up with your fingertips the soft dash where it meets that top of the plastic piece you are removing, so as not to damage the dash. Disconnect the clock wire by pushing down on the top center of the wiring plug as you remove the assembly from the dash, it's an easy connector. 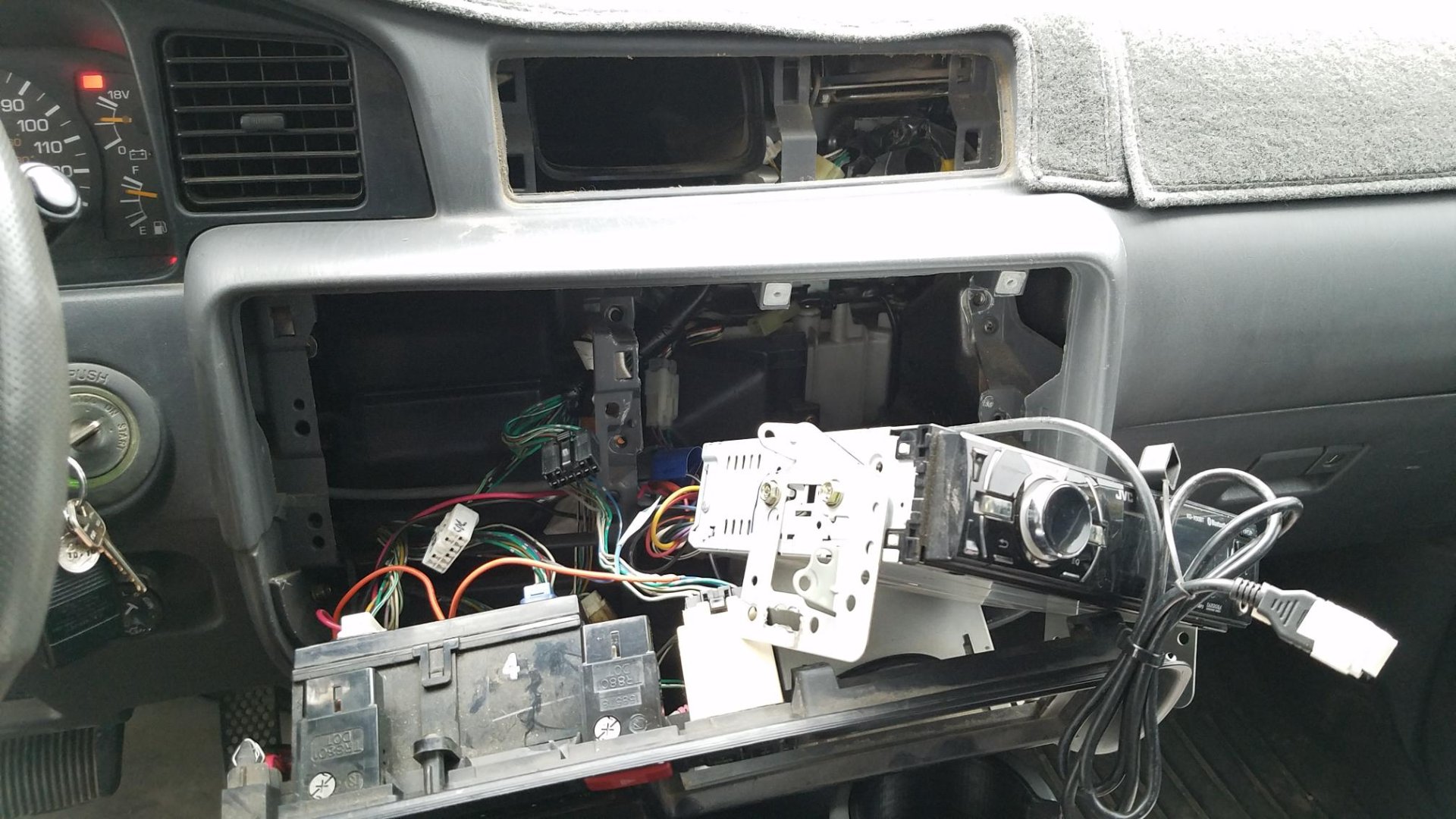 Once you have the center vent/clock assembly out, you'll see the fan sits horizontally right behind the clock. Just disconnect the little white electrical connection to the left of the fan. It's useful to have the keys in the ignition while you do this, to help you see/hear the fan to identify it, and to confirm that you have disconnected the fan. 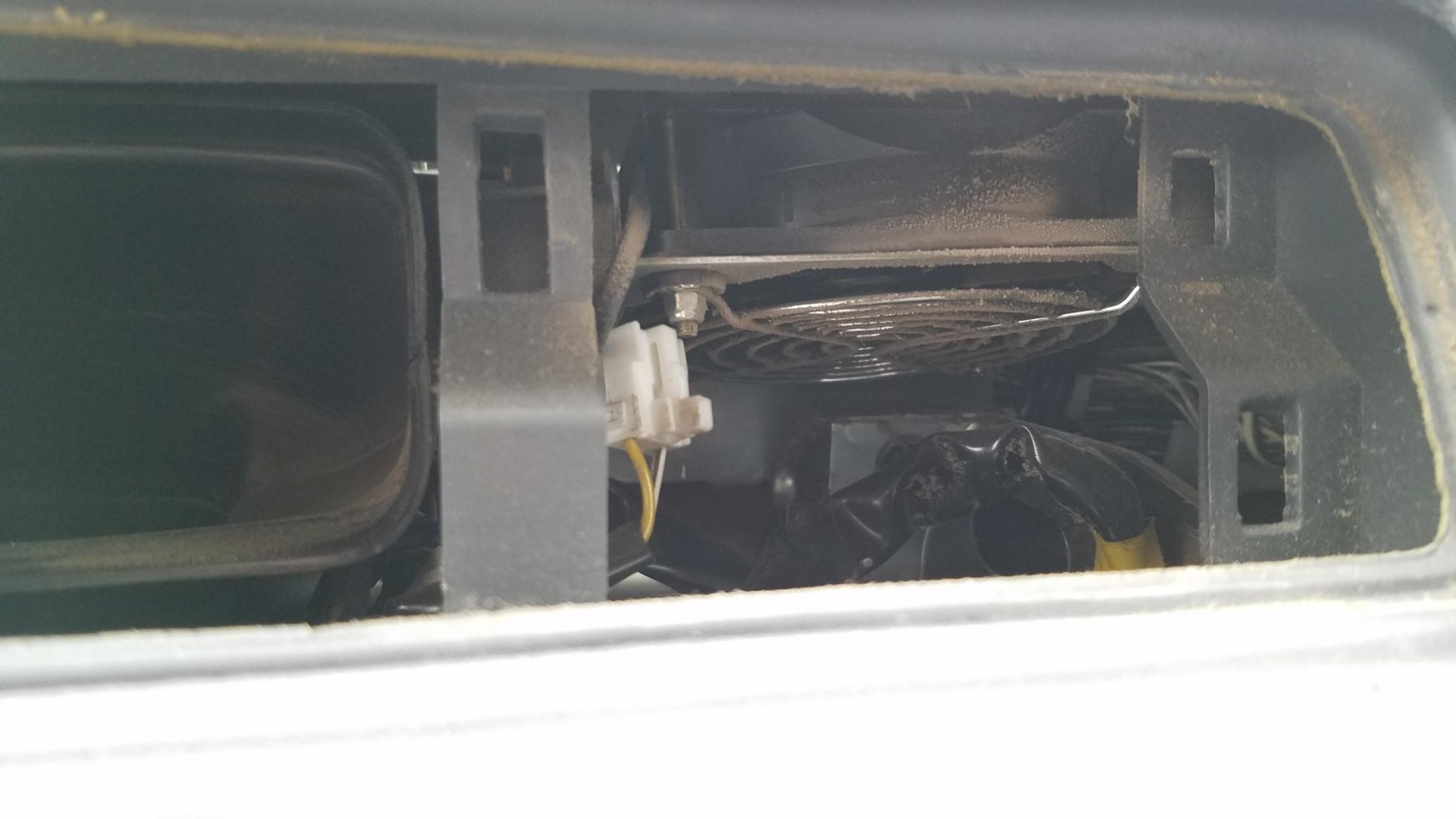 It's a little unnerving to pull apart dash friction fittings, at least for me. Just try to take your time and pull the vent/clock out gently and straight. It should come out with a little gentle persuasion. It's also a good time to use a paintbrush and a wet detail cloth to clean up the trail dust in all the nooks and crannies. 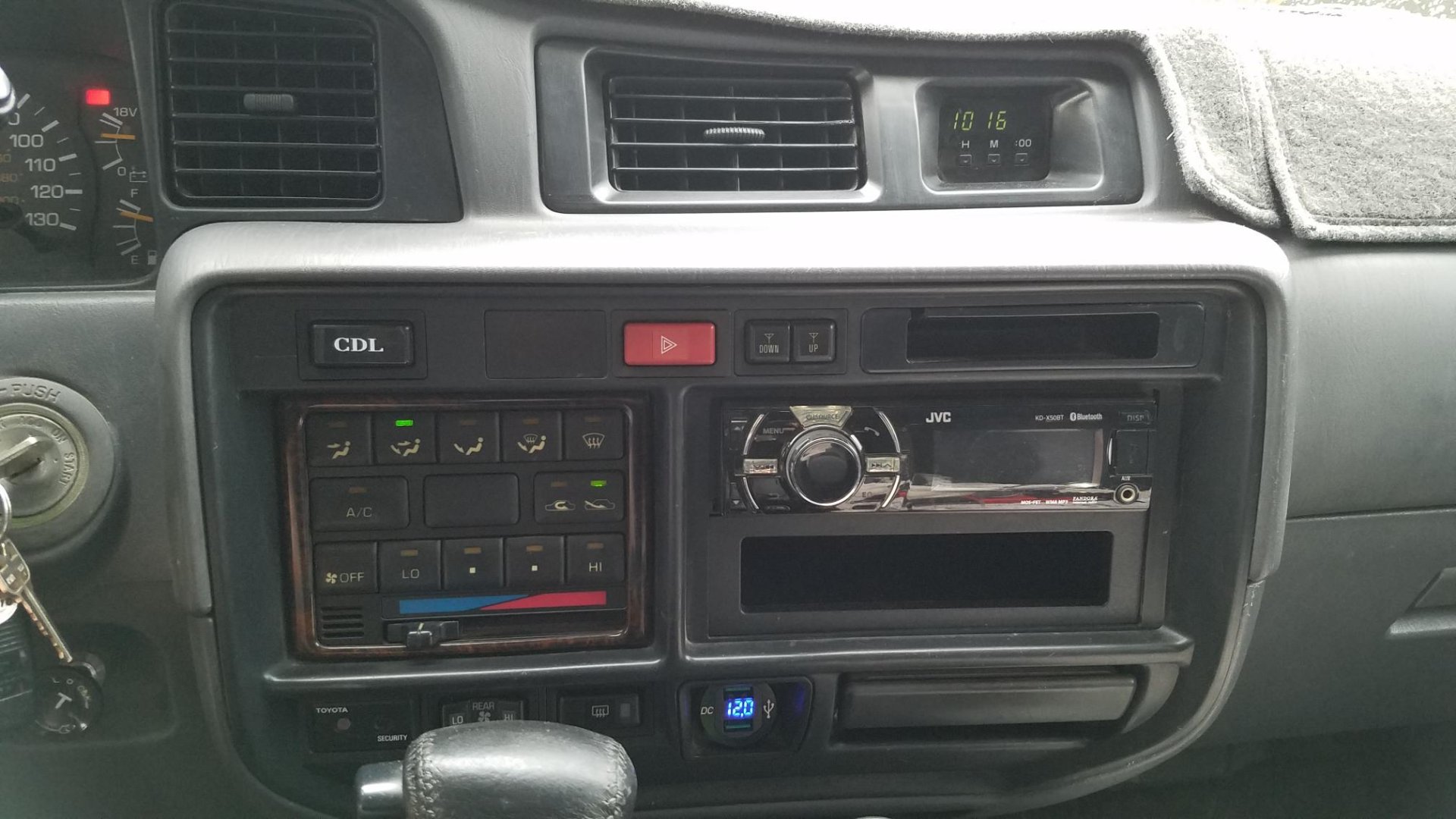 I was installing the JDM red hazard switch (84332-26080, I realize the triangle is in the wrong orientation, I'm okay with that), and taking out the inoperable CB which was below my radio. So, I tried both the radio access and removal of center vent/clock assembly. If you are just looking to disable the fan, I suggest trying the vent/clock assembly first. You might be able to get it done in 15 minutes. The radio removal is more involved. YMMV.
Last edited: Jan 15, 2022

I have never noticed a fan there... are you sure its not cooling the Government installed tracking chip?
Be careful the Black Helicopters could be after you.

Seriously, what's the fan cooling? Why is it there?

Rusty Marlin said:
I have never noticed a fan there... are you sure its not cooling the Government installed tracking chip?
Be careful the Black Helicopters could be after you.

Seriously, what's the fan cooling? Why is it there?
Click to expand...

I'm definitely on the lookout for the black helicopters, and I'm sure there's a chip planted somewhere. I just hope that chip helps me track down my rig if some dirtbag steals it.
I'm guessing the Toyota engineers felt the stock double DIN radio needed some external cooling air flow. The fan blows down toward the radio. But I have been on the trail looking over maps irritated by that little whir far too many times. It even runs even with the engine off if the key is in the On position.
I also disabled that buzzing noise that comes from the left kick panel when you turn on the ignition, too. I just like silence, especially when I'm in the outdoors, sitting in my truck checking out a map, a cool view, a coyote, etc.
Last edited: Jan 15, 2022

I don't want to hijack the thread, so you might want to spell it out in another thread, but @


bicycleagent003, how do you disable the buzzing from the left kick panel?​

Looks like a fairly standard CPU fan in which I'm sure you can easily find a suitable replacement that'll operate very quietly or rip it out?
N

That fan was indeed to cool the radio setup. It wasn't fitted on base models, just higher trim levels with the higher end radio. My 1996 HZJ80 didn't come with one. Just rip it all out and put in a semi-modern head unit.

Ah that's why I have never heard it, the LX doesn't have one.

It gets very hot under there if you are using the system in a hot climate so guess it's just to circulate the air under there. On mine I have never noticed any noise, I presently have the dashboard out and it does work but very very quiet.

Mine is quiet. Didn't know it was there until I was removing the clock to install a tablet mount.

I don't have one and after reading what the OP did, I felt cheated. Reading further down I realized, that's what I get for not buying a higher level Cruiser. I went from feeling cheated to feeling cheap.

Rollinns said:
I don't want to hijack the thread, so you might want to spell it out in another thread, but @


bicycleagent003, how do you disable the buzzing from the left kick panel?​

To disable that buzzing noise when you first put the key in the ignition, just remove the left side kick panel. You'll need a 10mm socket to get the foot rest off, then I think you might need to remove the threshold plastic piece that you step over upon entering the DS, then remove the kick panel itself. They all fit together in a certain order which is obvious when you're looking at it, but my rig is not right in front of me as I write this. Once you get all those wires down there exposed (and there are a lot of them), just put the key in the ignition and take it out a few times while you have your head stuffed down there in the DS foot space. I seem to recall it was something a little larger than the EFI relay, and also cylindrical, and that I just pulled it out and Poof! no more buzzing noise. It was years ago that I pulled it out, so I can't recall any more details than that. But it was worthwhile, and easy.

If you're going to pull some wire through the firewall, it's a good time to do that, and the Pin-7 mod (Center Differential Lock Pin 7 Mod - Slee Off Road - https://sleeoffroad.com/center-differential-lock-pin-7-mod/), and to install some OEM toggle switches in the blanks to the left of the steering wheel. All that stuff is right there.

Post up how it works out for you. Happy trails.

Thanks for the details, maybe someone here knows what that clicking part is supposed to do.
You must log in or register to reply here.

What kind of fan clutch do I have?
2