I am having a code 71 on my 94 LC, I have read about every thread I could find regarding this problem.

I checked:
1. Modulator & filter element, the modulator is the blue one so it has been replaced, it was total clean, no carbon what so ever, the filter was very clean, in fact it looked brand new.

2. All lines to the modulator, clean and free.

3. Tested EGR, passed
(First cut the problem domain in half by seeing if EGR is working when the valve is activated:
Disconnect the vacuum hose from the modulator to the EGR valve, this one will be pluged by your finger, then remove the second line of the tee fitting and put a long piece of hose on it(see picture), this is the one you will suck on. With the engine idling, suck on free end of the long hose. If the engine dies, then you know that the EGR valve is working and the passage is clear enough to flow exhaust gas) 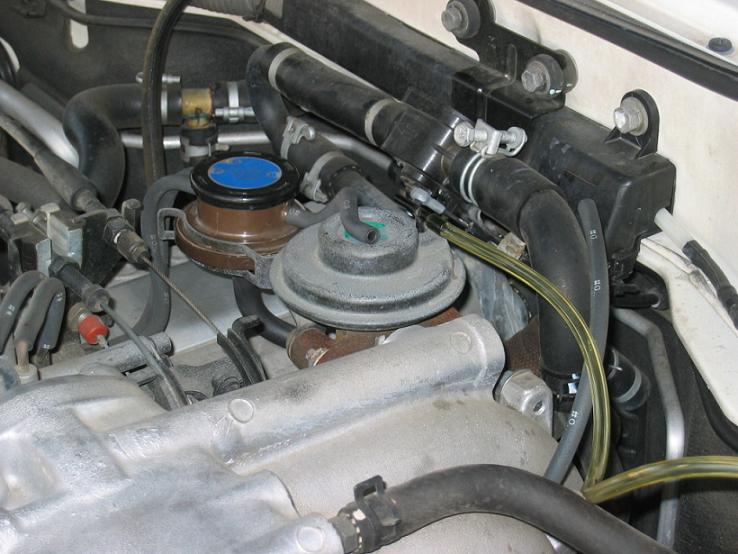 I found this in another thread:

"EGR valve:
To test that your EGR valve is good, do the following: Plug the vacuum port on the right side of the EGR valve (stick you finger on it, whatever). Find the vacuum line that connects between the left side of the EGR valve and what looks like the intake chamber. It's really connected to a brass tube that runs through the chamber to the VSV that sits inside the curve of the chamber. Pull off the whole line and make sure it isn't clogged, then replace the end on the EGR valve, and with the engine idling, apply vacuum to it. The FSM shows some sort of vacuum pump. You could connect it to another vacuum line or port on the engine. I used my mouth, and just uh, well you get the idea... didn't taste too bad. The engine should falter/shudder/stall, indicating that the EGR valve is good. If not, there's probably something wrong with your EGR valve, try removing and cleaning/replacing it."

Just not sure which lines he is referring to.

I just did the test and my engine did stumble, could not make it stall but clearly my sucking was have an impact on the engine idle. So I should eliminate the EGR as being the problem. 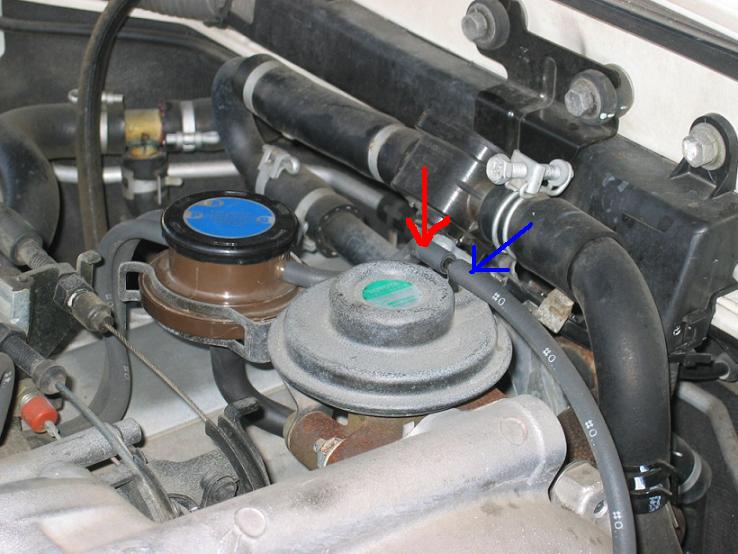 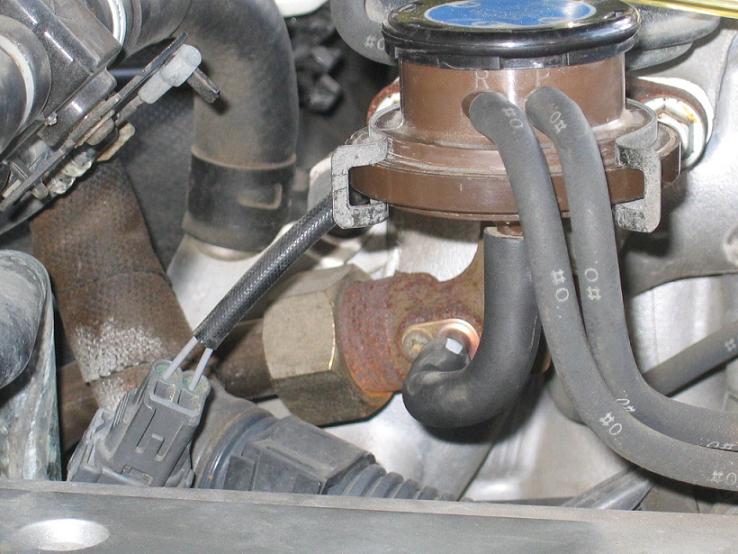 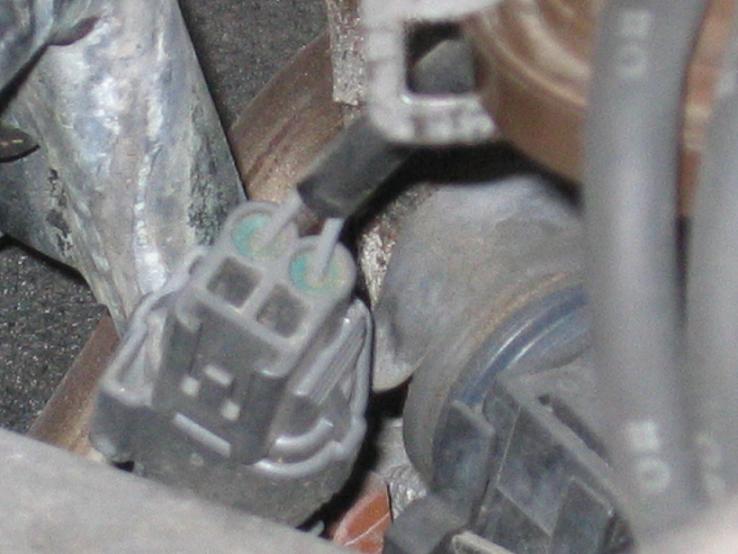 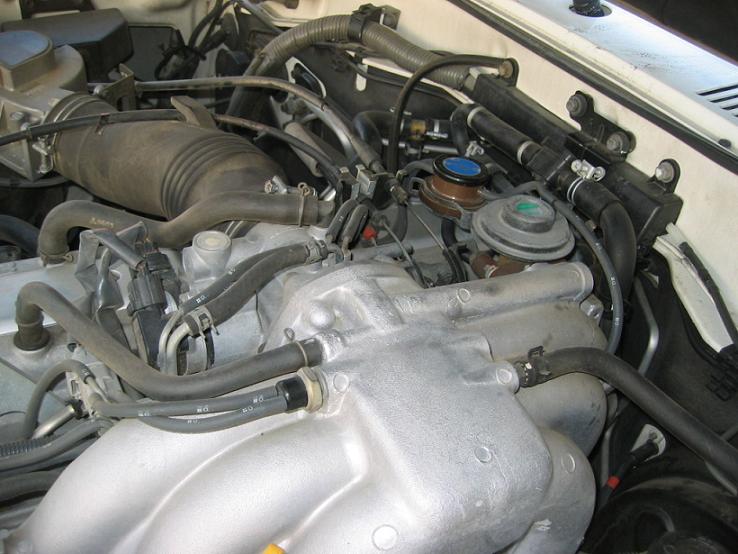 The probe on my '96 has a cable and plug that look like this. 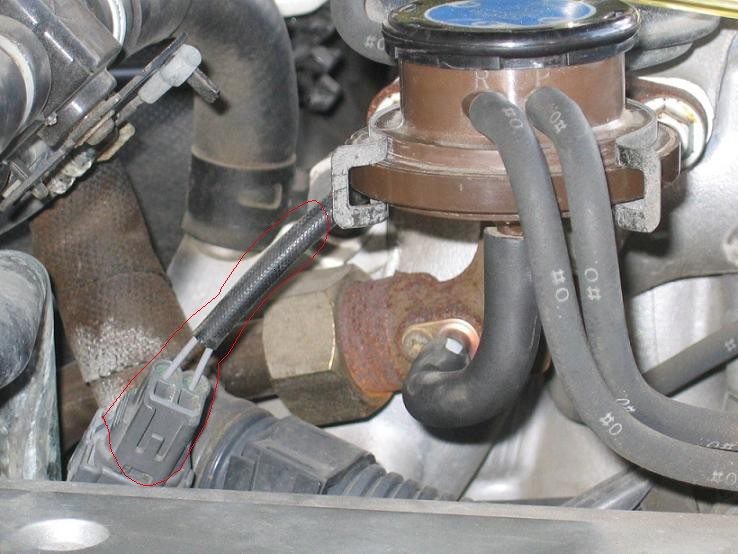 Well on the way into work this morning the check engine light turned off. I am calling C-Dan to order the FSM for my 94, so if it comes back on I will be able to locate the sensor. I will keep this thread updated if anything else happens.
2001 Landcruiser 100 Series - Addicted Off-Road front bumper w/ Rigid spots & floods, BIO step sliders, BIO rear carrier w/ dual swingouts, BIO diff drop, OME T-bars, Slee SOF2RH rear springs, Timbrens, Bilsteins, Tundra wheels w/ Nitto Ridge Grappler 285/75/18.
2015 Landcruiser 200 Series - build thread to come.

The light was on and off at first for me too, but now it has been on for the past two years straight and I just ordered a new EGR temp sensor, modulator, and VSV today. Good luck.
1994 6M1 FZJ80 - "Elsie" - 37th Anniversary Edition
2008 8M6 NHW20 - "Cosmo"
DEMOCRACY IS TWO WOLVES AND A LAMB VOTING WHAT'S FOR DINNER. LIBERTY IS A WELL ARMED LAMB CONTESTING THE VOTE.
​
WOLVERINES!
​

Just checked this morning and I have the same code "71". Newps, thanks for the the info. Whew... I thought I was going to be the only person with this problem.

While doing work at the shop two hose lines from the modulator were left disconnected. Problem fixed. Man. I wish they were all this simple.

In my case, the 71 was thrown by the port that goes from the valve down across the top of the intake being plugged right where it opens into the top of the throttle body.

Double check that; it''s far cheaper than all those other parts. I replaced them all anyhow, but they were not the issue.

You could probably pull the black intake hose that attaches to the throttle body off, shine a light in there, open the throttle by hand and use an inspection mirror to look into the body and see if that port is plugged. Mine had tons of carbon in it. You could most likely use some picks to break it loose of check the opening.

Replaced the Temp Sensor and the Modulator this past weekend. Seems to have worked so far for me. About 200 miles and no code yet...
1994 6M1 FZJ80 - "Elsie" - 37th Anniversary Edition
2008 8M6 NHW20 - "Cosmo"
DEMOCRACY IS TWO WOLVES AND A LAMB VOTING WHAT'S FOR DINNER. LIBERTY IS A WELL ARMED LAMB CONTESTING THE VOTE.
​
WOLVERINES!
​

Long time since I've seen you here. We missed you!

This is better news than I was thinking, I got a CEL on the way to work, I checked at work...code 71, I just fixed a code 28, I will check to see if there was much carbon, I did also clean the TB this weekend and noticed alot of buildup in the small vacc. pipes that go to the EGR vacc. modulator.
I will keep you poosted.
I <3 ih8mud
Brian Passey KE7TGH
wasatchcruisers 71 FJ40 Stinky - 94 FZJ80 Ryoku Ryu​
Un-named offroad/utility trailer project ​
Cruiser ring's anyone
UtahFirearms
​

any luck finding the issue? The dreaded CELCode 71 just came on my 80. Did a quick inspection due to it being night already and noticed the EGV valve left side tee is rusted and cracked. Not sure if thats my problem

YoGotti94 said:
any luck finding the issue? The dreaded CELCode 71 just came on my 80. Did a quick inspection due to it being night already and noticed the EGV valve left side tee is rusted and cracked. Not sure if thats my problem
Click to expand...

After struggling with passing emissions every time, even after replacing the whole egr system, cats, o2 sensors, etc... i ran across a thread where a guy put a BB in the vacuum line indicated by the blue arrow above (the one that goes out the driver side of the modulator "T"... I had failed emissions 5 times in a row (after trying all kinds of dumb things) It passed with FLYING colors.... Had been failing on NOx.. went from 6.5-7.8 down to 1.3ish!