So I engaged and disengaged the 4Lo a few times and then pressed the Center Diff lock button. I got the flashing center diff light and no engagement. So I tried to go back to 4HI. The 4Lo light went out, but it stayed in 4Lo, and the center diff light stayed flashing. I had actually had this problem once before but it reset after a restart and I was able to go back to 4HI. But this time, no dice. Ugh!!

I tried everything; drove around in 4low to warm everything up, trying all the gear combos, driving in circles, backwards and forwards, I actually drove a couple miles in 4lo and had the vehicle running for at least 30 minutes, multiple restarts, disconnecting battery, recharged battery, disconnecting and cleaning the actuator harnesses on the Tcase itself. I even ordered and replaced the main Tcase ground wire because it looked a little frayed. No luck.

Unfortunately the actuators can not be removed without removing the Tcase and splitting it open. At least, thats what the FSM says.

So I have to give credit for this fix to the great TROLLHOLE! Marshall Shepherd of Trollhole's Cruisers in Simpsonville, SC. Many of you know him, he's a great guy and does great work. Ive worked with him for years and he's worked on many of my Cruisers. I called and asked him if he knew of any tricks to fix this. Asked if I tapped on it with a mallet, and I hadn't and also suggested I set a heater up underneath the truck to warm it all up. (He also mentioned he had freed up the center diff on an FJ Cruiser by getting it in an off camber position and twisting it up a little and hitting the switch.)

So I jacked up the left rear and right front tire to tweak it all a little bit. I removed the balancer/dampener thingy, the heat shield and the skid plate/Tcase exoskeleton and disconnected the harness. Set up the space heater pointing right at the actuator assembly for a couple hours. I tapped on it with a rubber mallet several times, and finally took a heat gun to it.

Then I crossed my fingers and pressed the start button to ACC without starting it. Not sure why I didnt start it all the way, maybe because I was still on jack stands, but thats what I did and VOILA! No flashing diff light and 4Lo light back ON! I dropped it down, took it out and switched to 4Hi and bingo! It worked.

I guess if that center diff actuator gets jammed, it sends a fault code to the 4WD ECU and prevents any switching between Hi-Lo.

The actuators themselves are plastic gears inside a plastic housing all caked in grease. It reminds me of the infamous power seat motors and gears on the 80 series. Over time, that grease congeals and gets really sticky, almost like glue. I think cold temperature just makes this problem worse. Maybe its best to just leave that heat shield off, especially if you live in a colder climate.

If you are ever stuck in 4Lo, the first thing I would do is remove the four bolts for the heat shield, that bolts onto the exoskeleton. The actuator assembly sits in between the two exhaust pipes where they come together, so if you were in a jam, maybe the heat from the exhaust would be enough to soften the grease inside the actuator and free it up.

I also learned from the FSM that the temp sensor inside the actuator will alter the amount of current to the actuator depending on the temp. Evidently, it still wasnt enough juice to free it up with that sticky grease inside, it needed some extra heat.

Anyway, maybe this keeps someone from getting stuck in 4Lo miles from home, or keeps them from having to take it in to the dealer for a hefty repair bill.

Pic of Tcase with balancer/dampener removed, the heat shield removed, skid plate/exoskeleton in place, and the black plastic center diff actuator and Hi-Lo range actuator in the middle..... 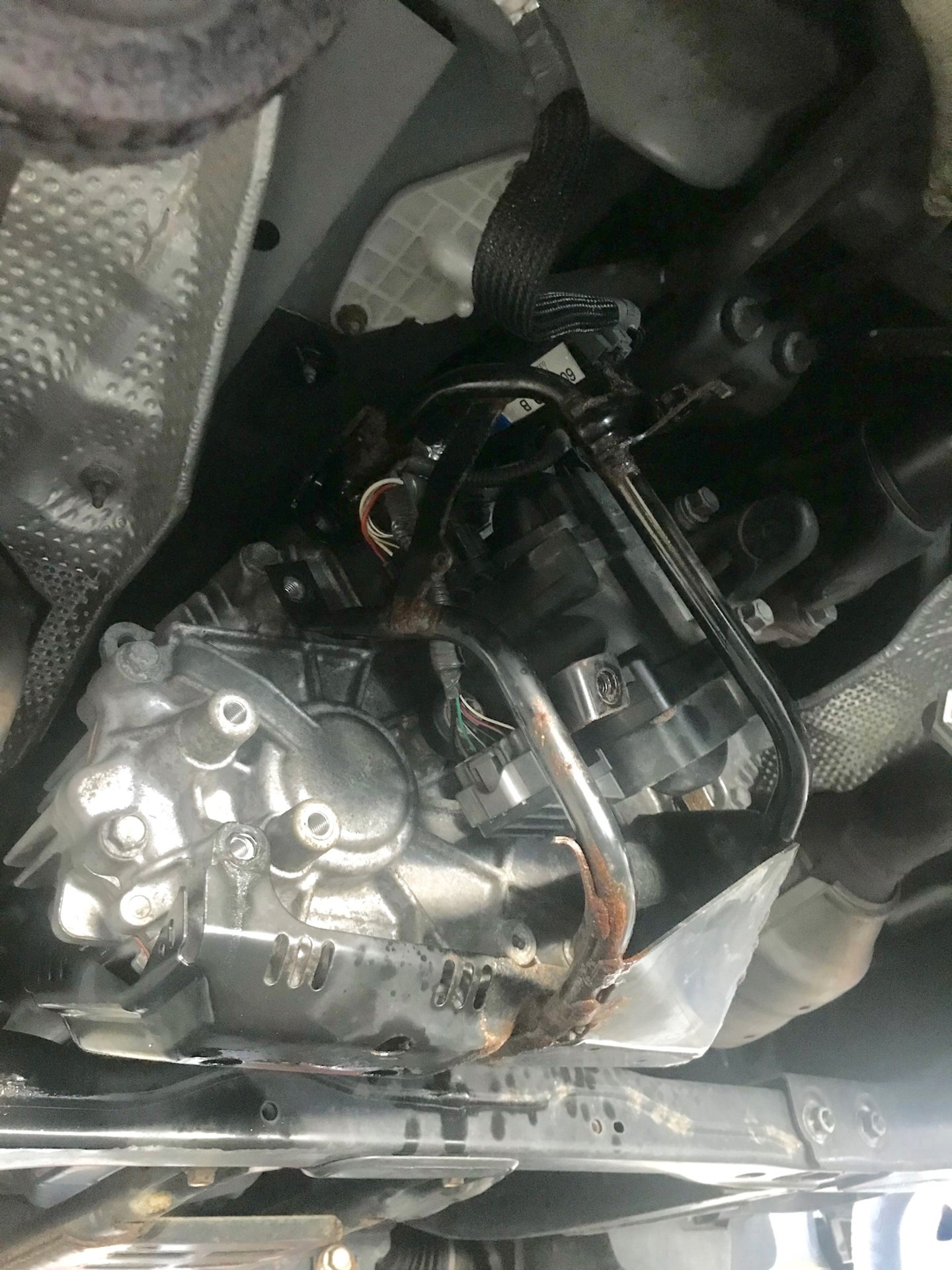 Thanks for sharing great tip!

When I bought my LX a few years ago I pointed out to the dealer that the center lock would not lock...it would just keep flashing...So part of the deal was to send it to a lexus dealer and have the actuator replaced, after that I made sure at least once a month I would cycle the center locker and 4 low,after about a year one day it got stuck in 4lo and then all the lights that you can possibly think of came on the dash...i tried every method to get out of 4low just to make sure it wasnt binding in the tcase or any tension on the gears P N D R rocked it back and forth, turned of the car waited 10 mins...i even disconnected the battery! hopefully everything would reset...but no go.
it had to be towed to the dealer. ( wish your thread was posted at that time )

From this experience I was always hesitant to engage in 4low thinking id be taking a chance not to get home hundreds of miles away from home...I basicly lost confident in the LX... it is sold as of yesterday.
LIFE IS TO SHORT....DRIVE YOUR LAND CRUISER EVERYDAY....

Thanks for the write up! Glad you got it sorted.

@89cruiserfj62 Did you replace this center diff actuator? Curious if that resolved your future issues?
2011 LX570 - Stock, for a minute.

Keep using it. Rainy days is my reminder. I went about a year in the 4Runner without engaging 4 wheel or lo. Had a b!tch of a time getting things to unlock, especially the center diff. Now, with exercise it pops in and out like a charm.
78 FJ 40 R.I.P.
4Runner
Lexus GS
Tundra Ltd.

phatairman said:
@89cruiserfj62 Did you replace this center diff actuator? Curious if that resolved your future issues?
Click to expand...

The old "rust if you rest" issue. Had the joy of dealing with this annoying gremlin last couple of days. Been about a year since I decided to push the center diff just to make sure it functions properly. Of course it didn't engage the first twenty times I tried, but after a few rounds of turning on/off, lights flashing, 4lo going in not coming out, the usual song and dance, it finally engaged. So I stayed in the gravel lot I pulled into and drove around in 4HI back and forth at a steady 35 mph locking and unlocking until it changed smoothly every time, which didn't take long. Like the majority of the threads on this topic you just have to remember to exercise both the 4Low and CD every now and again if you basically drive to the office and back everyday. I use 4low just about everyday right now during deer season and due to the continuous use I never have issues with it engaging/disengaging the rest of the year. The most annoying part is trying to find a spot to test in town. I plan to visit this lot at least once a month since its by the gas station I frequent. So long story short push the f****** button...it will work eventually.

As for the OPs suggestion for keeping the heat plate off, that heat plate was the only thing missing on the entire vehicle when I purchased it and I didn't realize it until I did my second oil change. Since I had a hard time with the 4Low/CD when testing the truck before purchase (prior owner never used it off pavement), I wonder if that was an attempt from the seller to get it to work? Anyway I had the opposite thought, thinking that without the heat plate in place, the actuators were not getting hot enough to move in the caked grease so I ordered a replacement ($50) and put it back on. I can say that 4low will engage now even in cold startups however I use it more often than the CD.
S

Mixelplix said:
Thanks for the write up! Glad you got it sorted.

Just venting a little here: That 4wd low switch is my most despised thing about the 200 series. After owning an 80, a 100, and quite a few 4wd trucks and jeeps I can't imagine how Toyota could justify an electrically actuated 4wd low in a vehicle they consider to be an off roader.
Click to expand...


Hi. Yes same here. This switch is designed for people who never go off road. My 200 has failed badly several times. The electric activator motor failed and had to be replaced at $3,500!. Then the air induction system failed so nothing worked again. Another $3,500. Then the 4wd switch failed - $470 to supply and install. The vehicle has never missed a service. All of this is totally unnecessary of course - I've never heard of a simple lever failing (like in all Cruisers before this one). I think Toyota need to rethink what Landcruisers are supposed to be all about - tough, reliable and safe off the road. I'm thinking about trying to repurchase my old 100 and and do it up - it will be more reliable.

Soldier said:
Hi. Yes same here. This switch is designed for people who never go off road. My 200 has failed badly several times. The electric activator motor failed and had to be replaced at $3,500!. Then the air induction system failed so nothing worked again. Another $3,500. Then the 4wd switch failed - $470 to supply and install. The vehicle has never missed a service. All of this is totally unnecessary of course - I've never heard of a simple lever failing (like in all Cruisers before this one). I think Toyota need to rethink what Landcruisers are supposed to be all about - tough, reliable and safe off the road. I'm thinking about trying to repurchase my old 100 and and do it up - it will be more reliable.
Click to expand...

If only we could get the 70 series here in the US.
You must log in or register to reply here.