A month or so ago I got several frantic texts from my neighbor while I was out of town. My 1997 LX450 was in the garage going ape. Horn beeping, lights flashing, etc. It wasn't long before I got several similar call from the local police department. The only set of keys was locked inside and the security system was engaged.

Eventually, the horn burned up, the battery died, and the neighborhood was able to get some rest.

I got the door unlocked, battery charged, and rig started.

Anytime the driver's door is shut or the door shut switch/sensor on the side post is depressed then there is an audible blinking switching sound coming from somewhere around the firewall. The red security light flashes in synch with this noise. I'm assuming the horn would be beeping if it weren't fried.

It will not start when this is going on (turns over, sounds like hell). If I hold the driver's door open it starts fine.

How do I make it stop this nonsense?

I have tried various forms of disconnecting the batter and security box under the driver's seat with no luck. 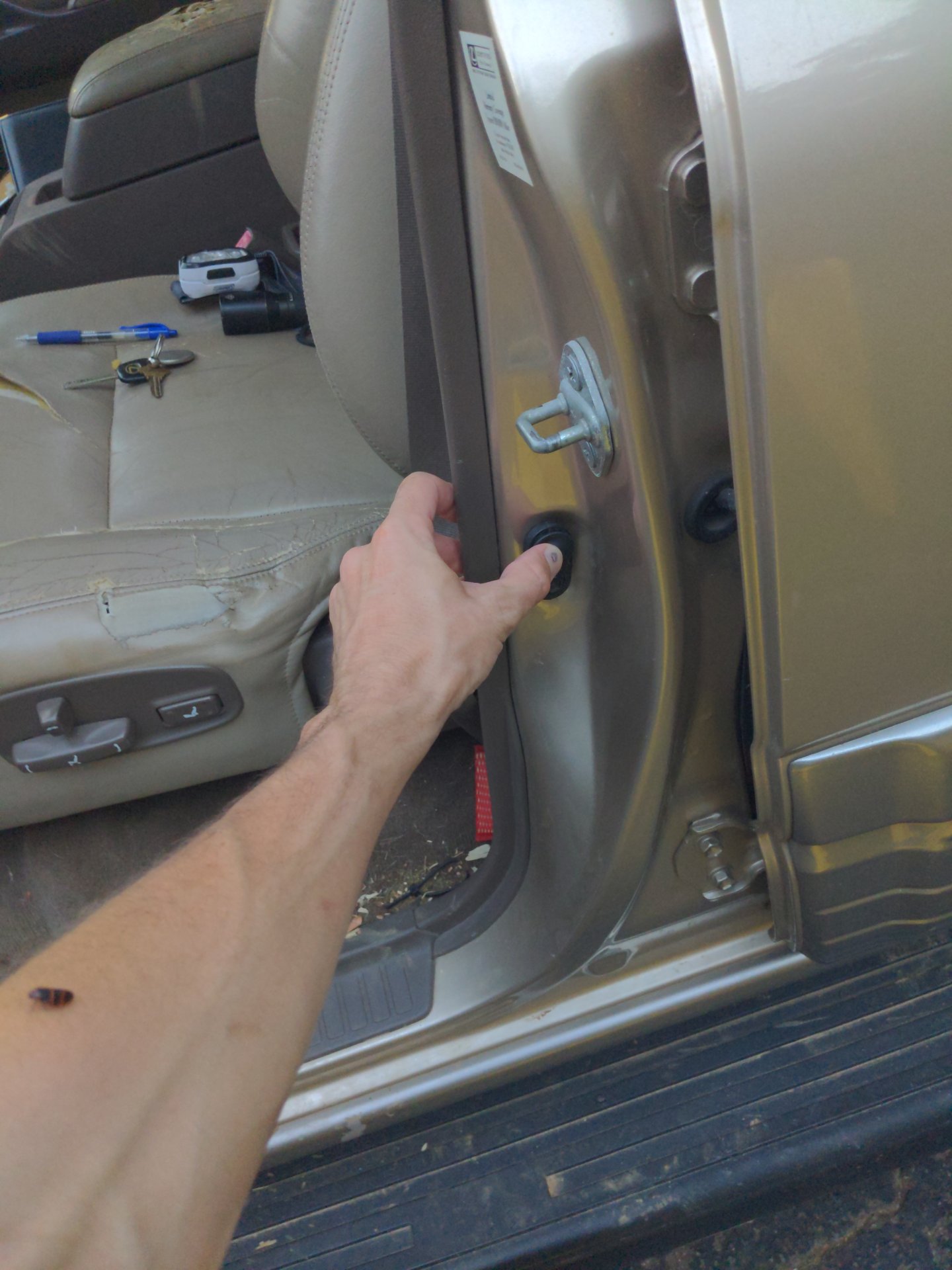 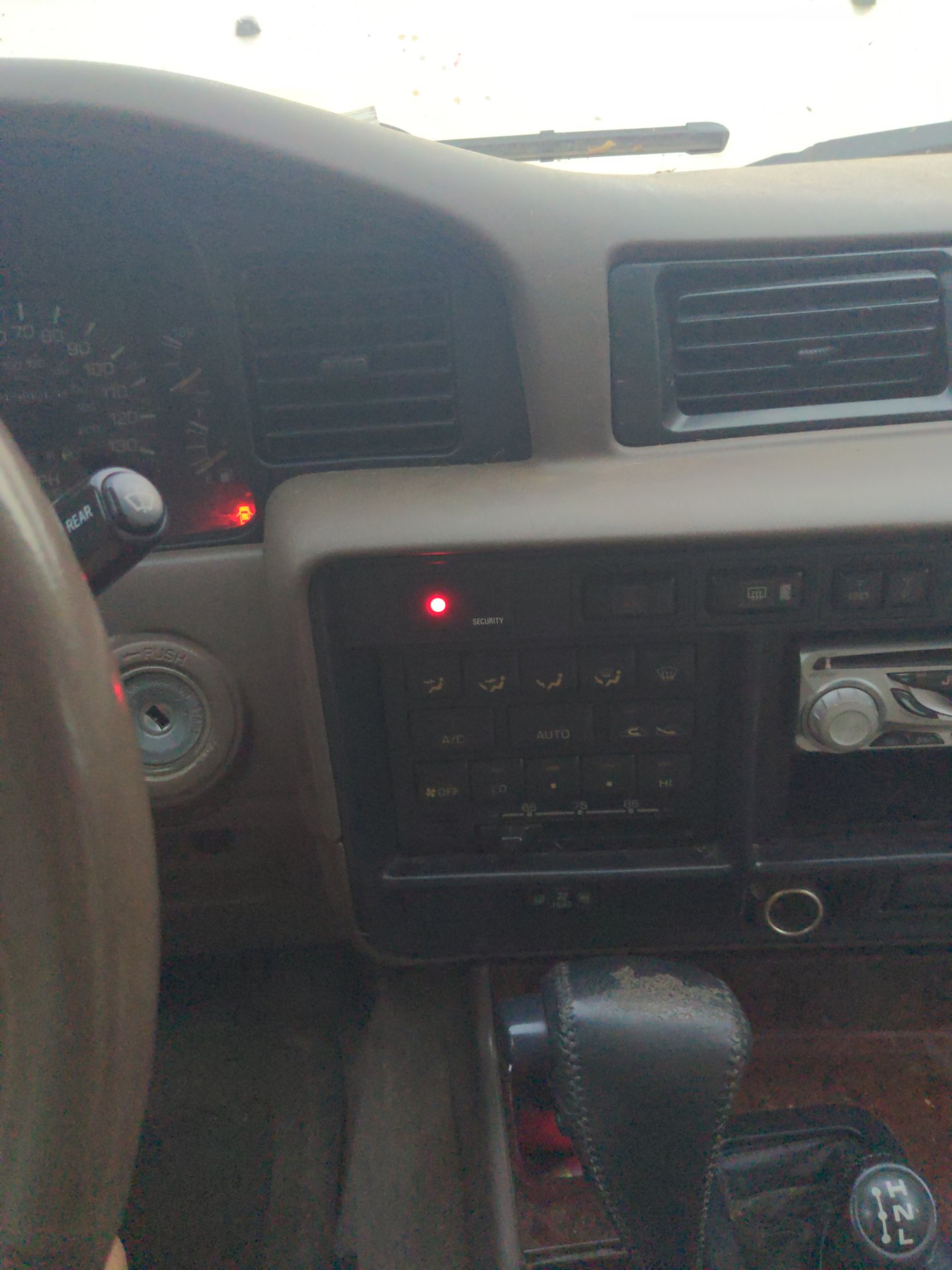 Disconnecting the control box under the seat would only kill the alarm/horn but the starter will not work as the alarm contains a starter kill circuit. The alarm harness needs to be removed and the vehicle connectors need to be mated back together. There is a good chance one or more of the door switches is failing although the age of the alarm it just might be at the end of it's life.

When I bought my truck I had no FOB and had never set the alarm.

I came out of a store picking up dinner one night and my parking lights were on and the truck dead. The alarm decided it would go off and disable it at that random time.

I unlocked the truck with a key and then disconnected the battery for 10 minutes to disable the alarm.

I put it all back together and drove home.

After dinner, I ripped out the alarm by the roots and have not ha the problem since. The "factory" alarm on these is known to just freak out one day and do things like this. It took me about 4 hours to remove mine, but I REALLY took my time and I did a few other things while I was in there (Pin 7 Mod, Added CDL switch, replace steering column firewall seal)

Sounds like I need to plan a little removal project. I'm much better at destroying things than putting them together.

I've noticed quite a few threads on alarm removal in my searches. Is there one that's the gospel or better than the rest?

wilburray said:
Sounds like I need to plan a little removal project. I'm much better at destroying things than putting them together.

I've noticed quite a few threads on alarm removal in my searches. Is there one that's the gospel or better than the rest?
Click to expand...

I read a couple thread s for reference, but it's mostly just pull the drivers seat, then take your time and trace the harness back from the box under the seat, then unplug connectors and replug them as you go. You cannot cross-plug connectors, as they are NOT interchangeable. Make sure you look inside each connector for corrosion and maybe have some small zip ties and dielectric grease on hand for sealing the plugs inside the DS A-pillar behind the kickplate. I found it easier because I removed the steel plate under the steering column as well which allowed a lot more visual access under the dash, but it added time. I needed to do that to do the Pin 7 mod.

BTW, you may encounter a gray wire that crosses over through the dash, under the console, then clear over to the glovebox. It's not actually attached to anything. That is the antenna wire for the FOB. That was what took me a fair amount of time because I removed the center console, the glove box, and all that chasing the one wire. Knowing that now, I would have just cut it off, but since I needed to know what it was attached to on the other end, I chased it the full length.
You must log in or register to reply here.