The original V8 to V12 conversion was carried out at Korman Autoworks and left the car with a 500hp, 6 liter Hartge built M73. The car, in this configuration, was featured in the Feb 05 issue of Performance BMW magazine. A friend bought the car and took the motor for his E34 M5, leaving a hole that was filled by the current M70 which was installed in 2007/ 2008 by Koala Motorsport in Cleveland and sourced from one of their own E32 750s. This isn't some backyard hack job, but rather a pretty clean install. Any BMW mechanic should be able to easily work on this car as easily as if it were a stock 5 or 7 series. Was in Florida, then Texas until 2007. Spends winters here in the garage. Hasn't seen snow/ salt.

A bunch of stuff was replaced when Koala put in the M70 in 07/ 08, or soon thereafter during shakedown. Major parts replaced included:
water pump
alternator
rear main seal
oil pump
long list of other small items (would need to dig up the invoice for additional details)

The Dinan Stage 3 brake conversion is simply the BMW Nurburgring package, I believe. The car handles and stops very well. The ride is definitely firm, but not harsh.

Nice, very clean sounding stereo system, although the sub, amps and crossovers occupy a significant portion of the trunk. VDO gauges have been added to the center console and keep tabs on oil pressure, oil temp and water temp. Another very nice interior upgrade is the front sport seats in the correct parchment color.

Aesthetically, the car is in very nice condition inside and out. The biggest flaws are the wear on the driver’s seat (edit: repaired now) and rock chips on the front end. The motor isn’t particularly pretty to look at, but it seems to be pretty solid. It leaks a little oil and it burns a little oil, but no more than you’d expect given the mileage.

There are a few maintenance items lingering on my to do list:

This was a southern car and it has been garaged through the winters here, so there are no rust issues. I'd say that it's rust free, but I haven't been underneath it for some time. That being said, I'd be very surprised if you found a spot of rust on the car.

Some of the issues noted above will be addressed, others will not. The new owner will have pretty good idea of what needs to be done though.

This actual car is featured in the February 2005 issue of Performance BMW!

A one of a kind no expense spared automobile.

Outstanding, one of a kind, 1995 BMW E34 with nearly 500bhp on tap thanks to a Hartge modified BMW V-12 6.0L engine. This car is not just a pretty 530i with a monster motor stuffed under the hood, but a pristine automobile professionally completed and sorted by Korman Autoworks in Greensboro, NC. In addition to the heavy modifications under the hood the car has a custom drive shaft, Dinan Stage 4 suspension, Dinan Stage 3 brake conversion, BMW 750 power steering pump, BMW 850 shift tower, relocated brake booster and master cylinder etc.... Let's just say the vehicle is modified and done correctly with an open checkbook. Just over 13,000 miles have been driven with the new V12 engine configuration without trouble. We actually have a signed copy of a hand written letter from Ray Korman to the car owner describing the awesome performance of this machine. An line from the letter reads, ÃƒÂ¢Ã¢â€šÂ¬Ã…â€œI have built street turbo motors over 400HP but never anything with the incredible response of this motor throughout the whole rev-range. Heck, I've never driven a full race car with this much performance - and that includes an M1 ProCar!ÃƒÂ¢Ã¢â€šÂ¬Ã‚Â[FONT=細][/FONT] - Ray Korman, Aug 15th 2002.

Our humble opinion: I'm only going to say this once - this car is fast, really fast, like I'm scared to drive it fast, like you'll never in your life drive anything this fast, like you better have a good attorney fast, like the only thing faster has wings and jet engines or perhaps sits on a launch pad!

Enough about the performance - let's talk about the condition of the vehicle. Pampered does not begin to describe this E34. Since purchased new it's had nothing but the best. A collector in Houston, TX currently owns the car, but the vehicle is in the warehouse at the moment until we find it a new home. Owner has had the privilege of parking several special BMW's in his shop and knows how to care for them properly. Obviously, with so much money tied up in an automobile like this it was not a daily driver, received an overabundance of maintenance, and was kept sparkling clean. Car is in exceptional condition.


Let me know if you're interested, have questions, want pics, etc. I'm happy to entertain offers. Thanks! 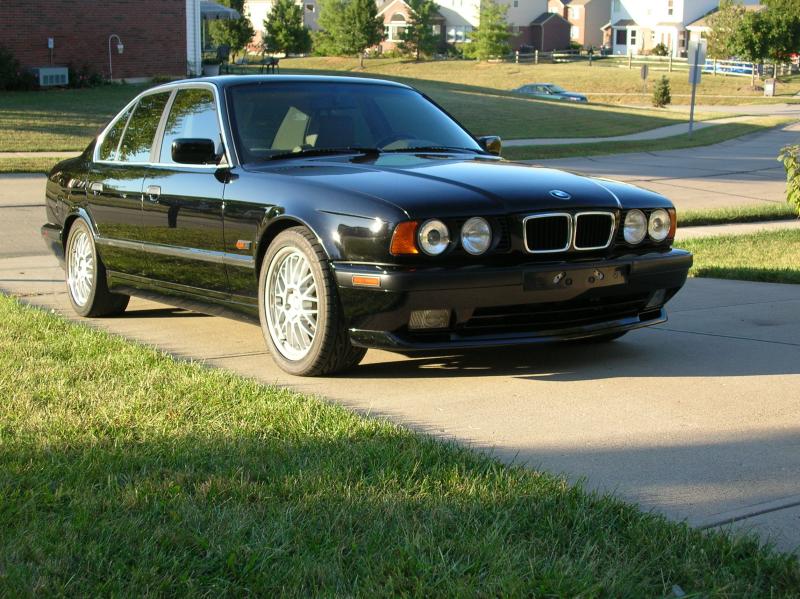 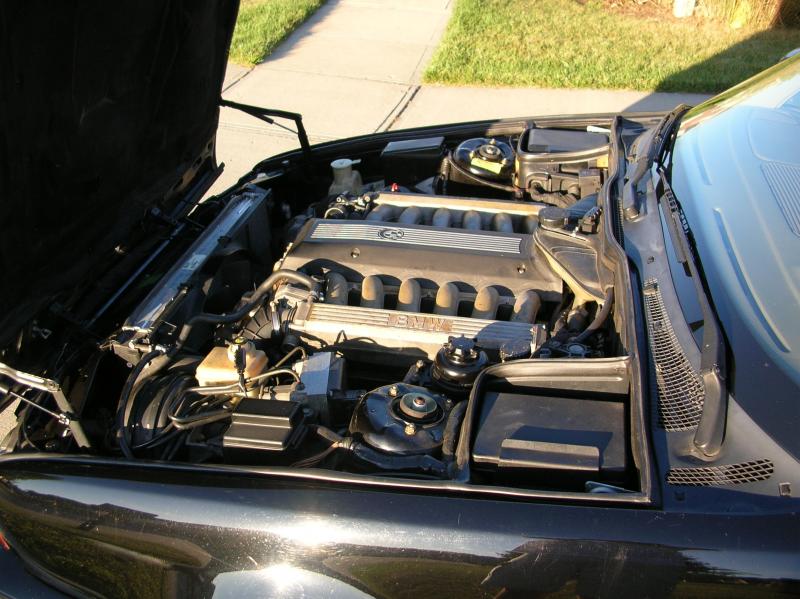 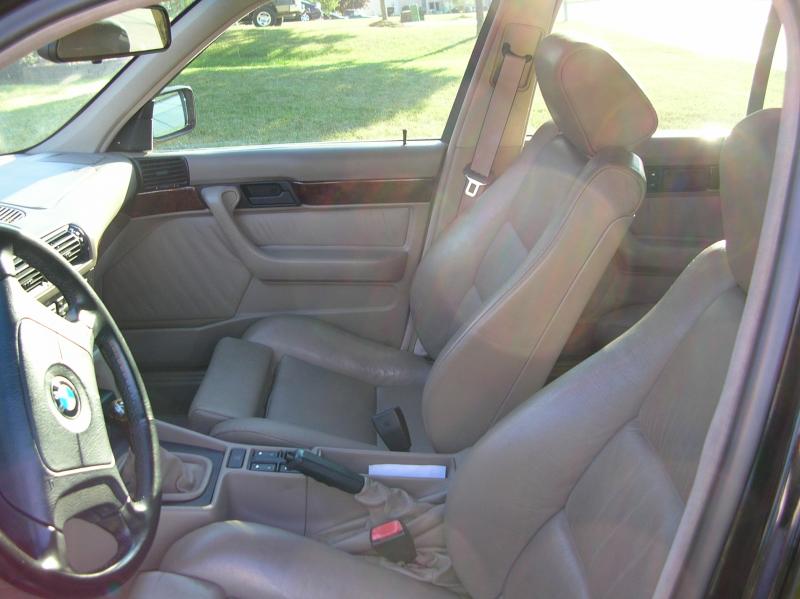 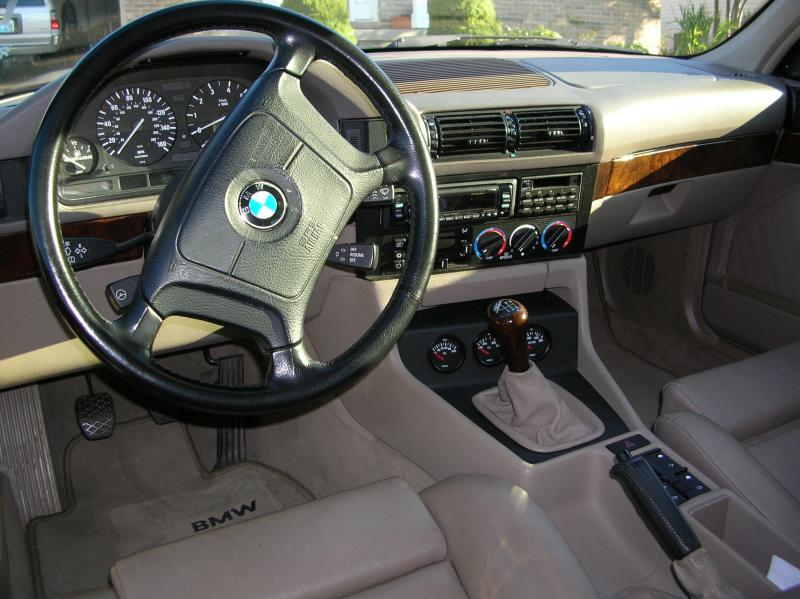 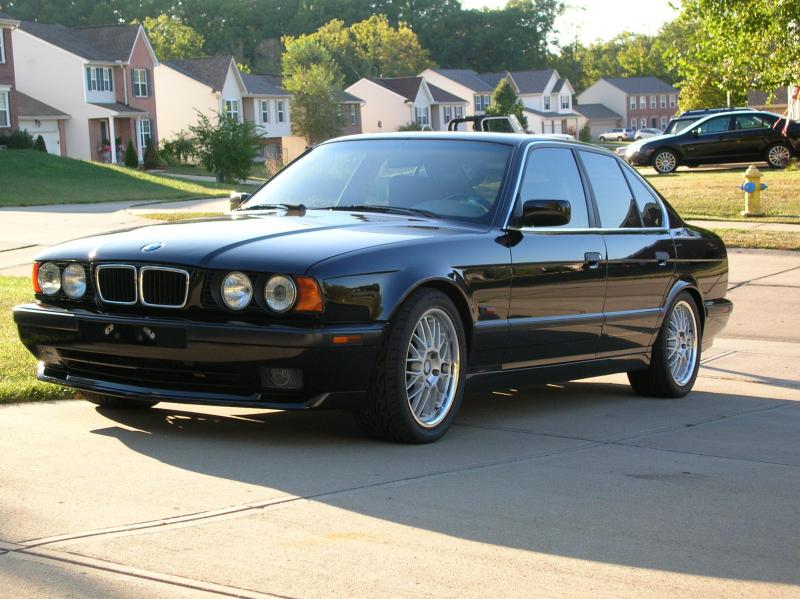 edited to reflect the following:

Picked the car up from the shop this afternoon:

Dropped a grand into this car today; somebody buy it!

I know it probably sold but I am interested in the BMW! Thank you
Aaron
J

So, failing to sell this car before bad weather set in back in 2013, i put it up for the winter. That was nearly 2 years ago, and it just came out of hibernation a few weeks ago. Oil change, new battery and some other minor attention and I think it's ready to go. Drove it to work all last week (75 miles round trip every day).

Car is still for sale. I'd love to unload it before it needs to get stashed away again for the winter, so I'm a pretty motivated seller at this point. $8k will take it now.

Thats a bad-ass car, and dirt cheap for how clean it looks!!
J

Yeah, it's in pretty nice shape; not perfect, but a clean solid car.

Totally different from a Cruiser; fulfills other needs if you know what I mean. There was a period a few years ago while it was serving daily driver duties and I was averaging a ticket every six months. They kept getting me on the same 1 mile stretch of I75 north of Cincy. But I just couldn't help it! Only got one ticket in a Cruiser, ever.

Would welcome a trade or partial trade (in either direction) for a 40. One of the reasons for selling is to free up space and $s for a daily driver 40. So would consider a 40 in good to very good condition. Small lift, v8 or other minor mods ok but other than that, the closer to stock the better. 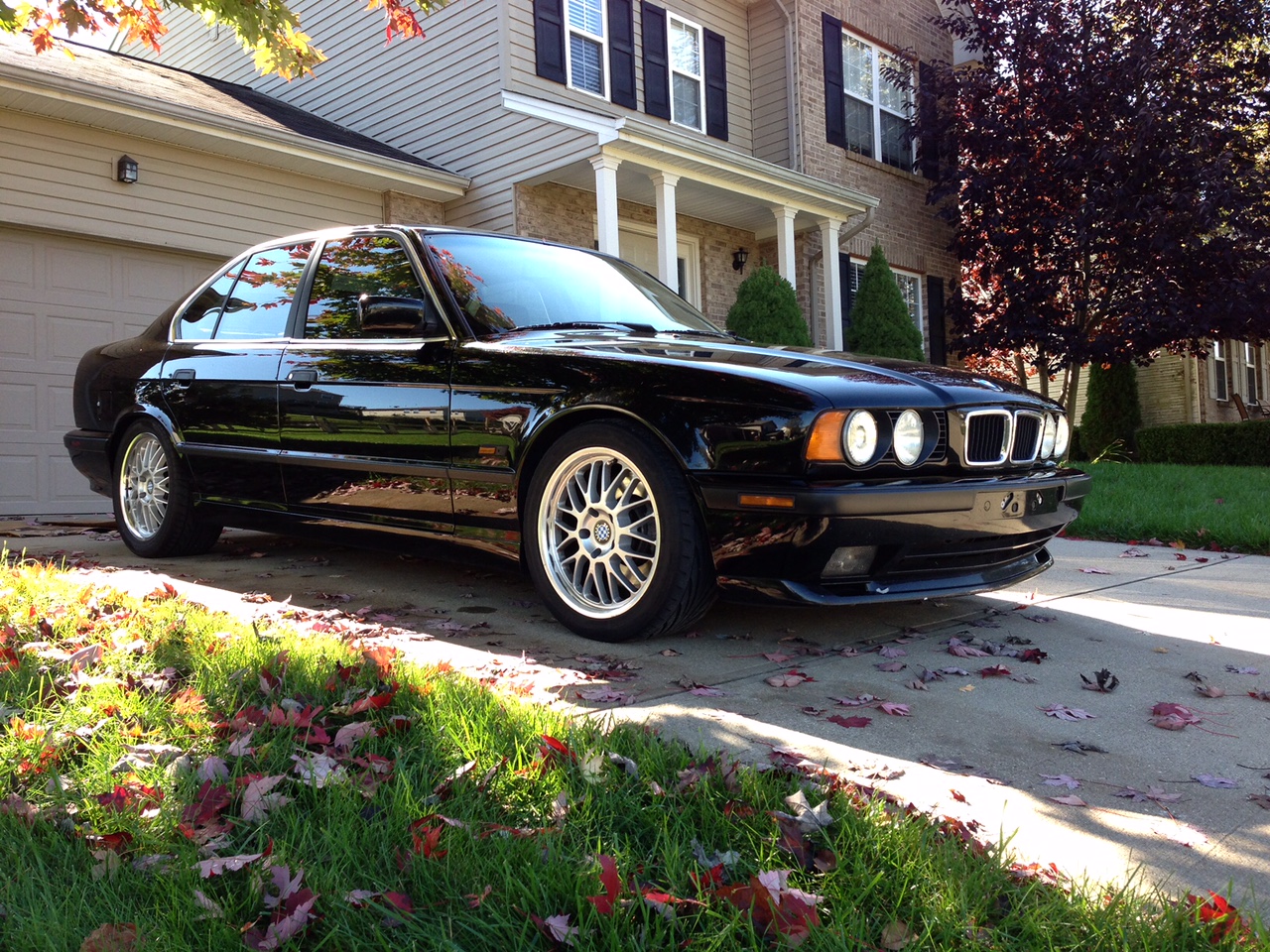 This is exactly what ive been planning to do for a while, clean E34 roller with the M70 swap. GLWS, if you were looking for a clean 80 id offer you mine. 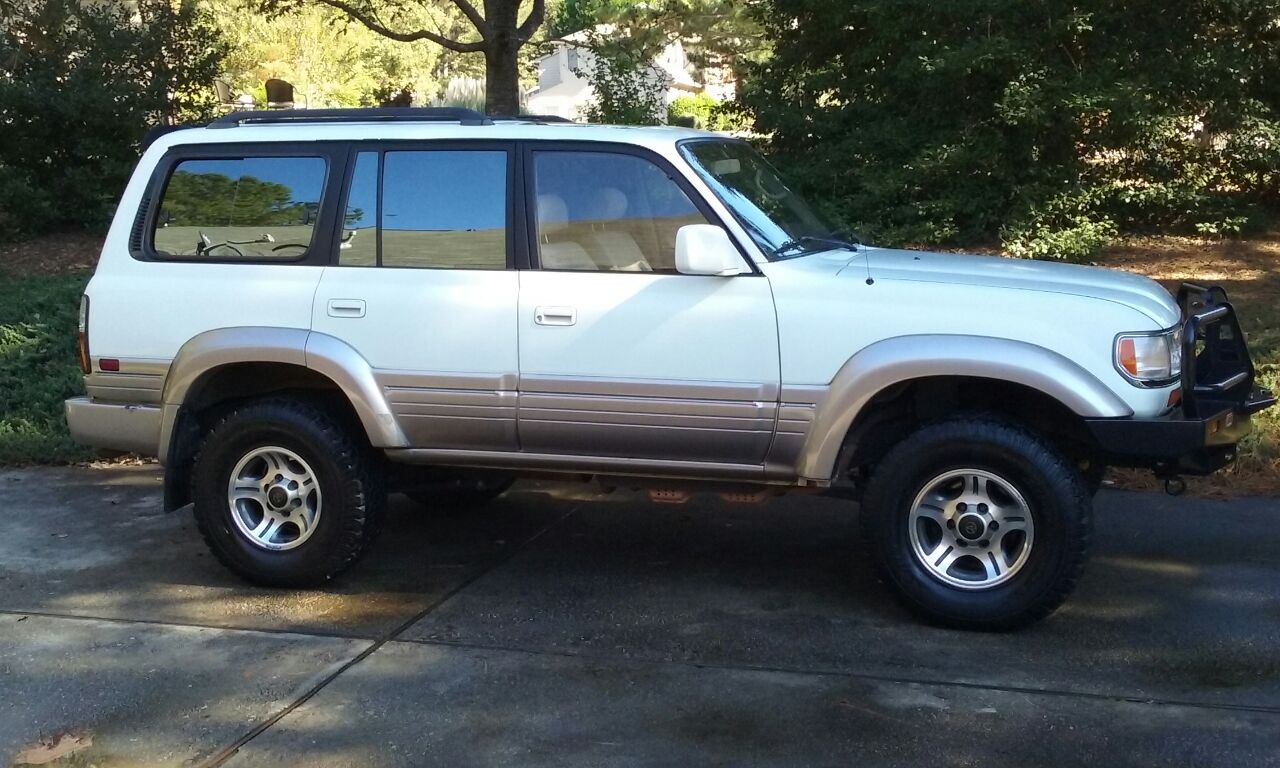 ExpoGeorgia said:
This is exactly what ive been planning to do for a while, clean E34 roller with the M70 swap. GLWS, if you were looking for a clean 80 id offer you mine.
Click to expand...

Sorry for the late reply, I've been out at sea since my last post here but will be back in port this Thursday. Its a 97 LX450 with about 224k miles, no lockers but super clean. Reciept folder is about 1 1/2 inches thick with service history from Lexus and recently ordered parts (valve covers, OME lift, etc). OME 2 inch lift, new BFG KO A/T's, ARB, and IPF lights yet to be installed. If your interested I can send more pictures when I return to base. Thanks
J

PM sent.
You must log in or register to reply here.