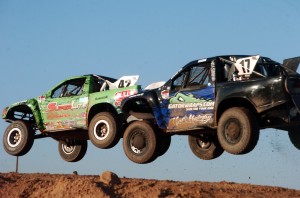 Huge names from the motocross and off road championship racing world will buckle in and launch through the air on the custom built track that circles in and out of the arena.* Nine trucks will race side by side with drivers who have a fierce competitive nature.* The single seat truck chassis’ are equally set up with Mazda engines prepped for competition by Exotic Engine Development making it a race of the racers, not necessarily of the rides.* With this line up of drivers and Cameron Steele as the announcer, there will no doubt be edge of your seat spectacular action!

Come early on Saturday night for an autograph signing session with these legendary drivers from 5pm-6pm at the Speed Technologies Pit area at the Fairgrounds.* Don’t miss your opportunity to meet some of the worlds greatest racers.

Competitors are encouraged to sign up for the different sanctioned events.* Additional information and Entry Forms can be found on the Octane Fest website.* CalROCS will be hosting the Rock Crawling, NMXD will be hosting the Quad Wars, Tuff Cross and Motocross event, and Speed Technologies will feature the SuperLite Invitational on Saturday night. Additional events will be hosted by Octane Fest presented by the Northern Nevada Toyota Dealers.

Octane Fest is the largest multi-discipline motor sport event in Northern Nevada. Tickets for the event are $20 for the weekend Jamboree Pass (fairgrounds only), or day passes for the fairgrounds are also available for $10/day. *Top Gun Raceway tickets are $10 per day and include pit passes. There is no admission for the Hurricams Car Show.

As the founder of Speed Technologies and reigning champion of the short-course SuperLite series (part of the Lucas Oil Off-Road Racing Series), John Harrah probably has more experience behind the wheel of a SuperLite truck than any other driver on the planet. A versatile driver with experience in short-course truck racing as well as motocross and desert racing, Harrah will be looking to represent Speed Technologies well at the inaugural SuperLite Invitational at Octane Fest.

Speed Technologies’ Jeff Ward is coming off a strong short-course off-road truck racing rookie season last year in which he took second place overall in the Unlimited 2 division of the Lucas Oil Off-Road Race Series, as well as the Rookie Of The Year title in that class. A highly decorated motocross and supermoto racer, Ward has put in plenty of time behind the wheel of Speed Technologies’ SuperLite trucks and will be looking to stay out ahead of the other motocross guys in the SuperLite Invitational.

Ricky Johnson has won more motocross and supercross races than almost any other rider on the planet, ever, including 61 AMA national wins, seven of which were national championships. An inductee of the Motorcycle Hall of Fame, Johnson retired from motorcycle racing in 1991 after a career-ending broken wrist; however, he was far from done. Johnson quickly transitioned to four-wheel racing, competing in SCORE off-road desert events, including victories in the Baja 1000 in both 1997 and 2003. In 2008, Johnson joined the Barlow Motorsports/ Team Red Bull off-road team and competes mostly in the TORC Pro-2 Truck division. With such a diverse racing background, look for Johnson to be pushing his SuperLite truck to its limit in the SuperLite Invitational.

Beginning at the age of 12 in motocross, Johnny Greaves has won races and championships in every level of competition. At 23, he switched to four wheels and soon earned success while buggy racing in SCORE off-road desert and SODA short-course off-road series (the precursor to Championship Off Road Racing – CORR). Johnny Greaves now has a total of 51 CORR Series race victories since 1998 and leads the way in that category, giving him the title of the “winningest driver in off-road short-course racing”. He has won 15 times over the last two seasons – seven wins more than anyone else, including his next closest rival who has eight victories over the same two seasons. He was named the 2006 Driver of the Year.

Seven-time AMA Supercross Champion Jeremy McGrath got a taste for four-wheel off-road racing action in 2009’s Lucas Oil Off Road Race Series, and likes what he’s experienced so far. He is often referred to as “Showtime” or “The King,” meaning the King of Supercross.* Jeremy now lives in Encinitas, California with his wife Kim and daughters Rhowan and Bergen.* Still competitive in Supercross, he is racing off-road trucks in the Pro*2WD*division of the TORC Series and occasionally tries his hand at Stock Car racing.

Turning pro at age 17, Brian Deegan rode his way onto a supercross team. In 1997 at the LA Coliseum, Brian Deegan won the 125cc main and in true rebel fashion, ghost rode his bike across the finish line. This was the beginning of what we know today as Freestyle Motocross. Deegan founded a group called the Metal Mulisha and despite numerous broken bones and almost dying three separate times, went on to win 10 X Games medals. Currently Deegan is determined and focused on progressing his career from two-wheels to four-wheels, having formed the Rockstar/Metal Mulisha/Lucas Oil team which has already made it onto the podium twice in the Lucas Oil Off-Road Series. With his aggressive style and hunger to make a name for himself in short-course racing, don’t expect Deegan to hold back at all in the inaugural SuperLite Invitational.

Another legend from the freestyle motocross world with podiums at all of the most important freestyle motocross events, Twitch made his first appearance in short-course off-road racing in the SuperLite division in December 2009. Twitch and his Rockstar/Metal Mulisha SuperLite truck #88 were up against a seasoned SuperLite field trying for a $20,000 purse, with $10,000 going to the top spot. Twitch qualified sixth on Saturday, which put him in the Pole starting position for Sunday’s race. In his first race ever, Twitch held his ground and was in the top three for most of the race. Unfortunately some mechanical issues ended his race, but he was pumped and will definitely be battling hard at the SuperLite Invitational.

A champion desert racer from a true motorsports racing family, Roger Norman founded Norman Motorsports in 2008 to facilitate his quest to race in the unlimited class in the Score Desert Racing Series. In the first year they won the Primm 300 and Baja 1000 overall, also finishing second in the Score points championship. In 2009 they had podium finishes throughout the year*and finished second overall in the legendary Baja 1000.*Wrapping up the 2009 season with back-to-back second place finishes in the Score Trophy Truck points championship. The first quarter of 2010 is looking bright for Norman Motorsports. At the Las Vegas Mint 400 the team qualified number one, started from the pole position and led the 61 unlimited competitors*from start to finish. With his experience in the desert racing, Norman should feel right at home in the unpredictable world of short-course SuperLite racing.

For Additional Information go to www.octanefest.com

Team Nitto Tire Sweeps the Podium at King of the Hammers

BFGoodrich Racers Reign at King of the Hammers