Made it to Tuscon this afternoon. Three 800 mile days and a metric butt-load of bugs but great weather except for the last day when I was constantly facing into a 20+ mph head-wind keeping me out of OD most of the time. Took a side trip off of I-25 in NM to check out an old Army garrison in Apache territory in some of the vast desert there - pictures will have to wait since I don't have a way to download photos.

Wish I could be there with you. I have always wanted to see some of those bone yards. The history in some of those planes is amazing.
Bay to Blue Ridge Cruisers BBRC
Capital Land Cruiser Club CLCC

Tim, It sounds like you are having fun, stay safe and tell us all the stories when you get back, at least the ones you can tell... I know you have been really looking forward to this trip for a while, enjoy it!!

What Rocky Mountain Land Cruiser specialist and his hundy got IPOR'd? Got pics but must wait to see them... ;p

Vehicles there were over the top. Some really talented builders out there; my truck was next to the AEV booth - they, all the vendors for that matter, do some really impressive work, and some truly innovative products were displayed.

Desert trails were pretty awesome; due to an unsusal amount of rain this past winter the desert was a palate of color. Weather was great; although hot during the day it got to the mid-50's at night and very clear. Not the stuff most of you would be challenged by since it was mild trail riding but it was some pretty impressive scenery and suitable for family adventures. Rode with a RHD H/B(?) turbo 62 from Alberta BC that brought their 7 month old and another Tacoma owner from the same place in Canada. Thirty states and 14 countries represented. The only other people we saw were the occasional Border Patrol truck or OH-58 checking us out.
2001 Tacoma - Ex-Cab, 3RZ, AT, SAC, 5.29s, ARB FR/RR locker & front bumper, Warn M8000, IPOR sliders & DeMello/IPOR rear bumper, IPOR tire/fuel can carrier, IPOR Radius Arm FR Susp, snorkel, CanBack, ICON/ALCAN suspension, LC80 wheels, 315/75/16 BFG MT, and...
2003 Prius - Carbon Offset for the above

Okay, I finally uploaded some pictures that I took. The lesson I learned is always bring John on these trips - a good photographer is critical to success.

The trip was taken over 2 weeks, 15 states, the best part of 5,000 miles (note: zero-out the trip computer before you leave, not 3 days before you reach home), and a lot of back-roads. Stopped for 2 days in Tuscon and stayed at Davis-Monthan AFB to visit the Pima Air Museum and AMARG (aircraft "boneyard"). Over 300 aircraft, some of the only ones of their kind left to view. Pima website Home 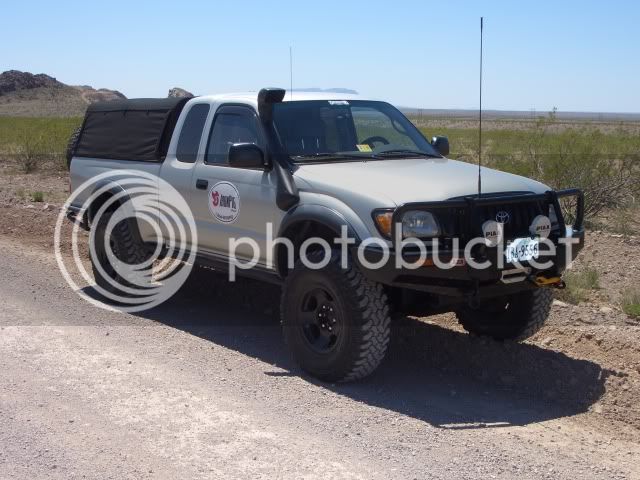 Stopped along the way to the Overland Exposition site in Amado, AZ to check out a couple historic battle sites in Apache country. Shameless IPOR plug on the door is their new magnetic-dining placemat, especially engineered for overland/expedition travel. No kidding, this gubermint engineer I know told me so. 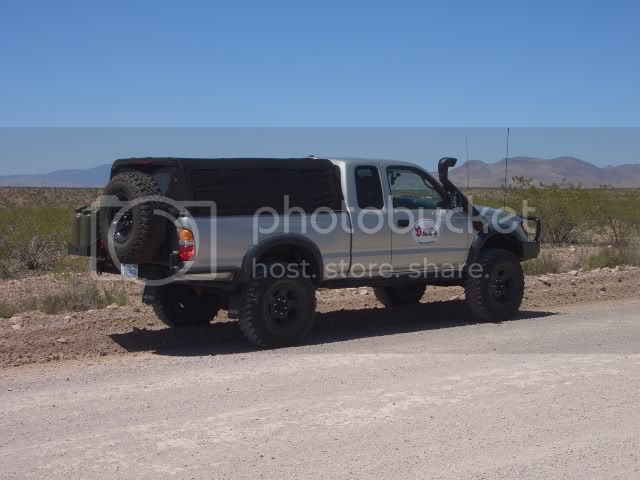 Oh, did I mention the IPOR rear tire - Jerry can carrier that got built just the week before? Great job and thanks again guys. You need one of those to hold the Trasheroo on. 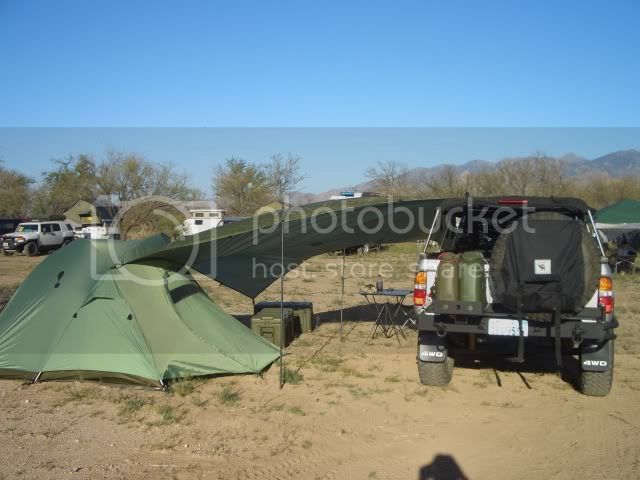 Finally made it there after pressing on against a 25-30 mph headwind that third day of 800 mile travel days. Here's what camp looked like for me. Eventually the camping area was packed with all manner of vehicles and camping systems. I have to admit it was pretty quiet at night and everyone was pretty respectful; especially after I discretely placed a few of these... 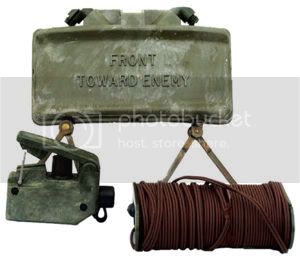 More to the story... 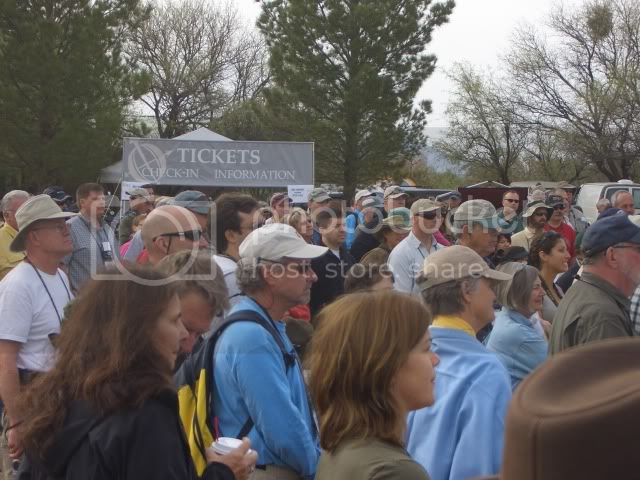 Which reminds me, did I mention the sweet deal I got on the IBS Dual Battery System? It's the ultimate one - says so on the box.

An immaculate 80 - it was trailered in by the big-honking motor-home from waaay up north in Colorado. There's your overlanding spirit... 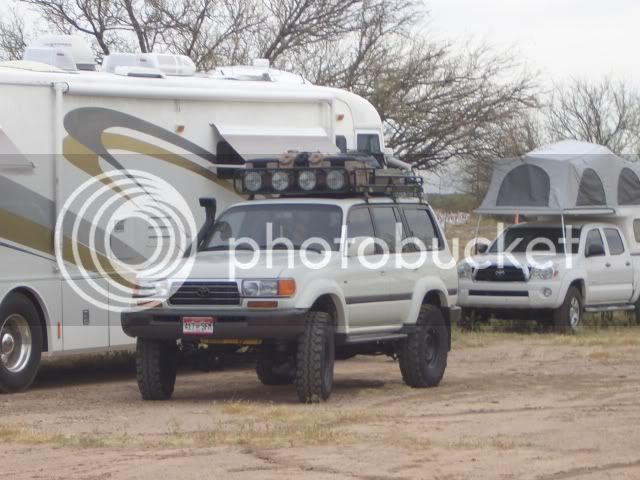 There's nothing I can say about this vehicle... seriously, the mods would delete the thread if I did. 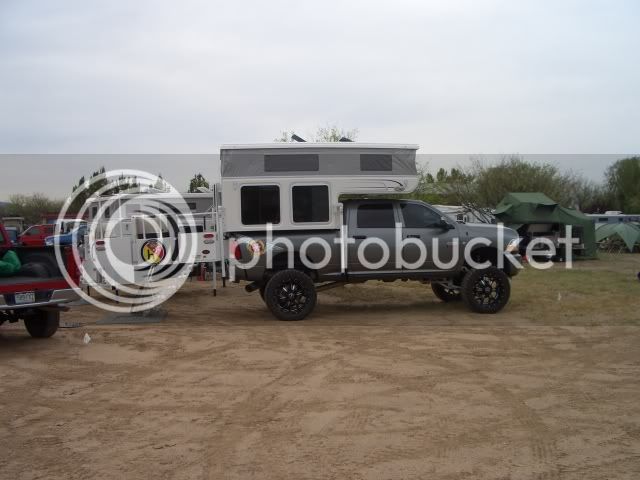 Eric-Play-a knows this guys FJC. Nice build, incredible overhead console looks stock but can actually monitor and view NASA shuttle missions. Rumor has it he will install thermal imaging next. 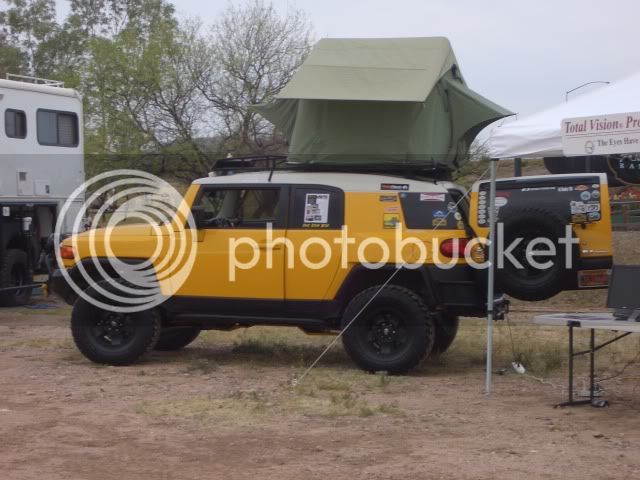 I don't care who you are this H1 is cool - the trailer it tows is flippin' huge but proportional for this size truck and is a converted HMMWV trailer. 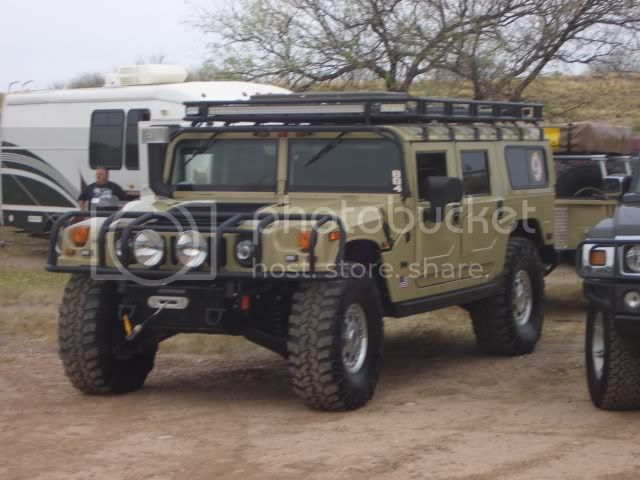 Cam - look away now! Sweet FJ60 converted to an International diesel and 5 speed. Immaculate build. I recall that Proffit's Cruisers did it; Roseann Hansen owns it. This is so expo/overland it took 3 endangered leopard hides to make the accent stripe on the body panels! 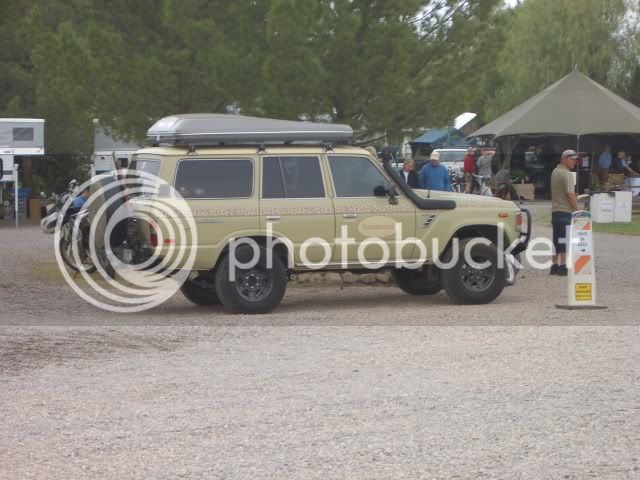 This should give Tim (1) some ideas... the ECO-Roamer (right, tread lightly) F-650-based camper. Or is it a broke-down TRANSFORMER? 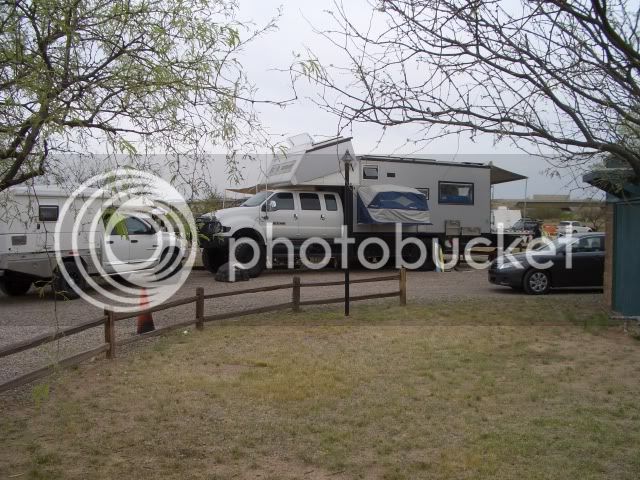 Bet GEN Schwartzkopf wishes he had one of those back during Desert Storm... granite countertops no less. Running on super-singles too. Damn good thing they put those safety cones out because that thing is near impossible to see when it eclipses the sun. Note: that dog passed out when it got dehydrated from whizzing on the tires. 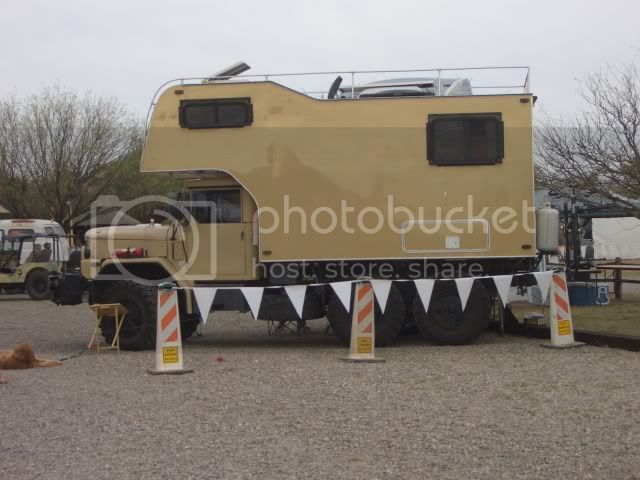 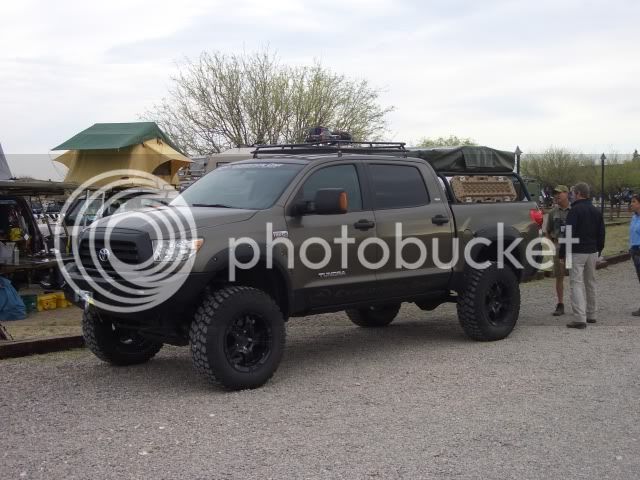 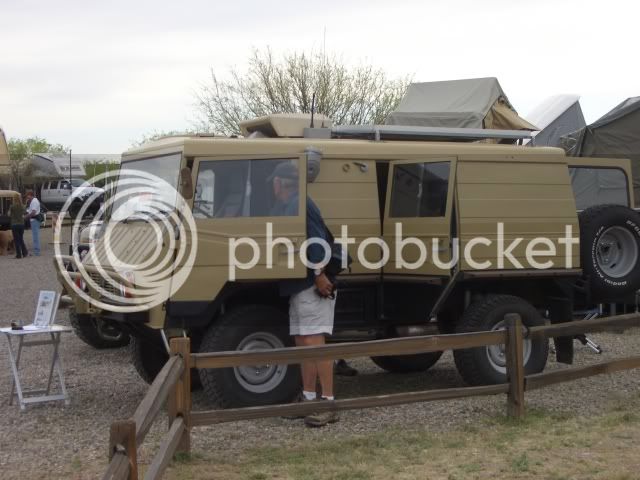 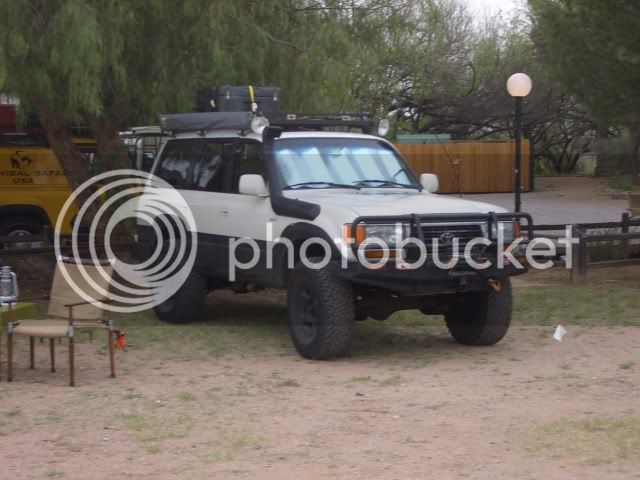 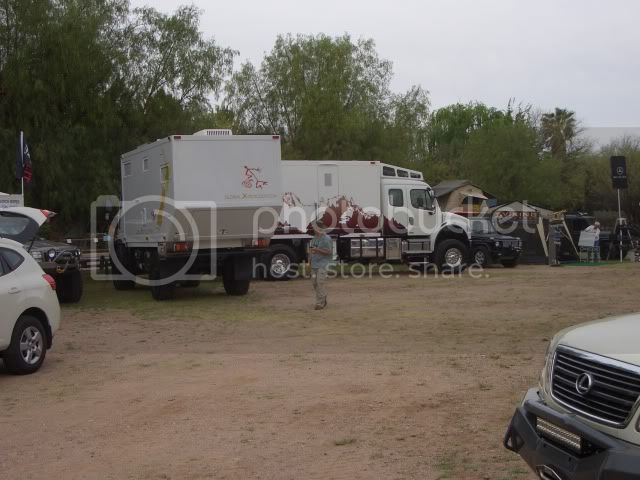 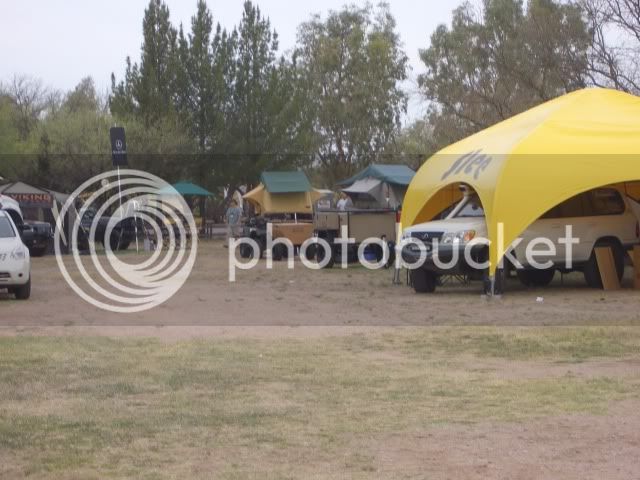 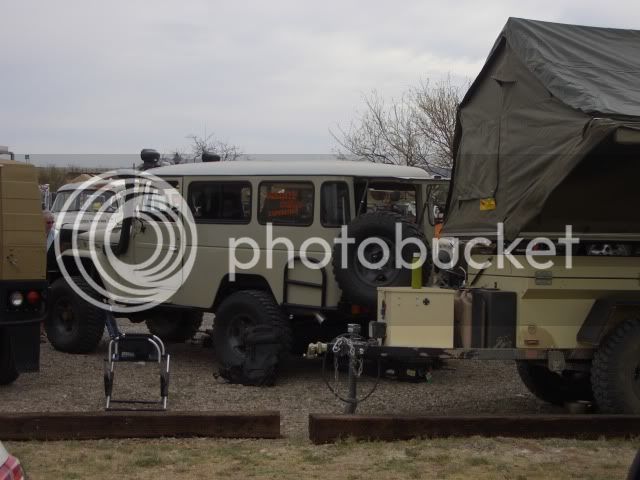 Forgot to mention... AEV is giving up on their Jeep Brute - they just don't see a market for it anymore now since the Tacoma was featured next to them. 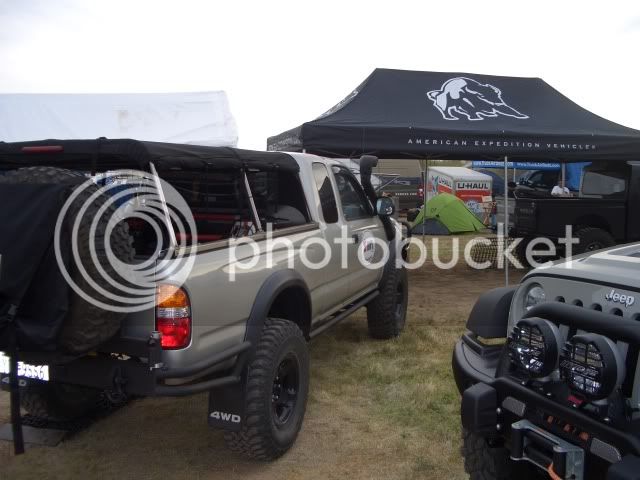 Bloo said:
What Rocky Mountain Land Cruiser specialist and his hundy got IPOR'd? Got pics but must wait to see them... ;p
Click to expand...


Oops - forgot to answer the teaser... 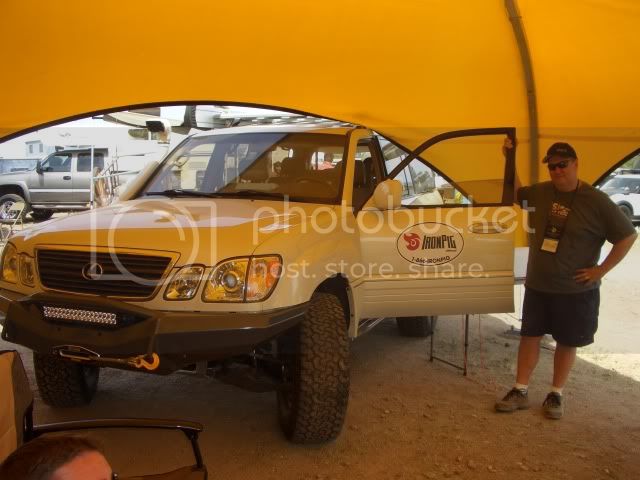 Continue to watch this forum for my interview with Christo Slee when he reveals the inspiration for his Land Cruiser products.

In fairness to Christo, who gave me some excellent route planning through Colorado, is anyone or any-FZJ40 ever safe from getting Slee'd? Nice bumper on that 100 by the way.

I'll have the rest of the pictures to present along with readings from my daily journal at my hour and a half PowerPoint slide presentation at the next BBRC meeting in Thornburg this Wednesday, 5 May. Critical planning meeeting for all those going to WindRock in just 10 days.

Awesome Tim. Thanks for sharing. Any pics from the Boneyard?

Looks like a sweet trip......kind of like the polar oppisite of what we saw at the King of the Hammers race..........
Norm
Bay to Blue Ridge Cruisers