So just got done picking up an M416. It's a 1966, and was in Forest Service use up until '06. I bought it from the guy who bought it from the FS at auction. In pretty good shape, no rust (Pacific NW, so no salt), fairly new tires. A few holes in the bed where a welder was bolted down. 2" ball, with a lockable box on the tongue.

Paid $650 for it, the guy took good care of it, so a pretty good deal. This will end up as a camping/utility trailer.

I've got about $300 to spend on it before summer. The springs/axle seem to be in pretty good shape, and it sits level w/my H3, so no need for any work there. Any thoughts on what I should do to it? I can weld/fab pretty good, so I'm thinking tailgate + lid + lid rack. What else???? 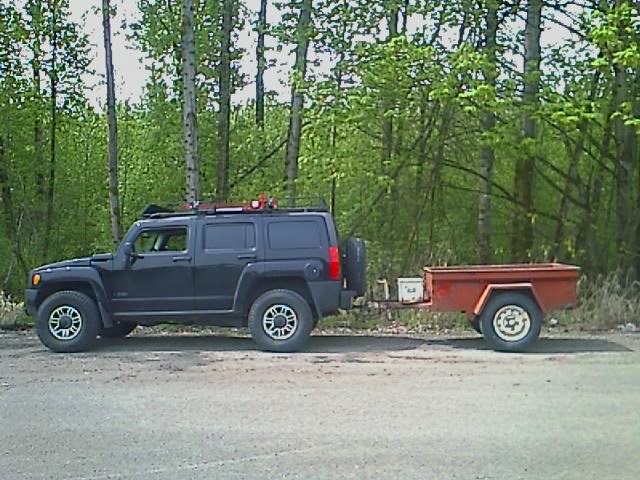 Nice find! I would say if you can weld all the things you mentioned are great. Just depends on what you need. I just bought an M101 and am having a lid, rack, jerry can & propane tank holders,etc put on it. Checkout M101CDN : Canadian M101, 1/4 Ton Trailer for some good info. Good luck with the trailer...sorry about the H3!


Hey I expect a full razzing for posting a pic of my H3 on mud...it's nothing compared to having a buddy's H3 getting winched off a rock in Big Bear a couple years ago by a really nice (i think) 40 Series... But Mud's one of my daily rituals and you should all appreciate that I prefer to lurk here instead of spending that time on the few Hummer forums out there

Put the Lunette Ring back on it and do a spring over on it, then paint it, THEN next, get a TOYOTA ...

OH and welcome to MUD ..

Lurkers are welcome, you will convert, just a matter of time...


Member of TuT's Z.E.D.U = Zombie Eradication and Disposal Unit​
B

A springover will add six inches to the ride height, BUT, the trailer hitch is going to stay at its original position on your setup. So the trailer will sit at a pronounced rake. If you want to see how this looks, stack up 6" of wood blocks under the tires with it hitched up, and you'll get a good idea of the angle. You'd have to install an upswept hitch on your vehicle to get the ride height even again, and that might interfere with opening the rear door. If you need less than 6" of ride height, I'd put 2"x2" or maybe 2"x3" tubing between the spring hangers and the frame.

As for a lunette assembly, that's going to be expensive. Used ones ain't cheap, and reproductions are out of sight. It's bad enough using these parts for repair, but to make up one from scratch, whew. Unless you're getting into situations with a lot of vehicle to trailer articulation, the ball will be OK.

It's hard to tell in your pic, but if that's 2" channel the 2" socket is bolted to, you can get a lunette ring from Northern Tool that plugs into 2" receiver tubing. It won't spin, though. But it does allow more articulation than a 2" ball will.
Today's Zombie Apocalypse Threat Level is MODERATE.

I ain't happy till you ain't happy.
You must log in or register to reply here.