It's starting to look a lot like christmas... (1 Viewer)

Yeah, Xmas is over, but. It snowed all day today. It just kept up all day long.
I finished up work right down the street from home at 6 PM. When I walked out, there was 3" of snow on my truck. I had just driven it an hour before. 15 minutes after I parked at home, my tire tracks were gone from the driveway. They were covered in snow! Between then and 8 PM, I swept the snow off of the windows of my truck and the school van several times. In all, I swept off 6" of snow. It was futile, they are both still covered.
In between, I saw real blizzard conditions, with snow blowing sideways and falling heavily. We have over 8" of snow and it is still falling, sideways. The metal-sided hut next door is completely covered in ice.
At 7PM I couldn't see the house across the street, except for the porch light. The falling snow was that thick. The wind was hurling snow off of roofs and throwing it around so that visibility was near nil.
Weather records report that Prescott Valley has not seen these conditions in 30 years. Yet here they are. And here we are!
Blizzards and ice storms at 5100 feet altitude in Arizona? What is the world coming to?

Back in the late 80's the Valley had some real storms. I remember Scottsdale Road and McClintock Drive, {Hayden Road) being totally inundated. They were rivers leading to the Salt river. Each of those roads would run a foot deep in water, yet we still drove them.

I got off on those storms as I do these northern ones. There is nobody who can make me say WOW like Ma nature.
It is just awesome to see huge clouds move in and change all of the plans of man and machine!

ya but are we still in a drought

Update;
This morning I woke to a very cold and quiet world. The kind of quiet that comes from under a sound-damping layer of snow. We had 6 inches on everything. That is a lot for PV.
The quiet lasted until my wife realized that our water supply was frozen. Then things got less quiet! I used supplies of water to fill toilet tanks and provide drinking water. Personally, I added to the long list of stories about yellow snow. By noon, the pipe thawed and water was restored.
The streets were skating rinks. This is rare here, and we only have one old snowplow. My LC was the only means of transport because we had loaned out Jill's Tercel Monday. But by 9, we had brought it home. Her car is the snowmobile of the day. It is low, long, with skinny tires and 4WD.
My LC with a lift and fat tires tested the anti-locks several times before 10 AM. I even broke traction a few times. That little Tercel can drive across a wet skating rink as well as a dry parking lot! It just doesn't care! It is a great little car!
I thought I'd get smart with the LC once. The pile of snow on the hood was getting in the way of my vision. It was melting and shifting around. Big chunks would blow off and hit the windshield. So I thought that if I hit the brakes hard, I could make it slide off. Wrong!
I hit the brakes on a side street. The anti-locks engaged. The snow on the hood was not moving! Instead, all 6" of the snow and ice on the roof slid down over the windshield! My visibility was reduced to the dash area. A guy sitting on his patio smoking got a good laugh! I had to clear the windshield, and the snow was still on the hood. Smooth move dude! 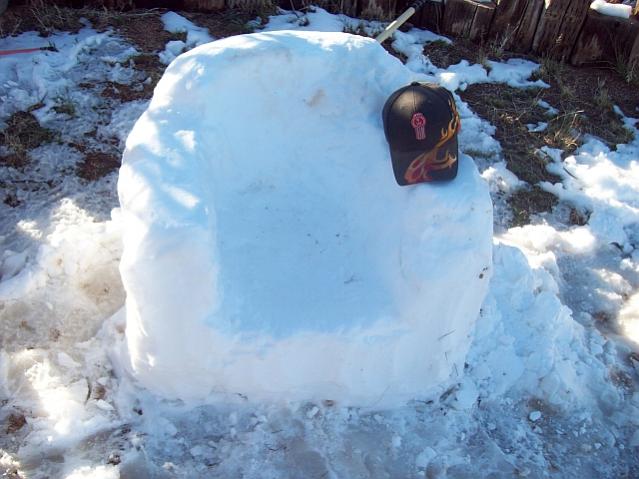 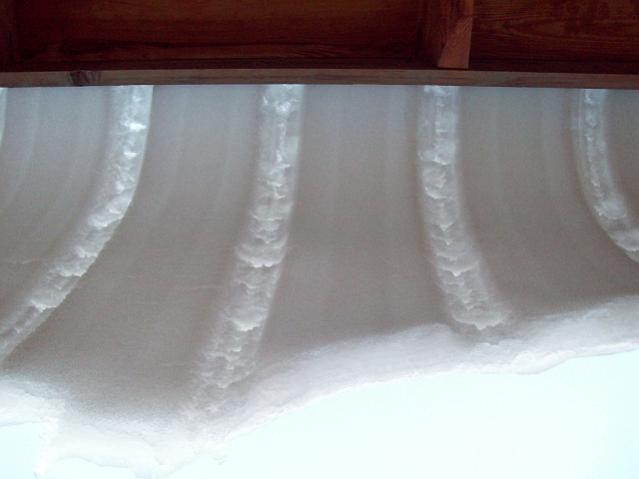 whats that 2nd picture of? And the 1st one..you made a chair of snow?

azrider said:
whats that 2nd picture of? And the 1st one..you made a chair of snow?
Click to expand...

where do your snowmen sit and have a beer?

The chair was the snowman, before he was tackled by my son. 2nd pic is snow rolling off the metal roof.

Last time I put beer on snow, it just looked like yellow snow. I cut out the middleman. That's no fun! Snowmen don't ever sit anyway. Just ask Frosty!
We may get hit again tonight. The wind shifted to the north. Clouds are moving in over a clear sky. The stars are dropping out of sight, and the temps are going down. We'll see.

Last time I went outside it was about 22 degrees. That was just a minute ago. We don't have a problem with that. It is different having four seasons, instead of three. For 35 years, I couldn't handle temps below 40 degrees. Now it is normal. Our low temp last winter was 11 degrees. I was outside at the time. I was painting the garage. No big deal! The paint just freeze-dried. When the sun hit it in the morning, it thawed and dried up. No problem!
We still have bits of snow hanging around from the storm a week ago. North slopes in town are still covered. The hills are still white. Downtown is still in a white gown. It's beautiful! What a beautiful place to live!! I love Prescott! I live in heaven, and I love it! It is worth everything that I gave up in the city. I have never looked back, not even once.
All of the conveniences that I gave up from city life are made up easily. Every morning I wake up and realize that I live in one of the most beautiful places in the world! I am surrounded by high mountains that are snow-covered much of the year. When they are not, they are home to ferns, white pines and other high-altitude trees. The high mountains surround my hut. I live in the perfect location for wheeling and outdoor living.
My hut is really simple. It will never make me rich. But it is located in the place where I have always desired to live. I love Prescott and everything that it is as a town. I love this place! It's my home!
Last edited: Feb 22, 2009

Brian, it is beautiful up there for sure. I am a native of Phx, but would only go up about once a year to the Prescott area. Although over the last few years I have spent quite a bit of time visiting a friend who moved up to Dewey a few years ago with his family ( He moved to Idaho last year). I can appreciate your love of the area.

I was up with Dad yesterday investigating a small indian ruin by Sunflower (I noticed the general store was replaced a year or so? ago with a big TOPLESS sign) in the 80 and noticed both Four Peaks and Mount Ord had snow on them! I am sure it will be melted off by Monday ~ still a nice sight.

p.s. I wonder what the pole dancer in Sunflower looks like? She probably is also the bartender/server/bouncer?! Hmmmm....

Well, Sunflower is on the other side of NAZ from us, but I concur. I often wonder why I didn't get it sooner. I lived in a clean, surburban stucco neighborhood in Mesa, yet some dealers were using our private park as a drug-dealing location. There were gunshots. I once thought of that as a problem that we could deal with? Little kids were stolen from the streets. I have a young daughter, and I had seen enough. I was simply done with it!
I took out all the equity in my home and paid cash for a simple hut in a real neighborhood in Prescott Valley. A place where my daughter can run free without being abducted. Where the Ice Cream man is selling ice cream, not heroin. A place where the young families live next to old men who park the Rolls Royce in front of a double-wide to escape the rat race. A small town...
I sold my surburban home at the top of the market to an idiot who spent another $100k on it. His loss. Now I get to live in this beautiful grass-covered valley surrounded by snow-covered mountains, in a simple home that I got for free! My wife has her dream job, and I get to do whatever I want for a living. I have built a rather solid business in the area, with a lot of quality contacts. RE agents and contractors call me for advice. A lot of people think that I know what I am doing, and ask me for my opinion. I don't really know why! But they trust me, and I seem to come through for them. They keep calling back. I might be doing something right. I'll keep doing it!
You must log in or register to reply here.

Looking to hit a Phoenix area trail on Saturday (7/25) morning. Anyone going out?