I'm afriad I'm in need of and axle rebuild. (1 Viewer)

Awhile back one of my hubs went bad.....yadayadayada I coverd that in another thread. I replaced them with selectros, which Mace said are far inferior to OEM. What I did not mention was that soon after a little grease was leaking out of the outermost seal. I had it to my mechanic for something else but he took a look at what the problem might be. He just said that the grease that was in the birf's was too light, had turned to soup, and had to come out somewhere. I never did quite buy that, and after searching around Mud, leaking anywhere does not sound good. They no longer leak, don't make any noise or feel like something is wrong. Am I due for a rebuild (260,000 miles, but if it ain't broke don't fix it) or can a leak like that actually happen? I did't have a torque wrench when I did the job, but I got the bolts good and tight.

If your grease in the birfs was too light then more likely than not the inner seals on the axle shaft are dead..

Costs about $75-100 in parts (they sell complete kits) and depending on how good you are at mechanics figure a day apiece to rebuild the knuckles.

Course, while you are at it it might be a good idea to rebuild the brakes if they need it. So $19 for pads and $20 a piece for rotors (at your local pepboys)

Torque wrench is not needed. But a big socket is.

Ready to get your hands dirty??

So, your hubs aren't leaking anymore. Are the knuckles leaking? Check your front differential fluid level. If it's real low, that's probably a good indication that your axle seals are bad. FWIW, lots of cruisers are driven in this condition for quite awhile before getting repaired.
F

89GASHOG said:
FWIW, lots of cruisers are driven in this condition for quite awhile before getting repaired.
Click to expand...

How far/long can you go before causing permanent damage?

Depends on how badly they leak and how dry you let the axle get..

FJTOYMAN said:
How far/long can you go before causing permanent damage?
Click to expand...

Not something you want to find out. Unless you just want to pay a lot more down the road.If is getting bad and leaking,then watch the level and check the grease in the birfs by removing a bolt on the top of the knuckles.


Along with a rebuild kit & brakes I would also add wheel bearings. Some kits come with them but most don't.

Also if this is your first time to do it then it is a weekend project if not more. I would say plan on 2 weekends and the week in between so you can do it right.

Well, thanks guys. That's about what I expected to hear. I'll check the fluid levels and do a little more digging around before I tear it all apart. Apparently there are some options for the rebuild kits; which one is the most complete? The brakes do need some work too. Sounds like I'm due for some quality time with my cruiser. And I get to buy some new tools

NocalFJ60 said:
...check the grease in the birfs by removing a bolt on the top of the knuckles.
Click to expand...

There is a square head pipe plug on the knuckle, towards the top....that is what you want to take out and check for grease....NOT a knuckle nut and stud....


If you have a thin grease/gear oil mix leaking out, as has been stated already, you pay now, or pay more later....

Found rebuild kits on the Marlin Crawler website, and some tools too. While I am at it I want to put the Aisin hubs back on, one of which needs to be rebuilt. Is this all I need to do it ? Doesn't seem like enough, but I don't know much about it. 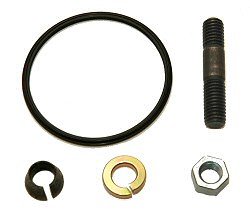 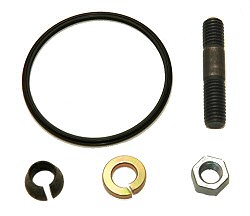 What is wrong with your Aisin hub? It could be just a bent pawl that is causing your problems with it.... I have been able to bend mine back into shape to get my hub working again.
R

Not sure. I just know that it won't turn.

When my dial was siezed up, it was a bent pawl. I am not sure how it happened, but my dial was stuck in the "Free" position, but the hub was actually locked. You should be able to pop both of them open and determine if the non working one is bent. The article linked below will tell you how to put them back together. It also has a couple of pictures that you can click on that will give you a close up view of what the pawl should look like and how to reassemble the hub. It will take some figuring out by trial and error the first time you have it apart, but once you figure out the trick, it is simple.

Great link. Thanks. Wish I had known of Mud a year ago!

good luck with it. I know I am going to have to tear into my axle before too long. I just don't have the space right now.... if my house would ever sell....
You must log in or register to reply here.