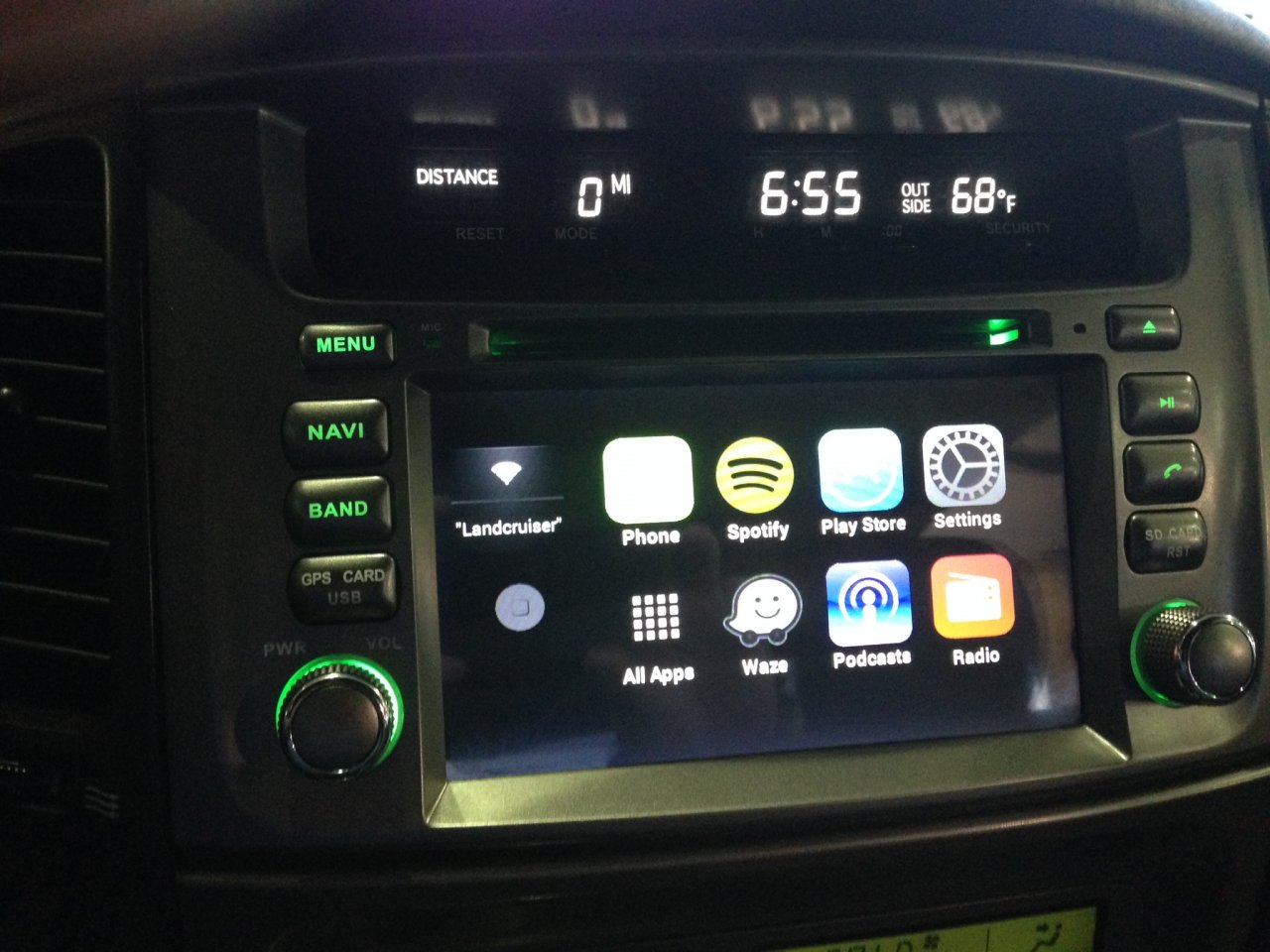 Its a rooted android hu with a custom launcher skin.
Also put in Delphi Connect so I always have wifi.
No need to plug in a phone.
Waze and Spotify were the main apps I wanted.
Steering wheel controls work and backup camera too.
Started with a non-nav system to begin with, but this is about my third iteration. Not as easy as I thought it would be.

Very clean - if I didn't have a nav system I'd be all over this. Did something similar (carputer via touchscreen and Mac-Mini) in my previous truck...
M

crimsonaudio said:
Very clean - if I didn't have a nav system I'd be all over this. Did something similar (carputer via touchscreen and Mac-Mini) in my previous truck...
Click to expand...

Thanks. Amazing how fast this stuff is getting better and easier.
R

mtnracer said:
That's amazing. Did your 2007 have the factory NAV?
Click to expand...

No, waited for one with no factory nav.
M

That makes a lot more sense now. LCs without NAV are VERY hard to find. Your project would be almost impossible with a NAV equipped Cruiser.

more details about the HU?

Which head unit? Thanks for the heads up on Delphi connect. That is sweet.
R

gahi said:
more details about the HU?
Click to expand...

Its from china. Search alibaba lsqstar android land cruiser.
I got mine with the best processor available a dual core A9 and 8 gb internal storage. Takes two micro sd cards up to 32gb as well.
It was advertised as 4.1 but came in with android 4.4.2 installed. The specs go up every few months. Get the best available at the time.
It claimed to be pre wired for toyota, but mine was not. Fortunately there is a wiring diagram on the unit and the leads were still marked.
I had a pro hook up a metra axxes swc1 steering wheel control on a prior unit, this one hooked up to wire from the prior install.
There is an app that reads input voltage from steering wheel and lets you assign head unit functions. I have track up, track down, volume, and mode.
The hard button navigation on the head unit can be assigned any nav app. The phone icon pulls up a bluetooth dialer and streaming app from factory. Don't think this one can be reassigned.
Capacitive touch screen is nice. Not quite iPad good, but cheap android tablet good, Pioneer good, way better than resistive.
Factory amp was terribly noisy with this and prior head unit. No one could figure it out so I put in a small jl audio 5 way to factory speakers. Noise gone.
The hu works great for spotify and waze. The built in mic for bluetooth is not great, but passable.
There are front rear and sub pre outs. Sound quality is ok. My guess is pioneer and alpine are better, but its not noticeably objectionable with mp3's even high quality ones. As you moved into competition level systems this one probably wouldn't hold up.
Reverse cam works good.
Startup time is slow. More than 45 seconds, but reverse cam works right away. I think a better rom and startup manager might help that, but it takes a while for the delphi wifi to get signal anyway.
FM radio, and dvd player are factory apps not through android with ok interfaces and can't be changed as far as I know.
For me I always wanted a clean interface without nag screens, and constantly updated nav, so it fits the bill.
Color is a 95% match. Could be fading on my existing console. Its not objectionable. Size and clips, etc are a perfect fit.
I like having the volume knob, but it feels a little cheap compared to pioneer or alpine.
I have no idea how warranty service would work. Most sellers on alibaba list them only in lots of 2 or 4 but if you contact them they will quote you for one. Just under $600 shipped.

Prior install was a double din universal running android 2.3.7 from a seller called pumpkin on ebay. It was awful. Got a faceplate from the UK, but the HU was a bit bigger than standard double din, and cut it up myself to get it in, and it looked not factory at all. Interface was slow and buggy. Never posted because it was awful. At least it was wired up for this one. I did this install myself, copying the wires from the prior install.

I mean this in the nicest way when I say "you suck".
R

Looks good.
45 sec startup ?? How about keeping it on all the time? Isn't there some kind of sleep mode, or hibernation? Or just swich off the screen backlight?
It looks like the face plate comes with the unit, and it fits perfectly?
R

Perfect fit made for the 100 series, head unit and faceplate all one piece.

Suggested wiring shuts down with vehicle. There is supposedly a delayed turn off for up to 1 hr but I haven't found it. I would worry about battery drain leaving it on. But its a good idea about standby. Maybe the next time I have it out.

Do you have some zoomed out / daylight pics?
R 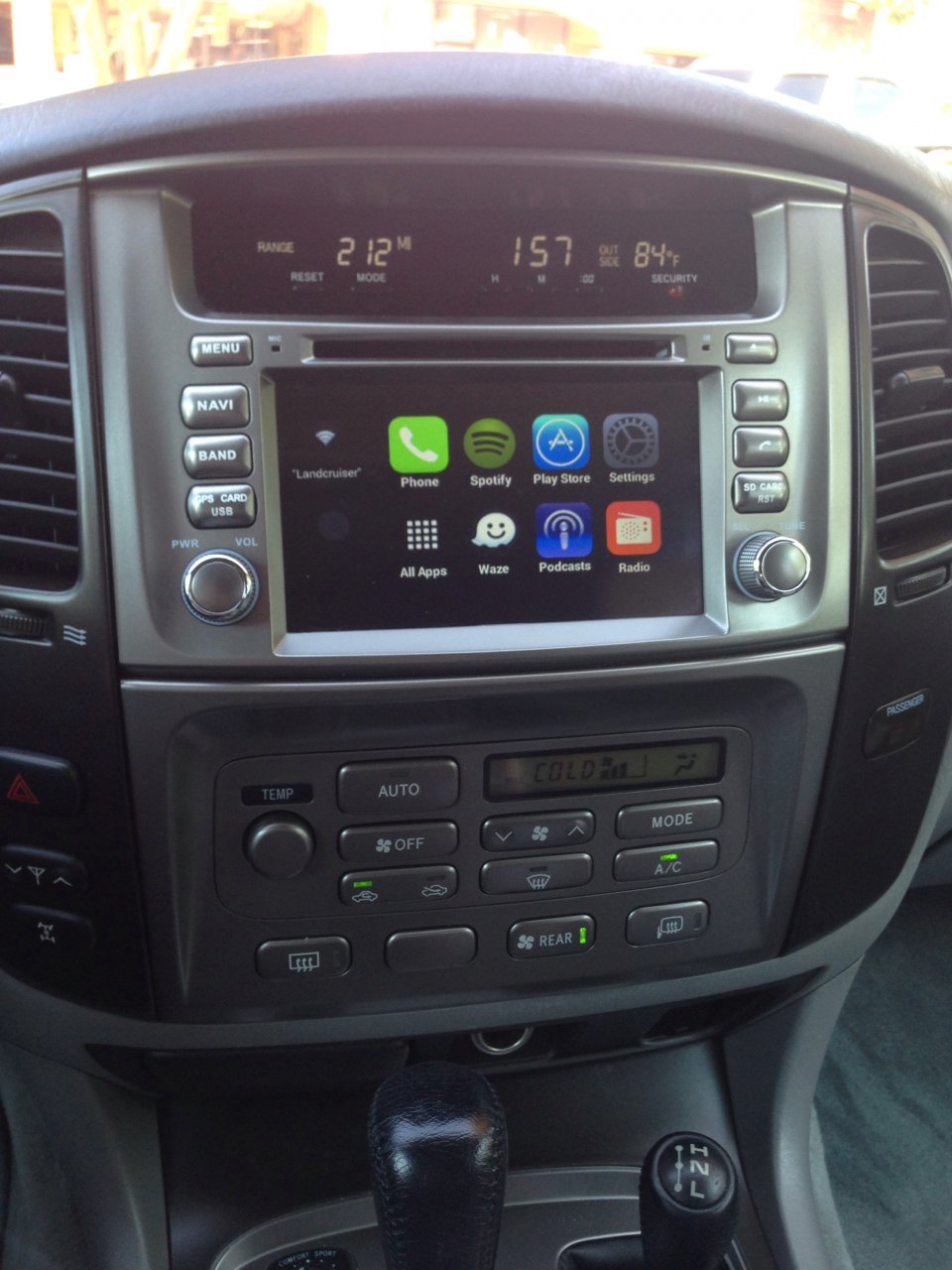 I know tech guys love your tech. Good for you. But if I ever had a Hundy without a Nav system I would keep it stock. To me it's like finding a unicorn and cutting off the horn

I don't feel changing out the stereo in a non-Navi 100 would reduce it's value any. I'll take this unicorn with or w/o the horn please! 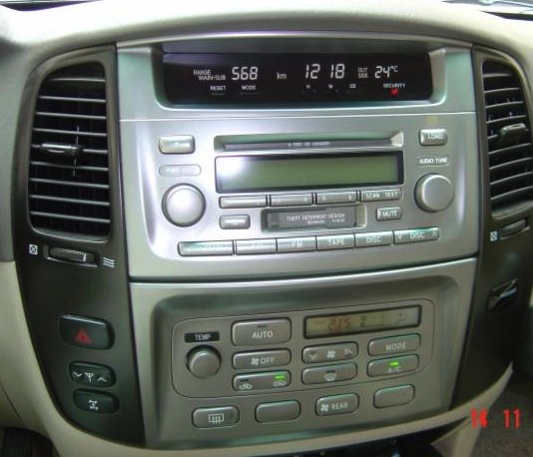 The oem head unit and amp are carefully packed away in my closet. The few harness cuts are repairable.
G

I'm going to ask this, yet I am confident that I already know the answer: has anyone ever swapped out the factory nav unit in a 100 series, successfully? I would absolutely love to update my unit. Like most of us, my hesitation comes from the unit controlling the air, etc.
R

Pretty sure there's an active member here who has a site/project working on the conversion. I don't think its done yet, but there was a lot of interest.
You must log in or register to reply here.