I'm trying to replace the hoses on the water pump on my '84 FJ 60. I also need to replace the fan clutch, as the fan only runs when the engine is cold (it stops as soon as the engine warms up, which seems opposite of what it should be doing).

In order to get to the water pump hoses and clamps (which are fused to everything including themselves), I am having to remove pretty much everything, including the skin on all of my knuckles.

I'd like to remove the shroud from the radiator so that I can then unbolt the fan and replace the clutch, but the forward end of the fan sticks ½ inch forward of the back edge of the shroud, so there's not enough clearance from the radiator to slide the shroud up and out. The fan blocks removal of the shroud. What's the trick? Do I need to unbolt the fan first (by wrenching around between the blades and removing the bolts)? Should I try to unbolt the pulley from the water pump first with the fan attached?

Thanks for your help.

I don't know which hoses you're replacing, but...the suction side of the water pump connects to a pipe manifold which also connects to the bottom of the radiator and the oil cooler water return line (I think). Anyway, that pipe manifold is actually bolted to a support down by the A/C compressor. It's a real pain to replace those hoses, but it's even harder if you don't unbolt the pipe manifold.

I have this craftsman tool--its for removing cotter pins--but I use the hook to break the seal between the hose and the fitting. I push it underneath the hose and push it around the perimeter of the fitting. 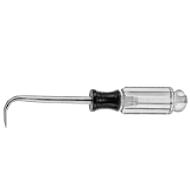 some people, including myself, have cut the fan shround in half. i made a nice clean cut and can easily remove the top half. a real knuckle saver.
84 fj60, 1HZ diesel conversion, 5spd, 33x10.5 Toyo MT, 8274 winch, 2" heavy Ironman suspension, Fridge/slides/drawers, Maggiolina RTT, Arkpak, Custom heavy duty racks. Open diffs for now.
A

I do not know how of a different between a fj60 and 62 in the area, but I just replaced my water pump on a FJ62. I did not remove the fan/clutch or fan shroud to do it.

A week later the fan clutch was gone.
I removed the fan + clutch & fan shroud together. I tore up my left wrist (loosening/tightening 4 fan nuts) as I had run out of latex gloves doing passenger side knuckle rebuild one day prior. I love latex. Double up the gloves and you'll save skin. Also, buy'em by the hundreds.

Three hands would of helped but the shroud only hung up on filler neck but had enough flexibility to bend and free.

I took the shroud off to replace my water pump. First removed the battery and tray, the four nuts on the fan, and six bolts on the shroud. Took less than 10 minutes and gave much more room. Still, I managed to sacrifice some knuckle skin to the 2F gods.
'83 FJ 60. Stock--desmogged/headers and all mechanical rebuilt or new. AAL's all the way around, 30" BFG's, overload airbags, custom storage boxes.
C

Guys, thanks for these great tips. I'm going to unbolt the pulley from the water pump to remove the fan, and then I'm going to remove the shroud and cut it in half while I'm at it so that next time it won't be so painful. Literally. I smashed a finger so badly yesterday that I'm typing with 9 fingers. I had to cut off the old hose from the water pump to the oil cooler with a knife. It slipped. I guess I'm lucky that the hose was all I cut.

For such a seemingly big engine compartment, it amazes me how hard it is to get to stuff, particularly on the front end.

I bought a new water pump thinking that I'd need to replace it, but it looks like all that was wrong was a leaking hose off the lower end of the water pump. The leak was probably due to a loose hose clamp, which is probably due to the lack of clearance between the big hose and the little hose going to the oil cooler. I think the last guy probably got a couple turns on the clamp and then gave up.

The job has been difficult enough so far that I'm leaning towards just replacing the hoses and not messing with the pump. My conscience says go ahead and do the water pump just in case 'cause I'm already most of the way in there. My hands say "NO! Don't make me grab all those frozen bolts you can't even see!" In any case, I have to wait a few days until I have all 10 fingers back on line.

Thanks again for your great suggestions.

anyone have pictures of their fan shroud cut in half and how they clip the shroud together??

What did you use to cut that sucker in half as well??

CAVU said:
The job has been difficult enough so far that I'm leaning towards just replacing the hoses and not messing with the pump. My conscience says go ahead and do the water pump just in case 'cause I'm already most of the way in there. My hands say "NO! Don't make me grab all those frozen bolts you can't even see!" In any case, I have to wait a few days until I have all 10 fingers back on line.

Thanks again for your great suggestions.
Terry
Click to expand...


If you have it apart I vote to change out the pump. Two years ago I changed out the radiator and all the hoses on my 60. I chose not to replace the water pump because the original was tight with no wables spun smooth and the truck only had 95k miles. I've put less than 5000 miles on it since but last week the bearings on the pump went. So this weekend I replaced the pump that I bought two years ago and never used. It would have been far easier to do it then than it was now.
94 FZJ80 134k Locked, ARB Front, OME heavy, Warn 12000, TJM Rear. 285 MTRs, LED's & rear cargo light.
85 FJ60 98k, ARB front, 3"lift, 32" BFG AT

i inherited this tool from my dad. made a nice cut. then just screw it all back on and it seems to be firmly in place. no extra fastners needed.
Last edited: May 13, 2006
84 fj60, 1HZ diesel conversion, 5spd, 33x10.5 Toyo MT, 8274 winch, 2" heavy Ironman suspension, Fridge/slides/drawers, Maggiolina RTT, Arkpak, Custom heavy duty racks. Open diffs for now.
You must log in or register to reply here.

Carb cooling fan on a 62 with EFI?

Installing front door cards, simple. WTH - is there a trick to the rear door cards?