I did some research in preparation for changing my drive belts. My Chilton manual has the topic listed in the General Maintenance section, and devotes approximately 1/2 page to the subject, so I wasn't expecting it to be too difficult. Many of the posts I found made the process much more complicated than it should be. I completed the process yesterday and thought I might post the steps I went thru. This was my first time changing the belts so it took me slightly longer than it should have. I don’t claim to be an expert and the process I outline below is just my opinion. Refer to the experts for the official process. Here's what I learned:

Used OEM belts. Amazing how much thicker the OEM’s were than the belts I was removing.
Needed just a handful of tools. Includes 10, 12, and 14mm sockets. [See Pic 1] 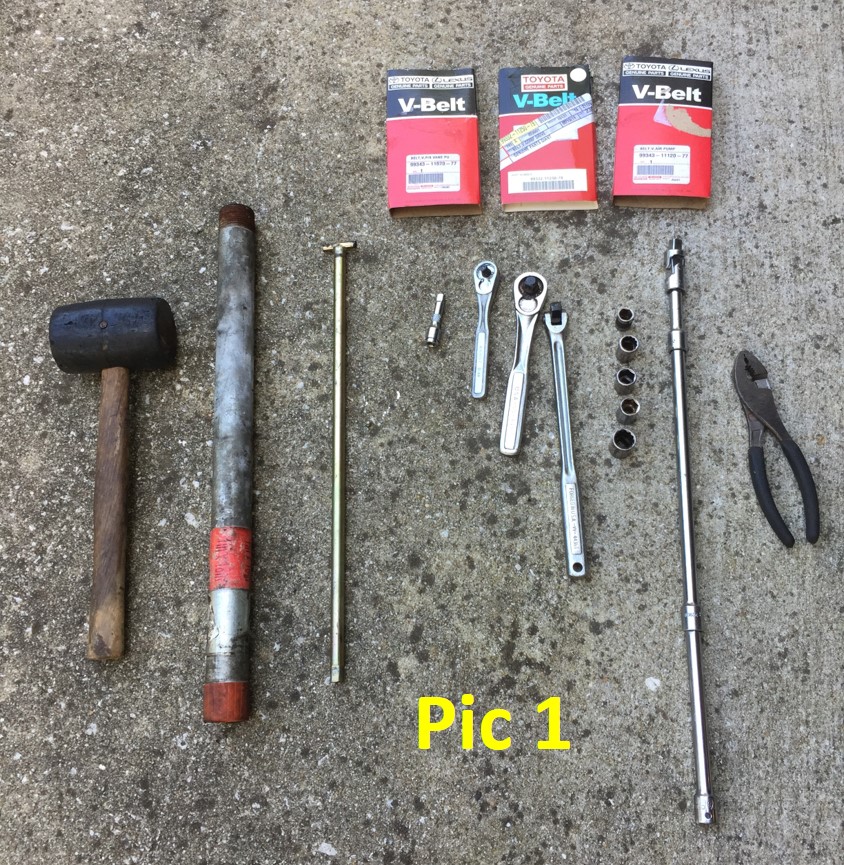 I did not need to cut/bend anything on the fan shroud to feed the belts in/out.

Made sure not to over tighten the new belts.

Remove the Vane/Alternator belt by loosening the bottom pivot bolt (needed wrench on both ends) on the alternator and loosen the top bolt located in the adjuster bracket. I did not loosen anything else. Alternator then turns in allowing the belt to slip off.

Fed the old belt past the fan. Done.

Removed the two hoses that were in my way. Not really necessary but made access easier. Hose removal took one minute.

Loosen the 12mm bolt. Bolt is located just under the air pump wheel, above the lower part of the belt (inside the belt loop). Found with fingers since I could not see it. The nut on the back is much harder to reach (or see) but the job was easier after I constructed a 24” extension with a ratchet swivel adapter and a 12mm socket attached to the swivel end [Shown in Pic 1]. Just needed to keep the nut from turning while I loosened the bolt from the front. I was very careful not to have the nut fall off the back. My truck is not de-smogged and retrieval would have been difficult.

Loosened the top bolt in the adjuster bracket to the point I could pull the adjuster mechanism off the back. That was it. Turning the pump in to get the belt off proved challenging because some hoses were basically petrified and unworkable. Careful not to break anything, I ended up putting a T bar (from my spare tire kit) with a pipe extension under the pump just enough and used the adjuster bracket as leverage to rotate the pump in to pop the belt off. [See Pic 2] Done. 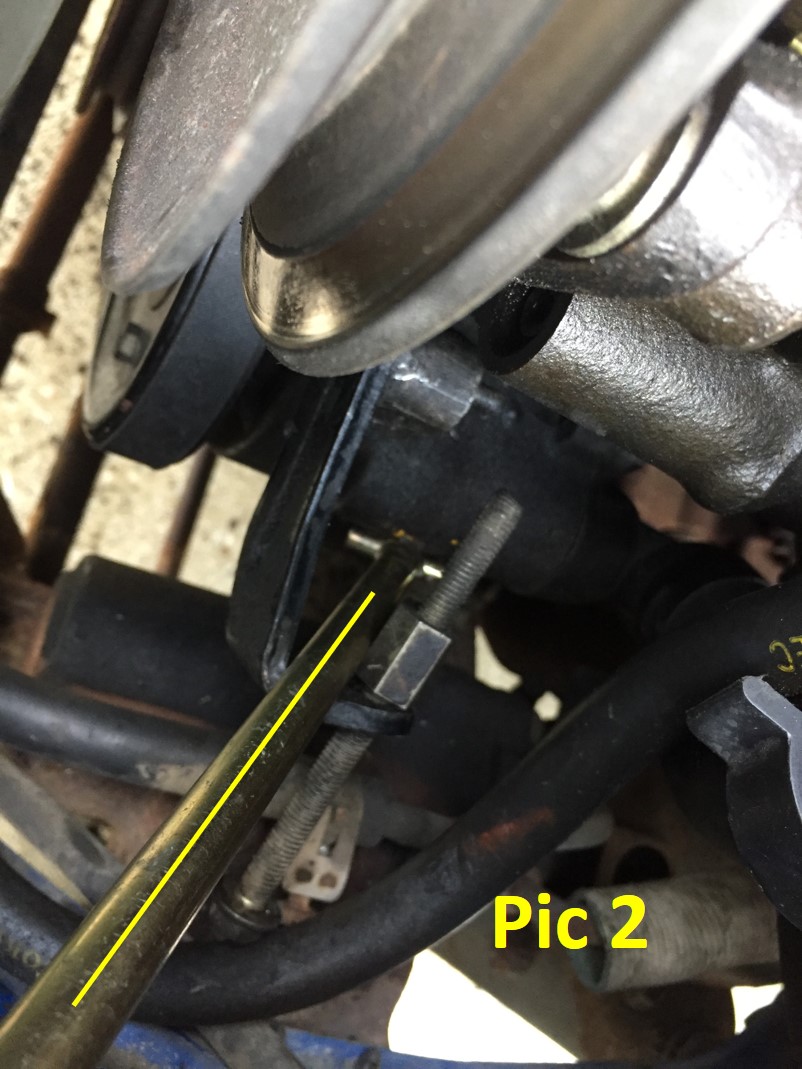 I did not have to go under the truck for anything other than retrieving a dropped tool. I was able to loosen the two bottom pivot bolts easily from above.

The third bolt located in the adjuster slide was hard to see and I ended up removing it in order to get the compressor to rotate. Easy enough. Not sure if I needed to remove the bolt since putting it back in was difficult but eventually accomplished without the ability to see to line up the hole.

I did not mess with the Tensioner wheel below.

While the belt was off, I turned the compressor wheel to check clutch.

Pulled the compressor towards me to tighten the slack on belt, and tightened the two pivot bolts.

Feed the new belt past the fan.

Looped the belt under the crankshaft wheel, over the water pump, and then from the bottom of pump wheel, turned counterclockwise while using the lever I created to turn the pump in. [Shown in Pic 2]

Put the ratchet extension on the nut located on the back of the pump and tightened the bolt from the front. The petrified hoses I mentioned earlier pushed the pump back in place taking up any slack in the new belt.

Feed the new belt past the fan.

Loop the belt under the crankshaft wheel, around the P/S Vane pump and work over the alternator wheel.

With new belt on, pulled the alternator towards me while tightening the top adjuster bolt.

Then tighten the pivot bolt. I stripped this bolt while loosening it earlier and had to remove it to rethread the bolt and nut.

Put the hoses I removed back on.

Ready to start her up and adjust/fine tune belt tension if necessary.
Last edited: Apr 10, 2020
7

Thanks for the write up. Where did you order the belts? I'm looking for the same ones.

74GreenFJ said:
Thanks for the write up. Where did you order the belts? I'm looking for the same ones.


EDIT: Found them online at Toyota.
Click to expand...


I believe i found them at ToyotaPartsDeal.
You must log in or register to reply here.

Is there any point in periodically changing power steering fluid?

Is there any point in periodically changing power steering fluid?