Just figured out our 2000 4runner has CA emissions and I'm getting the famous P420 code and O2 sensors have been changed. I've been babying it for several month with the CEL going off and on, but now it is getting bad that I'm seeing lose of power and the car is rattling.

My main question at this point that I can't find a whole lot of opinions on:

Do I absolutely need to change both the front and rear?

Loss of power can def be clogged catalytic converter. Been there and done that, had that problem myself. You can gut the cat you have to see if it's clogged...and then just run it gutted just sayin.

If you want to have a guttin' party let me know. Mine need to be removed and gutted. Allegedly...

They may catch a gutted cat on a 2000 4runner. Depends on county and the actual test station but my old job would catch that.

To the original question. You don't have to change them both at the same time if you know which on is bad. You should be able to get away with just the one.

Yeti is right, in some places they use a temperature probe to check to see if the cat is hotter like it is supposed to be.

You can do this with a laser thermometer.

To check to see if the cat is plugged, pull the O2 sensor (unscrew it to make a hole). This will free up the restriction and tell you if the cat is clogged. If clogged, the motor will regain power. If no gain in power, then a clogged cat is not the problem.

Does it have the classic problem of more and more bogging at higher RPM's?

If it were mine, I'd replace them all.

Take it to Henry's Muffler, ask for Donny (Mgr), tell him you are an ONSC guy, he will take care of you.

I replaced my 80 cats with a single Magnaflow without issues or codes...


Front cat is on order and I will do that first and see what happens.

While I'm at it I may take off rear and shake out crap / clean. May not help, but I don't mind spending the time.

At this point I will replace front and see how it goes. Funny enough CEL stayed off long enough for me to pass inspection yesterday, but over the last few weeks it has lost power quite a few times... The classic pedal to the floor with little acceleration and also pretty sure it is the cat making the rattle noise.

4runner is the wife's and our only true daily driver so I try to leave it pretty stock.

I will report back on findings / results. After this I will return to 40 seats which will be way more fun and rewarding!

Well tonight is one of those times when I'm reminded why I do my own maintenance when possible.

Shop said they replaced both O2 sensors, but when I took off cat and took a look at everything it seems pretty obvious the rear sensor is original. It is denso and doesn't march the front which does look like it has been replaced recently. Also the nuts on the rear O2 sensor are all messed up and there is no way they were removed in the last year with the condition they are in.

At this point I plan on seeing if I can get the rear o2 sensor off the cat and test it (could be tough with the condition of the nuts).

Remind me of the test procedures of an O2 if anyone catches this post.

I'm now hesitant to replace cats with how good they look internally. 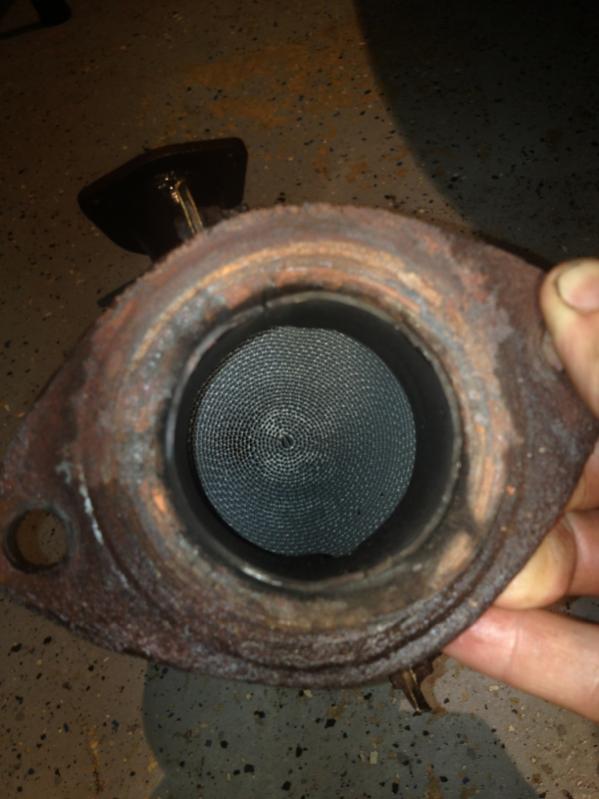 Turned it on and it drove like a Ferrari compared to how it was before. CEL never came off.

Parked it for 2 hours and CEL came back on. I haven't checked code to see if it is the same code, but I'm betting it is.

Any thought? I'm considering putting the front cat on, but when I saw how bad of shape the rear O2 sensor was I thought it was going to solve the CEL. It made it drive a ton better, but I was shocked the CEL came back on.

Without knowing what code it is throwing it's going to be tough to know what the problem is.
K

You do need to pull the code. Could be something else.

On my VW Diesel it threw the same code three times in a month. Had it fixed. Once that part was fixed, it started with another code and had to get that fixed. Turns out the problem was caused by the first part going bad which caused another to go bad.

It could very well be the same code but you need to verify before you proceed.

Could be the other O2 sensor. I usually replace them all at the same time.

Have you had the injectors check? Bad injectors will take out your cats...

So will bad O2 sensors.

Fuel Rich is death for the catalyst.

I don't think being a parts changer is a good way to fix stuff and if it aint broke don't fix it...BUT cats and o2 sensors have a life span shorter than the truck. So do injectors. I've had a few cars where the problem was a bad injector that took out the cats.

You can take them to have them tested or you can rig up a jumper on the fuel pump relay and point them all into a set of clear plastic tubs to observe the way they mist the fuel.

On my GTi with clogged cats one of the injectors dribbled fuel and shot like a squirt gun.

unplug the battery for around 30 minutes that should reset the ecu and at least make sure the code is going off. If it comes back on then at least you know.

Had it happen on my friends acura that for some reason the cel was staying on for the part we just replaced till we did that and then it never came back on and ran fine.


also for the po420 code the temp sensor on the engine can be bad causing the car to run rich.
It doesn't sound like that is the main problem though since it ran better with the new sensor. It may still be a bad cat that was caused by that bad o2 sensor.


I'd reset the ecu and then pull the code if it comes back on and then start from there.

Man this is getting annoying...

Now got P0120 which is a throttle position sensor.

Plan on putting in, cut battery and see if any codes come back.

I feel like I'm chasing the never ending CEL.

Well put throttle pos sensor (P0120) on and it is back running good. Hopefully this is the end of this saga and I can get back to 40 seats.

Thanks for the feedback... I feel better working through this stuff with feedback from others.

Sometimes you just have to step back for a bit and take a small break. Then go back at it again.
H

FWIW, old cat converters can be cleaned for less than $20.

If you have a spare dishwasher lying around
You must log in or register to reply here.