can you guess where this is.

This is not a very exciting picture but its the only evidence I have for today. Can you guess where I was?

One hint......I added the dent in the picture getting on the trail. 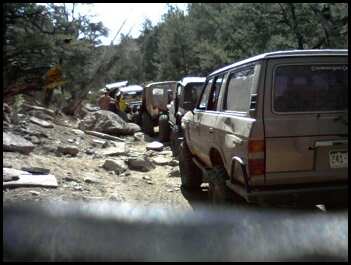 Another hint........I separated the front drive shaft on ball rock. I need a longer spline drive shaft or I need to put the front anti-wrap bar back on.
85 FJ60 - Powered, lifted, locked, geared bumped and bruised.
Chuck

it wouldn't happen to be carnage canyon.

down in Penrose...Liberty or Independece....something like that...
Rui
06 4Runner Limited 4X4

I ran Chinamans Gulch on Saturday with Ute Pass Iron Goats. The run was auctioned off at a fund raiser. We camped Friday night and made the run with three people who won the auction for Community Partnership. Some of the Ute Pass Iron Goats were planning on running Carnage on Sunday. I walked Carnage on Saturday night and thought I could make many parts of the trail but a few parts would be very very difficult. At about 1/2 way up the trail two buggies were parked. I heard another buggy coming up the trail so I waited to see how they would get past a nasty and currently muddy part called the V notch. I watched a buggy turn around and head back down the V notch. VERY IMPRESSIVE!
The group from Ute Pass Iron Goats decided they would run up to the just below the V notch and turn around so I thought I think I can make it that far. We made it to ball rock where I pulled my front drive shaft apart. We found out the a buggy was coming down the trail with a broken rear axle. The left rear wheel was chained on and would not turn. We pulled aside to let the buggy go by. That thing was single broken wheeledly changing the trail before our eyes. It was getting cloudy and looking nasty weather wise so we turned around to get out of Carnage before it started to to snow.

I can now say I ran part of Carnage! I am afraid I will have to try the whole trail one day. One day when I have time, the weather will be good and I have lots of spare parts with me. The group of buggies that were there broke three axles and a track bar from what I could gather from talking to them.
85 FJ60 - Powered, lifted, locked, geared bumped and bruised.
Chuck

Wagons on Carnage???? Lol. I would liked to have seen the new hydraulic assist steering in action. Are you loving not having to worry about breaking an axle or whether or not you can steer?

I was going to guess carnage, but I didn't really think you would have brought your wagon down it. Good for you Chuck. Way to represent the FJ60.
Mark Janzen

I wasn't worried about the front axle since it is now Longfield 30 splined but I haven't done any work on the rear axle and the buggies were breaking rear axle shafts. I think the buggies were in the make it or break it club that thinks winches are for admitting defeat.

Buggies on 42's can move big rocks and make it look easy.

The ram assist is very nice in tight trails. I need to make an adjustment to the ram because I can turn fine to the right but the ram limits out too soon turning left. Traction was good on the trail but with only little 37" tires the diff gets hung up a lot.

The FJ60 looked a little like a school bus on this trail.


My memory card was full and the camera batteries were dead from the Chinaman's run on Saturday. I handed my cell phone to someone to take a picture of me getting into the entrance of Carnage with the sign in the picture but when I went to post the picture it wasn't on the camera so I guess it didn't get saved.
85 FJ60 - Powered, lifted, locked, geared bumped and bruised.
Chuck
A

That v-notch is one tough looking trail, I think i'd be alright if it werent for that crazy azz exit...
Dunno how down I am to winch out!!!

anthonyz said:
That v-notch is one tough looking trail, I think i'd be alright if it werent for that crazy azz exit...
Dunno how down I am to winch out!!!
Click to expand...