97 4runner wires and Mice. what do these wires go to

Well Just started up the 4runner from sitting a few weeks, Thought it was strange that the battery was totally dead. nothing, not even the dome light.

Charged the battery for a few hours and it started up. ABS light is now on, has never been on ever.

Look under the hood and see some shredded paper towel on the drivers side near the battery.

Continue looking to the passengers side and find the wiring loom chewed up a bit. Look closer and its about 4 wires in total which are now "cut"

I know the wiper motor wires were messed up. Blue black, Yellow Green and Blue white are cut. Wipers work but will not "park" I will fix this asap.

My question is in the larger part of the loom that comes through the passenger side fire wall up high near the ABS hard line box.

What appears to be solid red and solid white are clipped. Anyone know what these go too? and would this affect the ABS light.

I checked the ABS fuse and I think its good.

Anything Else I am missing?

I checked the Haynes manual real quick and didnt find out where these two wires (Red and white) go. If its like the FJ 40 I have, Solid white is usually power?

Thanks Attached photo prior to placing trap with cheese Bastards. 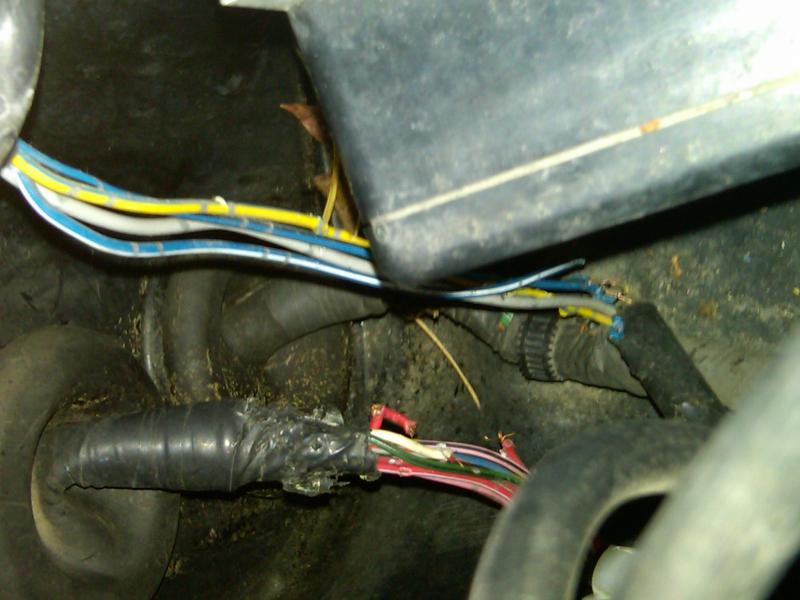 There is a link to the factory service manual for an 02 4runner, in my sigline.

Now the ABS systems are different between a 97 and an 02, but if it's not abs related the wiring diagram might help you out.

I think you should just hook them back together and see if the abs light goes out.

Thats the plan. I have to believe the light came on because of it. Its never been on before ever, and I have owned this 4runner for 9 years and 50K miles.

I downloaded the 96FSM and looked through some of the 1600 pages, but did not find anything difiniative.

My other stumper is the battery being completely dead. Its a few year old Die Hard. It was charged up all winter, and I charged it again probably a month ago. All systems go. (this is a 5th car for us) When I put the charger on it, I was expecting to find a dome light left on, or something like that, but nothing. Its still holding a charge but will see.

I will try to report back once the wires are soldered back together.
'97 4Runner bone stock.

Kinda strange that the battery would die from the ABS wires being chewed on .

Anyways, the info in this guide may help you.

The dead battery has me stumped a bit, I will see about messing with it tomorrow. Just too many irons in the fire right now.

I might get some free time tomorrow night to get my solder iron awn.
'97 4Runner bone stock.

zetasig said:
The dead battery has me stumped a bit, I will see about messing with it tomorrow. Just too many irons in the fire right now.

I might get some free time tomorrow night to get my solder iron awn.
Click to expand...


Were a power and ground (2 of the chewed on wires) shorting out and discharging the battery maybe?
3rd Gen 4Runner FAQ - Work in Progress
01' 4Runner SR5 5VZFE-A340F

update from tonight. All is well again. Soldered 4 wires back together. shrink tubed them and wrapped everything up with electrical tape.

Wipers park as they should, and ABS light went off. While I was screwing around I cleaned the MAF sensor and intake....

The battery is holding a charge with no issues. So I am still stumped.

Found a nail in one tire and plugged it too. All in all a decent night.
'97 4Runner bone stock.
You must log in or register to reply here.