I bought this as a second land cruiser in the driveway, this one for my wife, she wanted one with no rust and a clean interior. She no longer wants it and I already have a 60 so we are selling hers.

The good stuff: 4x4 works great, no tears in fabric of interior (two vinyl tears only but no tears in hard to replace fabric), no cracks in dash either, stock condition and unmodified cruiser. Recent maintenance: plugs, distributor cap, plug wires, air filter, fuel filter, vacuum lines replaced, 31" BFG All Terrain tires with LESS THAN 5000 miles of use. Engine overhaul by local Toyota dealership in January 2000 at 193,000 miles.

To be mentioned: A/C compressor kicks on but is not blowing cold (FIXED! 7.19.08 A/C is COLD now). Has minor exhaust leak and has lower than expected compression. 100 - 90 - 70 - 70 - 90 - 100 for the cylinders. Recent valve adjustment improved center numbers but I believe this truck will still need a head gasket installed. I will split the part with buyer, current available at $160.00 for original equipment part from Toyota. Also, Drivers Front fender is dented, I've included a picture of that here.

Over all for a 24 year old truck, this one is extremely clean, drives well, and is rust free!

I would love to do the work on this one to get it in top shape and try and hit a home run selling it, but I'm spending my time else where and as such set the price based on the lack of rust, clean interior and solid drivable condition.

Please send questions or requests for addtional pictures to texasfj at g mail dot com, or PM me. 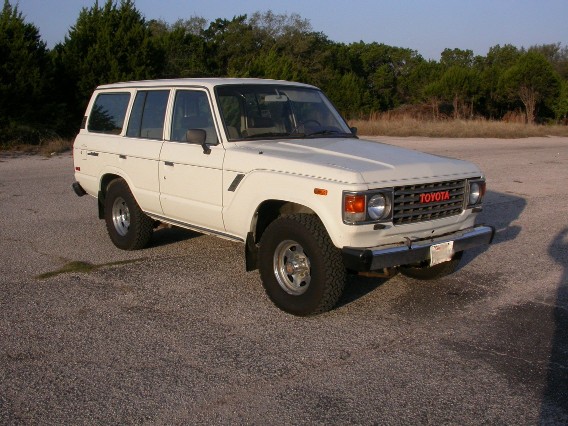 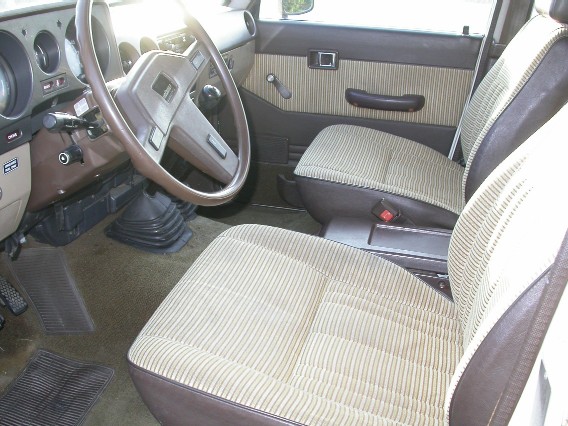 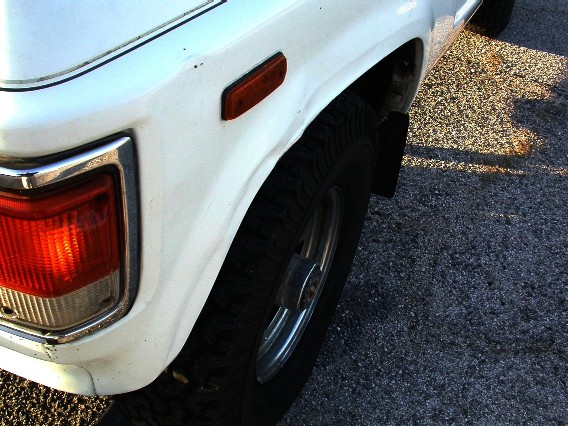 Another MUD member called me interested this truck and asked that I perform a compression test. With all of the receipts I have for engine working I fully expected to get even solid numbers across all 6 cylinders. That unfortunately is not what I experienced. There were a couple 90s and one 55. I'm not comfortable selling until that is diagnosed so I've pulled the listing and this truck is no longer for sell. Thanks to all of you that sent questions. I will update this post again if I'm able to resolve the issues.
1987 FJ60, TBI V8, OME 2", 33x12.5x17s - new to me, in clean up phase
J

sweet truck. If you get the problem fixed let me know.
Juergen Heinemann
97 FZJ80 (Stock... But not for long!):shotts:

What's the avg mpg you've been getting?

No rust at all, around the wheel wells(sp), tailgate, under carriage, etc...
Pics of those areas, as well as under the hood would be great! (motoomi@yahoo.com if you'd rather e-mail them to me).

And on the ac do you think it just needs to be filled/charged or something a bit more involving? (Did it quit blowing cold air rather suddenly or got warmer and warmer gradually?)

We drive this truck very rarely so I do not have a mpg figure for you, I will drive it the rest of this week and get some numbers to reply with.

Truly no rust issues, I'll take close ups and post them to a picture site. I have a rusty truck and this one is not, there are some nicks that are showing rust color but nothing penetrating.

Surface rust starting on the rear bumper is probably the only area and I think that would still polish out, I'll show that in a pic as well as try to polish out a spot tomorrow.

The A/C... I believe it is a recharge issue but this has not worked since I purchased it, my faith in that is from the previous owner during my purchase and not actual experience. I bought a kit to convert it from R12, but haven't done so yet.

This is originally a CA truck, the previous owner had this truck for 20 years (living in CA and then TX) of it's 24 year life and it was mostly a weekend rig for him after the engine overhaul. He used it to get a little sail boat to the lake (boat fit in his garage).

Thanks for the pics!

And no rush on the mpg number.
I'm going to check out the pics in a few.

Clyde-2 said:
Did I miss the asking price ?
Click to expand...

Also to update, I took the truck to a shop to check out the A/C, it was one fitting that was leaking. Now replaced and the A/C is recharged (r134a)and blowing very cold!!! Nice since it's going to be over 100 degrees here tomorrow.