The Good:
Has 22R with 20R head.
Unknown header.
Someone went thru this motor before I got it, and probably added a higher performance cam, and other stuff.
I added a higher flow 22R turbo oil pump and new crank seal from Ted at enginebuilder.com.
Also has been converted to power steering using an 84 4runner box & pump.

Has Budbuilt.com 63" Chevy spring brackets tack welded on. (Unfortunately, I never got to complete the swap.)
Also has one of the first ever Budbuilt double T-case crossmembers made for the 1st gens.
I swapped in a turbo R151 trans, that was a dealer rebuild I picked up, but never got to swap in a 2nd Tcase.

Unknown 3" or 4" springs.
Supposedly has EZ or Lockright locker in the rear.

CLEAN, solid frame for a truck in the NE. It was originally a NC or SC truck, I forget which.
Has only seen 2 or 3 NY winters. Frame still has lots of paint, and only surface rust on it.

The tires are old 33x15x15.5 Swamper TSX/SLs, but are close to bald, and have been siped... NOT street legal.
Body is solid, except the windshield seal came loose, some rust.
Bed is starting to bubble some rust in the floor-to-bedside seams.
Has an Offenhauser manifold, but needs a carb. A Weber would be a good choice.
The two interior plastic covers for the steering column are missing.
The PO enlarged the floorboard hole for the shifter boots, probably to swap out a 4spd for the 5spd it had when I got it. Needs a cleaner piece welded in so the shift boot base fits properly.
Its an 80, but has the headlights/surrounds from an 83, also put in by the PO.
Also, the paint job is ugly...LOL

I need this gone NO later than May 31.

Located in western NY, south of Rochester, close to I390. 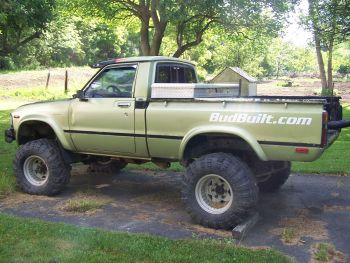 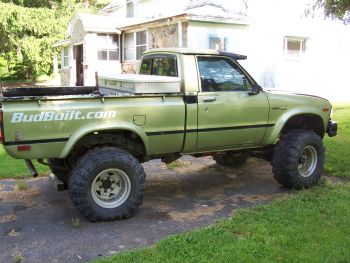 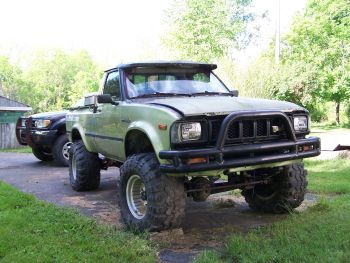 I am in northeast PA and interested in the truck. Have a few questions- does it run? If so what is the need for a carburetor? Have you ever driven it? regularly? Any reason it couldn't be towed on a dolly to a new home in PA? Have any interior photos? If I'd pay for the truck could it sit until the week of June 6? I'm on vacation that week. Lastly, what's the bottom line price for a cash deal? Thanks, Gary S (Shmukster on Mud)
C

Sorry, shmukster. It sold locally the morning you posted.

Thanx to those who asked about it.
You must log in or register to reply here.