I've been a Cruiser head for a while, but I bought my first in 2013. It was a grey '88 FJ62 that was neglected and a little beat up. I was moving to AR for my first job out of college and spotted it on my way into town, looking for an apartment to move into. I went back 2 weeks later and haggled with the guy and ended up driving it home.

During all my Cruiser history I've never created a build thread here, so this will be my first. I'll incorporate some of my past Cruisers into the thread and have included some pics below, so it can be sort of like a catch all.

Back to the 62 - it was somehow sitting on 38.5" TSL's with just a 3" OME and homebrew shackles. The A440 + 3fe hated life and would barely get out of it's own way (let alone stop). I found ih8mud a week before I bought that truck and have been hooked ever since.

Like many guys on here, I get bored easily and buy cheap Cruisers. Then that turns into lots of wrenching, lots of ih8mud reading, and then the natural progression is to take them camping, trail riding, or to a TLCA event around the Southeast. Wash, rinse, repeat, then sell them when I get bored and move on to a new project.

The last Cruiser I sold was my '82 60, which I actually ended up trading for my current FZJ80. I ended up buying back my 60 and promised myself I would never sell it again. There's just something about a 60 wagon to me that's so Classic, easy on the eyes, and has just enough comfort to be the ultimate Land Cruiser (IMO). Also, my 60 has killer patina and a rare(ish) blue ext/brown int color combo (one of my favorite things about it).

The newest project. A red '87 FJ60 with just the right amount of patina, trail scars, and history. Oh yea, did I mention it has NO drivetrain? 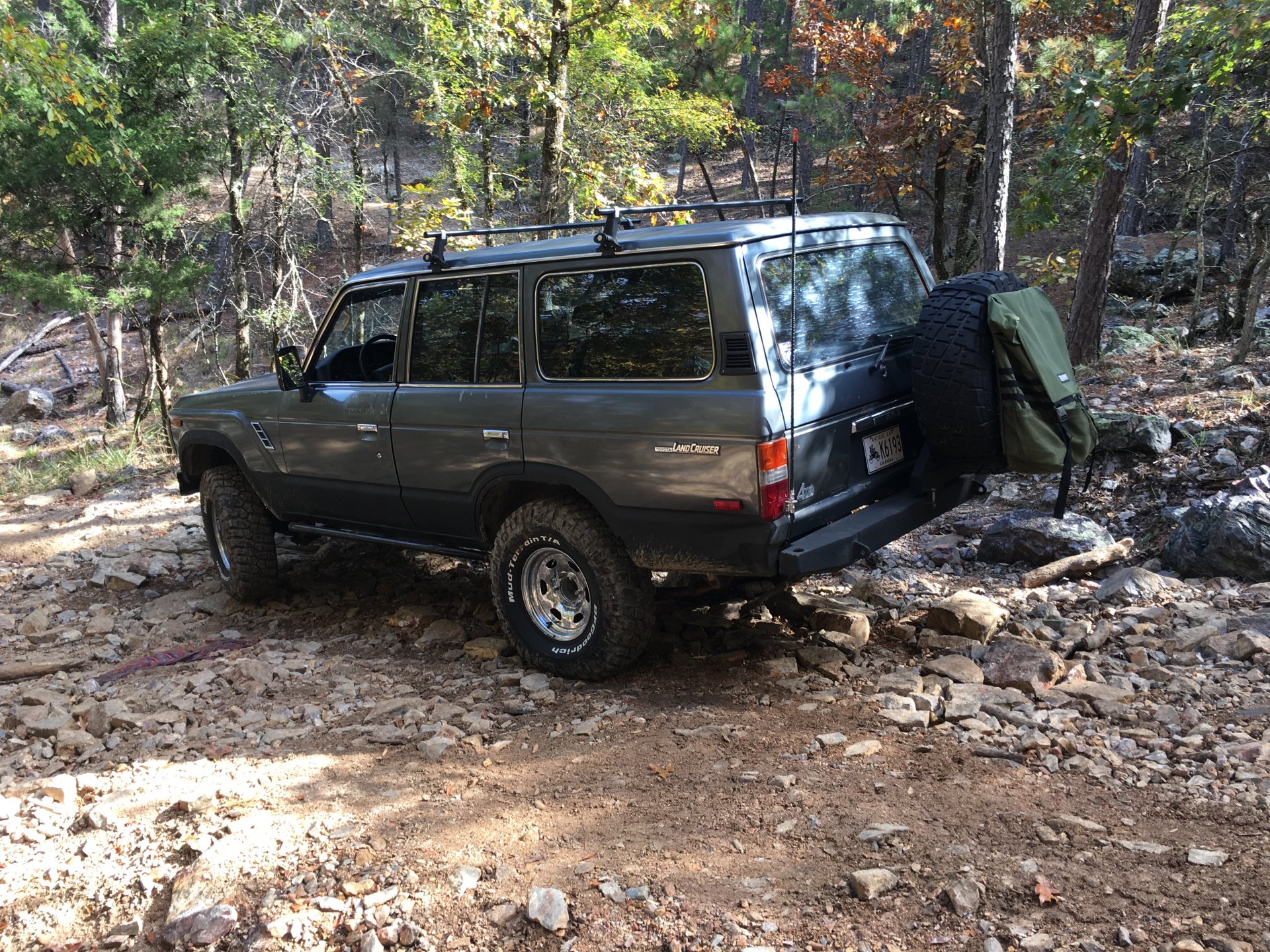 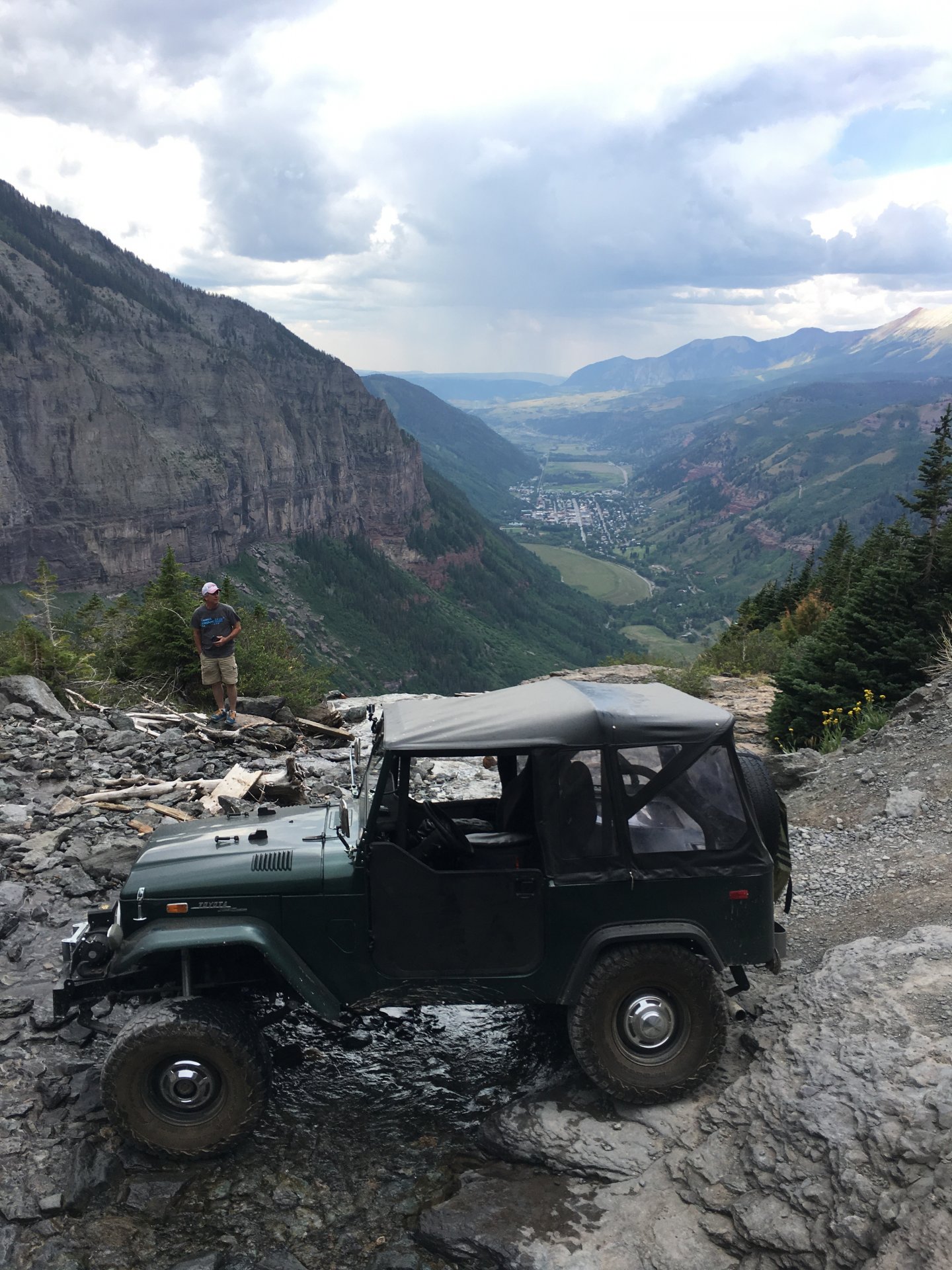 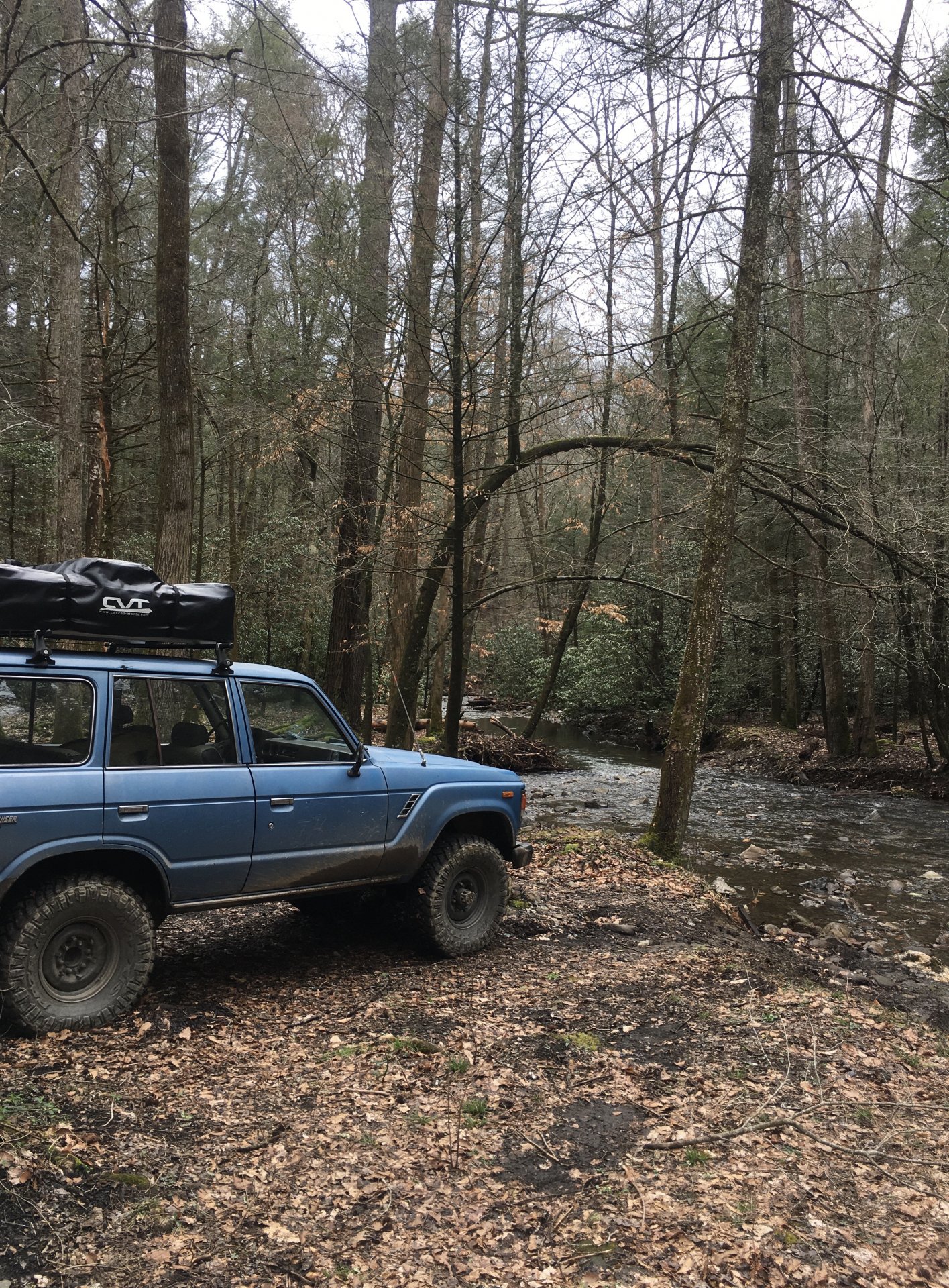 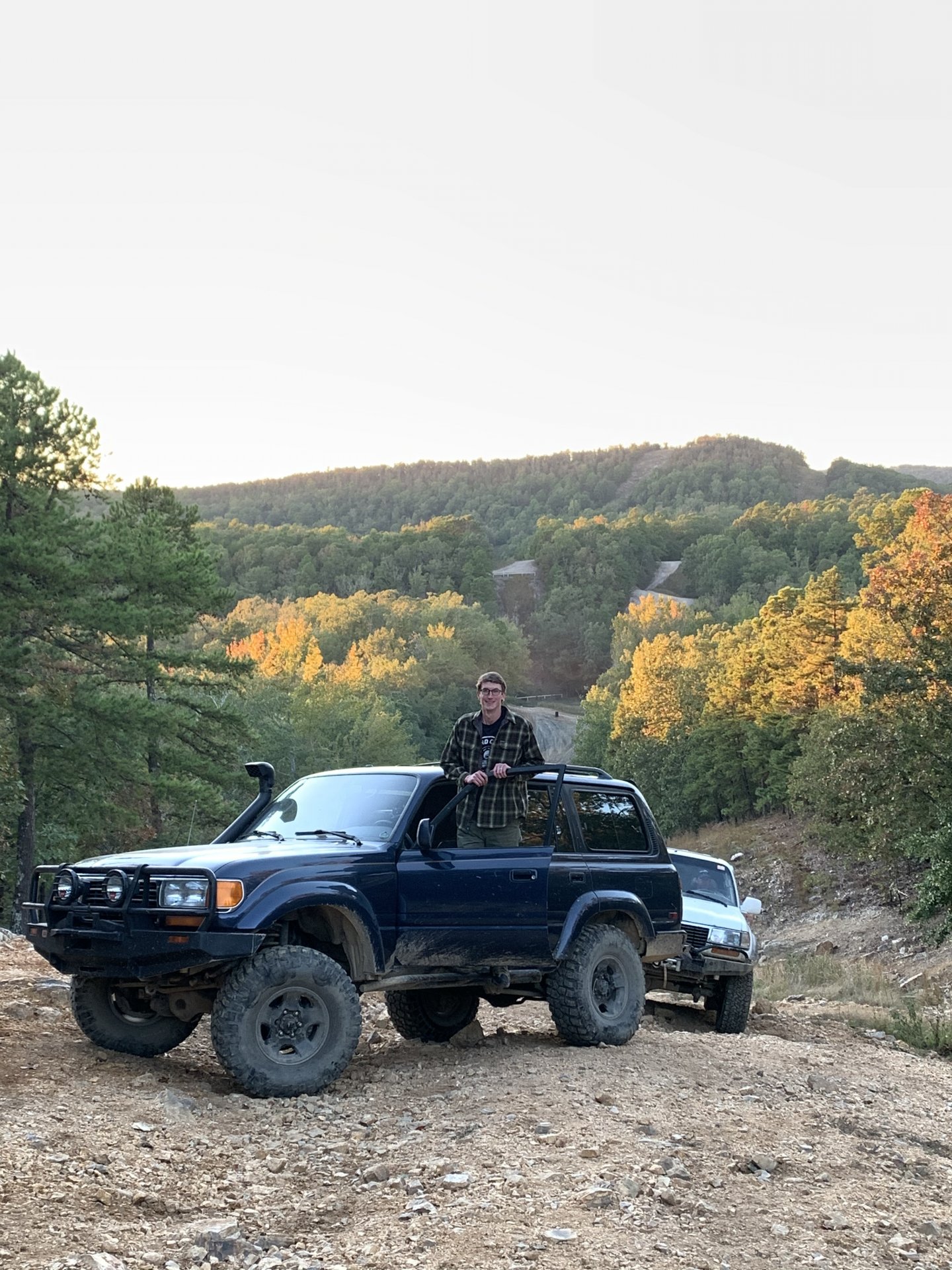 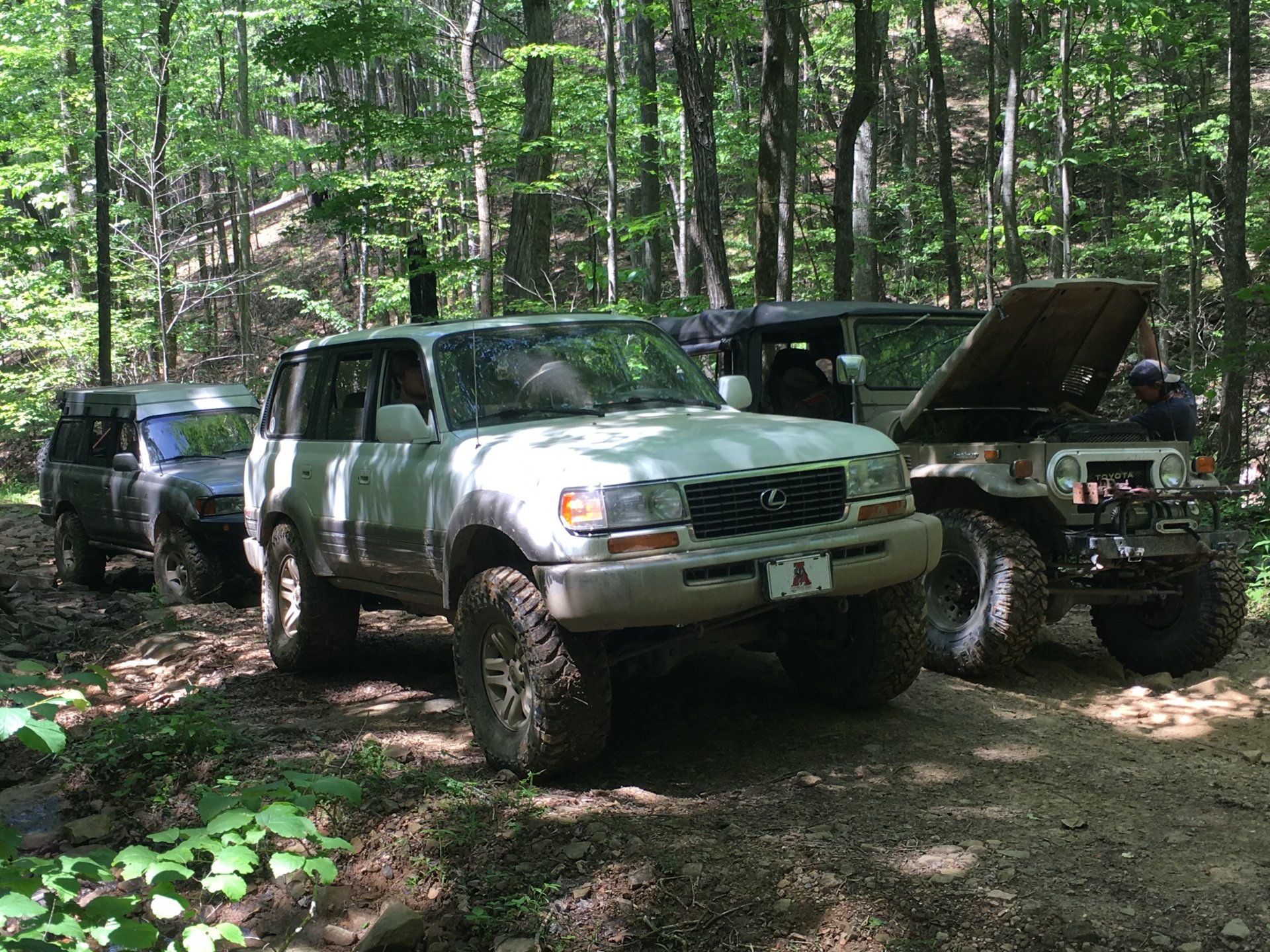 This 60 has been sitting in the same spot in downtown Birmingham for the last 10 or more years. I remember seeing it in HS and then when I moved back here 2.5 years ago, it was still there. Back in April, I drove past it and noticed the owner had painted on the windshield:

FOR SALE
No Motor
205-xxx-xxxx 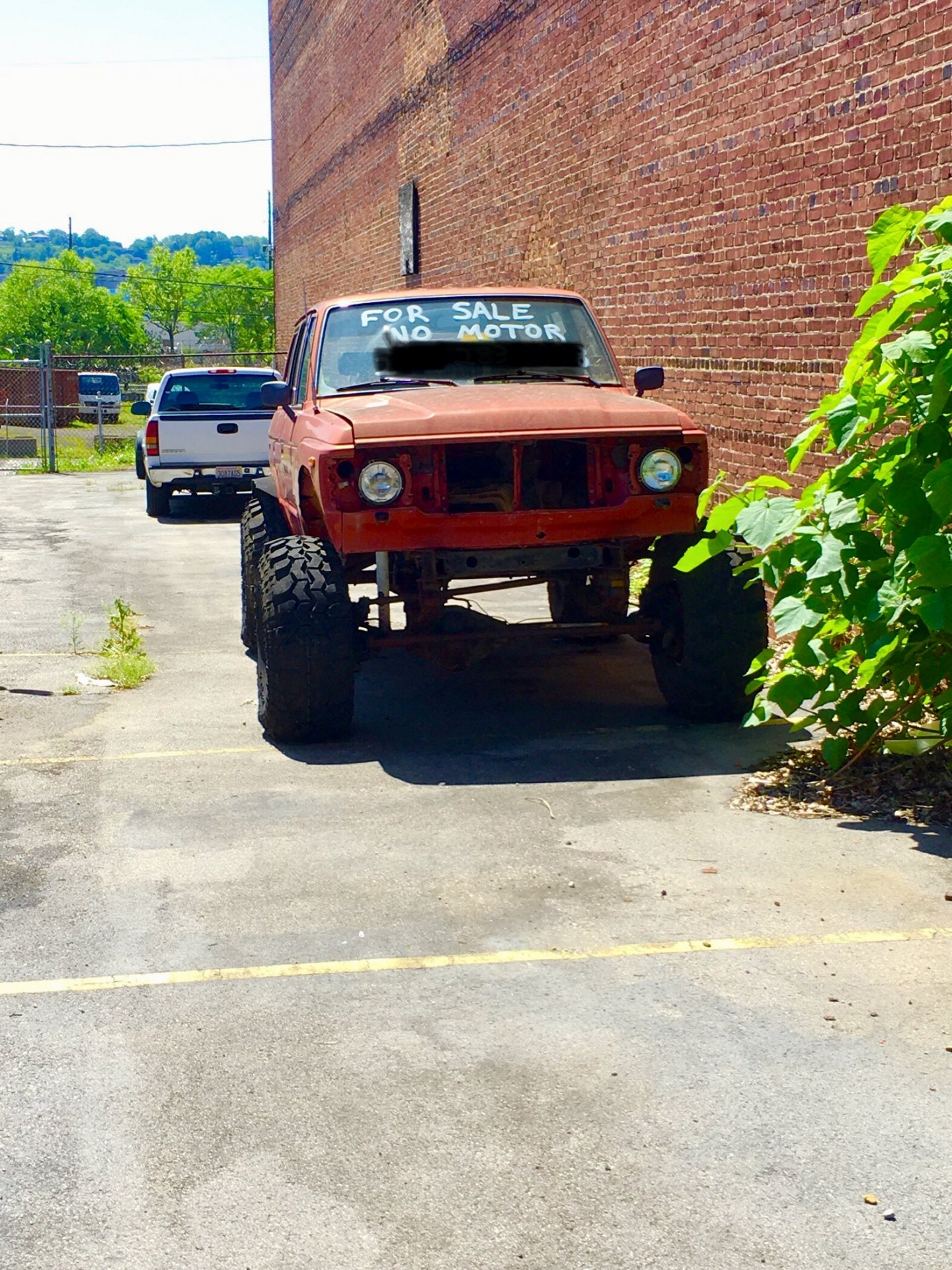 This had me intrigued, so I swung back around and gave the guy a call. Come to find out, he's a big Cruiser head as well (go figure!). He owns a furniture store downtown and has 2 massive warehouses behind where this 60 was parked. He has 2 FJ40's that are parked inside as well (been sitting for a while too).

He told me some brief history on the 60 - it came from out West and has done a bunch of trails in Moab and California. He bought it from a guy (with no drivetrain) and had big plans for it. Well, life got in the way and he never got around to messing with it.

When I initially talked to him, he was asking a pretty far-fetched price for what it was. So I told him I'd pass, but to check out our local club, DixieLand Cruisers, come to a meeting and keep in touch. I would text him every month or so and check in to see if he sold it (which I knew he hadn't), but more importantly to see if he would come down on his price. Well I texted him last week and he mentioned he had a lot of tire kickers, but nobody brought cash. We were able to strike a deal, and that brings me to today.

I've got a buddy with a truck & trailer who is going to help me load it up and get it back home later this week. Once I get it in my driveway, I will take inventory and let you guys know more details on the truck, how it sits, and my future plans for it. Everything is up in the air now, so I'm open to suggestions as to take this.... 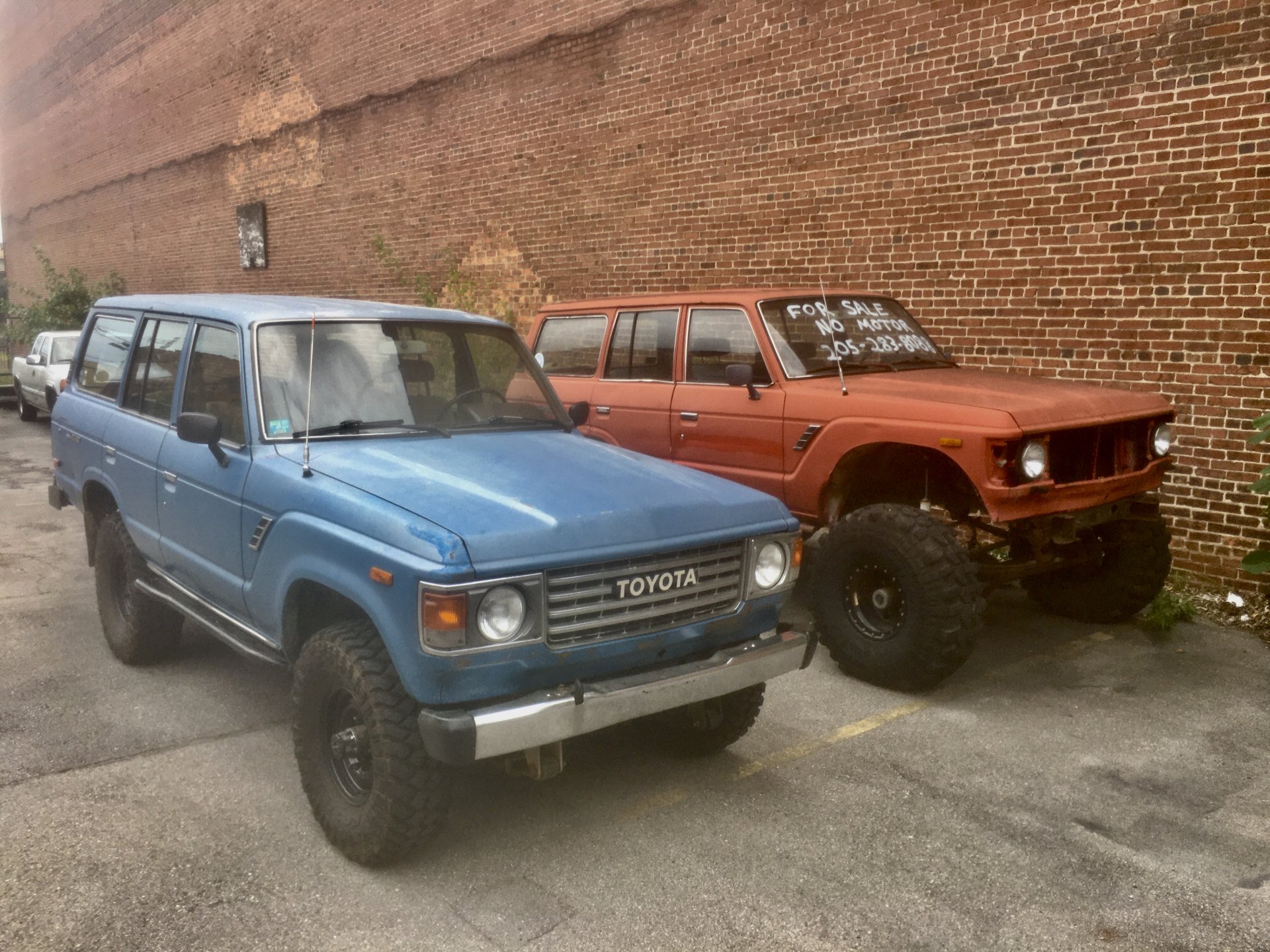 looking forward to another 1ton brother. holler if ya need anything

I finally was able to go pick up the 60 with a help of my buddy Drew @RusticMtn. We had to get a little tricky with a snatch block, winch and recovery strap to get it up on the trailer. Also, it was way to wide to fit on the Uhaul so we had to ride the passenger side up on the fenders (shockingly they didn't collapse). 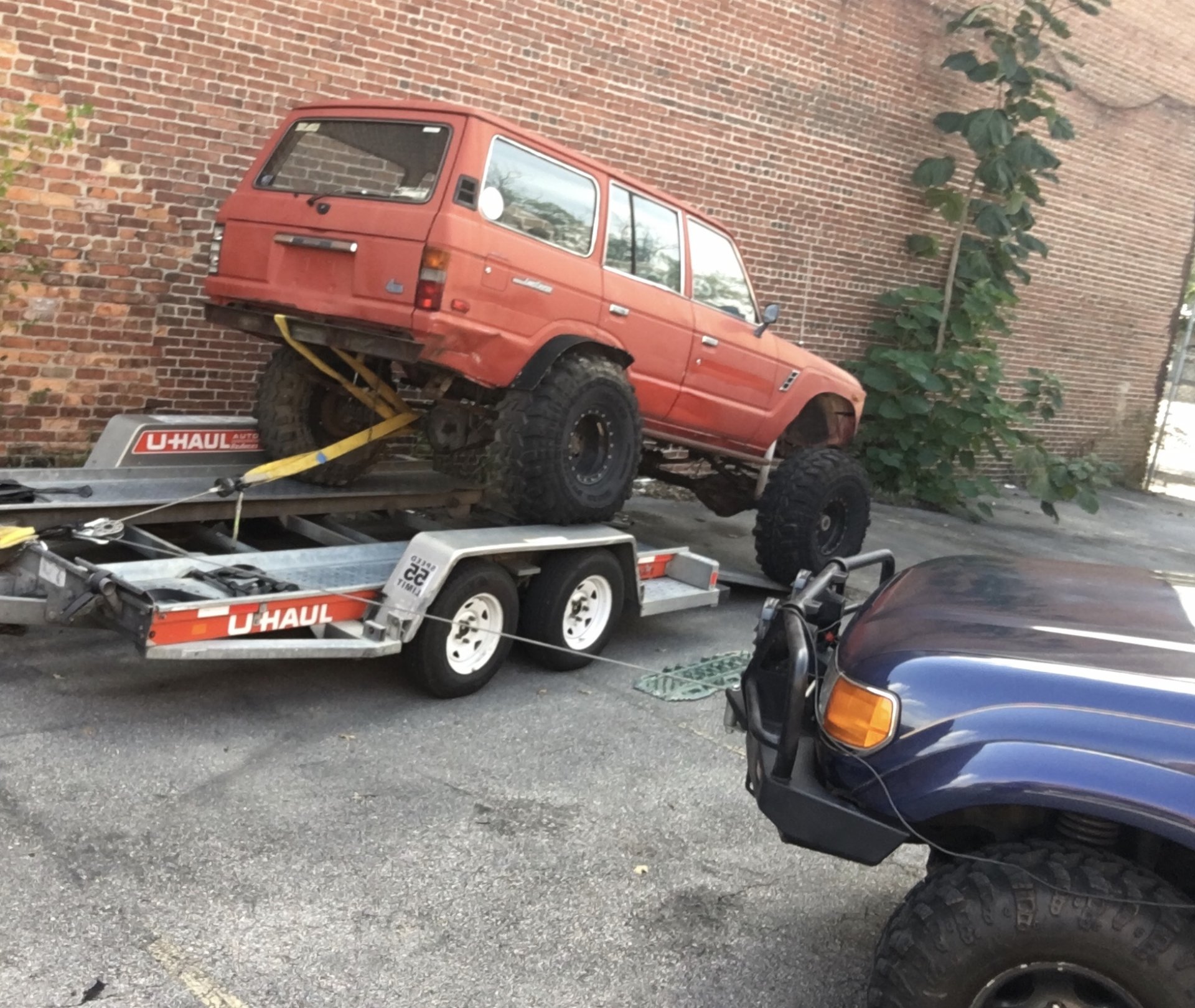 We had to reposition the snatch block a couple of times, but we finally got it up on the trailer and tied down. 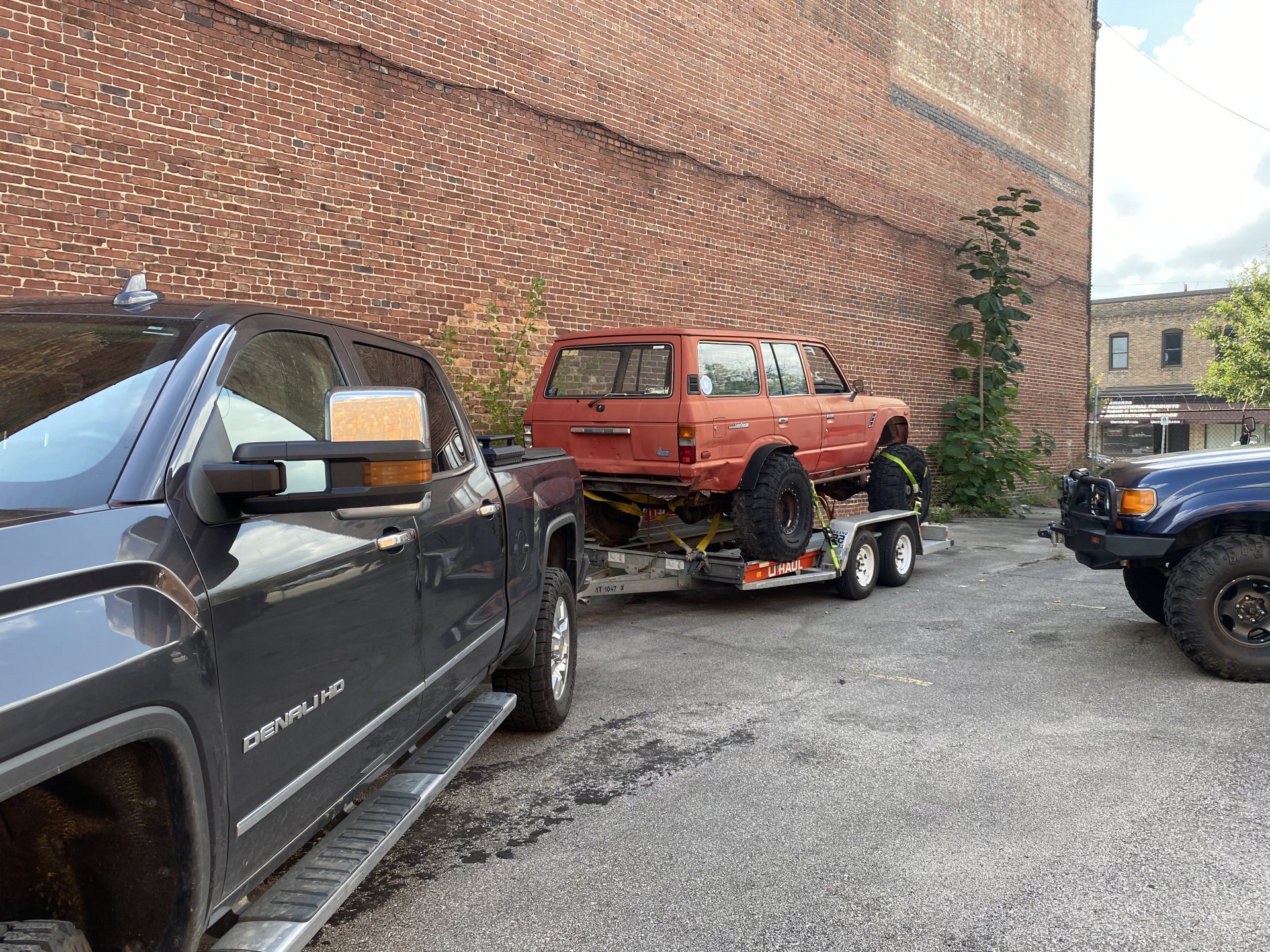 Now that I've got it back home, I'm going to give it a much needed wash and cleaning on the inside and outside and spray the frame and axles down with Fluid Film. The guy I bought it from had a trash can of parts to send me home with (front grill, headlight corners, AC condenser and assorted hoses, driveshafts, center console, full set of spare leaf springs, etc.) 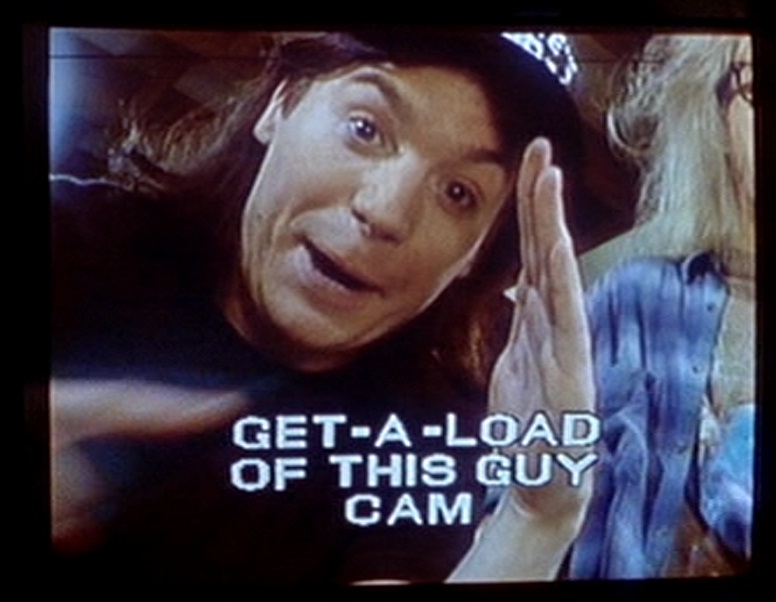 A little update. I haven't really discussed what all is done to the truck yet...so here it goes.

The previous owner had swapped a chevy 350 in it and apparently ran the H42 and stock split case behind it. Already having 350 frame engine mounts welded in is a big reason why I’m going LS. 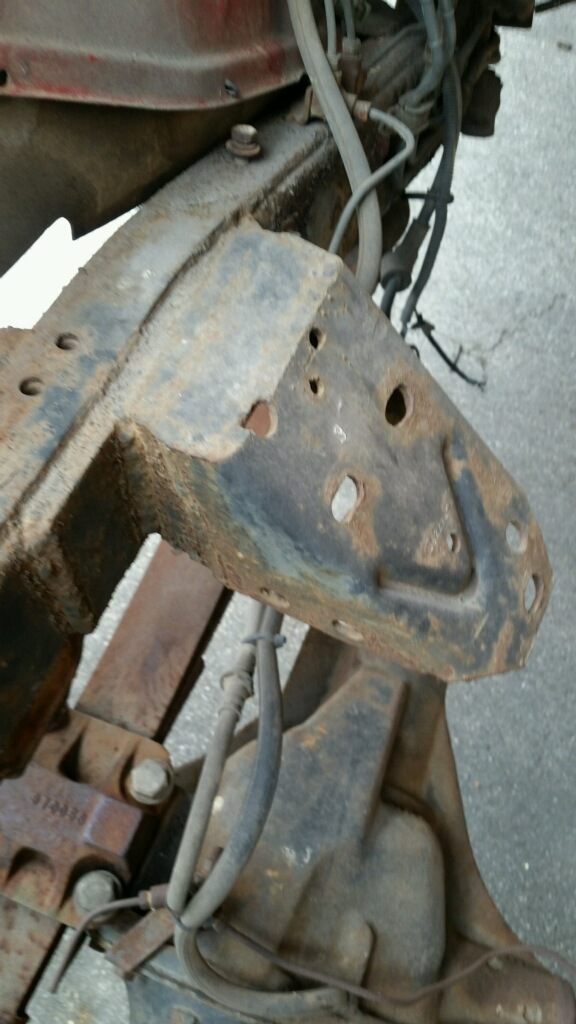 They also swapped Dana 60's front and rear with a SOA (on what looks like stock 60 springs). The spring hangers have been outboarded as well. 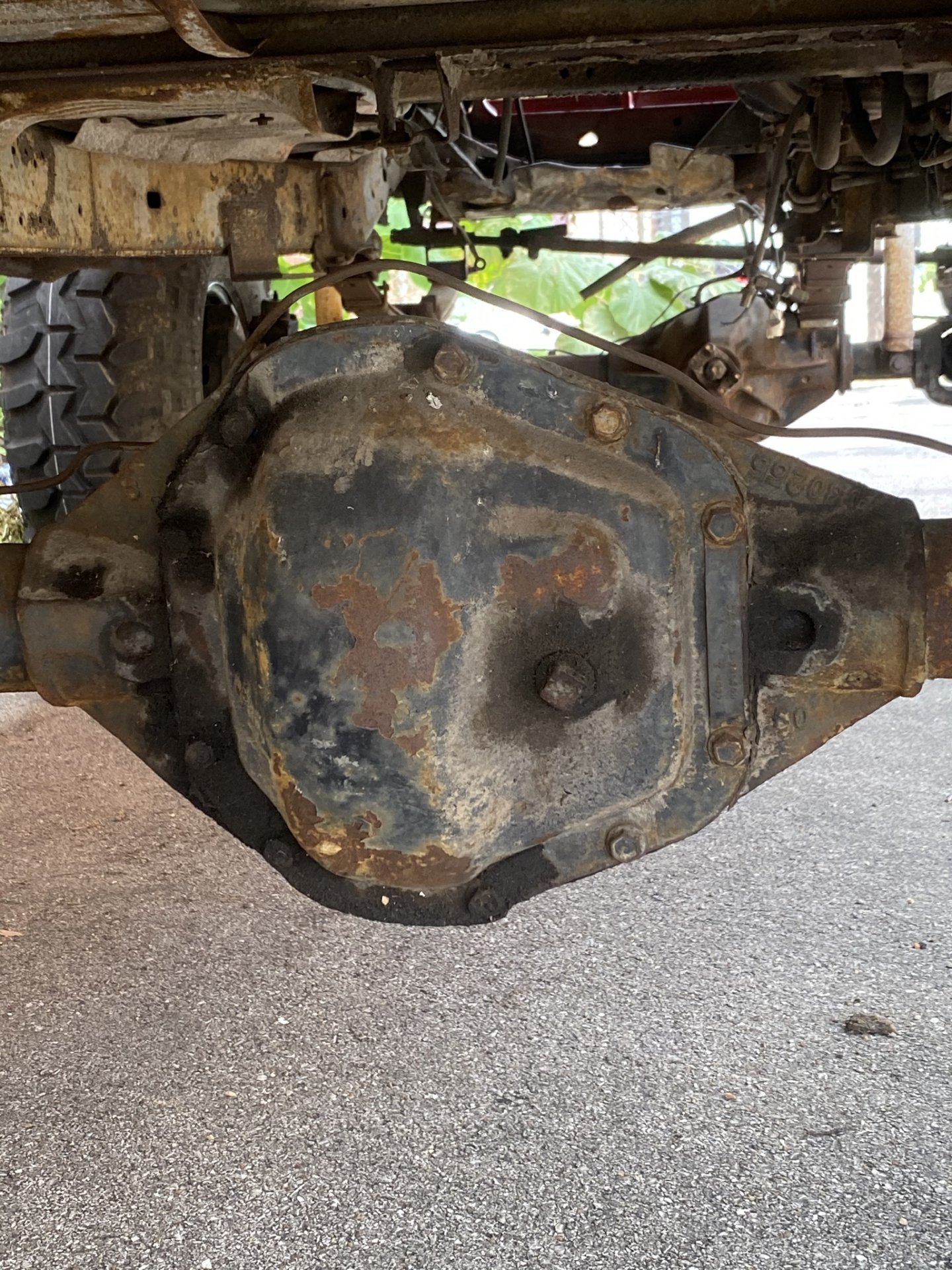 I've been doing some research to help identify the axles I have and came up with:

Rear: Ford D60. Harder to identify. Still had the ID Tag on the rear cover and after searching it looks like it's an early 70's model. You can see it came with 3.73's stock, but has 4.88's, 30 spline axles and a Detroit Locker. Also has been converted to disc brakes (and after researching) uses '73-'87 GM 3/4 ton front calipers and rotors. 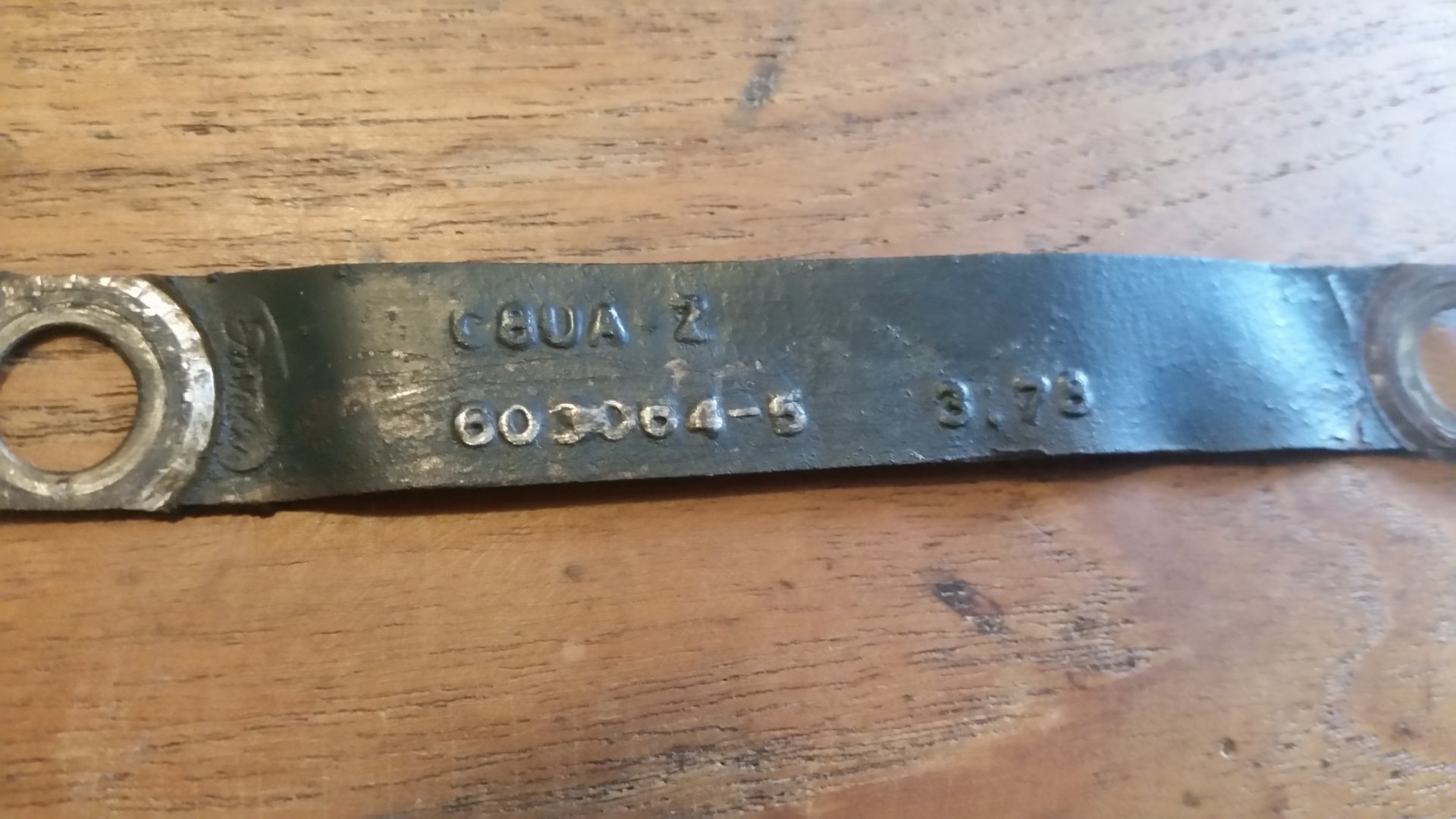 I spent the afternoon yesterday pulling apart the rear axle to rebuild the brakes and verify axle spline count. Removed the calipers, axle shafts, and hub assembly to get the rotors off. 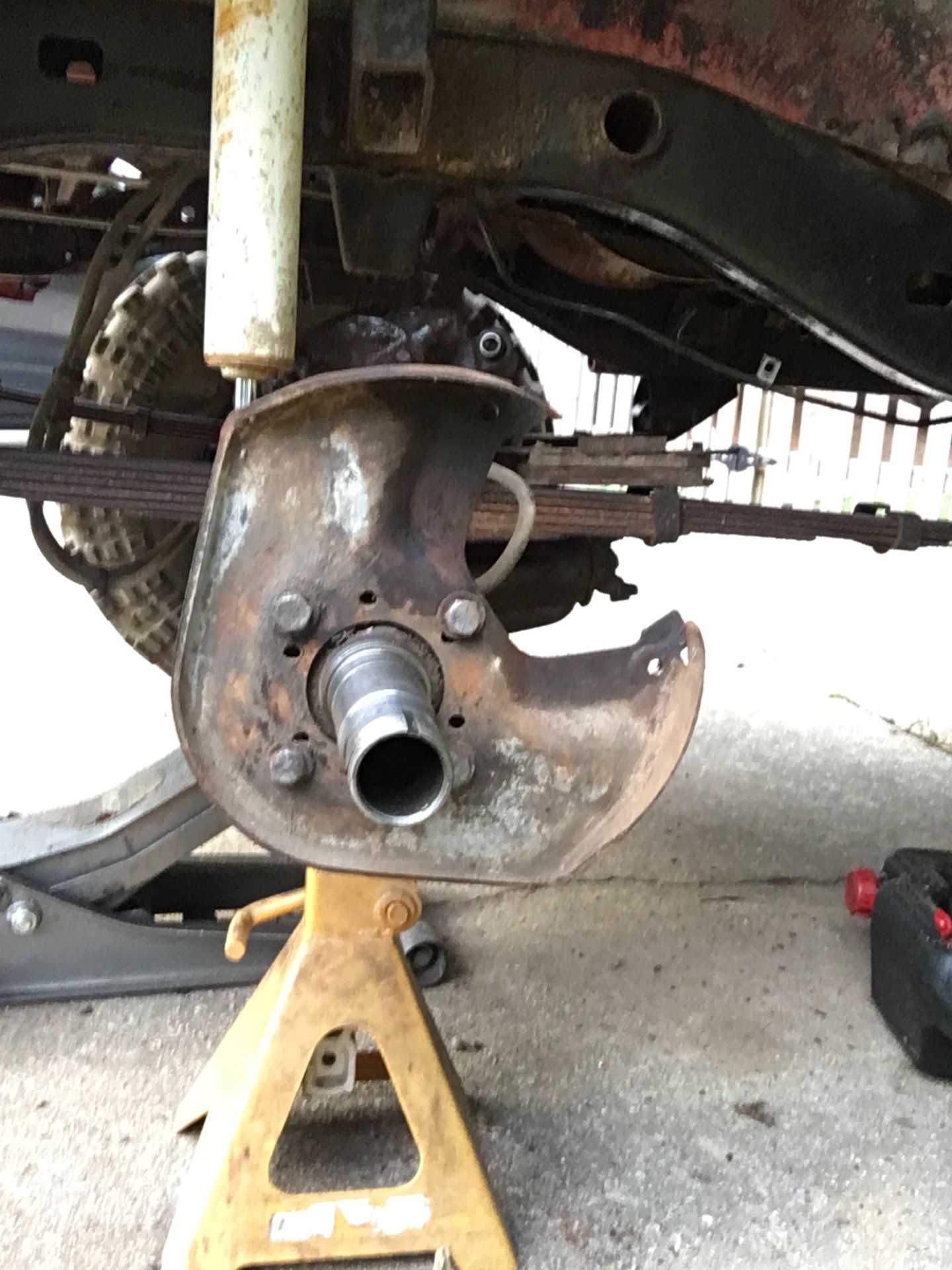 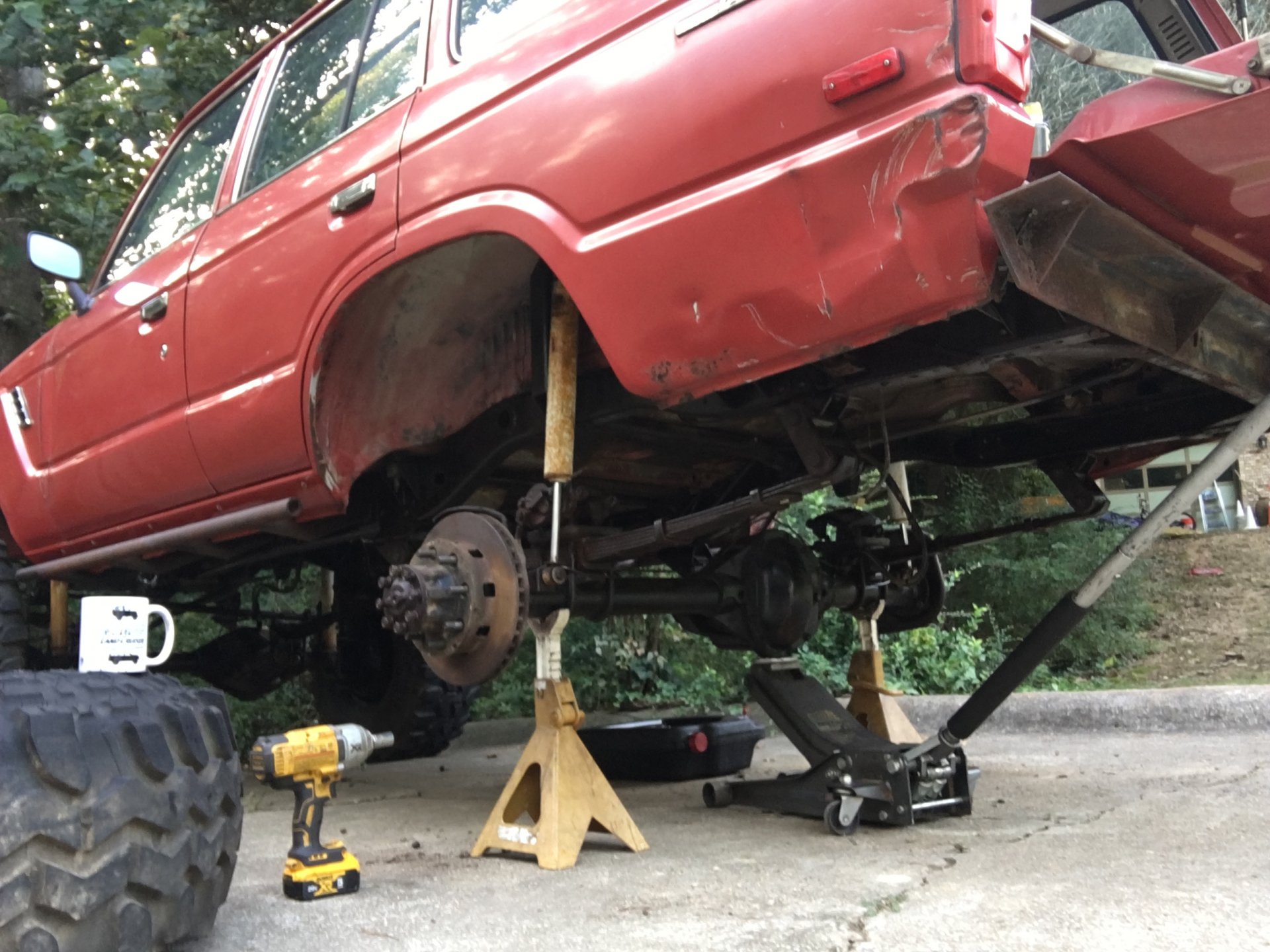 Since the fuel lines haven’t been hooked up to anything in years, I figured the tank was probably suspect to rust. So I popped the fuel sending unit cover and took a peek inside... 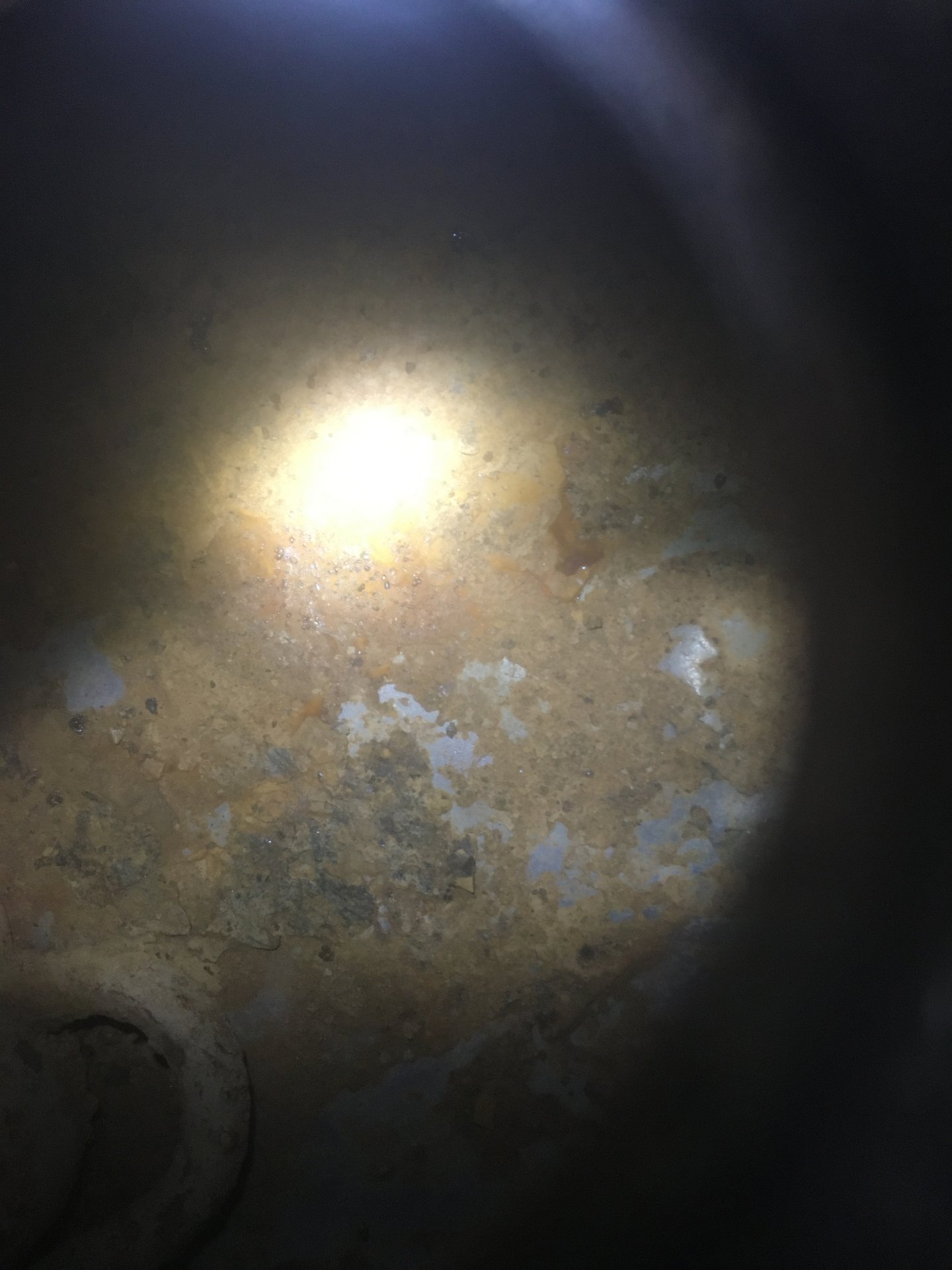 Yep, it’s rusty so I went ahead and dropped it. Luckily there wasn’t any old fuel in it. I dropped it off Friday at a local shop to have them boil it and coat it with Red Kote.
I also need to pull the fuel lines and see if they’re suspect. I know @orion had ongoing problems with his stock fuel lines on his LS swap, so I’m thinking new lines will be in order. 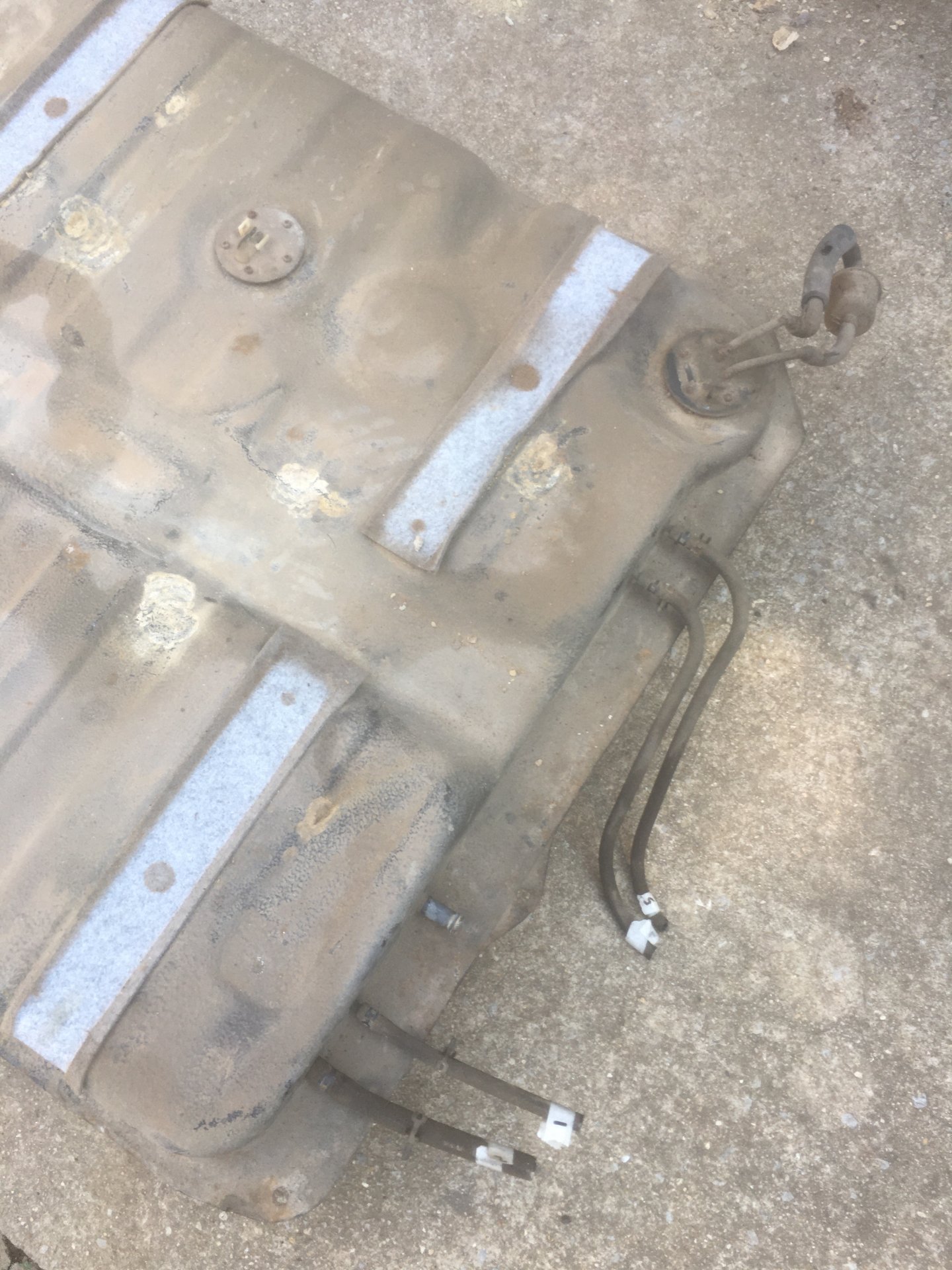 I've been to several local junkyards over the past few weeks looking for engines/donor trucks. At most places, the engines are already pulled and it's just the block with no accessories or harness/ECU. I ended up going to the local Pull-a-part where they had a lot of different GM trucks to chose from, but most had been picked over. Found out they have a "new inventory" notification on their website, so I waited until they had some fresh trucks on the lot before I went down there next.

Got an email yesterday saying they had a '00 Tahoe and '02 Suburban on the lot, so me and @rickyears went down and ended up pulling the 5.3 out of the Suburban. My plan was to just buy the whole engine, but decided I might as well buy the 4l60e that came with it. Mainly because we were running out of time and I didn't want to separate the 2 at the yard. I will sell the trans if I don't end up using it. I just picked up an SM465 this week as well, which is what I originally planned to run for a transmission. 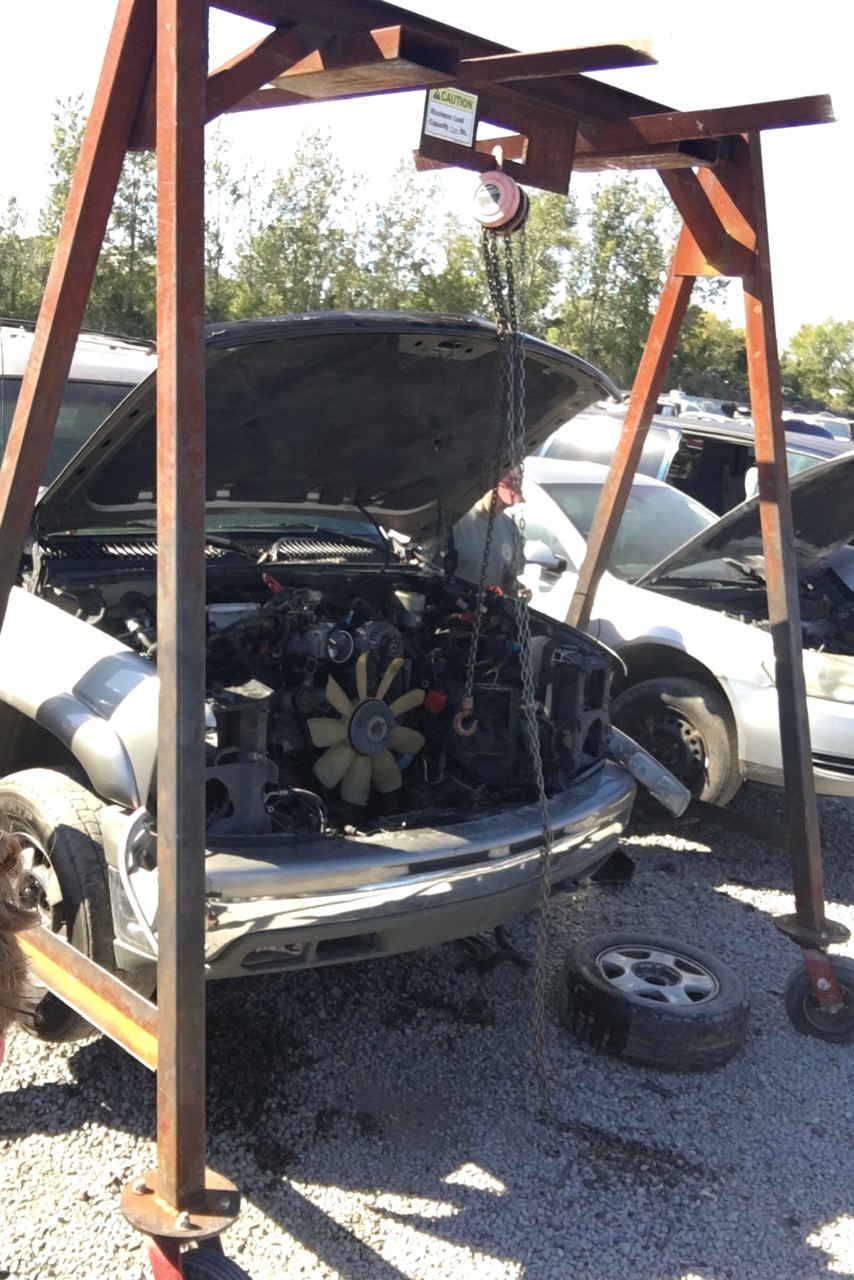 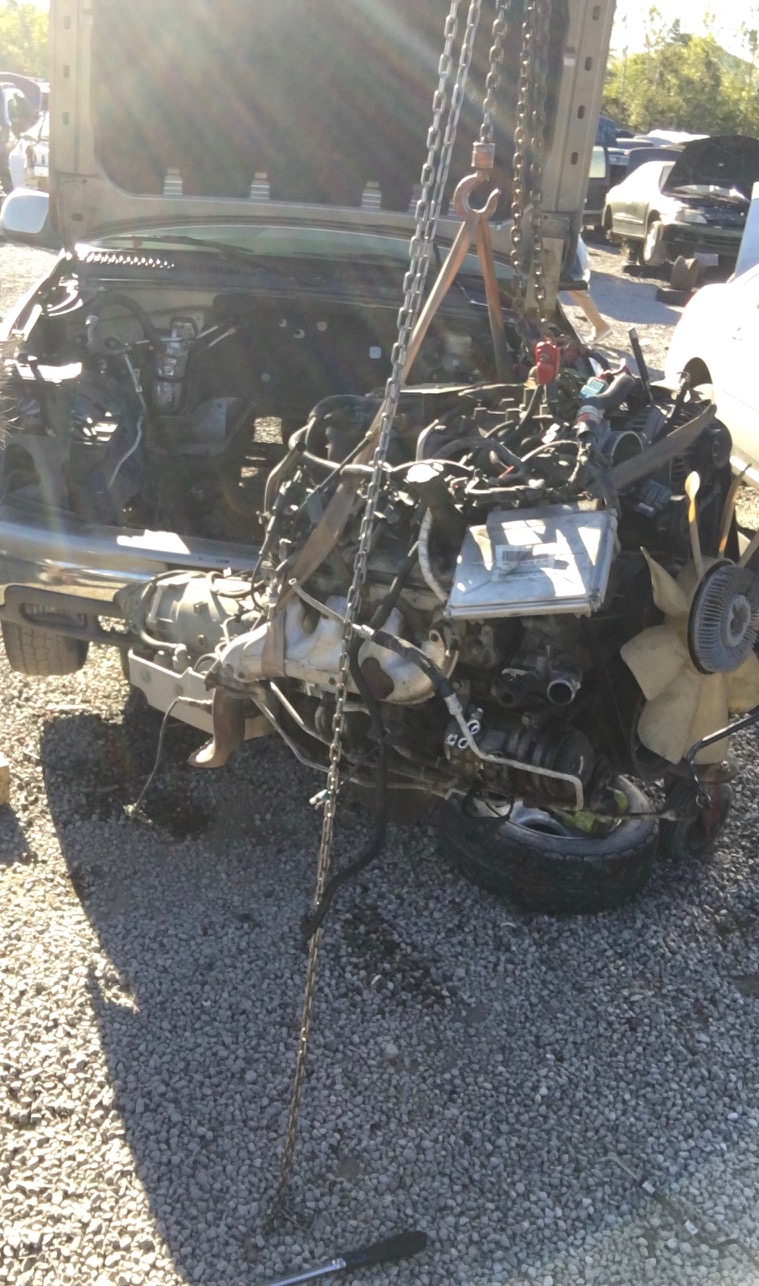 I like the 465 in my pickup. Not sure I’d want it in a cruiser. It’s a slow shifting old beast.

FJACS said:
I like the 465 in my pickup. Not sure I’d want it in a cruiser. It’s a slow shifting old beast.
Click to expand...

This will mainly be an offroad rig and will not see much highway use. I'm debating using the 4l60 instead, but we will see.

Bama4door said:
The Sm465 I picked up is a 2wd version, but it was really cheap and came with the bellhousing and clutch fork. I mainly bought it to have as a spare, but I really need to find a 4wd version (so it can bolt up to my 205). AA also sells an adapter for 2wd sm465 to D300, but I know Johnny had issues with that tcase in Moonshine a few times, so I'm leery to go that direction.
Click to expand...

Elbert said:
np205 is the old school king of HD transfer cases (GM), the GM auto trans is also a good choice in my view
Click to expand...

tmxmotorsports said:
Running one in a ls swapped fj60 with nv4500 and currie enterprise ford 9inch rear axle does the trick
Click to expand...

I ended up buying a GM 205. I believe I’m going to go ahead and run the 4l60 that came with the 5.3. Overdrive would be nice to have on the highway until I get a truck/trailer down the road.

I also picked up my gas tank today from the radiator shop. They said it took 4 coats of RedKote to get all in there with all the baffles. Now I can go ahead and order the fuel delivery stuff and slap that in. Having a hard time deciding between an in tank setup vs external pump. It seems the consensus is a in tank setup, but it’s quiet a bit more. Thoughts?
Cole - TLCA # 24666 - DixieLand Cruisers
'82 FJ60, '87 FJ60, '92 HDJ81

I got a 38 gallon 62 tank in my 60. It's a hefty Walbro pump to deliver 75psi to the Holley Sniper. I have to hear it working constantly, it is loud. Just didn't want you to make my mistake. There is likely a work around.

internal gas pump (inside the tank) is the better option. I have a walbro external pump and its been fine and you can hear it from outside the truck if you are close to the passenger side frame, but its not that bad (it does not bother me). But all things considered a in-tank fuel pump is best. Yea I can change my fuel pump on the ground without removal of the gas tank but thats really not that much of a plus, given that I've never had to do that.

Talk to mosley motors on in-tank fuel pump setup, II believe he did a nice write up some-where or maybe he has info on his web site.
1986 FJ60
5.7 Vortec
KK4FHI / STLCA / CLC

tmxmotorsports said:
Running one in a ls swapped fj60 with nv4500 and currie enterprise ford 9inch rear axle does the trick
Click to expand...

LS Intake Question (This is FJ62-related)