TurboClunker (a.k.a. cheap-ass slaps a turbo on his LX)

I just wanted to document this process for posterity. I seemed to find myself occasionally saying on the forums that turbo is such a great bang/$ option compared to the TRD/Magnuson route (which is also a great option, depending on your needs [CA]). But rather than just typing it on an internet board and feeling smug about what I had read somewhere, I thought why not actually try it? Thanks to @scottryana, @lilevo, @mtncruiser97 and @2KCruiser for providing some ideas.


It should be said that I do not suffer from the acute OCD/”while you’re in there-syndrome” commonly found on ih8mud. I am more of a “good’nuf” type of guy. I did not do any PM in preparation for the turbo: no HG, head studs, injector cleaning, etc. The plan is just to slap this thing together and see how it works.

The idea is to basically mimic the TRD/Magnuson supercharger: 5-6 psi, no intercooler, no tuning. Once I’ve done that and documented my results, I’d like to add either an intercooler or meth injection and maybe turn up the boost a little bit.

I will be following the basic recipe that @scottryana was so kind to provide: So are there any TRD Superchargers left?

I did deviate from the recipe here and there to save a buck, but all the major components are quality USA or Japan parts. If you’re not concerned about Chinese junk, you could probably save about $300-$400 compared to what I spent by getting a knockoff wastegate, BOV and turbo. If you have better fabrication skills than me, you could save a few more Benjamins by making your own y-pipe using the stock exhaust manifolds (this would be awesome with my twin-scroll turbine housing), but after some buddies and I cobbled together a DIY turbo kit for a 3.4 Tundra last week (crossover pipe and turbo flange was a lot of work and a lot of “oh s***” moments), I gave up on that idea and just coughed up the money for a cast manifold. That was a tough battle with my inner cheapo.

Baseline dyno is scheduled for next Wednesday and I still have parts trickling in the mail, so don’t hound me for updates BTW, the dyno is mainly for MUD. I should start a gofundme account so you guys can pitch in on my dyno pulls (I told you I was cheap!) 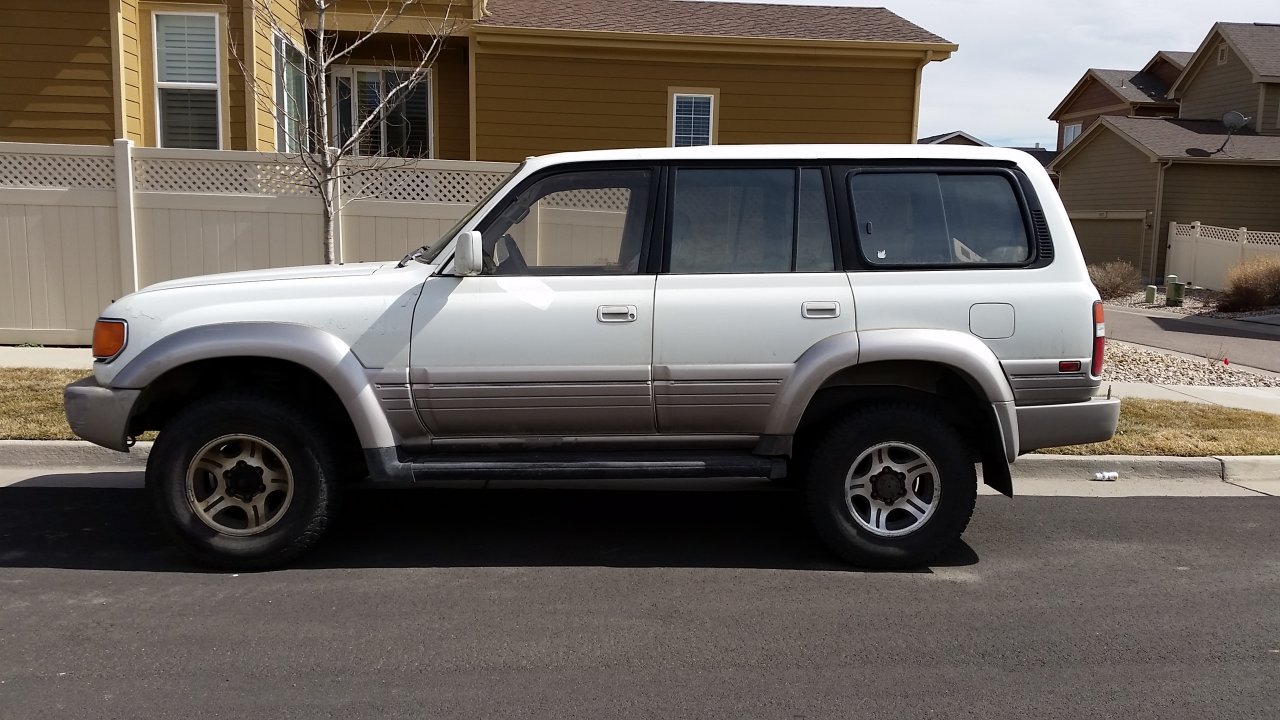 BTW, so far I have spent $1504 including shipping and I *think* I have purchased all the major stuff. I'm just waiting on hoses, clamps and pipes until I have a better idea of how things are going to fit together in the engine bay. I will post a complete list of parts and cost and where I found it when I'm all done.

Seriously. I like this. I don't have the mud OCD either. Slam that bitch together and if it blows up it blows up.

Practice run with my buddy's 3.4 V6 5-speed Tundra. Been driving it all week and it hasn't blown up yet! 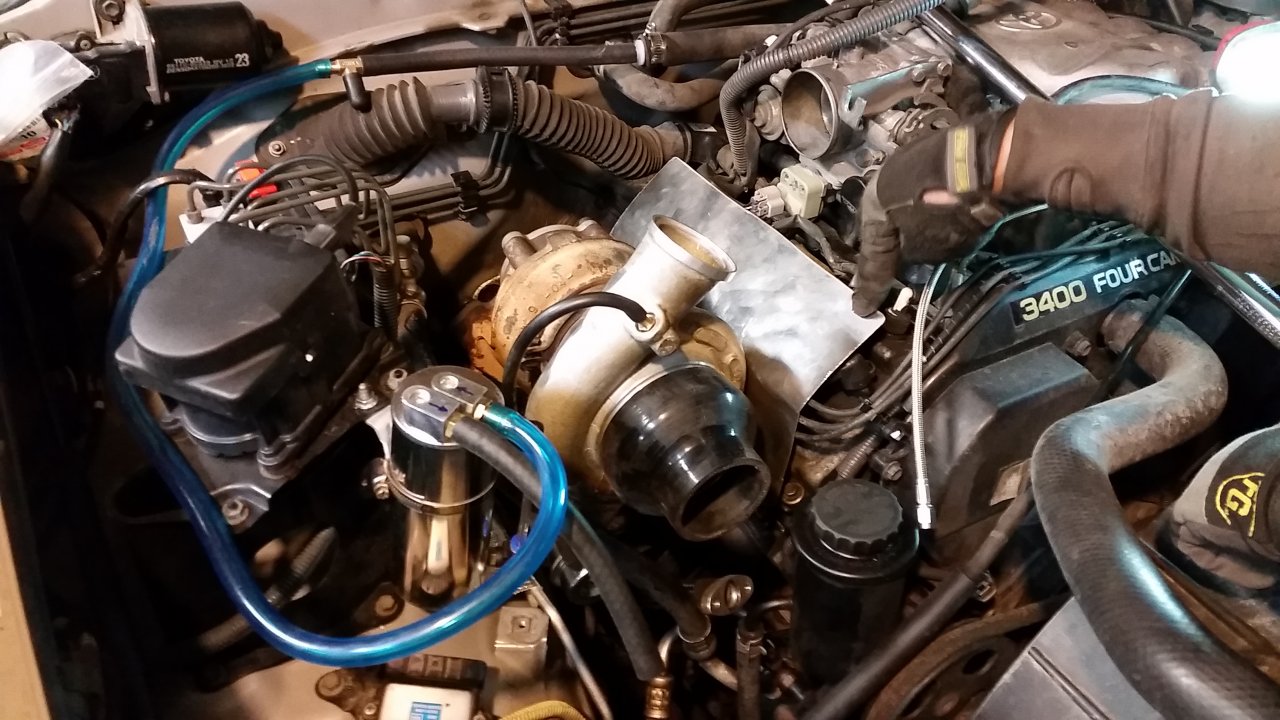 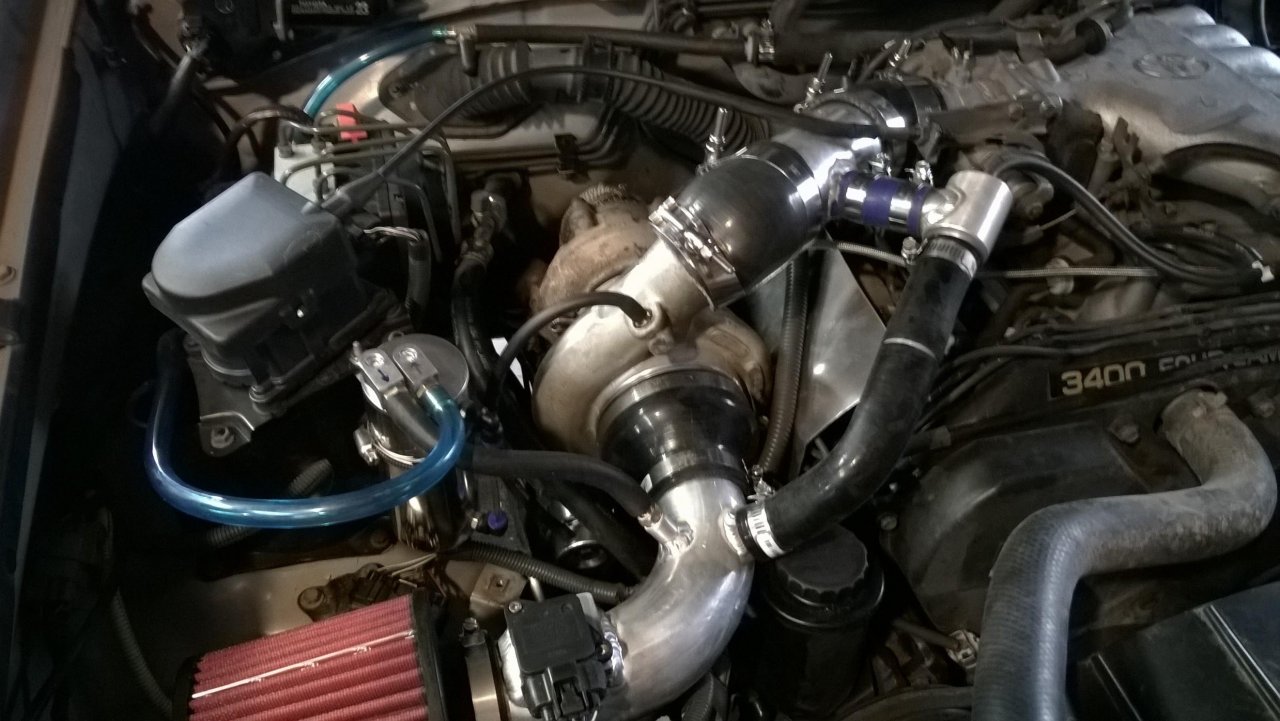 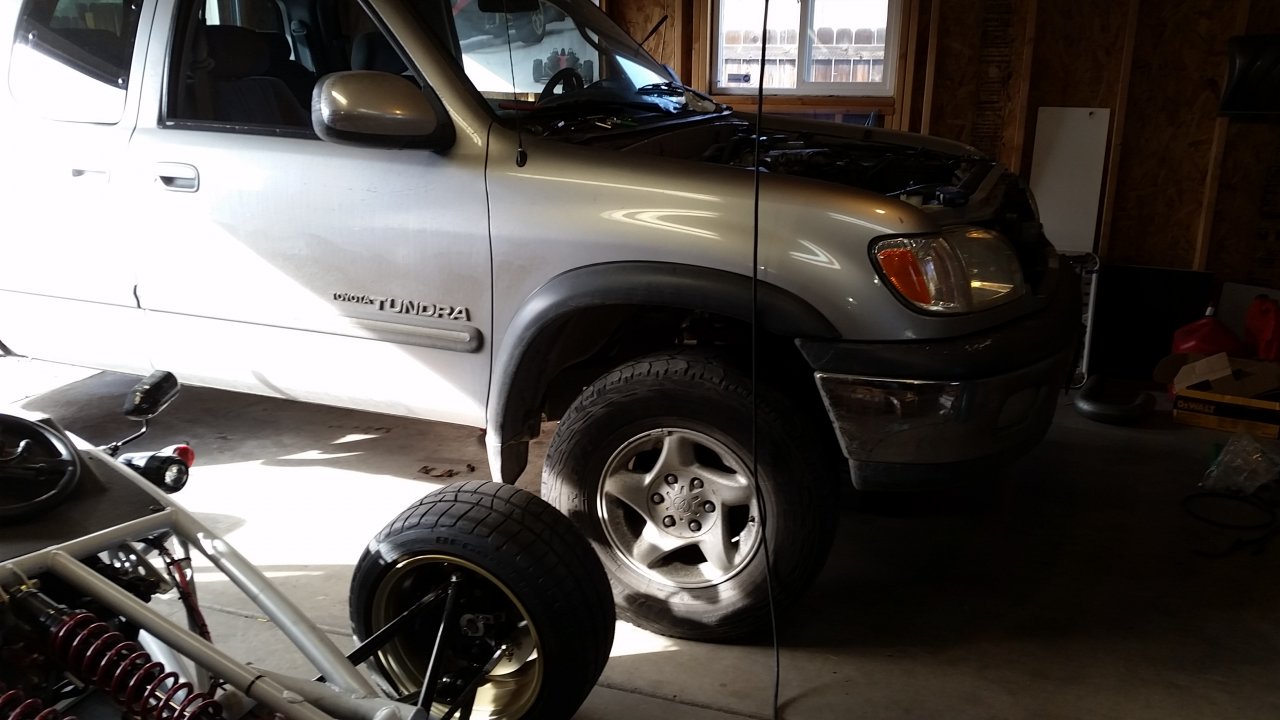 I'm going to be attempting this at some point as well with my 93, but having a 95+ definitely makes it easier/cheaper. At least with 10psi or less.
I can't wait to see this done and the dyno results!

bcart1991 said:
More pictures of the Ariel Atom looking thing in your buddy's garage. Oh, and more turbo details as they emerge, too.
Click to expand...

Homemade racecar inspired by the atom, but totally designed and built from scratch. Powered by a built up and turbo'd honda B16A makes 345whp and weighs about 1200lbs
"The Clunker" 1996 Lexus LX450: turbo, lockers, cupholders, 340k and counting
"The Minivan" 2010 Lexus LX570: mall crawler, camper hauler
Just the latest in a loooong line of Toyota 4x4 s***boxes

Can the stock fuel pump support boost? Also, do you have a thread on the tundra?
Build Thread: FJ60 axle in my 40
Build #2: Urban Assault Runner Build
Build #3: Urban Assault Cruiser

damn where in CO, are ya? also what turbo and turbo manifold are you going to be using? i want to do this to my truck here soon if i can stop throwing money at guns and other stuff for my truck!
1997 LX450: De-Flared, Slee 4" lift & Short Bus Front Bumper, Custom Rear Bumper w/ swingout, Sliders, 37's & 5.29s, ....The Trail Whale (aka Moby Dick)

The stock pump can support as much power as the TRD SC will make.


White Stripe said:
Can the stock fuel pump support boost? Also, do you have a thread on the tundra?
Click to expand...

I'm using the treadstone cast manifold. As far as I'm concerned, it's the only real viable commercially available option for an offroad truck. CX Racing makes a manifold, but it is tubular steel and I don't like the prospect of a chinese tubular manifold bouncing around offroad with 40lbs of turbo hanging on it, although you could potentially reinforce it. Plus, CX racing manifolds were known to crack back in my "import tuner" days

Cast just seems like the better option for a truck, even if I do lose a few HP. Turbo is the same Borg Warner listed in Ryan's formula in the OP. S300SX .91a/r. I just happened to get a really good deal on it by shopping around

:edit::edit: No thread for the tundra. That was literally just a weekend project done on a whim. Took about 16 hours (2-3 guys dividing the labor and a few trips to the hardware store and exhaust shop) to get it up and running. The LX should require a lot less fabrication, so hopefully it will go a little smoother
Last edited: Mar 11, 2016
"The Clunker" 1996 Lexus LX450: turbo, lockers, cupholders, 340k and counting
"The Minivan" 2010 Lexus LX570: mall crawler, camper hauler
Just the latest in a loooong line of Toyota 4x4 s***boxes 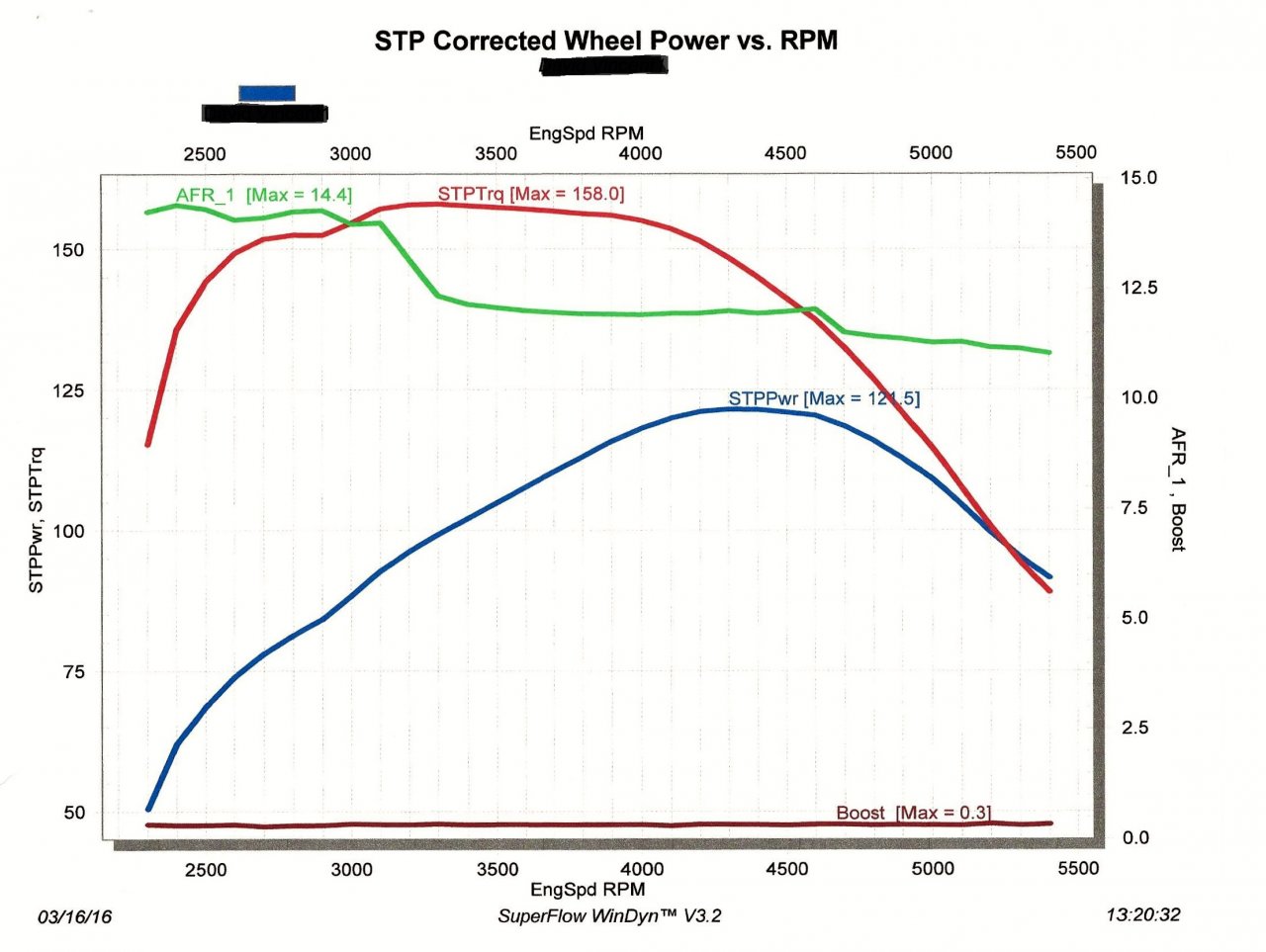 Woof! Now before you go telling me that my 80 is a dud, this dyno is a Superflow (eddy current) dyno that will typically show lower numbers than a dynojet or mustang. And it's at 6000' elevation. The dyno operator doesn't fudge around with correction factors to make his shop look good. This particular dyno has a reputation as an ego killer. I have read on MUD that my truck should make 140-150hp stock, so 120hp seems low. But I can say it runs just like every other stock landcruiser (better than some), so I'm happy with this as a baseline. It will be re-tested on the same dyno, so all I'm really looking for is a percentage type increase.
"The Clunker" 1996 Lexus LX450: turbo, lockers, cupholders, 340k and counting
"The Minivan" 2010 Lexus LX570: mall crawler, camper hauler
Just the latest in a loooong line of Toyota 4x4 s***boxes

Strapped down and rearin' to go: 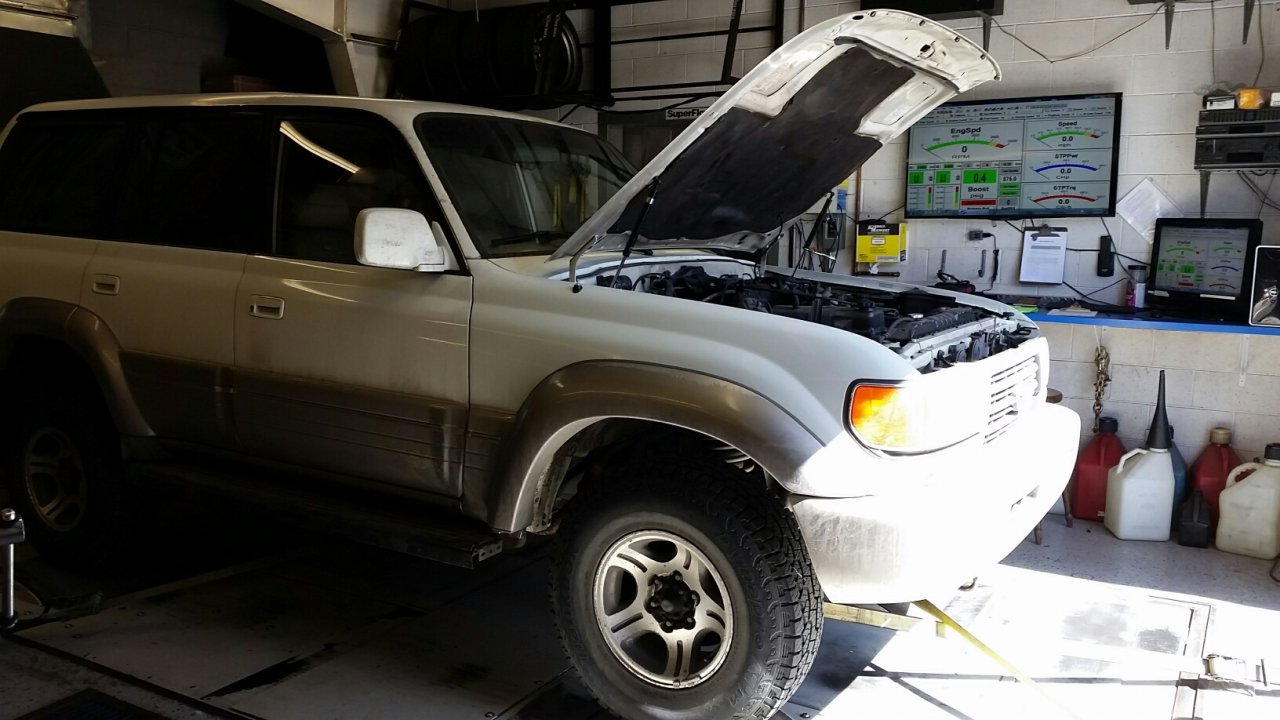 More Ridiculous Rambling
http://forum.ih8mud.com/threads/80-series-where-to-start-again.848616/
You must log in or register to reply here.