Well, here goes my first attempt at this ROTW thing…

I probably fell in love with Toyotas as a kid watching “Back to the Future” and seeing Marty McFly’s black Toyota dream truck. So in 1996 at the age of 19, I bought a 1987 Toyota truck. Frankentruck very slowly evolved over the last 12 years as I did to the wheeling world. I wheeled this truck all over Colorado, Utah, and Wyoming and came to believe that anyone who drives anything other than a Toyota offroad is a fool… 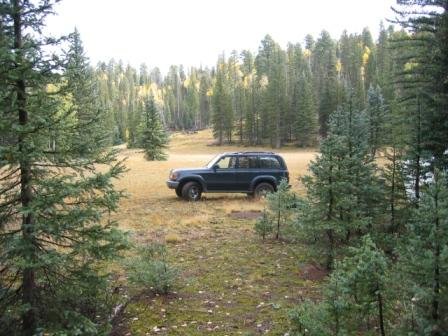 I was very busy working on Frankentruck and building a family so Graceland One served us primarily as a DD and weekend camping warrior vehicle paired with our Cabelas tent seen here: 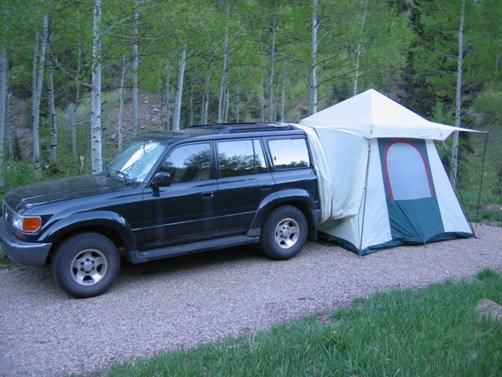 Of course, at this point in the Spring of 2005, truck mods weren’t nearly as important as family mods. We had wasted no time, and were anxiously expecting our first child on this camping trip. Although only 10 minutes from our house (and the hospital), my wife was quite the trooper to go camping nearly 9 months pregnant. She still talks about how sleeping in the Cruiser those nights were the most comfortable she was during the late periods of her pregnancy. Here's the Maroon Bells where we were camping that Memorial Day weekend with the wife and baby-to-be in the foreground: 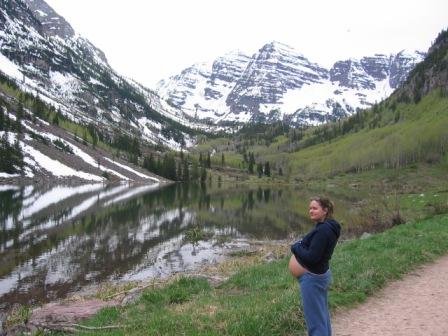 Although I had tackled the usual PM issues, I hadn’t taken on any mods on the 80. Finally in 2007 with another baby on the way, I realized that Frankentruck’s days of wheeling were limited in this family and my focus needs to be turned to Graceland One. With the limited budget of a young family man, my efforts began.

This was my plan:
-Build roof rack to accommodate spare tire and gear.
-Build sliders
-With spare out of the way, build high clearance rear bumper
-Build tube front bumper

With my pregnant wife and baby boy out of town, my work began. My roof rack build can be seen in this thread:

I had already purchased the slider kit from 4xinnovations.com, but didn’t complete them until the day my baby girl was born. This build can be seen in this thread:

After that, things slowed down for a bit. I bought the steel to build my rear bumper based on the concept of Land Speeder’s bumper. The idea was to chop the framerails, replace the crossmember with a burly piece of box steel that utilized an integrated hitch, and make tube bumperettes to cover and protect the rear quarter panels.

However, the best of plans are often met with adversity. On November 28, 2007, my wife was on the way to a chiropractor’s appointment when she lost control of the Cruiser on ice, and ran into a concrete retaining wall. The accident deployed both airbags, bent the framerails, and totaled Graceland One. By the grace of God, neither of our children were with here at the time and she was able to walk away from the accident without injury.

This accident convinced us that another 80 series was a safe and wise decision for us and our family. The aftermath of the accident and the search for a replacement 80 can be found in this thread:

During these Cruiserless days, I had my good friend, mountjoy_99’s SC’d 1997 as a loaner vehicle. With the eventual plan to own a popup camper for the family, I decided that forced induction or a diesel conversion were necessary. I contacted Grease Cruiser who I knew was selling his Cummins converted 80, but alas, he had sold it about one month prior. I also knew that with a family, I would most likely retire before I built my 80 the way I wanted it, I decided that buying, not building as many mods as possible would be a wise choice.

Looking everywhere, I spotted this ad on Christo’s site:

I also found out that Christo was selling the Blueberry, which I had seen when I met Christo on his return trip from CM07 and I was coming back from a family desert trip while stopping for gas in Grand Junction.

After deciding that the best decision for the family was the 80, I worked earnestly with the help of SGT0311 and Christo and convinced my bank to loan me the money for the new 80, and so Graceland Two became the newest member of the family. The thread is here:

So, with just about every mod imaginable already completed, I have been hard pressed to find things to do.

Thus far these are the mods I’ve completed:
-installing my roof rack from Graceland One to Graceland Two (https://forum.ih8mud.com/80-series-tech/196695-got-my-not-old-roof-rack-new-80-a.html)
- installing my Uniden 520 into the asktray location
-installing a LX 450 center console, stereo head unit, with the OEM disc changer, sub, and amp
-installing a cruisercrap.com bottle opener on the Kaymar bumper

I whole-heartedly would like to thank the entire MUD community for being so welcoming and such a wealth of knowledge and help. I believe I have been fortunate to avoid a lot of costly mistakes by taking in what I can here and using others ideas to either mimic or modify to come up with the end result I desire.

There are too many to thank for there help along the way, but I believe you all know who you are. Everytime I’ve reached out for help for a project or problem there has been a quick response, so thanks to all of those that have ever received a PM from me or replied to my posts regardless of how knuckleheaded my questions were.

I also want to say thanks to everyone I had the good fortune of meeting at CM08. It was an amazing event for my whole family. Everyone was so nice and welcoming. Brownbear, treeroot, Matt Farr, Romer, Cruiserdan, Box Rocket, Dirty Toad, and the San Juan guys to name a few. My wife and I are already looking forward to next year.

When I get a chance I will post up some CM08 pics of Graceland Two in action and my mods. 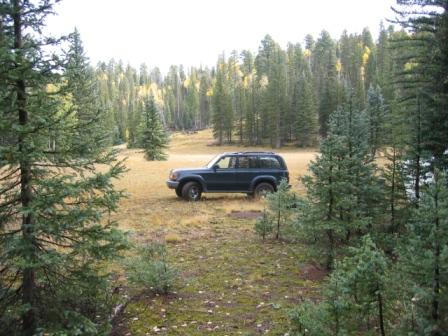 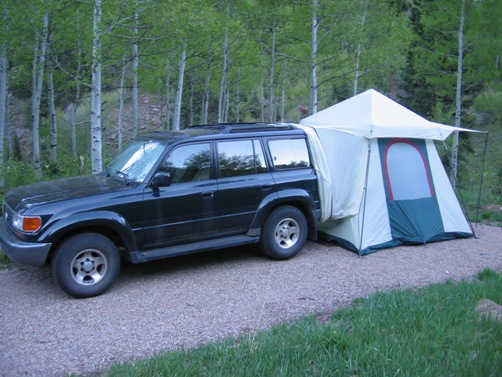 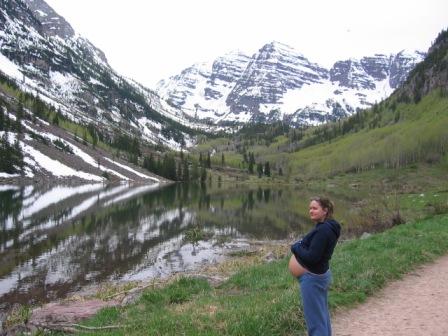 Here I am ready to descend Buttscratcher on Gold Bar Rim 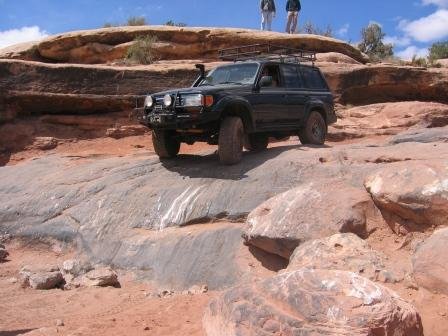 At full stuff on an obstacle on Kane Creek 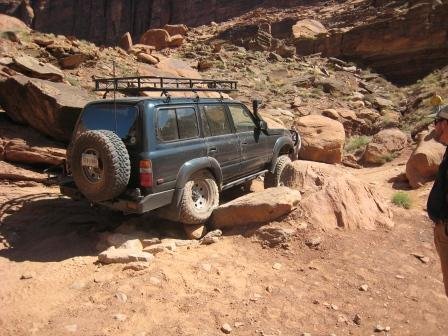 And showing off on the Wedgie on Poison Spider Mesa 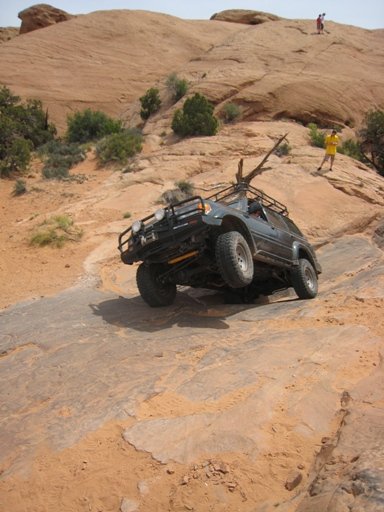 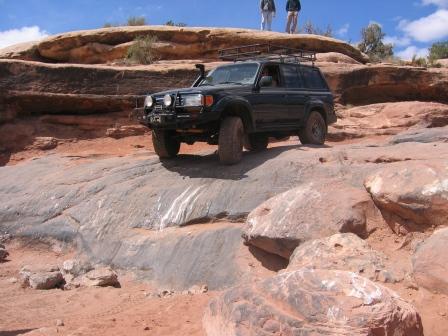 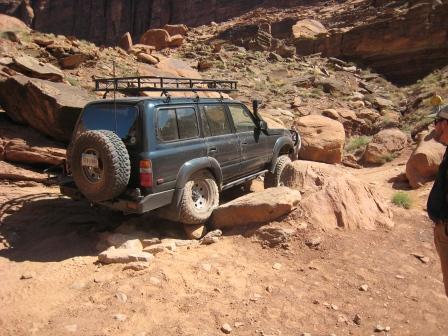 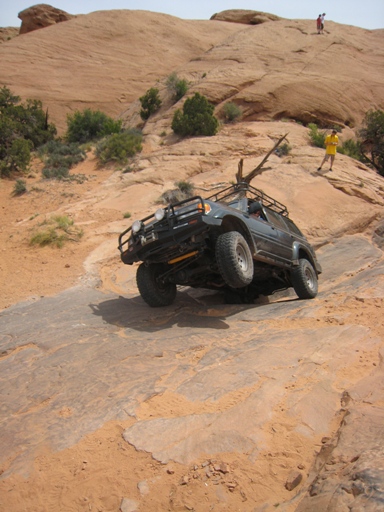 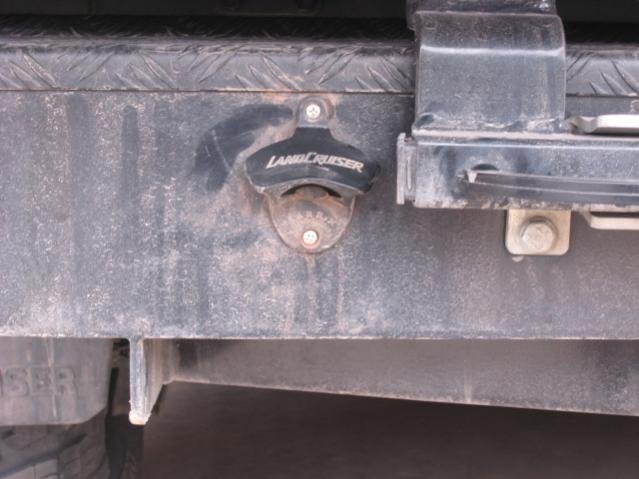 Here you can see the Lexus head unit and the CB. The CB mic clip is located on the PS mounted via the console mounting screw. 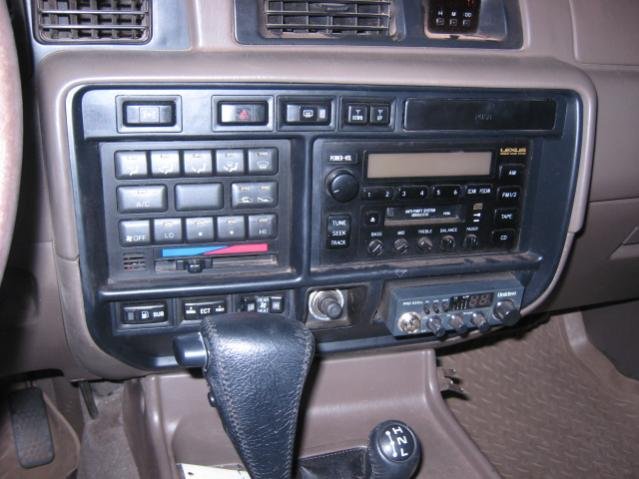 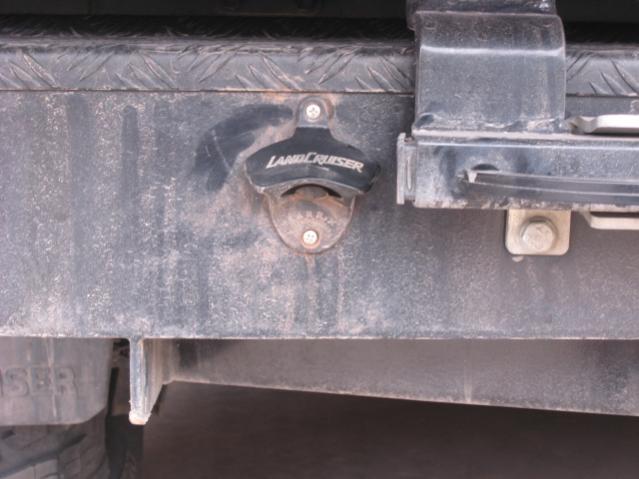 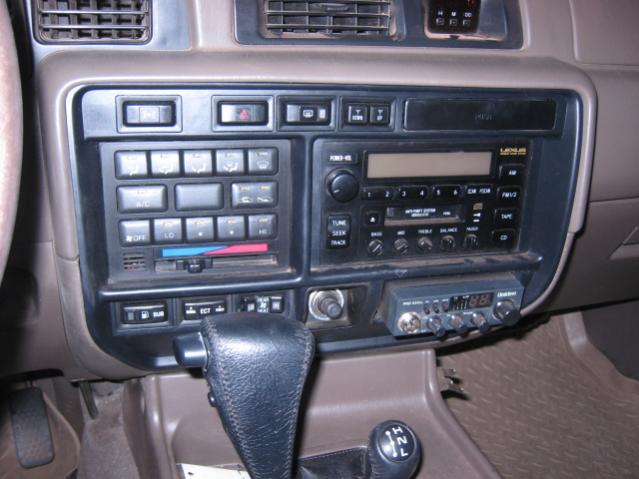 off the concrete retaining walls
"I don't worry so much about animals...or Subarus anymore..."-My

Good looking rig! Great write up too. I actually remember when it was up for sale.

Glad you had a good time in Moab. I was there last year. I kind of passed it up this year so I could run the 20th anniversary Rubithon. I did notice that your line was a little off on Kane Creek though; here's the desired line for that spot: 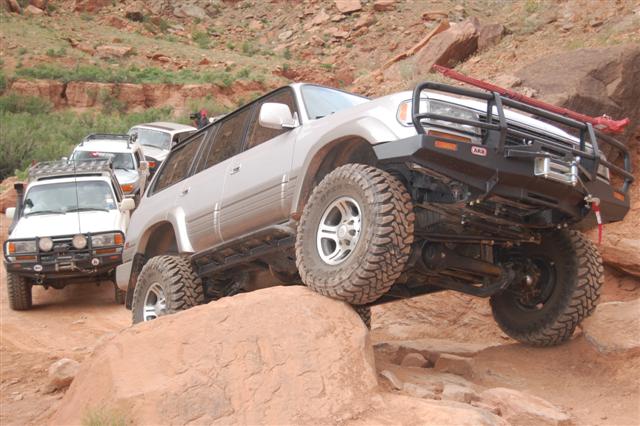 Right you are Steve!

The way I took it I scratched my mudflap...

I need more "thinking like I'm driving an 80" when on narrow trails like that. I'm definitely guilty of wheeling like I'm still in my itty-bitty Frankentruck. Of course 12 years of experience is hard to change overnight...

Thanks for your help on my LX stereo wiring project!
"I don't worry so much about animals...or Subarus anymore..."-My


I can't believe I left you off the CM08 list! It was nice to meet you as well. Are you a daddy x2 yet?!? If not, good luck and I'll keep praying for a smooth delivery.

I also left Vitesse6 off the CM list as well...


I get the pleasure of adding about 200 miles starting in Glenwood Springs. I last did the drive in 04 for our wedding. No $4 gas, no kids, and premium wasn't necessary as I wasn't SC'd...
"I don't worry so much about animals...or Subarus anymore..."-My

Atoyot1031 said:
Right you are Steve!

The way I took it I scratched my mudflap...

619TOY said:
Good looking rig! Great write up too. I actually remember when it was up for sale.
Click to expand...


x2... I remember wondering who it went too, glad to see a fellow mudder have it...

Nice writeup Nick. Nice to meet you in Moab and sorry I didn't get to chat with you longer.

Very well put together and thought out.

As always thanks for contributing.
"If it wasn't a Landcruiser and hadn't been built the way it was you do realize you would be DEAD." VA State Police Officer

Nice roofrack, I may be getting a similar rack very soon.
S

Nice write-up and how much wear do you get out of those MTR's. Bout to buy a pair but heard they wear very quickly??

1hz idle speed and how much should it vary ?

R
Broken Timing Chain Slipper/Guide - Tear it down and replace or leave it?