UPDATE: See most current post, this is no longer a part-out, it's a mostly complete engine! Some details changed below to reflect this.

After a lot of work (and a lot of struggling), I am parting out selling my 1HZ. The history on the engine is fairly well documented in here (Excessively-underpowered-1hz-poor-fuel-economy), but the short of it is as follows.

I bought this engine in a running state but with unknown history. It had a gummed up fuel pump which some hills and lack of EGT gauge caused the piston to chip and break a ring. I rebuilt it and added a turbo while I was at it. Something went wrong with the oil pressure and one of the BEB's shredded and made its way throughout the engine giving it a knock as one of the rods ground away at the crank and the piston scraped away at the cylinder walls. SEE UPDATE. The block was bored to the Toyota manual max so it is probably scored beyond wanting to attempt to use, and given that I can only guess at what caused the failure, I would not recommend running the block. The bearing material also made it's way to the cam and scored both the cam and head. Again, I would not run these unless you know a magic way of repairing (though I'm guessing it's probably cost prohibitive).

A few things to note:

1. I would highly prefer to sell this engine as a package deal so preference will be given to any such offers.
2. Photos of most everything are here.
3. When I bought a replacement engine, I swapped some of the newer parts I had purchased for what was on the 1hd-t I picked up. These should all function the same, just not as new and shiny as the photos of tear down show. Please keep this in mind and pay closer attention to the photos of individual parts.

Here's a general list of what I have available for sale and/or some specific things I should call out:

-Injection pump. Fully rebuilt with a new boost compensator by Diesel Fuel Injection Service in Oregon. If you're going to have a pump rebuilt, these are some of the best guys in the states.
-Injectors and lines. Again, fully rebuilt by Diesel Fuel Injection Service. I will be dropping these off with them again next week to get tested and rebuilt again if necessary.
-Air Conditioning pump, bracket and lines, but no condenser.
-Crankshaft - not from this engine. I picked it up from another mudder who ended up getting a short block and didn't need it.
-Choice of 6 1HZ connecting rods or 5 good and 1 bad 1HD-T rods. The 1HZ rods were pulled from the original engine when I rebuilt it with 1hd-t rods even though the original rods checked out good at the machine shop.
-Choice of 1HD-T or 1HZ Crossover pipe or 1HZ.
-Choice of Exhaust manifold - 1hz and 1hd-t
-CT26 turbo from the 1hd-t I purchased. Sorry, I had the Grunter rebuilt and I'm keeping it. I also have all of the various fittings that came with the Gturbo that make it easy to plumb a 1hz for a turbo. I don't have a photo of the CT26 yet because I just got my grunter back and will be swapping it this weekend.
-Steering pump, vacuum pump, oil cooler, fan, alternator, front and back timing cover plates, gears, and lots of miscellaneous ancillary parts. Just see the pictures.

A couple more side notes I should mention is-- a crank pulley is not included, and while there are a lot of miscellaneous nuts and bolts, some were damaged in removal or I needed them so expect to pick up a few things if you're rebuilding.

Considering my location (Portland, Oregon), the Injection pump, injectors, turbo and the fact that it's mostly complete engine minus the cam and a few ancillaries, I'm asking $3200 for everything plus actual shipping. 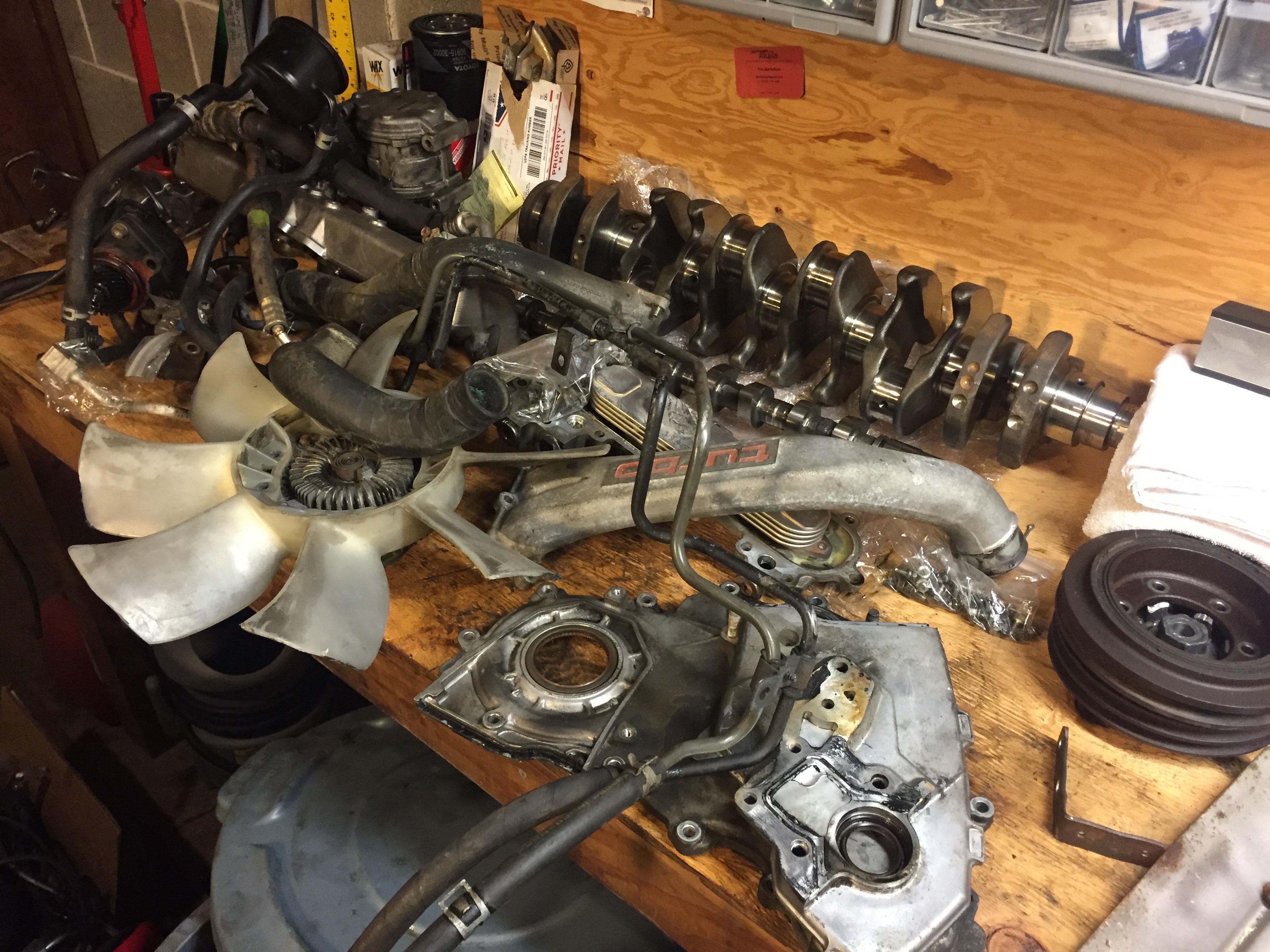 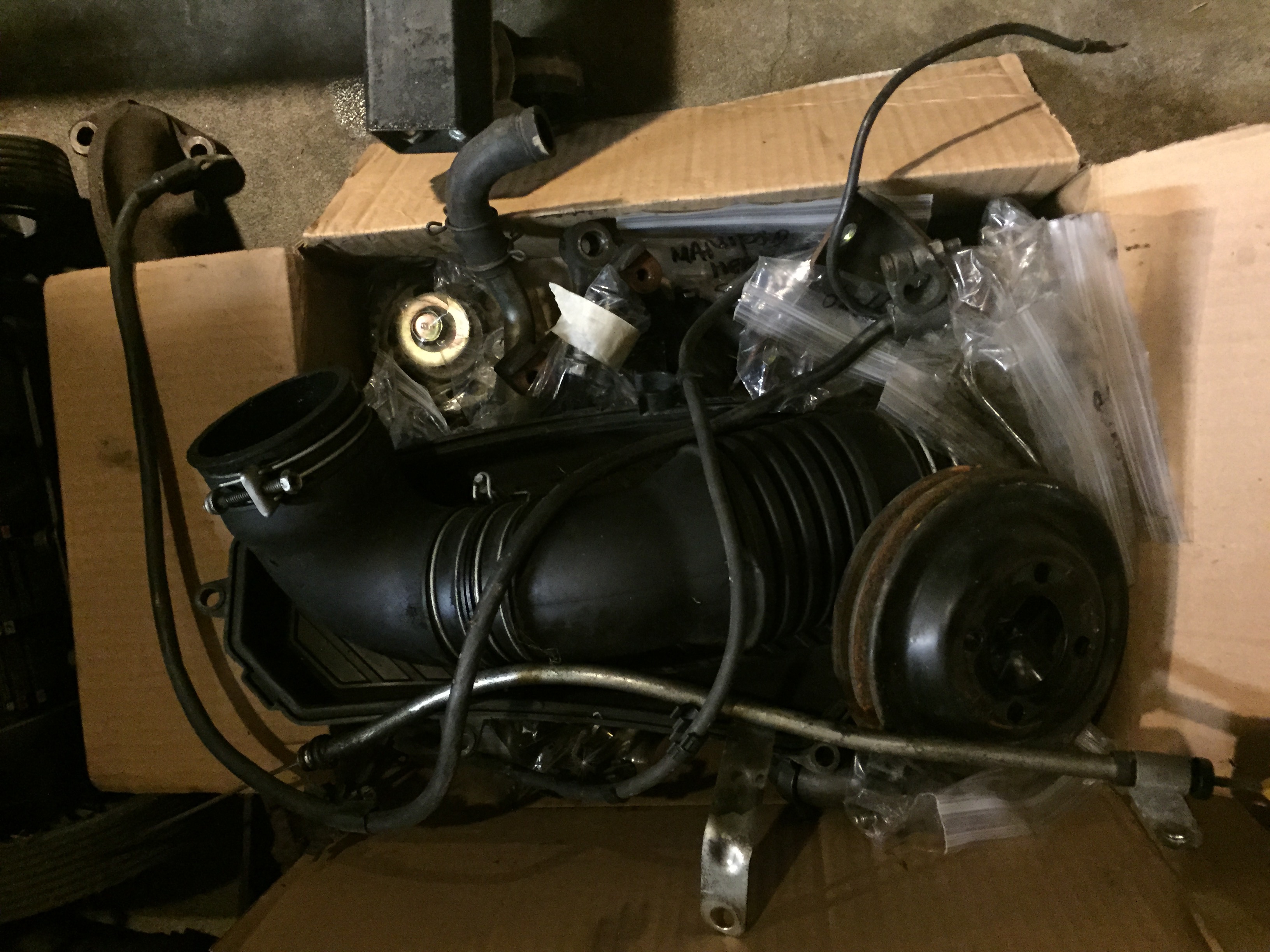 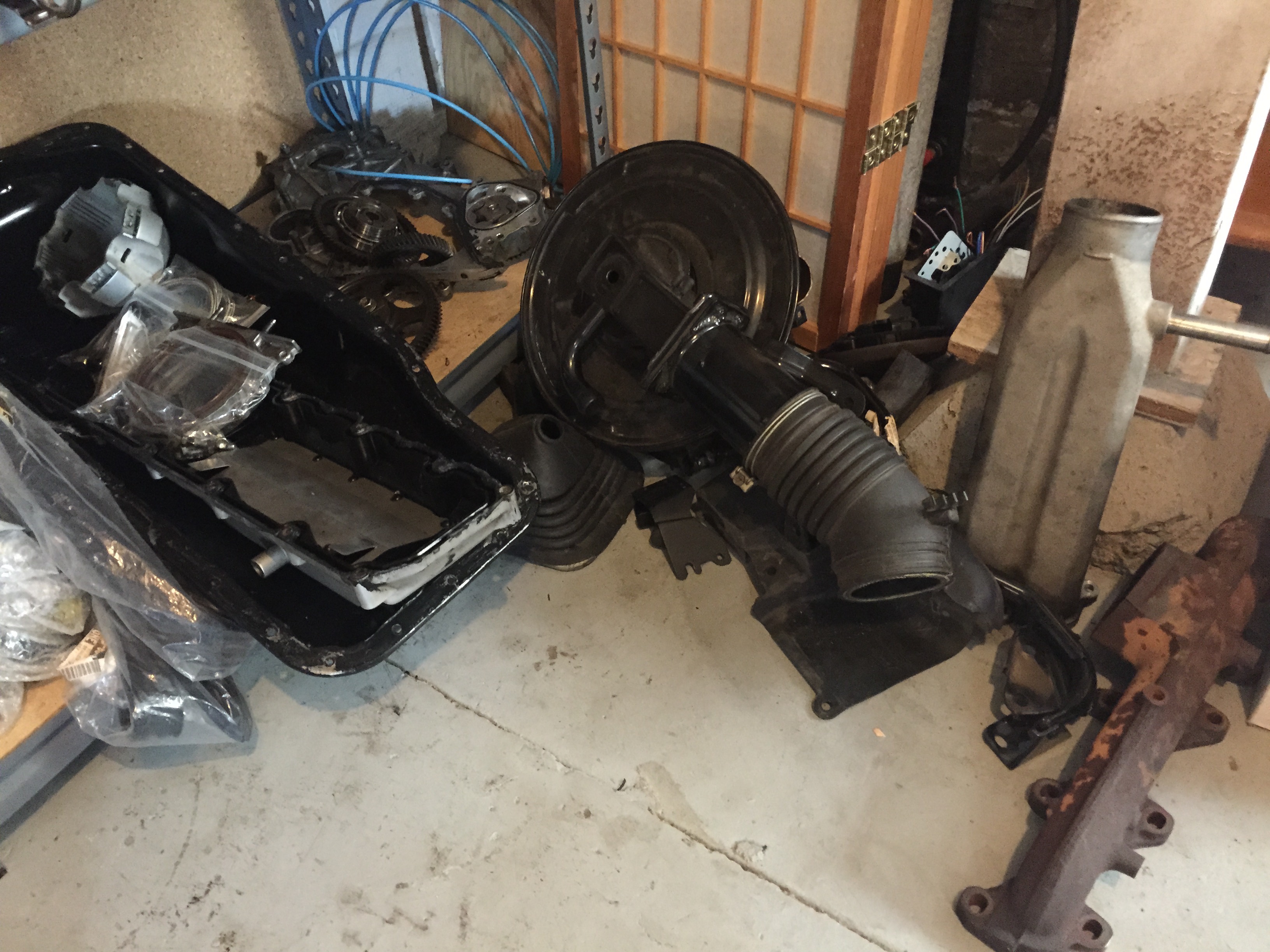 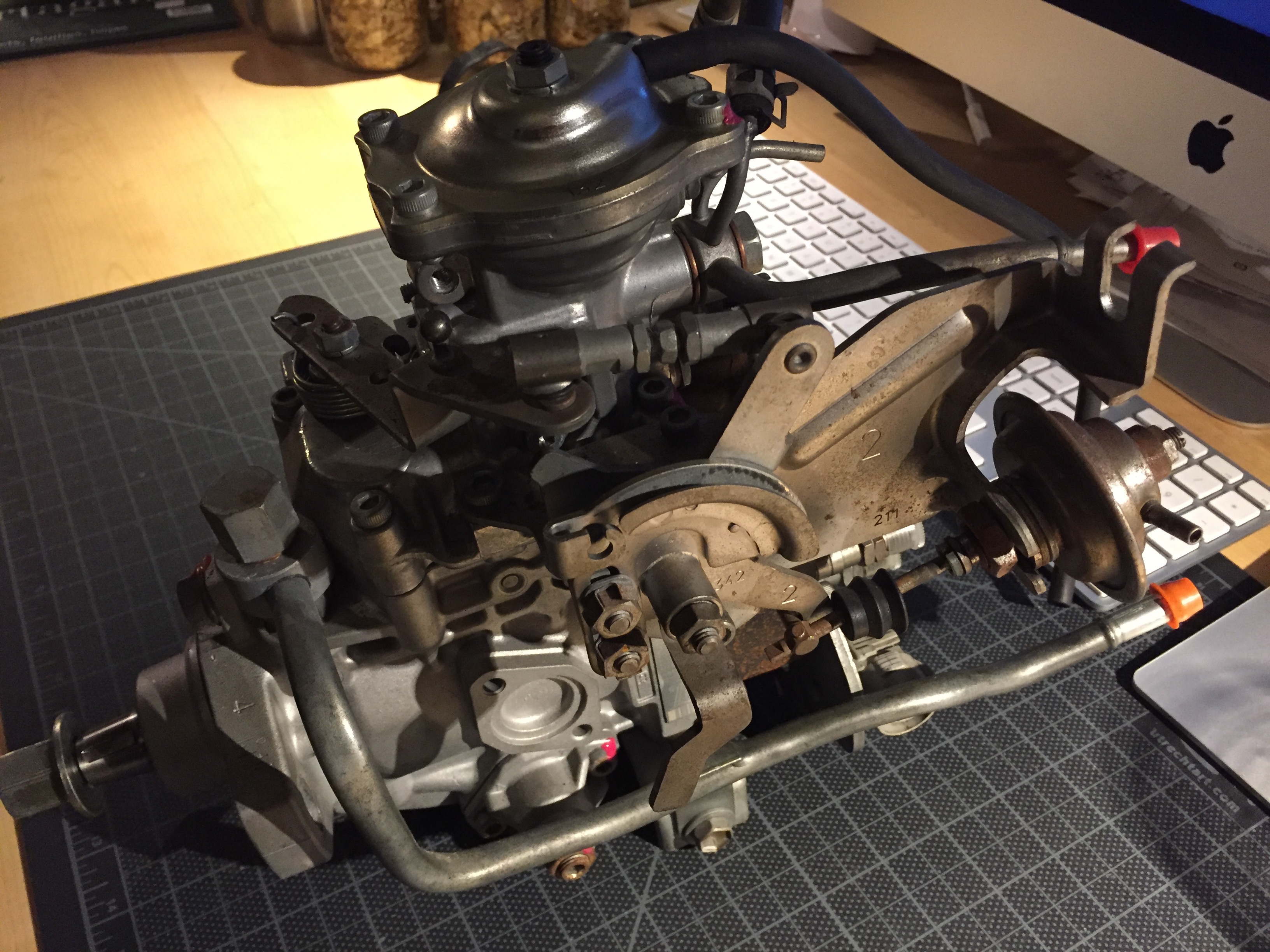 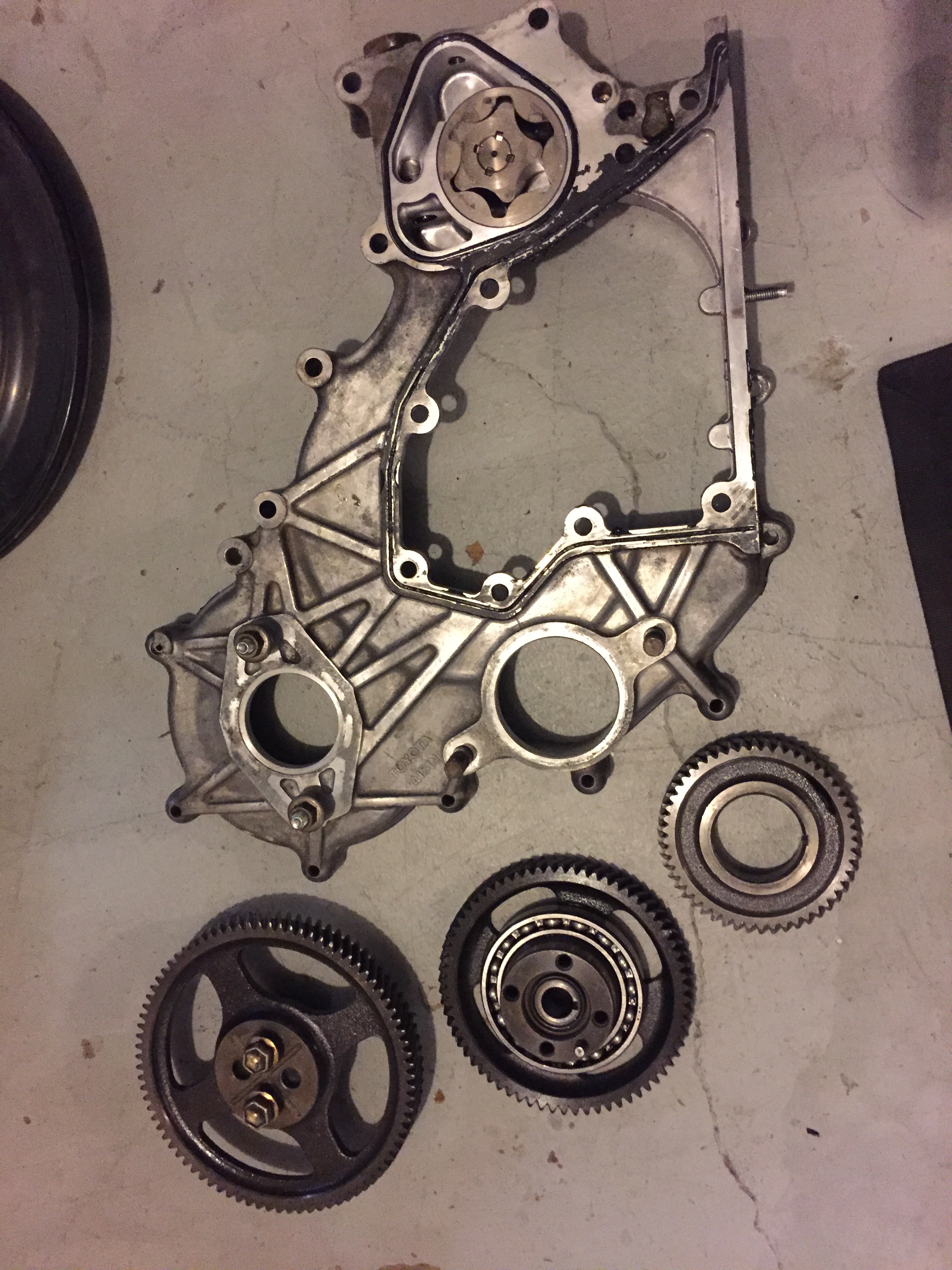 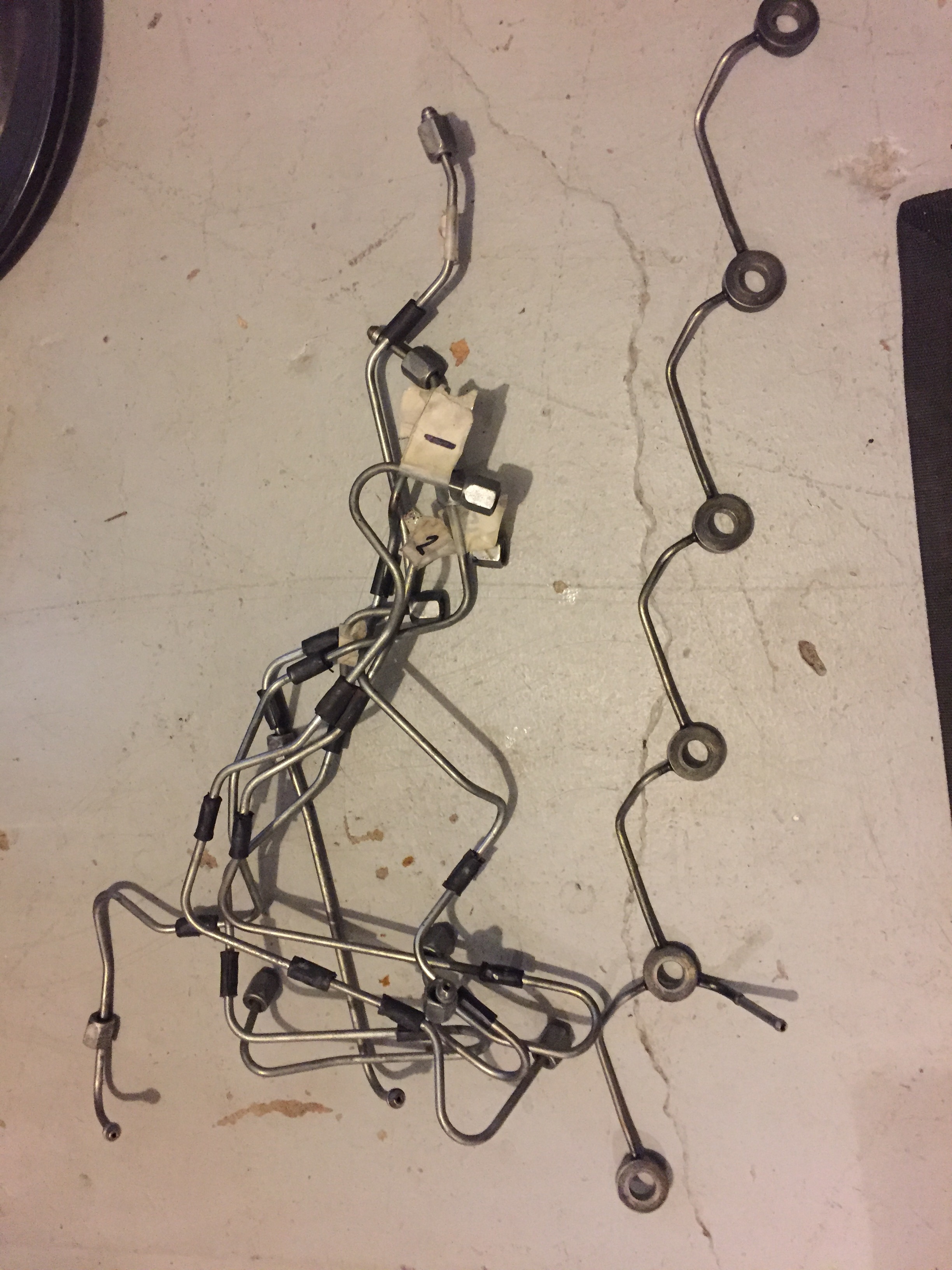 Interested in IP and AC bits, if it parts to that point.

Delancy said:
Interested in IP and AC bits, if it parts to that point.
Click to expand...


Can I put myself 2nd in line for the same?


I understand if you are able to avoid parting it.

Multiple requests for various parts recognized (though mostly all wanting the IP). Just wanted to clarify that I'm going to continue to tread water for a bit still in the hopes that someone has a mine engine they want to redo with better parts, or something to that effect. Thanks for the interest this far, I'm paying attention to the requests!

Price drop-- would still love to move this as a whole. Willing to bring the block and head by the machinist to see if it's salvageable.

Price adjustment because I may be leaving the country within the next couple months for an extended period of time and really don't want to store all of this.

Crazy news. Before the holidays I decided to bring the block, head, cam, pistons and crank by my machinist just to do a little due diligence (and really, I should've done this right away, but let's not get into that right now ). He honed the block and checked it for spec, honed the head journals and the inspected everything else. The result was totally unexpected. The block is perfect and ready to get built back up and the head is not 100% perfect, but he says it is totally fine to run and he would if it were him. Full disclosure, it does have a couple of oil grooves but nothing that would significantly affect oil pressure. I haven't picked it up from him yet so no pictures until I do.

So at this point, I am now selling a 90-95% complete, rebuildable engine, not the parts (pause for dramatic effect).

It needs a cam still and there are decisions about con rods to be made (I have 5 good and 1 bad 1HD-T rods or 6 good 1HZ rods to choose from). The best part is beyond assembling pistons and setting piston height, whoever wants to pick this up has little to no machine work remaining to be done. Price needs to be adjusted to reflect this new info, but I'm wondering if I should re-list as a complete engine and not a part-out. Thoughts? If interested in the whole package, feel free to send me a PM.

I need a 1HZ/1HD Crankshaft and a 1HD conrod for my 1HD-T (spun the #5 bearing). Let me know if you decide you'd like to sell your crank and a rod! I need them ASAP.

zipdoa said:
I need a 1HZ/1HD Crankshaft and a 1HD conrod for my 1HD-T (spun the #5 bearing). Let me know if you decide you'd like to sell your crank and a rod! I need them ASAP.
Click to expand...


Hey, so with the news that the block is good and there isn't much needed to put this back together as a running engine, I'm not going to part it out at this point. If no one wants it as a whole project, I'm just going to store it while we're out of country for a couple years and put it together again for a future project (probably a 60 series!). Best of luck!

You don't need the turbo or the AC to put it back a running engine and proceeds could help pay for storage.

One last shout out before it goes into storage for a few years if anyone wants to put this engine back together. If no one is interested, I'll reassemble myself in a few years (with a lot more learnings under my belt) and would rather not part out any of it's bits that i'll just have to replace later (Sorry Delancy!).

Hello there do you still have the engine disassembled ? i know is too late for asking but would like to know no matter the condition

Angelo Rizzo said:
Hello there do you still have the engine disassembled ? i know is too late for asking but would like to know no matter the condition
Click to expand...


Sure it's still disassembled, but it's now in storage on the other side of the world from me- so that's where it will remain for a while.

It seems that the Euro life suits us and we are probably staying for a good deal longer than we originally thought so I would like to try to empty my storage unit when I am back in the states the first week of June. This of course means getting rid of this project! I would still greatly prefer to sell all of this together as I really won’t have the time to part it out and mail bits. So if it doesn’t go all together then it probably stays in storage for another year and I’ll try again. And of course a local pickup would be much preferred considering the weight of everything.

So what’s the price on this pile of 1HZ parts?
D

you dont need to assemble the engine ,if we agree it can be just placed on a wooden box and sealed.
thanks
Angelo
You must log in or register to reply here.

Tuesday at 6:02 AM
cruisingalong
C