My last build was pretty unique. If I had to do it all over again, I would have done pretty much everything the same. I loved the way it looked and operated. I enjoyed the challenge of making things work that didn't really want to. But the weird thing is I get asked all the time if I miss it, and I really don't. I thought I would, right up till the time I loaded it onto the shipping trailer, but once it was gone, I had a sense of relief that I didn't have to worry about it anymore. I made it much nicer than I originally intended, and for that reason, I didn't use it for what I originally wanted.

My #1 goal for UZJ40 was to make it a good highway/road trip vehicle. On our drive home from Cruise Moab last spring, I realized it would never be what I wanted out of an adventure rig. I had a blast in Moab, but on the drive home (I-15, speed limit 75), I knew the short wheel base, lifted, leaf sprung vehicle was on it's last road trip with me driving it. I had put 12,000 miles on it... taken it to CA, ID, UT, CO, AZ, and NM. All of the creature comforts I added to the 42 year old vehicle wouldn't change it's road handling characteristics. I do feel like it drove and rode better than most 40's out there, but at this point, I'd rather drive our 5th gen 4Runner on road trips and enjoy the trip for what it is, rather than having to focus so much on driving the vehicle.

One of the biggest factors that changed my mind was also the purchase of a $600 mini truck. I bought it from a co worker, not running. I rebuilt the engine within a week and drove the hell out of it. I immediately turned it into a fun desert truck. I threw 35's on it, took the bed off, and have had more fun with it in the last 6 months than I've ever had with any other vehicle. Why? Because it was $600, and with that number in the back of your mind while you're bouncing around through the desert, you can have as much fun as you want with zero worry about anything else.

Knowing I was retiring UZJ40 from road trip duty, I had to decide what to do with it. It was too expensive of a vehicle to only drive around town once in a while, and it was too nice to beat it up in the desert. It was time to sell it.

As much as I've enjoyed not having a project vehicle the past few months, I now have the opportunity to build something unique and more along the lines of what I will ultimately use the vehicle for this time. It won't be anything like the last one, but it will still be different and unique.

Here are two teaser pics take over the last 2 weeks.... I will update this thread throughout the build, unlike my last one when I waited till it was running and almost complete. 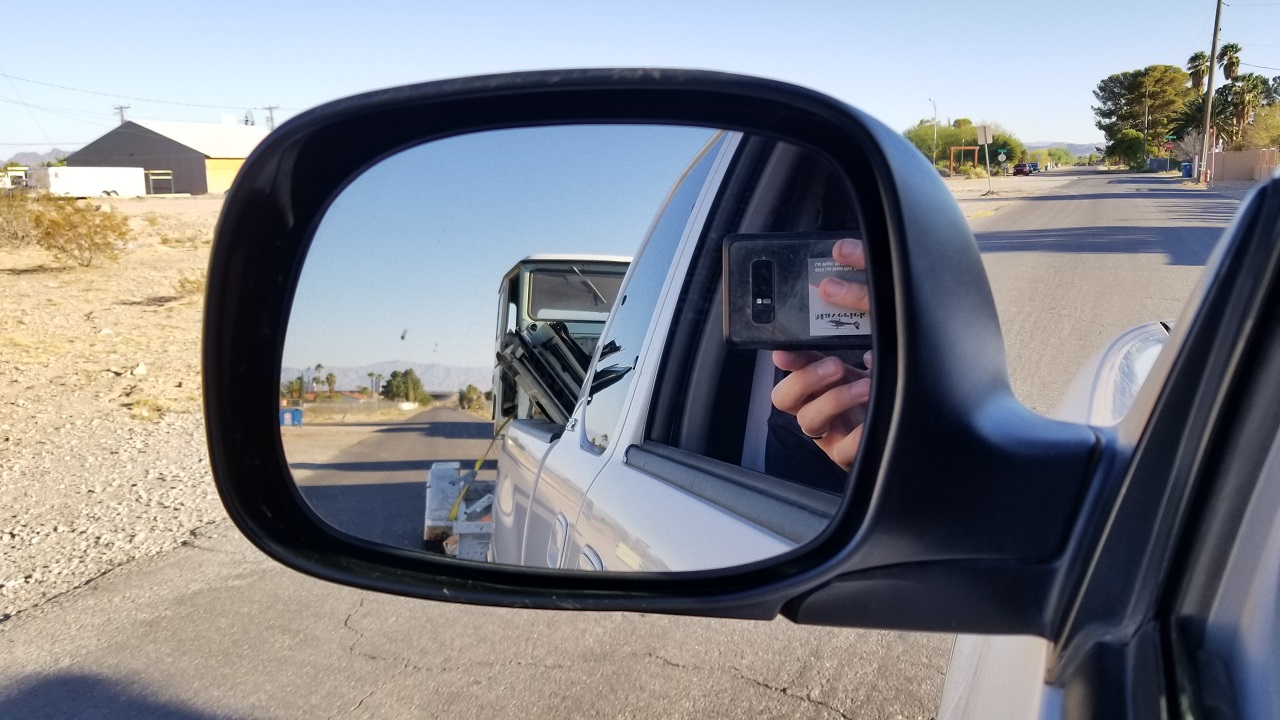 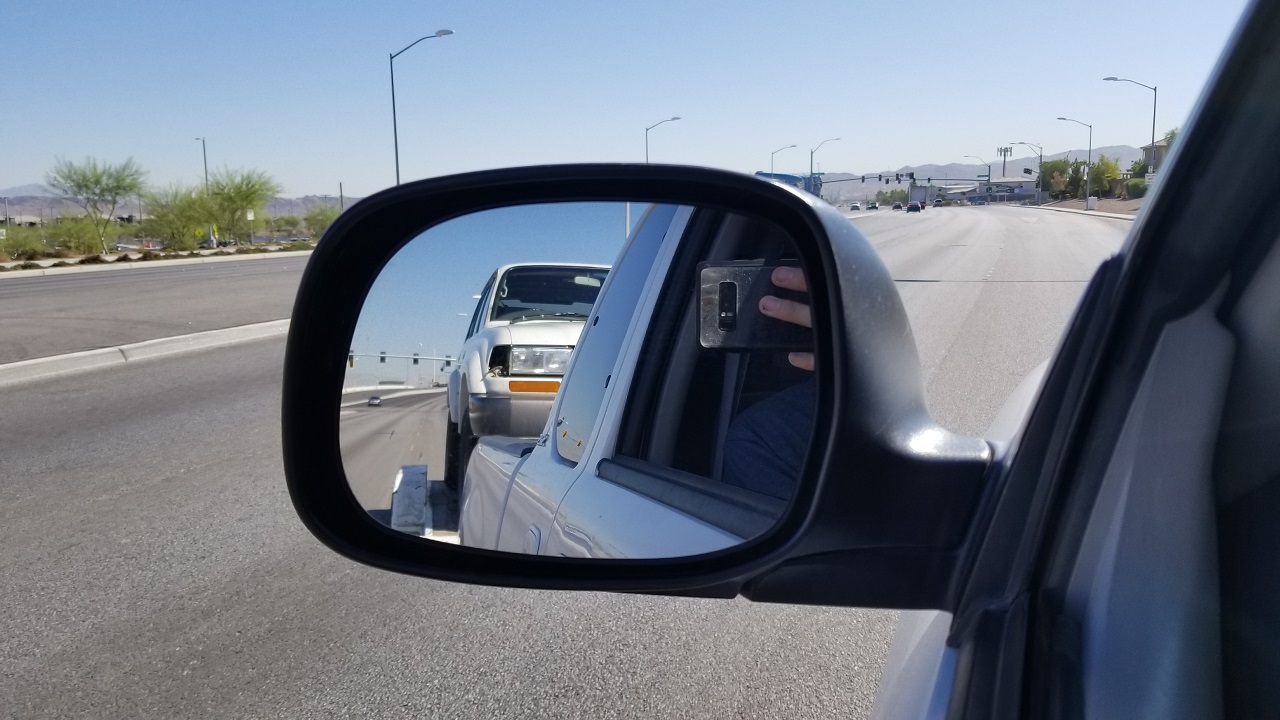 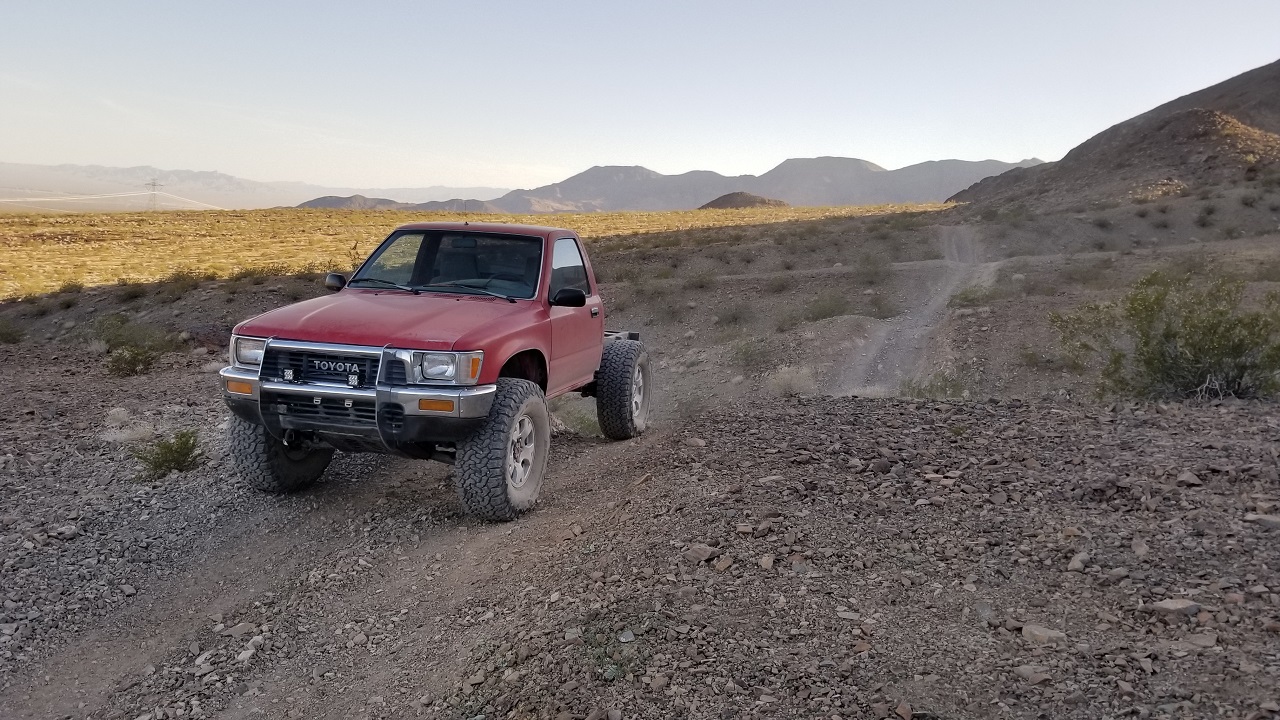 My wife's DD, being converted to our camping and off road exploration vehicle- 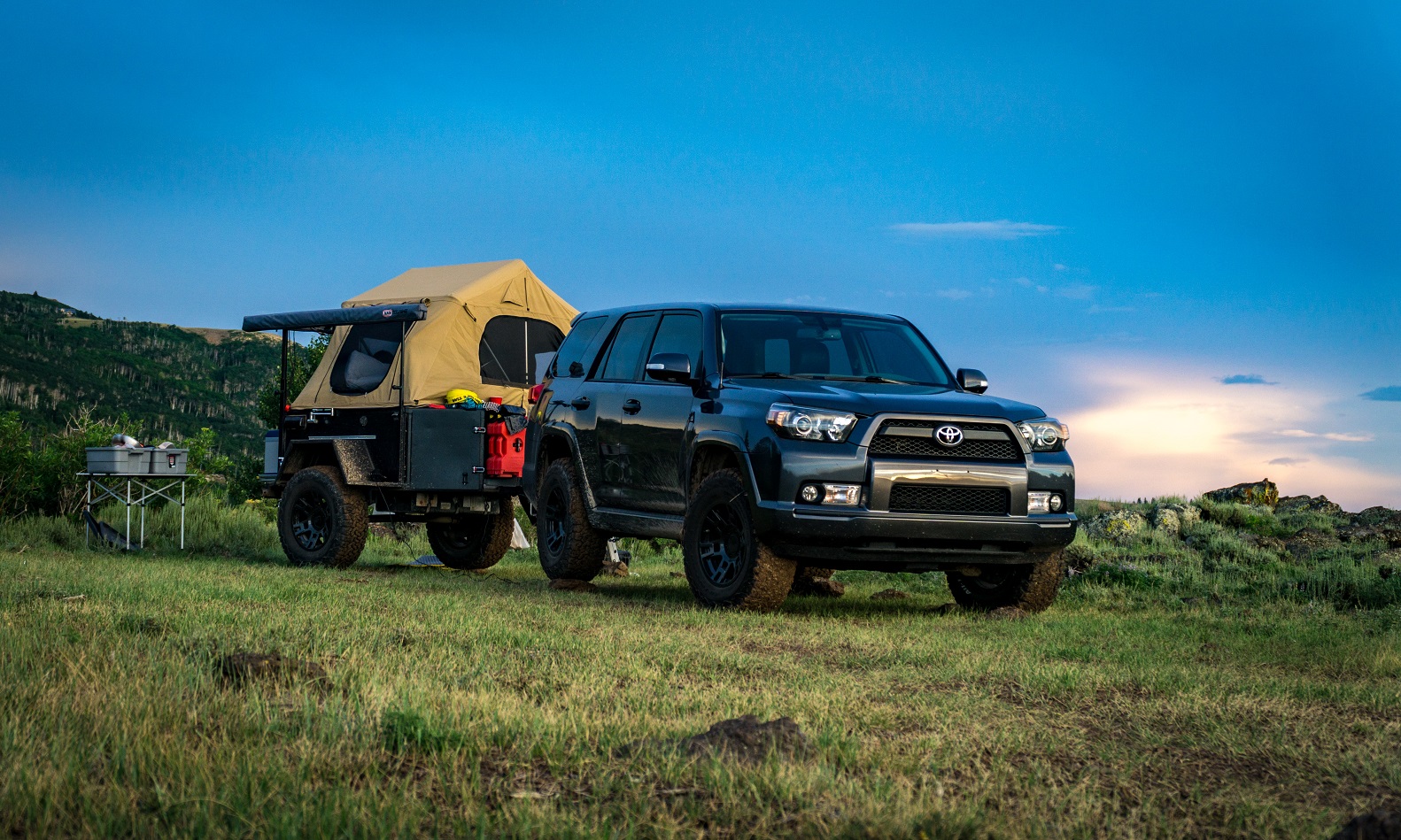 Subscribed. I admit to seeing your classifieds and doing some cyber stalking to figure out where you were headed. Looking forward to the build.
'79 FJ40
- Body work - fixing my '79 floors and other stuff

Also looking forward to what is next Riley. Darlene and I often take her 4Runner when longer Highway miles are involved. I totally understand that. Did a run thru Bradshaw Mtns to an old mining town last weekend in the 40, but 50 of those 62 miles were on dirt and that is where my almost completely stock 40 shines. No plans to get rid of my 40, but my next vehicle purchase will be a 4Runner.
Copper State Cruisers #407
1978 FJ40; 2-3 inch Dave Gore Shackle Reversal Lift. Full size 5'X7' Confer Rack. 4Plus Products Front Bumper and rear swing out carrier. CCOT rear fold up bestop bench seat. Mostly stock besides that.
2001 Toyota Tundra SR5

so.... is this a 40 build? or are you selling the 40 and building something else? I'm a little confused by the OPs description ....
I'd say my love affair with Land Cruisers is healthy..... right?

cruiserboy14 said:
so.... is this a 40 build? or are you selling the 40 and building something else? I'm a little confused by the OPs description ....
Click to expand...


Riley’s UZJ40 belongs to another.

Don’t forget to “report” this thread and ask the mods to apply the “Build” button to it.

Just a tip, from your buddy Dan.

jim land said:
Look like it will be a 40 series body on an 80 frame and drivetrain
Click to expand...


This is pretty accurate. The 40 I bought came as a non-roller, but it had the frame. I didn't want to design a link suspension, front and rear, from scratch. I wanted to use a factory setup. I thought about using a 4Runner frame and suspension, but it didn't seem heavy duty enough. I also spent so much time figuring out engine placement, oil pan clearances, etc on the last setup that I really didn't want to do it again.

My good friend in Vegas came across an 80 series with extremely high mileage, non-locked, and blown headgasket. It also had some very interesting body work/repairs. We decided we'd part it out and use the frame and drivetrain for this project. 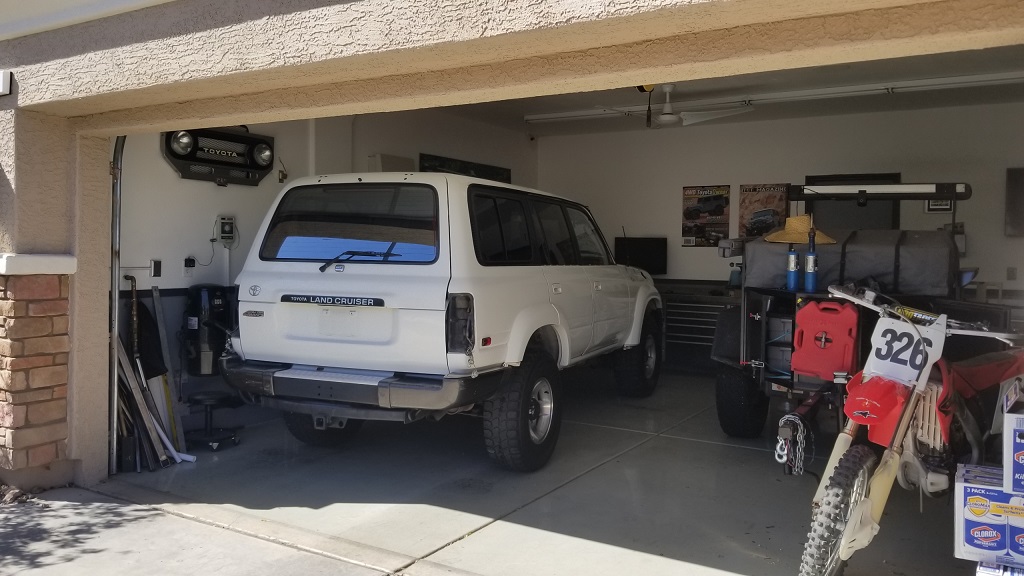 Since I don't have a lift in the garage, the only way I could get the body off the frame easily was to section it into lighter sections. I took all of the body panels off and stripped the interior. Then I went to town with the Sawzall. 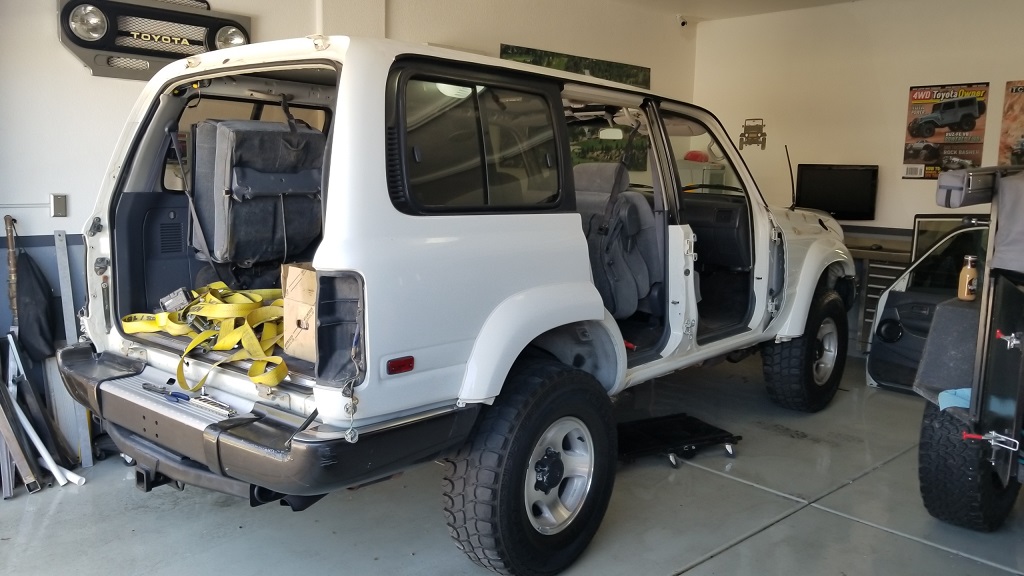 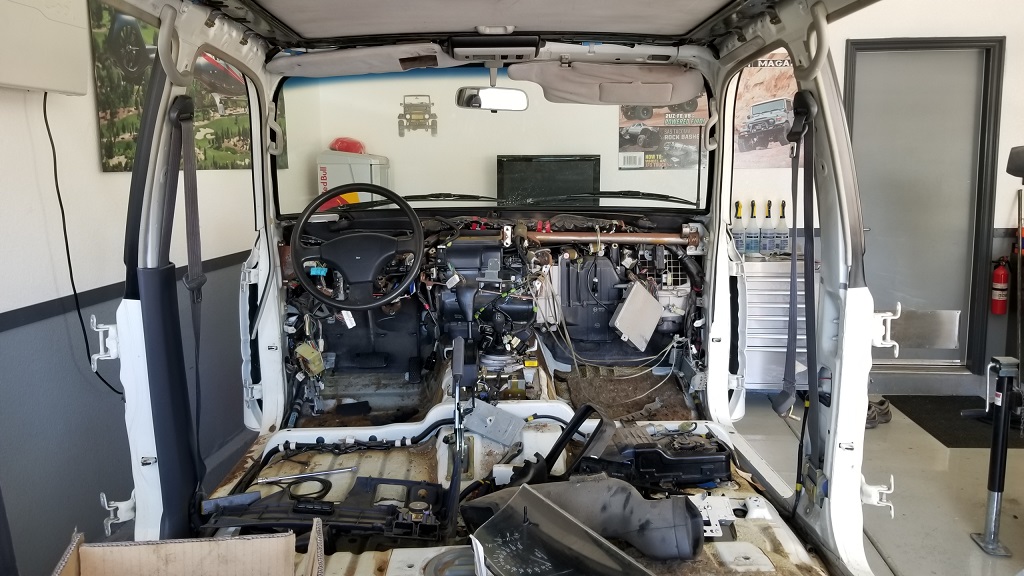 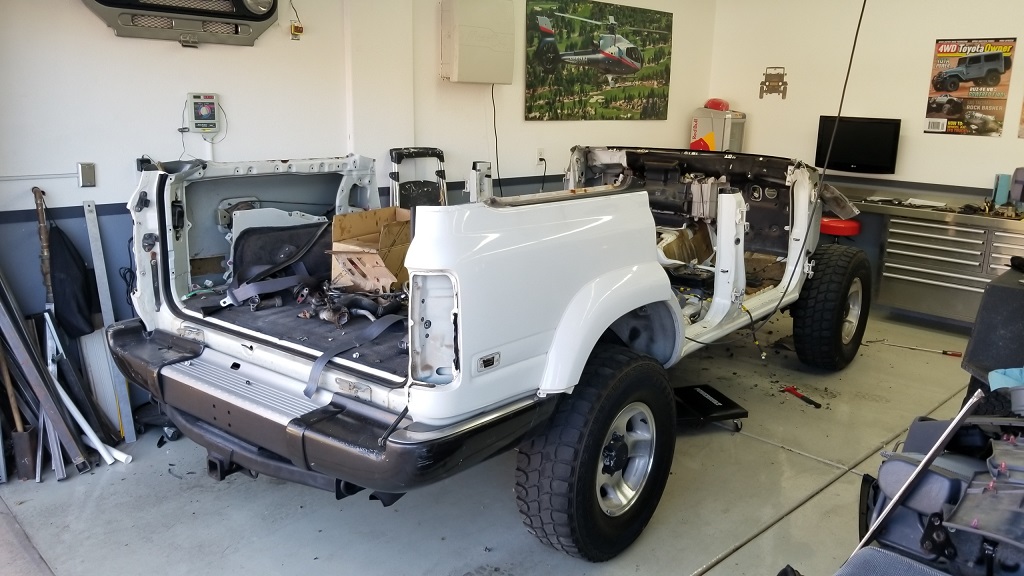 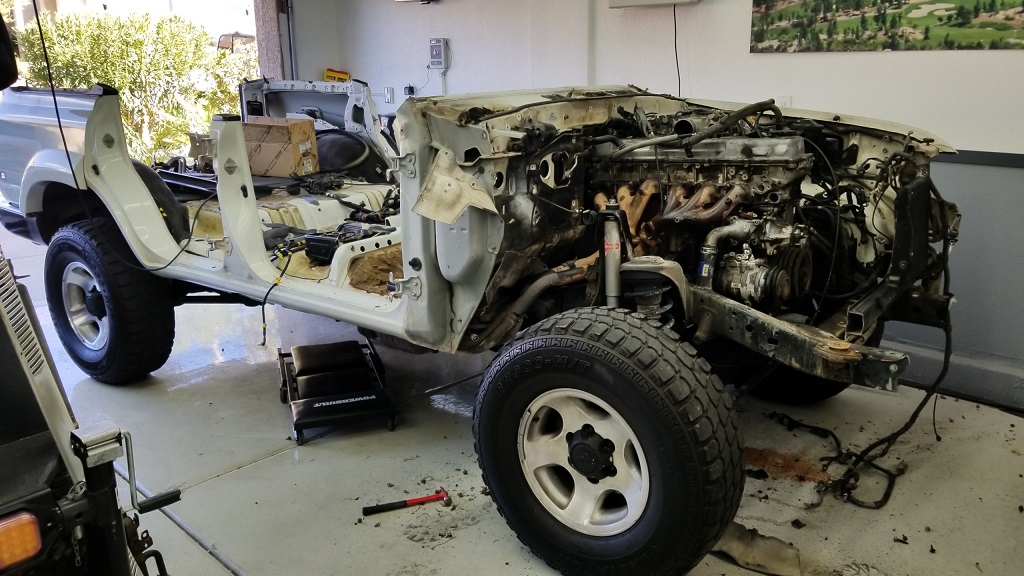 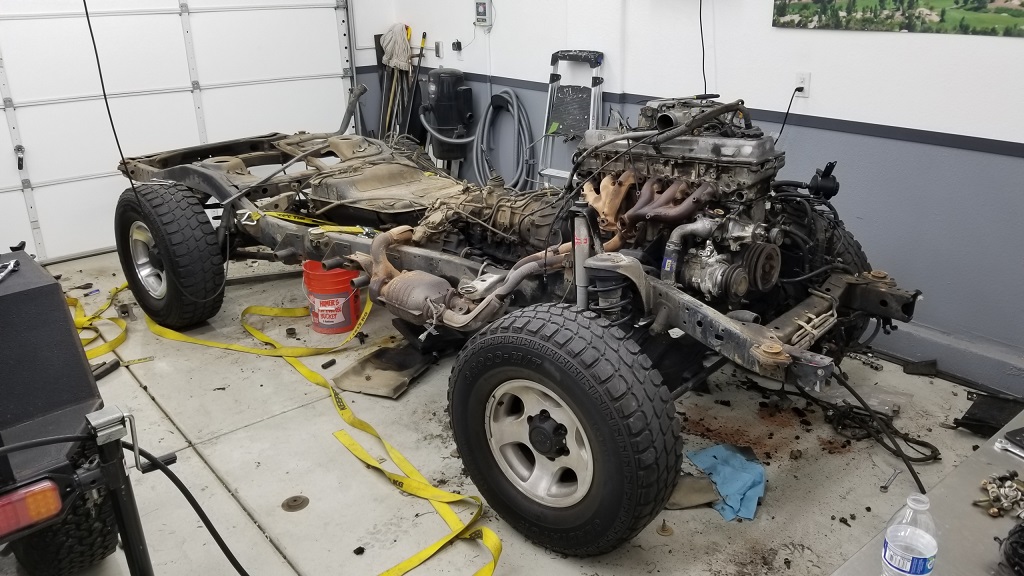 After getting everything stripped, I spent about 2 hours pressure washing everything with hot water. It really cleaned up well and now I'm much more motivated to get to work on it. 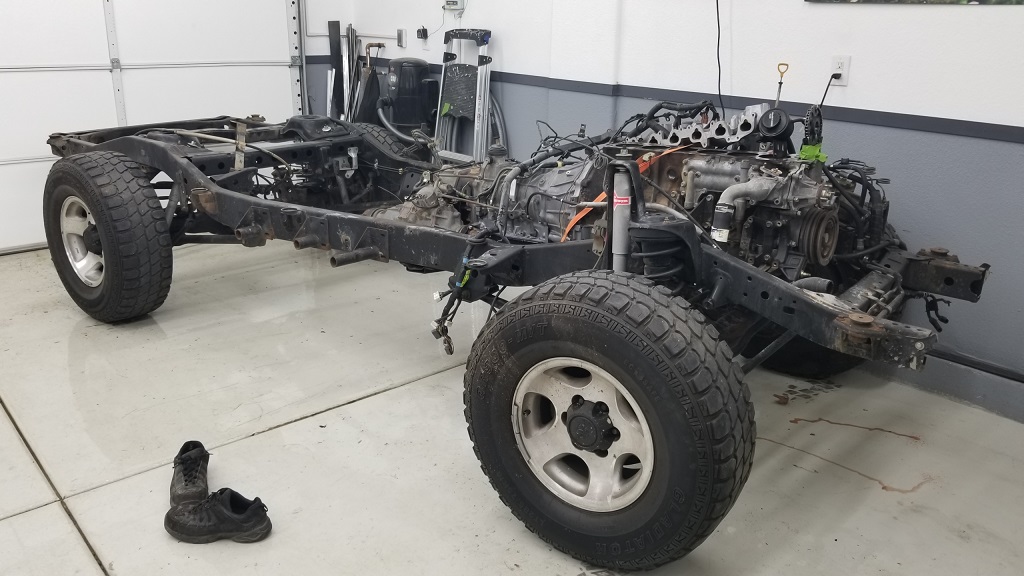 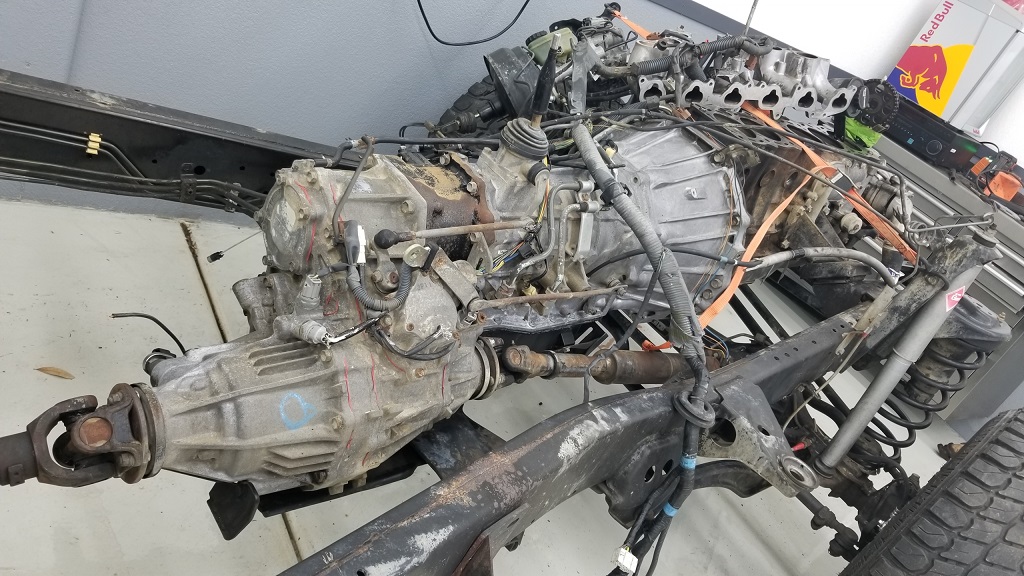 this is a cool build , take special care of front axle vs body placement
my "new" 1984 bj42 Miss dirty blue
You must log in or register to reply here.

Resurrection of a pair of 78s