My long, slow, and possibly painful journey towards a GTurbo.... (1 Viewer)

G'day guys,
I thought I would start this thread to have one place to put all my questions regarding my intentions of eventually ending up with a GTurbo in my 88 HJ61. I have been following the threads on here re: Turbos, GTurbo, etc, and have decided that with my limited turbo knowledge this is the way to go instead of the Mumba etc route.....

My intention was to buy an Ebay front mount intercooler and pipe-work, parts to make a 3" exhaust, a Turbosmart Boost T, and then increase the boost to about 12psi to see how it goes for a few months, then get the GTurbo... however......

I rang Graeme earlier this week to get his opinion if the engine at 483000 k's would be suitable for a GTurbo, what intercooler size he would recommend to be the best, etc.... Graeme immediately stopped me and asked if I had replaced the pistons due to the factory fault with them causing the top ring to eventually break (unfortunately I had never heard of this problem before and thought the engine would be good for a million k's.....)

I rang around, but no one is keen to do anything other than a full engine re-build for $8 - $9000, which I simply cant afford.... I purchased the car at 460000k's, and looking at the sealant on the sump, at some stage the sump has been off as it doesnt look like how Toyota would have done it, so it may already have Alfin pistons in it.....

So, my first questions are:

If I take off the sump, is there any way I can tell if the pistons are genuine Toyota, or Alfin, by looking up at them from underneath??

Will looking up at the bore from underneath give me any clues re the condition of the pistons / rings - ie - does the rear in the top ring groove slowly start causing marks on the bore, or is it the sort of thing that is fine one day, and lets go the next???

Now my intention is to get the engine reliable (or at least me feeling that it is reliable), and then saving up for the GTurbo. If there is no way of telling if the pistons are Alfin from the sump, I will order an engine re-build kit (about $1200) and take the head and sump off, replace the pistons, rings, and big ends, possibly get the head reconditioned (another $1200)..... There goes my $2500 for the GTurbo..... Short of pulling the engine out and fully rebuilding it, is there anything else I should look at???

Sorry for the long winded post, but want to give as much info as possible....

Thanks heaps for any info!!
Drew

I never had the pleasure to own an 12H-T but I would, would like to rebuild it as best of my possibility and then upgrades ..

I'd fit the exhaust and intercooler and touch nothing else. I also wouldn't be doing anything internally unless I could go the whole hog and do the lot. Without an accurate history of the engine you just won't know enough to be confidently screwing boost and fuel into it. It also reads like you rely upon this vehicle and aren't in a position to be spending money on it like some of the toys people own, which means looking after what you have.
It reads like you have a good engine with great fuel economy that should last quite a few more years if well cared for.

Yep at 483,000 kms Graeme is playing it safe which is good to see instead of just taking your business and you maybe end up having a blown engine. Unfortunately the piston ring wear needs to be checked at those kms. It's a high stakes risk I would intercool 3 inch exhaust and raise boost(I have with no probs for years) to 11-12 psi and you will notice a nice increase in performance and when your engine finally needs a recon go down the gturbo path.

Ps I got a good quality turbo smart manual boost controller as the cheap ones can come loose on adjustment on corrugations which can be bad...

I would do a compression test to see the health your engine first.

x2 on the compression test. im running 3" exhaust and a tad more pressure and slight fuel increase. its got 567 000 km on it, still strong.

Thanks for the input everyone - even reading the k's some of you have on your 12ht's gives me more confidence in my engine! If there is no way of telling if the pistons are Alfin from looking up from underneath I will probably go back to the intercooler/exhaust idea and leave it at that for a bit...
@absolom - perfect case of how little I know about turbos - I can't even spell mamba correctly...... 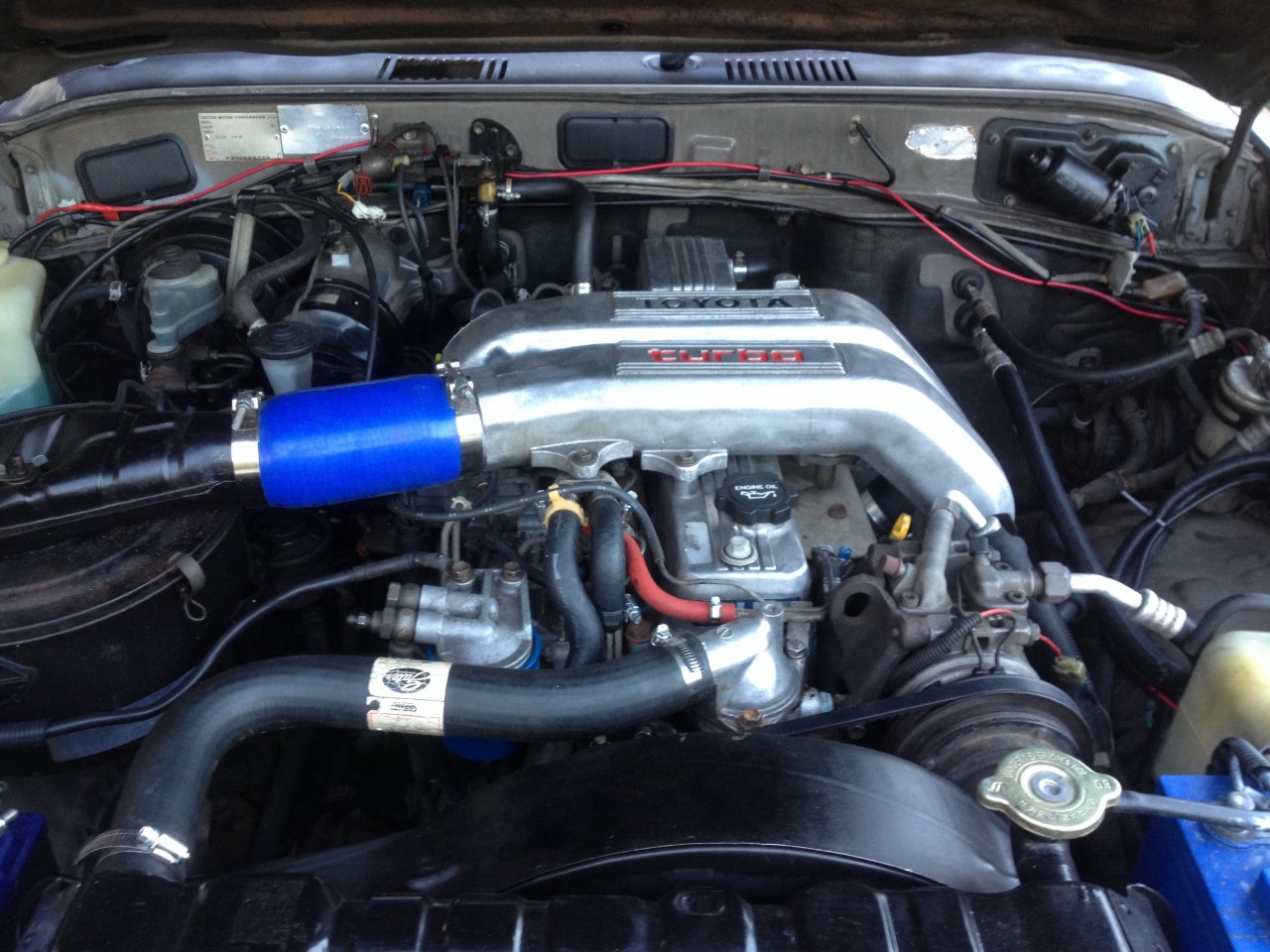 So, I checked prices on exhausts today - most places want about $1000AU for a 3inch one... I can get the following:
3" donut $65
Sets of flanges inc gaskets and nuts/bolts $30 per set
Flex pipe $30
6.5m of 3" aluminised mild steel exhaust pipe $108 (hopefully I will be able to sell a couple of meters when done).
What are people's opinions on mufflers - straight through, offset Inlet / outlet, or none?
I also gave the engine a clean today, my new brakes arrived, and my starter motor started playing games (click, click, then start....)

For that price, do it yourself if you can.
I vote for straight pipe.
Clean engine bay btw.

x2 on the straight pipe

Doesn't straight through pipes without muffler drone on hwy ??

It's never bothered me with a straight 6, both a 2H turbo and now a 1HD-T, with the exhaust coming out the rear in the factory location on bot. I've found a 4 cylinder a bit droney on highway though, no idea why the difference.
P

Go the home made system, I made mine for less than $80, dump pipe and all. Mind you I managed to acquire some "take-off" pipes to use for bends and yes, I even chucked in a muffler, which won't be there much longer. New system to be built in the coming weeks when I decide on turbo upgrade. Not lucky enough to have a 12HT, love the 2H though.

Only until the wastegate opens. Then it's horrendous. Any towing or hill climbing on max boost becomes awful.

Dougal said:
Only until the wastegate opens. Then it's horrendous. Any towing or hill climbing on max boost becomes awful.
Click to expand...

Hmm? I have wastegate blocked, tire noise (KM2) on hwy is much louder than exhaust, even on steep hills. I have never towed anything with HJ though. And yes, i know it makes huge difference when towing anything heavy, i have "big rig" experience.

Thanks guys for the input / comments! It might be a month or more before I get stuck into the exhaust, but will post photos when it happens. I have to do the knuckles, fit new rotors and drums etc which are probably more pressing issues.... It also gives me more time to find hopefully free bits (flanges / flex pipe etc)
Drew
D

HoJo 61 said:
Hmm? I have wastegate blocked, tire noise (KM2) on hwy is much louder than exhaust, even on steep hills. I have never towed anything with HJ though. And yes, i know it makes huge difference when towing anything heavy, i have "big rig" experience.
Click to expand...

A blocked wastegate kills top end power. Compared to a non wastegated turbo a wastegated turbine is sized smaller so it spools sooner and needs the wastegate bypass at higher rpm.
You must log in or register to reply here.

MATH+Logic: An engineering approach in search for a perfect TURBO.
2