Hi guys, my name is Joe (long time lurker, first time poster). A little less than a year ago I bought a 1987 FJ60. This thing was an interesting specimen. No carpet but also no rust as there was 30 years worth of road grime keeping the chassis nice and safe!
The initial idea for the truck was to leave it as is and chuck a big 'ole Chevy V8 in and just dog it, but I just couldn't bring myself to do it. Every time I fixed something I'd find 2 more things that bothered me which eventually devolved into a frame-off restoration.
Here's the truck when I first bought it in Fort Walton Beach, FL. Pretty rust free for having lived next to the beach - none of the typical rust you'd usually see on these things. 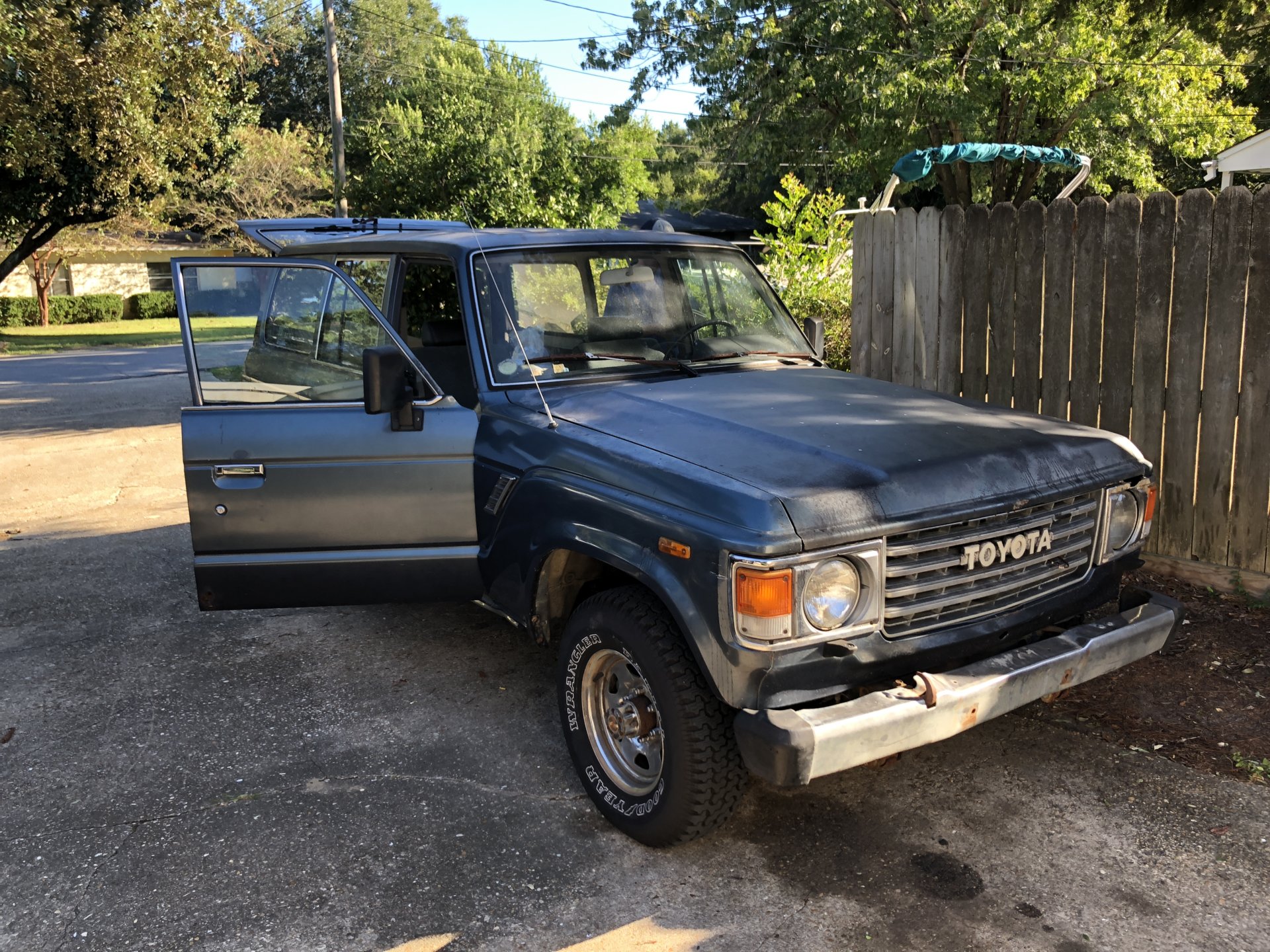 First thing's first: We started yanking apart the truck, panel by panel for body work. You don't realize how much surface area there really is on a Land Cruiser until you body work it. The hood was perfect and so were the fenders save for a couple creases in the passenger side. 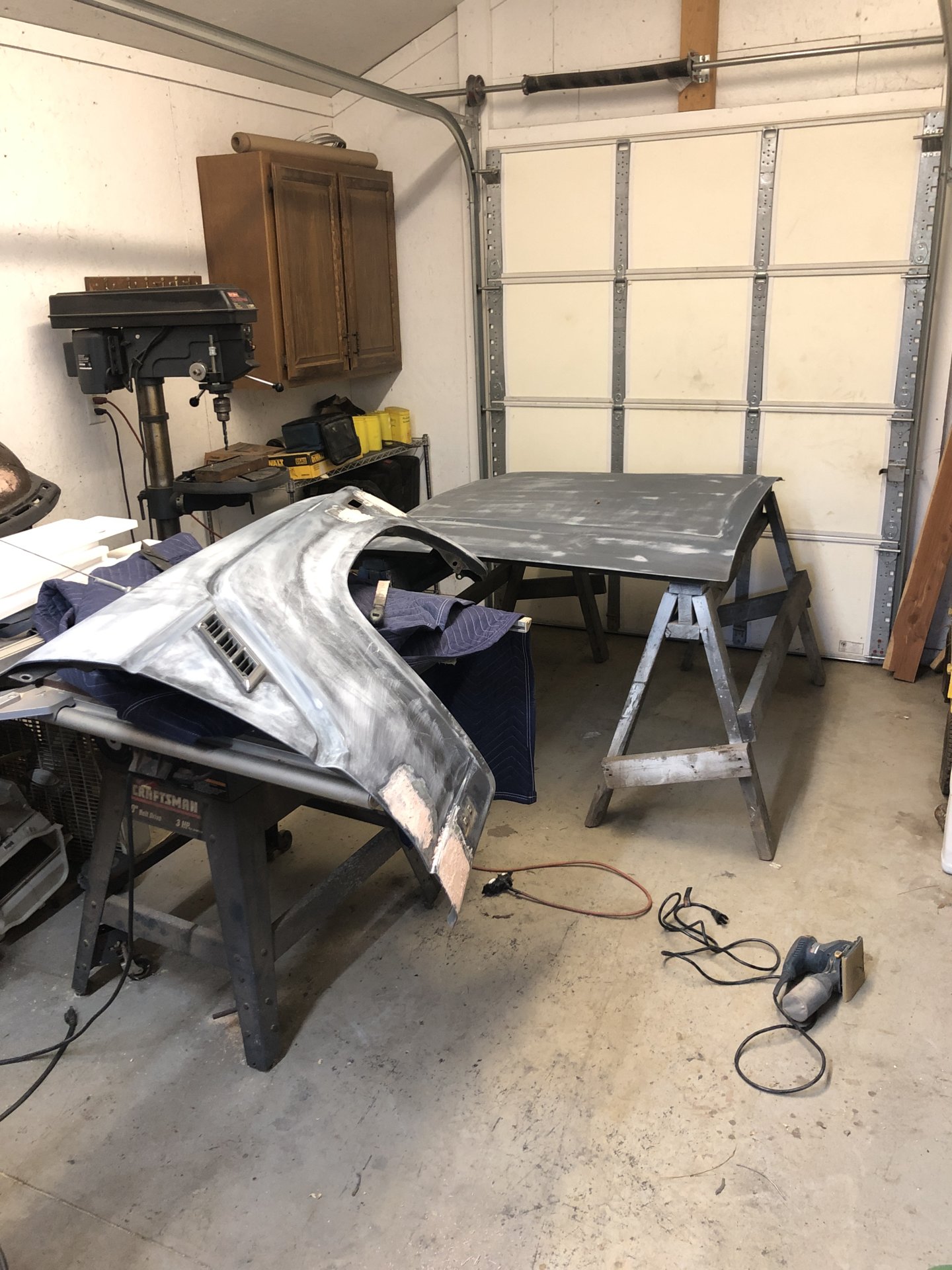 But the doors were slightly more problematic... Here is a photo of one of the repairs I made to the corner. 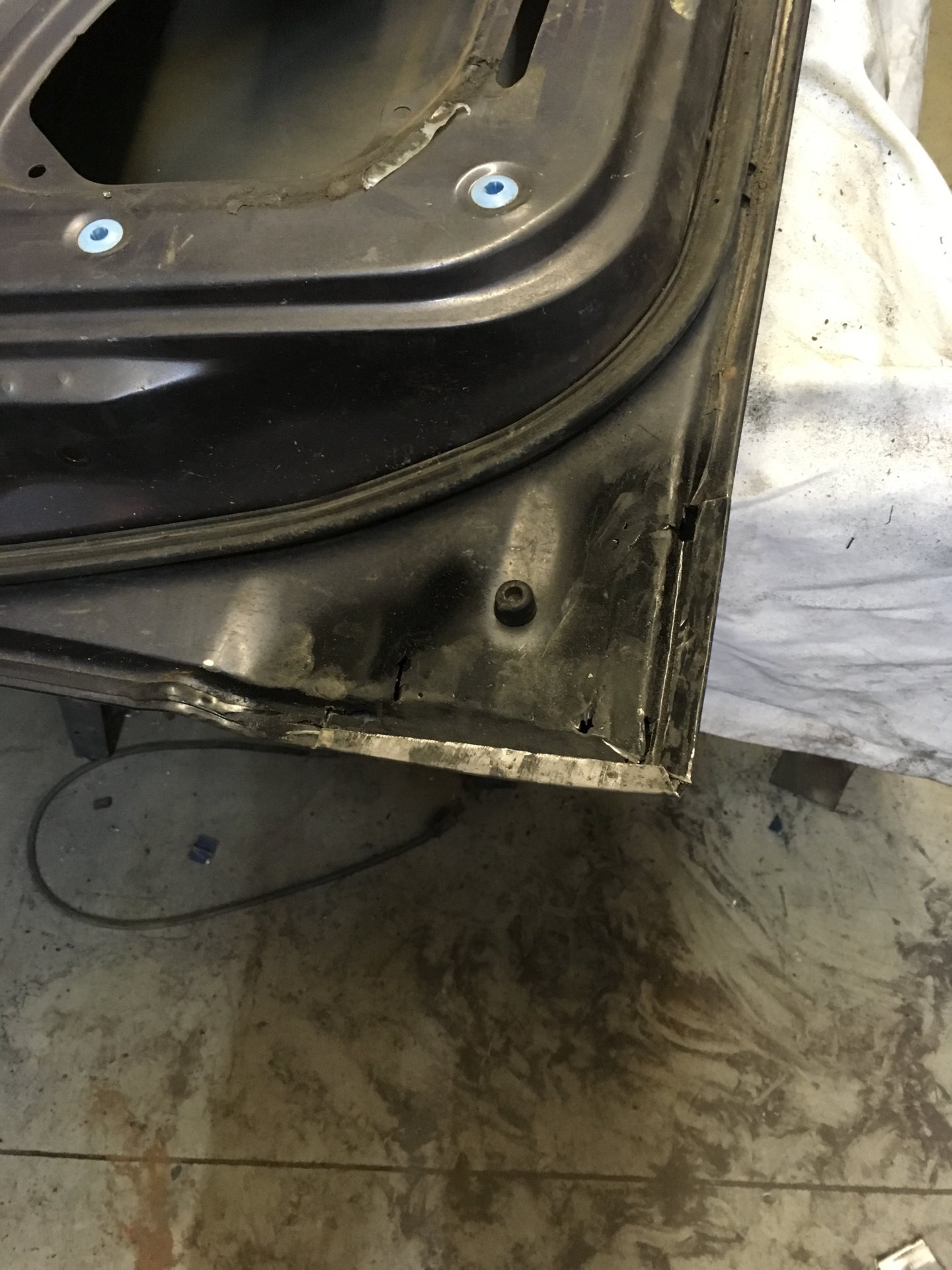 There were a couple of doors like this one, but they're all patched up and ready for another 30 years now! I swear, these things are only so rusty because Toyota seems to have globbed every drainage hole with seam sealer.
Looks like one of the previous owners backed into something big. both cab corners were pretty caved in, but they pulled out nicely with the home-made slide hammer! 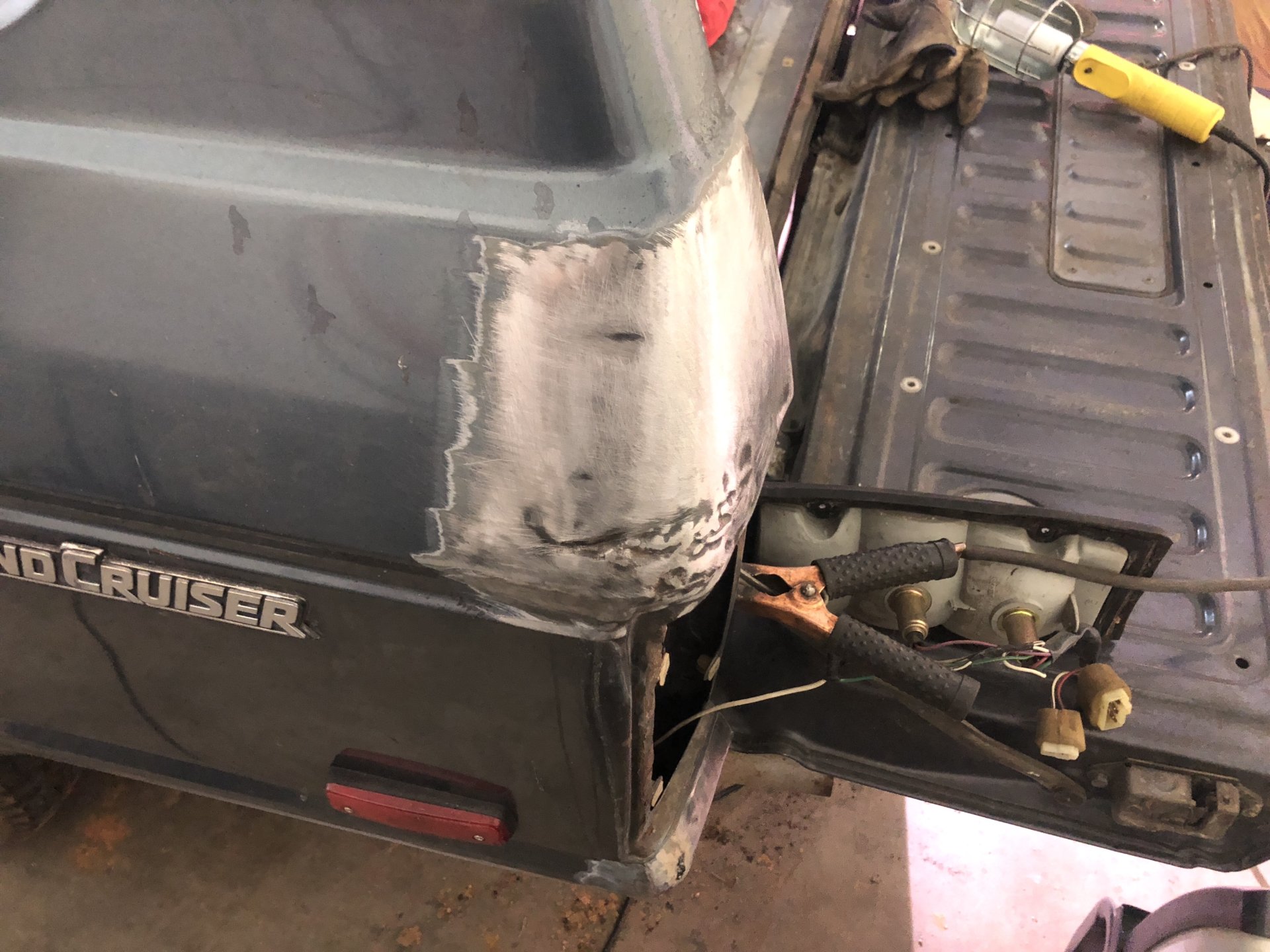 I'm going to update this build thread in pieces so I don't get bogged down with typing and make it impossible to read. Just know more progress is coming and I'm much further along than the thread currently indicates! 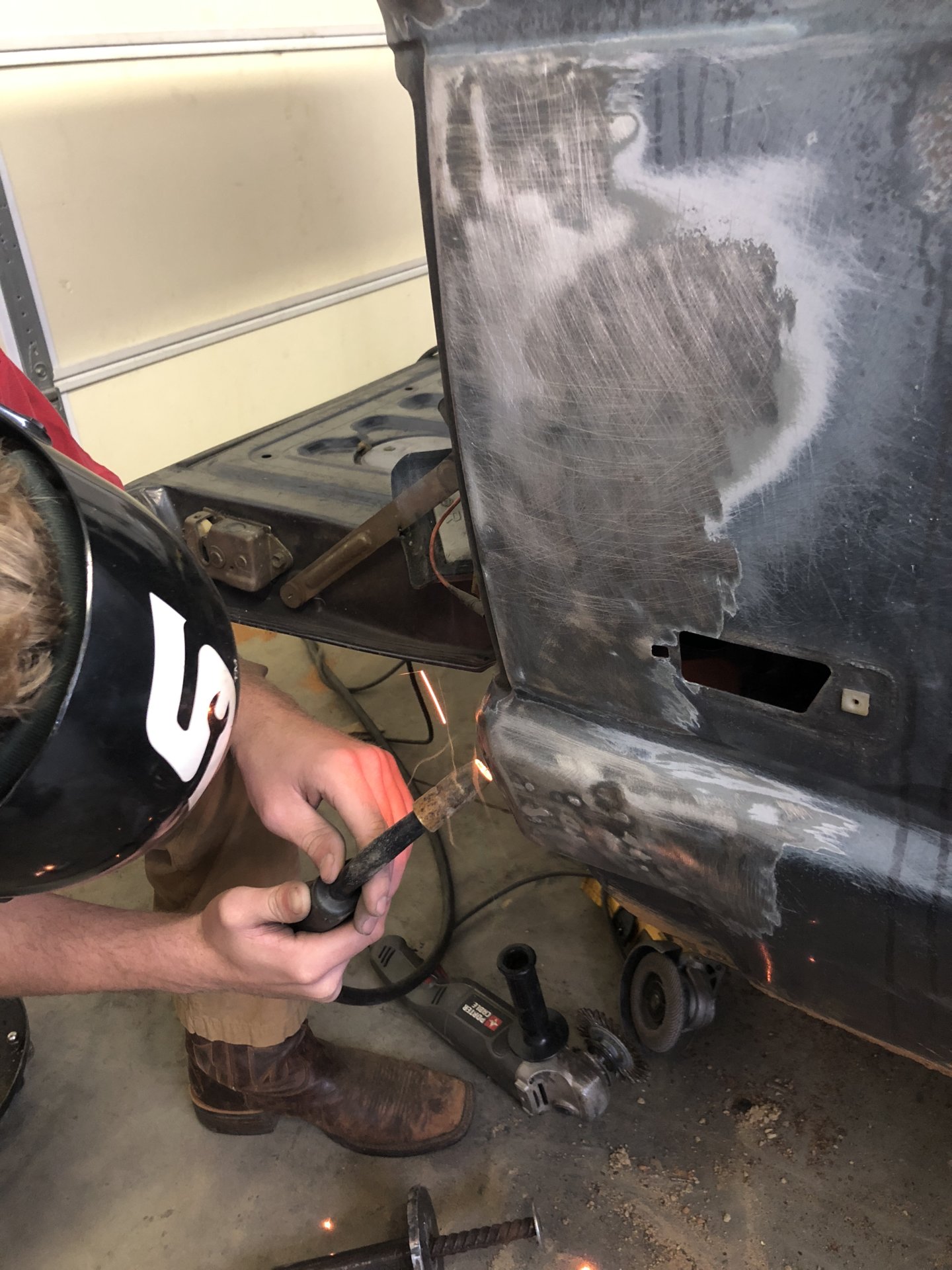 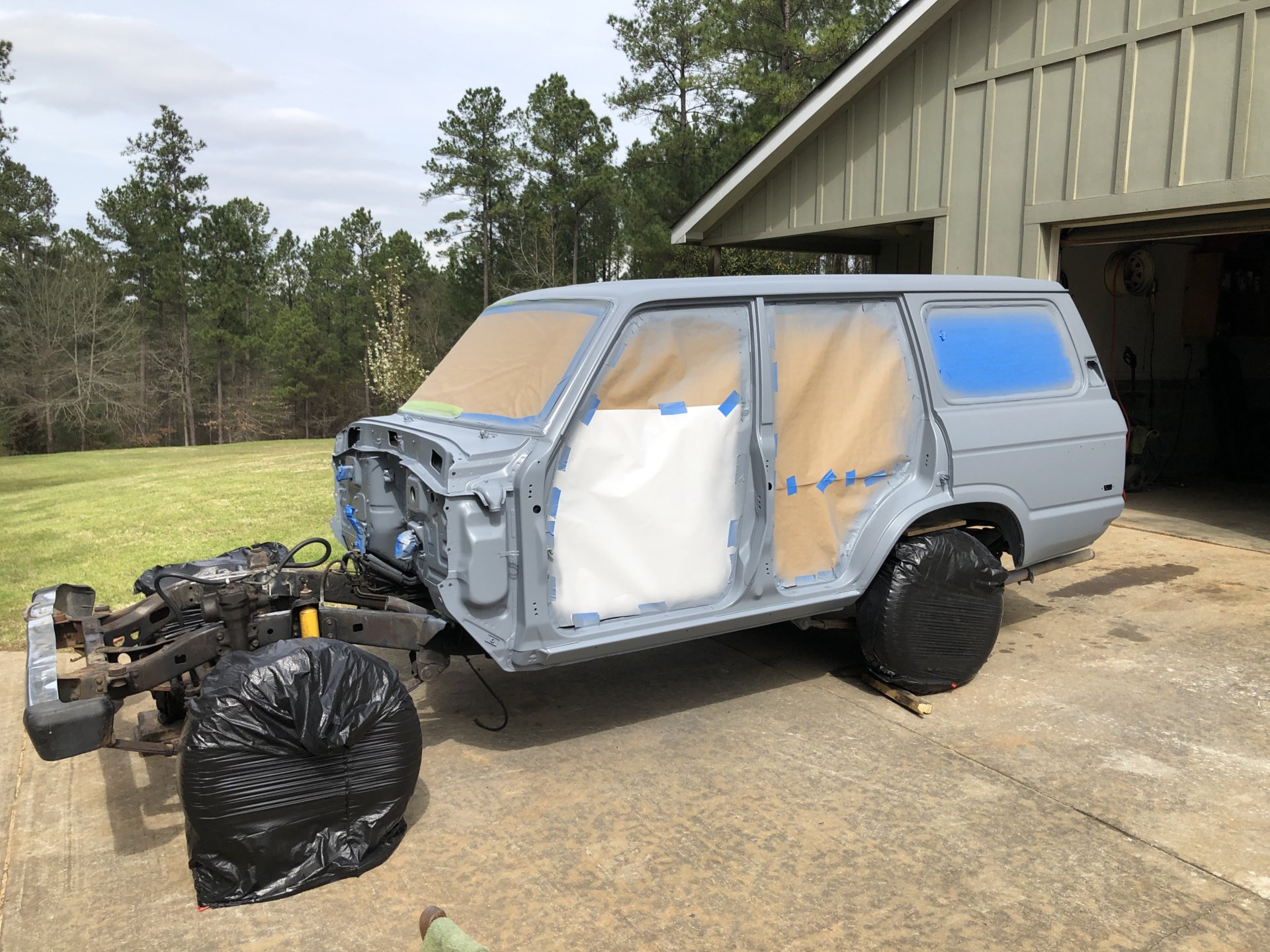 Next on the list was to fit up the LS. I'm sure some people may not love the idea of putting a Chevrolet engine in a Toyota but it's just too dang perfect.
Here's a couple pics of the engine mount fabrication process. 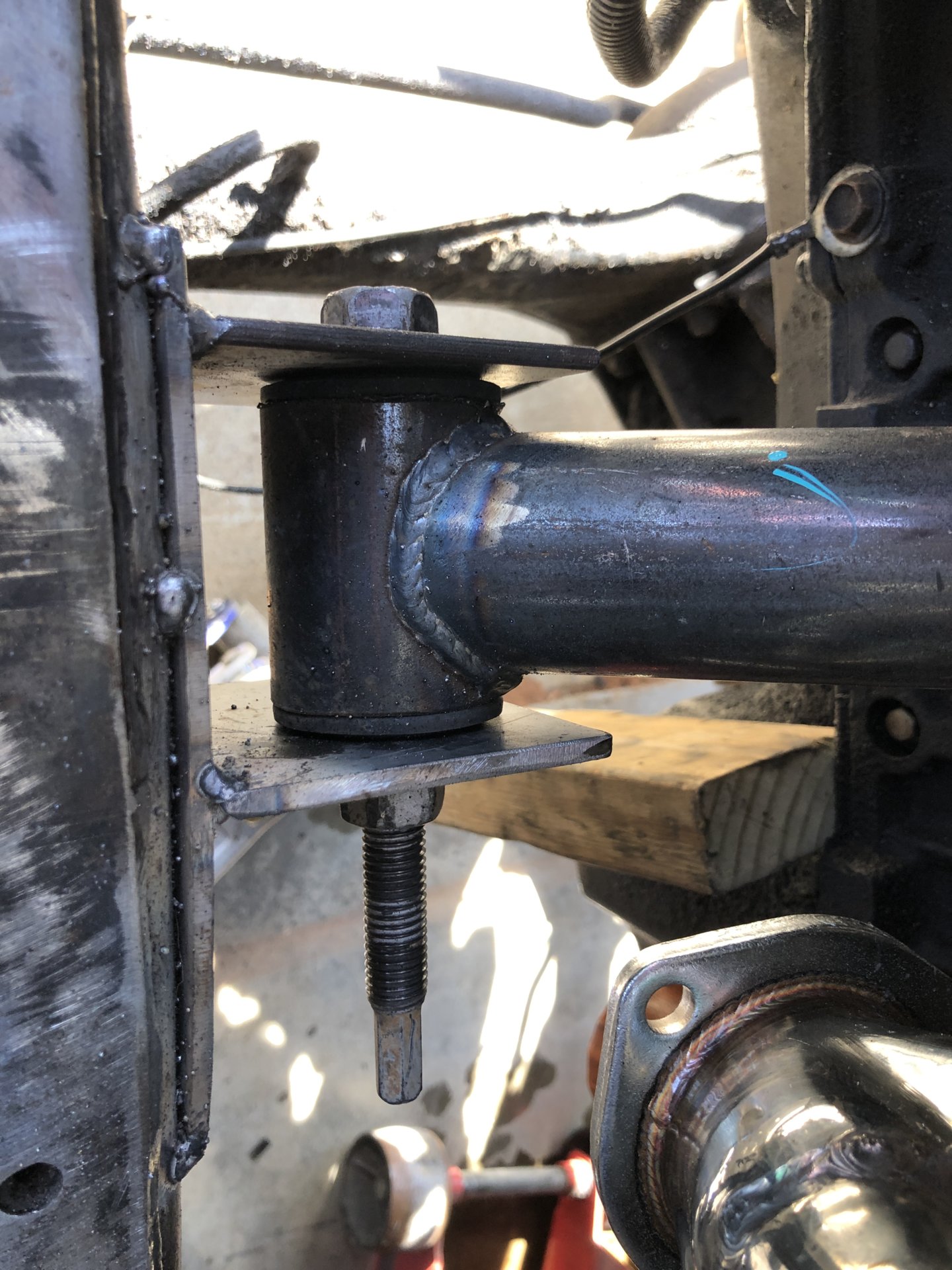 The mount is just some spare 1/8" wall tubing I had laying around paired with some unused leaf spring bushings. The bolt is just something that fell off the truck I pulled the engine out of - I'll be changing it to a more appropriately sized one in the future. 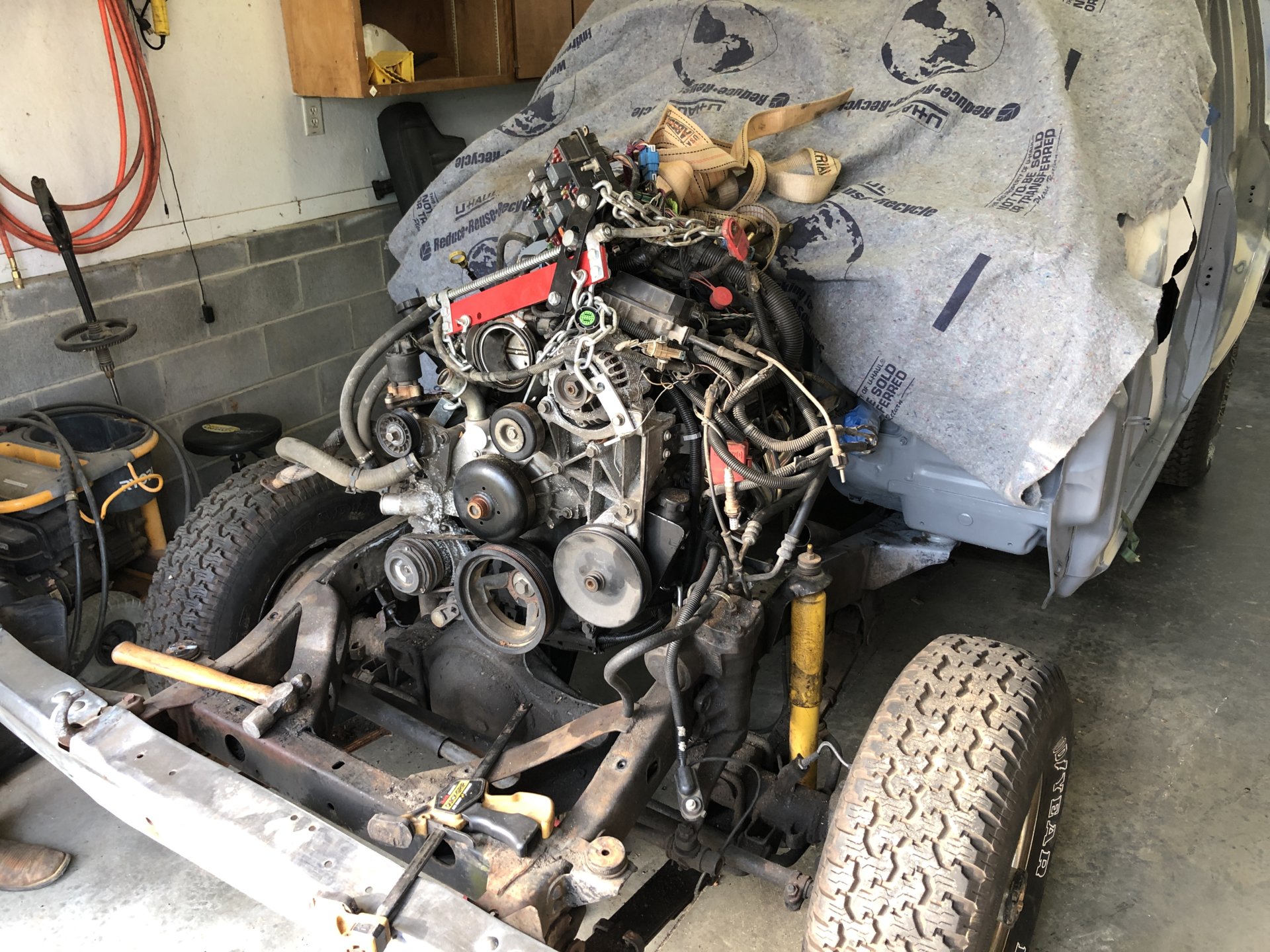 There she is in all her glory... sure is purdy (these are the least attractive engines ever made IMO).
Next is one of the most expensive parts of the build: the transfer case adapter. Advance Adapters is really proud of this one coming in at just shy of $1000. 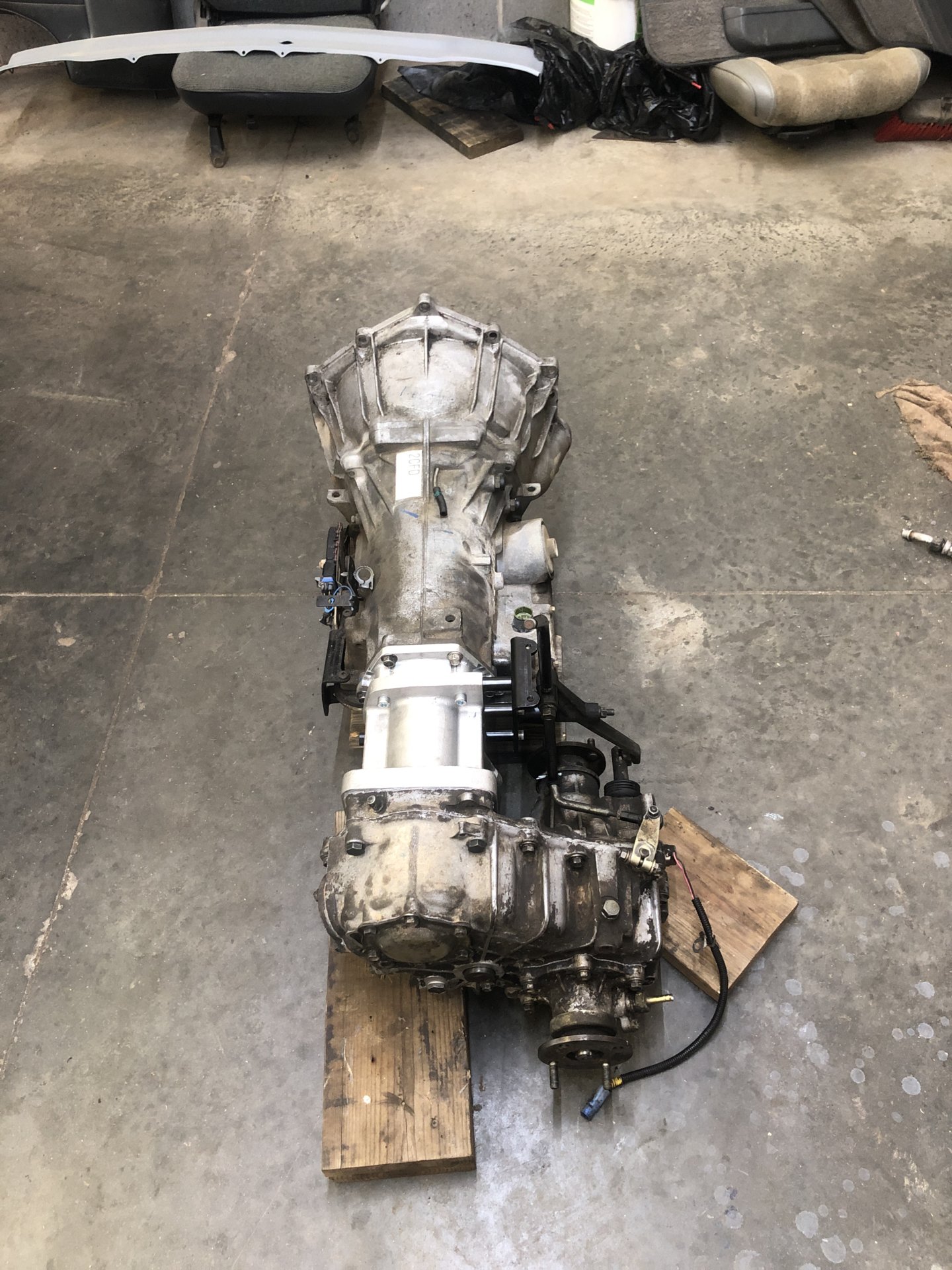 Installation was pretty straight forward. Took a few hours as the transmission was already off the engine. In order to install the adapter you basically have to tear apart the transfer case, so go on and tidy up while you're in there.
I also took apart the steering box and re-sealed it. I had never rebuilt a steering box before so this was definitely an interesting experience. Should be good to go for years to come. 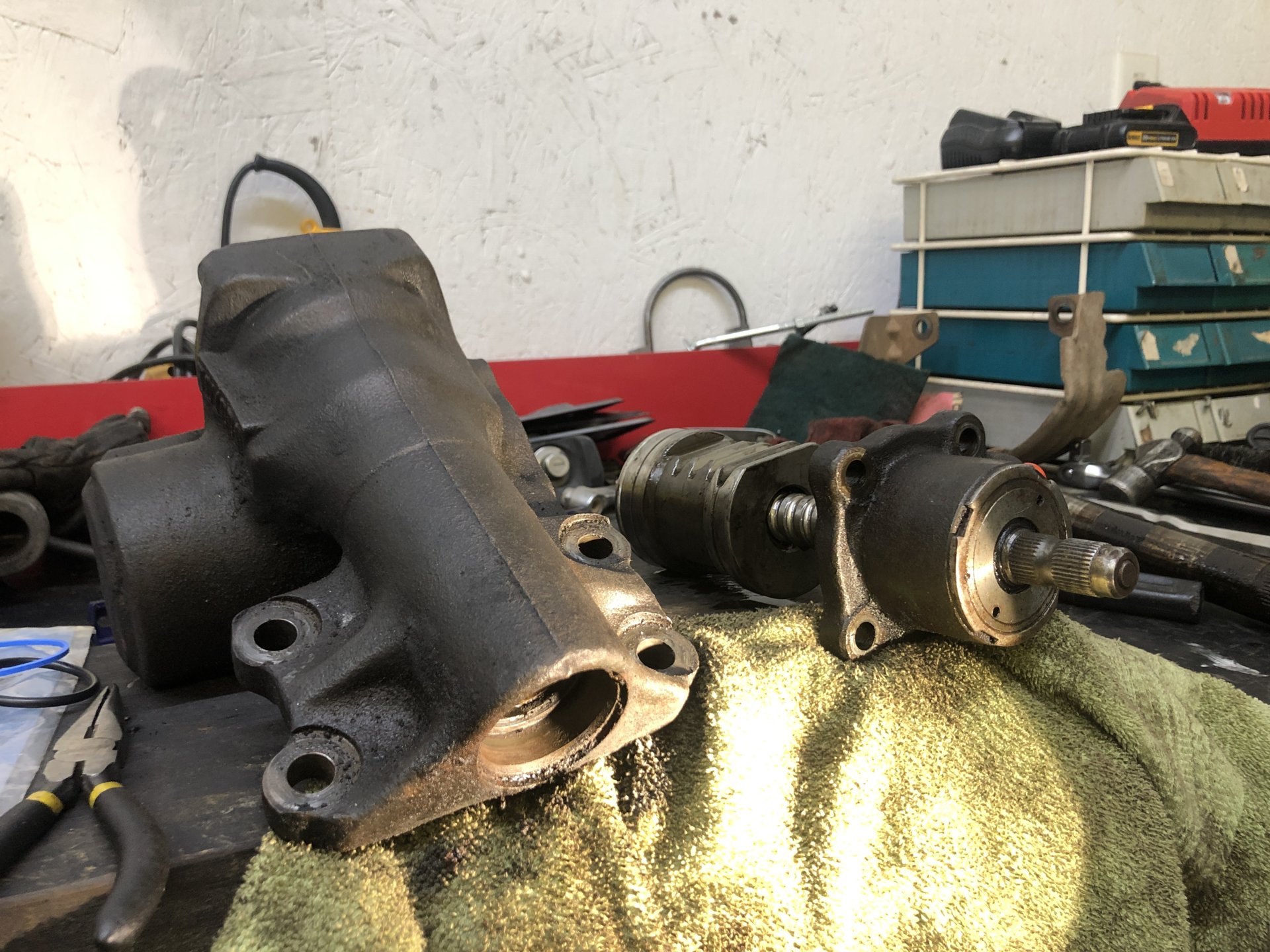 Next up is prep and paint!

Really trying to walk the line between show car and realistic daily in both the budget and time departments haha.
H

what was the donor vehicle?

H4everything said:
thanks for sharing

The engine and transmission came from a 2001 Silverado 1500. The 4L60E isn’t my first choice but it was a steal so I guess we’ll see how long it lasts. It’s apparently been rebuilt within the last 50k

Not completely sure yet. It’s definitely going to have to be cut and lengthened. The troubling part as I’m sure you know is pan clearance for the transmission and engine oil pan. I’ll definitely have to either shorten the 5.3 pan or get the “hot rod” kit from Chevrolet. I’m hoping my angles work out where I don’t need to smack the trans pan with a hammer but if I do, so be it.

The H3/muslce car pan kit is honestly a bargain. I don't know how finalized your mounts are yet but id recommend mounting the motor as far back and as far towards the driver's side as it will go. This will help angle the front driveshaft away from the trans a bit

cruisermatt said:
The H3/muslce car pan kit is honestly a bargain. I don't know how finalized your mounts are yet but id recommend mounting the motor as far back and as far towards the driver's side as it will go. This will help angle the front driveshaft away from the trans a bit
Click to expand...

I actually just put in an order for the oil pan kit and some other odds and ends to get the front suspension back in ship shape. I'm debating on whether or not I need to replace wheel bearings/trunnion bearings. There haven't been any obvious issues with them and I'd like to save the money if possible (those sort of expenses stack up real quick). Leaning towards just waiting.

I've recently put in a lot of orders for parts including but not limited to a much shallower Camaro oil pan so I can clear the diff, sway bar end links, sway bar bushings, all the tie rod ends, and a carpet set from Dave @dnp . In the mean time, here's a little teaser of the final color: 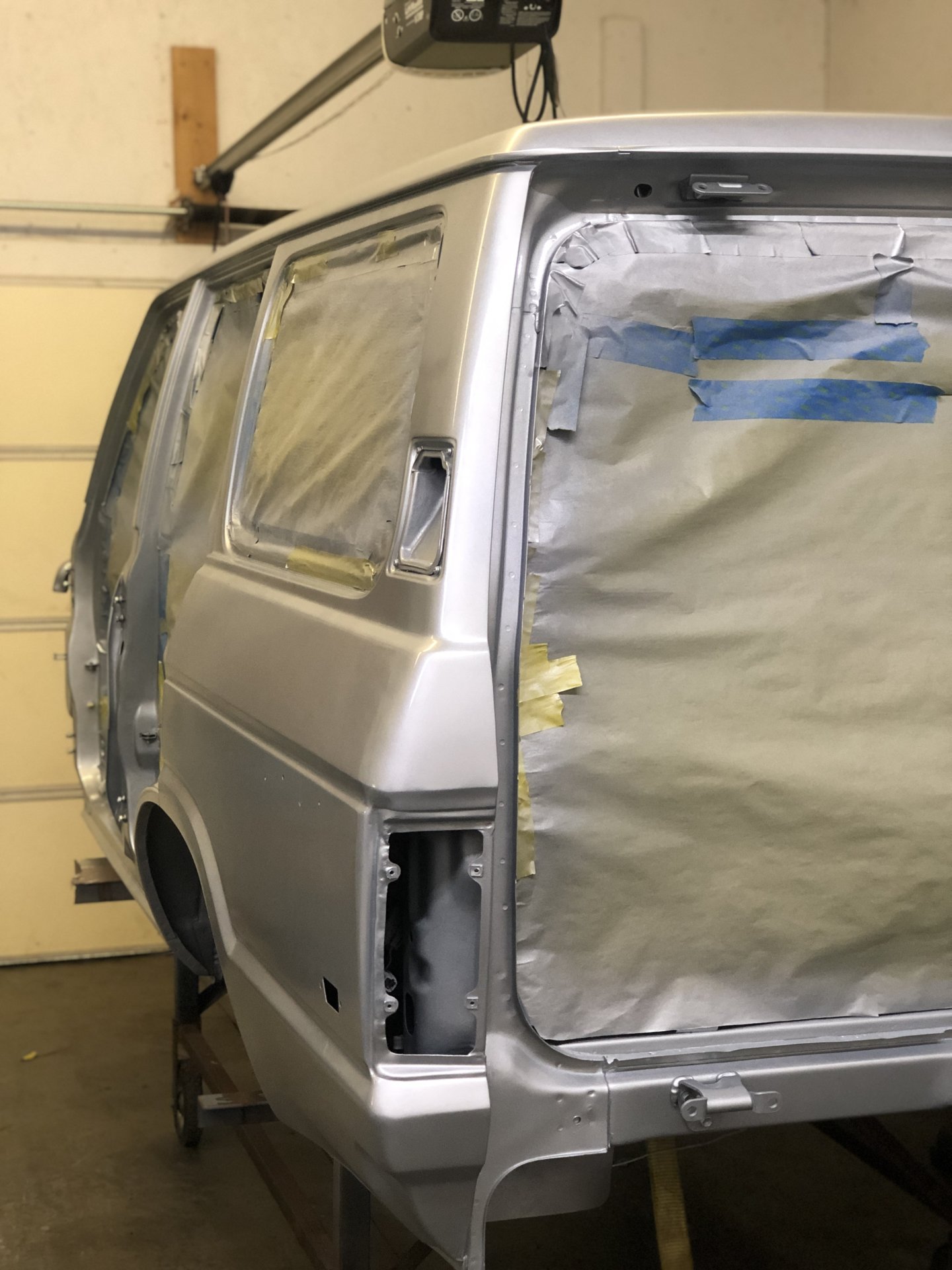 There are still a few coats to go before it's ready to put back together, this is really just a photo I took because I couldn't contain my excitement after getting the jambs sprayed. As you may have noticed, the body is off the frame - remember when I said I was just gonna toss in an LS and call it done? I guess I lied.
Here are the frame rails after taking them down to bare metal and spraying satin black (still has the old springs on with crusty axle housings). 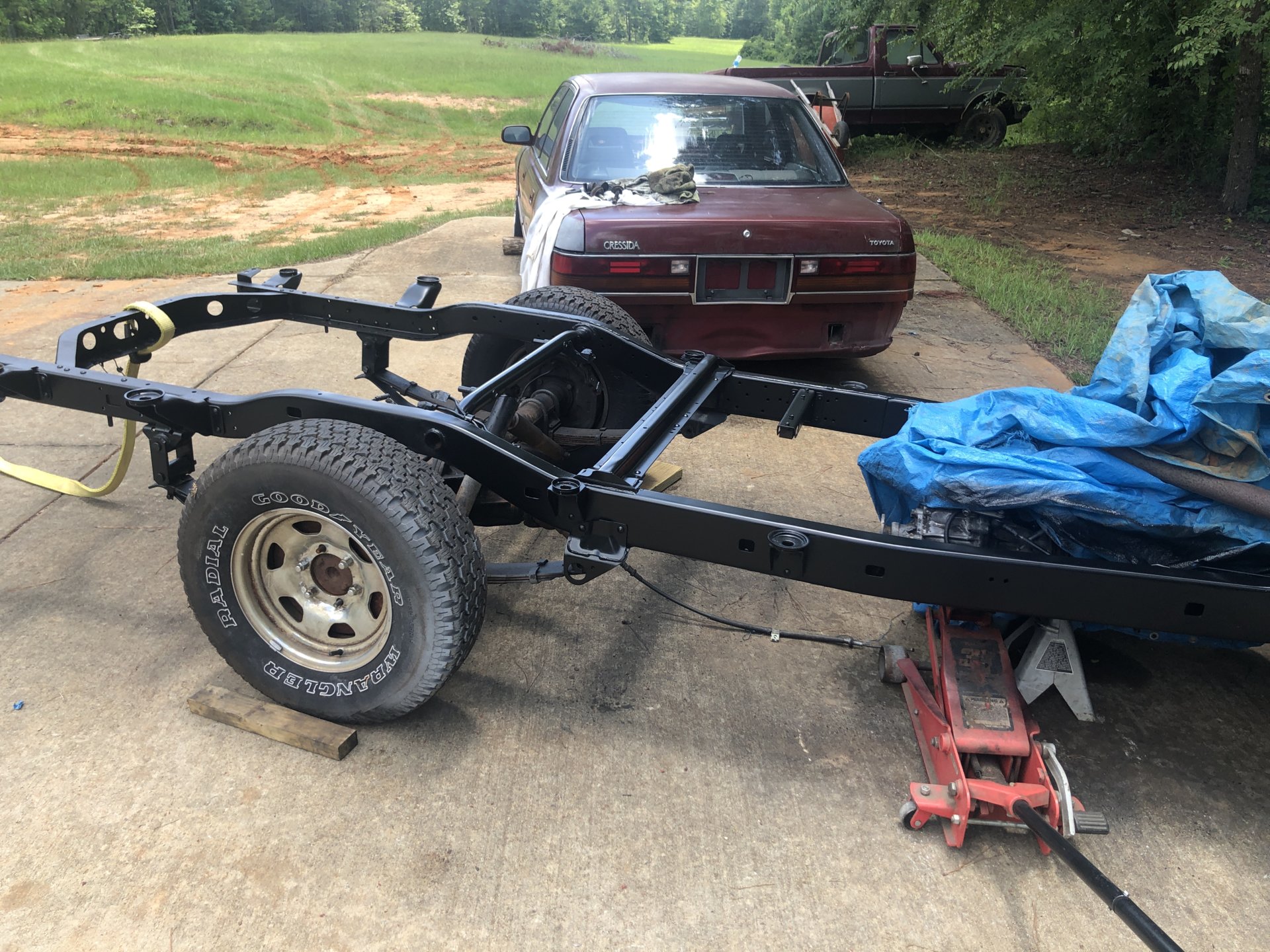 Not sure what's next on the agenda. I'll either take the axles out, clean and paint them then reassemble with the lift kit, tie rod ends, etc. OR scuff all the panels up and spray another coat of color on them. Decisions, decisions. That's all for now, I'll keep this thread updated when I make any headway! 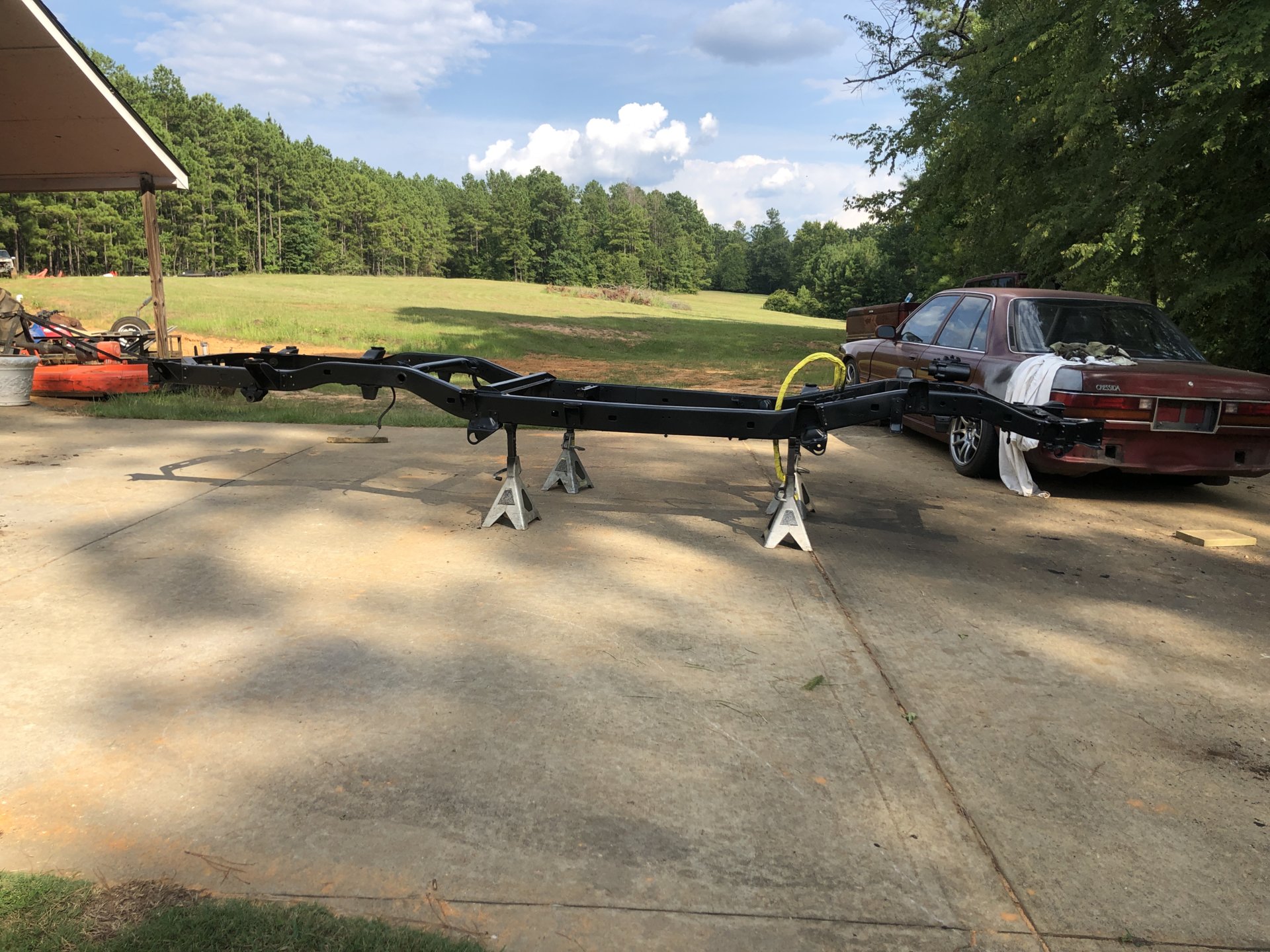 is the cressida on cr kais?

is the cressida on cr kais?
Click to expand...

Good eye! Yes and it also has a VVTi 1jz and S14 suspension

suppjoe said:
Good eye! Yes and it also has a VVTi 1jz and S14 suspension
Click to expand...

Here’s the bi-weekly update:
Got the axles cleaned up, steering joints replaced with some new new, installed my OME lift kit, and finalized the engine/transmission mounts. I also got around to shortening the rear driveshaft! Pics below 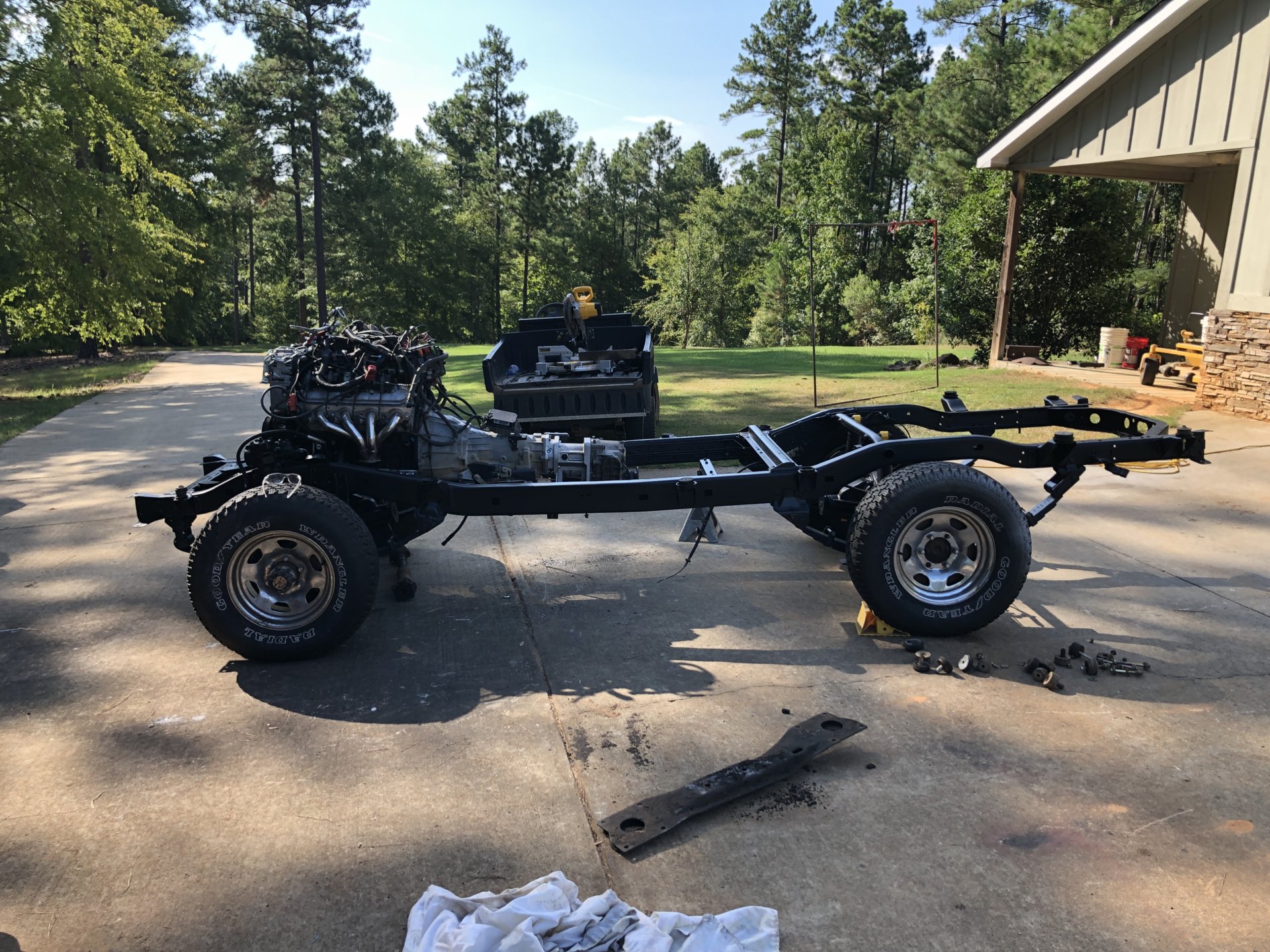 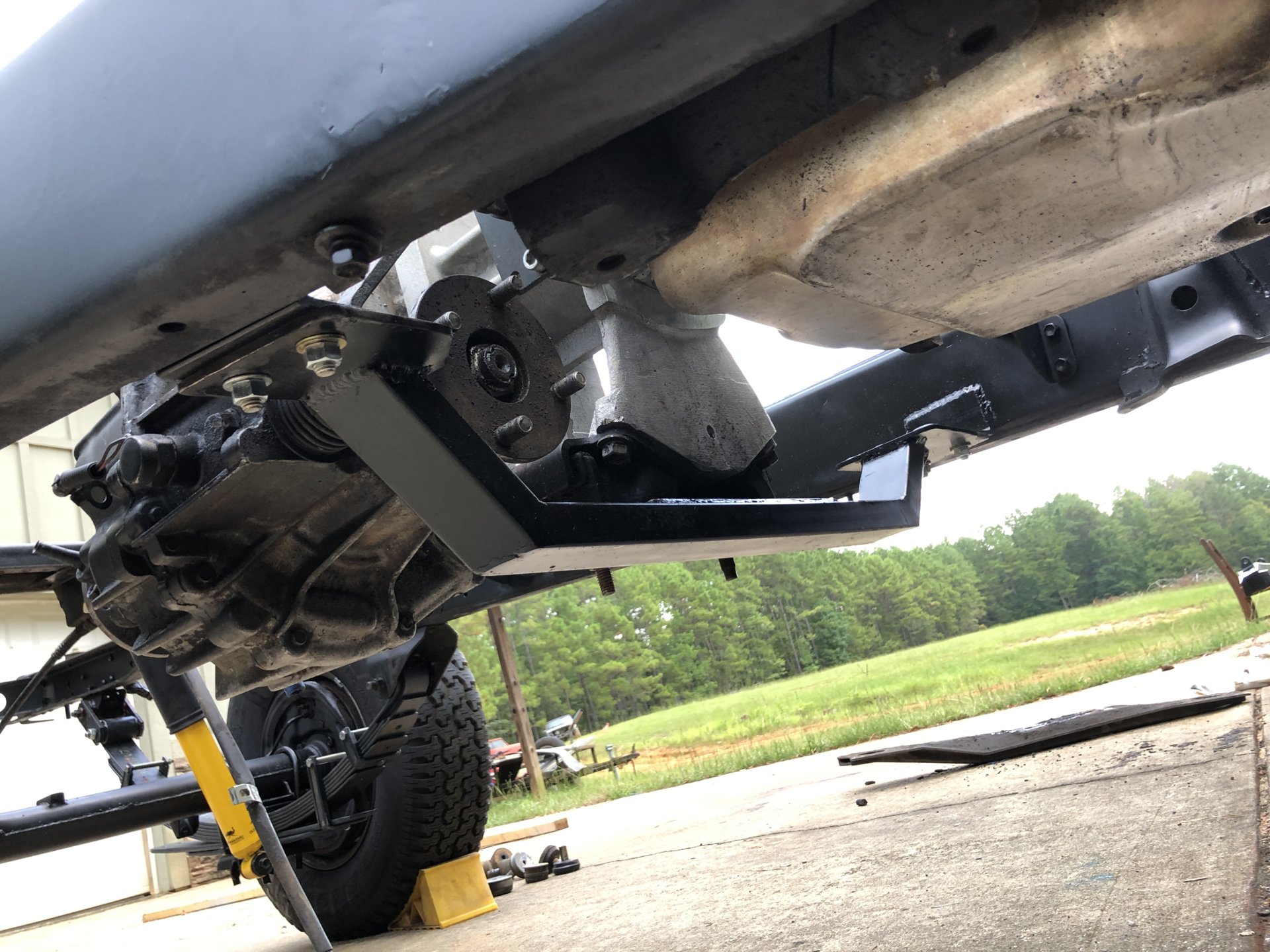 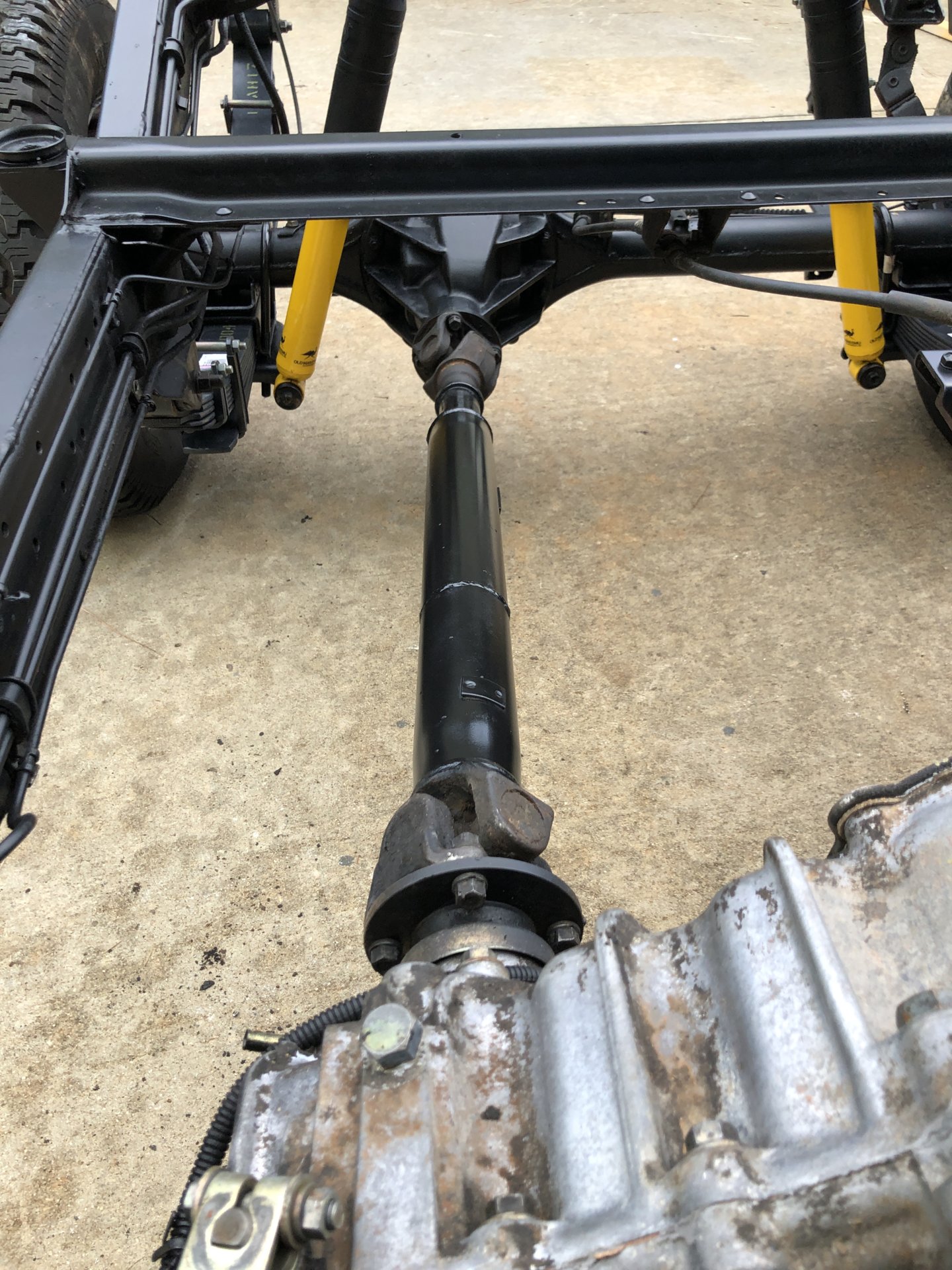 Also blew on a second coat of paint on the body. Next time I update it should be me putting the body back on the frame!
Also, I don’t have photos but the front shocks foul on the springs and won’t mount :-/ has anyone else run into something like this with the newer nitro shocks from OME? Thinking I should get in touch with the retailer.

I like your style. I’ve got the same contemplation as you on the axles

Back with a quick update.
With my final semester of undergrad starting updates will be rather sparse. I was able to get some work done on the holiday weekend, however. I got my issue with the front shocks solved and they are now installed. I filled the torque converter and re-installed the transmission with the help of the tractor (the tranny/t-case combo is HEAVY). I also did up all the transmission/VSS wiring while the body was off.
Next a couple friends and I put the frame back under the body - this was much more difficult with the engine/transmission in and a lift kit installed. If you plan to do the same and have a 2-post lift available do that. We ended up making some sketchy brackets that bolted in where the front door hinges go so that the frame would be able to roll under the body (photo). 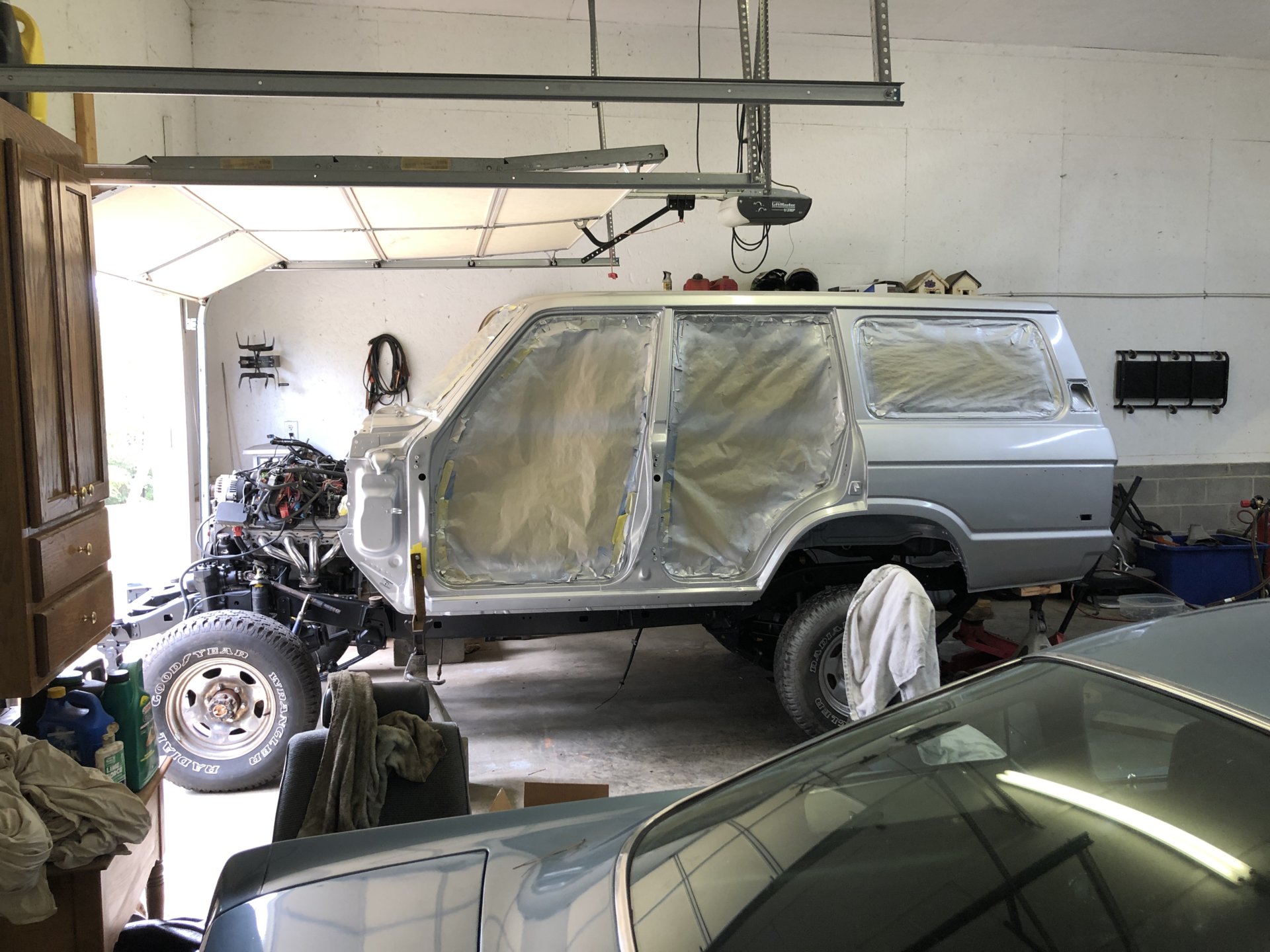 Once we got the body close the mounts actually lined up perfect on nearly the first try! Engine/trans placement also wound up being perfect.
Next on the to-do list will be wet sanding everything - I've already done most of the doors, the hood, and the front valence panel. After sanding I can get the final coat of paint down which will move me into the wiring phase. I'm thinking the actual engine wiring will be easy as I have the entire harness that ran the engine/transmission from the donor truck.
My main questions to anyone who has been down this road before:
- Was it problematic to keep the original Land Cruiser body wiring (eg. interior lighting, heater stuff, etc.) which is switched ground and also run the engine which is switched hot?
My plan has been to keep the original body wiring in the LC as it is in decent shape and would save a ton of time and just run the engine off the original Chevrolet engine fuse panel - separate systems. Does this work? Any input is welcomed at this point because I am by no means a wiring guru but know just enough to get by. 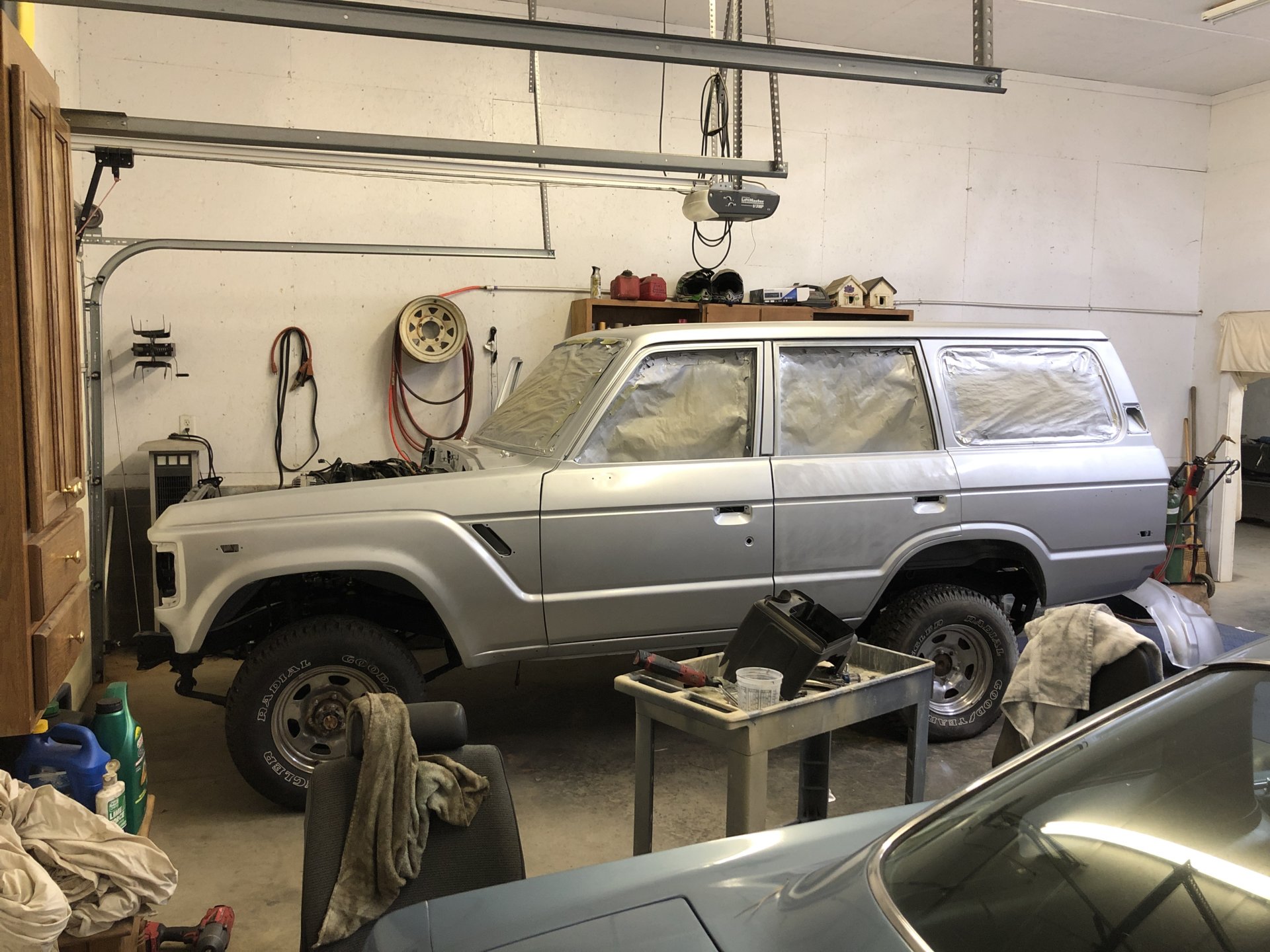