what is THIS for? well whatever it is it's leaking...

This is a pic of the head and the #5 spark plug. The culprit is the white thing circled in the middle, between the #4 and #5 spark plugs. What is it/its purpose? Kinda need to know since it's leaking like MAD. Is it a replaceable plug of some sort? Is there anything I can do to stop this thing from making a HUGE mess? Any help would be GREATLY appreciated since I have to take it on a 12 hour drive on Saturday up to Idaho. Thanks a lot! 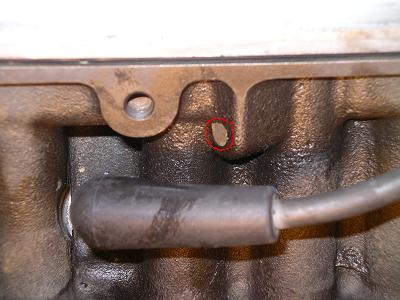 If the plug launches your motor is toast.

It can be tapped and plugged

Whoa thanks! I didn't even know what to search for.

Just read that linked thread. Is JBWeld really strong enough to plug something like that?? Need to get some in my emergency kit if so.

Southbound said:
Just read that linked thread. Is JBWeld really strong enough to plug something like that?? Need to get some in my emergency kit if so.
Click to expand...


I would never use JB on anything, but thats me.

Or would it be better to tap and plug it? And how might one pull the current plug out?

ZRotheohv said:
Or would it be better to tap and plug it? And how might one pull the current plug out?
Click to expand...

Local Toyota dealer or a machine shop that does heads can do it.

Or is it possible to press the plug back in?

ZRotheohv said:
Or is it possible to press the plug back in?
Click to expand...

Please do it the correct way, your 40 will thank you.

Any idea if there's a Toyota part or will any ol' allen plug do?

The plug that is there from the factory (as your's looks to be), is a press in plug. No threads, just pushed into place. Poor choice on Toyota's part. That's why your's is leaking and why they are known to fail. As mentioned in the other thread that is linked to above, when they do it is a major problem. There is pressurinzed oil behind the plug. When the plug comes out or simple starts leaking badly enough (and it will eventually) you pump your oil right out the side of the engine. The "cold" side as it happens, so you don't get a lot of smoke and stink like you would if it was hitting the hot exhaust. (Of course you don't get an oil fed fire on the exhaust manifold either, so there is *some* good there...) The first thing most folks know about the failure is when the engine seizes from lack of lubrication.

IF Toyota sells a replacement press in plug, don't get it.

You can drill out the existing plug, tap the hole and use a threaded plug (there are no existing threads there... )

You can braze the hole up. Awkward to do with the head installed, but very doable if you are good with a torch and brazing rod. You colkd likewise solder it. Still awkward at best with the head mounted.

You can plug the hole with epoxy. You will want it very very clean. I would probably use a putty, thicker than the regular JB weld, so that it doesn't ooze out before curing. Although if you can keep it in place, JG weld works very well.

I have actually fixed this problem in the field by packing a press in zerk full of JB weld, pushing some of the JB in ahead of the zerk and then pressing the zerk into the hole. Drove it away after just a few minutes and it held for at least a year. Probably many years, I've just lost track of what ever happened to that particular head.

Is it possible to drill out, tap and fix in place? If so, drill size and tap size?? How do you keep drill shavings out of the engine? Thanks.

I had no idea about this... I will check mine today.

Rent a car or something, but don't take it on a 12 hour drive if it is already leaking. If it blows, it will fawk up a perfectly good engine.

About ten years ago, my dad lent my aunt his (now mine) 60 to haul some crap around. My dad received a call saying that the truck has died and that it ran out of gas. It didn't run out of gas, it ran out of oil !!!

My dad is a woodworker, not a mechanic, so he popped in a wooden plug, added oil, and somehow drove it to the dealer.

The truck probably only had 90,000 miles or less when this happened.

It lookes like the dealer JBWelded a bolt in the hole .

It's still holding strong (the bolt, not the engine!)

But I assume I can't do it myself (the tap and plug) correct? At least with standard Craftsman taps. The head is very hard.

I tapped mine with Craftsman taps. Make sure you drill the hole to the correct tap size. The tap will say what the ideal hole size needed for the tap. The tap might break if you have too small of a hole. You just need to make sure you have someway of getting the metal shavings so they don't go in your engine.

I also used thread lock on my hex bolt when I installed it to make sure it doesn't work itself loose.

What did you do to prevent the shavings from getting in your engine?

And what size tap/hole did you choose?
You must log in or register to reply here.

M
Fj62 cut off and restarted on its own