So every so often my H55 will pop out of first gear. Hard to find a pattern to it, but when it happens my hand is off the shifter and I'm up into the RPMs a little, and never seems to happen when I'm paying attention. The whole assembly moves quite a bit, I have big hydraulic motor mounts (4BT Cummins) and a rubber mount under the Toy Box. I'm going to go looking for interference with the shifter, a few weeks ago a redid the trans hump and double booted everything. In the mean time, is there something else to look at?

The trans is quiet, shifts well. It never comes out of gear when I have my hand on it, and I don't feel any pressure on it. I'm wondering if there is a linkage thing going on?

Maybe the transmission mount is cracked.

My H41 did that sometimes, pretty much exactly like you described. never did find the cause.

Is it a used transmission from another part of the world?

I have the same problem but only when it's cold. After the trans heats up it does it less.

Here is my take on it.
My trans is from Australia.
At some point the transmission output seal to the xfer case in the trans has become compromised and fluid is leaking into the xfer case.) Both oils should be segregated and not be allowed to mix, but you should know this.) This action wears out the gearing, or linkage, and it start to wear the gearing because the case is lacking oil. As a temporary fix I have the hose from the xfer case fill plug running to the fill plug of the transmission.

Or, the springs that hold tension on the shifting linkage have been weakened and are allowing the shift to pop out.
Last edited: Sep 16, 2017

Maybe try leaving it in first when you park for a while and see if it is the stiffness of the boots that is doing it. They might relax a bit after a while?

Oops... just looked at your post again and realized you're first gear is giving you trouble; not your fifth.
Last edited: Sep 16, 2017

Do whatever you can to prevent that from happening again. It may already be too late. When any gear starts to jump out of engagement when under extreme torque, it takes a little bit of metal off the engagement teeth when it does it. It creates extreme wear. The teeth become less square and more tapered and lose their ability to stay engaged. Each time it jumps out, it makes it easier to jump out the next time.

@OSS I'm definitely keeping my hand on the shifter when accelerating in 1st until I figure out what's going on. It's only slipped a handful of times, maybe 10 total since I've owned the truck. I've never had a Land Cruiser Manual eat itself and I've done horrible things to several them. I'm confidant there is something else causing this since it isn't a notorious 5th gear slippage. I sure hope it's not something like what you've described.

@Cruiser Jimmy I don't know the history on the transmission, other than it was fully "rebuilt" in 2004 by Jeremiah Proffitt. Seals are good, just had the whole s***show apart down past the 5th gear housing, reassembled it with the fine folks at Marlin Crawler while shorting through the horrors lurking inside the neglected Toy Box and Split Case. What are these "shift springs?" Went through a couple of diagrams to try to figure that out. Everything feels really good when shifting, but I've been wondering if something is worn that could be causing this.

I suspect in there in the end there has to be something that is causing physical interference, whether it's in the trans hump, the new shift boots, a broken motor mount/trans mount... something that's allowing this to happen. Everything runs too well for it to be anything else, at least in my mind.

Hopefully I'll get a little downtime this week and be able to dig around in there. At this point my best guess is the boots being too stiff somehow. I really don't want to change that situation, it's nice and quiet in the cab after redoing the trans hump. I'll have to play with it and see what I come up with. If anyone else has any ideas, I'm all ears. The thing that is nagging me about this is that there isn't anything that is sticking out in my mind and I have been up and down this truck since bringing it back to life, I'm worried I won't find anything... leading me back to the transmission itself.

How long do you stay in 1rst? behind my smogged 2f, it literally only gets me rolling 20ft then shifting to 2nd.

Probably a soft or broken detent spring. The spring holds a small metal ball in place that helps keep it in gear. There is one for each gear.
I had one that used to fall out of fifth.
It means taking the top cover off the gear box and that will mean removing the transmission I think. Ive only fixed them with the gearbox out.

Here's a picture for what Rosco talked about.
It's the spring with the number 33275A.
Look it up on Toyodiy.com.

While you're at it, there is a Technical Service Bulletin for a spring revision to increase the spring rate for the transfer case, both springs. These springs are the same concept as the trans springs we are talking about. You can changed them out as well. My four wheel drive kept coming out and into neutral. Changed out the springs and it doesn't happen anymore. 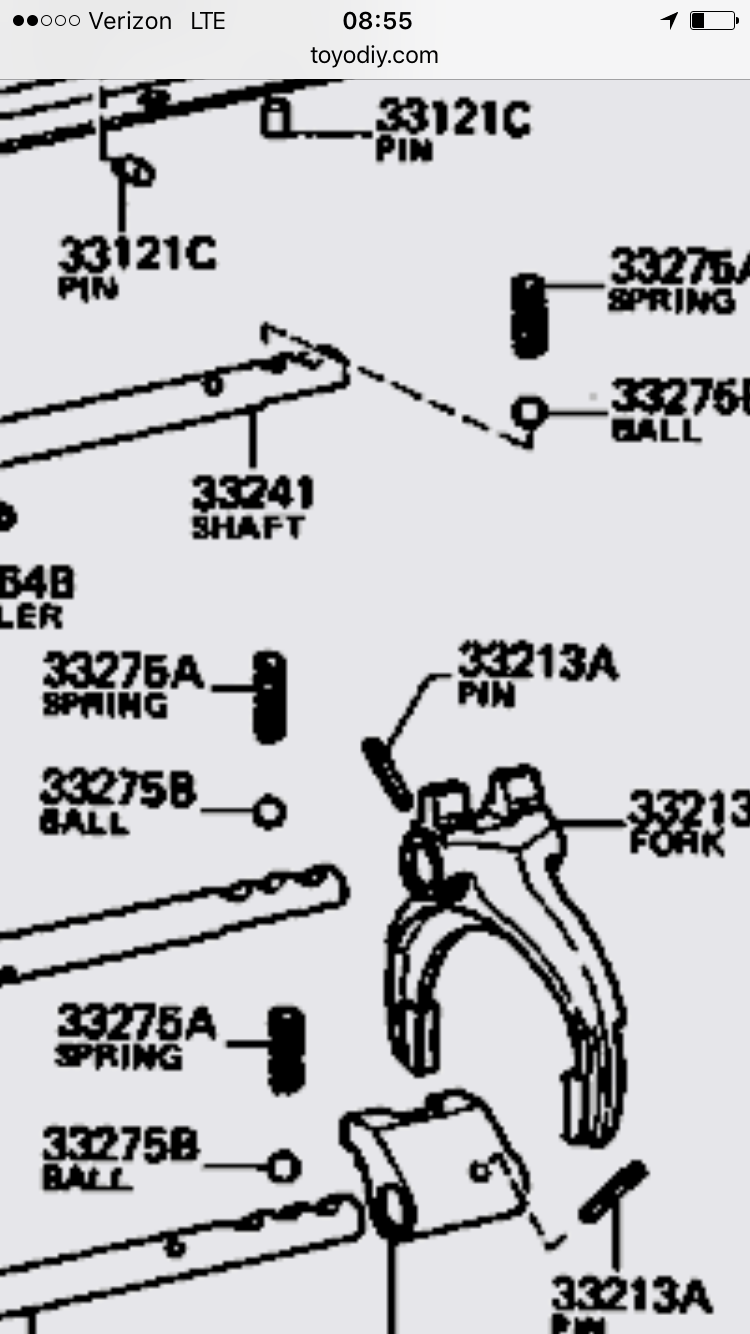 You can pull the top plate without pulling the trans. You’ll need to remove the front seats, carpet, boots & trans hump. Good luck figuring out how the shift rails & forks work. I ended up taking mine to an old school transmission shop that works on classics. The h55 shop manual is very helpful. If the detent ball is missing, drain the trans and look hard for it with an inspection camera. If it gets pulled up into the gears it’ll cause damage. When you reinstall the top plate, pay attention to how the reverse lever works. It’s easy to overlook & reverse won’t engage.

Well everyone, this has been a great thread. Today the trans came apart from the inside. I don't know what happened, it was very sudden and very boring now I'm kinda F'ed. This thing is my daily, never had any trouble since bringing it back from the dead (the truck in question is the mummified remains of Princess the FJ62, look it up there is lots of info), and starting a new, fancy job with a big commute next week.

I was on the freeway, having put about 50 miles on it today alone with no trouble, enjoying some tunes, my newly refreshed AC and my 20 plus MPG, when 5th gear started scream/squeak/shrieking at me, I dumped it into 4th which seemed fine. Shifted back into 5th, same noise, back into 4th, then pulled over. When I pulled over, I suddenly discovered the transmission wouldn't shift. I played with it, pushed the clutch in and out, and I could row through the gears again, but discovered that I couldn't shift after the gears loaded up after releasing the clutch. s***. I got it back in 1st (which drove normally) and limped it about a mile and a half off the freeway and got it to a parking lot. I called Georg at Valley Hybrids and got his take, he said it may be a shifter issue, and that if I can get it to shift again, it'll limp me home in 4th at least. I pulled the shifter out (and tore my freshly redone transmission hump carpet getting the boots off, F MY LIFE), and the shifter bushings and nylon thingamajig were still present on the shifter. I stuck it back in there and decided to do a test run around the parking lot. s*** hit the fan after I put it in reverse, it's like the insides just fell apart. I tried to row through the gears a couple of times, then it finally stuck in reverse and won't come out. While backing up for the tow truck you could feel the gears "slipping" over each other, making a "thunk, thunk, thunk" noise as I backed out (it wasn't a loud pop, just a mild thunk). Then I discovered that it wouldn't roll with the clutch depressed, doing the same thing. I had to have the tow truck guy rock it back and fourth to disengage the t case.

I've spoken to a trans shop that deals with Japanese s***boxes, the head guy says I might have gotten lucky and the nut on the back of the shaft that holds the gears may have backed off, or I may have lost a snap ring, allowing the gears to slide around. Hope it's not the detent ball described about! I know what that is... There is hope that there isn't too much carnage.

I was super gentle on everything once this started. I am hoping and praying I get off easy, and I have learned my lesson and need to go buy a commuter pronto. Pray to the sweet baby zombie Jesus for me. I'm not prepared to buy a new transmission, and depending on how the rest of my wife's day goes, she might murder me. We don't have any guns, so whatever she murders me with will be very painful and slow...

If you have an H55 in good shape that you're willing to part with, message me. I may need it depending on what I find when I crack this thing open.

B
Found a cruiser - looking for some feedback.

Engine heat on hills with the H55F