So today I tore into my son's 94 that the passenger window barely roll down. If by chance we got it down in the summer months, we would need another person to grab on to both sides of glass to help raise it up.

For information purposes today my shop is 40 degrees and after completing the fix I was able to roll down and back up the window in 8 seconds.


The best part? No parts were purchased. The regulator assembly and motor just needed a good cleaning. Total time to complete 2 hours per window.

Since I can only upload 5 attachments per post, I will continue this in two more sections.

First you need to remove your door panel and your window regulator which has the window motor attached. 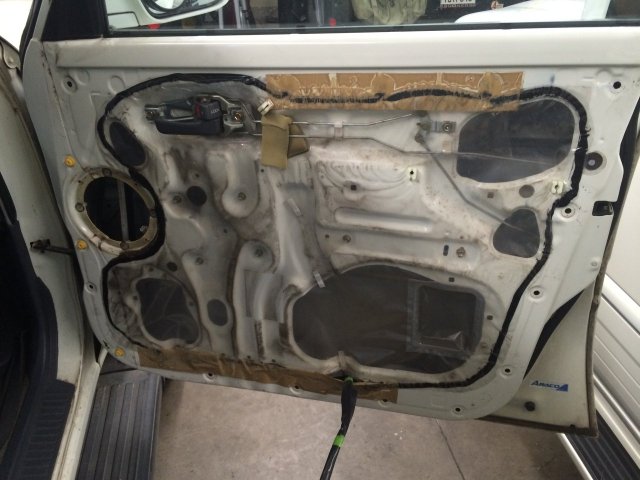 REMOVING REGULATOR AND MOTOR ASSEMBLY.
In order to remove the regulator/motor you will need to lower the window almost all the way down where you can unbolt the window from the track. There are two 10mm bolts, both are located at the bottom of the glass. One is on the bottom right below the glass and the other will be removed through the small hole to the left of the largest opening shown on the inside of the door.
After the two bolts are removed, you can now grab on to the window and manually raise it up. I used ping pong paddles to wedge between the window and the metal door to hold the window in the upright position.
Unplug the power disconnect to the window motor.
Now you will need to unbolt all the other 10mm bolts to enable you to remove the regulator and motor assembly. The assembly will slide out the largest hole in the door.

Next is to remove the motor from the regulator assembly. There are three screws that you can remove with either a T25 torx head or a large flat screwdriver.

Here's a pic of the old grease on the motor gear: 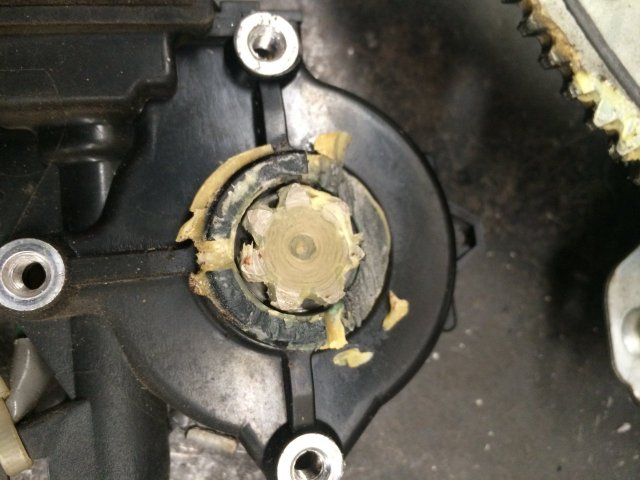 Now I removed the metal cover located opposite of the gear. You will need to pry out the two metal tabs to get the cover off. The cover is sealed with a black urethane sealant so you will also need to pry it off. 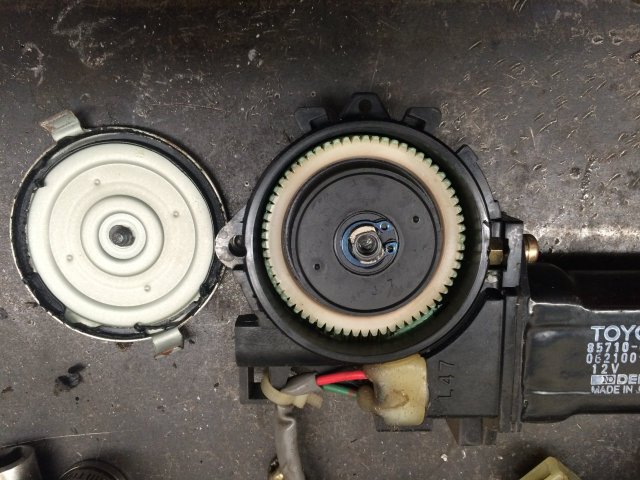 Next you will need to remove the c-clip with a set of c-clip pliers. After doing so, pull the black and plastic gear assembly out. You can also remove the metal gear. Note the two metal washers. One is below the white gear and the other is captured by an o-ring on the gear. I got rid of the o-ring on the gear because I noticed that it created resistance as I turned the gear. I don't believe it to be necessary unless you are submerged in water up to that point. Remove and clean with components with brake cleaner. I left the the washer alone below the white gear. 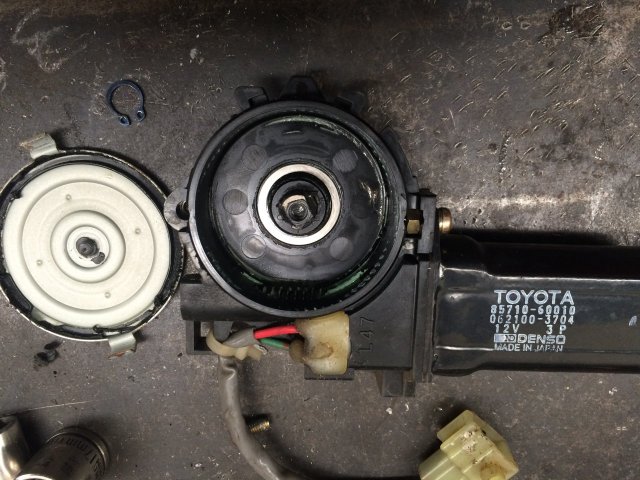 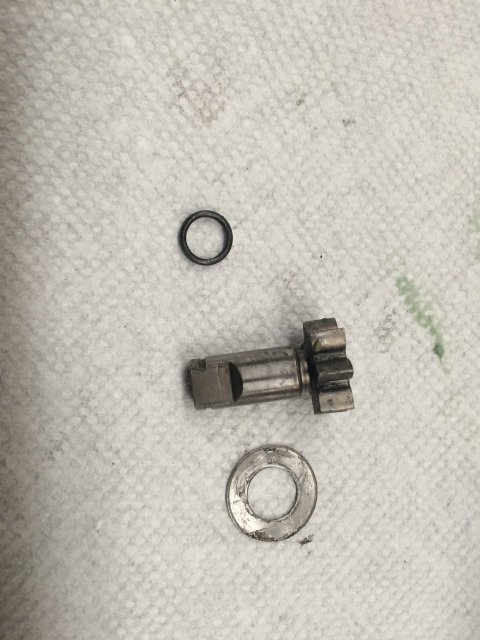 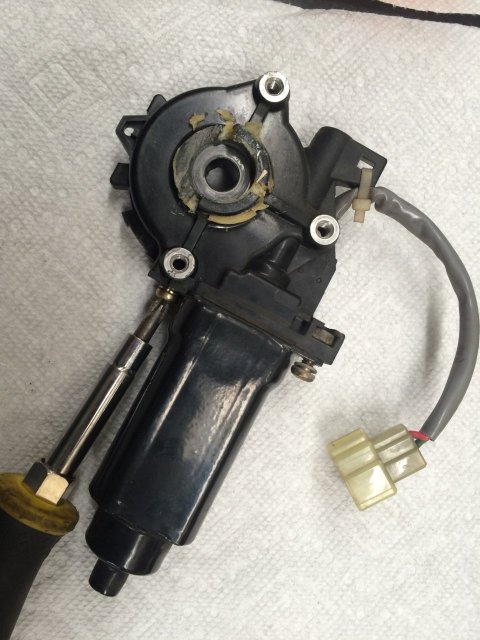 Now just pull it out 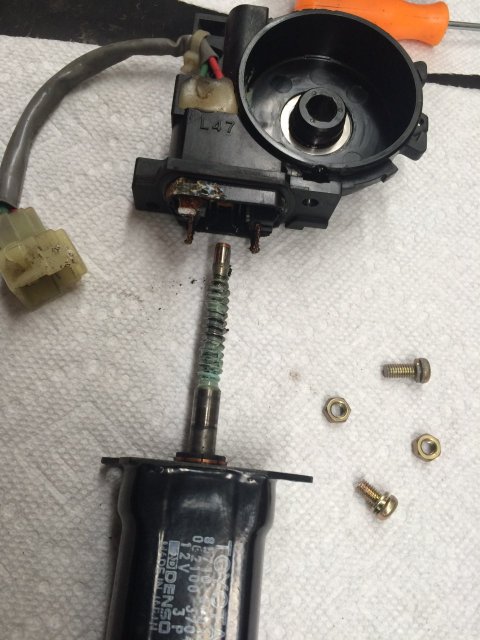 and notice how nasty & black the brush area is. 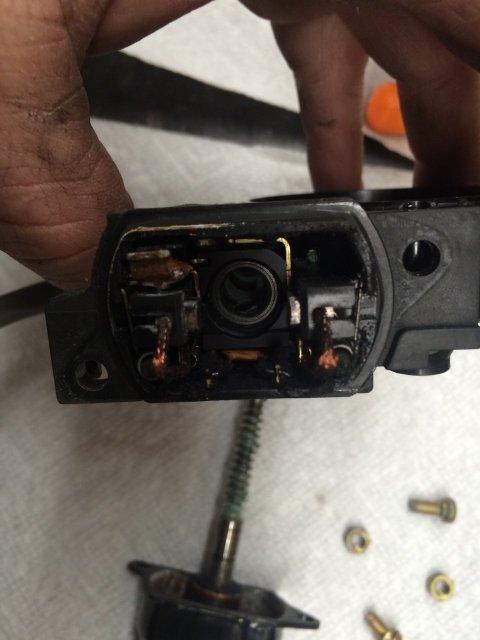 Next just pull out the armature. Notice how dirty the copper is where the brushes make contact. Screwdriver is pointing at it. 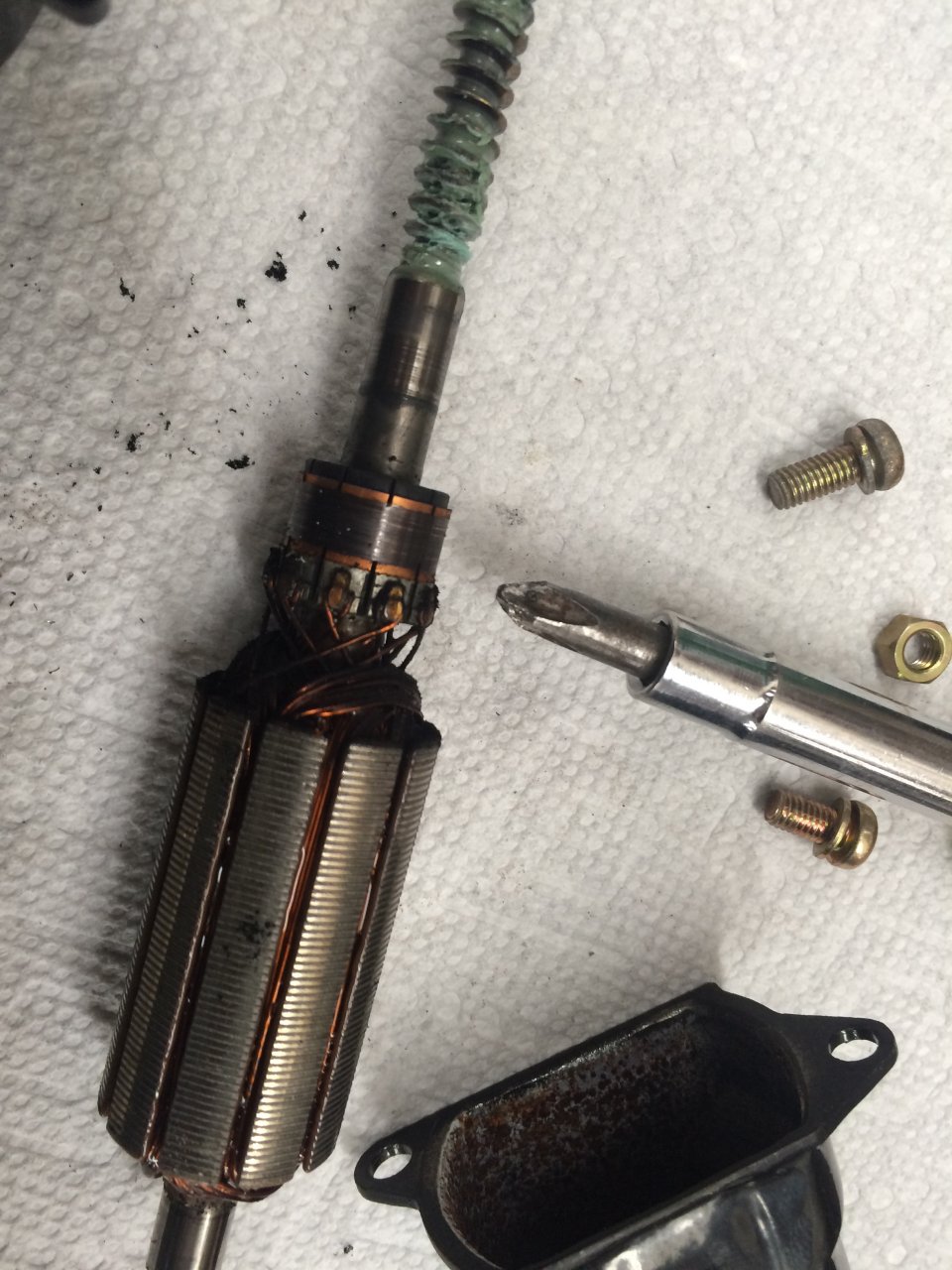 Now I used a pick to clean the grooves that are filled with black gunk and polished it with a piece of scotch brite. I also sprayed starting fluid into the brush area contacts to clean it as well. 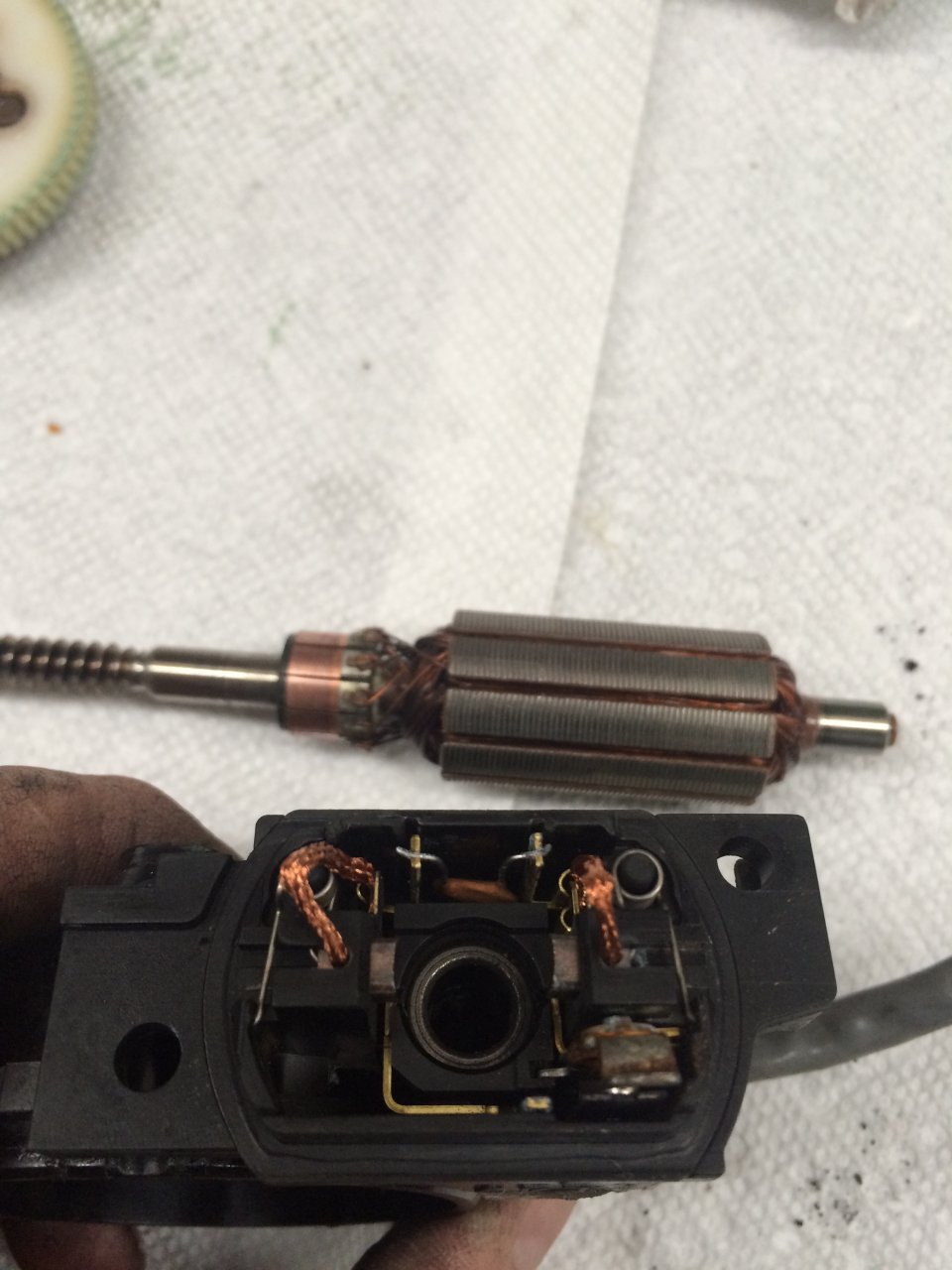 As you remove parts, notice where the moving items make contact with fixed parts and clean with brake cleaner. This also includes the black housing center hub and the inside of the white/black gear. 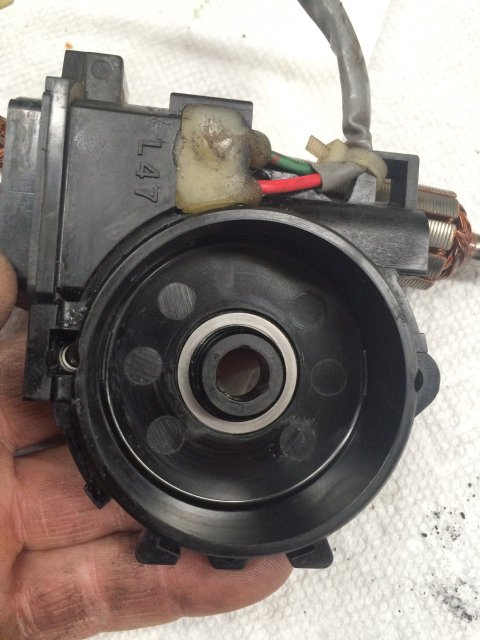 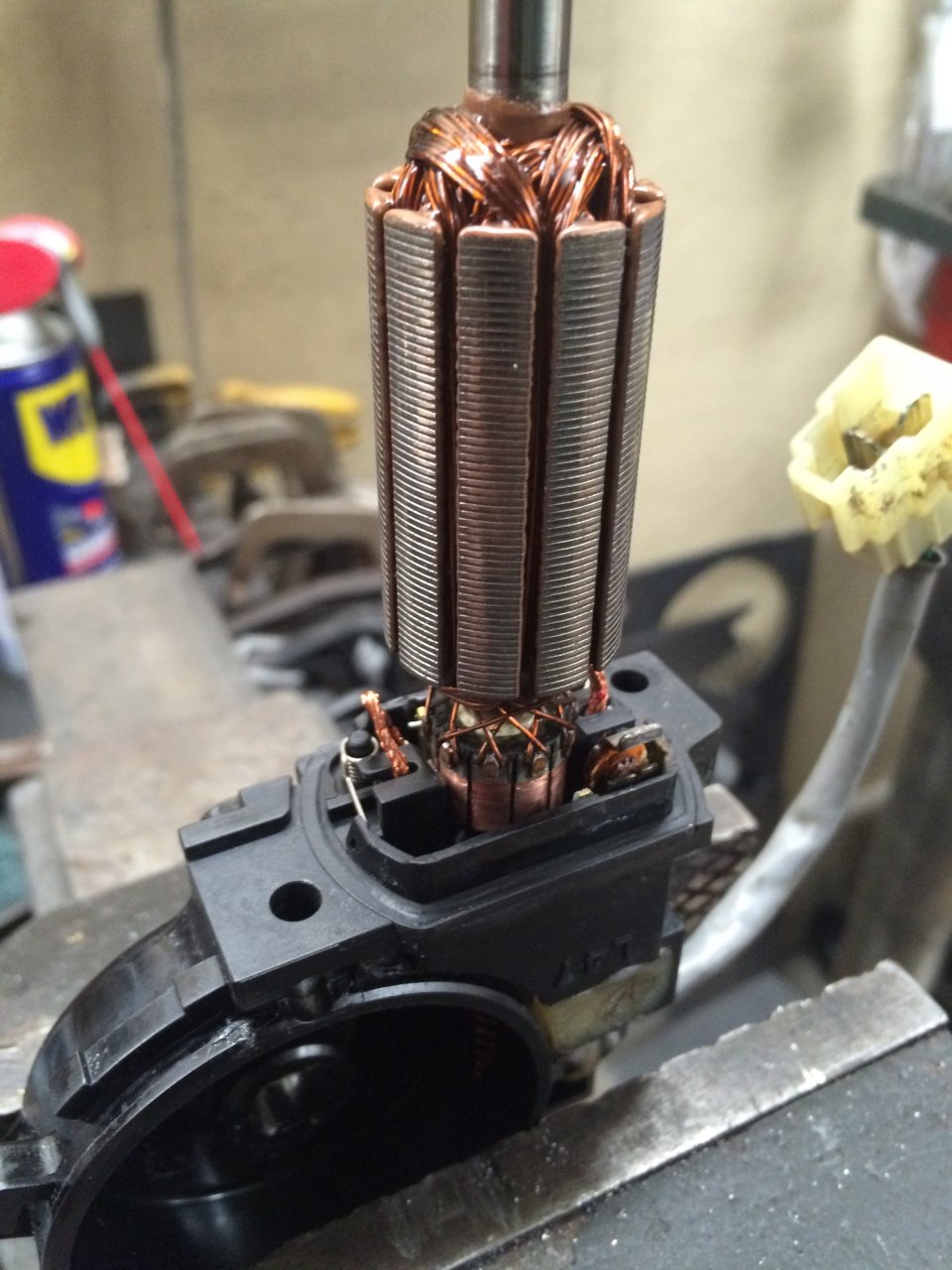 I also cleaned all tracks, spring, guides and rollers with brake cleaner. Then sprayed with the lithium grease. 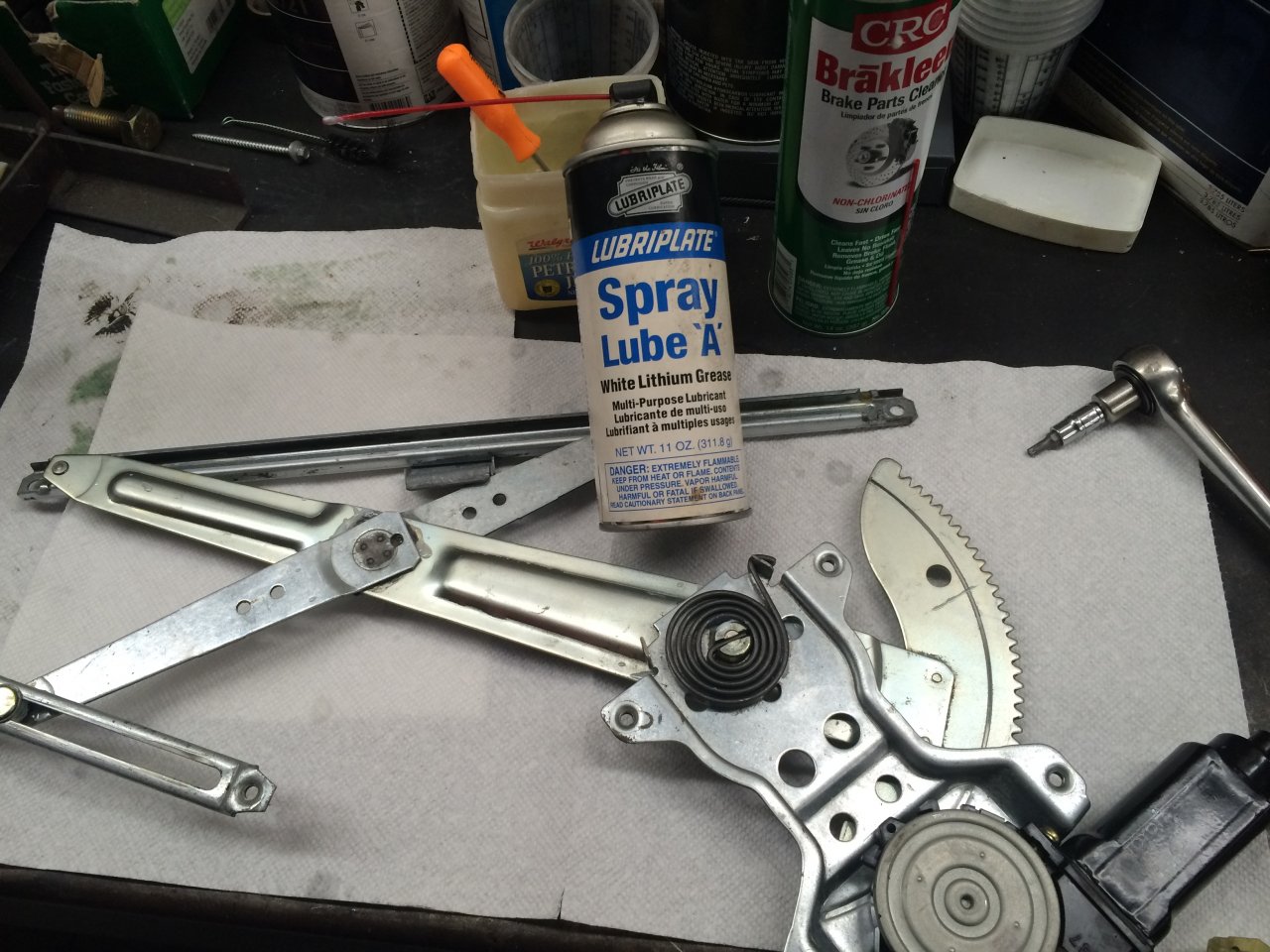 Now just install it back into the door. To get the assembly closely oriented to the way it was removed, I plugged the motor into the electric plug and lowered the gear assembly almost all the way down before installing it in the door. While the window is still up, I sprayed silicone oil down the runs to help the speed as well. Manually raising and lowering the window through the window runs also helps before bolting it in.

That's all I did. As you may have noticed from the video, new window runs would make the operation smoother, but for now it works.
Last edited: Feb 23, 2015
R

Very nice. I will have to do that when it's warmer.

Good writeup, adding it to the list for this summer
R

Thanks for the write up.

This is awesome! Tagged so I can do this when the weather warms up!

awesome.. mine is only bad when it is cold.

You mention getting rid of an o-ring that's likely not needed unless you're in water that deep. I imagine it's needed either way since rain water could be inside the door. Hence the reason for the vapor barrier and drain holes in the bottom of the door. Just my thoughts. Great write up though.

Nice! I will definitely be doing this in the spring.

After viewing the video, I feel confident that I won't be doing this since my windows are about the same speed

Nice. Compared to my windows, those go up like rockets

Don't they make an electronics version of parts cleaner? I guess I assumed the brake parts cleaner wouldn't be good for this. I definitely need to do this but I'm dreading it.

Thanks for the great write-up. This is now on my list of things to do.

iptman said:
Don't they make an electronics version of parts cleaner? I guess I assumed the brake parts cleaner wouldn't be good for this. I definitely need to do this but I'm dreading it.
Click to expand...

Yes electrical cleaner is made. I would not use brake cleaner on these parts.

New window runs did a lot for mine. Still slow when it is cold, but not broken slow.

Excellent write-up! I'll get on this when the weather breaks!

Thanks guys for the compliments. I thought this could really help everyone out. Btw, I retested it yesterday at 20 degrees instead of the original 40 degrees and it slowed down to 10 or 11 seconds. Still working great.

@Dubbinchris, as far as the O-ring is concerned, the gear assembly is mounted very tightly with a stainless washer and grease on the back side. I really can't imagine moisture vapors getting through it.

If anyone thinks they need a new window motor, I would recommend this procedure instead of buying a new one (for example):
http://www.toyotapartszone.com/oem/...er~window~regulator~front~rh~85710-60010.html
You must log in or register to reply here.

Fixing up the “The big Ox”

Resealing oil pan, any tips/gotchas? Is this the right next step?

Fix as RHD or convert to LHD