I've been scanning this site for awhile, both at home and abroad just waiting for an FJ40 to drop some dough on and throw in my garage. I finally found a one owner, 59,000 mile, 1977 (11/76 production) FJ40 in Freeborn Red. The previous owner had used it sparingly over the past couple years with a snow plow attached, but it mostly sat in the out-building. Typical rust in the rear sill area and when I got it home and pulled the factory floor mat, some rust holes between the trans tunnel and drivers floor pan, but the passenger side is mint, as well as the rear bed. The front doors are slightly bent at the top from a garage roof cave in from heavy snow, but the roof panel was replaced. It took a little to start up and drive, but I had it flat-bed towed home to be on the safe side.

Plans for the immediate future are fuel system overhaul with new lines, filter, and carb overhaul (been watching Pinheads videos and have a Hygrade 791B kit on the way). Partial de-smog to get some of the clutter out of the engine bay, Cooling system overhaul with new hoses and water pump (leaking at the back seal), and then tear into the brakes and steering components since there is a lot of slop in the steering wheel, then when money permits, go OME suspension. Just trying to make it a safe driver before tearing in the body work.

Since you all love pics, here are a few: 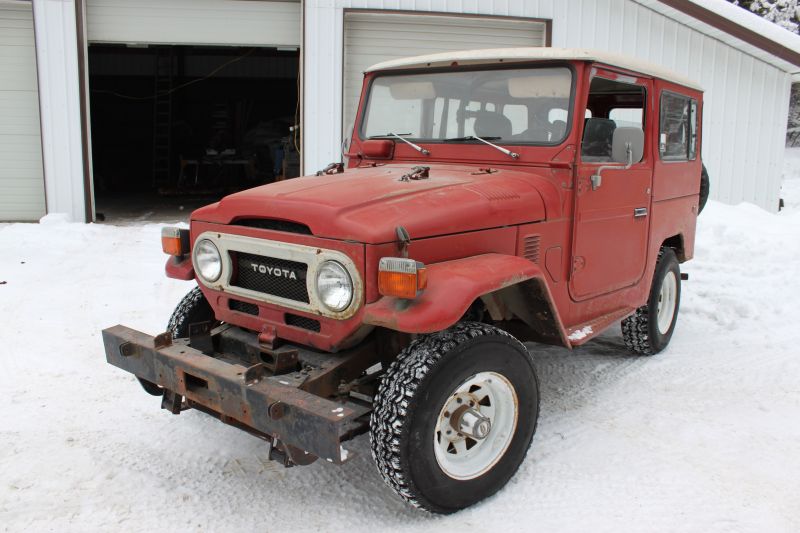 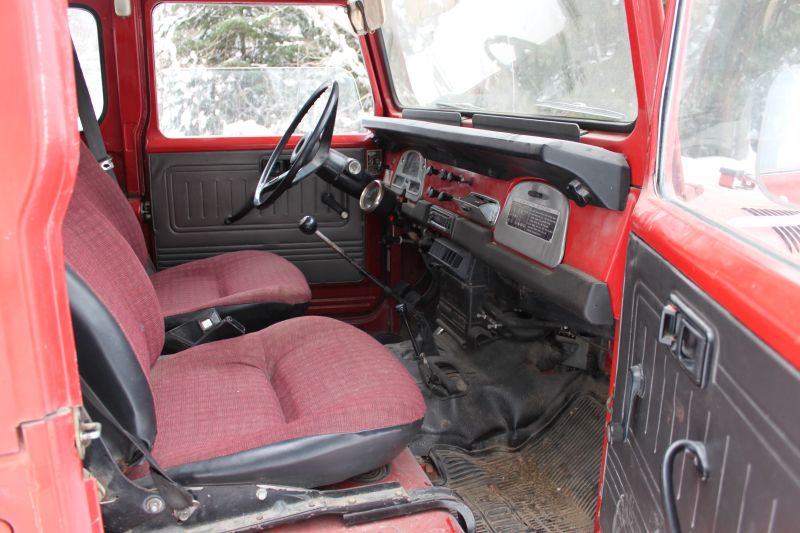 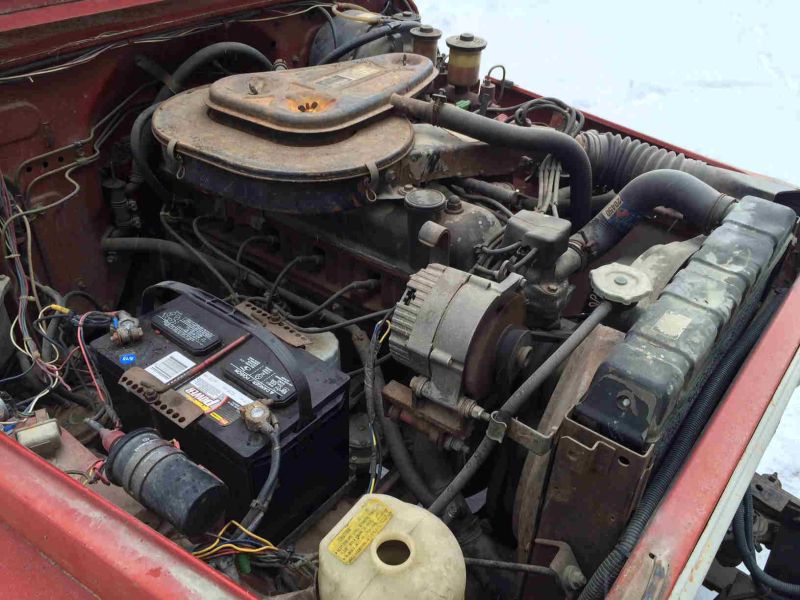 Port options sticker on the inside of the Glove Box door, anyone seen this before? 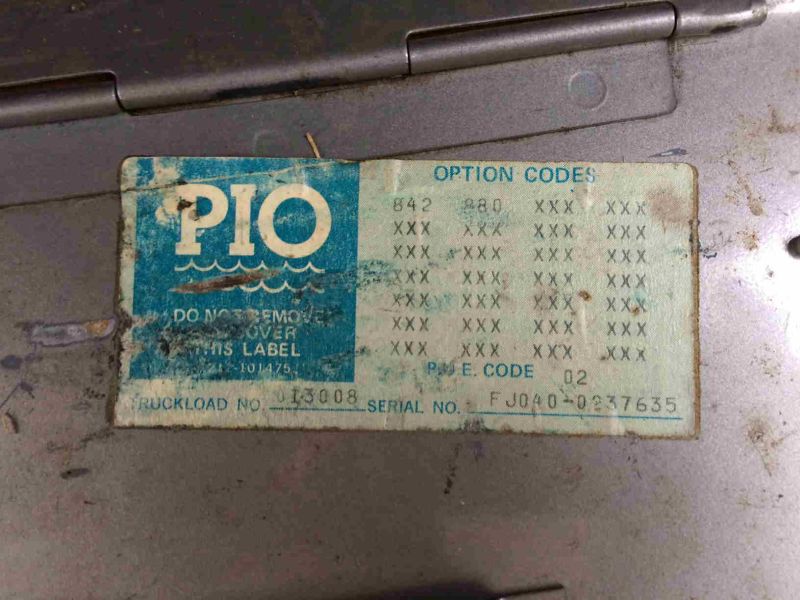 Finally home in the garage, in fine company... 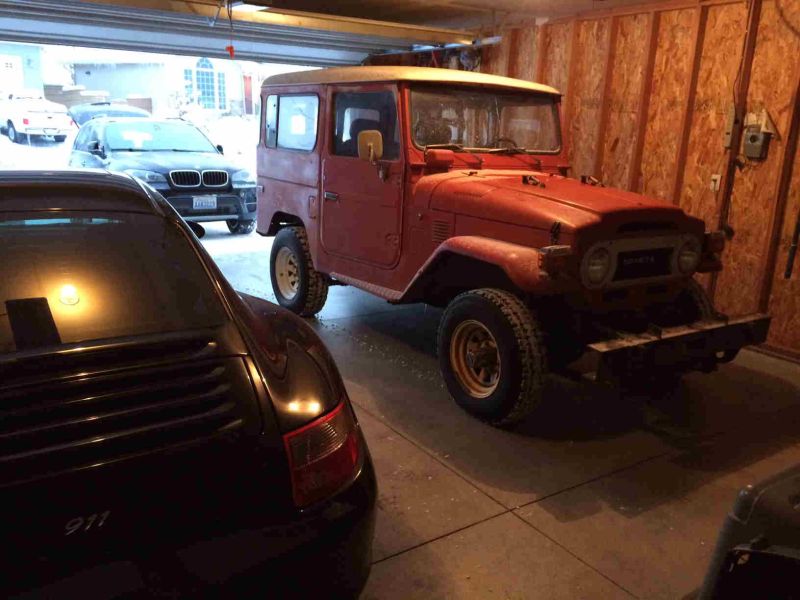 A little wash 'n wax and drive it! It'll tell you what it needs-
Very nice!!
When you come to a fork in the road- take neither-make your own fork-you drive a Land Cruiser.
77 FJ40-stock except the Headers and Weber
Hand Throttle, GR Starter
M101A2 Trailer

Thanks everyone! All your build threads have been an inspiration! Already started the tear down last night! Carb removed and removed passenger side seat and exposed down to the fuel tank and lines. Pics coming later.

GHalll : yes, he bubba'ed the alternator bracket to run a single wire alt to run the plow.

So I guess not so slow and steady; Passenger side seat and tank cover removed for hose replacement, air cleaner assembly, carb, intake and exhaust manifolds removed and most of the air pump/egr system. Broke a stud on exhaust manifold where the EGR pipe attaches on the bottom (hopefully I can extract it), other than that no issues other than the air pump is stuck on the pivot joint and I can't get the bolt out yet.

Trying to get a good amount of stuff to blast at the auto hobby shop on base, they said they are using aluminum oxide, so hopefully that's not too aggressive.

Maybe this is why it was having issues starting? Lack of clean air? 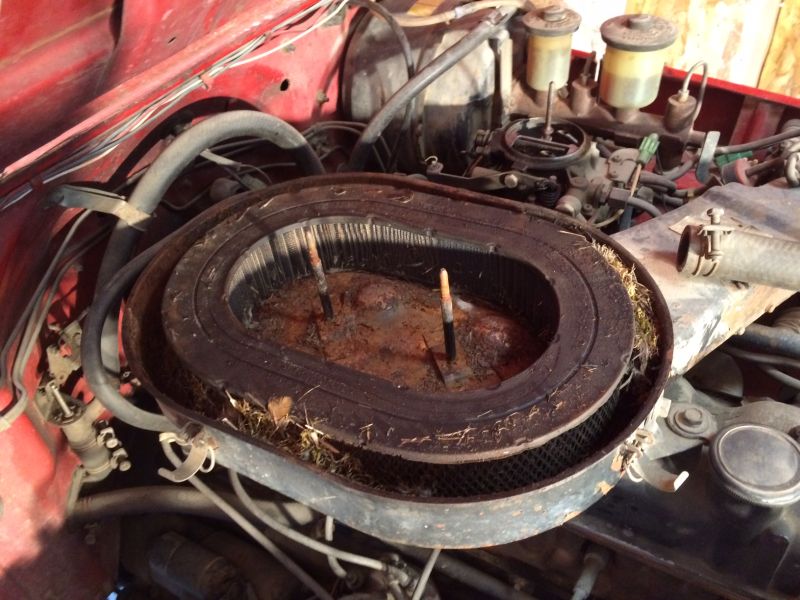 This is definitely getting blasted and refurbed!

Pretty clean looking tank! You can see the rust on the driver's side floor-board! Arg... 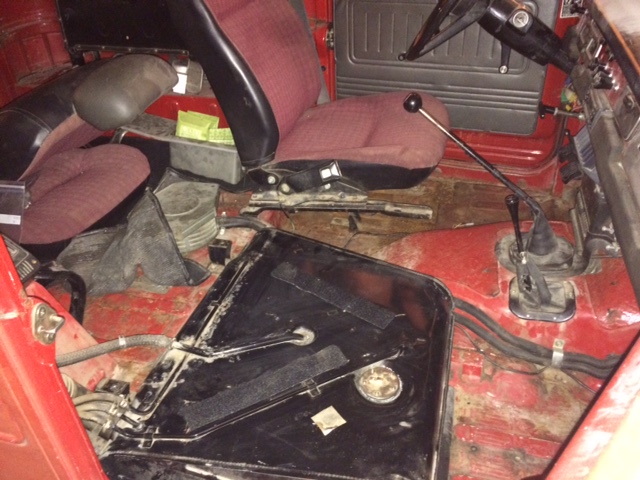 Here's the rest of the parts and engine bay progress. 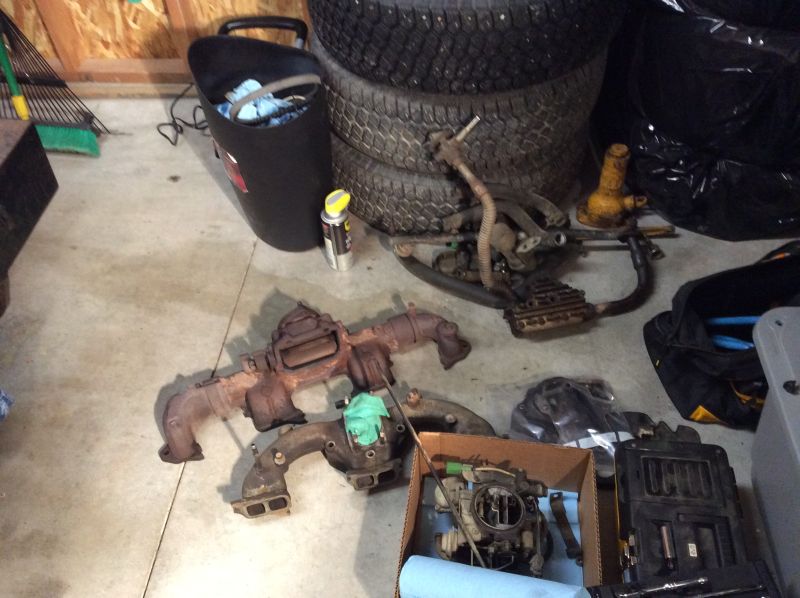 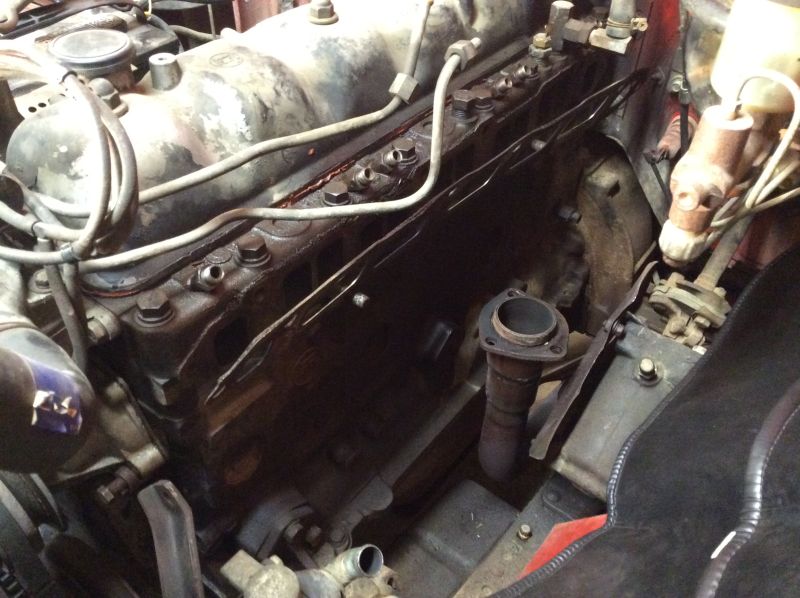 My Freeborn Red 77 had 2.3 miles on it when I picked it up in Las Vegas. Good luck on your build/restore. I have spent a lifetime (38YRS) enjoying mine and I still get a smile on my face when I drive it. I will only give it up when they pry my corpse out of it according to my kids.
original owner 77 FJ40; 1968 FJ55; 2007 Silverado

Got around to replacing all the emissions lines behind the gas tank and also the rusted out fuel filler neck, hose, and gas cap. I've read the bad reviews on the CCOT tank hose and filler neck, so we'll see what happens! Next up get the lines going to the fuel pump/filter and charcoal canister. Received my Hygrade Carb Kit and picked up a can of Berryman's Carb Dip to knock that out this week.

Waiting for the weather to warm up so I can blast and spray some parts, or check with the local powder coater for pricing.


Note to self, don't put 10 gallons of gas in the tank when you know you're going to be working on it. You can also see the years of dust being wiped away and potential rust areas! 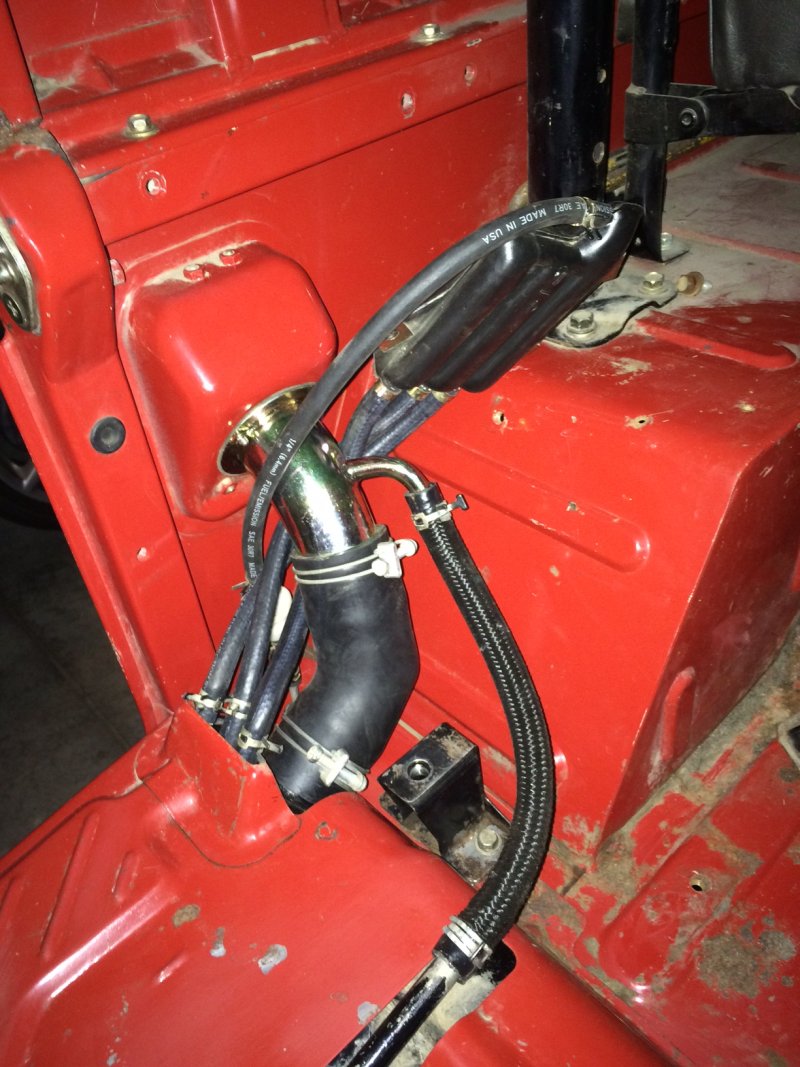 I have a 82 and looking for a place that sells fuel lines online and other items related to the fuel system.

I found a fuel evaporator online that I bought used as a new one is NLA as I recall.

Carb re-build complete. Props to @Pin_Head for his outstanding videos! It took me awhile to figure out the linkage to make sure it was turning the right way, but overall it turned out pretty good. 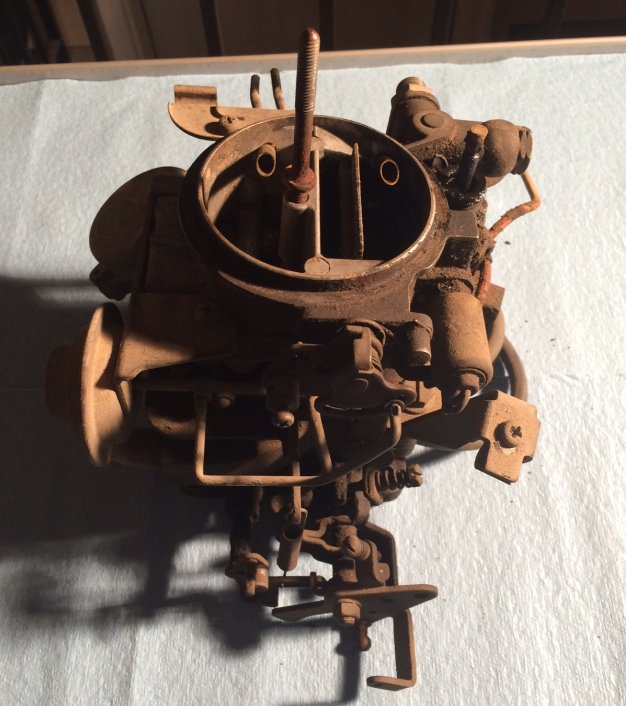 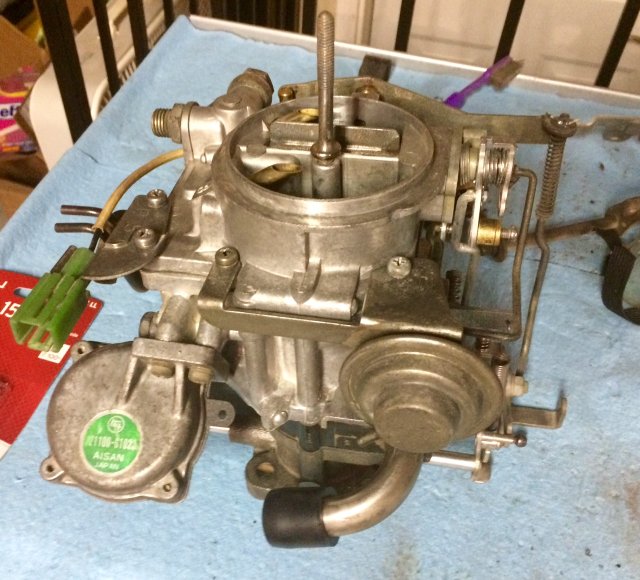 Continuing to chug along with the tear down and refresh. Got my exhaust manifold back from the local machine shop since I broke one of the EGR studs off and couldn't get it out. So they heli-coiled it along with 2 of the exhaust flange studs which I had them remove. I got all new studs from SOR. Need to figure out if I'm going to blast and paint it or go for some other coating.

Picked up another '77 wiring harness since mine was fried, thanks @GA Architect for the link. Now just need to clean it up and swap some connectors that were brittle/broken on the new one.

Drained the coolant from the radiator and removed the shroud/fan/pulley in anticipation of replacing the water pump and hoses. Dropped off a box of parts at the powder-coat shop... whew.. 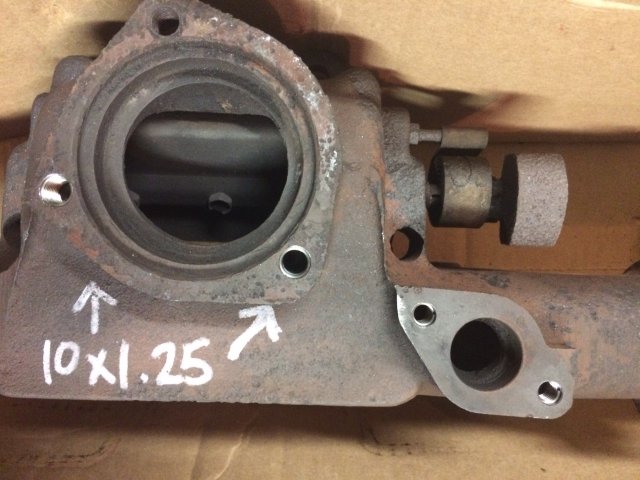 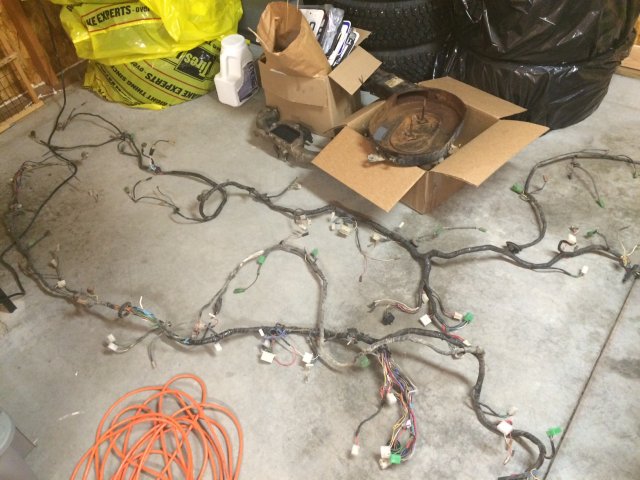 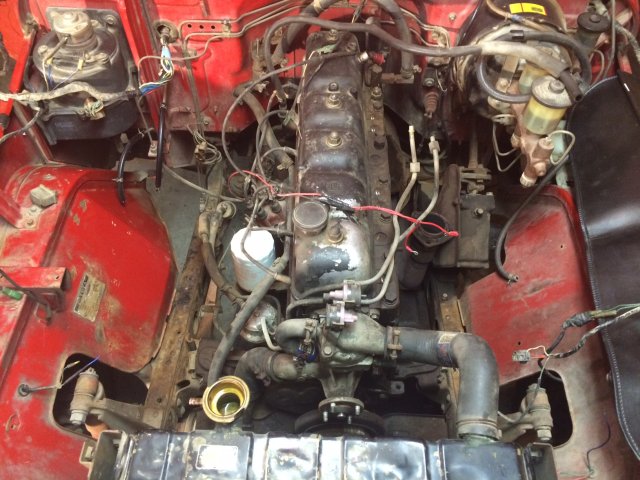 And I'm confused about this one... I don't think the nut on the harmonic balancer is supposed to look like this? Thoughts anyone? 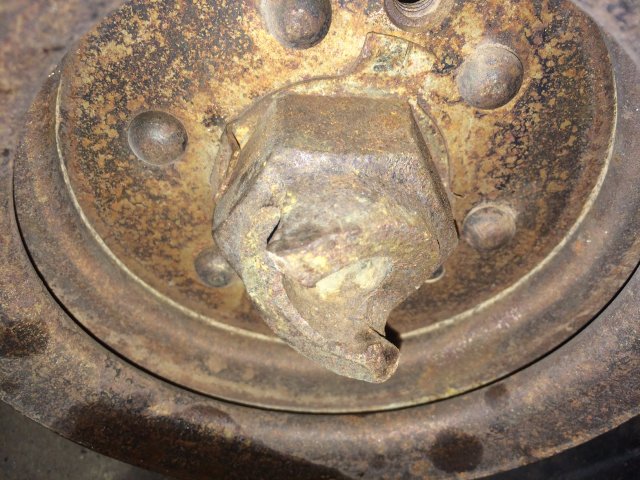 Take a better pic of that claw nut from the front - looks like it's been smashed a bit ?
Btw- the claw nut is stock , as Chappo said...
Sarge
Vessel Tools and JIS screwdrivers

Water pump and thermostat housing removal time. In hindsight, I should have drained the coolant out of the block drain prior to unbolting the water pump, live and learn I guess. At least I still had a tub underneath to kick into place. Looks like the PO decided RTV was a better gasket to use. The only issue I had was separating the thermostat housing, I couldn't get the bolts to budge! So in one piece it came off. Now, I need to figure out how to separate them!!

Also here's a better picture of the claw nut. 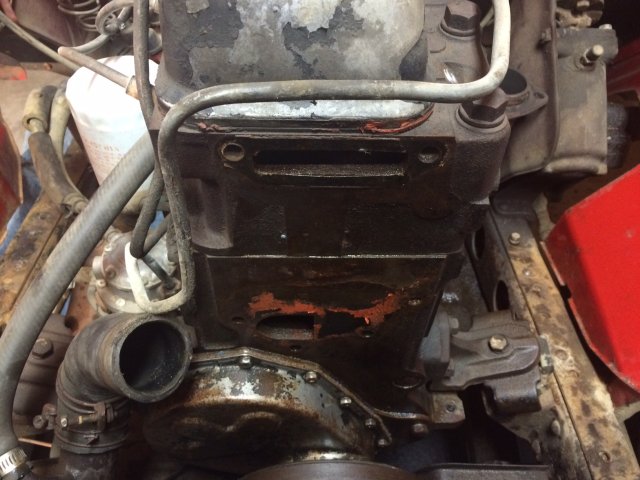 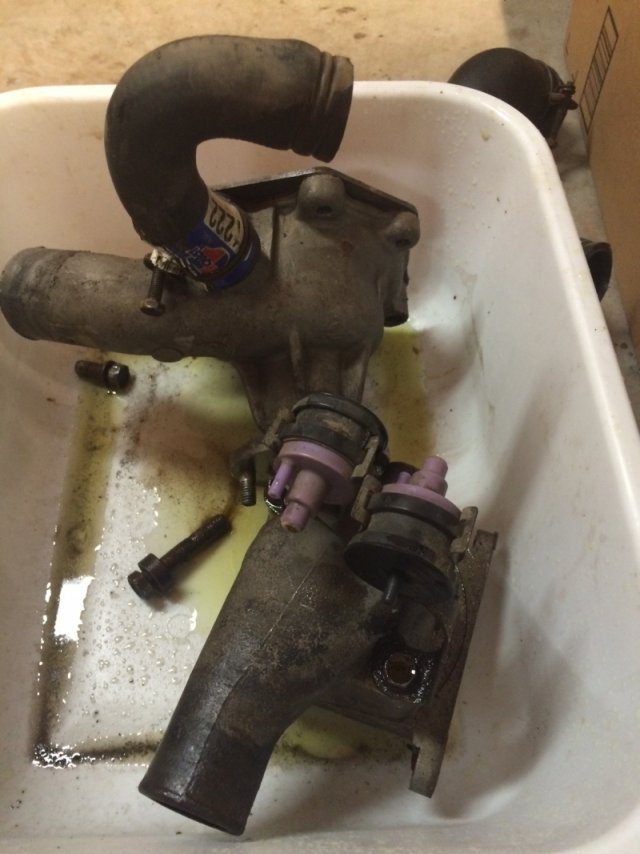 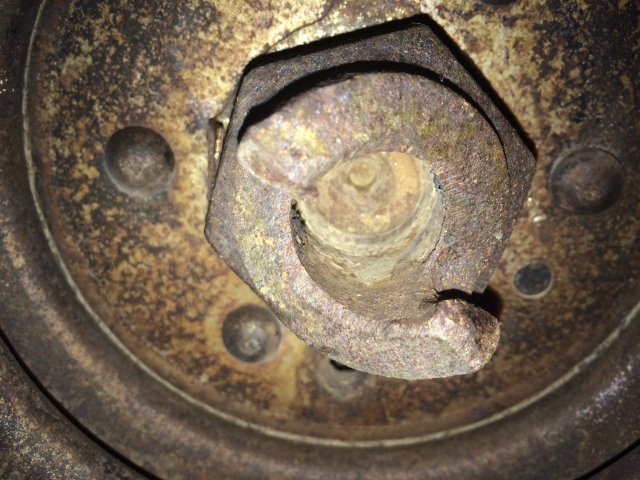 Unfortunately it looks like someone beat on that claw nut - the ends should have a clean blunted point to them , hard to tell from pics . Those are stock , as said before .
Get some Aero Kroil - it will help with stuck bolts or use heat and paraffin wax .
Sarge
Vessel Tools and JIS screwdrivers
You must log in or register to reply here.