The Rebirth of Jillian

As I start to move forward on my never ending Cruiser project (named “Jillian” if you didn’t catch that yet), I realized that I have never done a build thread on her. I have posted threads on projects I have done but I’ve never actually had a build thread. I figured why the heck not?!?

The first part of this may be a bit boring but I’m going to start at the beginning. My 80 is a 1997 40th Anniversary Edition that I bought in early 2005. She was locked and had 125k miles on her. The price was perfect and she was exactly what I wanted… The first things I did was pull off the running boards and take it wheeling!

I installed a CB and Alpine head unit and did the best thing ever: Joined TLCA and Cascade Cruisers.

Next stage was the addition of OME “J” springs with “L” shocks, removing what was left of my fender flares and pulling off the roof rack:

I then stepped up to 315 Toyo MT’s on a narrower steel wheel… With all of the capability this thing has, it wasn’t long til I was putting it in places it didn’t belong. And the body started showing it:

I finally picked up a set of MetalTech’s sliders… And the beating continued:

I ended up rolling some bedliner on the sides of the truck to cover the holes left by the trim.

And continued to beat the snot out of my poor 80!

After breaking a couple of birfs, I ended up buying Longfield’s super set and regearing to 5.29’s with the help of a fellow club member. I also got some custom plates and an anti-j**p sticker as a birthday present from a good friend.

LT at MetalTech was nice enough to spend a day with me and build me a custom one off bumper. And I painted the grill black:

I then decided to follow Mark’s example and copy his MetalTech Style fender cut. I opened the front fender up 3”s and trimmed up the rear as much as I could.

I also hacked the rear ¼ panels so that they were the same as the tailgate:

While the tailgate was off, I cut a big hole in the back and reinforced it with angle. This gave me a nice place to store stuff and took care of the tailgate bowing from weight:

After ripping my exhaust off multiple times (and eventually just running a turn-down after the cats), I finally had an exhaust built. Ed’s in Beaverton did a beautiful job using a Magnaflow universal cat and a Mk5 GTI resonator as a muffler:

I added 1.5” wheel spacers from All-Pro all the way around and upgraded to Tundra steel wheels:

Not long after, I upgraded to 37x14.50x17 bias Iroks on 17x8 steelies… Mounted in my driveway with a little help from a buddy:

Passed my amature radio license and installed my 2m radio:

The next project was a storage / sleeping platform. This was built with random 2x12, plywood and steel I had lying around the shop.

My Dad and I went one to design and build a trans crossmember and trans / t.case skidplate. We have since built 4 more and they are amazing!

After talking with a buddy from Timbercrawler.com, he designed and punched me out a set of beadlock rings for my wheels. My loving girlfriend helped me get them all together.

I finally got around to replacing my bent suspension pieces with new / better ones:

It is at this point I did my most expensive modification of all time… I bought a 2005 Dodge Ram Cummins and a trailer!

With the addition of the tow rig and trailer, as well as my daughter, I have entered into a new chapter for Jillian. My Dad always wanted to have a rig for the two of us to go wheeling with and he never got to finish one until I was graduated high school and had a wheeler of my own. His regrets that he let life get in the way and that we never got the opportunity to have a rig that we wheeled together, worked on together, etc. Sure, in a perfect world that would be a 40 but this is what I got. I will not that that opportunity pass me and my daughter by. If she gets older and could care less, then I will deal with it but I have to give it a chance! On that note, I have decided to document “Stage 2” or the rebirth of Jillian…
T

Wow, you certainly beat the snot out of it
Great stuff

how much would your buddy charge for a custom rock rings

I want to say the full set of rings for my locks were $150 but he no longer works where he was working so I don't think he is making them anymore.

Look forward to your progress and wheeling again with you and your fam! 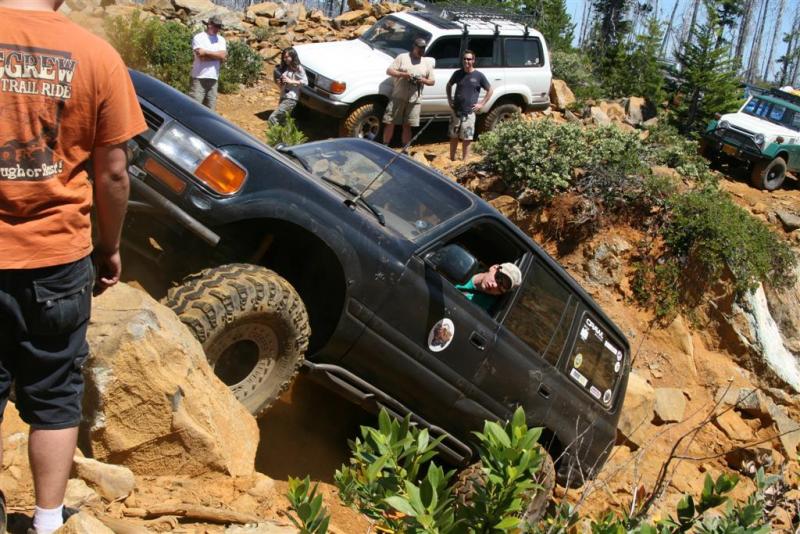 wow, you are NOT afraid to wheel the crap outta that 80, good on yah! Isn't it amazing what these seemingly mild-mannered rigs will do? Good thread

Can't wait to see what you have planned for that Hottie next Chad!

A Cruiser that gets used.

All I can say is that it's a Land Cruiser.
Just shows you what these trucks can take, love it.

Awesome! I really like all the ideas seen in build threads.

Feel free to steal any pics you would like!

It is true, I bought the 80 to wheel. It was my daily for about a year, then it was always a second vehicle. I am not afraid to use it but it's getting to the point that future mods are difficult with such a beat body.

My biggest issues with my 80 that I would like to address in some form:
1) Lack of gearing. I think that is the biggest issue in regards to the 80 series.
2) Rear overhang. I drag it everywhere and the rear 1/4s prove it!
3) Weight. I have come to the realization that this will not be overcome but I want to be mindful of it.
4) Too much unprotected body. The problem is if you go too far protecting, I start violating #3...

Well weight will be hard to beat, you havnt cut rear bumper (frame) yet. You could chop some off there. only way to get weight down and to protect it is to get rid of it. Bobbing or chopping top only solution i see. Which is only a solution to some.

It very much is a solution, I just need to be careful how I do it for a couple of reasons:

1) It's really wet in the Pacific Northwest and I don't like to be wet and cold.
2) My daughter will be in this thing with me, safety needs to stay top priority.
3) Did I mention it's really wet out here?

There is another direction for weight loss, different power train... LS1, 302, 4.7, any of them should knock 2-400 lbs off your rig. Actually that auto is an anchor as well, Im pretty much positive its about 50 lbs. heavier than the nv4500hd off the back of a cummins...