I figured I would start a separate thread instead of filling up the "What are you working on?" thread on my journey to resurrecting the "totaled" Rav4.

Just as a refresher a few weeks ago, some unfortunate events and life lessons happened. After a good night out with friends we arrived home to find a shelf in our garage that had paint on it had fallen and landed all over the front of our 2005 Rav4 L (and my snap-on tool box):

My first reaction is "Oh My God", then my second reaction was not internet appropriate but something along the line of "

", and then final reaction was "Honey, get me your keys I'll take it to the car wash right now."

So I took it to a local carwash and got as much of the paint off as I possibly could:

From there, that is how it sat, outside... In the sun, since I couldn't get it back in the garage. I called homeowners insurance first to see if any damages would be covered. After waiting a few days, I finally got the word that homeowners was not going to cover anything, well more

language came out. But then I was advised to file an Auto Claim since I did have full coverage on the vehicle.

So earlier this week I dropped off the vehicle to get an estimate, and this is the condition I dropped it off in:

After waiting a few days, the insurance company contacted me to tell me that they were going to total the vehicle. Which was a) not what I wanted to hear and b) absolutely ridiculous.

So, after discussing it with my husband, we agreed to just withdraw the claim, pick up the vehicle as is, and perform the repairs ourselves.
We picked up the vehicle today, and it was exactly as I left it, not even an attempt to see if the paint would come off was made, this already sent my temper to a place it need not go, and made me question exactly what the insurance was thinking. From my deductions, they based their entire assessment on the peeling paint of the hood, saying that the house paint was acting with the cars paint and would probably take it off where ever else it landed:

Now, the vehicle is 14 years old, and has 125K on it, one would think that after that many miles being driven, the hoods clear may be close to gone if not completely gone, so its a good possibility that as the house paint came off it took the car paint with it.

After getting the car home I got to work, brought out my pressure washer and scrapper and started to go to town on at least the windshield and headlights so we could drive the vehicle while I think of my next course of action. I call this Phase 1 of the resurrection:

I pressure washed the car and most of the paint started to come off, the wheels are practically back to brand new, I need to scrub in some spots but they are back. Then I worked on the windshield, using glass cleaner and a scraper with a razor blade to start peeling the paint away, and practically back to perfect. Then I started to do the same on the head lights and right front fender. After I got as much paint off ass possible (almost all) I started to wet sand the headlights and the right front fender. Once all done I 3 staged buff the headlights and the right front fender with awesome results. Not perfect, but honestly for a 14 year old car it was not perfect to begin with. This all took me about 2 hours....

I will be picking up new wiper blades tomorrow so that my husband can start driving it again till I decide on what phase 2 of the resurrection will be.

Phase 2 will most likely consist of continuing to get any remaining paint off the painted surfaces and wet sanding and buffing the entire vehicle.

I will also be looking to ways to possibly clean up the black plastic trim pieces, maybe soda blast? Not sure but if I can do that then I will paint them in a fresh coat of black paint, hopefully that will make the truck pop again.

Additional phases will include new sport hood, pulling the bumper to get it cleaned and painted with the hood, replace the fender flare gaskets, and figure out how to get the a-pillar dent fixed.

Got a dent tech or dent wizard that dose work for carmax?

jamarquardt22 said:
Got a dent tech or dent wizard that dose work for carmax?
Click to expand...

We do have associates that know how to do PDR and we do use Dent Wizard. However, I can not have my own car worked on at work, and I like dent wizard, but I am not sure what their pricing is outside of Carmax.

I have also been told that the dent on the a-pillar can't really be pulled out easily since it is a structural component....

Hey, splattered paint on automobiles is the latest rage... 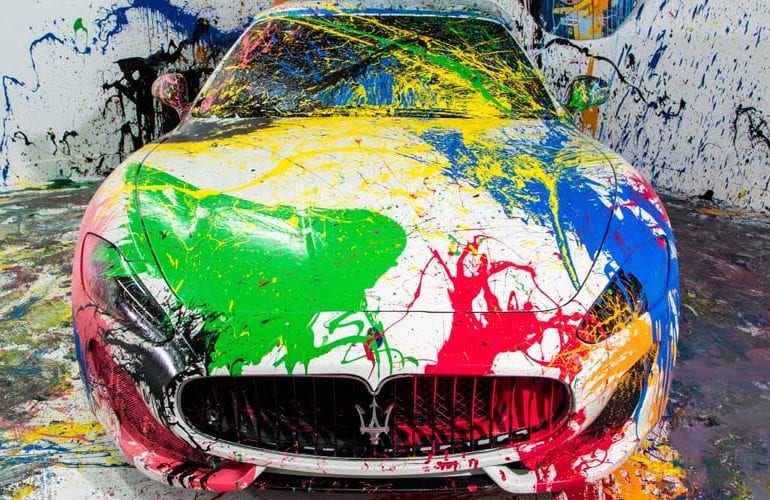 Not for me, and yikes!! That's an expensive car to do that too

Leave well enough alone, maybe someday paint the trim when you have time to take it apart.
Move on to the garage.

How has @Crusha not suggested this thread be retitled to Raverection yet?

JohnVee said:
How has @Crusha not suggested this thread be retitled to Raverection yet?
Click to expand...


Because I still haven't found my pacifier and glow sticks...

This is actually pretty close to what the walls of my basement looked like when we moved in 10 years ago, except it was only blue and red. PO said he did it in the early 90's. I was a bitch to paint over cleanly. I had seriously considered (gasp!) wallpaper.