Starting to do a 4 door troopy type of thing. Aquala call them quad cab, so I will call it the same. I like the look of their one so heading towards that look, but being in Australia it's price prohibitive to ship that body here otherwise I would.

Started off with a 1984 FJ45 ute in good condition. As I have a few other 40's here I will be sourcing parts from them as well but using the chassis of the 45.

The front will be the ute part as the footwells are in good condition and the rear part will be made from whatever has the best metal or requires the least amount to be cut out. I will be using the 3 wiper screen from the BJ42LX as I have a few 3 wiper screens now and they work a bit better than the 2 wiper screens I've had in the past.

I will probably be adding 200mm (8") into the chassis to allow the rear doors to look 1/2 decent as I'm not too much of a fan of cutting into them too much. The rear doors will be about 3/4's the size of the front ones as it looks better for proportions. I will be using the LX panels I have to finish off the interior at the back with ambulance doors at the rear.

I will be putting a 1HD-FT in the car, from a 96ísh 80 series and running through a 5 speed manual box. That will go to an 80 series rear axle and I will be using a Nissan Patrol GU front axle up there. I have the brackets from a Patrol chassis that I cut up and I also have an 80 series rolling chassis here to grab bits from as well. I will be welding into the rear of the chassis the rear suspension sub frame from an 80 series. This may require some chassis widening but will tackle that when I get to that area.

It will have a hard top, as being in Melbourne you get a fair bit of rain so I will cut down the roof to suit. Being 6ft 4"I sit about 950mm from the dash pad at the front, so there will be some sheet metal between the doors and I plan to leave the petrol (gas) tank filler in that location and also run another tank under the rear as well. I hope to seat 5 in there but also have some fold forward seats from a Nissan Patrol that I might be able to squeeze in between the rear wheel arches, well see but not necessary. ( I have 5 kids so it would be a good camping vehicle).

Hope to be running 35" tyres on there as well and cover them with suitable guards/sliders. Here in Australia we get hammered for any part of the wheel being outside the body of the car and huge tyres. It's a real pain but we have to live with it and move around it where possible!!.

This is some action from my other 40. A LS1 powered, twin locked thing that goes well.
It will probably be a 2 year project as I am no sheet metal worker but can weld stuff together and I figure grind off the bits I don't need or cut it and start again!. Major welding will be done by someone who knows what they are doing as you don't want your suspension bits falling off!.

This is my ute, with dog, photo. 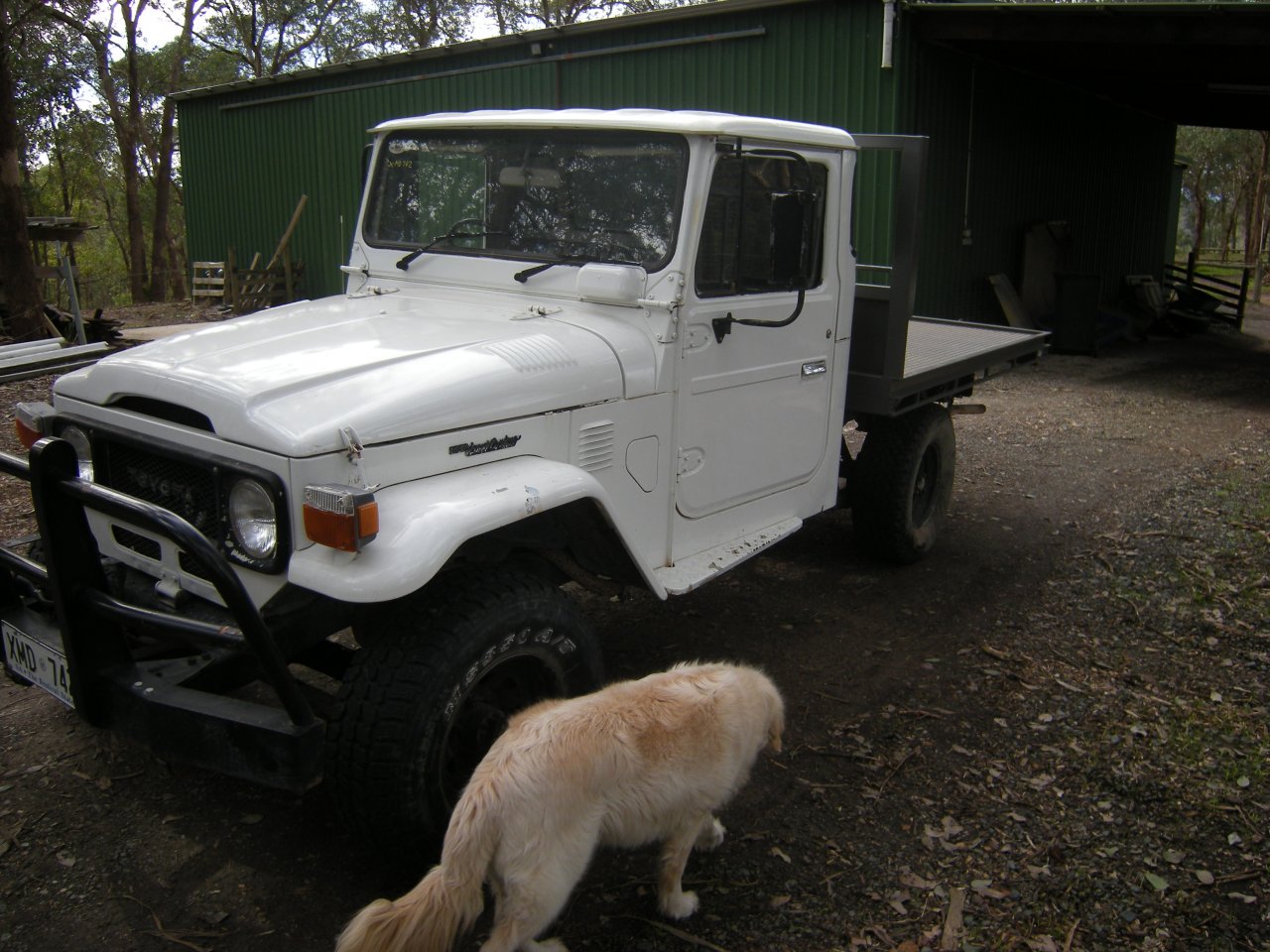 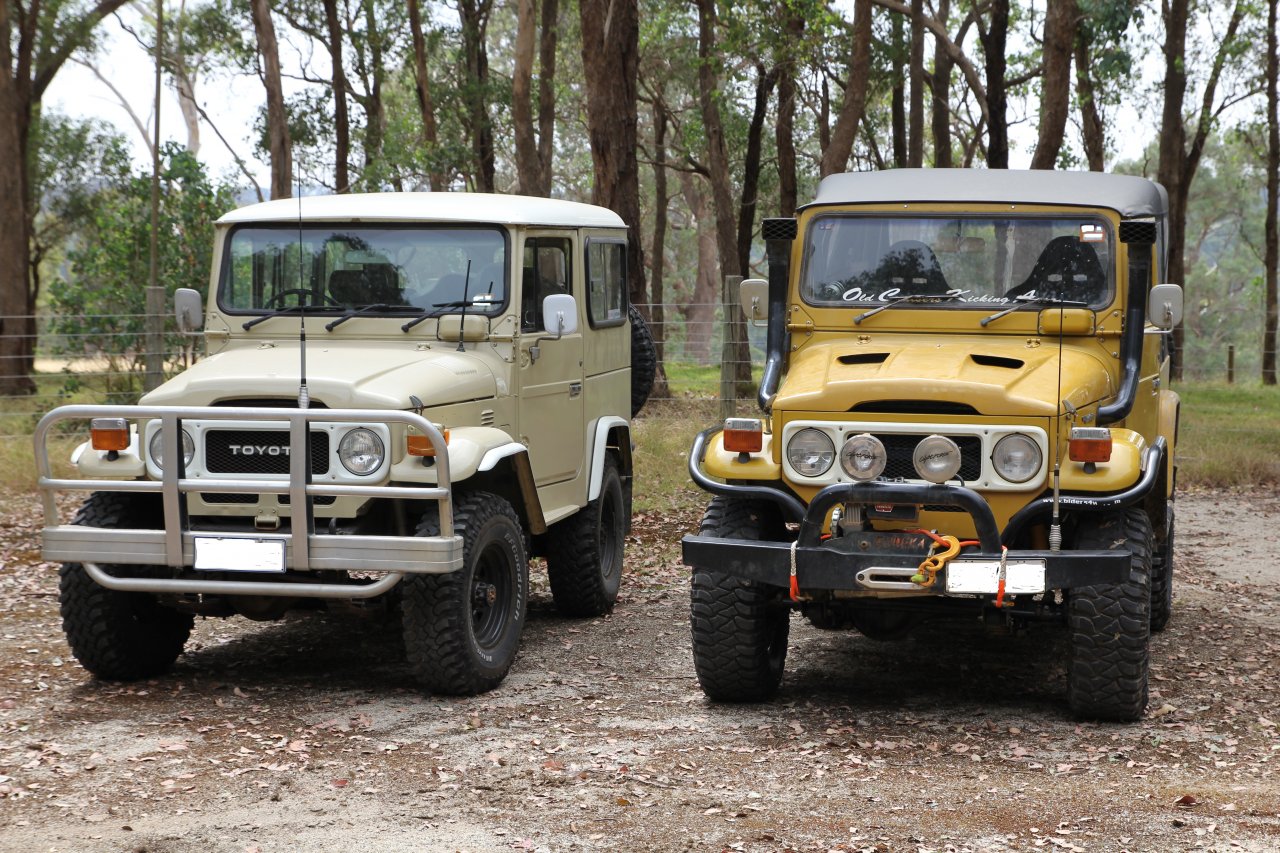 Here is my other donor vehicles, both 1982, one a BJ42 and the other an FJ40 (with black bonnet(hood)) the next chassis number to my yellow one. (A pure fluke that as I purchased it sight unseen with the aim to part it out) 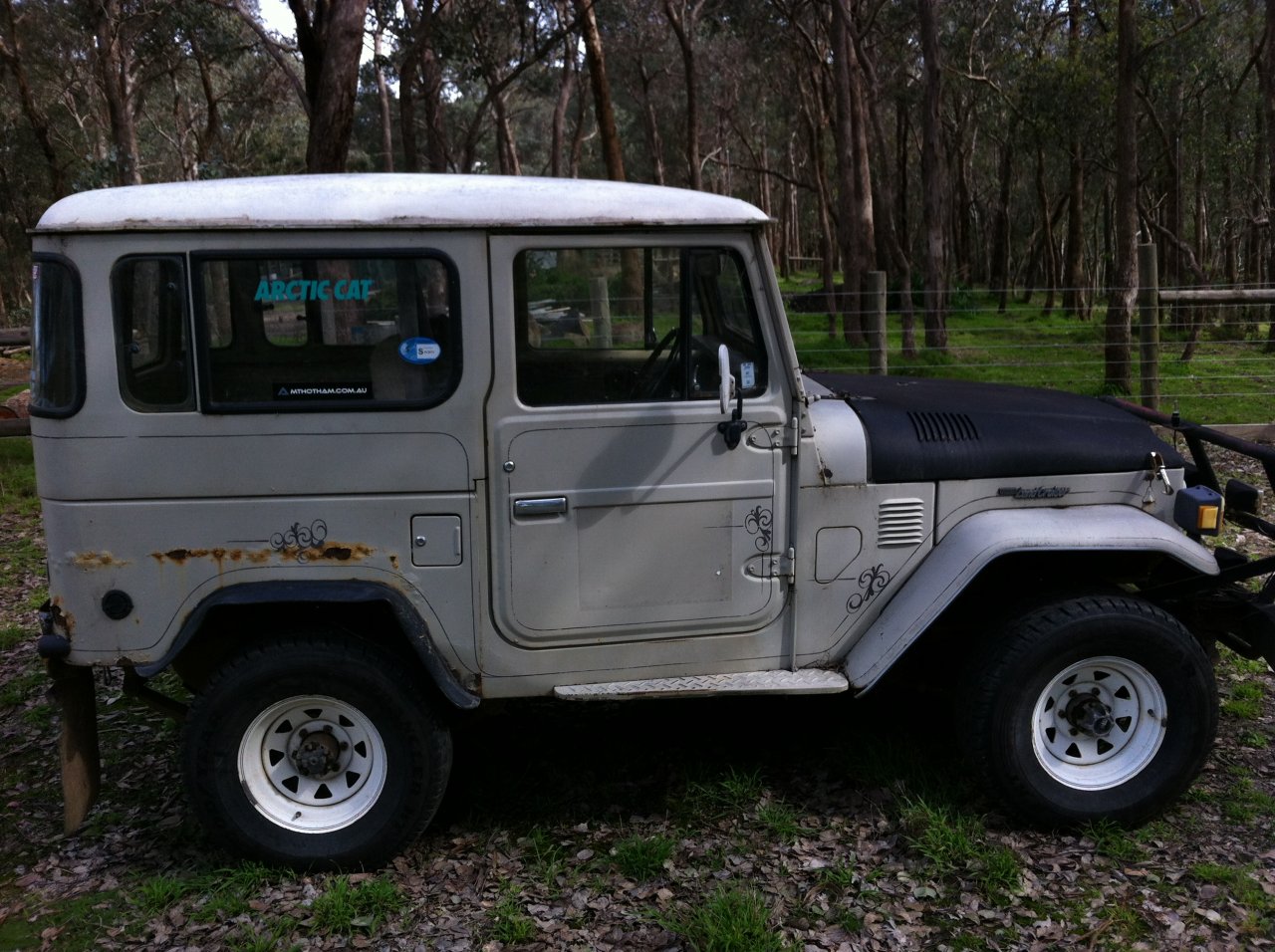 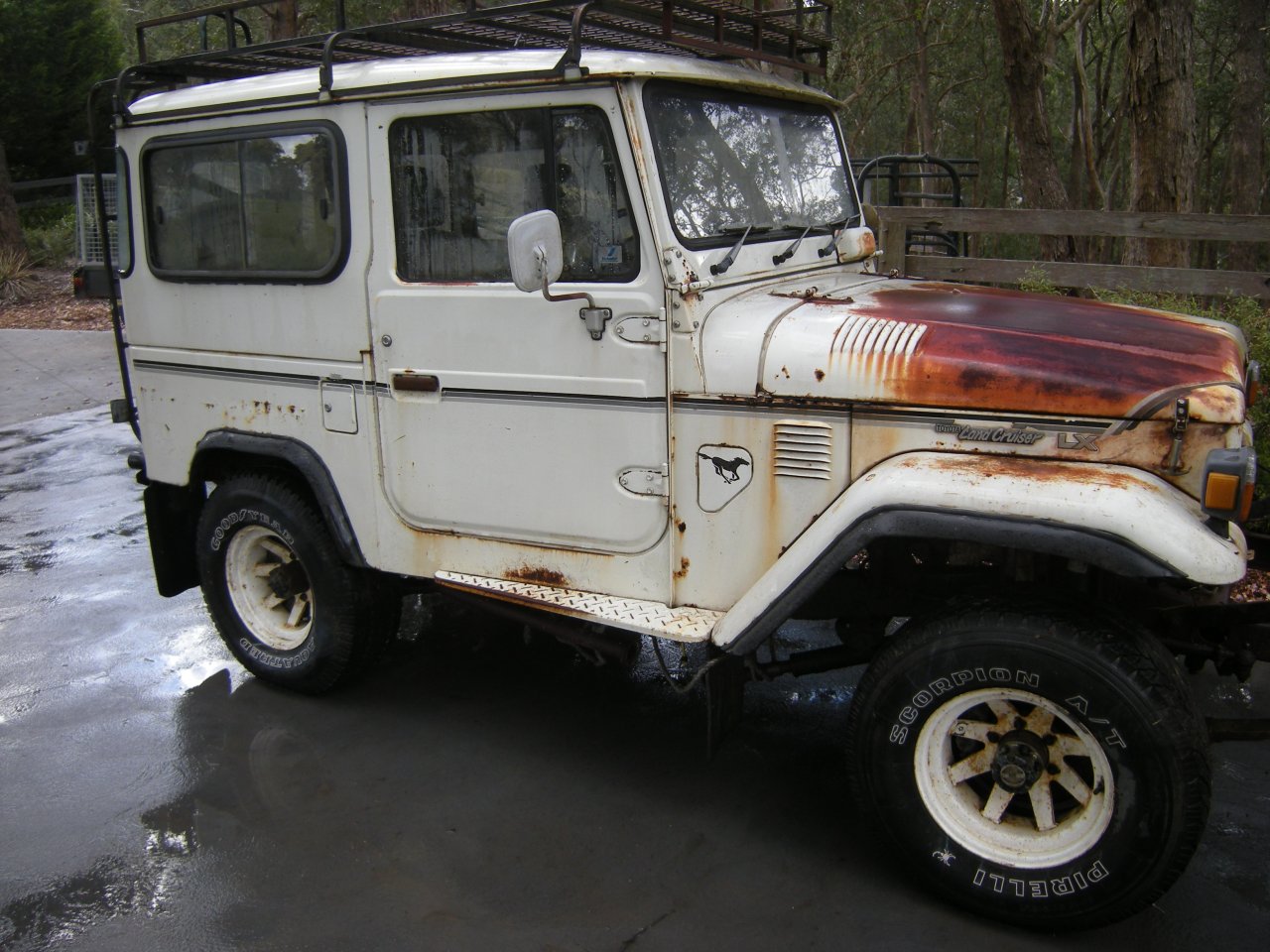 The sort of look I'm going for, except will be troopy style rather than dual cab ute. 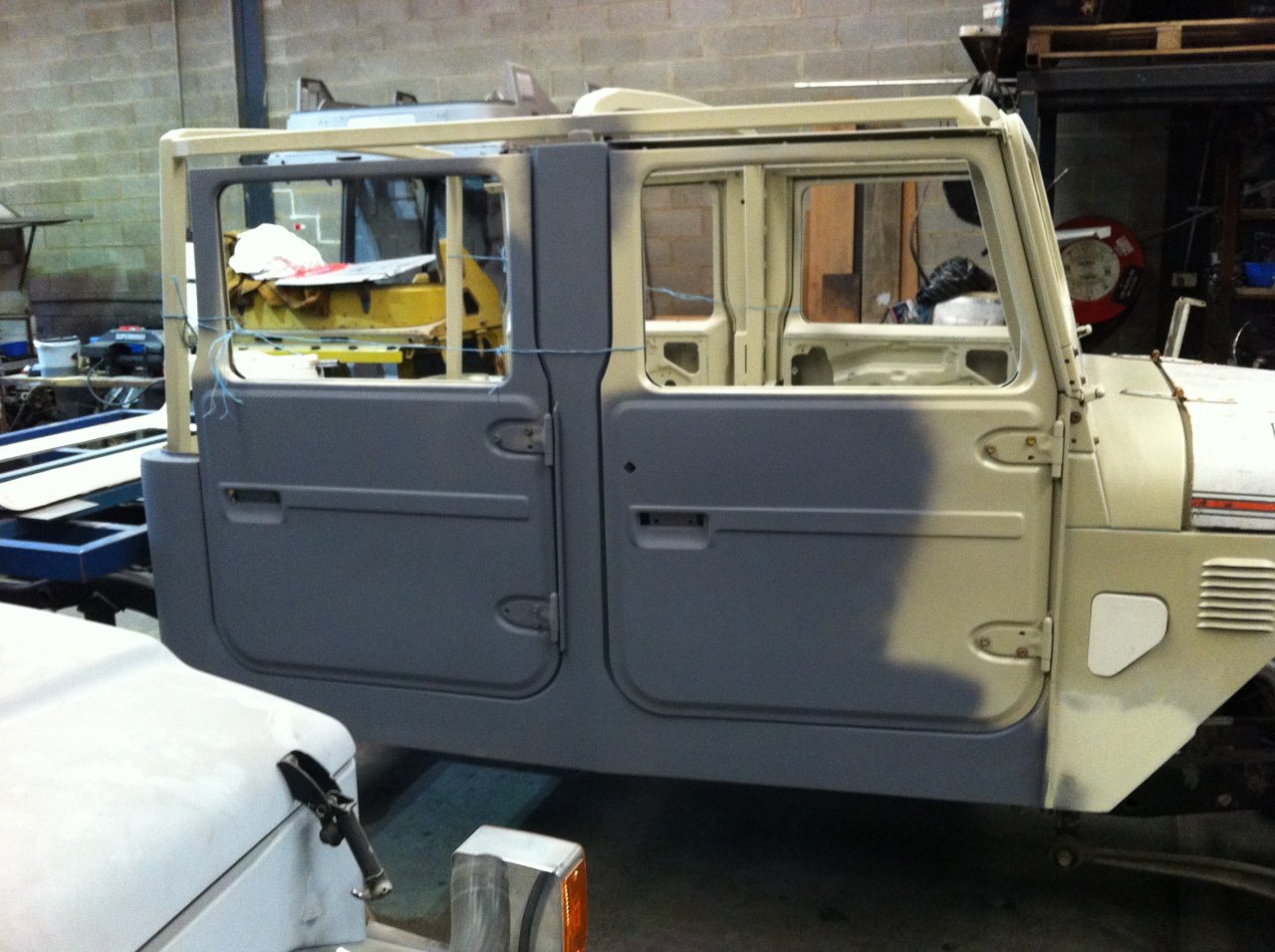 Anyway, enough for now, I had better spend some time with my 3yr old.

Sounds like a great build but its a shame to wreck the LX shorty. There would be people in the US who would give there left nut for that truck.

yes, I agree, but the best panel and only one that doesn't have rust in it is the LHS upper rear. The rest have rust and the chassis is like an onion at a few places.

Sorry to hear the LX is a rust bucket.
Happy to watch it turn into a four door troopy with plenty of room and grunt with the 1hdt engine. Please keep the photo's coming of the build stages.

Yeah mate keep the photos coming its a great idea

Got a bit more deconstruction done today. This ute is in really good condition and the rust has been limited to a few spots on the front bib and a bit at the back of the cabin. Stuff all so far.

Engine out on Wednesday all going well, then strip down to the chassis and remove the bits there. 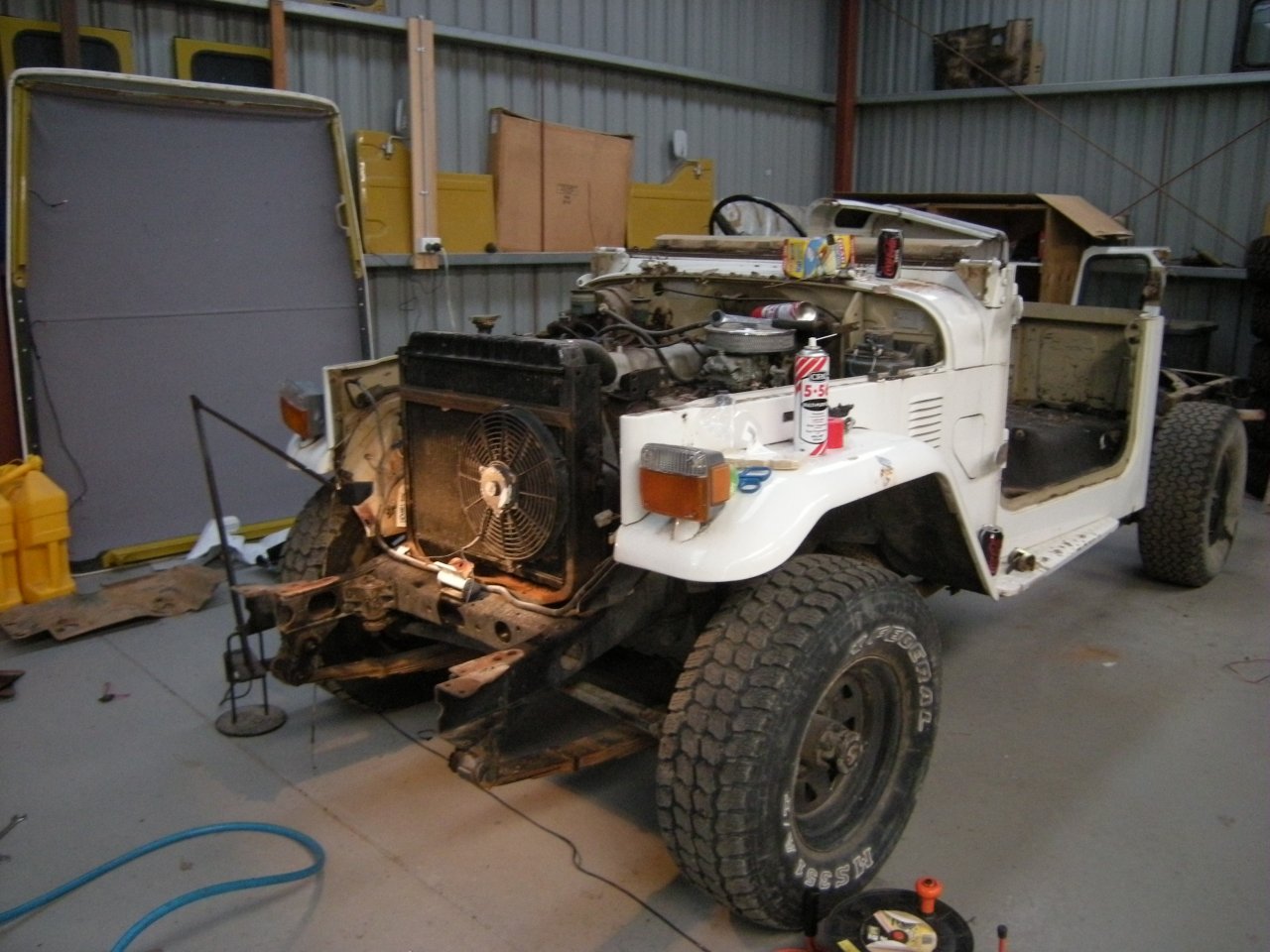 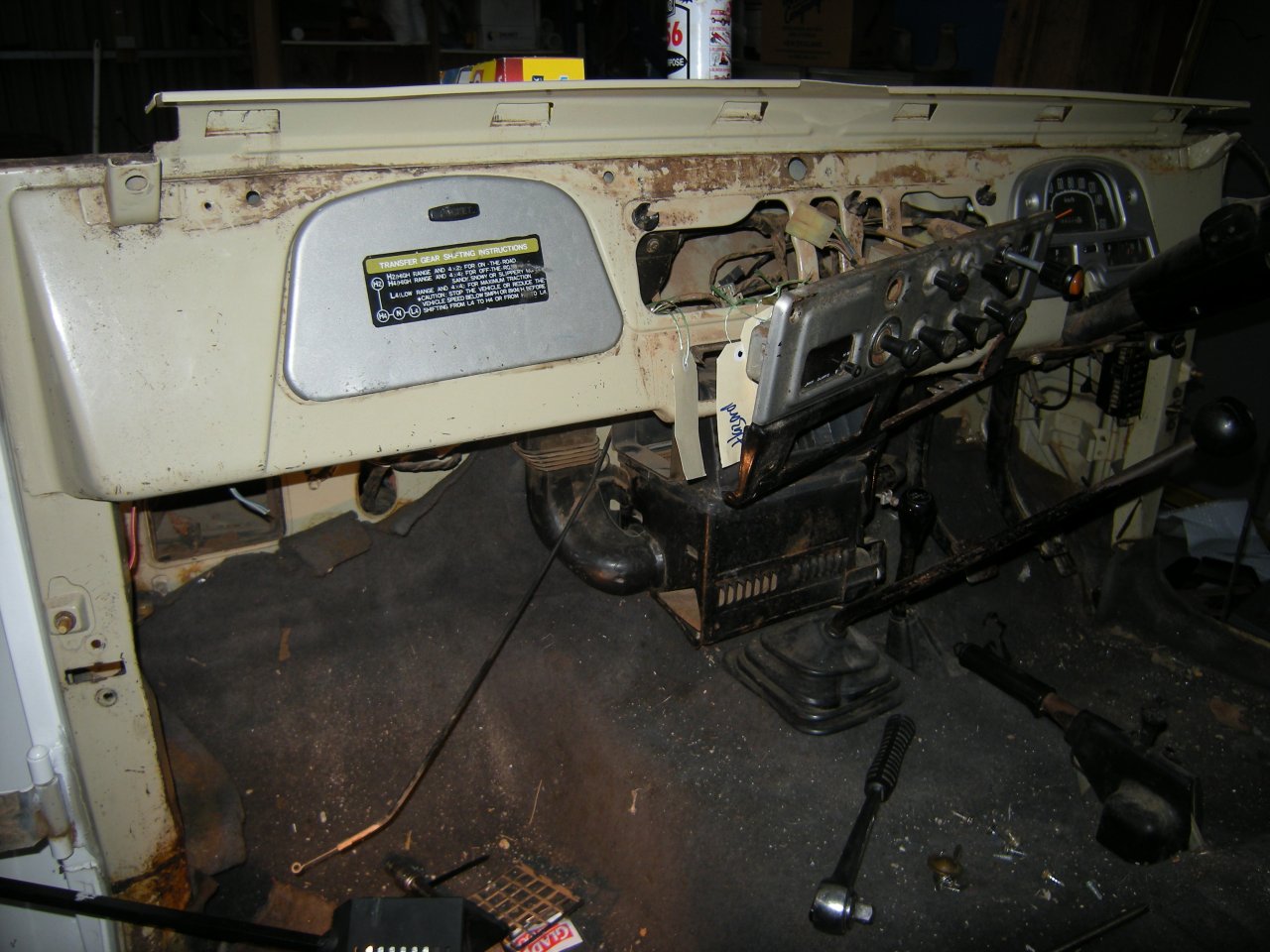 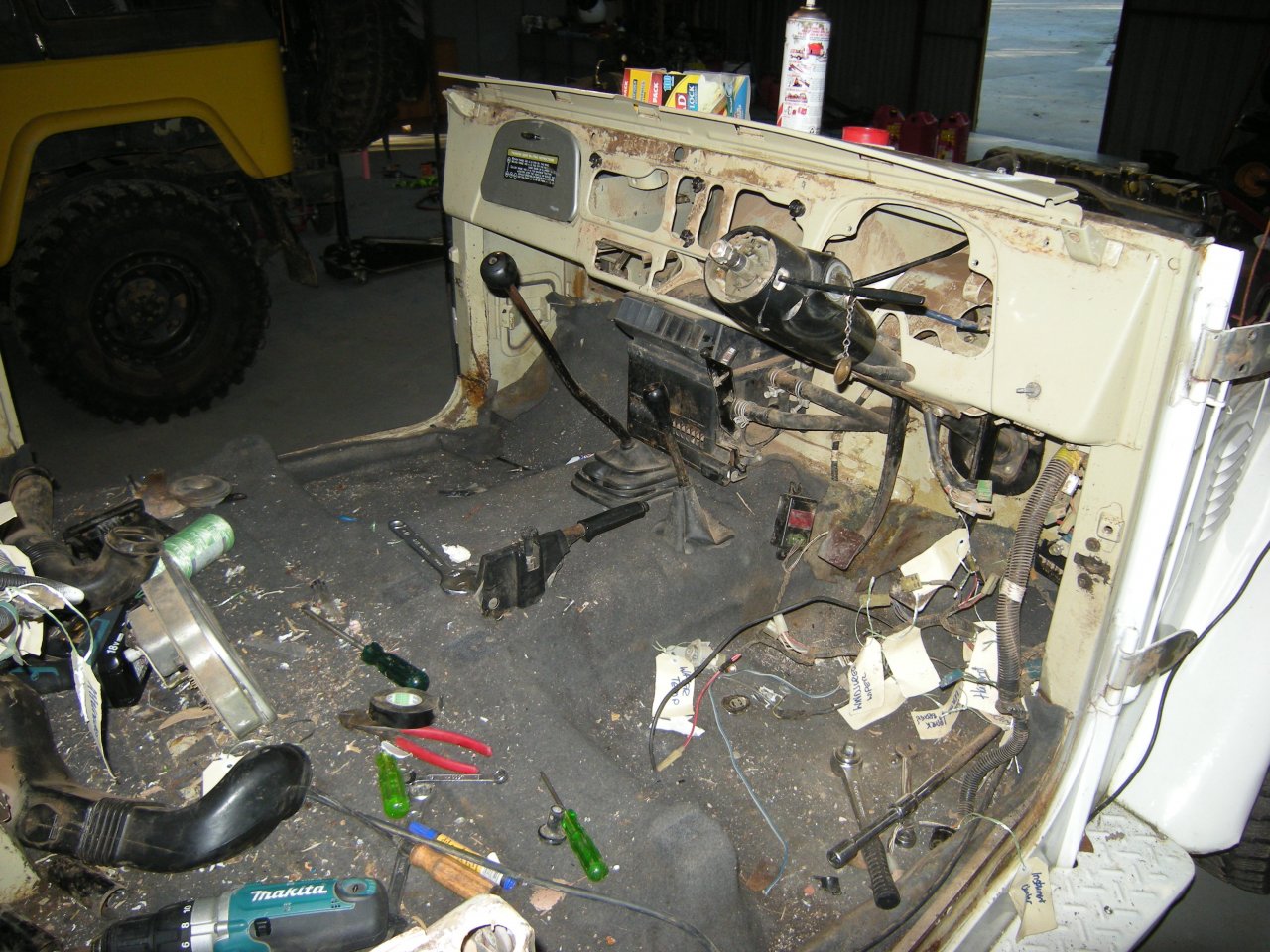 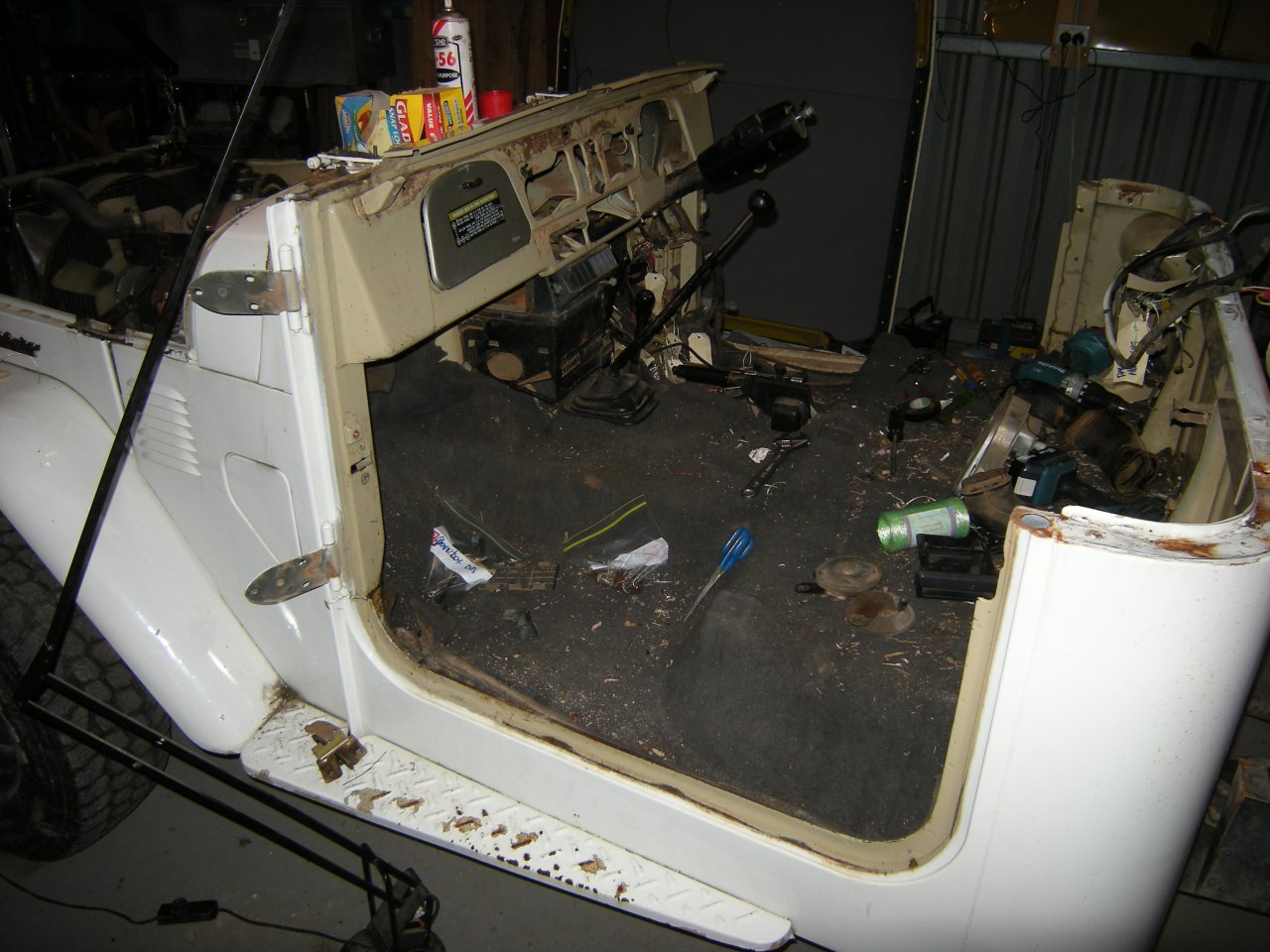 Your going have to widen the body if your going 80 series axles or are you cutting them down in size? I ended up putting the 80 series hats & coils on 40 series axles.
Last edited: May 12, 2014

G'day, what a great concept, I will follow this with interest. As you can see from the sig line, I come from your neck of the bush.. I've watched a few of your u tube runs and Im very familliar with tracks, Ellis, Warby and Narbethong tracks, Cockpit at toolangi (as it used to be) Rocky track etc...

Good luck with the build and post many photos...

watrob said:
Your going have to widen the body if your going 80 series axles or are you cutting them down in size? I ended up putting the 80 series hats & coils on 40 series axles.
Click to expand...


At the front I'm going to cut into the guards and add 1-2" of metal from another guard I have sitting here. Not going overboard as I will be putting slider there as well, like these ones on my yellow 40. Some do 4" and I feel that makes the front look out of proportion. I love the proportions so will try to massage them a little to meet road legalities. 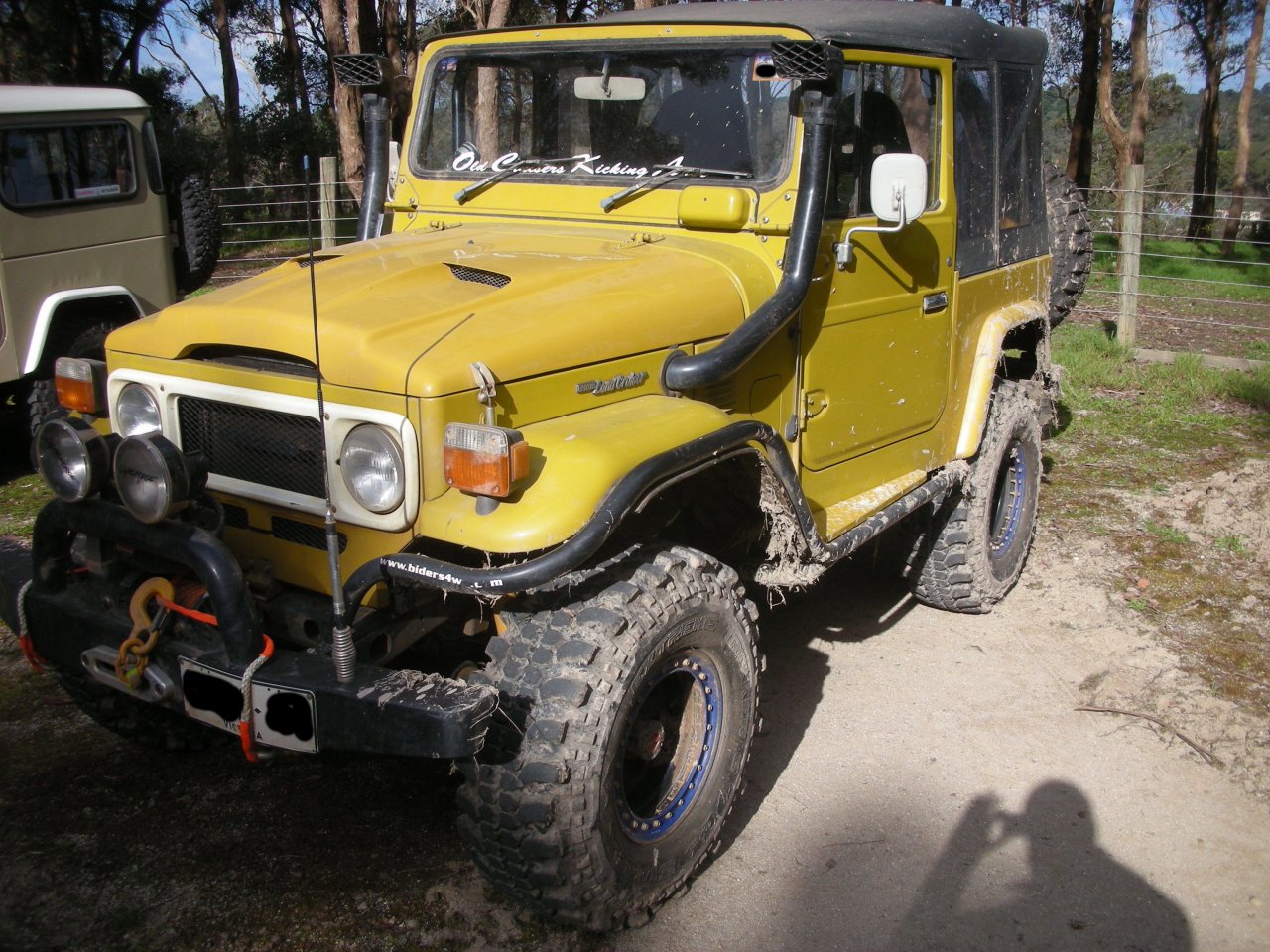 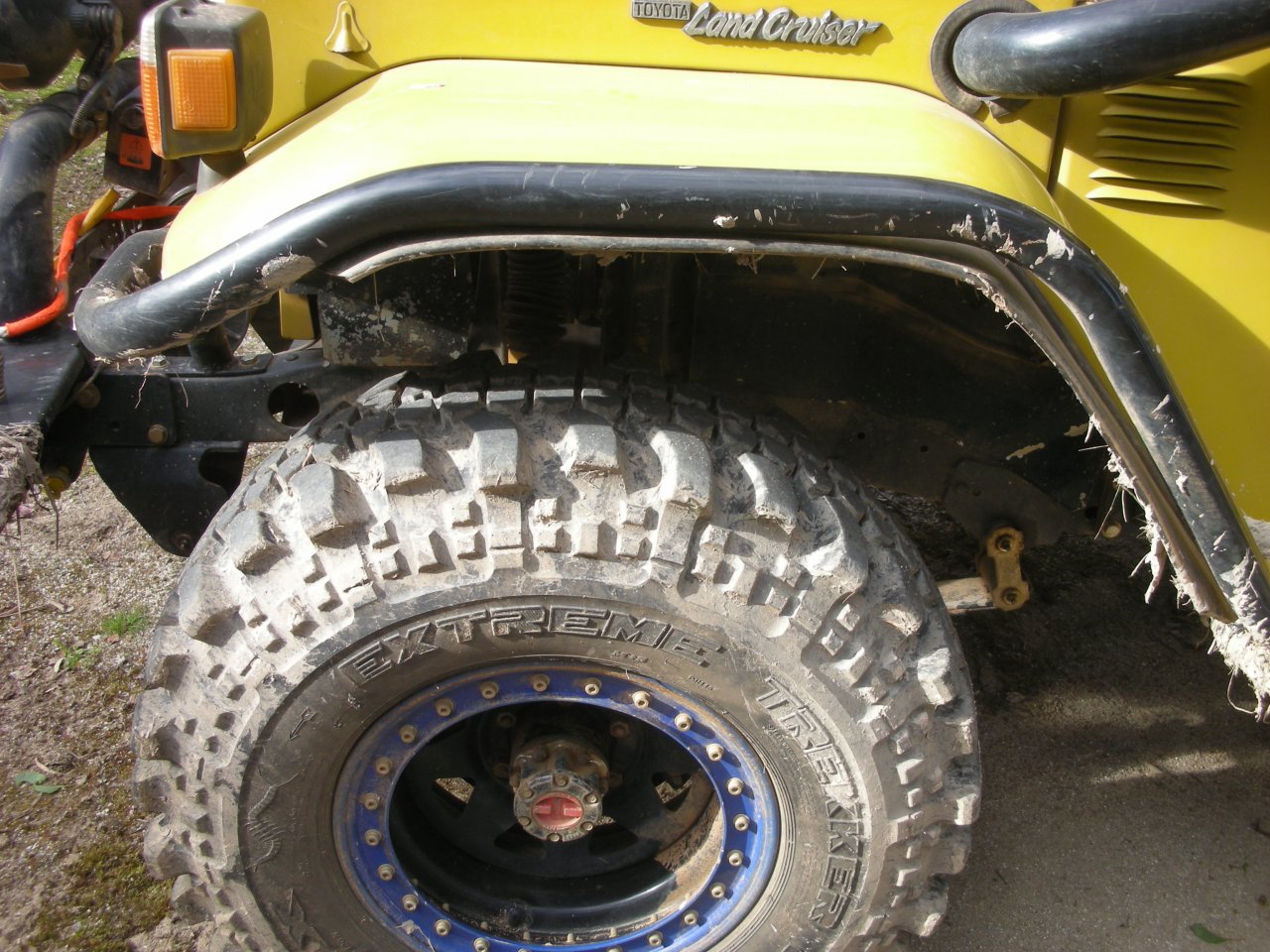 For the rear I will probably do some slider type flares to cover the wheels and also give the rear end some protection.

Wow do the authorities really enforce tires sticking out down their? In the US its against the law too but in only very rare cases is it brought up as far as I know.

The yellow 40 looks mean any info on its built profile would be appreciated.

I got pulled up a couple weeks ago in my 40 on the beach, was told the next time they see me I better have rear mudflaps?

ozcrusier said:
The yellow 40 looks mean any info on its built profile would be appreciated.
Click to expand...

The yellow 40 has the following done to it.
LS1 V8 200kW at the wheels, tow cam double row timing chain
twin 3" snorkels
Front and rear air lockers with air compressor in cabin
chromoly front axle
rear disc brakes
5 speed box with crawler gears
extended wheelbase by about 3"
sports seats
3" exhaust
35"x 11.5" x 16" Simex Extreme trekker 2
60 series power steering, did have 40 there but the bigger wheels hit the track rod
soft top and 1/2 doors and also hard top as well sitting in shed
shackle reversal up front and extended slip joint
sliders going around front guards and past side steps
rear fibreglass flares that one day will be replaced with the extension of the brush bars
2" body lift
2-3" suspension lift
rear shock absorbers moved to infront of the axle on mount
warn hi mount winch with plasma rope incorporated in a Eureka front bar
eureka rear bar with swing away spare tyre and petrol can holder
eureka internal roll bar

I think thats about it from memory. A few other bits and pieces that I had done that are my own mods to make it more comfortable for myself. It's been a work in progress for about 6 years but now is pretty much completed hence the new project.

Very nice build thanks for sharing.
The 4 door troopy is a great idea for your size family and it will make a great touring and tow vehicle.

Well the work has come to a brief halt on the quad cab, school holidays and work got in the way. But I have found a 1HD-FT engine to power the project just need gearbox and transfer case now. Still need a troopy roof and a few other bits but I'll find them eventually. 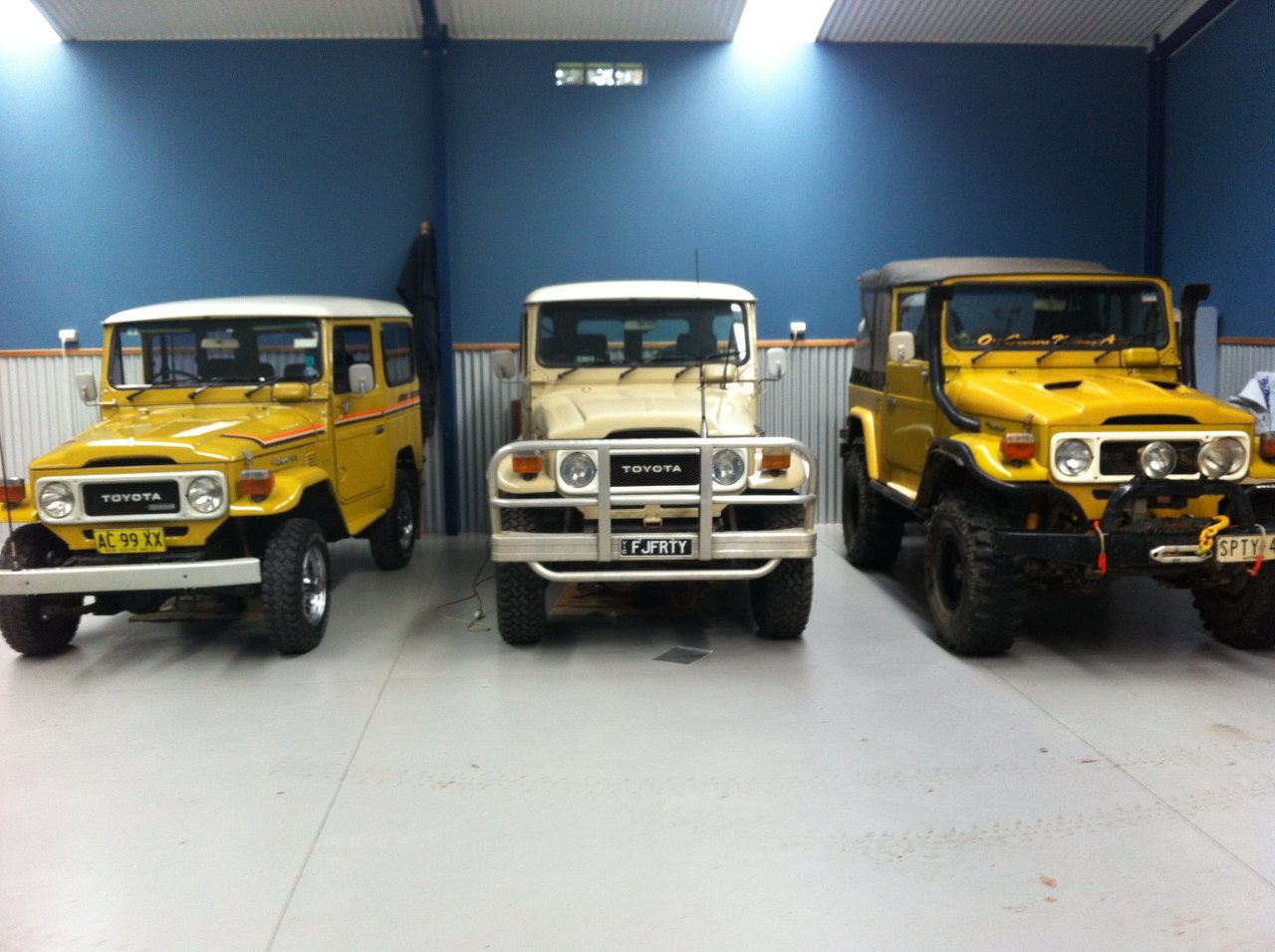 watrob said:
I got pulled up a couple weeks ago in my 40 on the beach, was told the next time they see me I better have rear mudflaps?
Click to expand...

Really? Even though you weren't even driving it on the road?

got a few more hours done on the project that has changed tack.

It is going to be an extended cab ute on the 45 chassis I have running Nissan Patrol 4.8L F and R diffs. It will be powered by a 1VD-FTV from a wreck that I have just purchased and had delivered. So here's a few updated photo's with the bits and pieces.

Got the other guard off and one of the bolts for the body. The others are fighting me at the moment. 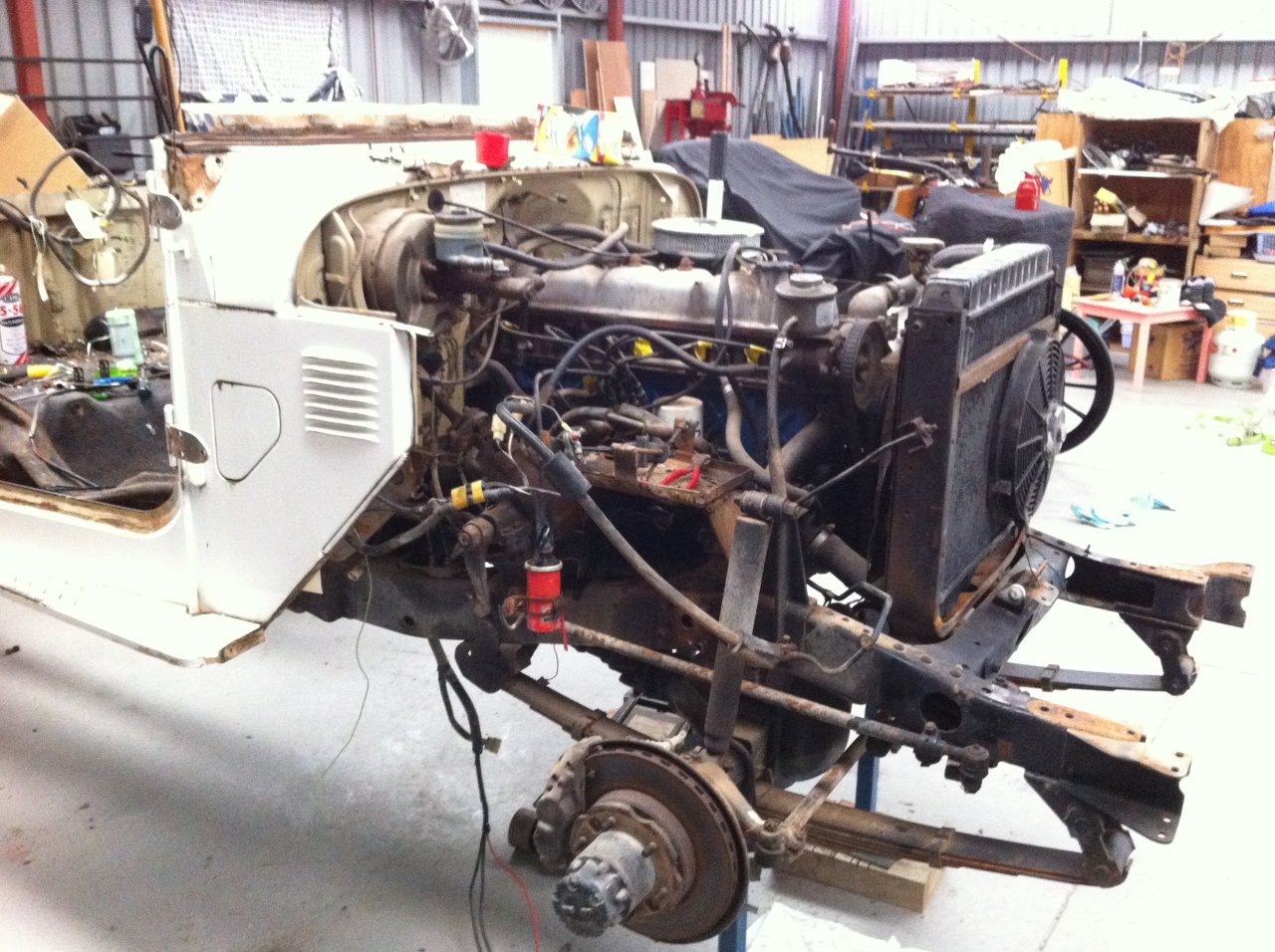 Picked up a donor vehicle, a 2009 79 series with the 4.5L turbo diesel engine. Will use all the bits (fuel tank, pumps, lines, rails, chassis engine mount brackets, maybe radiator as I know it works with the engine, gearbox and transfer case) I know what every one is saying about the engine higher maintenance cost and hard to work on. This is a weekend warrior and trip away rig and it won't see that high a mileage. 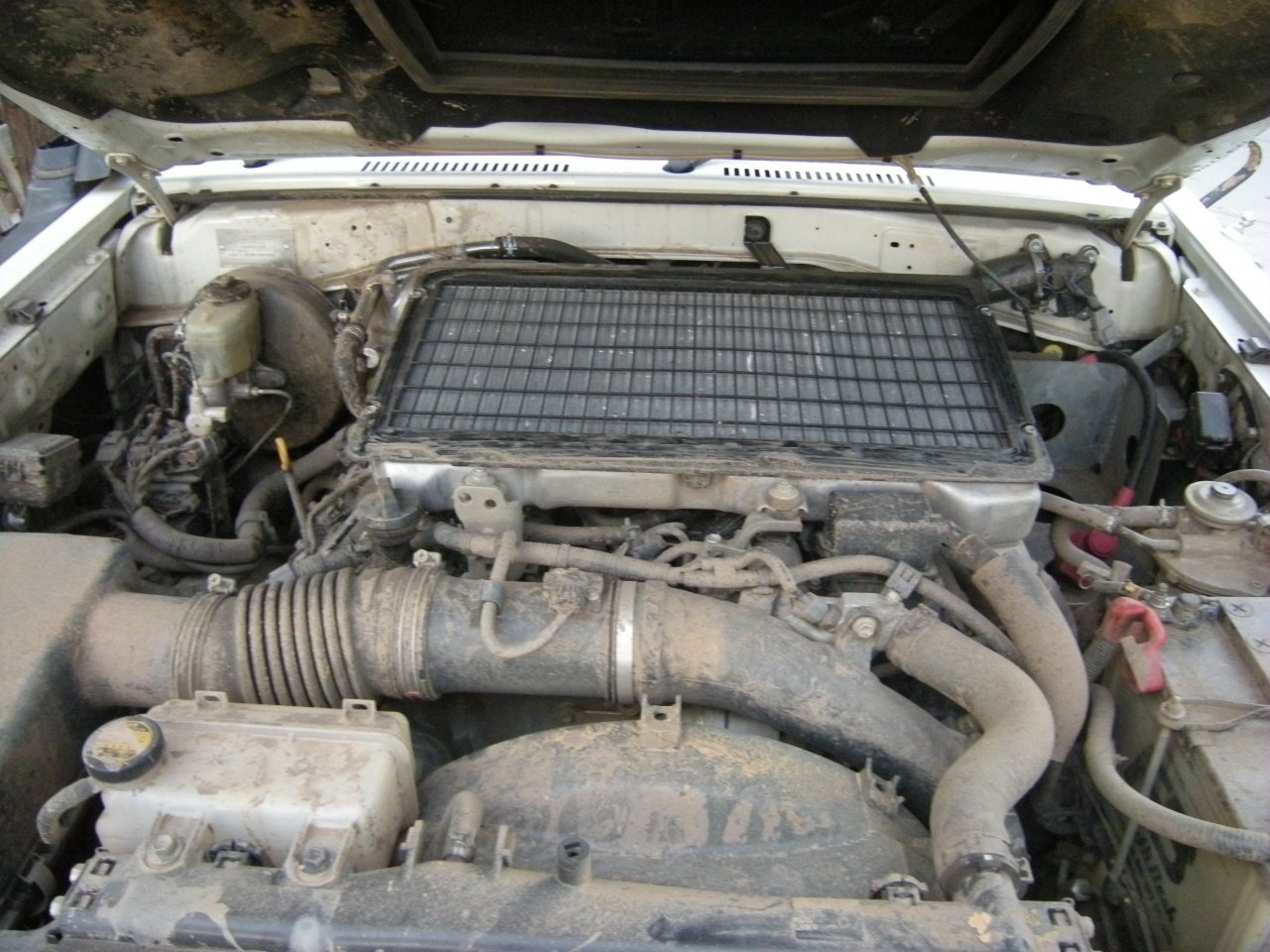 All other bits will either be sold off to get funds to pay for stuff going forwards or stored and used on something else. 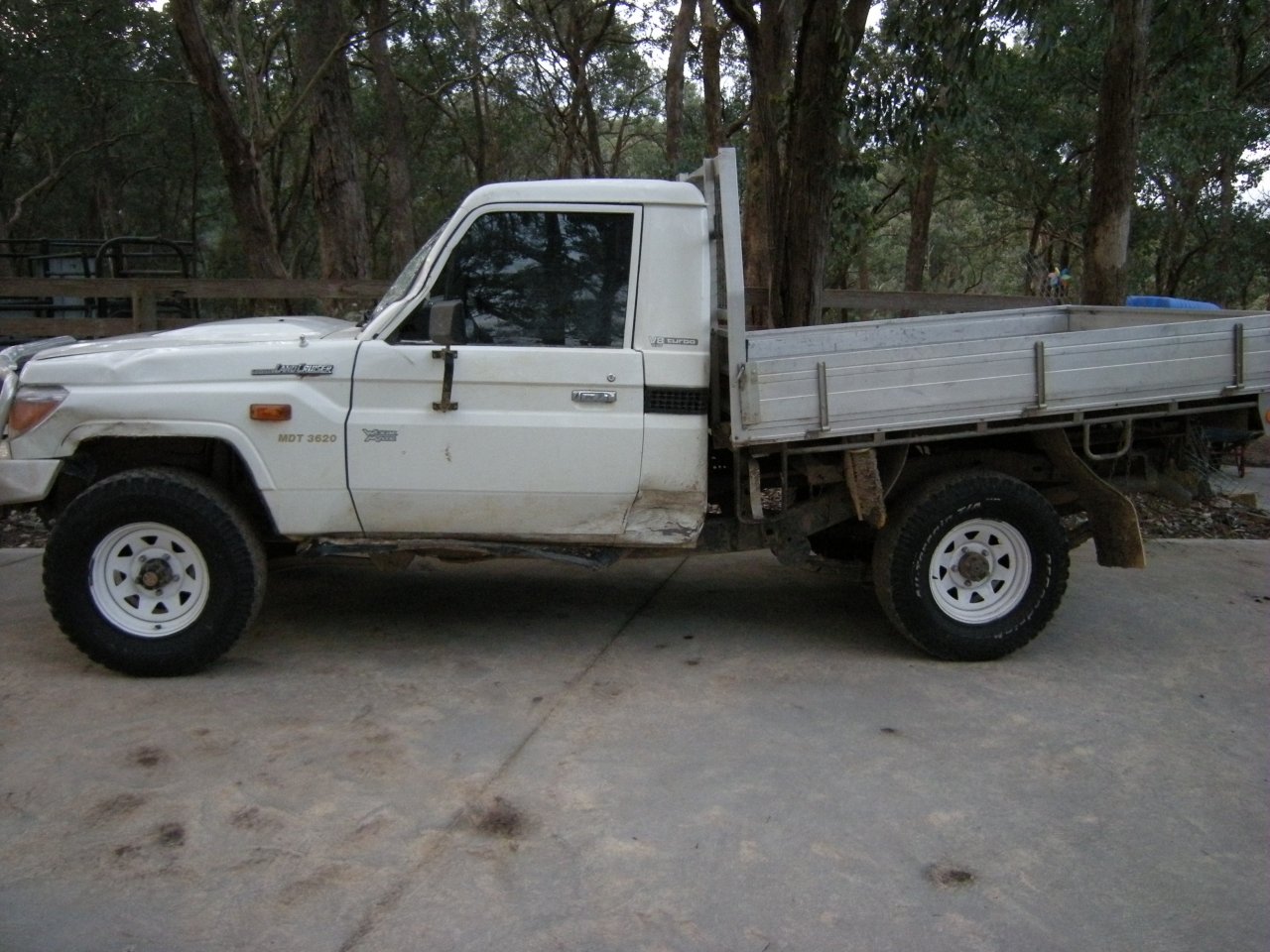 I'm not sure on what of the interior I will use, has a nice stereo with reverse camera in it, maybe steering column but will have to see. 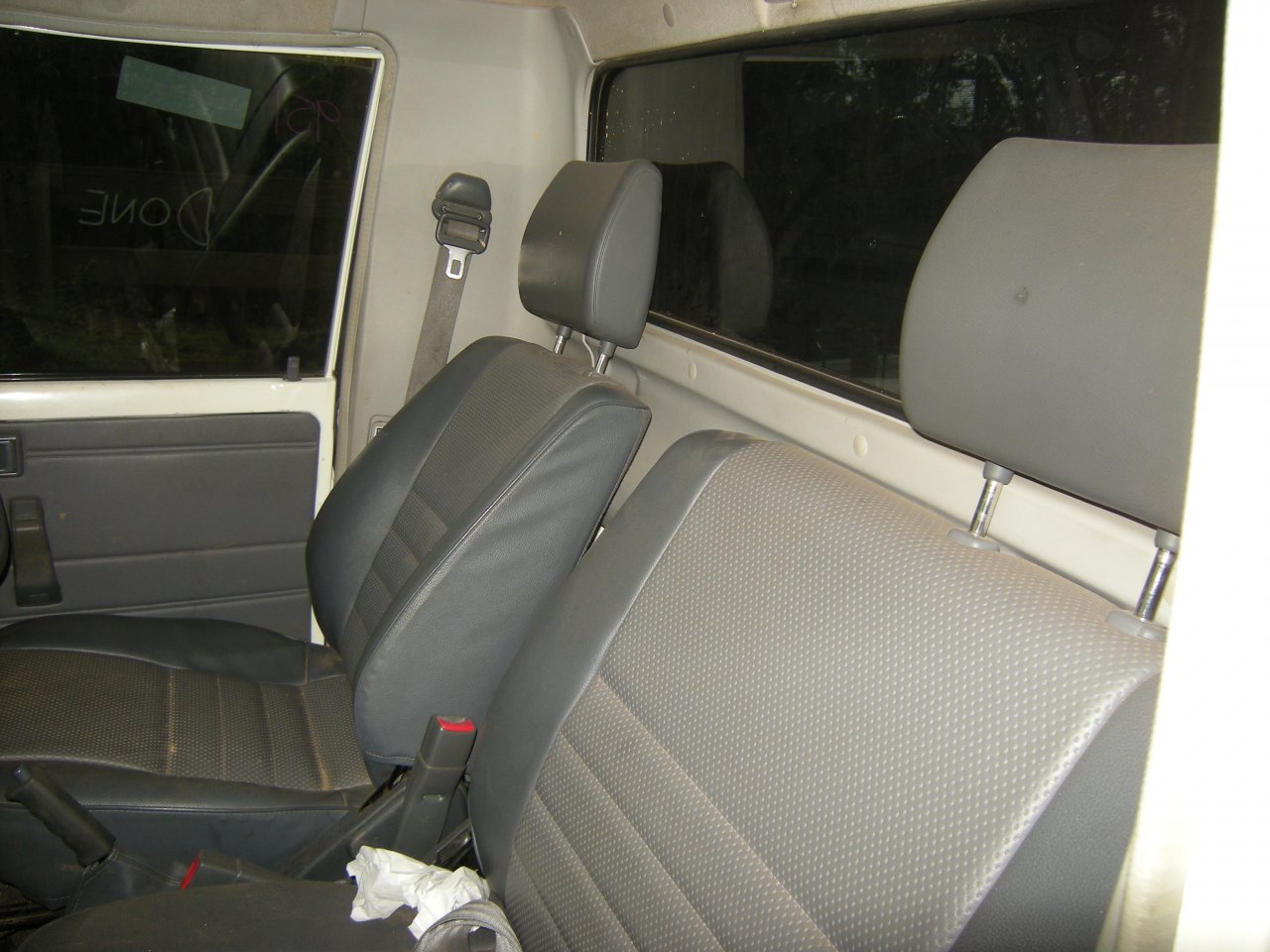 Here's the diffs I was wondering what I was going to do for a handbrake (emergency brake) but the 4.8L Patrol has it in the rear discs already so problem solved. Otherwise I would have had to muk around doing transfer case options and I didn't really want to go down that route. Diff centers will be 4.3:1 ratio, currently has 3.5:1. Will be installing lockers and running 35's. 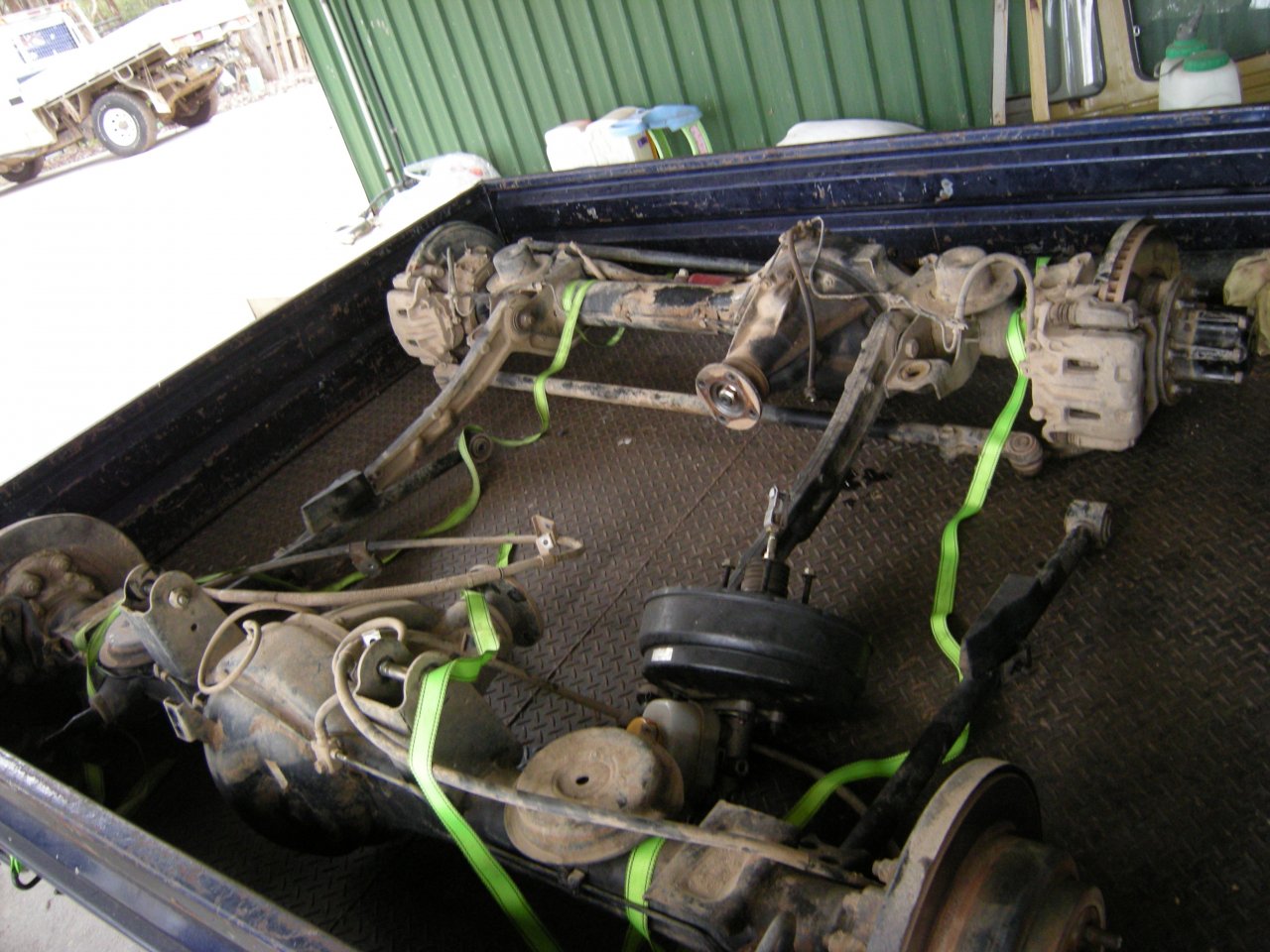 Anyway, hope to have the body off the 45 sometime soon so I can get that sandblasted so I can start to get the panels done. Looking at an extra 12-18 inches in there, will figre out from my yellow 40 and where I sit in it relative to the dash etc... but being 6ft 4in I need some room and the ute cabin doesn't cut it for me at the moment.

Sorry to here you have changed from full four doors to extended cab. Would have been much cooler, IMO, to be a full four door UTE. You are fortunate to have so many donor vehicles available in your country.
You must log in or register to reply here.

Where to get extended leaf spring center pin?
2

N
Project - why did i do this?

Tuesday at 10:19 AM
nerdalert
N
T
frontdriveshaft 700r4 conversion pics and what do I have?