I've wrenched very little in the past my cars, but I'm finding it therapeutic. I knew what I was getting into, no regrets! I just finished renovating our house, so needed another excuse to inhabit the garage. As a bonus, turns out wrench therapy is about the same cost as “couch therapy”, and I think the benefits are better.

Ultimately, I've been devouring the information on this forum (thank you all

) and also been keeping track on a google sheet of all the stuff I want/need/plans, however loosing track of what needs doing, plus might help another noob.

Basic stats.
Temp: 184-190 (OBDII scanner)all driving situations
Idle: 650, was 850 when I purchased, attribute to vac leaks
Timing: +5 or so.
MPG: don't know, don't want to know, but seems pretty normal from what everyone seems to get.
First owner 10 years 120K miles - had every service done at dealer, all major/minor services.
Second Owner: next 87K changed the oil did a lot, but spotty records.

At this point, I haven't decided on the ultimate build plan for my 80 as I am not sure of what I want to do with her yet, so for the time being...lifts, 35's, dual batteries, bumpers, etc is all a future state, but I need a plan before I head down any one direction. Supreme desire is to have baseline wrapped before the summer camping season.

Lube
Grease Knuckles – Squeezed a 4 0z moly CV tube in each December. (see note below re: axles)
Grease Zerks – Drive shaft yolk / U joints...To do ASAP, got the grease and the gun…

Electrical:
To Do:
Another place to inspect engine wire harness

12. Vacuum hoses - installed everything I could reach without removing anything.

15. All other lights (turn, reverse (sadly not the pfrans yet), markers, brake, doors & domes) all LEDs - have fast blink LED turn signals, but ordering the Novita ep35.

16. Tools - had to buy the hook, and extensions for the jack. MIA from the rig.

20. Deleted 3rd row seats...might make them a couch for the garage.

22. Deleted washer diverter, it diverting more washer fluid to my underbody than the glass. Decided to embrace the leak out back. Installed a “universal” T union. Pump line to front squiters have 3/16” id connections, but to the rear it has 1/8” id opening. Leaks just enough to the clean the rear glass when you clean the front. Whatever. Amazon.com: Dorman Help! 47349 Vacu-Tite: Automotive Maybe will find a diverter someday, maybe not.

24. checked for play in steering and driveline (before I bought).

25. just added a “fastcap” instead of the screw of gas cap…cuz why not?

Front:
No obvious sign of oil leaking in the knuckles, but no record of a rebuild in last 10-12 years, but given the rears had new bearings and seals when I opened them up last week, it's possible (planning for a terrain tamer kit, on the list for this spring)
will also replace wheel/axle studs as needed

OIL LEAKS: yep, couple dribbles after every drive.
1. Dizzy seal: replaced, was definitely leaking.
2. Pump Cover: suspected of leaking...certainly looks like it. (can't get to it, see below) Replace exposed #3JIS with Torx head.
3. Main Crank seal: TBD, will replace.
4. Crank Pos sensor...maybe, there are drip off the sheild, but prob blow back. I need to look at it closer.
5. BIG ISSUE: Cranky Crank bolt that is NOT coming off via any conventional means. Talked to Gary at Mudrak, going to have him deal with it (and the seals above)… Bannana needs help. 30mm crank bolt siezed?

Grill:
Replaced 40th Black pearl sombrero grill with a '94 trader – plan to repaint or plasti-dip it and black out chrome around headlights at the same time. Noob Question. Did I do this right?

Tires:
New Toyo Open Country HT 285s - compromise until I have a build plan put together.

2. Weird harmonic whistle noise at 2500 and above rpm. Doesn't affect power or anything else. Happens only when truck is moving, not parked. Exhaust? PS? Trans???

8. rear door locks - don't operate via fob, will order new motor, clean etc...def most annoying thing with the kids. But funny when my wife sets of the the 115db SOS airhorn alarm when she opens the door to let the kids in before I unlock it

9. windows - go up sloooooooowly. 'specialy when wet. read the threads. will address at some point soon, will try cleaning channels/lube tracks.

10. Weird cricket like noise from right side when going over bumps or rough spots. Suspects TBD – bushings?

11. Antenna busted off - switch doesn't seem to operate, ie no noise. However, when turning on or off ignition, motor operates. Noticeable FM improvement 2-3 seconds later, so something is happening. Plan to get a mast kit and see what’s what. if not, might delete altogether. Fill the hole and repaint. El See 1996 FZJ80 build

14. Seat leather, err...I mean seat cardboard. Gonna try the leatherique system...when it get warmer, or warm it up with an electric blanket.

15. Fan Clutch. Hmm. Not worrying about it for now due to operating temp at 185. But ran the basic tests, and it is shot. I did PB blast the spring when I had it out to do the belts, and that loosened it up so that operates again, but can still stop with a newspaper, and spins long after engine off. Will replace along with water pump in due time.

16. Battery: newish from PO, a non megatron interstate. Does the job, but will upgrade at somepoint.

17. Mismatched spare tire...need to address that at some point.

18. Power Steering lines: I think I have a leak, not sure need to confirm, but level always seems normal. Will replace the LP and HP, and maybe bearing

19. wind shield glass. Original Toyota glass. Just got it’s forth dime sized spider crack on the hwy last week. Millions of mirco chips…hmmm don’t really want to replace it, but getting there.

20. I have a blackstone test kit in hand, but haven’t asked her to “pee in the cup” yet.


Longer term, no known issues, but on the list:

Pesky Heater Hose (PHH) - inspected, no bulges, looks clean, but to do next time the in laws come to town for the week Other Kits & Merchandise

Planned ATM withdrawals:AKA the fun stuff
1. Purchased Slee upgraded headlight loom + two aux light kits. Adding OLD Piaa 6” 100watt Drivers that I’ve had for 15-20 years. Will use them till I break them, and some form of fogs (Rigid Dually SAE/Dot lights ideally, or something less spendy)

3. Gobi ladder…maybe. I spent a lot of time going up and down on my last roof rack. GOBI LANDCRUISER 80 Rear Ladder (Driver's side)

7. SEATS. Holy crap. I drove a GD280 with Recaro Specialist M seats (which work in our rigs) and OMG, all I can think about are those seats, mmmmmm sweet dreamy German seats. $1500/ea + $300 in mounts…gonna be awhile (unless ebay comes through). That said, might try these too. Worried the bolster might be too high. Braum® - Elite Series Carbon Fiber Sport Seats

Alt plan is to take mine to the local auto taxidermist and have them re-stuffed. Cost: $1400 for some nice thick hides.

8. Lift? Suspension? I know I’ve got stock springs and shocks in the front, there’s aftermarket shocks in the back, they're red...KYB Monomax I think… Ideally, will be updating suspension, but don’t know where to start. So that’s back burner for now.

9. Bumper? Tires? Winch? Maybe. But need a plan, and decide what I want to get out of the rig and the relationship. Side note, my wife has commented that the 80 without an ARB bumper looks like a “soccer mom car.” I love my wife!!

10. Sliders – this is something my wife wants for her and kids (mainly as a step), so that should be an easy sell. NOT going to add nerf bars or running boards. Nope. No way. Sliders or bust.

12. a CB has saved my butt several times in previous lives, so will add eventually, maybe in the ashtray slot?

13. RTT. Storage drawers. Not interested. Need the rear cargo area and rack clean as possible. I use it like a Pick-up truck. Carrying all manner of crap for the kids, and house and work. Always putting small boats/paddle boards/windsurf gear/Skis on the roof etc. Prinsu might be overwrought for my needs, but I've bent or broken every thule/Yak load bar on every car I've ever owned.

17. I might do the RF key FOB range extender...but that's seriously low down.

I had a vision of sectioning it like the FSM, but that would have required too much brain power. Crap. Maybe I have to add that to the To Do list.

Opportunistically purchased it. Figure I'll install it and use it till I need a winch. Then I take it off and sell it 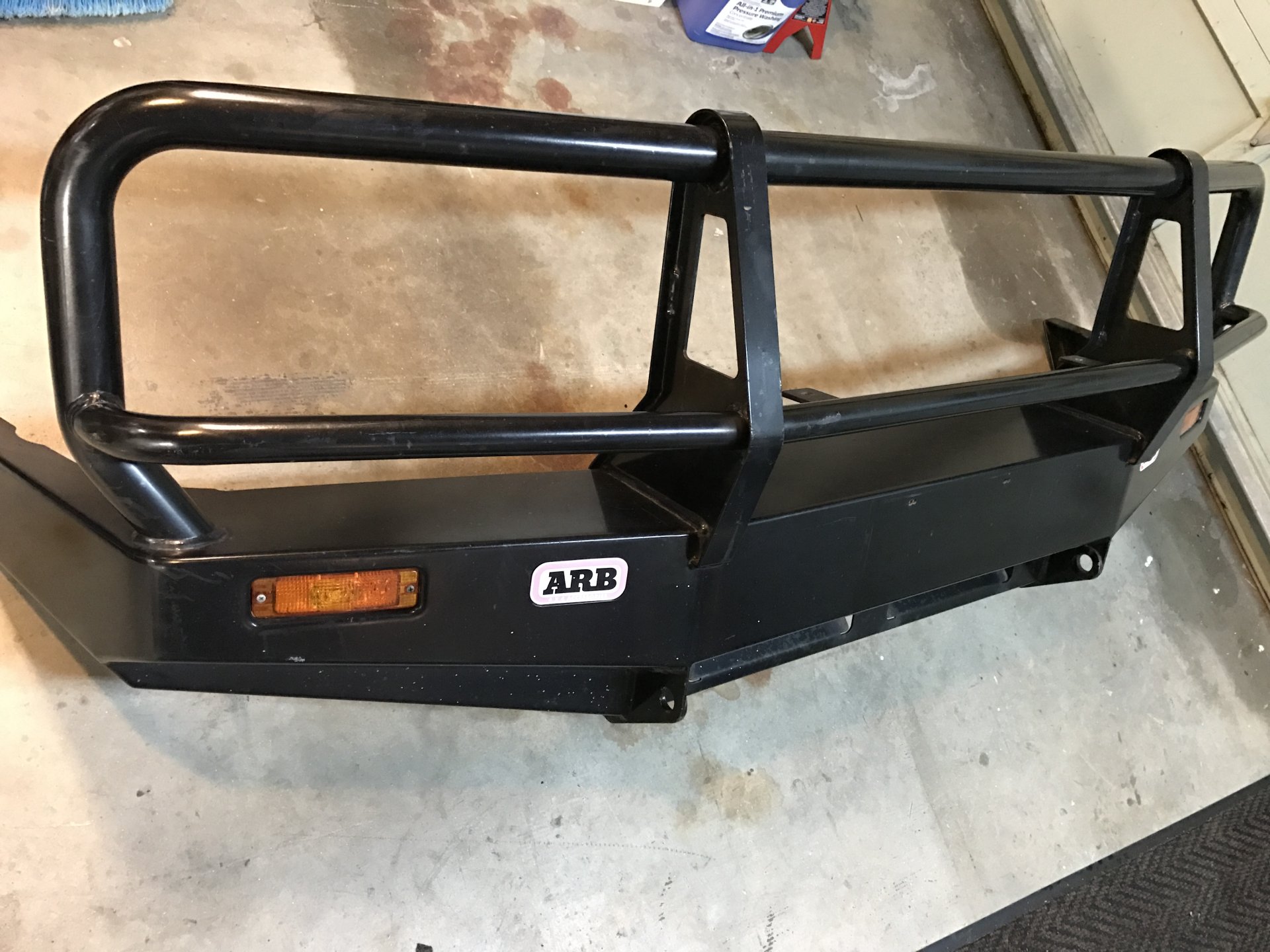 Ha! yes. Haven't had time to update here, but overall been drama free and happy as can be.

Got all the the oil leaks fixed (knock on wood) that I couldn't fix due to the cranky crank bolt.
Main crank seal - Check
Oil pump cover - check, check (they replaced the cover and the gasket
Oil filler cap - had a sad gasket.
I had the Valley Hybrids team tackle these - They were awesome.

-ARB installed.
-Prinsu installed.
-Slee Headlight / Acc Harness. installed
-PHH - check, new
-installed trailer wiring harness into factory connector. Didn't work at first. May have been the 20 years of road smutz packed into the connector. Cleaned and cleaned it some some more...now have trailer lights for the boat trailer.

-Prinsu Rack...in love with it. I'm sure I'd love a Gamiviti or Gobi too, but I love my Prinsu for sure! Whisper quite, lots of compliments, easy to load and lash too.
I'm thinking about adding L track to the side, or T-Track (used on sailboats for running rigging gear, same concept as L track) I have some T avail to me and would need to modify the accessories a bit...might be fun.

-Toyo open county HTs. I love these tires too. Thought the were a compromise, but they are surprisingly decent on dirt roads, def a good choice for where I am at, they are super quite and sure footed on the highway/around town. Felt confident in the snow and no issues in the wet. 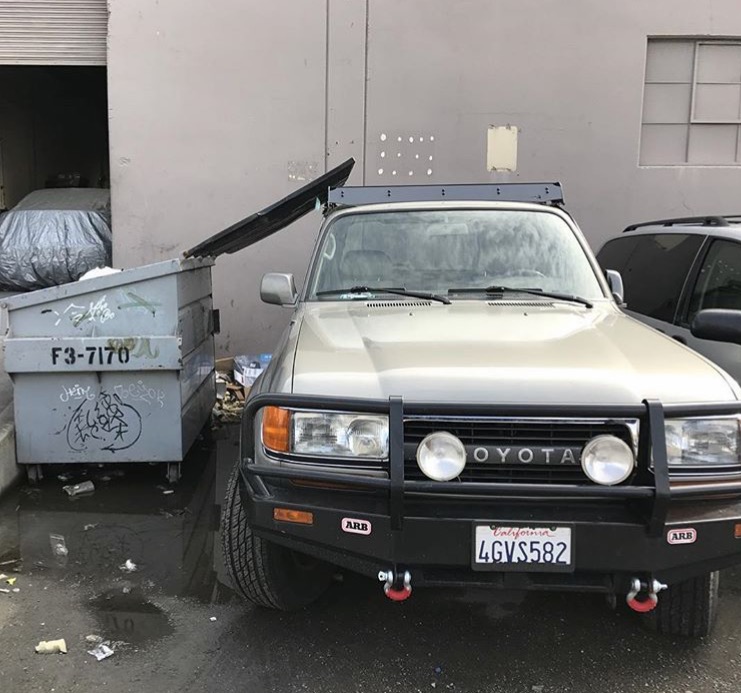 @HardyDanger thanks for posting such a comprehensive list, I’ll undoubtably use some or all as a baseline for my sage 40th I just bought in San Diego and brought back home to Nevada. I look forward to seeing more posts from your build and mods. 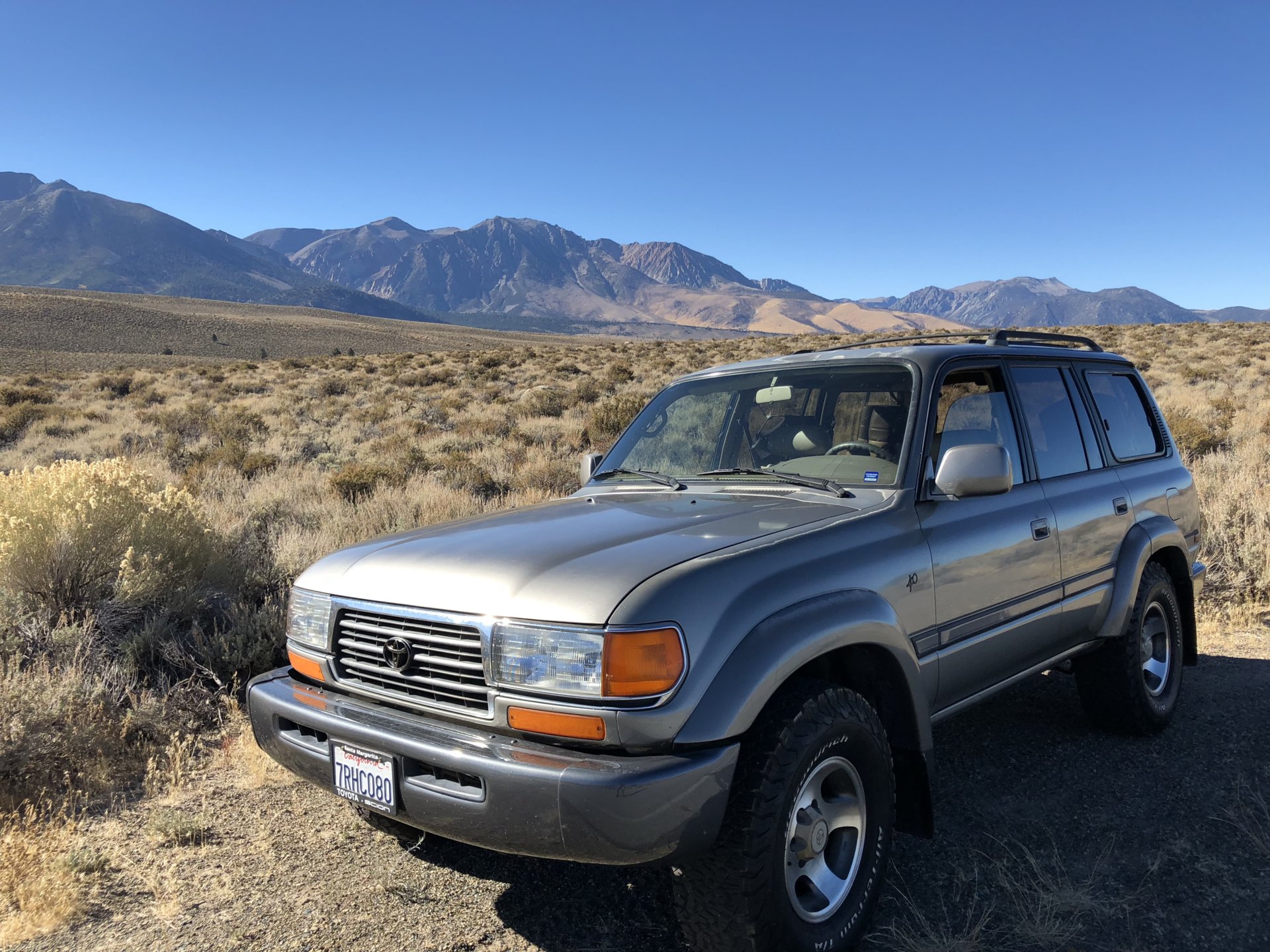 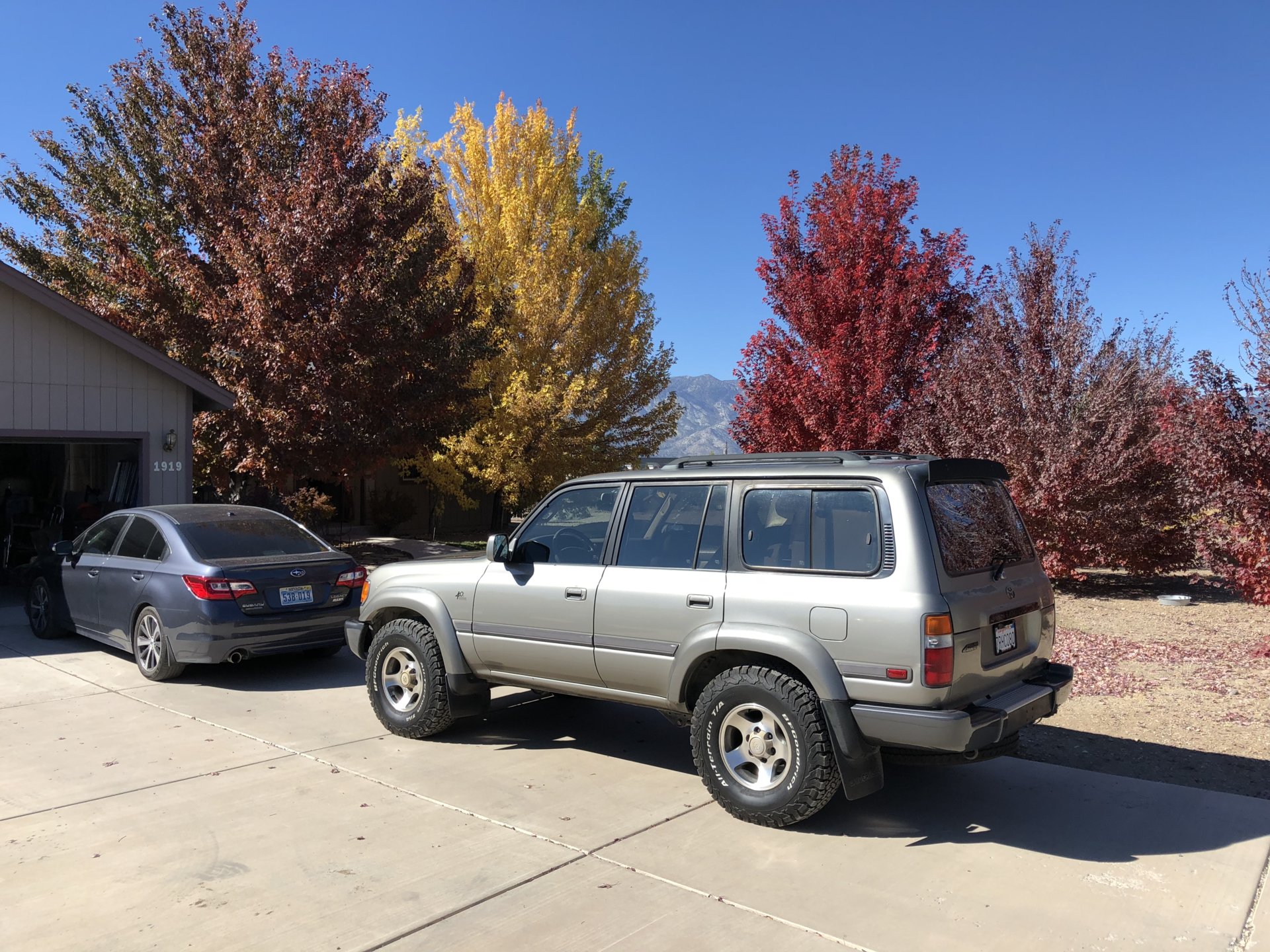 Dang. I gotta update this thread. Been a while. Knuckle Therapy is in full force right now....

Crap. I was planning on a shorter list since I just acquired my first LC, but everything here sounds like “oh, well, yeah - have to THAT.”

BlutoF15 said:
Crap. I was planning on a shorter list since I just acquired my first LC, but everything here sounds like “oh, well, yeah - have to THAT.”

First lesson on Mud...add you year, mileage to you signature line. There's enough variation from 90-97 that you get better answers!

The people here are amazingly helpful and there's deep knowledge on these rigs. You're never alone!!

My list has changed over time. I'm finally getting around to the fun stuff like tires and lifts....

All are noted - thanks! I have a work trip next week with a lot of dead time, so I can make notes from the search function. This place has an impressive and diverse knowledge base for sure. Happy to be here!

T
New 80 and some questions.