Heading to Moab for a few days in July and am looking for camping and trail suggestions. I'll be in a lifted 200, 33" KO2's on 17" Rock warriors, BudBuilt sliders, but no other armor. Factory skids and no bumpers or winch. This will be my 1st time off-road in Moab. I have some experience, but not MOAB level experience. Sedona is about as close as I've got and done some red rock trails there (Broken Arrow ect). I am eager to get out and have some fun while we are there. I'll have little kids along and be towing a MOAB Fort XL tent/trailer so i want fun, but not rock crawling, severe damage, my wife is gonna kill me type of fun.

1) Looking for campsite suggestions.
I've gotten plenty of vague advice but looking for specific options. If anybody has GPS coordinates of their favorite sites PM me if you don't want to post publicly. I'll promise to keep the secret. I imagine its gonna be hot as Hell in July so if there are any places slightly cooler without those sand flees i hear about that'd be awesome. Looking for dispersed and/or BLM stuff, not into big crowds. Is Moab crowded in July? I have the toilet and toilet tent and stuff needed for BLM camping. Planning on camping in Valley Of the Gods 1 night, then driving up to Moab the next morning and staying 2-3 nights

2) Looking for must do trail suggestions.
Again, not looking for what is the most extreme, but what trails are must do's and would be still fun with a family along. if any of these trails also have good campsite options that is plus too. Hoping I can find a good spot the 1st day, set up camp, and leave the trailer, so i won't have to drag it along on all the trails.

FYI I also posted this on the 200 forum

Driving from the 2nd row

Drive through VOG, and linger, but camp just up the Dugway at Muley point. Epic views, and much cooler.

I love Moab, and I'd do Moab in July with AC. But there is no way in hell I'd wheel and camp there in July. Get a hotel at night, it is likely going to be in the 100's during the day maybe cooling off to 70 at night. The shower accessibility and a pool are well worth it. There is some cooler camping in the LaSal's, but not exactly convenient to Moab itself.

Must do trails if traveling solo? I'd say Fins-n-things. I like Rainbow Terrace, Pritchett Arch (not the Pritchett Canyon trail) and Klondike Bluffs-Tower Arch as well. There are many others, but I've done all of these solo without fear.

I would consider VOG and camp higher elevation as recommended and then hit a trail or two in Moab then head to La Sals and continue east toward Placerville and then south into more remote higher elevations. Lots of options out that way.

I recommend Hell's Revenge. Don't let the name scare you, there are bypass lines around the nasty stuff, and the slick rock is a must have experience. You will never have more traction than on slick rock with a cruiser. If you want a beautiful drive, do the LaSal Mountain Pass. You will likely see mule deer and great views.

...and I second the get a hotel recommendation. AirBNB also has a ton of great places there, and July is not peak season, so there should be plenty. That kind of heat keeps a lot of folks away, and a pool is such a luxury after a day of wheelin' and sight seeing.

if there was any flexibility in your schedule, the 200 series group will be in Moab the 21-24th.

hells revenge is amazing, non-damaging. there is one spot right at the end that is tricky.
do a search for GPS, tablet, mapping options. having a gps track to follow and make sure you are "on trail" is invaluable.
be prepared to stay overnight. bring lots of water!

top of the world is a bumpy pain in the butt trail, but the views/photo opportunities are great.

In July the best camp in Moab would be Quality Inn

Hell's Revenge sure is THE iconic Moab trail

Shafer Switchbacks in the Canyonlands National Park is definitely worth it
Last edited: Jun 15, 2018

I would just go to Ouray Colorado instead.

Jason hansen said:
I would just go to Ouray Colorado instead.
Click to expand...

I would just be advised and aware of the situation up there right now with the San Juan forest closed and some big fires burning. Plan accordingly.

Well, still debating hotel vs camping in Moab. We'll have our dog along so that limits our hotel options too.

As far as day #1 goes, driving up from Phoenix, if we camp I'm into the idea of camping up the Dugway at Muley like @Pitch suggested. I believe its over 6000ft so should be a tad bit cooler just for the one night.

Morning #2 driving up to Moab (assuming i just take the 191 but open to route suggestions). At this point either need hotel, or to get to a campsite and set up basecamp. I want to get the trailer off and setup somewhere so i can be free of that for a couple days to explore some of the great trail suggestions I've got from this thread. I also received some great campsite advice on specific spots from @OregonLC that are off the Chicken Corners trail. Looks like id basically just go from Moab, over Hurrah Pass, down about the 1st half of the chicken corners trail. Does anyone think I'll have any difficulty with the trailer getting that far? Its about 15 miles (google says 1hr) from Moab. Gonna be hot, i get it, could be a horrible idea, i know, still debating it. Hopefully just planning on being there early am and overnight and have a spot with some shade.

An alternate option i also got from @OregonLC was to:

"explore the Dixie National Forrest. It's high forest (7,000-10,000) so I would imagine it would be relatively cool, even in July. Google Cedar Breaks National Monument if you want to see a good place to hub your stay"

Has anybody else been in this area and think this would be worth just abandoning the Moab plan due to heat? The only locked in plans ( with actual campsite reservations) are Grand Teton and Yellowstone. So basically any way up from home in Phoenix, thru Colorado or Utah, and any alternate way back I'm open to suggestions. There very well might be areas or routes that might be better in July. I was looking forward to Moab, but could just as easily be excited about something else. The return trip down from Yellowstone i don't really have mapped out more than a loose route through western Utah into Grand Canyon but still will need to find camping on the way back home too.

As always, if you PM me actual GPS coordinates of campsites i greatly appreciate it, and I promise I won't share the coordinates, as to keep your Epic spots epic.

Here is a loose map of what I'm looking at, as of today. I definitely received enough feedback saying camping in Moab in July is probably not the best idea.... I'm starting to listen .

I'm thinking of reversing the route i originally planned. Instead of 2-3 days in Moab area, I'll drive from Phoenix, to SW Utah instead and spend 2-3 days there exploring. So, using Dixie National Forrest, Cedar Breaks National Monument as basecamp to enjoy the cooler temp's at that higher elevation. Does anybody have suggestions for remote or dispersed camping in this area?
Also my newly purchased Moab Backroads book doesnt have this part of Utah in it so any trail advice on what dirt to explore in this region would be greatly appreciated.

After 2-3 days there, taking scenic Hwy 12 from Bryce to Torrey, Utah, Capitol Reef National Park. Then onto Gran Teton via Idaho. The part here i dont have figured out is where to stay 1 night between Bryce and Grand Teton to break up that long drive. Also, any ideas or routes that'd be better than driving through Salt Lake City? Anything interesting or anywhere good to see/stay in NW Utah?

Teton and Yellowstone for 1+ weeks at their formal campgrounds, just going around being tourists.

On the return trip avoiding salt lake City by coming down from Yellowstone through Flaming Gorge and Dinosaur National Monument. Dip into Colorado through Frutia, then over to Moab. Probably just do 1 night in a hotel in Moab then and hit up 1-2 trails. I'm pretty set on doing Hells Revenge as my 1st choice.

After Moab, driving through Valley of the Gods just to see it, then back to Phoenix.

Let me know what you guys think and if you have any advice or routes or things I'm missing. Like i said, the Teton and Yellowstone is the only part i have reservations, the rest I'm just winging it and up for exploring. 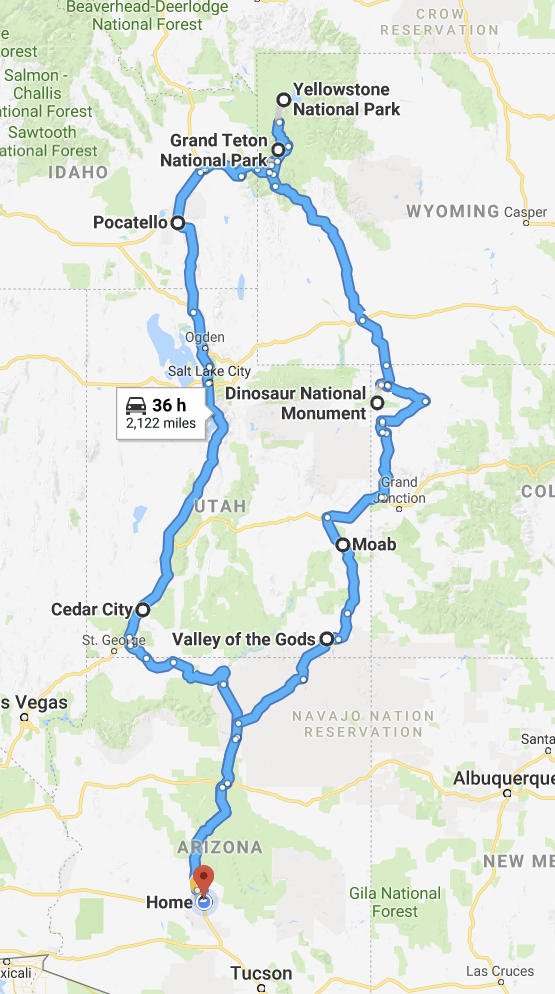 LandCruiserPhil said:
From Kanab go straight up hwy89 to SLT back on to hhy 89 through Logan Canyon over to Bear Lake and stay on hwy 89 to hwy 191 to Yellowstone
Click to expand...

89 is an exceptional drive and should not be missed for scenery!


LandCruiserPhil said:
From Kanab go straight up hwy89 to SLT back on to hhy 89 through Logan Canyon over to Bear Lake and stay on hwy 89 to hwy 191 to Yellowstone
Click to expand...

blatant said:
89 is an exceptional drive and should not be missed for scenery!
Click to expand...

Great, 89 is officially in for sure. More research I’ve been doing on SW Utah and really excited about it. Thinking of staying west on the return trip as well so I can see more of that region. Maybe Bryce, Zion, Grand Staircase stuff on way up. Dixie , and Capitol Reef northern stuff on way back. Think I’ll save Moab as a separate trip on it own at a later time. It’s close enough to Phoenix would be easier to go there just to wheel sometime later instead of trying to tag it on to this longer trip.
You must log in or register to reply here.
Share:
Facebook Twitter Reddit Pinterest Tumblr WhatsApp Email Link