A friend of mine in Brazil owns this Landcruiser, it was imported to Brazil in 1957, it was already a Statonwagon like on this picture. it comes direct from Japan.
Now the question:
Is there anybody who knows something about this unique Landcruiser? Where it comes from, who build it, are thers more of them.
more pictures on Landcruiser History on Facebook
The LandCruiser History | Facebook 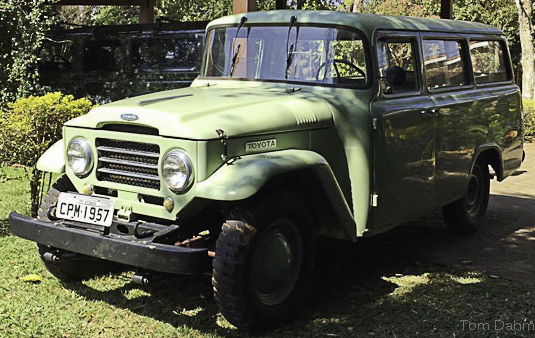 Anybody know the VIN number on the frame?

This is an 1957 Toyota Land Cruiser FJ-25 made in Japan with special body made up order in Brazil.

The FJ-25 arrived in Brazil in 1957 imported by the Sociedade Comercial ARPAGAR, the owner was Mr Ichiro Nashitami. He was Responsible for the representation of Toyota trucks and Land Cruiser for Brazil.

The body of it was built by a local company called ALCAR LTDA based in Sao Paulo, Brazil .The whole structure is made of wood, as in the British car. It's amazing the quality and finish they did in this body .

She belonged only two owners. The Land Cruiser was never restored, is a unique car that remains to factory characteristics. Now she's with 74,000 original kilometers, every kilometer is noted in the logbook writing since his arrival. I keep the maintenance of the FJ- 25 in order weekly drive the car and run it. The Toyota F -Type engine runs like new, electric is the original and remains 6 Volts. The interior has all the floor working on wood. The seats have the original tissue and are in good condition . The panel has all the original tools of the Toyota , a curiosity is that it came from the factory with the steering wheel of rare and unique BJ .


The car is in Brazil , Please feel free to contact with any questions at my email : m.almeidajunior@yahoo.com

He has a particular soft spot for the Toyota Land Cruiser, which also has a long tradition and a great reputation in Brazil. Toyota had already exported the Land Cruiser to Brazil in 1955: The Japanese Ichiro Nashitami founded the “Sociedade Comercial Arpagral Ltda.” and took over the representation for Toyota Trucks and the Land Cruiser. After the new Japanese all-wheel drive was well received on the South American market, Nashitami-san convinced the Toyoda family to take the next logical step: From 1959, the Land Cruiser FJ25 was assembled at Toyota do Brasil - in the "Completely Knocked Down" assembly, i.e. on The basis of the completely delivered kits. Due to the rapidly increasing demand in South America, however, the decision was quickly made to set up a dedicated, in São Bernardo do Campo, Brazil to build complete manufacturing. In 1962 the time had come: From then on, the J4 was produced as a “Toyota Bandeirante” at Toyota do Brasil, from 1968 even without any parts from Japan.

The early years were wild and the Toyota men were very flexible with the Land Cruiser: if a new purpose came up and the idea was good, the Land Cruiser was adapted accordingly. So very different versions developed for all possible areas of working life. 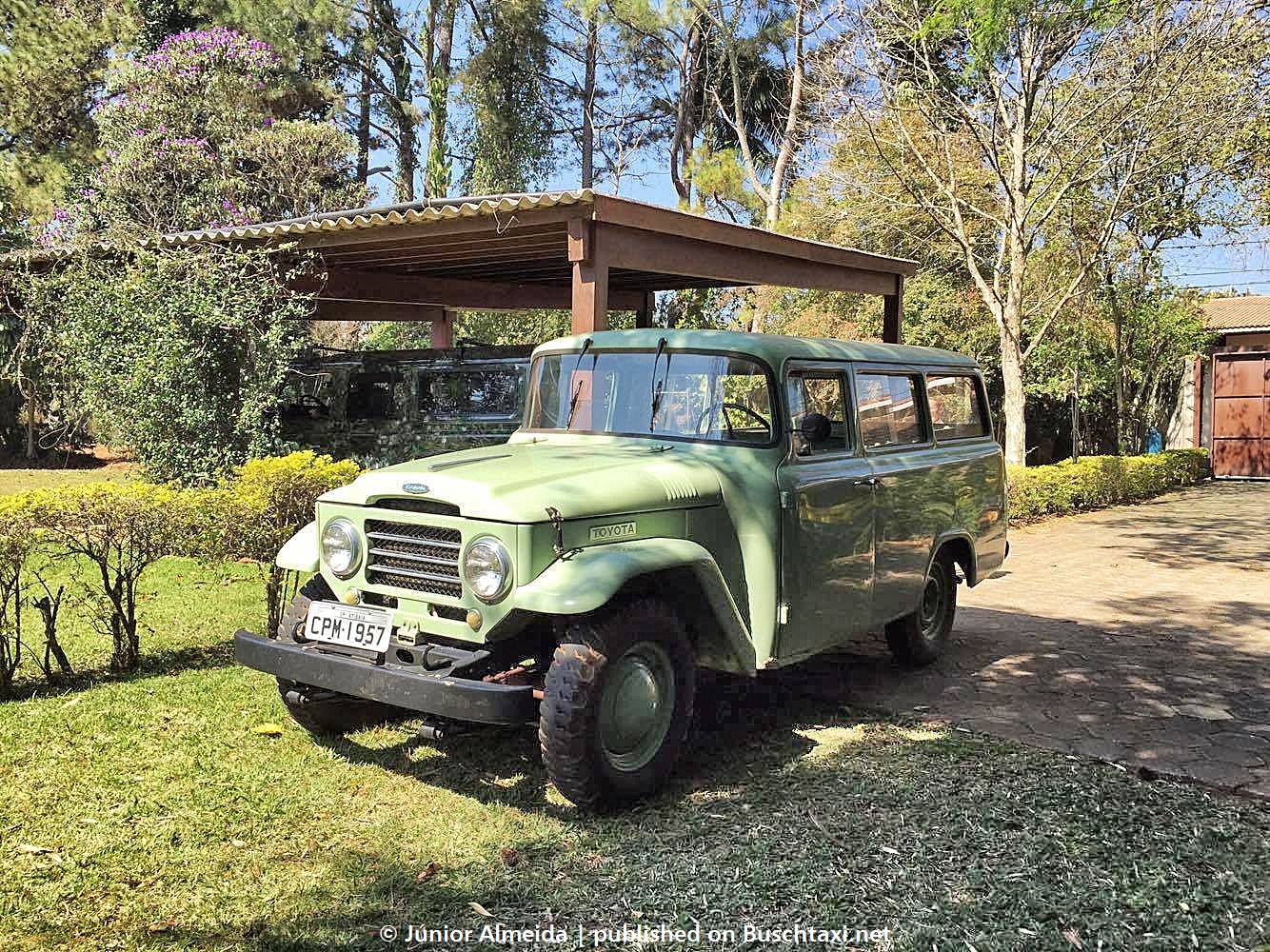 What we see here is difficult to describe: A J20, sure, but only up to the A-pillar on the outside. The rest is ... unusual. This is because this ("according to the state of the investigation") is a one-off. Júnior has carried out extensive research and has so far determined the following story: Nashitami-san probably took a 1957 imported FJ25 in the "Chassis and Cab" version (ie chassis and cabin as the basis for further superstructures) and commissioned the body specialists from ALCAR ltda. in Sao Paulo with the renovation: the frame was obviously extended, the complete structure of the structure was made of wood, and there was a body panel. The rear (i.e. the tailgate and the corners) was obviously made by the Volvo PV445(with us Volvo Duett), a license build from Volvo Carbrasa in Brazil. It has not yet been possible to determine where the windscreen, roof approach and doors come from. In any case, the result is a really extraordinarily beautiful station wagon with balanced lines and a lot of space in the interior. As with the later FJ45v, the body was widened right after the bonnet to create more space. The driver's seat, the folding front passenger seat and the back seat had space for 6 people, and even a lot of luggage fit behind the back seat. There's no question about it: someone worked here who knew exactly the proportions and lines, and the result is unique! 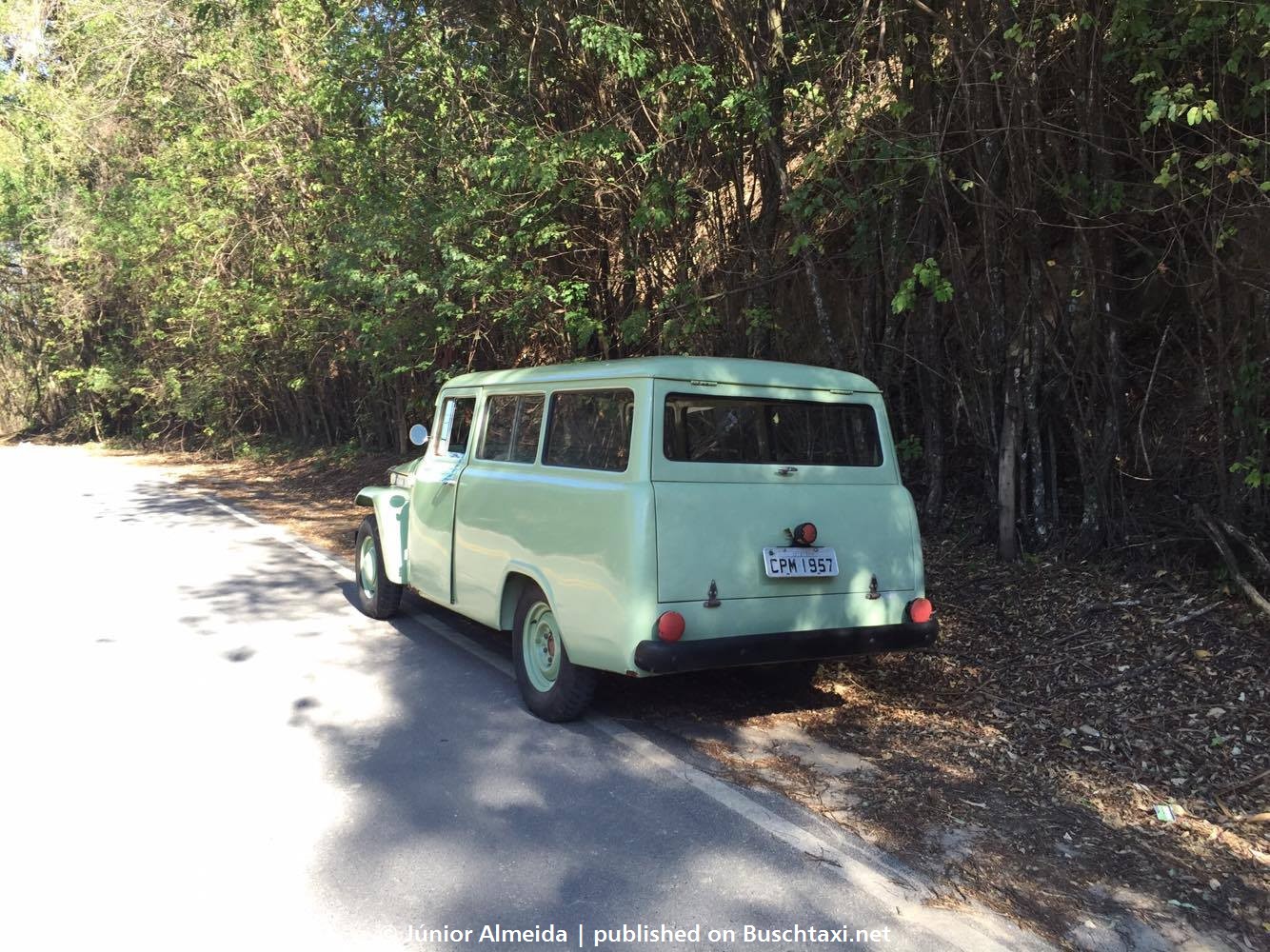 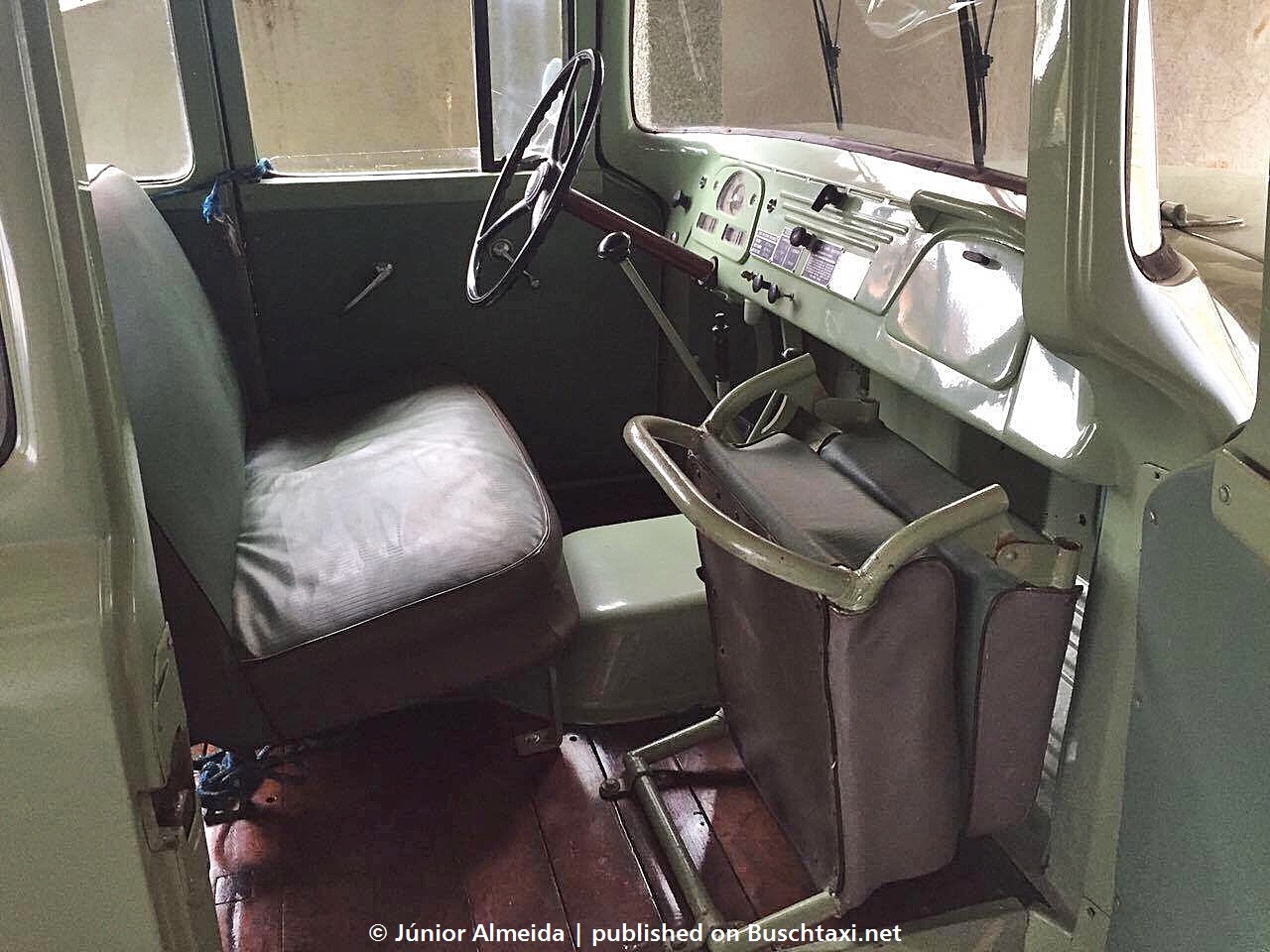 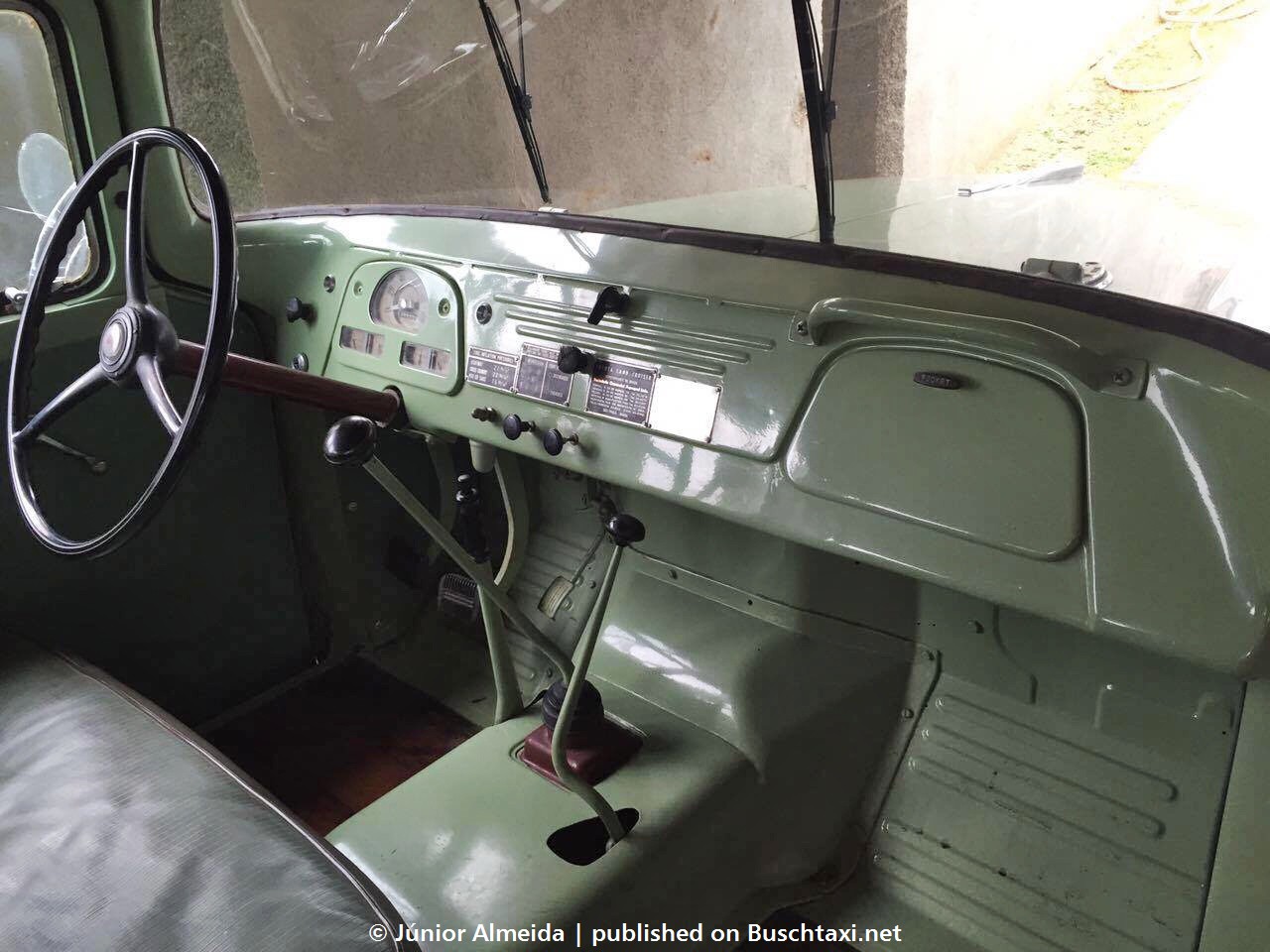 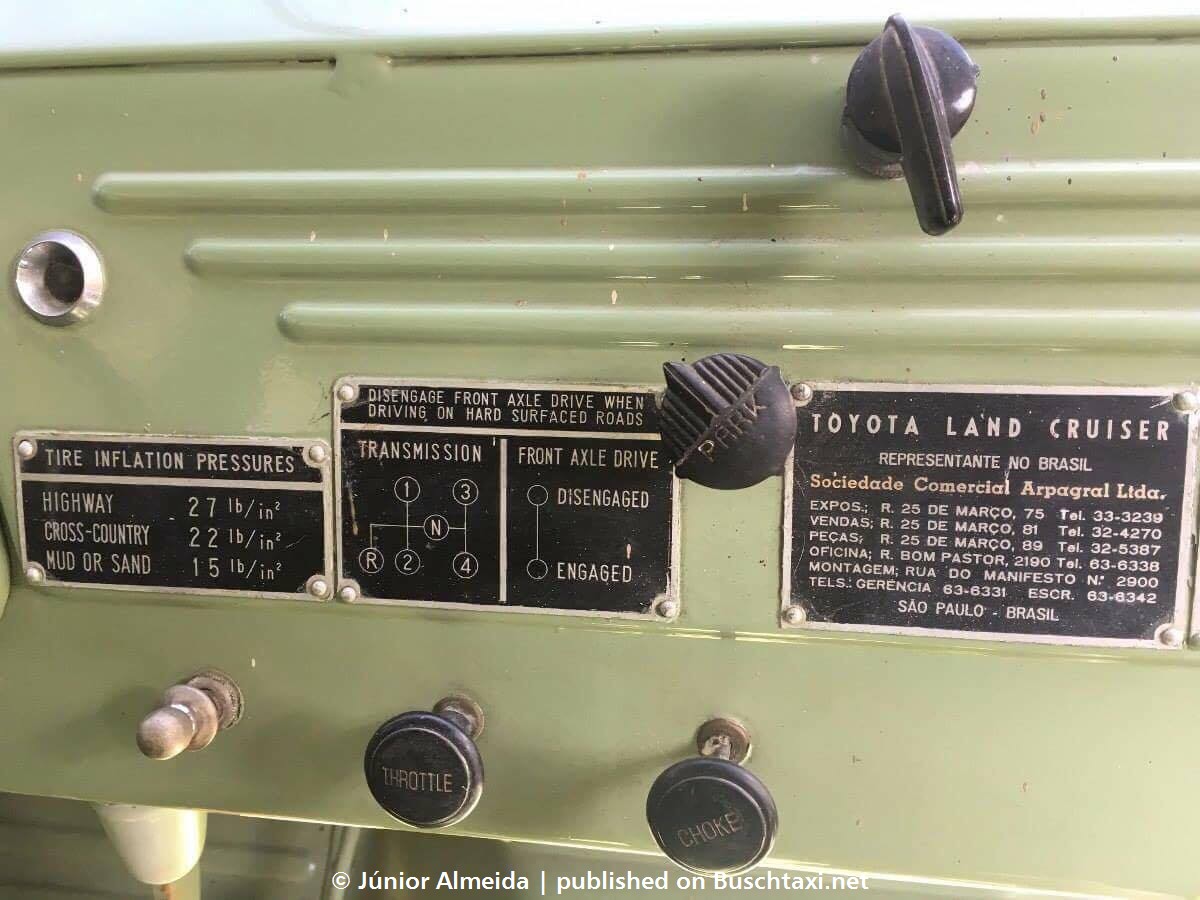 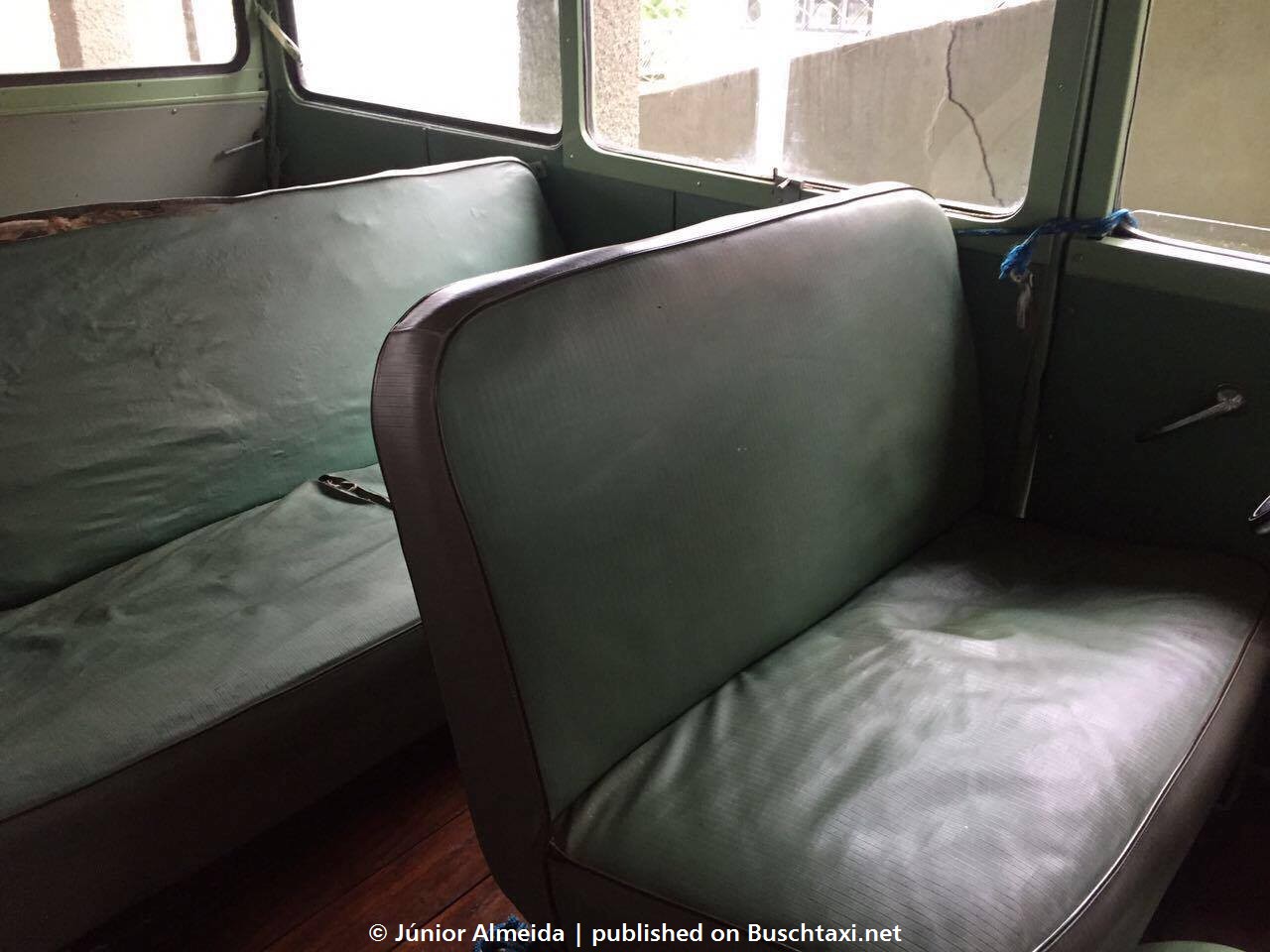 Manufacturing quality and finish are also very high, according to Júnior, and that this magnificent piece in its unrestored (!) Condition looks so outstanding is due not least to the demonstrably only two previous owners, who obviously handled it with more than careful care.

The bush taxi will continue to accompany Júnior's research: the history of this Land Cruiser is worth writing down in detail! 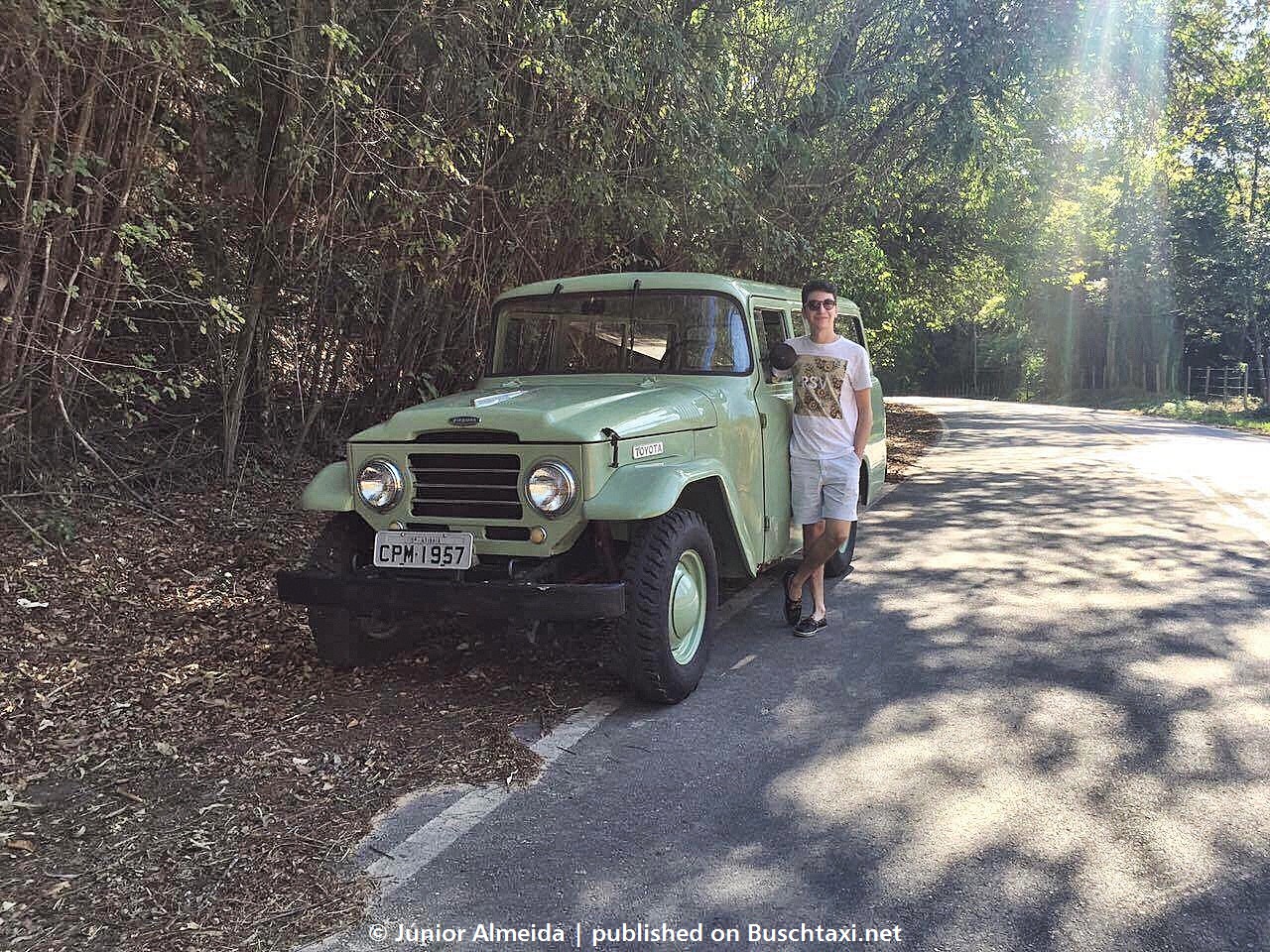 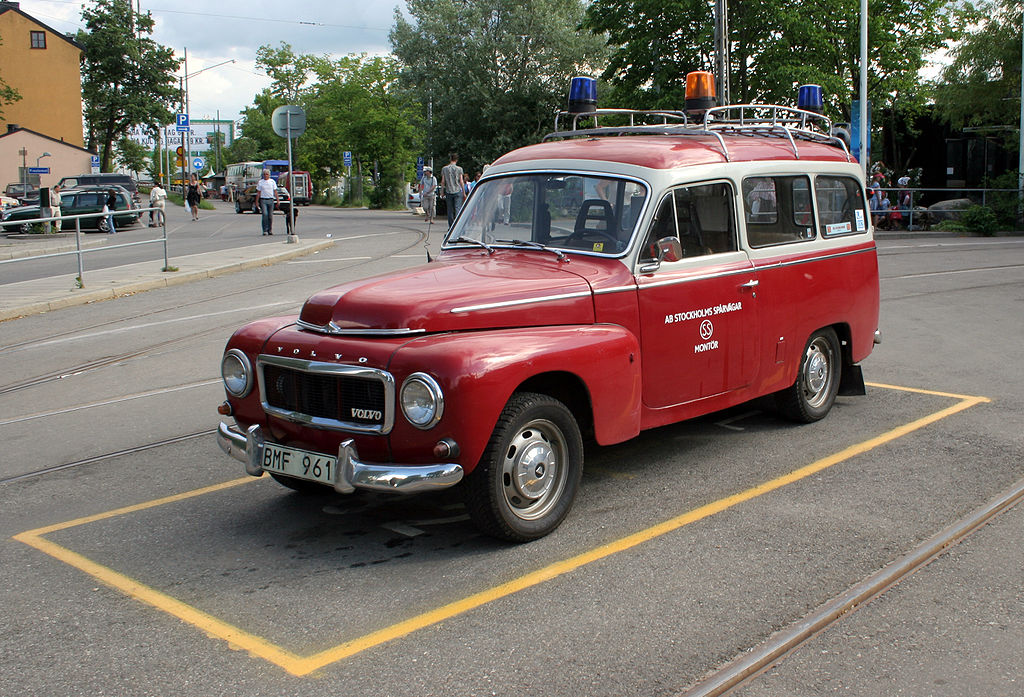 and lift gate as talked about at buschtaxi: 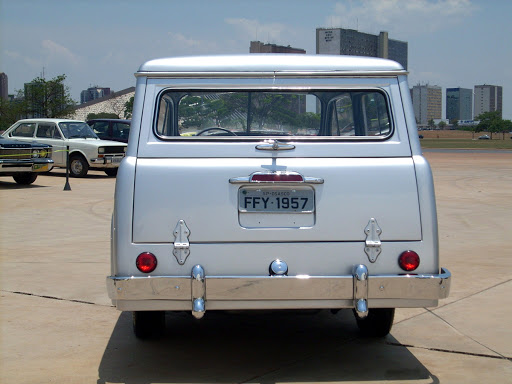 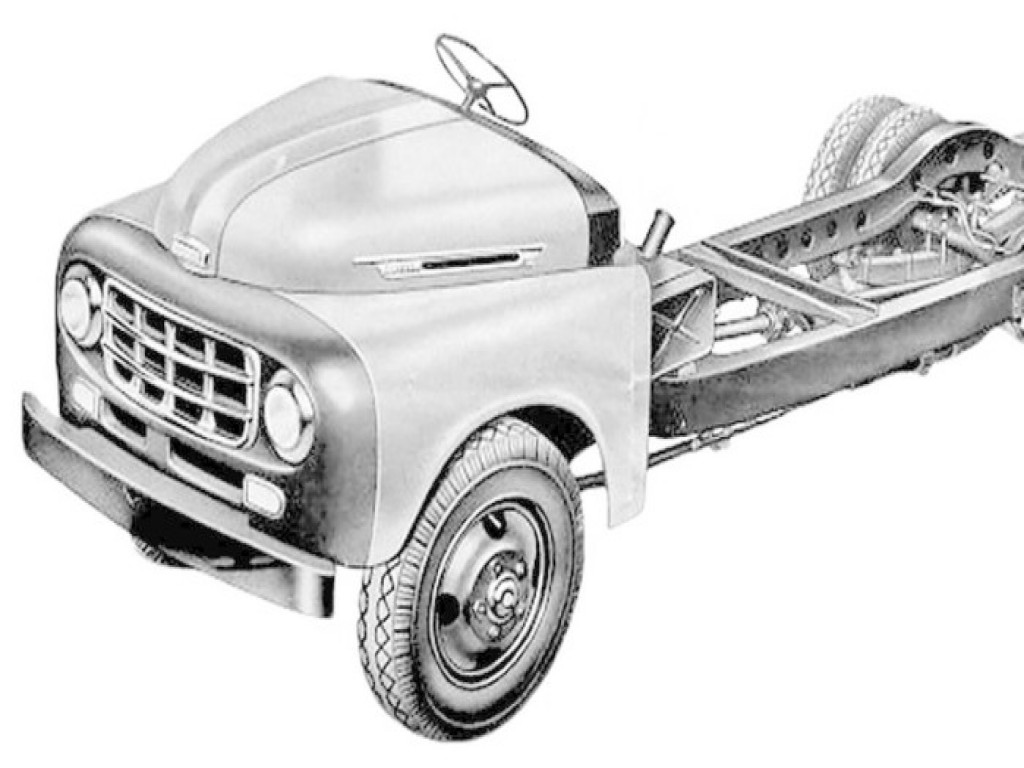 " Country was the first to have a carmaker factory outside Japan.

Brazil was the first country to have a Toyota factory outside Japan, in 1958. Before that, however, the brand already had an exclusive representative here: it was Sociedade Comercial Arpagral Ltda., Whose main business was to import vehicle chassis Toyota commercial vehicles, adapt them with Mercedes-Benz diesel engines and send them to bodybuilders who transformed them into minibuses and stocking. The same importer also sold chassis from Isuzu - Toyota's rival factory in Japan.

Arpagral also brought the Land Cruiser FJ-25 jeeps with a six-cylinder gasoline engine that Toyota had cloned from the Chevrolet. The chassis could be dressed with Brazilian bodies to the customer's taste. Some Toyopet Crown passenger cars came.

Led by Ichiro Nishitani, “a Japanese naturalized Brazilian energetic”, Arpagral's businesses included a fishing industry on Ilha Grande, graphic activities and even the manufacture of socks and toys.

On November 1, 1955, GLOBO published a note that read that Toyota was interested in setting up a jeep factory in Santa Luzia (MG).

The idea went ahead - not in Minas, but in São Paulo, when, according to a report of April 26, 1956, a vice president of Toyota and an executive who would work with Nishitani to set up a mixed-capital company arrived from Japan. .

The production of the Land Cruiser started in 1958. In 1962, a new factory was opened in São Bernardo do Campo, the jeep got a Mercedes engine and was renamed Bandeirante.

Because of his other businesses, Nishitani (who became vice president of Toyota do Brasil) went bankrupt in 1967. Until he died in 2002, at the age of 85, he worked in an attempt to rebuild himself.

interesting things you find when looking for something completely different lol 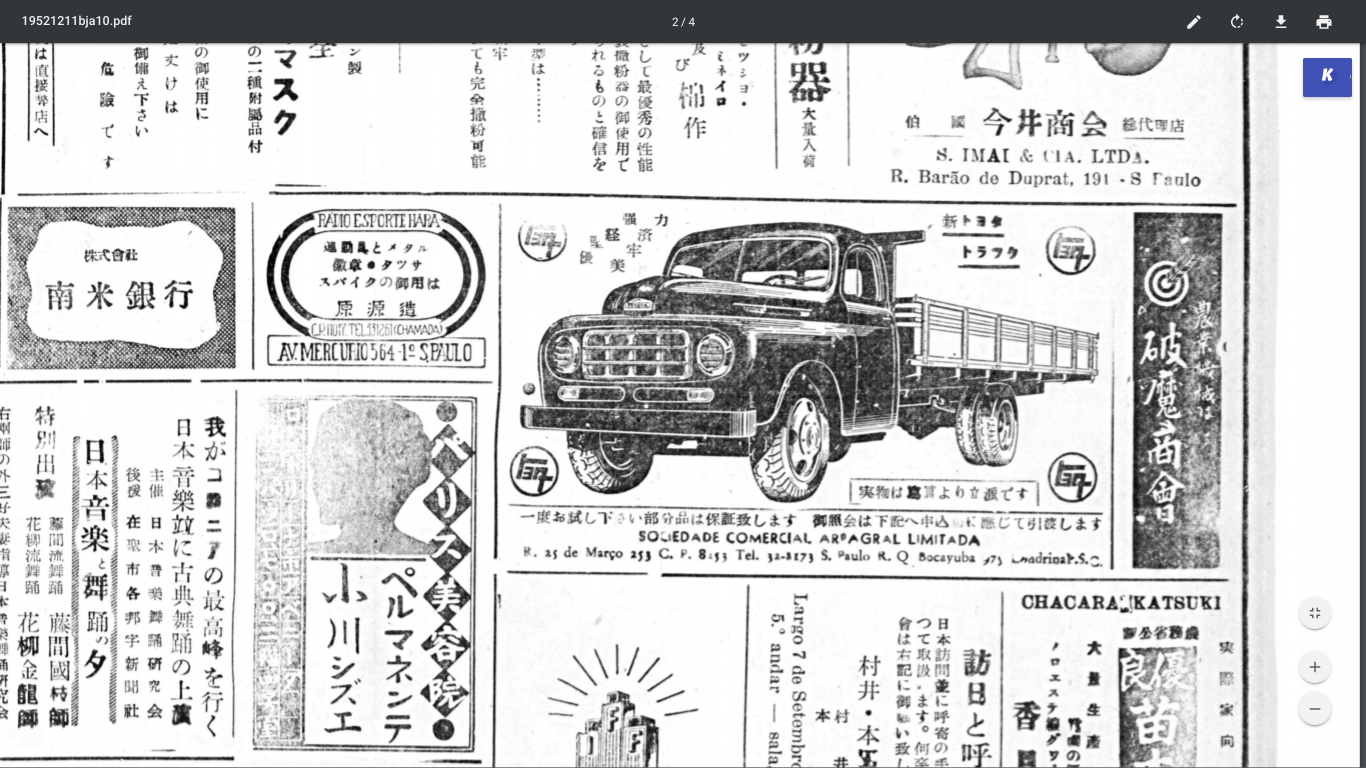