Any pictures of the Dome Light Switch Disassembled? - LEDs in Dome Light Glow/Flicker When Off

I bought some cheap warm LEDs off of Amazon for the two dome lights in my '94 FZJ80. When the switch is in the off position the LEDs stay barely lit and flicker. Appears to work fine doors closed in the door position, LEDs on when door is open and no glowing or flickering when closed. According to the wiring diagram I found here: Connecting Map Light to Dome Light, I wouldn't expect there to any potential across the circuit or current leak. I took the light fixture out, but it is unfortunately plastic riveted together so I don not want to disassemble it. Has any one taken one apart? Any pictures? I am wondering if there is something allowing the circuit to complete inside the switch itself.

I was also thinking about placing a zener diode in series or resistor in parallel to try and "fix" the issue. However, I would like to solve the problem more than patch the symptom. The big surprise is that I haven't killed the battery. It sits long enough I would think the current draw, though small, would be enough to drain the battery over a few weeks with the incandescent bulbs.

Any thoughts? I tried search but most issues were getting the lights to come on, not off. Thanks!

PS The issue seems to be occurring in only one of the two dome lights. Will be swapping locations to try and diagnose more this weekend.
Sort by date Sort by votes
C

Sorry i don't have any pictures but when you had it out. What where you getting with your multimeter checking continuity ?
Upvote 0 Downvote 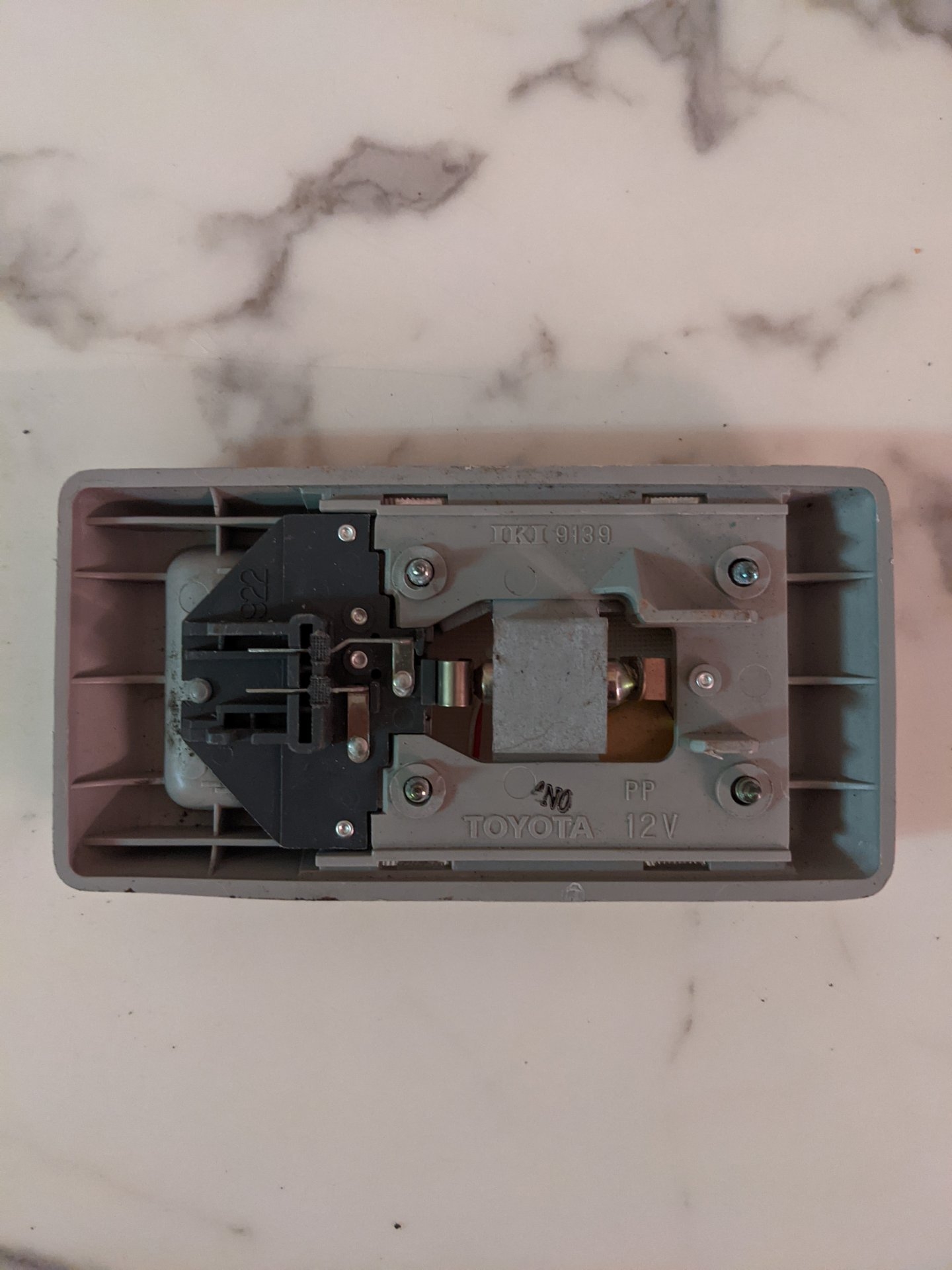 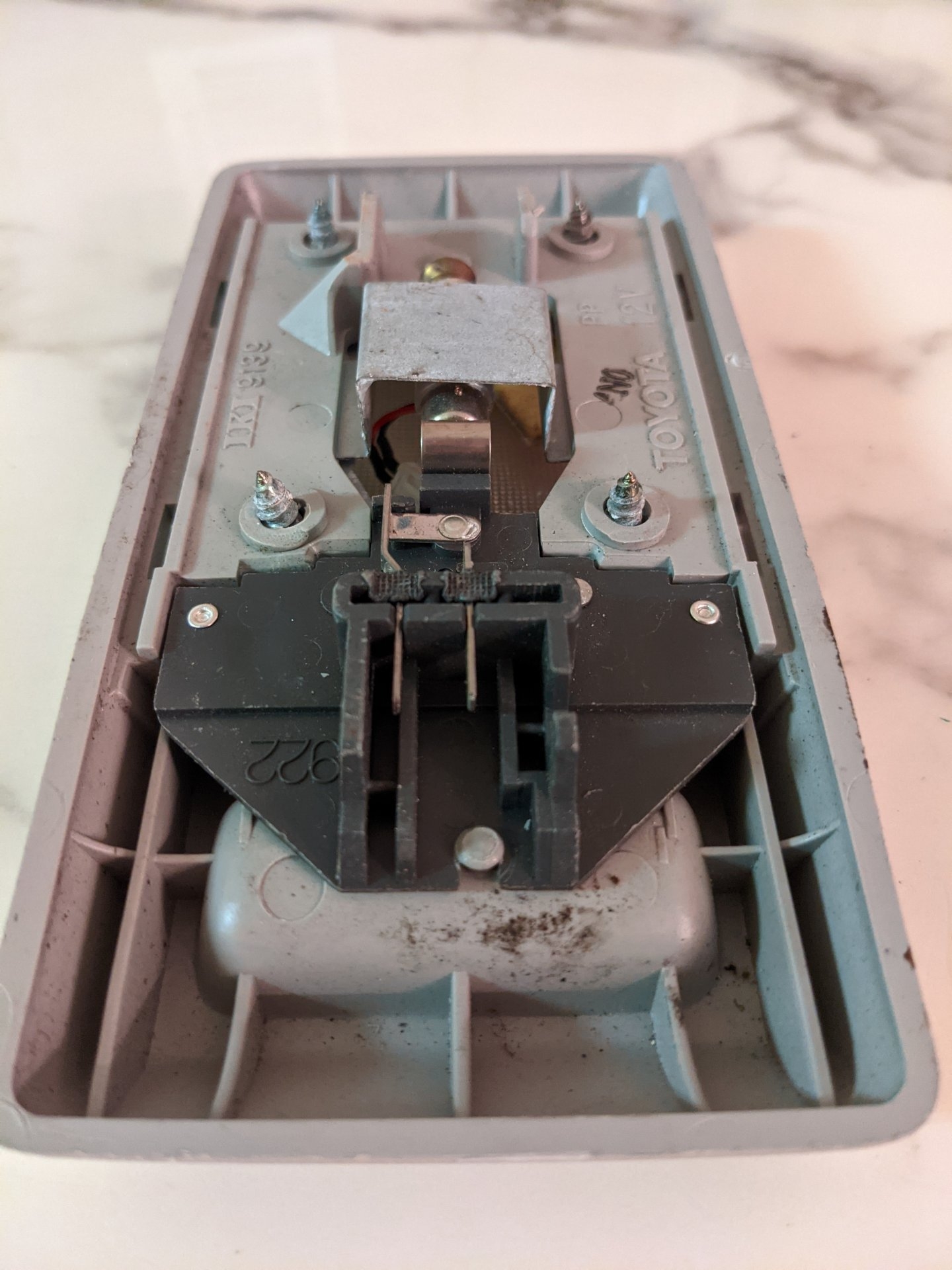 clx16 said:
Sorry i don't have any pictures but when you had it out. What where you getting with your multimeter checking continuity ?
Click to expand...


Will be digging out the multimeter this weekend for further testing. I will also be swapping the front and rear switches to see if its the switch or wiring issue. Symptoms lead me to think its the switch. Will update with results.

@enox Thanks for the pictures. I was able to remove the switch, I was just hoping someone had disassembled it (drilled out the rivets). I was wanting to get a look at the actual switch mechanism to see how it worked.

Also, yours looks different than mine. Mine has a bar and appears to ground itself through the roof. I will get a picture if I can and post it with any updates.
Last edited: Jun 11, 2021
Upvote 0 Downvote
R

Was able to find the multimeter and test the switches. Both switches show a small voltage in the off position ~0.01 volts and 0 volts when in the door position with the door closed. If I can find a spare switch for cheap I will take on apart and see what's going on inside. It's weird that the off position doesn't fully open the circuit.
Upvote 0 Downvote
C

can you remove the switch and just check for continuity? That will let you know what is happening without opening one up, and it will tell you if there is any real continuity even in the off position.
Upvote 0 Downvote

Don't tell my wife how much this actually cost...

This circuit, like almost all on the 80 series, is ground switched. This means that there is always 12v power at the light, the switch is on the ground leg. So if you have a bad door switch or something else allowing a weak ground to occur then you'll get what you are experiencing.
Upvote 1 Downvote
You must log in or register to reply here.

Stuttering to start + No A/C...any ideas? (more info in thread:)

No brakes when engines cold!!!