I have a small block chevy 350, a chevy bellhousing, and Advance Adapters ranger overdrive unit which also acts as an adapter to the stock toyota 4 speed. i'm using the OEM clutch master and slave for my 9/75 US-spec fj40.

I'm 75% through a restoration (ahem, "restomod" for the legalistic folks). I had the engine out at one point, and decided to replace the clutch. I have learned that I didn't do enough research and should've bought Downey's low profile clutch, since the toyota master/slave doesn't produce enough travel to totally engage the clutch.

I'm trying to find a solution that doesn't involve pulling the engine out and redoing the clutch. I'll do it if I have to, but would rather not.

I've read a bunch about using an earlier model clutch master, which has a 1" (or 13/16"?) bore, but keeping the current slave. Some people have reported success with this approach, but some have said that it causes the slave to puke out the push rod due to excessive travel. I've also seen people speculate that it might cause TOO MUCH travel.

The threads i've found are pretty vague and often don't involve people following up on whether things worked out for them. So I'm hoping you guys can share your experiences. If not, I guess I'll just buy a new clutch master, see what happens, and post it here.

Continuing my research... I noticed that SOR sells an updated clutch master, slave, and lines specifically for chevy V8 conversions. See part number 330-918 on this page:

Does anybody have experience with this setup? It looks a whole lot like the '70-'75 clutch master. No idea which slave they're using.

alright, well I got impatient and ordered the SOR kit. I'll report back.

You might also look into the slave cylinder mount. I initially used the AA one, but when I was under the cruiser bleeding it, you could see noticeable flex in the mount which I'm sure resulted in decreased throw. I bought the beefier one sold by BTB.

Thanks @mtquivr ! Did you buy this one? Looks like they're sold out. 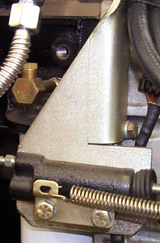 THIS BRACKET BOLTS TO THE SIDE OF THE GM NV4500 BELL-HOUSING AND MOUNTS THE ORIGINAL TOYOTA FJ40 LAND CRUISER SLAVE CYLINDER IN PLACE. BRACKET COMES WITH HARDWARE AND INSTRUCTIONS.

I think mine was ver 1.0, it didn't have the mount for the spring.

Thanks @B y r o n . I already sprung for the SOR parts. I think it has the 13/16" bore- not as big as the early brake master (which I believe is 1"). If the SOR kit doesn't work, then I'll try the brake master. I got scared away from that because I believe it uses a different size fitting and I'm lazy and don't want to fiddle with bending and flaring hard lines if I can avoid it.
You must log in or register to reply here.