I’m toast on this truck.
Any assistance here cuz my head is fried.

Seeking hands on help in CT.

Also along the mention of motor mounts I can’t help but wonder about the appearance of my leaves from ahead. Both are shoved way out toward the outer edge of the shackles. They’ve been like that since I bought it. I always wondered if that was significant of something misaligned. 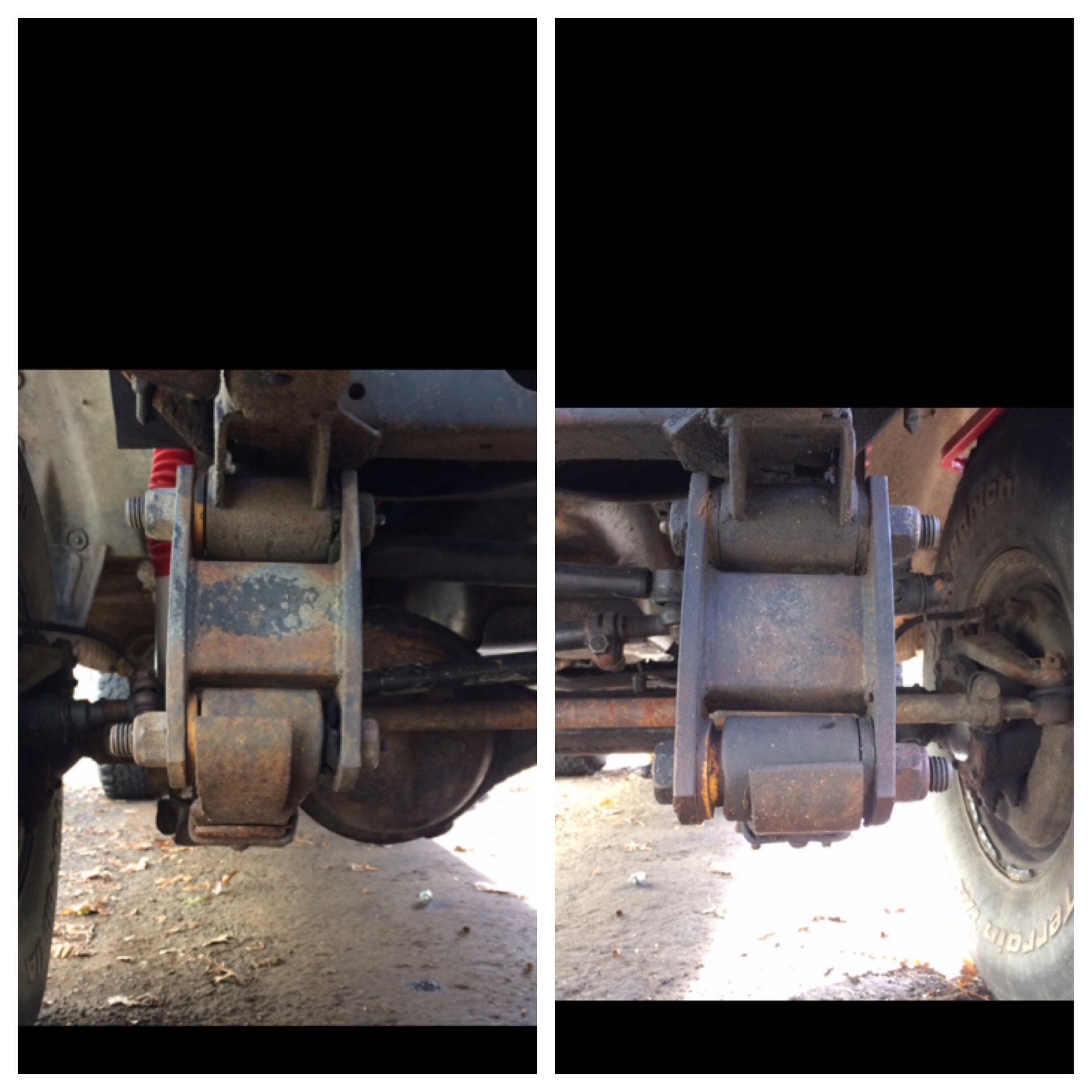 No technical savvy, per se just brain storming. The shackle closest to the diff has a slight curve towards the inside of the truck. I can't see the same curve on the other shackle, if it has any curve at all. Going way out on a limb here but maybe the PO jumped or bottomed out the truck really hard causing the curvature and misalignment. If the truck landed more towards the passenger side and then rolled horizontal it might explain the curve in that first shackle. Just guessing here.

The bushings look toast. Just time to replace them. Check the fixed end as well. Need 6 per spring. You may consider new shackles if they look super corroded. The shackle pins would be the weak spot.

Kurt at CruiserOutfitters can fix you up with 60 suspension parts.

Good to know all that... The leaves are the least of my issues right now. I’m ticked cuz I’m still fighting a vac leak.
3

looks like the PO overtightened the shackle bolts, those are regular bolts drilled for grease. there is no shoulder on them so when overtightening them it bends the shackle ears inward
not sure what is happening with the second leaf in both packs. there is a clamp visible in the pics, doesn't look like it is holding things in line properly.
a few more pics might help.

I say take a break from your truck for a while. A few weeks at least. Set it aside, so to speak. It's burning you out. Once frustration and anger seeps into the restore equation, it's pretty much downhill after that. Working on the car becomes a hate mission, and nothing good comes from that. You should look forward to working on the truck each day and enjoy the project you're working on. If you feel that's gone, then set it aside and don't touch it for a while.

I may be wrong, but it seems like you're having to do some things twice if not more to fix something. That's a red flag right there that you're not being careful enough the first time around (we all do it, myself included). You're wasting your time and creating frustration. It's frustrating for anyone.

I think if you slow down a bit and carefully go over all the possibilities of a repair before even touching it (persistent manifold leak) then you'll hit home runs on the first swing.
Then after you've fixed some little thing, go over it again in your mind ensuring that nothing was overlooked. I've caught my own mistakes in the past by doing that - a mental audit of a repair. And instead of auditing the repair after its completely done, do it in sections. Like after something gets bolted up. Then move on to the next section.

From my experience, I found that the faster I tried to work, the more I hated the project and the more likelihood I would screw up or injure myself. It wasn't until much later on in life when I had the luxury of time that working on the cruiser became a fun puzzle to figure out. Very slow and careful. Like chess. Really slow. No mistakes, No rush. The thinking part can often take a lot of time. If a bolt took an hour to deal with - well that's how long it takes. The slippery slope to hell wrenching begins when we try to turn a time consuming project into a 15 minute swearfest (not to say that's what you're doing).

Those are my thoughts at least.. though I may be off the mark and full of it. But with the correct mind set (Zen Wrenching) you'll be AMAZED how easy and fun working on the cruiser can be - and how everything will then work as it should.

Land Cruisers have feelings too. He's probably upset you're dissing him online so he's loosening his bolts and breaching his gaskets out of spite. Give him the love he requires and you'll be pleasantly surprised what he gives back in return. Ha!

I've disabled iMessage on my phone so I no longer use it with anyone.

I have a set of stock height greaseable shackles you can have for free.

That and bushings along with a set of new pins will get you most of the way there.

Thank you @HemiAlex... I do have bushings. Knew I needed them at some points as I could see the condition of what’s there. The pins I’ll add to my list.
Thanks @OSS. You hit the nail as usual.
I do have a fire under my ass worrying that stepping back and letting the truck sit is gonna screw up all the beautiful shiny new parts in that head. Valves, seals, ect...

The shackles and bushings aren’t a big deal. Get a map gas torch and a 5 lb engineers sledge and make magic happen.

I recently replaced my spring bushings. The springs looked offset like yours...replacing worn shackle bolt sleeves and bushings straightened them up. Here is what I did...rebuild or replace stock shackles??

My front leaf springs look exactly the same as your pictures. I have chosen to ignore every smell and sound for a couple weeks and just drive around. I am with @OSS about getting to the point you HATE THE FLIPPING THING SO DARN MUCH!!!!!!! My 80 was a time crunch but it was a fun four months. I learned a lot (most of which I have forgotten) and accomplished things I never knew I could do. The 60 in its utter simplicity has me utterly baffled at times. Currently I am smelling a slipping belt (original to the resurrection) and the beginnings of blue smoke coming from under the dash. Good times abound!!!!! Keep up the great work! Oh, and I have taken belts off the front of Buster Brown so many times since August that I am thinking about interviewing for a pit crew!

I was just saying today how much fun it might be to have a party game where someone is blindfolded and is placed in front of a cruiser to see how well s/he can dissemble parts off the engine. Sounds like both you and I’d do pretty good at this game.

NeverGiveUpYota said:
I was just saying today how much fun it might be to have a party game where someone is blindfolded and is placed in front of a cruiser to see how well s/he can dissemble parts off the engine. Sounds like both you and I’d do pretty good at this game.
Click to expand...


Like that time when Fonzi was temporarily blinded. They took his Triumph to pieces and he put it back together blind. I'm getting to be that way with a 3FE oil pan....

Hang in there Kid. As suggested step back take a breather set it aside for a bit. everyone who wrenches on these trucks has gotten to
the point where you think to yourself what a nice fire this sum'bitch would make. I know I've been there more than once.
Your build thread has inspired me many times. Stay in the groove the satisfaction when your done will be worth it.

NeverGiveUpYota said:
, loved his "eehhhhh." 3FE that bad huh? How many times so far?
Click to expand...


I've done it wrong a second time. The gasket squished out at the rear main bearing during final tightening. (As a thread here warned - advice not heeded.)

Eating the elephant one bite at a time.

So for anyone looking at this thread now or in future... my primary reason for starting it was continued vac leak at the manifold hence the link into the Yankee Toys club section. The wtf, leaf springs photo was a cog I threw in because I have a bit of a gerbil in the wheel way of thinking. But I do appreciate all the suggestions regarding my suspension ugliness.

I cured a vacuum leak once. How? Ditch the gas and go diesel.
T

Prioritize your repairs. Do the necessary items first. If you hit a wall, tackle the ones you know you are able or time allows. I've read your posts here and your ahead of me in guts to tackle projects. Pray for some peace and spend quality time with your son, that's what's most important.
Our toys are for fun and excitement. @OSS really put things in perspective. Her is my suggestion. Go back and look at your thread from chapter one. All I see is someone who has guts, fortitude, and provides a great narrative to her accomplishments.

Keep it up, your thread, @HemiAlex, etc are great reads. They keep me on task.

If you make it to N Texas, your invited to stay ..but you have to bring your Cruiser.
You must log in or register to reply here.