So you wanted an overhead switch panel?

The pre-03 Land Cruisers (LX too?) came from an era void of the convenience of the HomeLink transmitter. Toyota’s solution: install a little pocket where a stand alone remote can mount. This is a valiant attempt at an elegant solution; the opener is tucked away rather than clipped onto the visor and small opening is left for the user to press the desired button. Fortunately for us, this opening is actually quite deep and stout, allowing for the addition of an overhead switch panel.


For those wanting a visual, this is the factory condition: (photo credit to paulbgardner, I was remiss in not taking a ‘before’ picture). 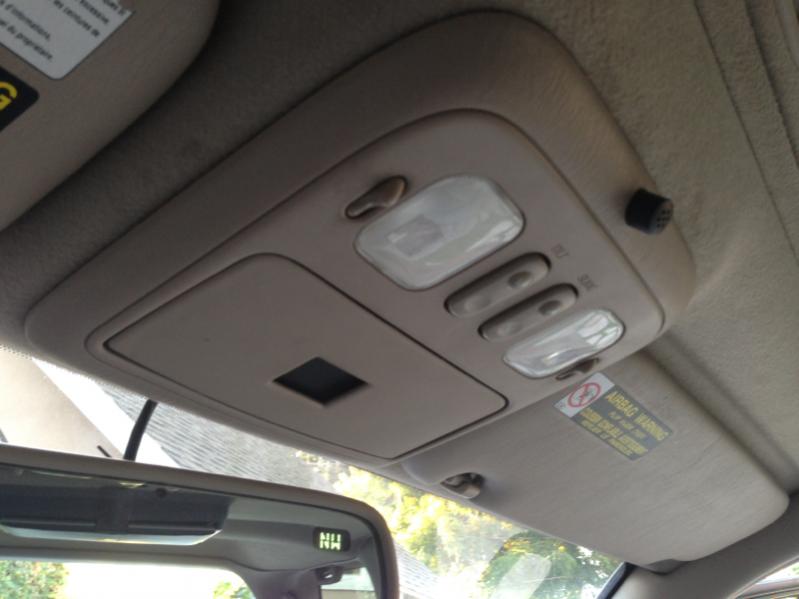 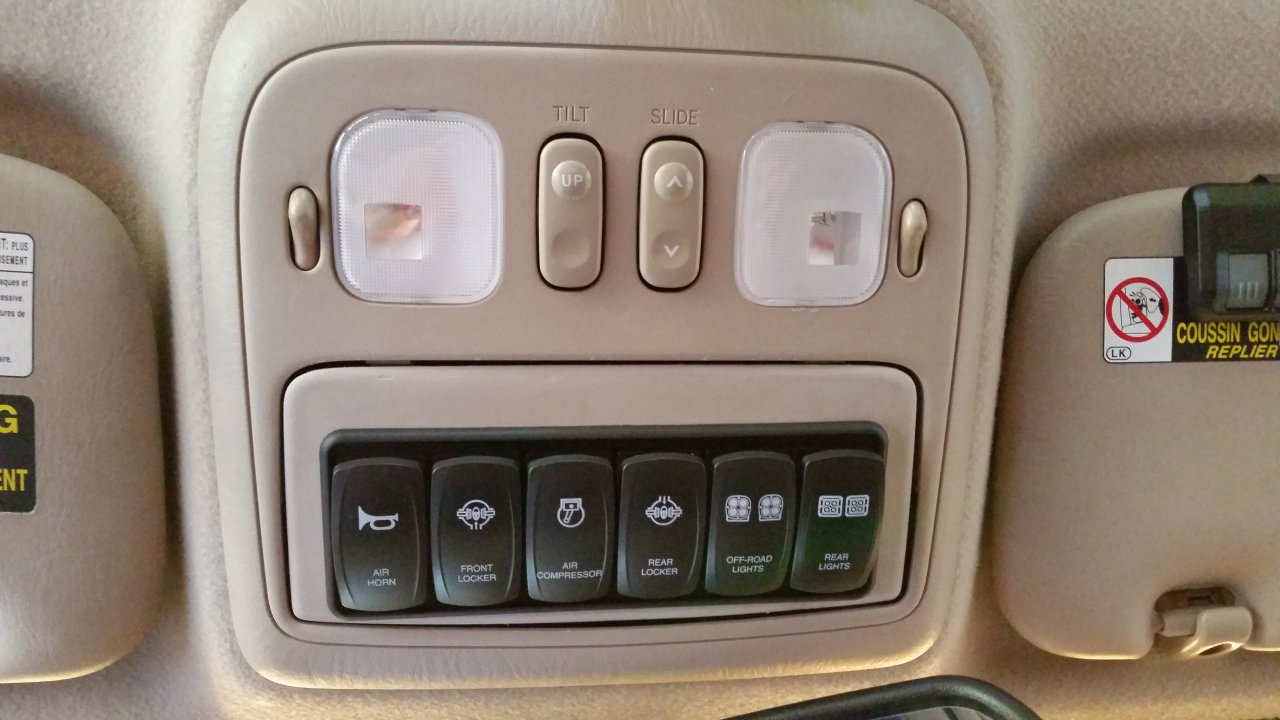 The base Carling Contura rocker comes in many styles (SPST, SPDT, momentary, LED, bulb, etc). Take time to plan out your wiring needs ahead of time so that you select the correct switch. In my case I'm using each to drive a relay under the hood. With the exception of the aux horn all are SPST, the horn is momentary. The base has the option of both a dependent light (one that comes on with the switch) and independent light (one that comes on with the headlights, if wired as such). Those lights can come either as conventional bulbs or as LEDs and in an several color combinations. I chose green for the independent leg and amber for the dependent leg. The green is a fairly close match to the factory dash illumination and is somewhat muted. Those of you with LED dash upgrades may enjoy the blue LED option.

You additionally have a huge array of options of switch cover styles. I chose to go with switches and covers from OTRATTW however there are other good suppliers out there such as Dirty Parts. The great thing about the Carling switch is that the covers can be swapped at a later date if your conditions change.

As for the install process, it's pretty straighforard: (1) cut out the door for the panel, (2) cut out the back of the console for space and wiring, (3) pull wiring up the PS A-pillar, (b) hook it up.

The door entire panel assembly removes easily. Open the door opener pocket (it hinges at the rear) and you'll find a single screw attaching the assembly to the sunroof motor bracket. Remove that screw and the whole assembly can be popped out. There are four compression clips that hold it in place.

Once out make the cuts. First on the front: 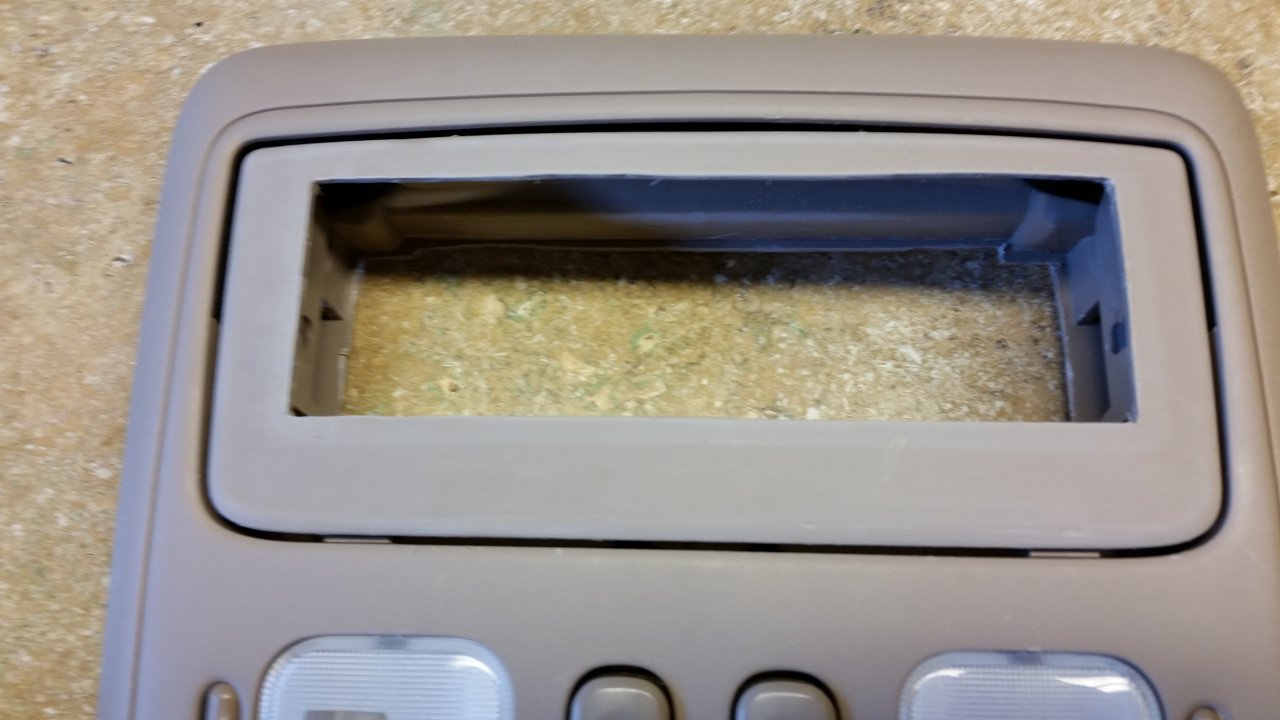 Next on the back. Note: this does remove the factory screw bracket. On my install the four compression clips were more than sufficient to hold it all in place without rattles or droop. Check your condition first if you have any concerns. 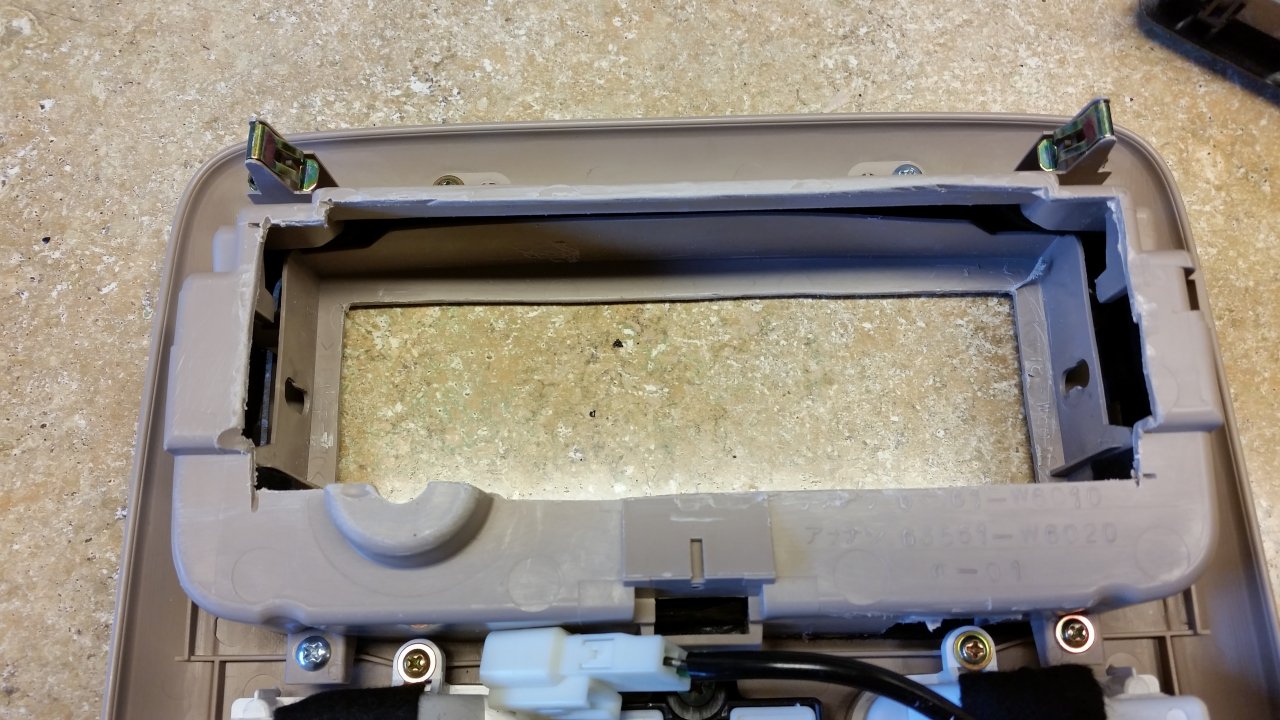 The switch panel has some clips which just click in as you push it into the door. Then the switches just push into the panel. Plan for correct orientation before you push the switches in as it's a bit of a bugger to get them back out. 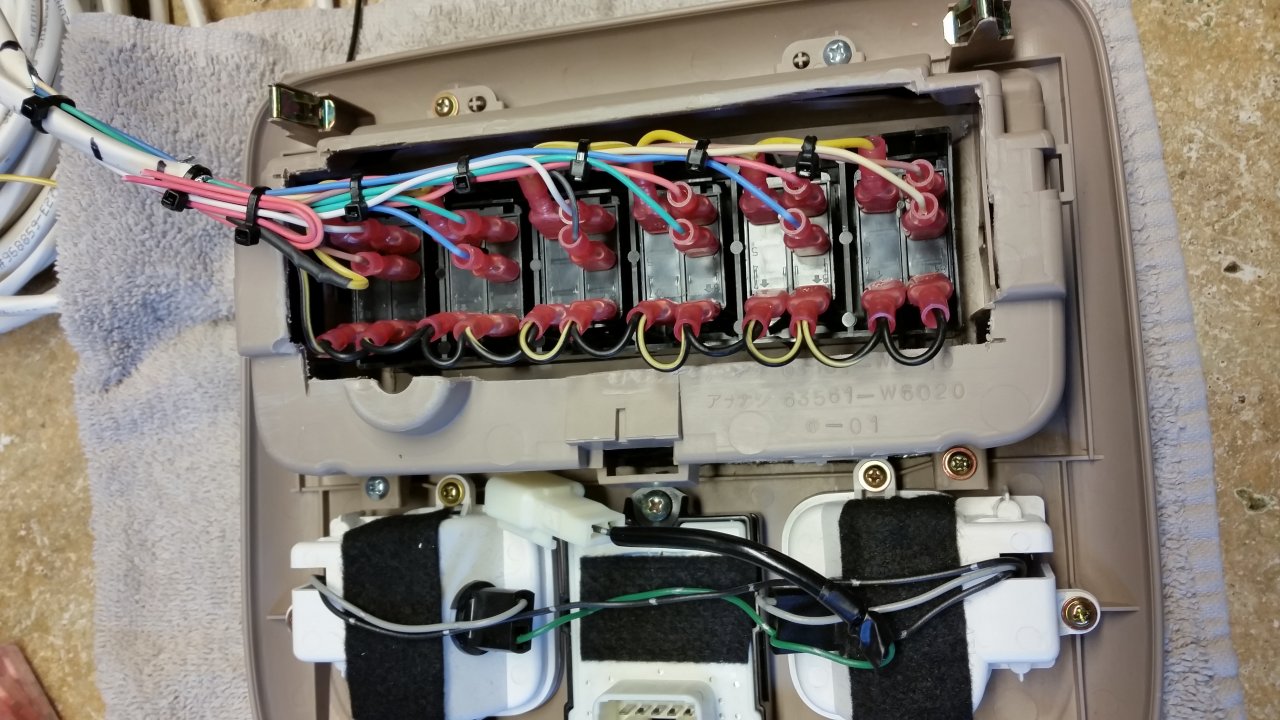 In the above you can see that I connected the independent lights in common (black and yellow wires). Each switched leg (and therefore dependent bulb) has it's own discrete pair. I could have saved wiring by sharing a common 'hot' to the switched legs, but I like the flexibility of running any switch off of any battery should I want. Overkill, yes. But I had plenty of 18/8 and two bundles can easily poke through the nipple in the firewall where the 2nd battery sits.

Note that you will have about 1/4" of space to spare between the switch wiring and vehicle structure using the push-on connectors that I used. There are also 'flag' type of connectors that have a lower profile but are not needed. Plenty of space once you cut out the back of the overhead console.

Also note my application of felt tape across the factory lights. I had an occasional mid frequency buzz coming from that area and suspect it was the light wiring vibrating against the housing. Tape is cheap and it's an easy preventative. IH8Rattles.
Last edited: Feb 20, 2015 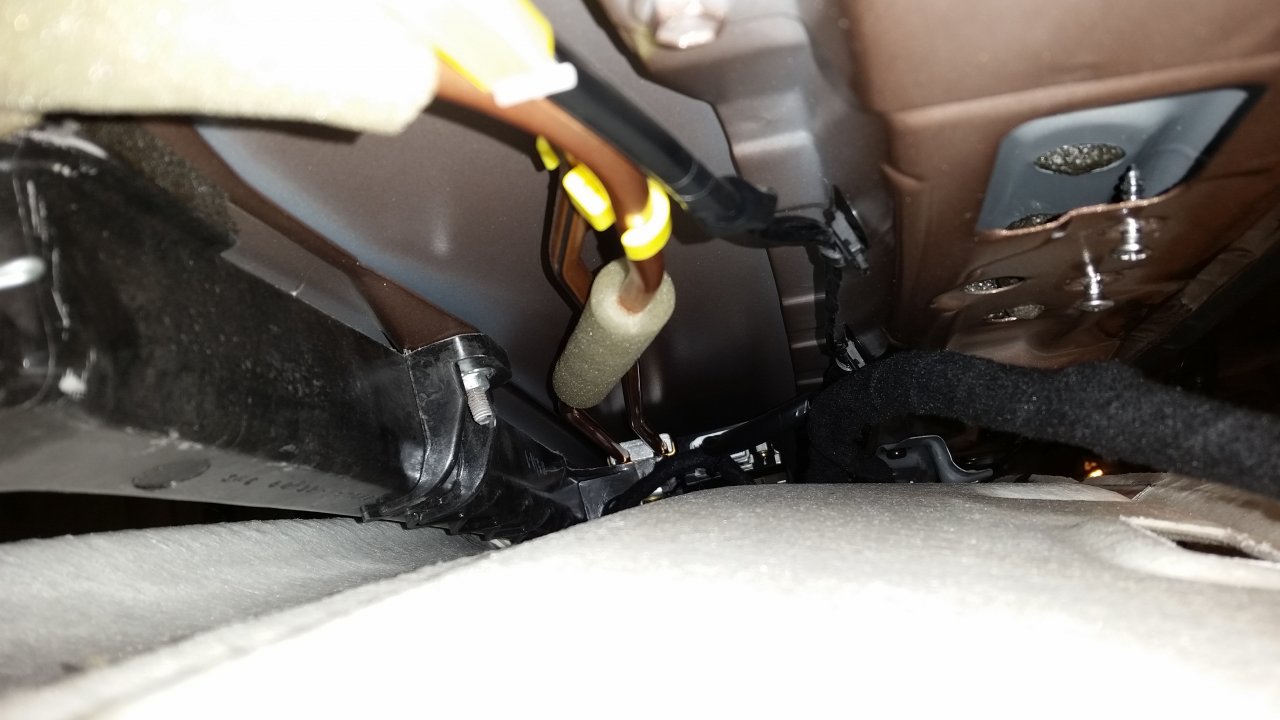 To route the wire, there is a valley above the headliner where the sunroof cables live. Route toward the passenger side and then down the A-pillar and through the firewall. Crappy pic, but forward is to the right. The copper tubing is the sunroof cables. I wrap all of my wiring in felt tape so there are zero rattles.

This is going down the A-pillar next to the sunroof drain tubing. That's two bundles of 8 (16 x 18ga wires). Plenty of room as long as you get it properly fitted into the void. 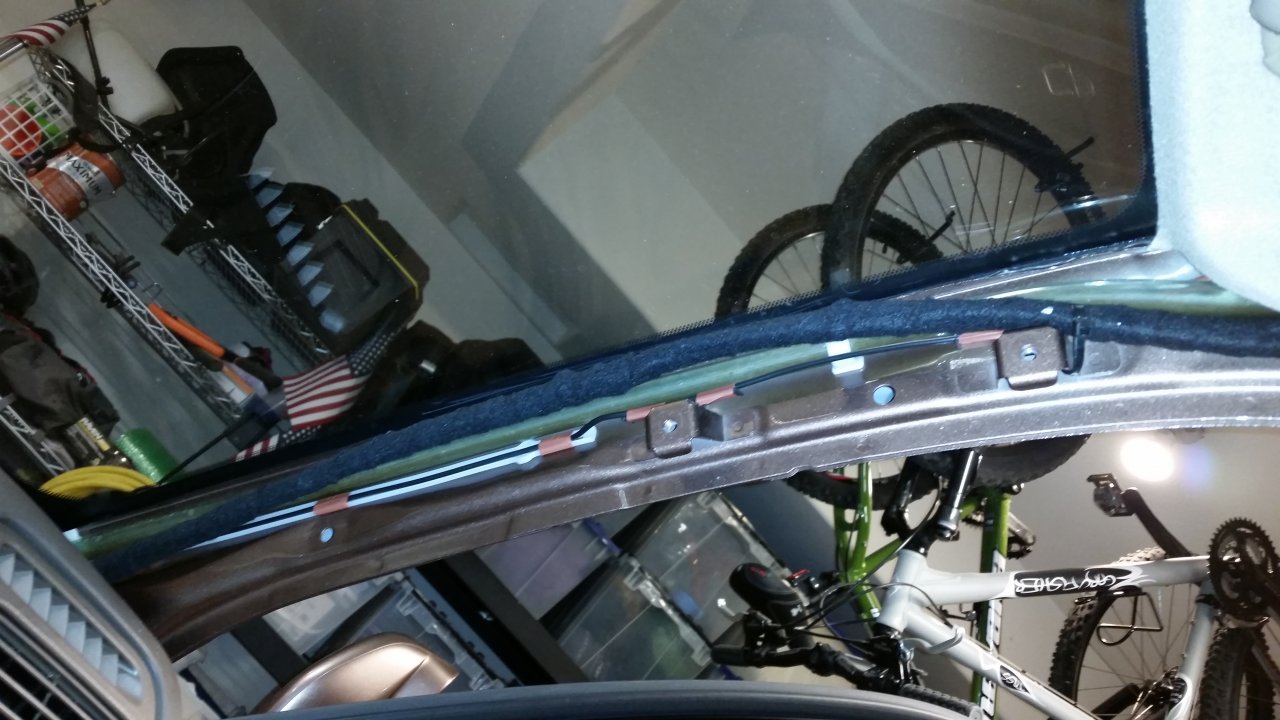 Leave yourself some slack so that it can be easily removed for access later. 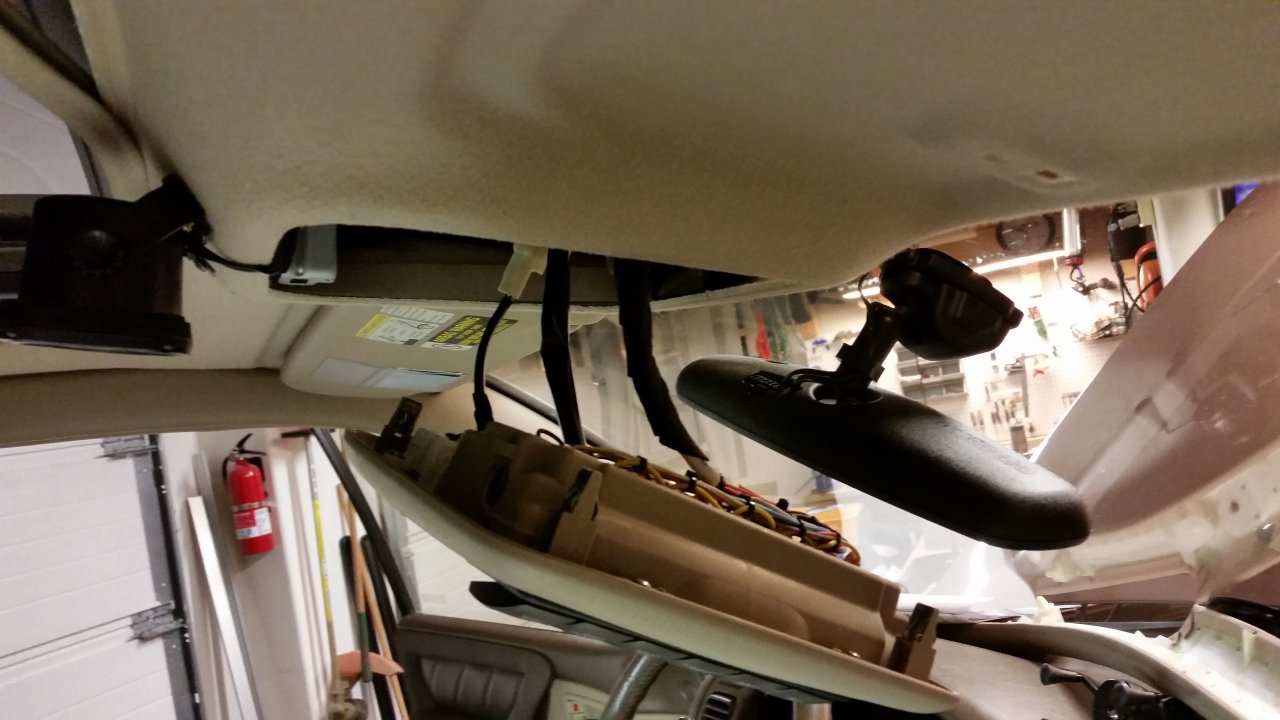 And voila! A finished overhead panel. Nice and tight and great use of otherwise wasted space. And now you can pretend to be the airline pilot you know you always wanted to be.
Last edited: Feb 20, 2015

I believe Spresso may be working on a similar effort. I'm excited to see that as his attention to detail and craftsmanship is an entire level above mine. Dan: feel free to post here with what you come up with and put me to shame!

Visit site
Very nice work. The first pic almost looked photoshopped till I saw the rest of the pics

I like the idea of wrapping with felt. All in all a very nice looking installation!

Visit site
Looks awesome! Am I the only one that actually puts a garage door opener in there??

re_guderian said:
Looks awesome! Am I the only one that actually puts a garage door opener in there??

re_guderian said:
Looks awesome! Am I the only one that actually puts a garage door opener in there??


I'd actually thought about using a momentary switch to drive a repurposed homelink module.

OregonLC said:
I'd actually thought about using a momentary switch to drive a repurposed homelink module.
Click to expand...

I'd be happy to find a console with the flip down sunglasses holder instead of that blank panel!!!

I know I've seen them somewhere in the photo archives here... perhaps it was the Lexus version? Or maybe from a later model Hundy? (Mines a 2001)....

Yep, our 2004 has the sunglass holder. But it's tiny. My Oaks don't fit. Nor do the more fashionable large glasses.

Indeed...better workmanship than I've seen in many aircraft I've repaired.

OregonLC said:
I believe Spresso may be working on a similar effort. I'm excited to see that as his attention to detail and craftsmanship is an entire level above mine. Dan: feel free to post here with what you come up with and put me to shame!
Click to expand...


Thanks for the compliment Dennis but you did a quicksilver job with this to which I certainly can't compete! Kudos! Thank you too for being lead dog on this project...making the first cut, even after measuring numerous times, can be nerve wracking!

Since I have a 1/2" RAM ball mount attached to my map light housing/trim piece, for my Kenwood HAM control head, I will need to verify if doing without the mount bolt, and relying solely on the 4-friction tab mounts, will still allow it to remain solidly mounted/vibration free.

Nope, LX has the homelink. Now I'm disappointed in the convenience.

spressomon said:
Since I have a 1/2" RAM ball mount attached to my map light housing/trim piece, for my Kenwood HAM control head, I will need to verify if doing without the mount bolt, and relying solely on the 4-friction tab mounts, will still allow it to remain solidly mounted/vibration free.
Click to expand...


Those four tabs keep it up pretty tight. Takes a good deal of force to free mine. Although a mount with leverage arm might be a different ballgame. Would be easy to pull the screw, drive around and find out.

TriArcher said:
Nope, LX has the homelink. Now I'm disappointed in the convenience.
Click to expand...

Dang. Cutting edge has its price.

Clean. really nice.
You must log in or register to reply here.

S
Engine not Switching Off