Has anyone tried to use a newer steering wheel from another toyota?

Anyone have the leather replaced? How much?

As I hear the cheapest/easiest fix is to just snip the stitching on the leather and remove it, there is a brand new never used regular steering wheel underneath.

there are a lot of other options for recovering from DIY kits of varying quality to sending it off, lots of threads in the archives.


you need to put the year of your rig in your sig,

if you have airbags: although there are some similar looking wheels no one has found one that completely matches.

if you don't have airbags swap possibilities are much easier.
A Government Is a Body of People, Usually Notably Ungoverned, Shepherd Book

That rifle on the wall of the labourer's cottage or working class flat is the symbol of democracy. It is our job to see that it stays there. George Orwell

There's also that guy who sanded and re-did his about a month ago. Looks great from the pics I saw.
"Complexity through joy."

"Who needs a home when you have a colostomy bag?"

if you have a 95+, you have to deal with removing the airbag as well...which can be a little nerve-wracking...


I have wheelskins on mine. Took care of the nasty worn look on my steering wheel. They're relatively inexpensive and took an hour to stitch on (which is what they estimated for the average install.

Another convert to the Church of Latter Day Swank, a sub-cult of Shahrislam
"...Opportunity doesn't knock, you have to kick the f***in door in and drag the bitch out screamin." -- Ullr
"I have more respect for people who change their views after acquiring new information than for those who cling to views they held thirty years ago. The world changes. Ideologues and zealots don't." - Michael Crichton
O

My FZJ80 is a 94', so no airbag. I will see if I can try out a few steering wheels from other toyotas in the wrecking yard. They probably want a ton o money still.
F

RavenTai said:
As I hear the cheapest/easiest fix is to just snip the stitching on the leather and remove it, there is a brand new never used regular steering wheel underneath.
Click to expand...

and if you aint the lead dog you're just dogcatch'n..
S

I know this is an old post but thought I'd put this in the thread for those searching. I just took my wheel into a auto upholstery shop
and had it recovered . $225.00 hope this helps anyone considering this option.
K

I went with a company in Texas that did an excellent job. Not cheap, but better than new. 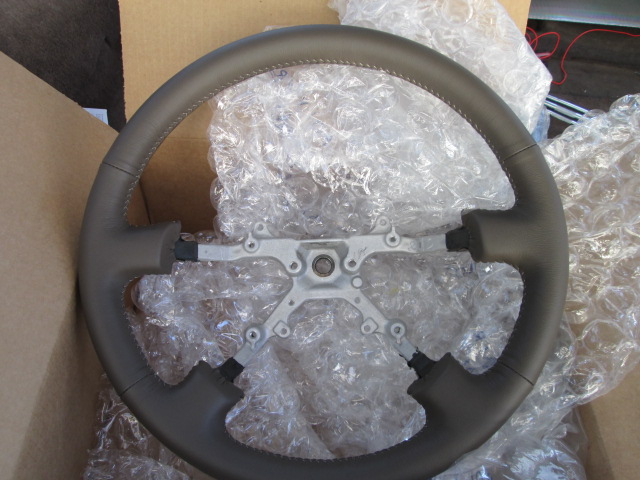 Just got my wheel back from Dallas Custom Steering Wheel in Texas. They're not connected to Craft Customs (also in Texas) and don't know if either does better/same quality work than the other. I went with full leather with a slight "grain" compared to the original leather (which is perfectly...

RavenTai said:
As I hear the cheapest/easiest fix is to just snip the stitching on the leather and remove it, there is a brand new never used regular steering wheel underneath.

I have a 94 that the steering wheel turns my hands black, can anyone confirm this I would love to cut the leather off.
Click to expand...

97-01 Camry wheel fits also. You will need a complete assembly with air bag as a donor . There is a guy on eBay that sells new left over leather steering wheels for $69.95 and I got the donor unit for the accessories for $50.00. All plug and play. It is about 1/2 inch smaller in diameter if that matters to anyone though.

I went with DCSW as well. 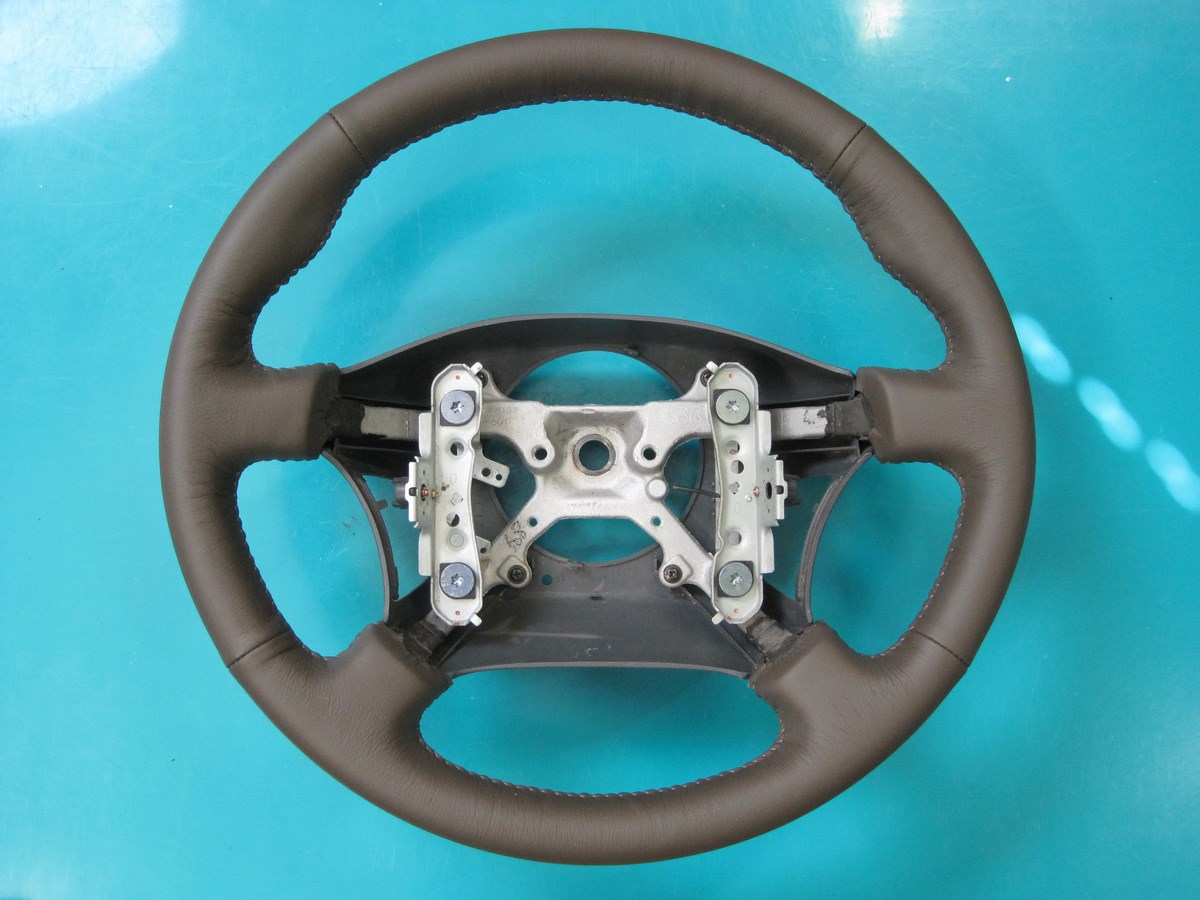 This was a purchase I debated over for quite some time. My newish to me LX450 is cosmetically flawless inside and out since I did the front row seats, but the steering wheel has pretty much sucked since the day I bought it. It was ripped and worn and became horribly sticky when the heat and...

Look up Loncky steering wheel covers. I have one on order but I’ve read they are pretty good and reasonably easy to install. Mine is currently delayed due to coronavirus.
Max

Brosky: there's a layer of dense black foam rubber under the leather that is glued to a metal core, not a new steering wheel i.e.: you won't find the hard vinyl wheel some other models/countries got. That foam rubber layer can come loose from the metal core of the steering wheel and IME it's better to pay extra to have the shop reglue the rubber to the core before they recover the wheel for long term stability.
1995 FZJ-80 Locked (US spec)
1996 FZJ-80 Locked (US spec)
1997 FZJ-80 (US spec)

Kernal Thank you, I was afraid to just start cutting. This answers my question. Mine actually still looks good but on hot days or on a scary obstacle if my hands start to sweat the old leather turns them black.
1994 FZJ K294 Built with more stuff then I can list here.
2006 Tundra Acc cab 4x4 DD with 115k
2017 F350 4x4 camper special diesel dually tow Reg
TLCA# 24523

Ok So last week I posted about recycling some seasoned leather (Has anyone re covered transmission shifter) and then I got tired of the cover I had on my steering wheel, but under the cover it was unsanitary to say the least. Not to mention the center rubber covering the airbag was no longer oak. 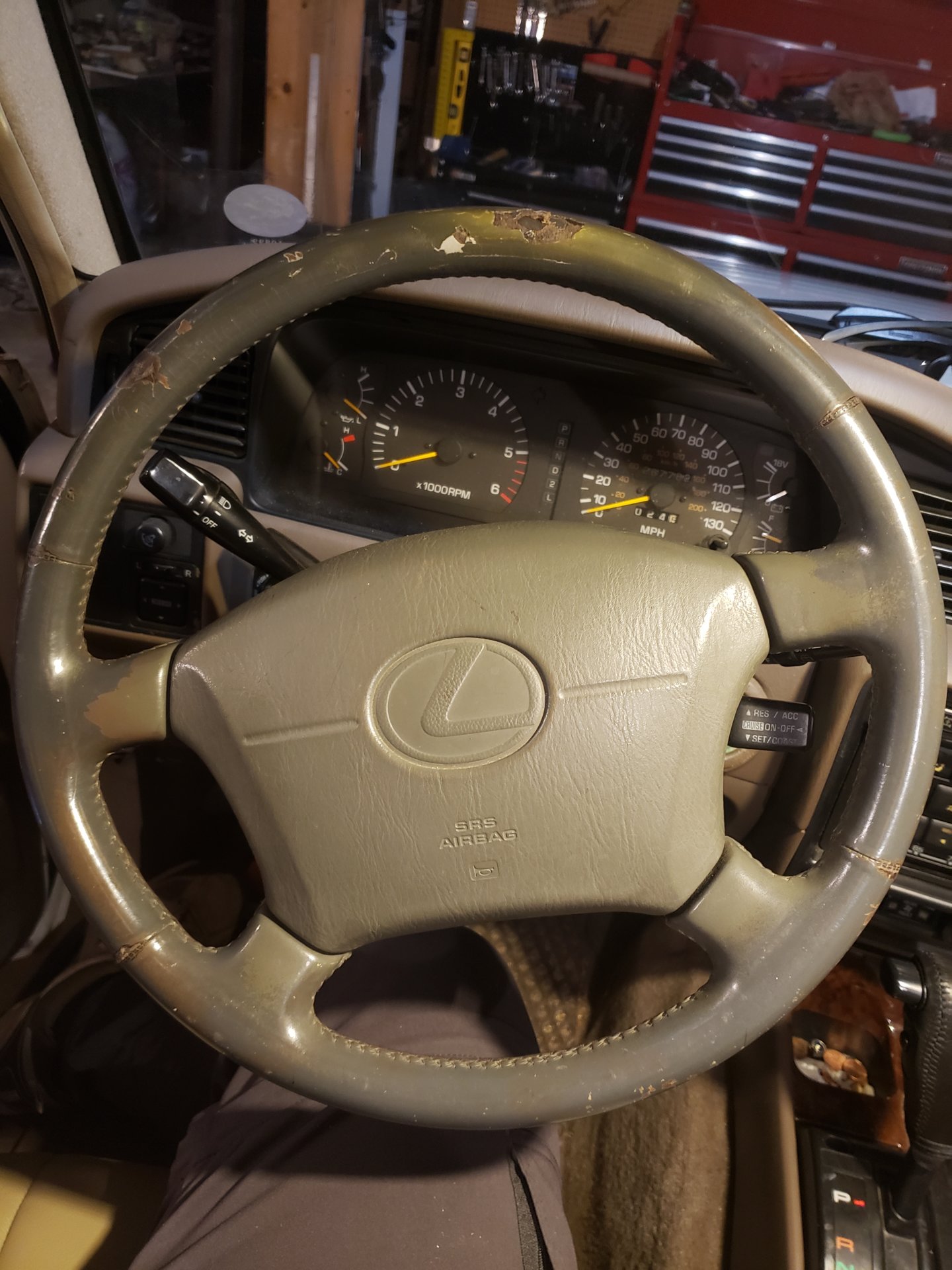 I initially found the lonkey (@Pippylongsausage) cover on amazon and 2 days later I had not only the wrong color but it has the leather torn near the pre-stitched areas. So I pulled the wheel and got at the stitches since I needed a pattern to work from. 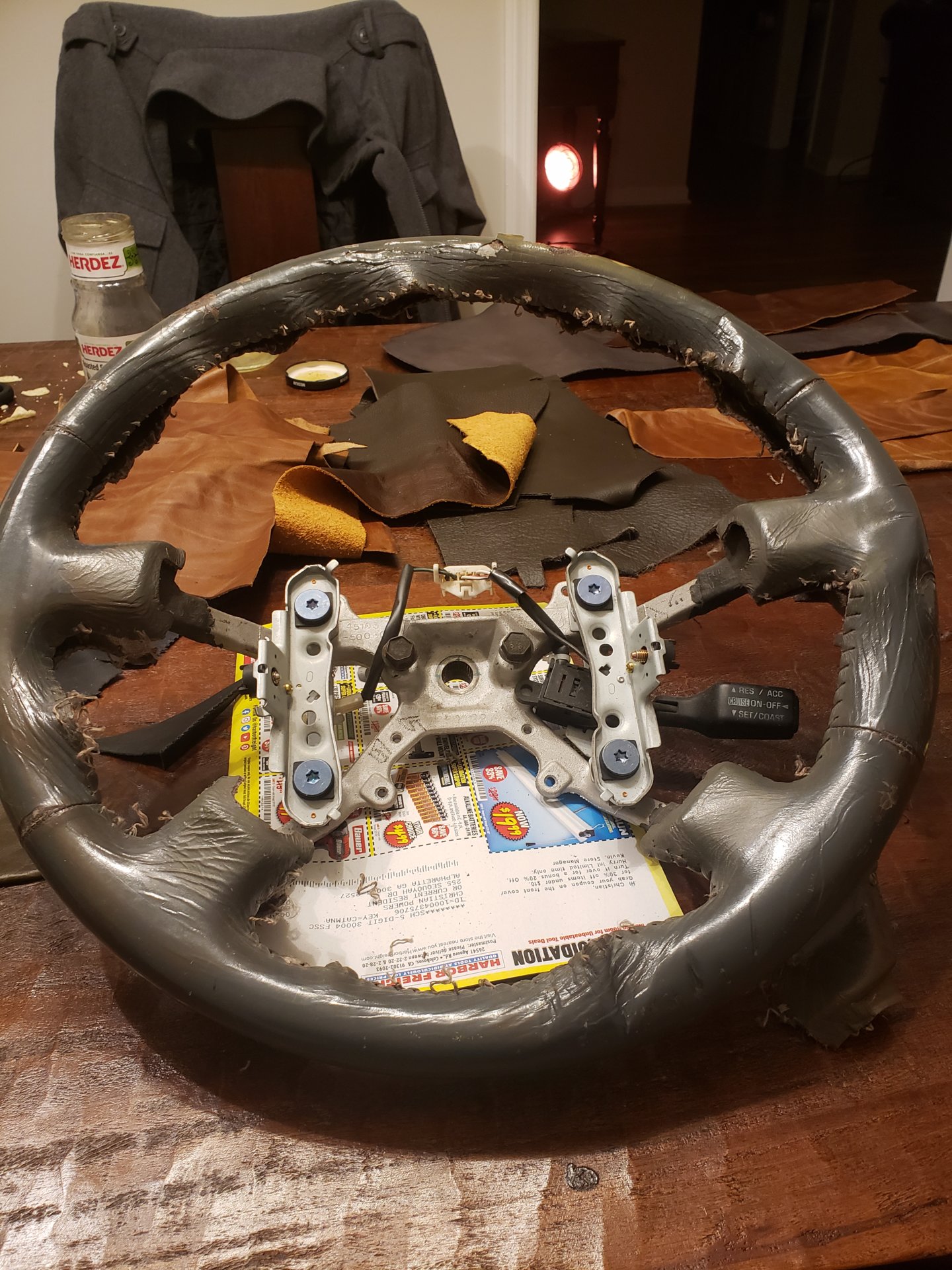 With a little salsa, chips and some leather scraps I got busy. 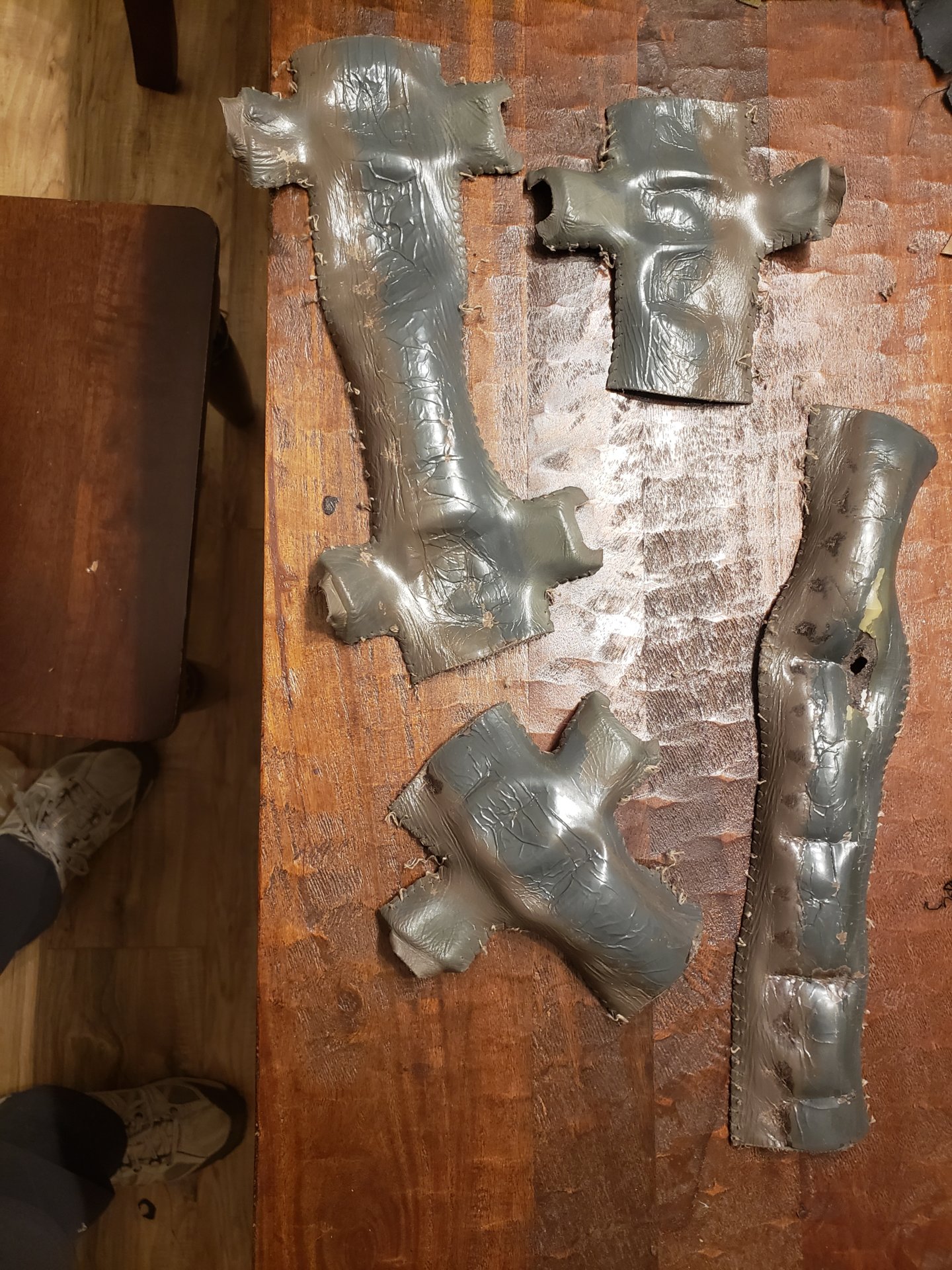 Turns out I didn't have big enough scraps that matched to do the whole wheel. I didn't mind making it out of patches, I mean really my second ever time working with leather, I figured it would just look better than nasty. 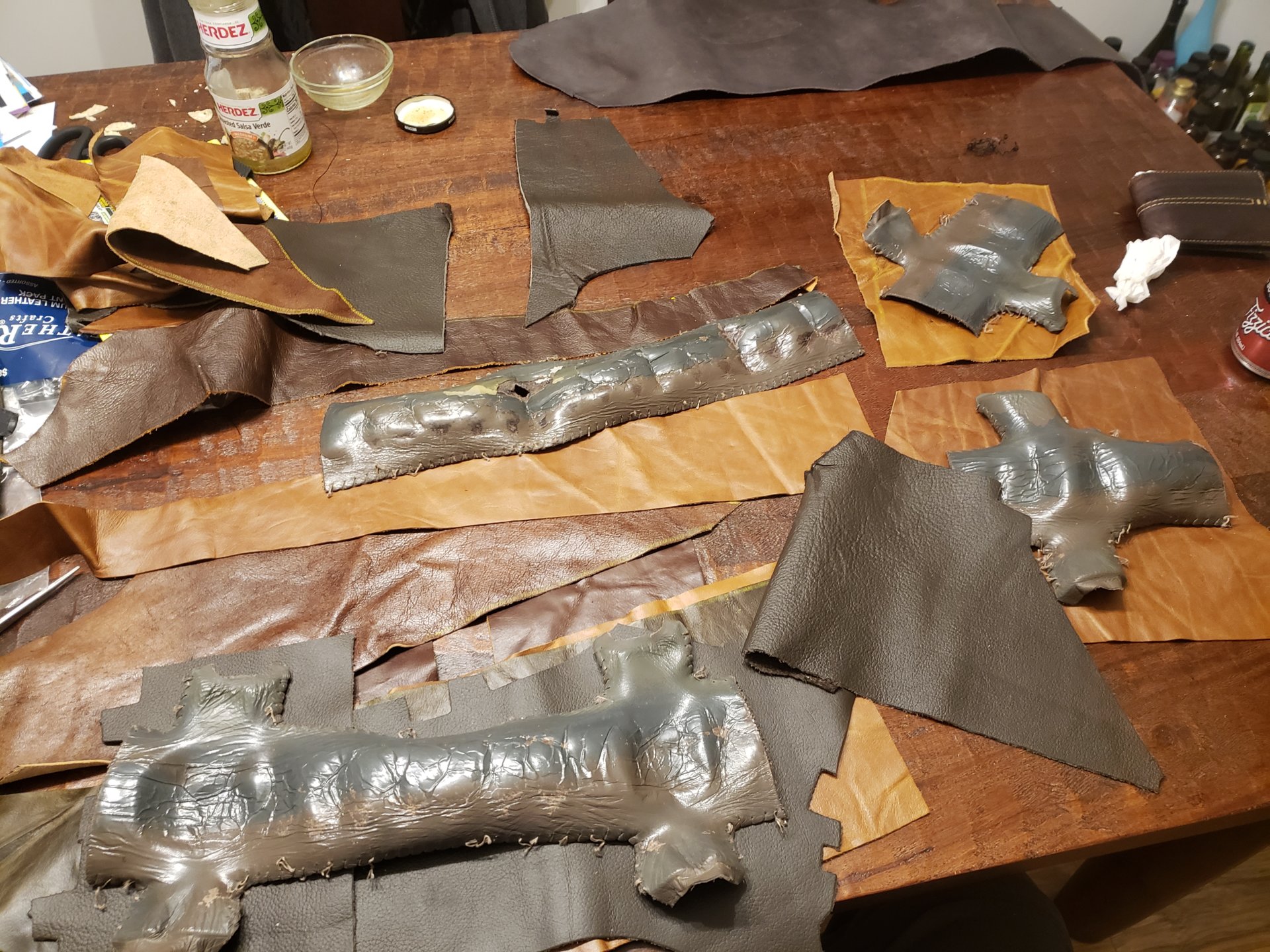 I happen to get talked in to going to hobby lobby for some more leather pieces and found a 3lb bag of leather remnants where the pieces were all fairly large and matching. After 40% off coupon i was $5.47USD poorer. So the pieces were put on paper and mashed down for tracing. the paper was laid flat on the new leather and all the edges marked and cut.
The ends the butt up against each other need to be shaved down and grooved a little (this is just my opinion since I know next to nothing about leather work) so I did a little practicing with the tools I have on hand. 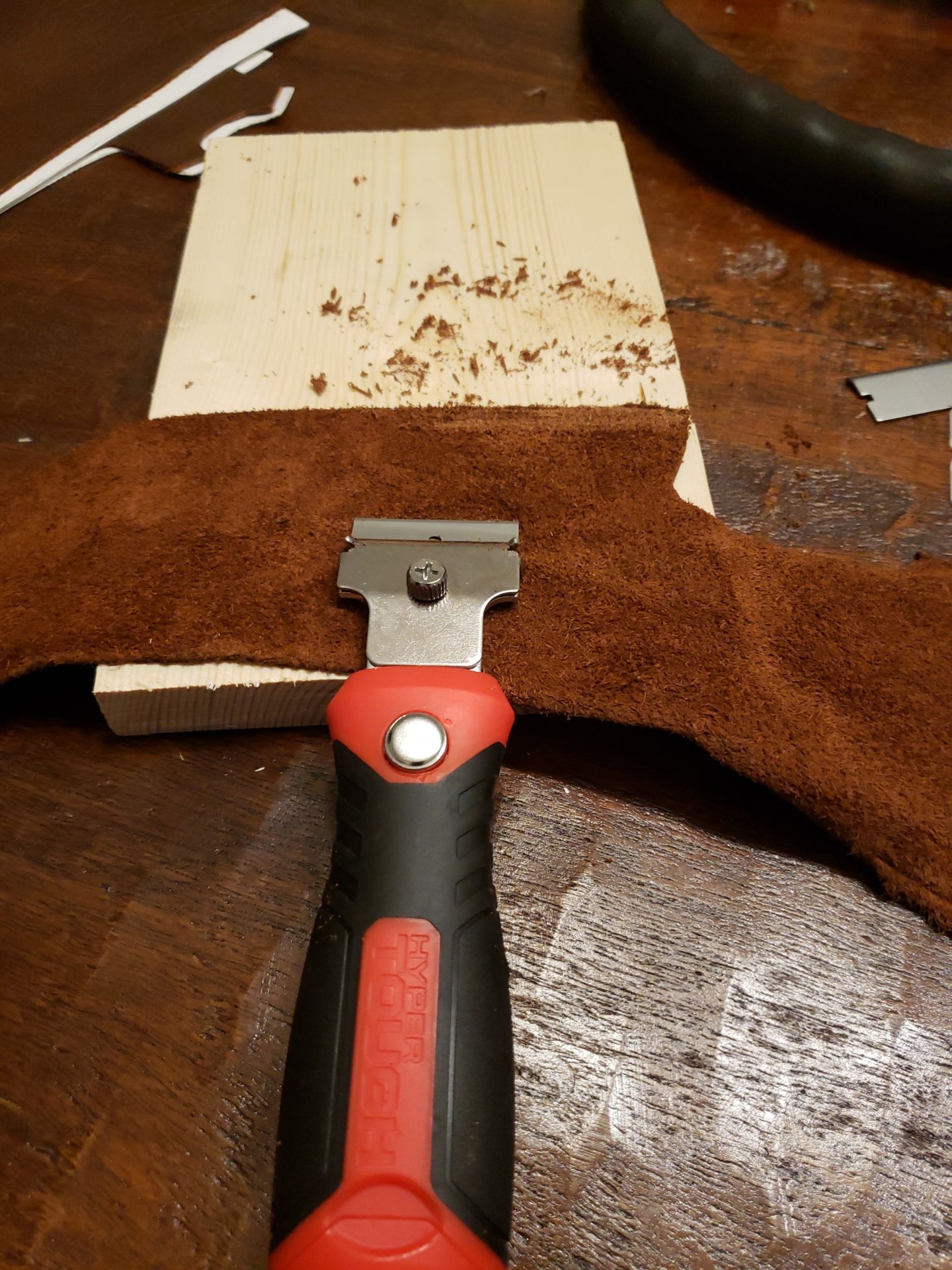 Do not pay a man to be a man for you.
You must log in or register to reply here.