Didn't really know whether to put this in the Diesel section or the 80 forum...I'll give it a go here. It's going to be a long-term thread documenting this build. I thought it might be interesting since the 12H-T was never offered originally in the 80 series...so there's probably going to be a few interesting kinks to work out along the way.

The 12H-T was the engine I really wanted...I felt that it had the right combination of simplicity, power, efficiency, and robustness that to me embody the idea of a Land Cruiser. When this donor vehicle presented itself, I couldn't say no.

I will post pics of my FJ80 later...it's in stock form with tiny little 29" tires that already seem to be too much for the lowly 3FE to turn, even when guzzling back all that gasoline in the effort. Needless to say, I can't wait for the day I tear that gas pot out of my truck. Special thanks to Driley for taking time out and checking this truck out for me in his hometown and giving me an excellent report about it. Also thanks to all those who generously offered.

Here's a pic of the 1991 FJ80 that will be the transplant recipient: 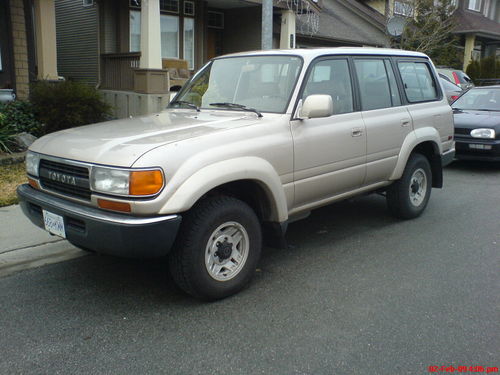 The 12H-T came to me by way of a rusty Canadian HJ60 that someone had dropped this poor engine into. 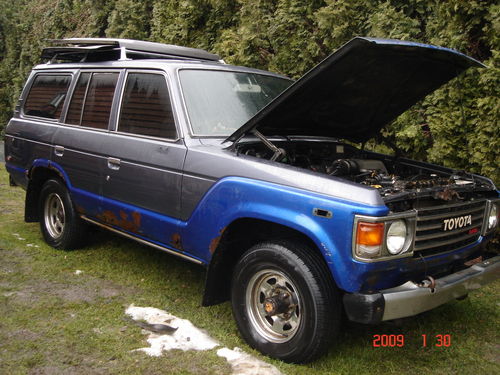 The original transplant into this rust bucket ran, but the quality of the transplant was somewhat lacking...there were wires routed in the most ridiculous manner, and it looked like some construction material served as custom bracketry in the engine bay. 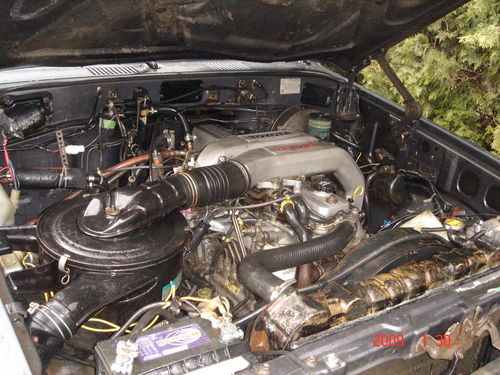 Starting to take the rusty stuff off... 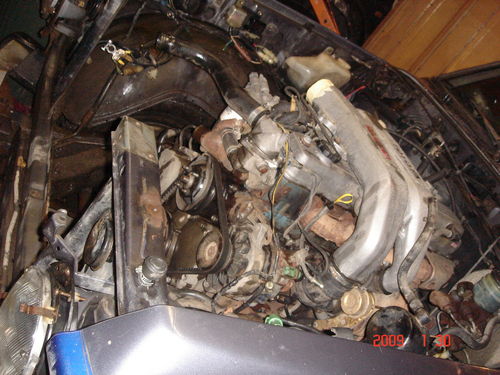 Most of the front bib gone...it was very entertaining finding all sorts of different sized bolts and nuts jumbled together in this truck. For example, the right engine mount had the usual 17mm nut, but the left engine mount was secured with a "custom" 19mm nut. 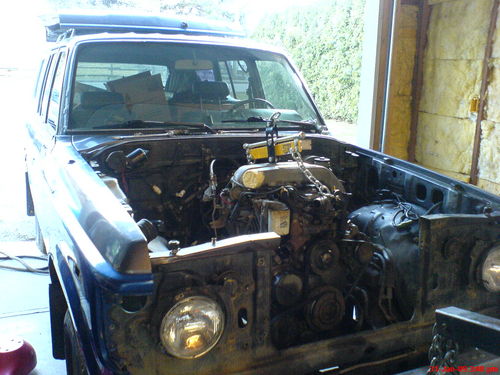 My good friend, Sheldon, putting the engine hoist into position... 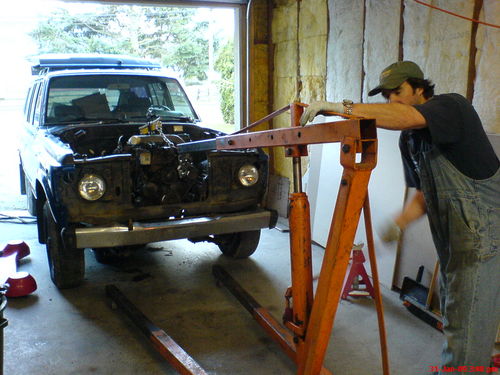 The most beautiful word to ever grace the top of a Toyota diesel engine..."TURBO". 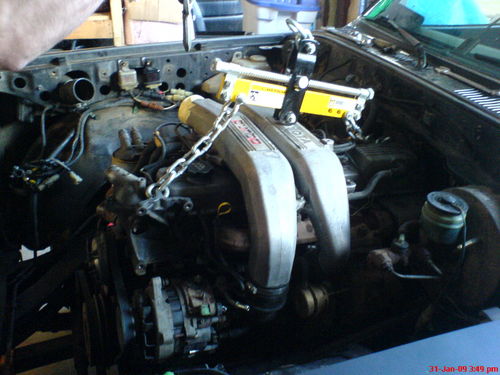 This photo is me leaving Sheldon in a precarious position just to take an "action" photo... 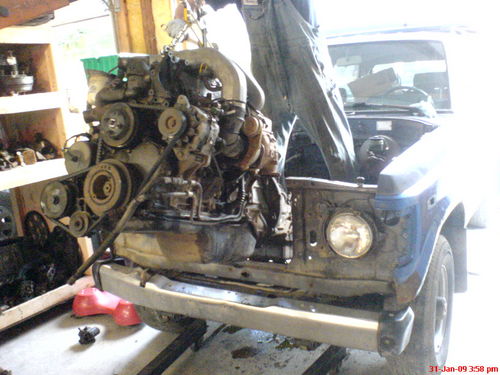 A sweet 12H-T liberated from its rusty tomb... 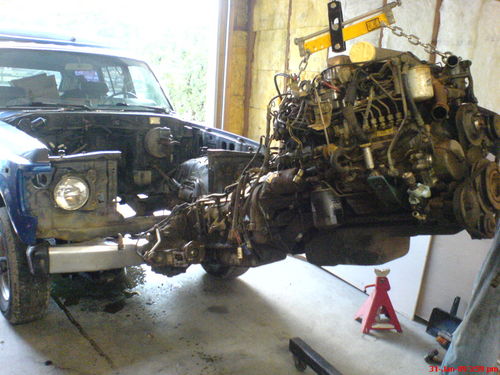 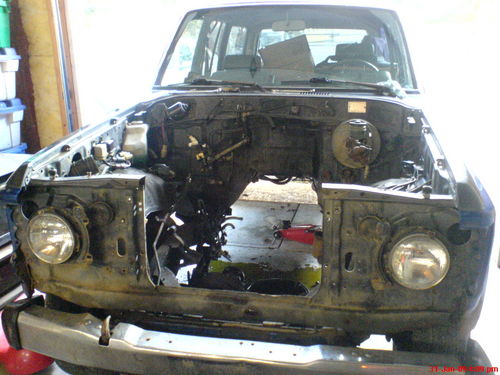 The beast ready for prep work in preparation for the transplant into the FJ80. That's Sheldon's 24V 1HD-FT in the background...but I'm sure nobody's interested in that thing. Drool! 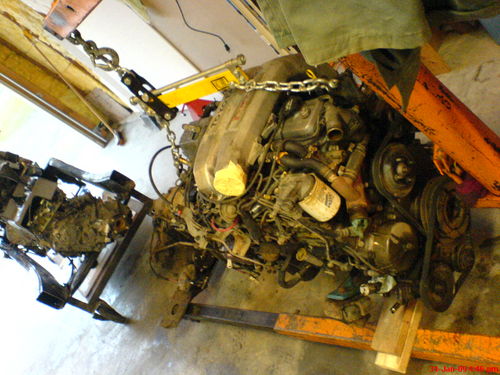 More to come as the build progesses!

Looking forward to seeing your updates.

Considering the (relative) affordability and availability of Toyota diesels here, we're pretty lucky. I am trying to decide what is going to go into my own 80..... if your swap goes well that will narrow it down considerably. WAY cheaper than a 1HD-T!
"Socialism never took root in America because the poor see themselves not as an exploited proletariat, but as temporarily embarrassed millionaires." — John Steinbeck

"You are so wrong that I'm not even going to discuss this with you." - Atticus

Is Don on the phone? Where are those pictures I was supposed to see?

That is super cool Stone. Before I bought my HDJ81 I was seriously considering the same project, with Sheldon's (G & S Cruiser Parts for those who don't know) parts help and advice of course.

The engines never really materialized for me though.

Any diesel conversion in any 80 is interesting. Post on dude!!!
Currently Project-less but thinking about a quad cab FJ60 pickup...

Stone said:
The 12H-T was the engine I really wanted...
Click to expand...


Stone, glad to read that you're back with a Cruiser. What are your plans regarding trans and transfer case?

way cool project stone. nice to see another diesel converted 80 being done up here...i wish i could be a member of that club! cant wait to see more progress pics...
sonny
old ride: 1998 4Runner

wussyPup said:
Stone, glad to read that you're back with a Cruiser. What are your plans regarding trans and transfer case?

Sheldon and I were discussing this, and I really would like to keep the full-time AWD/4WD system that's in my FJ80 right now if I can. The 12H-T is currently bolted up to an A440 and a part-time case. We'll have a better idea when we pull out the 3FE/tranny combo from the 80 and compare the two drivetrains side-by-side. Hoping that there isn't too many complications inside in terms of compatibility...thinking about the torque converter, and hoping a 12H-T compatible torque converter will just fit into my 3FE A440.

If it really gets complicated or expensive to keep my full-time case, I guess we'll retrofit the part time one and deal with the vacuum shift issue.

I was so excited last night I couldn't fall asleep until 0130 in the morning. Was a bit hard to get up early to go to work today...everyone seemed to have survived though...
Stone's Land Cruiser & Flyfishing Pics

d0ubledown said:
way cool project stone. nice to see another diesel converted 80 being done up here...i wish i could be a member of that club! cant wait to see more progress pics...
Click to expand...


Thanks, Sonny...G&S have a couple of 1HD-T's available, I think...would fit nicely into your 80.
Stone's Land Cruiser & Flyfishing Pics

Good to see that you're back in the cruiser saddle again!

Good luck with the conversion!!

Wishin' on a dream....
"Whyte Stallyn"
1991 FJ80-work in progress many aspirations(currently bending and welding accessories)
Just me, my Toy and my fishin' pole​

You just got passed by a tractor.

Great project Stone .. glad so see you here and back !

are ypu planning a complete rebuild to the 12H-T ?

Planning to add a intercooler and few more PSI .. ?
HJ-60 2H-TI Tencha
VDJ76L-RKMNYV - Cleopatra
Cruisers on my mind, blood and soul !
Join us at our local Panamá Off Road Forum
if you are achieveing the max boost then it isn't the boost that is going to kill your engine... it is your right foot.

Thanks guys...Gifu...I really miss that BJ74. If you have time, I wouldn't mind some pics for old time's sakes in my email...

I'm a huge fan of this engine. I expect amazing results from this build.

Not much of an update for this week...

Just degreased and sprayed down the engine some more. Also removed the Alternator and Starter so that they can be converted over to 12V. The AC compressor clutch will need to be converted to 12V also.