Leaking power steering pump- can I leave it empty?

I'm on my second FJ60, have had it about 6 months and have enjoyed restoring it every bit as much as my first one.

My first one left me stranded on the highway literally 45 minutes after I bought it with a seized smog air pump, and with little choice in the matter I had it towed and had the smog air pump replaced with a remanufactured unit. My first hour of FJ60 ownership came with a tow truck and a hefty bill, and I want to avoid that this time around.

I know my current FJ's PS reservoir leaks, I'm wondering if there's any harm in leaving the reservoir empty and dealing with the increased load in the steering wheel when parking. There are a host of things I need to do/buy before I get around to fixing it properly, I'm just wondering if I'm safe to run a dry PS reservoir in the meantime. I wince at the thought of refilling it and potentially seizing the smog air pump again.

It sounds like your going to need to replace or rebuild your powersteering pump at some point in the not so distant future. Running it dry will only make the pump die faster. If it is leaking really bad, I'd bump it up on your priority list.

I had my steering pump blow out a seal somehow and it spewed fluid all over the place. Eventually after unsuccessfully rebuilding it myself, having a shop rebuild it twice, and trying a different rebuilt pump with no success, the shop found a new Toyota pump and solved my steering nightmare.... (IH8steering pumps...) Good news is that even after all of that work last summer, the smog pump is still working (or at least not seized lol), although I suspect that it isn't long for this world now.

I wouldnt run it dry it will/can sieze and throw the belts and cause big dramas. Not a good idea

This is not good advice, just a measure of tolerance. I ran a leaking power steering pump for five months in hard conditions. I gave up filling it after a while and got used to the lumpy steering. We were on expedition and I had a used pump in the back but something else always broke and demanded what minimal spanner time I had in the day. Eventually I swapped the pumps - felt like over-indulgent luxury having smooth assisted steering after that. I haven't opened the old pump yet so I can't say what ,if any ,damage it sustained.

After seeing the condition of most vehicles and the driving skills through Asia the word 'safety' takes on a new meaning probably replaced with 'faith' . As I said - it's not good advice but all occupants still alive!

You could remove the belt, that way you avoid burning up your pump. Parking lots are gonna suck.

Random Dan said:
You could remove the belt, that way you avoid burning up your pump. Parking lots are gonna suck.
Click to expand...

Yeah this would work. The alternator is also on the circuit but luckily it is the tension-er. So go to the parts house and find something that'll work. @Tighe

The leaking PS pump is most likely what caused the smog pump to fail. Not good leaking ATF onto the smog pump. If you do some searching, most people (me included) will say that rebuilt pumps suck. Mine lasted maybe a year. This is due to a non-replaceable front bushing that wears out. Here's what I eventually did and was very pleased with the results.

I ditched the smog pump. I didn't need it. I installed a Saginaw PS pump. I think these are superior to Toyota pumps. They provide more boost and make running larger tires easier on the arms, especially off the pavement. Plus they are cheap and available from any parts store. I used a mount that uses two of the head bolts to hold it on. I was able to move the pump forward so it was using the next further forward pulley on the water pump / crank. The nice thing with that is now there are two belts running the water pump. If one belt breaks, you lose either the alternator or power steering, but not the water pump and thus are not stranded.

That's what worked for me.

To answer the original question yes you will be fine as long as you take the belt off.

Running the PS dry will trash the pump. Fix it. It's possible a seal sweller or stop leak might fix it temporarily.

Thanks so much for all the info! This is exactly what I was hoping to learn- keeping the PS pump wet while losing the smog pump seems to be the recommendation so that's what I'll work toward...looks like I'll have to shuffle my priorities around a bit.

I'll start with devaning the pump (budget build 2.0) so at least I won't end up stranded. Something tells me that when I take off that air pump it'll mark the start of a desmog. I've read through the many threads and the Word document a number of times so far- it's quite a bit to take in!

Thanks again for the responses, without this site I never would have had the confidence to buy another 60.

Pulled the smog air pump and opened it up last night. Seemed to be in good working condition but I gutted it and clamped the ends of the pipes coming off of it. Not airtight, as everything I read suggested that was not needed, but rather in an effort to reduce debris buildup. I will drill a hole through the bottom as well before reinstalling.

One question- now that the ends of the two large pipes coming off the back of the pump are clamped, what happens at the other ends of where the two corresponding hoses lead?

For future reference I took a few photos.

In this photo the pump is almost gutted. You can see there is still some carbon smog stick material in the grooves which still needs to be removed. 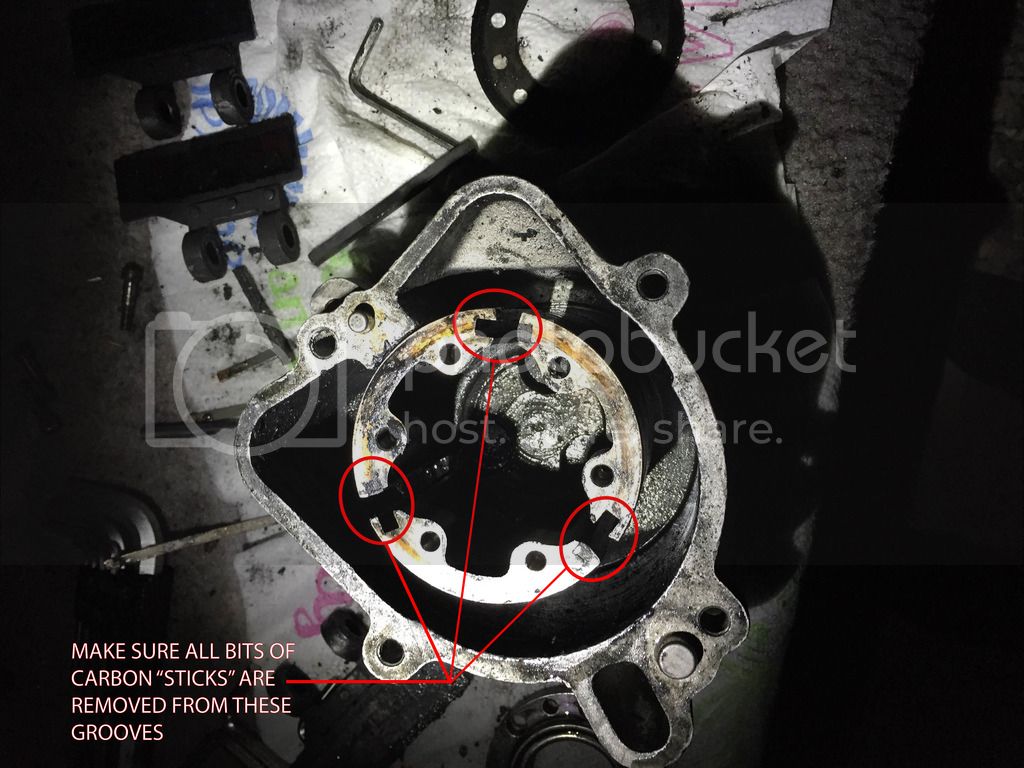 These are the three fins/vanes that get removed. If anybody wants these they seem to be in good shape. Let me know. 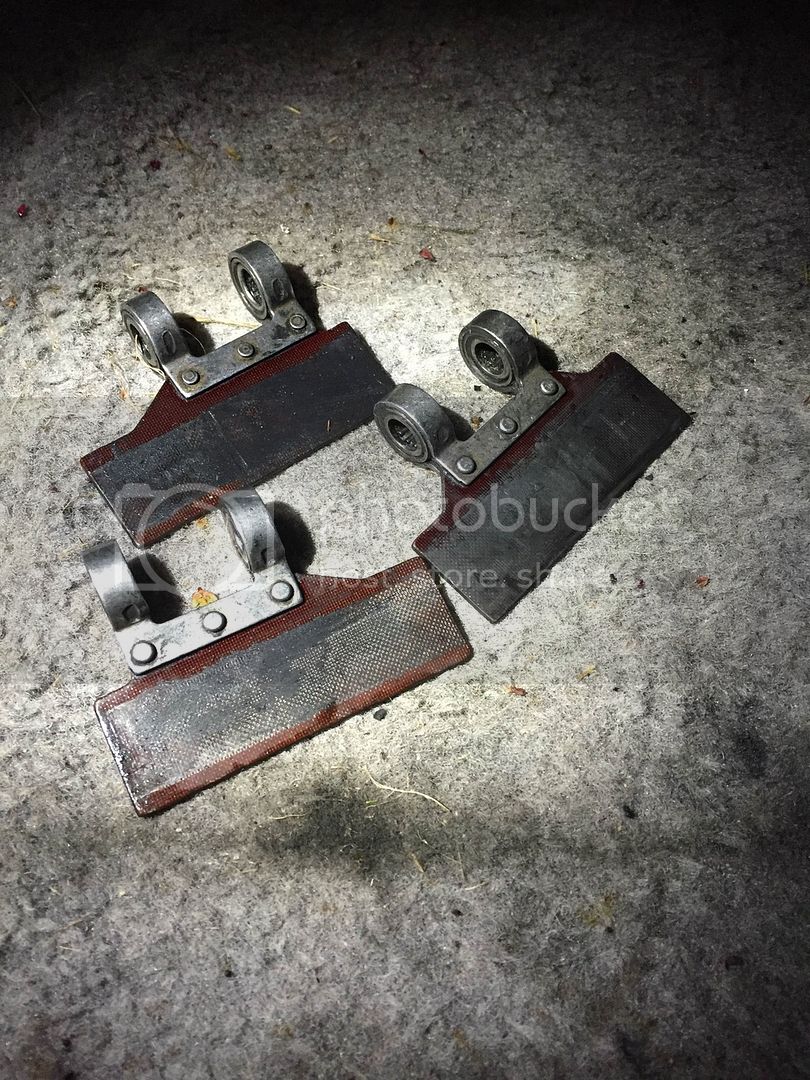 The two pipes coming off the back of the pump, bent shut. What happens at the other end, where these connected to the rest of the air system? 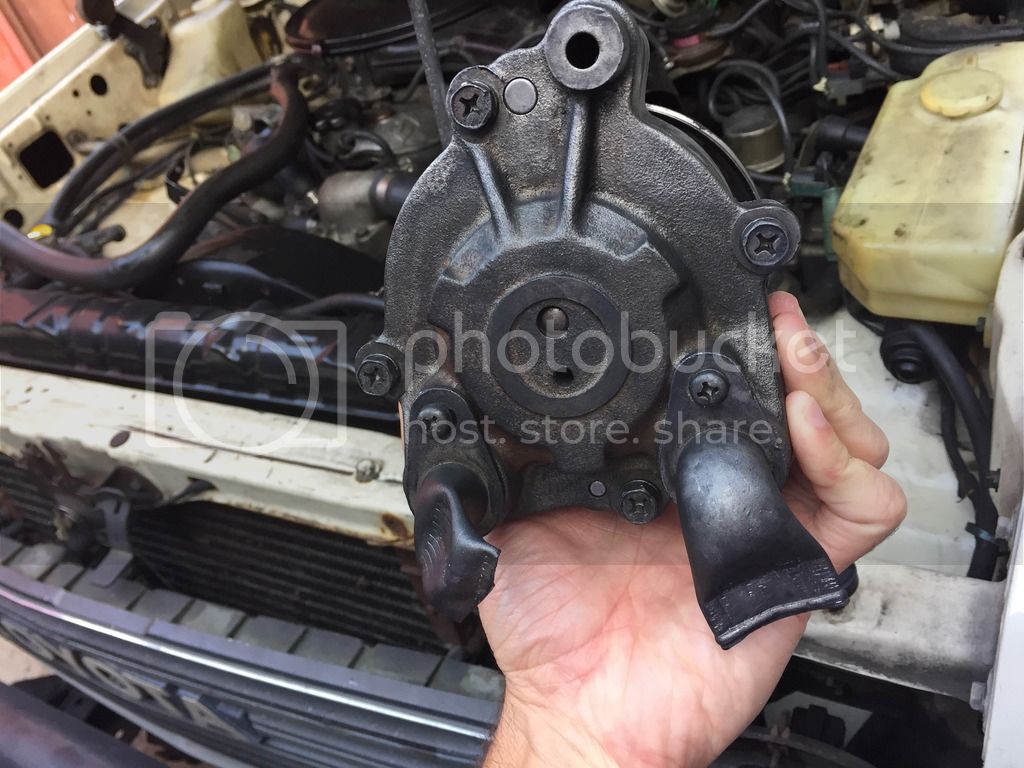 And finally, the bearing that needs to be regreased is comprised of small steel rollers which sit between the two steel rings surrounded by hex head screws, at the center of the photo below. 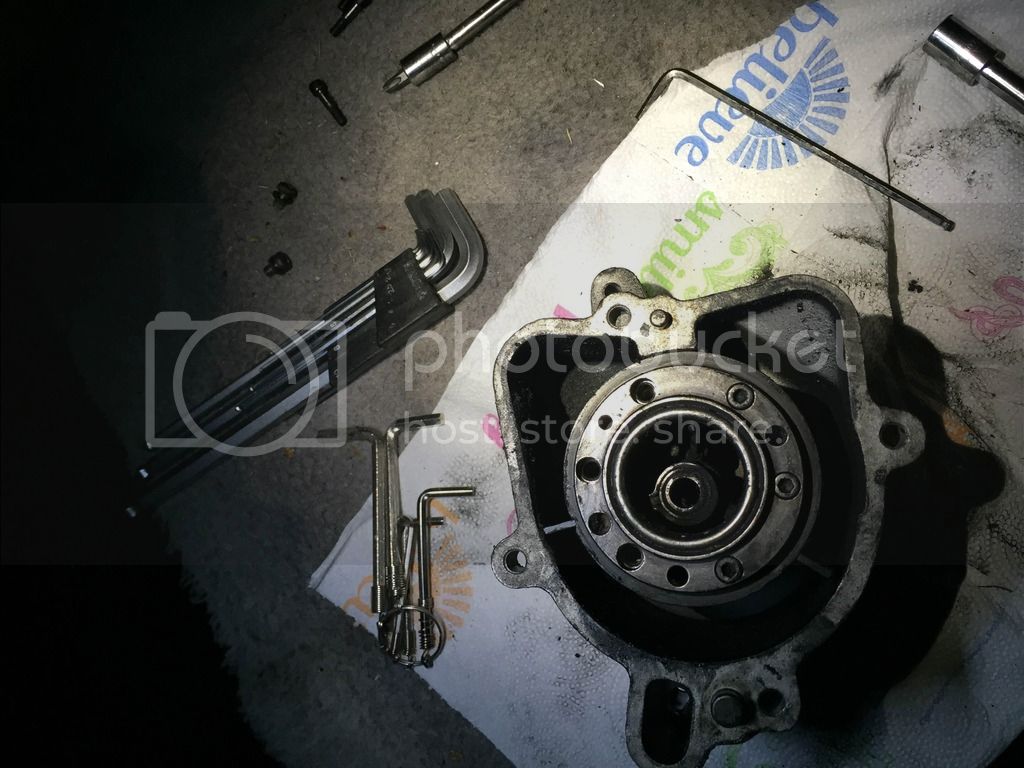 Yes, I could use the carbons if you're going to throw them, otherwise. (no cracks?) $10 shipped?

If you want to put nice caps on the air cleaner where the smog hose went,
Send a PM to:
fj40jim
He sells them. Nice fit.

Thanks for the cap info I'll get hold of Jim. In the meantime I'll probably just put the hoses back on and block off the open end of each hose.

Spike Strip- I believe there are no cracks. I'll send them your way, pm me your address.

After reinstalling the pump and capping the now exposed air outlet/inlet, I re-tensioned everything and fired her up. There's a definitive screech from one of the two belts now (or maybe from both!). Before I go back and re-tension them again (I loosened the alternator when I was removing the smog pump to make more working room) I wanted to inquire about how to find the proper tension on the two belts. Is there a shade tree method? I highly doubt they're too loose- if anything I tightened them beyond where they were before I started this. I would describe the two belts as stiff to the touch now. There was no screech before I started this.

The screech is not very loud, more like a whine, and naturally it increases when I throttle up. Definitely audible from outside the truck with the hood down, and also from within the cabin. I have not taken it on the highway, just around the block.

The smog pump is now very easy to move by hand and turns smoothly. The PS pulley turns but definitely has more resistance- but I didn't make any changes to the PS pump/pulley so from a logical point of view it doesn't seem like that would suddenly be the cause of the whine/screech.

The other thing I noticed when reinstalling everything was that the smog pump belt comes extremely close to the head of the smog pump's long 'pivot' bolt. Perhaps I put this pivot bolt in backwards and it's contacting the belt. Seems a little dangerous to reach my hand down that far by the fan and belts when the engine's on to see if I can feel any contact.

There is a "by feel" method for tightening the belts without a Burroughs gauge (which really ain't all that accurate to use).

Push down on the middle of a belt with your finger, applying "firm" pressure, but not excessive. The belt should deflect about a half an inch or so on the big belts. The AC belt dhould deflect farther since its longer and thinner.

Basically you want the belts as loose as possible, so long as they won't slip or jump the pulley.

Take a look at the belt when the engine is running. It shouldn't be jumping up and down in the center excessively.

Once even a new belt gets contaminated with coolant (especially coolant) or oil, it seems like it will squeal forever.

If you remove the old belts and clean the pulleys real good, and replace the belts with new ones... They'll be quiet. Guaranteed.

Awesome, thanks for the info! The only thing that may have gotten on the pulleys is Simple Green. I cleaned the smog pump pulley with it and the alt pulley may have received some overspray. Thanks for the help!
You must log in or register to reply here.
Share:
Facebook Twitter Reddit Pinterest Tumblr WhatsApp Email Link
Top Bottom