Ok, so I've had my '93 80 for a few weeks now. Done lots of little fixes to it, but didn't dig into anything electrical from what I can remember (other than removing wires not connected at either end).

Tonight I finished up, and was going to drive my 80 to work tomorrow, and hopefully pass my safety inspection on Friday morning....

While cleaning up, I closed the tailgate - which has been open for about a week while I used it as a parts shelf/tool bench. Somehow this triggered the power locks, and the lights flashed.

Then I opened the drivers door and an alarm chirped at me, and the lights flashed again. Put the key in the ignition, chirped again and lights flashed. There is a red LED on the dash that is blinking, that has not blinked before while I have had the truck. I turned the key to start the truck, and I get nothing. (Yes it's in park)

Now, I have driven this truck over 2000 miles (in 3 days) and it never did this. I contacted the P.O. and he said that he didn't even know it had an alarm in it. I have no key fobs for an alarm. The ignition is locked out.

I can see where the siren is under the hood, but I have no idea where any brain might be, nor do I know what would happen if I just un-plug a brain.... I really need to get this running tomorrow!!

Any ideas or bypasses would be appreciated!!

Check out my thread on changing out the alarm.

I talk about actually removing it - which is really nothing more than removing part of the harness under the steering wheel. You don't even have to bother with the rest if you don't want to. Once you've done that, it should pretty much kill the system.

Now the alarm goes off solid as soon as I connect the battery negative. Disconnected it to see if I could re-set it, but I guess that was a dumb idea.... I know alarms go off when you connect them!

Worst part is, I can't open my door all the way because the truck is parked in my hoist, and now I can't get it out of park even to roll it back so I can open the door all the way!!

As Cruise stated unplug the black box (mine is above the left kicker panel, left of steering column). It has one large white plug in it or you could disconnect the battery and flip the toggle switch to the front on the lower left kick panel (if yours has one). This puts it in Valet mode, then reconnect battery. The alarm is actually sounded through the horns, btw.

Is there a tiny switch somewhere that you might have flipped accidentally? I won't tell you where to look, but mine had one. I never had a remote keyfob, but I pulled all that alarm stuff out while I was working on the engine, etc. I don't know if the switch was bypass, or valet mode, or what. I don't think my alarm was port installed Toyoter stuff though. Mine was not an RS-3000.

these units were port or dealer installed (not an OEM option in '93), depending on where the truck came into the US

If you have a separate siren under the hood then the alarm is most likely after market. And since most aftermarket alarms are installed by people who are in a hurry I'd bet you'll see it under the drivers side of the dash.Look for a black plastic box about 4"x4"x1". If you find one unplug it. You may also need to track down the starter kill circuit. Look for 2 larger gauge wires interrupting a Black/White wire in your ignition harness. Reconnect the black/white and your good to go.

to disarm the alarm without a remote you find the valet switch it will be a small momentary button with a grey and black wire with a blue plug at the alarm box. hook up the battery (the alarm will be going off) turn key to "run" position press the button once. and the alarm should disarm, if the default settings were not changed. if it has the old style clifford valet switch with two buttons, I believe the sequence is the same except for one tap with the key on it will be star-blank-star after the key is in run. if you see the switch you will see what I mean. 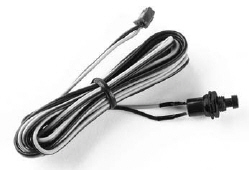 Thanks everyone, I'll dig into this tonight when I get home. I did a quick search for the valet switch but didn't come up with one...

Well folks, as quite often the case, I may have A) answered my problem in my first posting and B) proven myself an idiot again.

Went out in the shop for a quick check this morning before I headed off to work. Yes, the " wires not connected to anything at either end" have a few relays... and a little plug, which I assume plugs into the little plug that looks the same in the engine bay.

Hopefully I can just plug it in and go back to normal!

haha BTW the valet switch on mine is near the bottom of the dash near the center console, kinda hard to see from the seat.

Ok, so not proving myself to be an idiot... I re-attached the wire bundle and no dice.

Dug into the drivers side kick panel, wrangled the brain out and pulled all the harnesses out. Success! Found the valet switch as well.

Now that it runs again, I can see if I can find a remote for it!

Thanks for all the tips and assistance!

Glad it worked out for you. Sure would suck having the truck stuck in your lift spot

MrMoMo said:
Ok, so not proving myself to be an idiot... I re-attached the wire bundle and no dice.

Dug into the drivers side kick panel, wrangled the brain out and pulled all the harnesses out. Success! Found the valet switch as well.

Now that it runs again, I can see if I can find a remote for it!

Thanks for all the tips and assistance!
Click to expand...


the Viper remotes are somewhat backwards compatible, but only somewhat - not all models listed on the interwebs as working actually do so - I had to send two back before I found the correct one

you need the Viper model number off your Viper box, and the FCC number
You must log in or register to reply here.

B
Rebuilt OEM Starter, tries to engage but engine will not turn over - loud noise only