Who has these fitted to their truck?
Just curious on fitment as I've just received mine and they don't seem quite right.

I bought them and yet to use them, I believe they are a straightforward install.

Just trying to figure out where these go.
Says they go at position 1 on the chassis but I'm unsure. 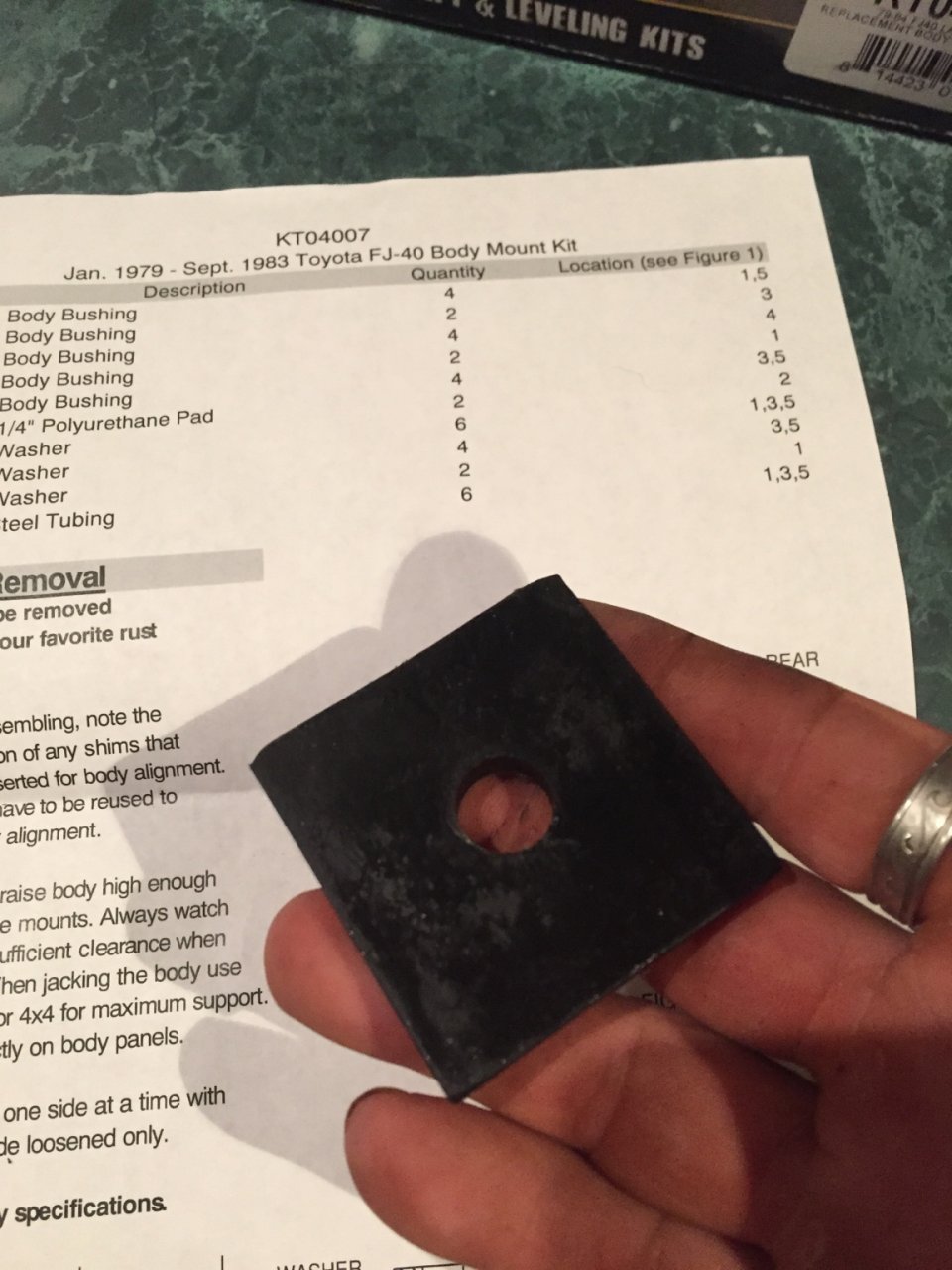 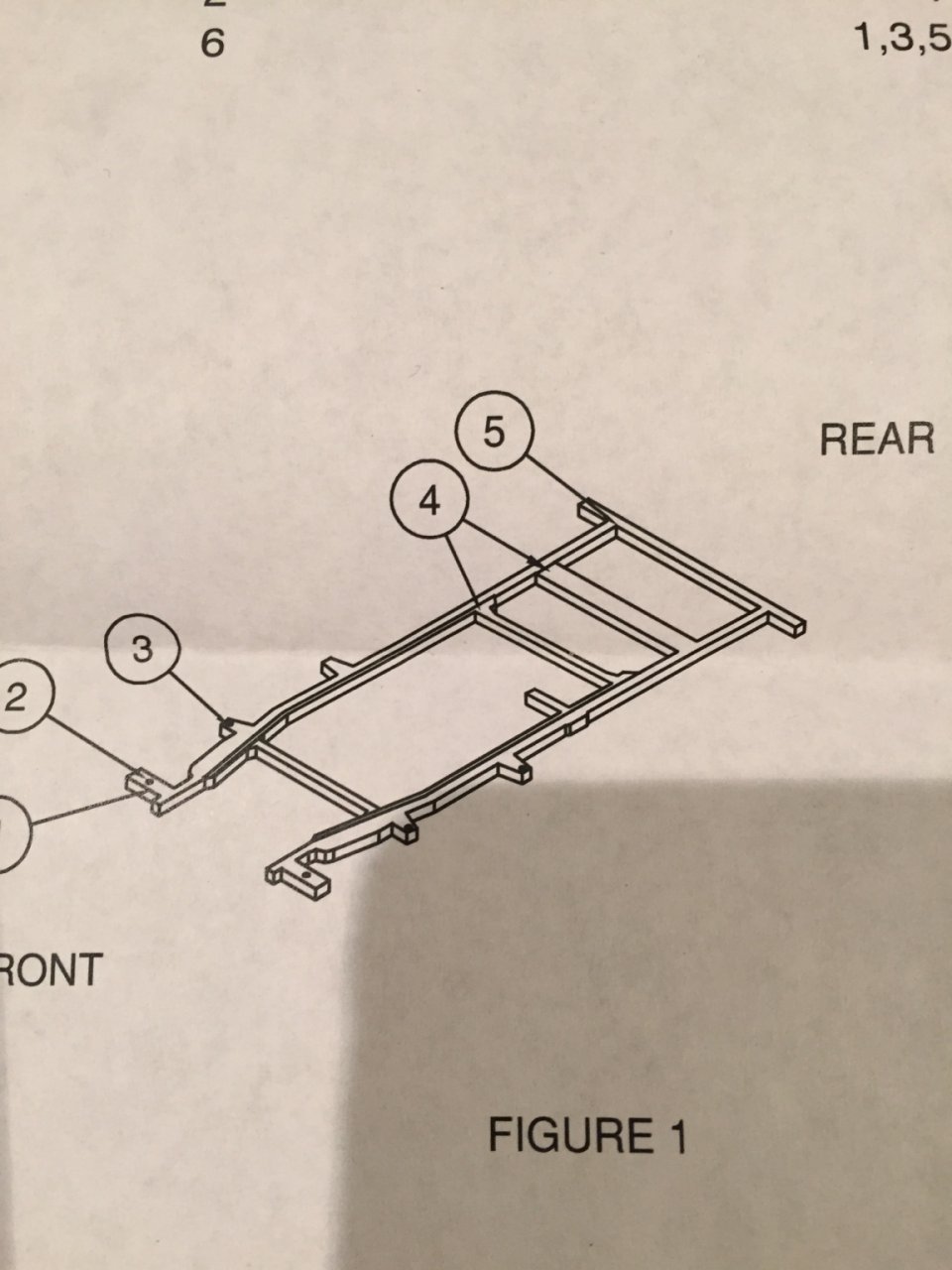 The chassis picture is o lay an infographic and not indicative of where the mounts actually fit on the chassis.

The squares are at position 2 on the daystar drawing and position 6 on the Toyota diagram. They go under the running boards. 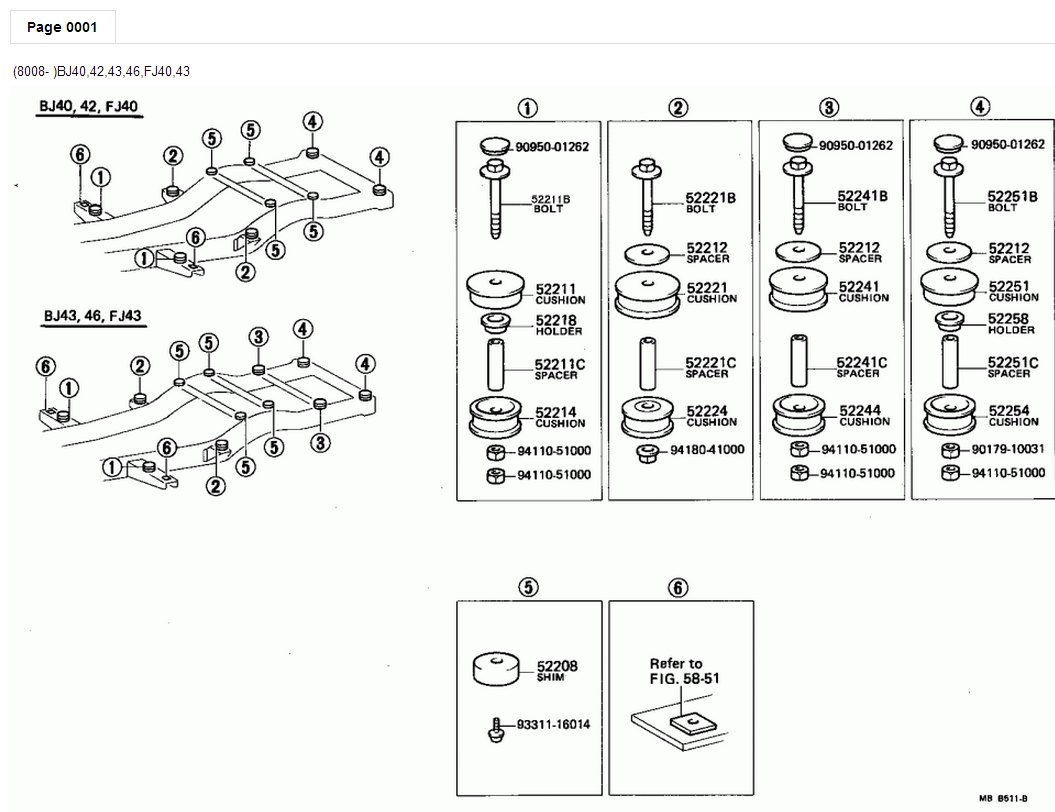 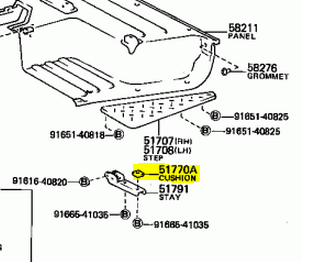 Am I going to have to use some parts from my old bushings? I'm honestly at a loss as to how these are supposed to fit.

This is position one and it's associated bush.
The bush is sloppy in it's opening, the crush tube doesn't appear long enough and the associated lower bush's recess is smaller than the metal that protrudes through the hole. 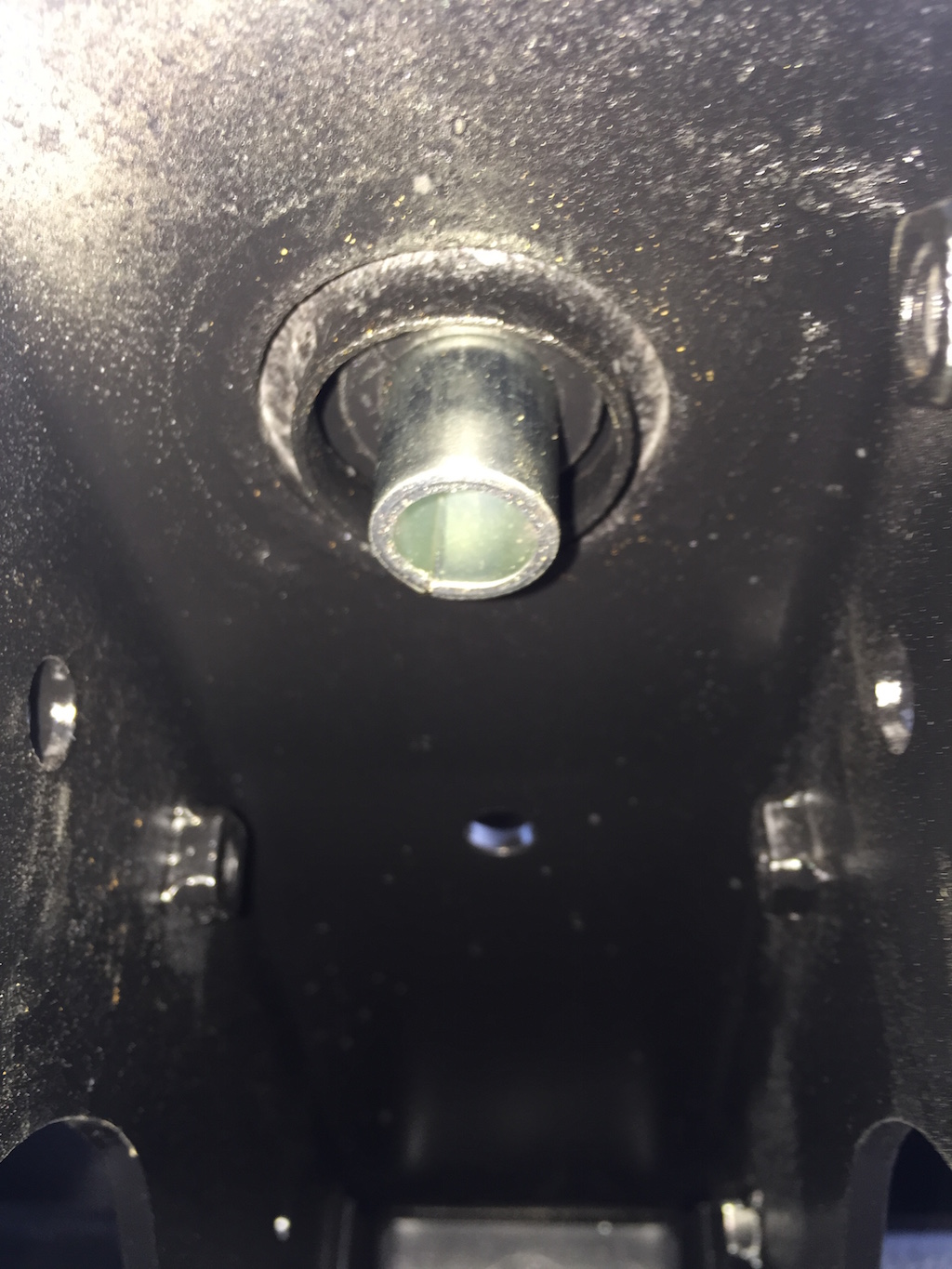 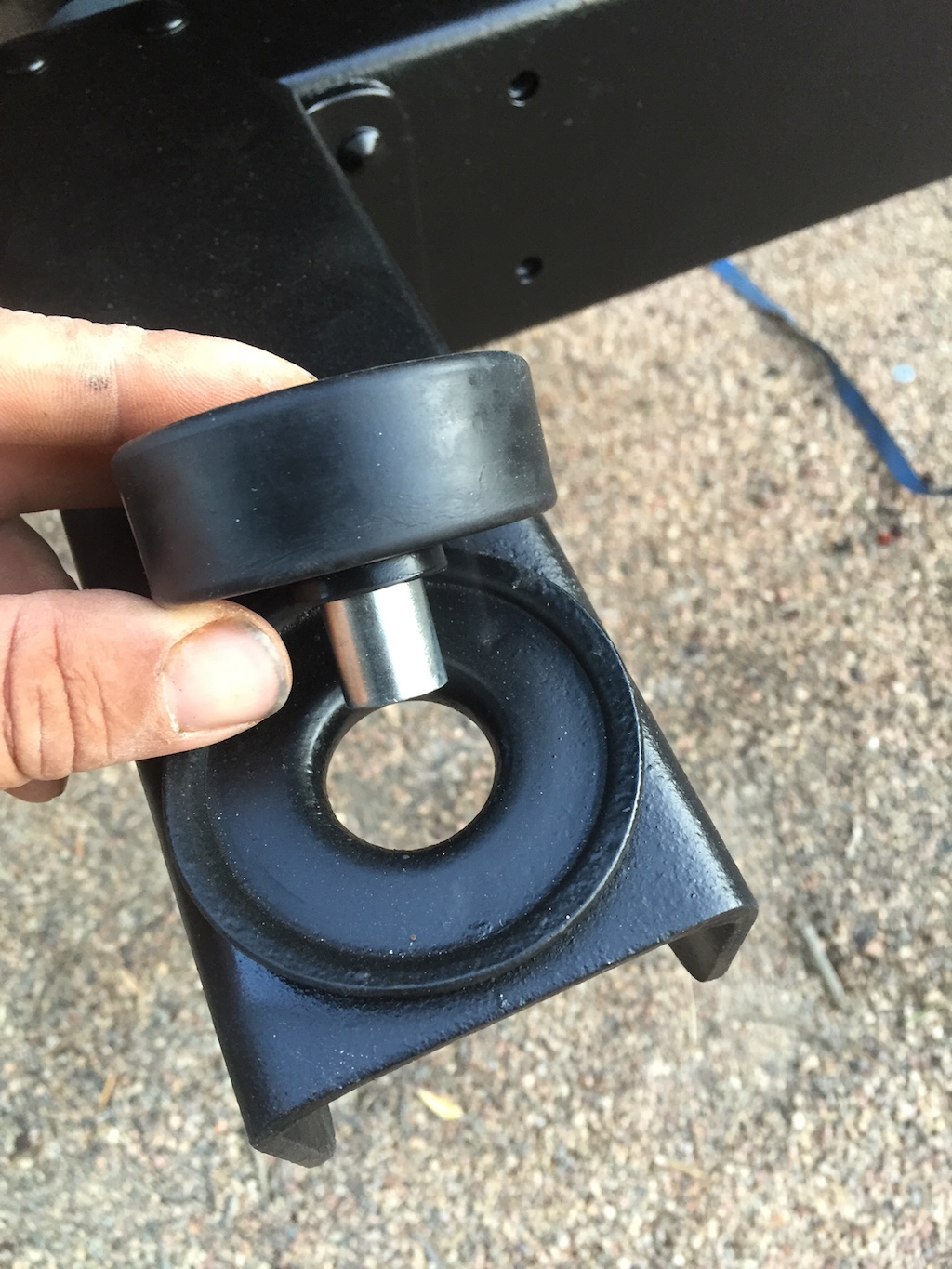 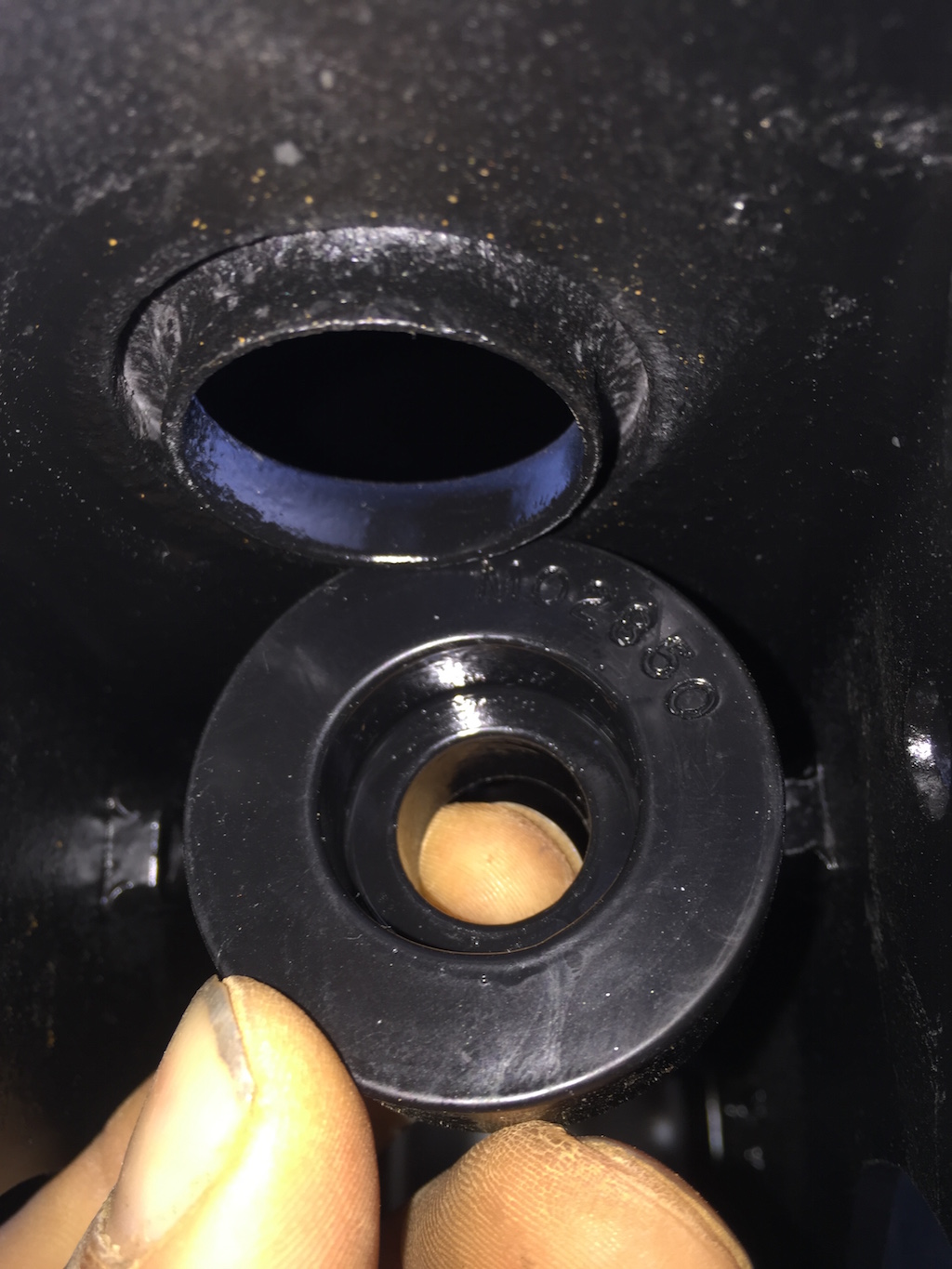 In your last pic I think you may have the bushing upside down. Small side through the hole around the tube perhaps?

The other side is flat.

Did you notice what the lower bushing looked like after you took it off? Was it indented from what you are calling the metal that protruded through the hole?

I do see what you are talking about regarding the crush sleeve. It appears to be just perfectly long enough without the frame in between the two bushings. Does your upper bushing at Daystar position 3 have a larger hole opening than the crush tube (i.e., the crush tube is not a snug fit)?

I don't have my truck in front of me so I can't check how mine would fit, but I'll try to take a look tomorrow if I get a chance.

If you could, Geoff, that would be great. I emailed Daystar and they suggested I contact CCOT to see if any other customers had the same issue.
Position 3 is where the bush is not a snug fit, position 2 is where the part of the frame part protrudes through.
And I can't remember what the bush looked like I'm afraid, it was a while ago that I took the old bushes off.
Last edited: Sep 17, 2015

I'm interested int these mounts so I did a little searching about this issue. Seems it has come up before. My guess is that you have an earlier model kit. This is based on Bambi's response in the middle of this page. IF what she had worked then you have the wrong stuff. Check page 3 for further issues with kit:

I'd Pm Bambi and ask for som input here in this thread.

I had to drill out the mid body ones, but so far so good.

Cheers for the input guys.
It would appear that the actual kit is incorrect. Daystar are sending me replacement mounts and I'm going to swap around some of the mounts in the kit to make it all work.

If you don't mind list up the set that works for us future users!

Good luck with it.

Yeah, please give the details of what is incorrect, what they are sending, who you talked to, etc. I think I may have the same problem.

I will try to look at the mounts today to see what I have.

So I've nutted it out tonight and found a solution to my issues, I also made a video to explain what's happening and a few photos to explain as well.
The issues I have are as follows:
1. The first body mount (Position 2 on the Daystar instructions) has a cup with a protrusion that passes through the frame. The supplied lower body mount bush (part# M02850) wouldn't fit over this protrusion in the frame. The supplied chassis to body mount fits fine in the frame however.
2. The second body mount (Position 3 in the Daystar manual) calls for a different mount between the chassis and body (part# M02388). This chassis mount point and the supplied bush has a larger centre hole meaning the couch tube doesn't fit and the lower mount (part#M02421) doesn't seat in the hole in the chassis.All this adds up to a lot of slop and a less than ideal fitment.
3. I'm adding this as it may or may not help others, please note that I have an earlier rear crossmember on my late model chassis so I'm unaware if this will affect anyone else with this kit but the supplied lower bush (part# M02421) wouldn't fit in the crossmember enough to enable me to fit the crush tube through and the holes in the crossmember for the protrusion in the bushing to fit through are too small.

After playing around with the bushes I found that the bushing M02388 fits perfectly over the protrusion in the chassis at position 2 on the Daystar instructions and if I used bushing M02353 (the same chassis to body mounts at position 2 and 5) at position 3 on the daystar instructions, the crush tube fits and the mounts exhibit no slop when in position.
Also, if I substitute M02850 from position 2 and use it under the rear crossmember in position 5, it fits perfectly. I do still need to drill a 23mm hole to enable the bush to fit in the rear crossmember though. (Before I start drilling holes in my nice, new chassis, if someone can measure the hole size and spacing on a later model rear crossmember, it would be greatly appreciated).
So the extra parts I need to fit this mount kit properly are 2 x M02353 chassis to body mounts and 2 of the larger washers in the kit, part# S10126.


Mounts assembled as per instructions. (Position 2 the furthest away) 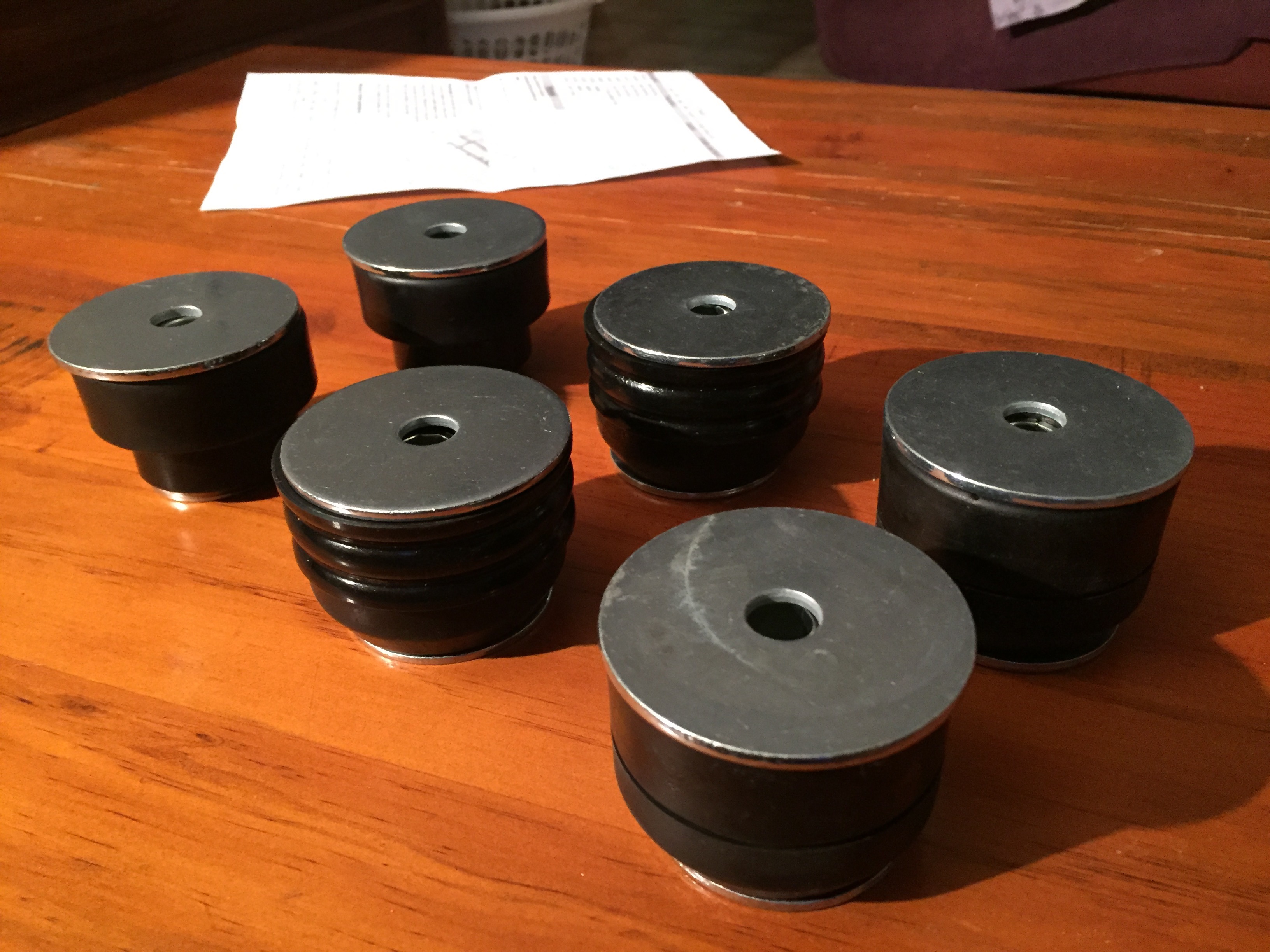 Exploded view as per instructions. 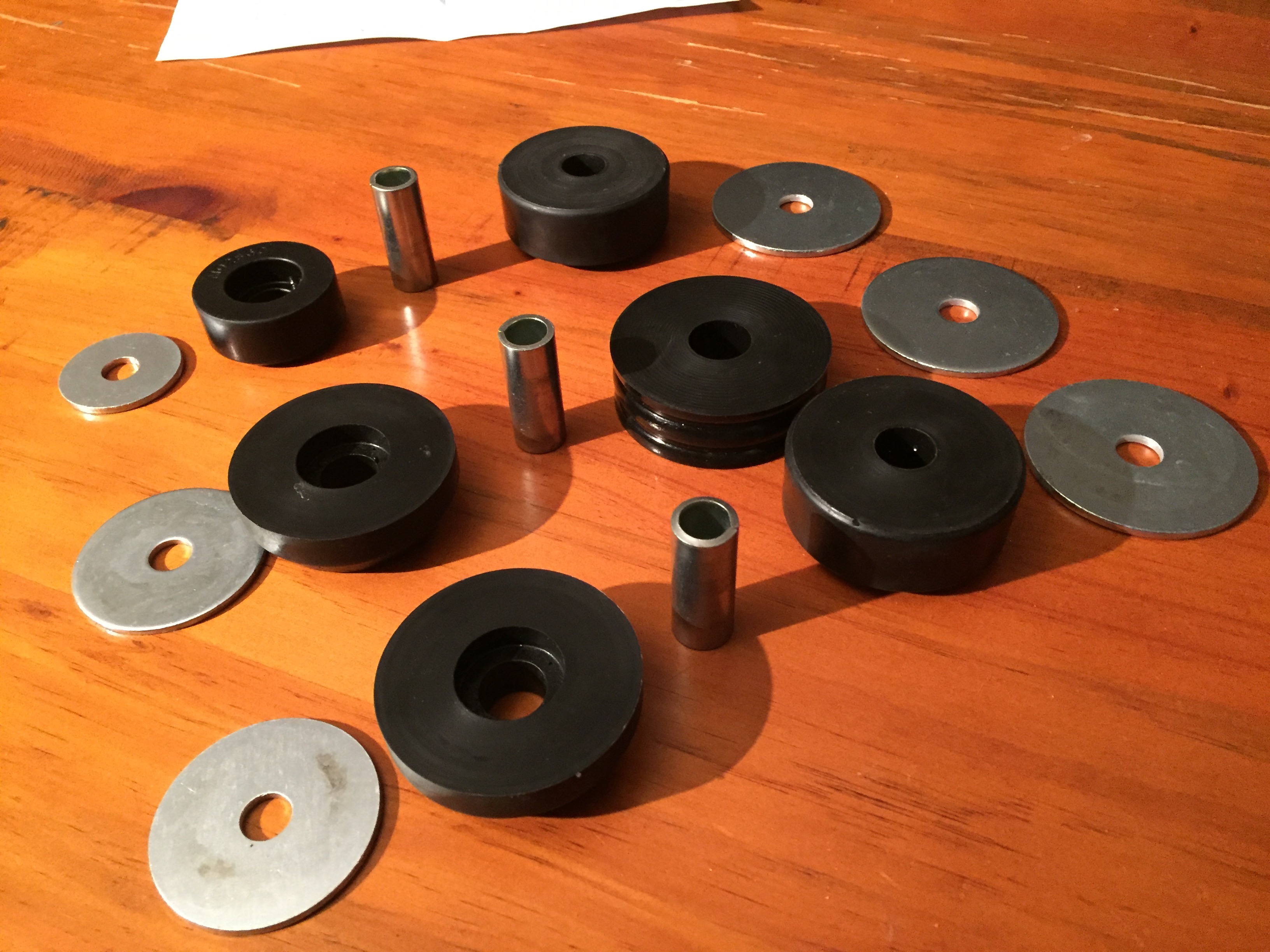 Exploded view (other side of mounts) as per instructions. 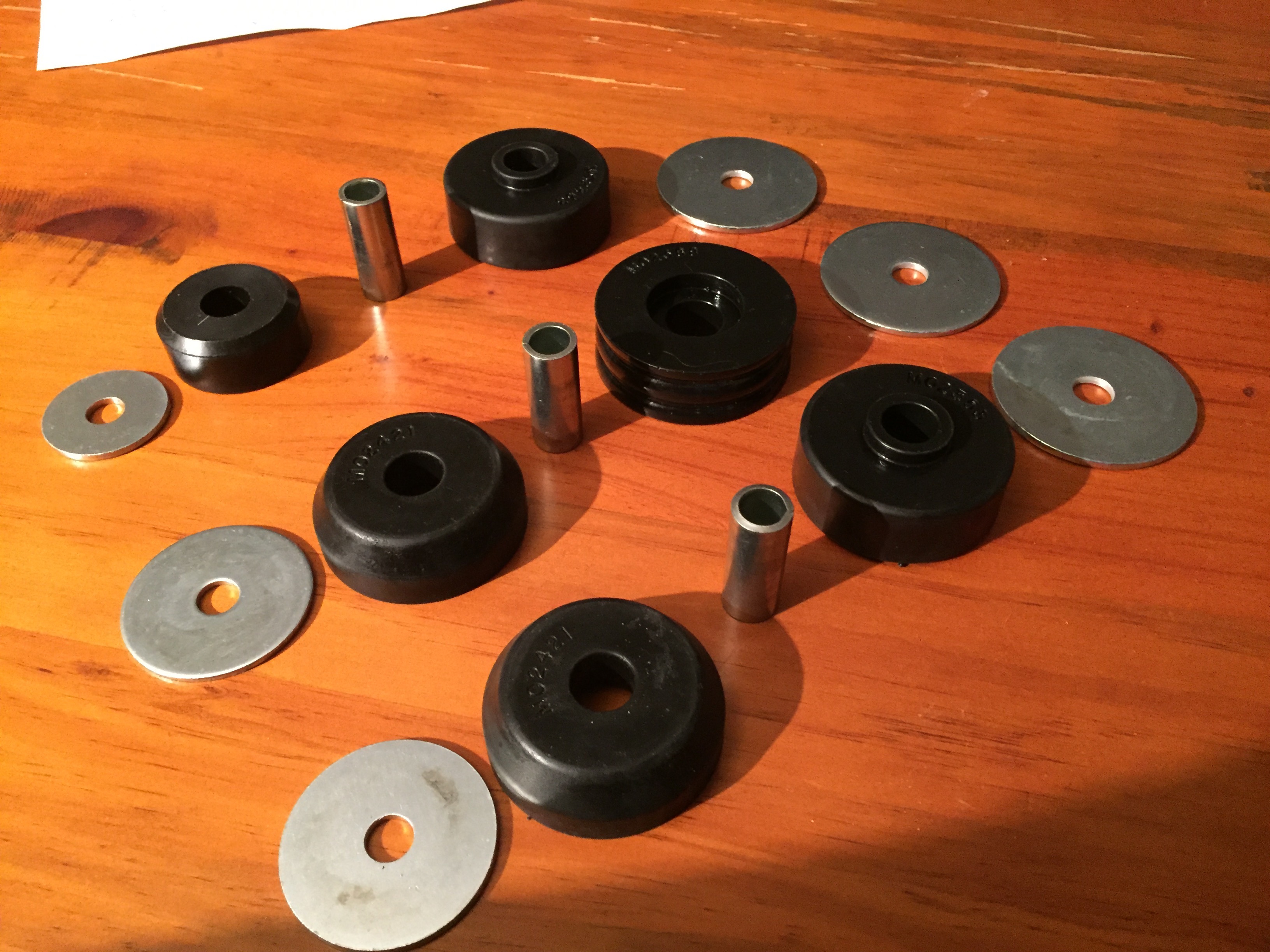 My "fix" after swapping mounts around to fit. 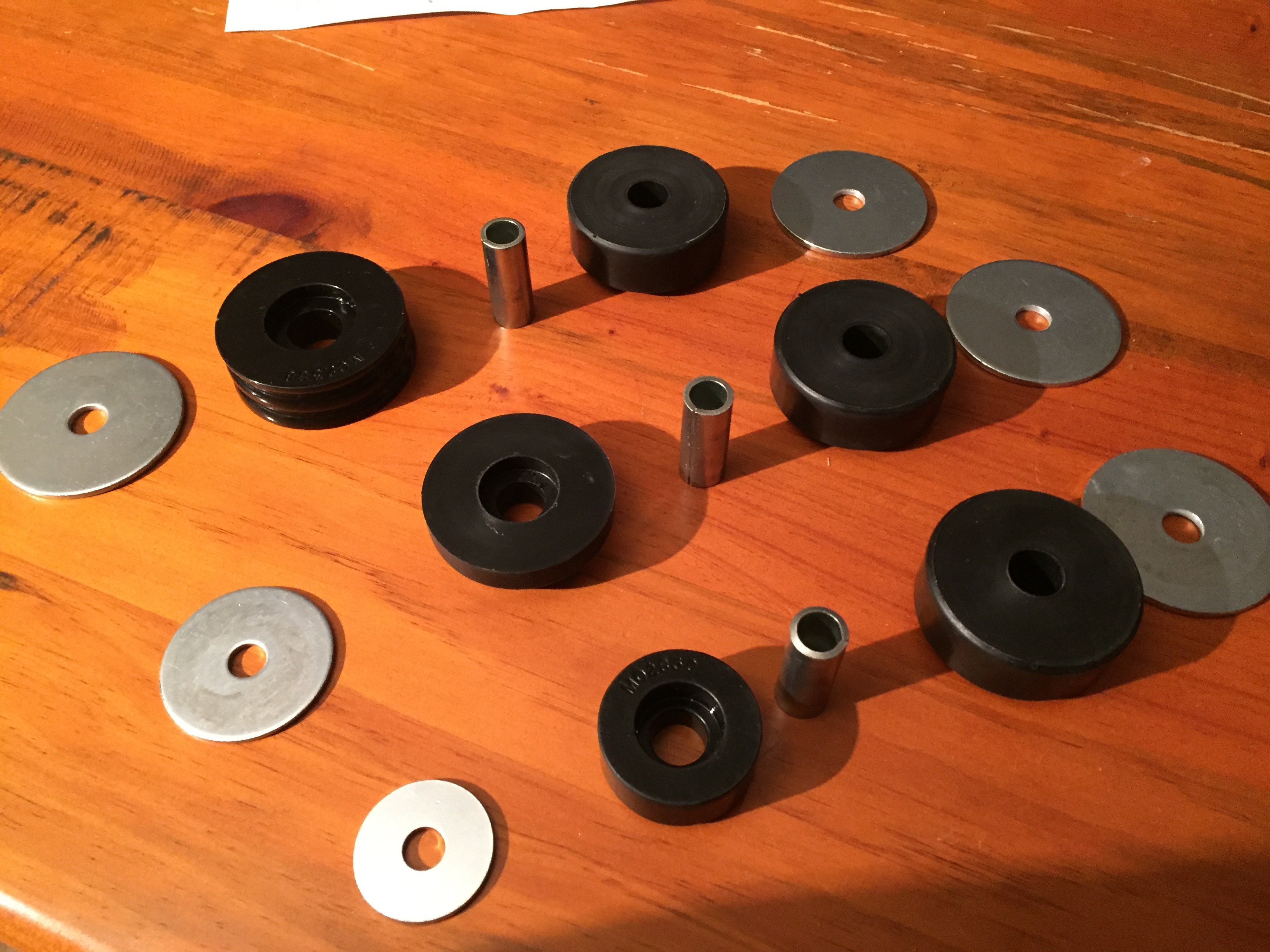 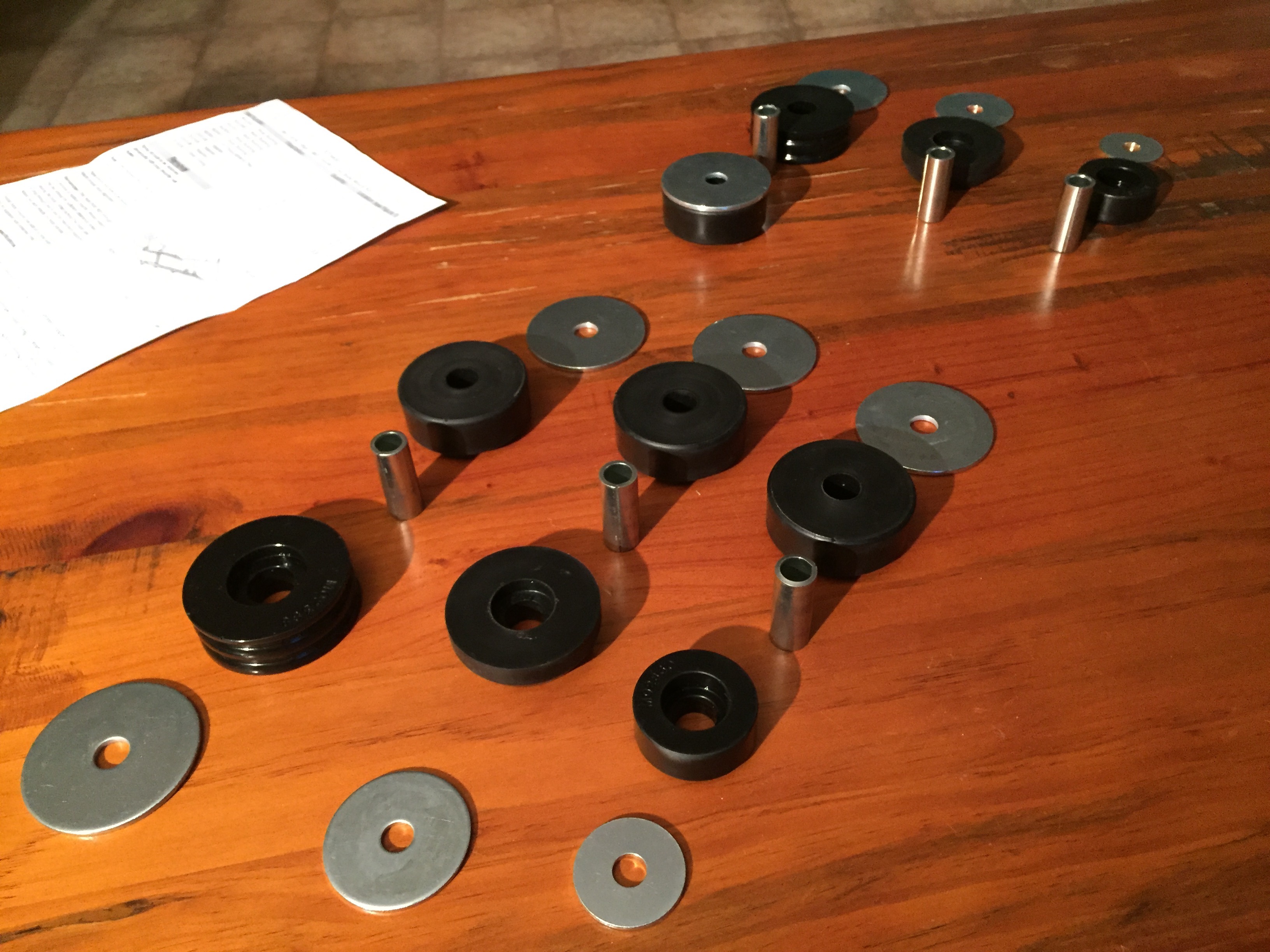 I know of a number of people having this issue both here in Australia and elsewhere and I'm currently talking to Daystar to see if I can come to a resolution about this issue and to also try and get them to check their kit and possibly implement some changes. I'll report back here within a day or so and update everyone on what is going on.
Last edited: Sep 17, 2015

Nice work. Just to add a bit here I have had a look at the Toyota part numbers for the bushings and noted the following by position:

So from this, it appears that the first and last mounts should be identical. On my frame both the front and back frame mounts have the "cup", so identical mounts from that standpoint makes sense. 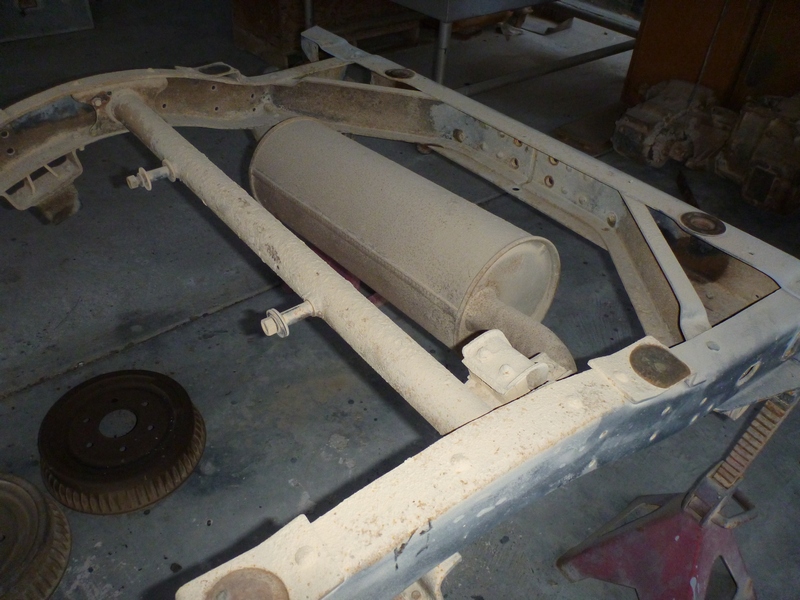 Not the greatest of pics but you can see the "cup" on the rear cross member. I will measure the distances and diameter of the holes tomorrow so you can have the requested figures.

So if we go with the idea that the first and last body mount should be identical then we should have M02353 for the upper and M02421 for the lower.

That still leaves a problem of the protrusion from the cup for the first and last frame mount. If you look at the Toyota diagram in my post above you can see that the lower bushing for the front and rear has a cup shape to it. Here is the pic of the one removed from my truck: 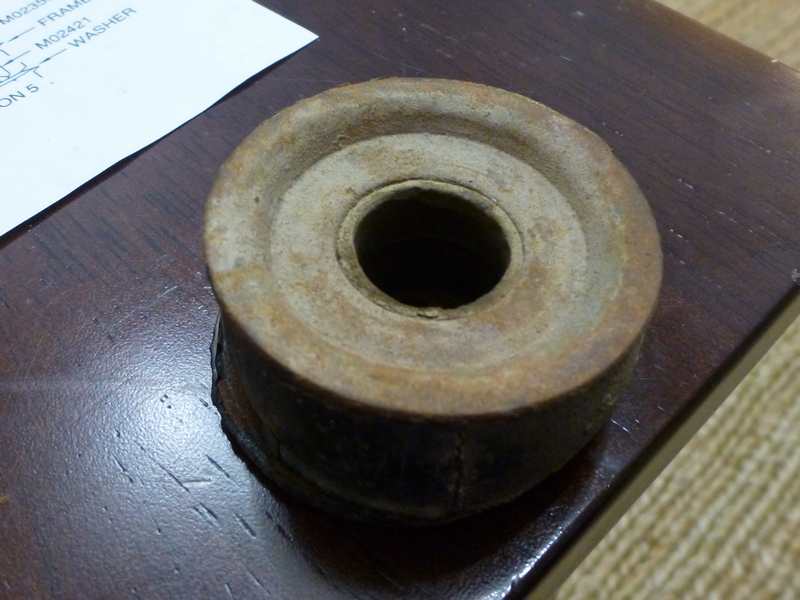 It appears the Toyota compensated for the protrusion with a metal cap that fit around this shape.

The daystar bushing M02421 has an outer diameter of approximately 61mm. 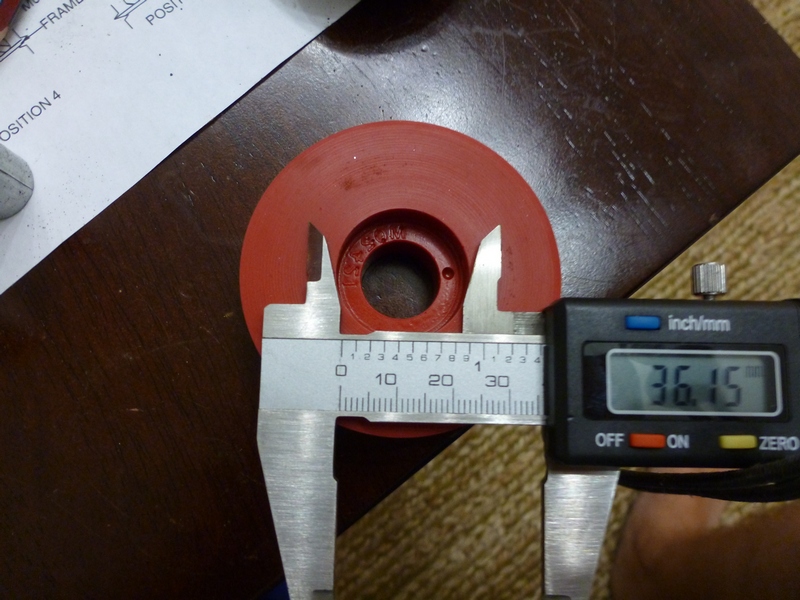 Assuming this is done for the first and last bushing sets, this leaves the middle bushing set to figure out.

From a remaining parts in the daystar kit standpoint, this would leave the middle bushing to be daystar M02388 for the upper and M02850 for the lower.

The M02388 is the one you noted had the larger hole. It's hole diameter is approximately 19mm compared to a hair less than 16mm for all others.

What is interesting is that the original Toyota crush tube is a bit over 17mm in diameter compared to the 16mm from daystar. 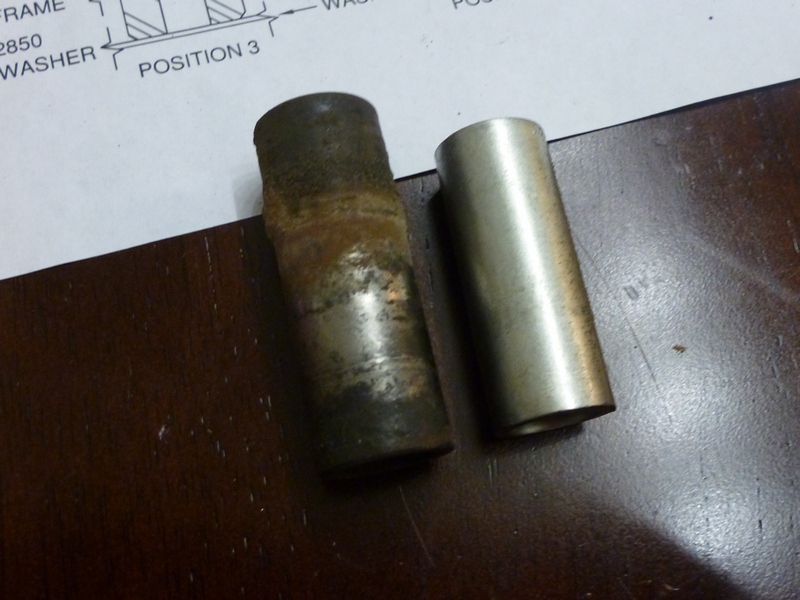 I don't have all of the old bushing sets with me right now but the Toyota middle upper bushing also had some sort of thick fabric backing on the side that touched the frame. This fabric looked similar to the fabric radiator support mount isolaters. I will try to get a picture of this tomorrow.


Work in progress, but if this can work then new parts from daystar will not be needed... I do agree that it would be good if the daystar kit would be better. 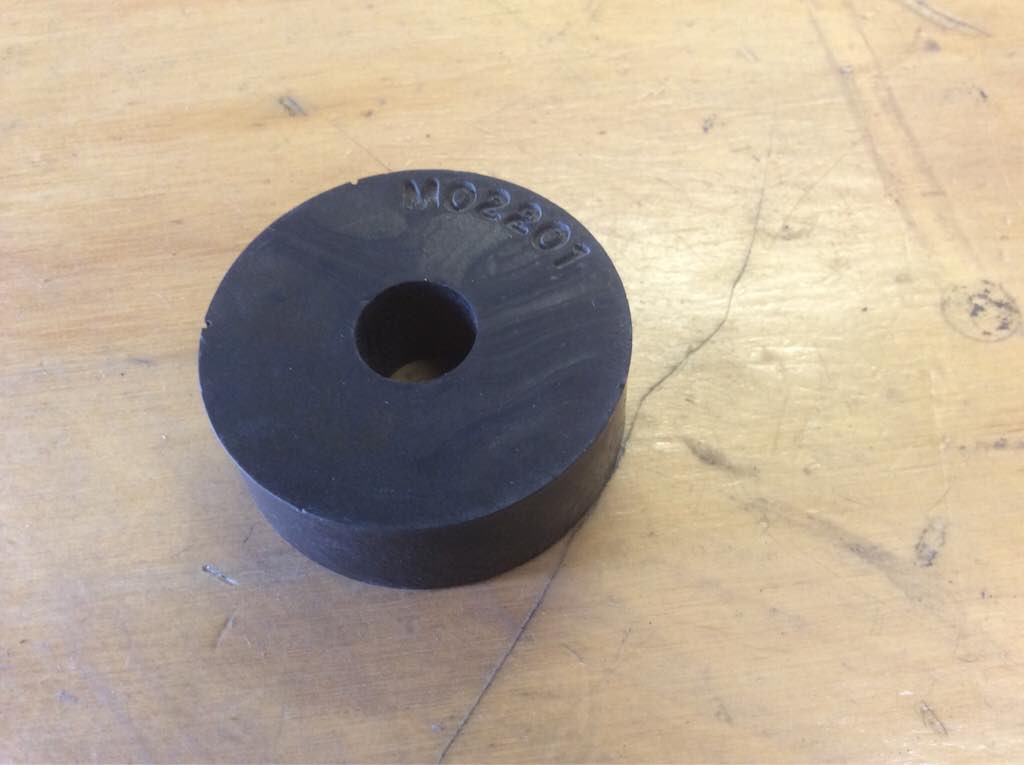 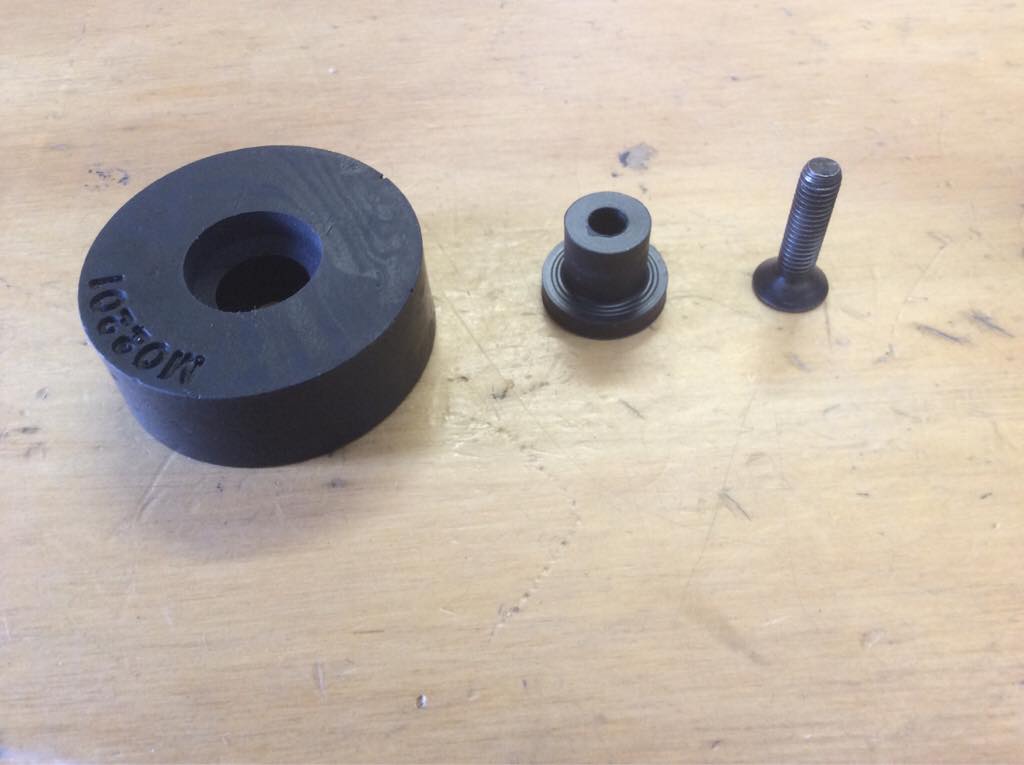 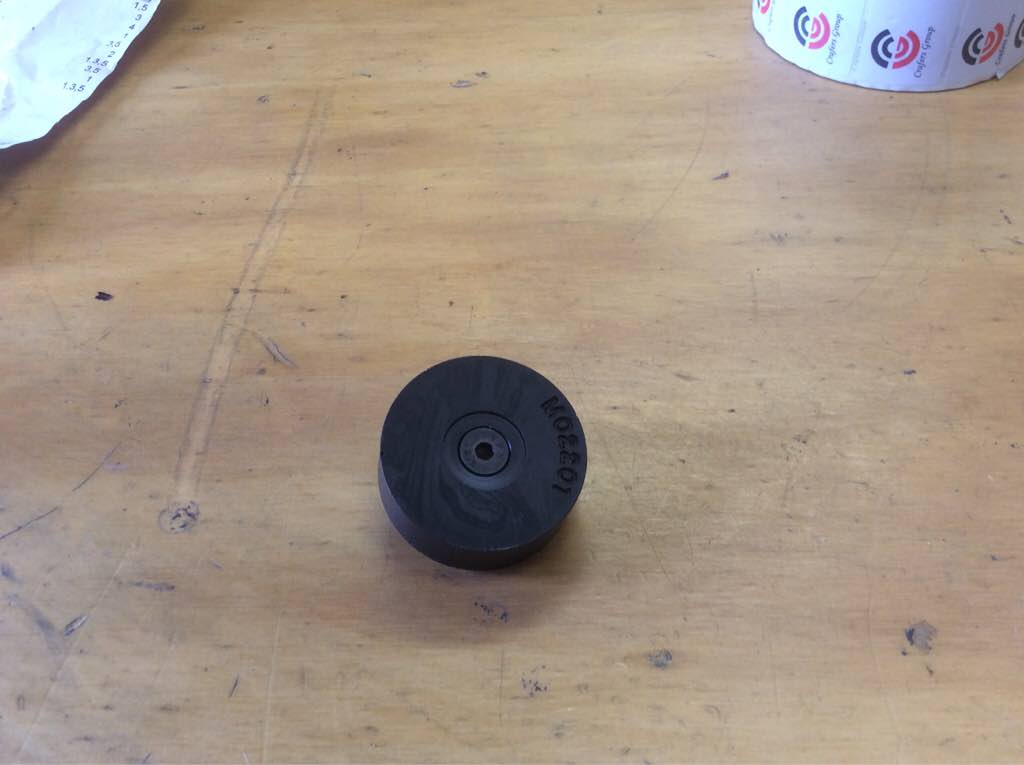 @Usernametaken I measured the rear crossmember mounting holes and have the following:

Pic of top and bottom site of hole: 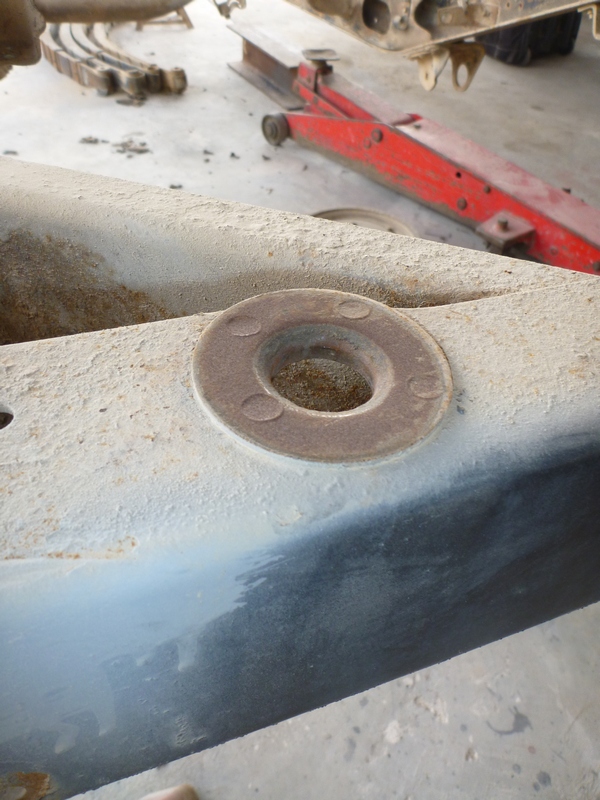 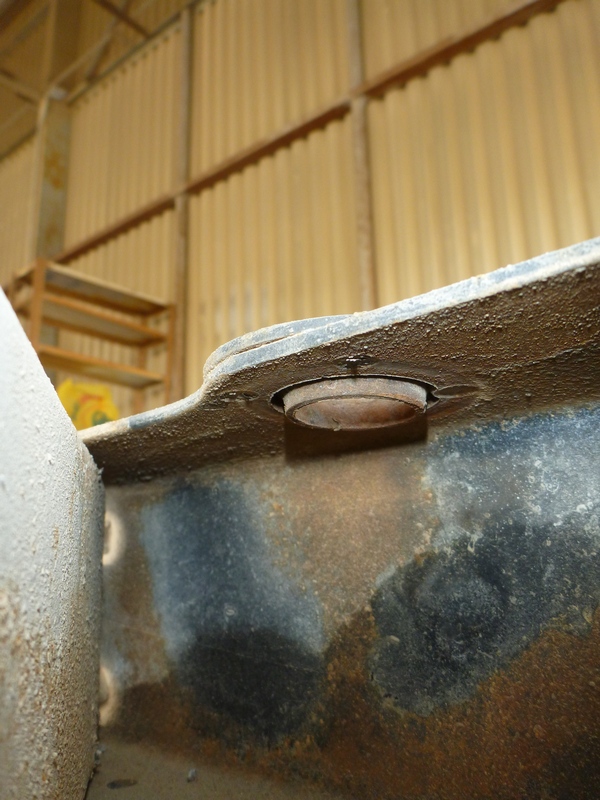 As for the position of the holes on the crossmember, I must admit that I had trouble taking pictures of this and that I forgot to take a couple, but here are my measurements:

Position from end of crossmember: 17 1/2" both sides. (Line may not represent actual location - distance is what is important). 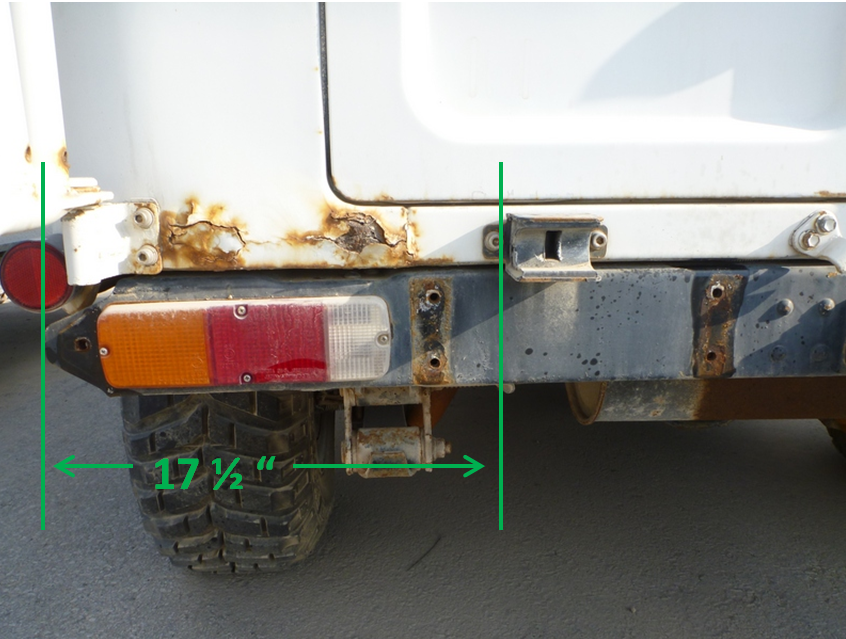 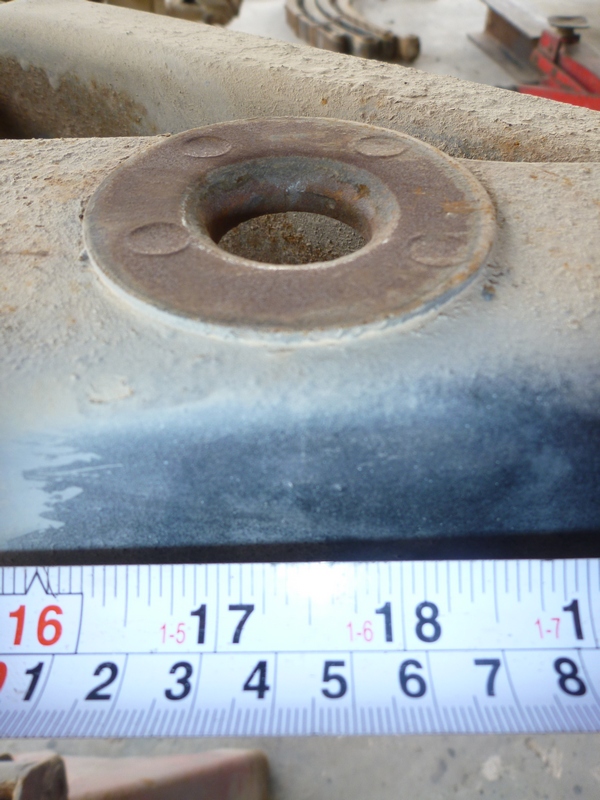 Distance from top of rear crossmember from the outer point of the angled edge: 14 3/4" 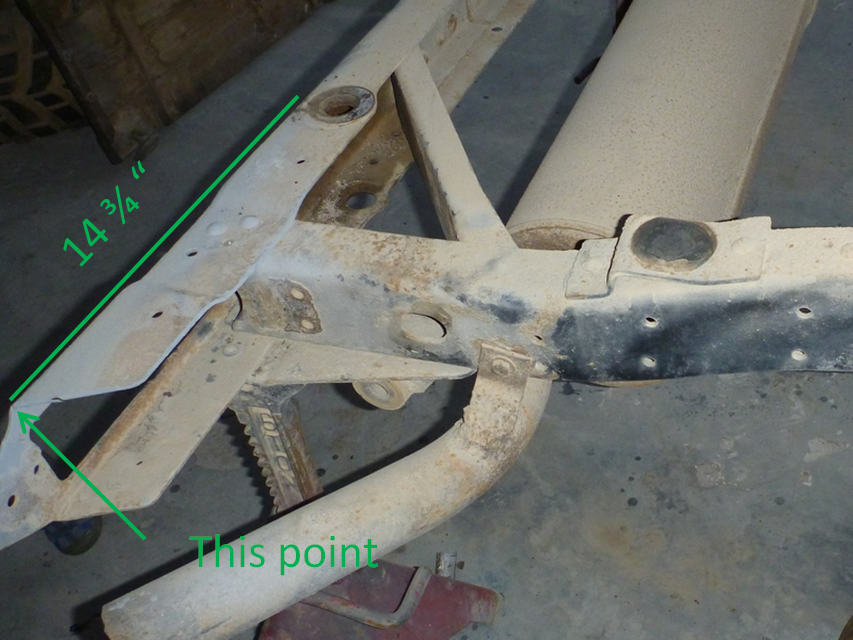 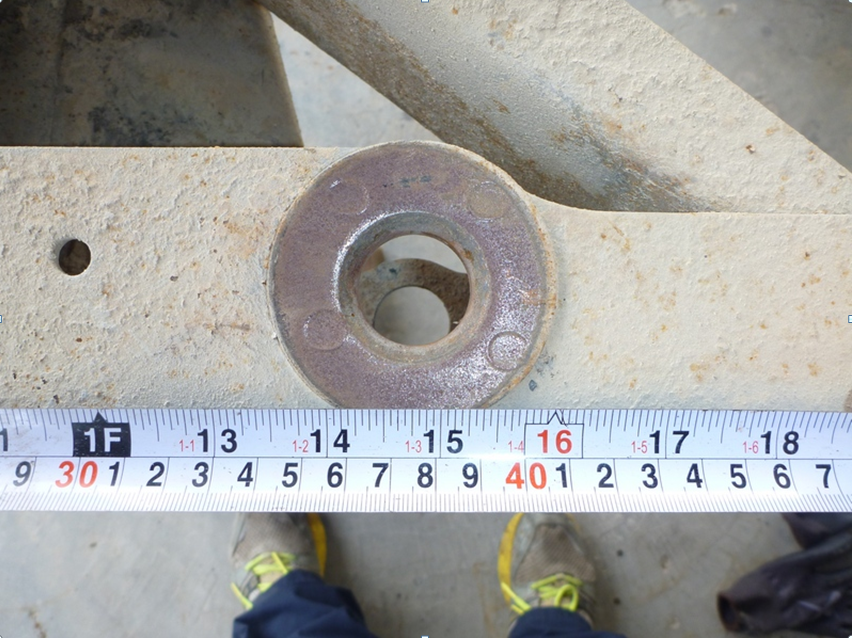 Distance between both holes: 27 1/8" centerline to centerline 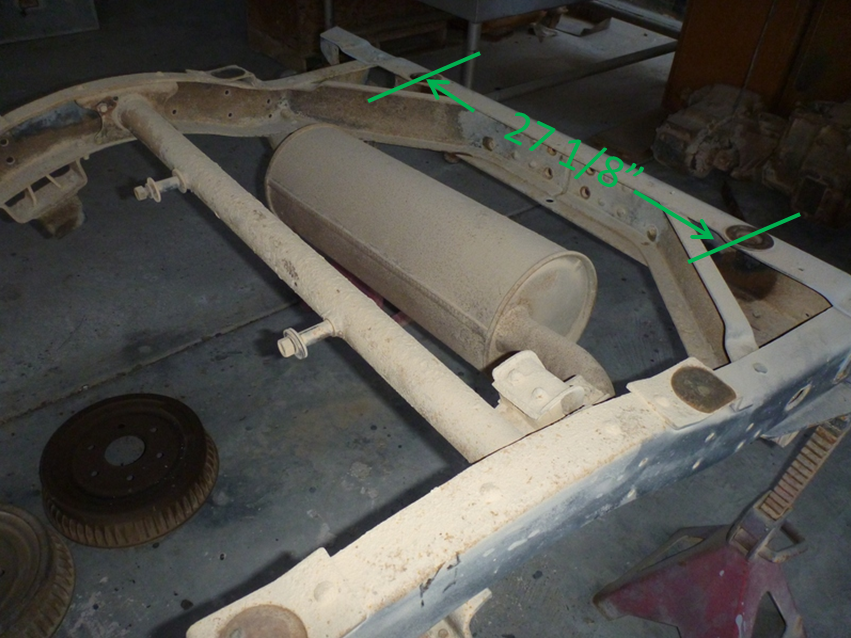 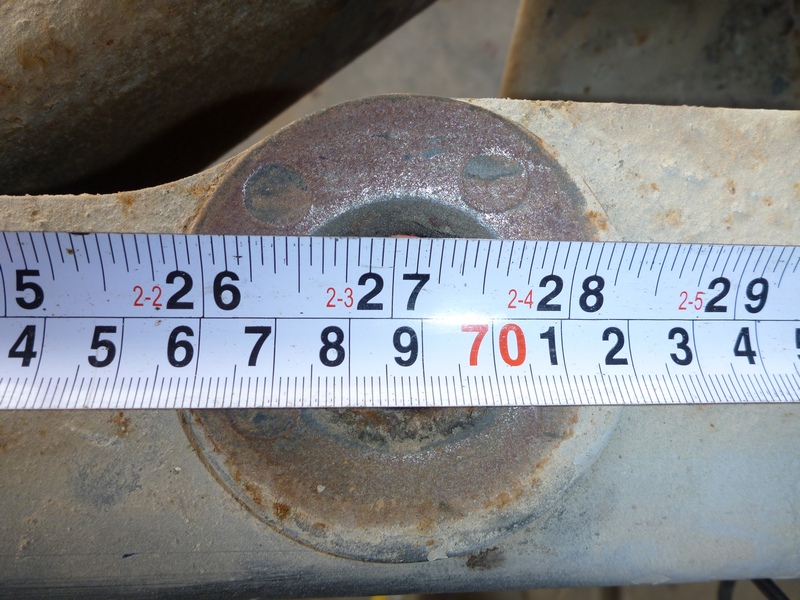 I will say that measurements were difficult and parallax from taking the pictures does distort the position of the tape measure, but this is the best I could get.

Perhaps there is someone out there with more refined measurements.

-Geoff
You must log in or register to reply here.

New body for the family 55