I have a 2003 Limited Tundra with 255,000 miles, which I bought new off the lot with only 4 miles on it. It is the most reliable car I've ever owned. I've never had a problem with it. All I've ever done is just standard maintenance and after 16 years, it still runs and looks like it's brand new.

Now to the issue... The steering was starting to feel a little sloppy, and I wanted to freshen it up. So, I bought new poly steering rack bushings, new inner and outer tie rod ends, and it was time for shocks and tires. I put on the steering rack bushings, and took it in to a reputable local shop (my friends Dad owns it), and had them put on the tie rod ends, shocks and do an alignment. I got it back and there was a horrible vibration in the front end. The steering wheel shook like crazy at higher speeds (anything above 50mph). I thought, maybe with the new stuff, the old tires (70k miles on BFG KO1 AT's - 265/70R17) were causing this, so, as planned, I took it down to the tire shop and bought new tires (BFG KO2's - same size). The shake was still there. I took it back in to my friends shop, who checked over all of their work, and said when they checked the alignment, it was good, but they did "straightened the steering wheel" and rotated the tires. They said on their test drive, the shake went away in the front, and you could slightly feel it in the back, so I should have the tires rebalanced. I test drove it, and I could still feel a slight shake in the front, the steering wheel still rattled a little, and maybe it was the back, maybe it was the front. I'm not 100% sure. I took the tires back to the tire shop and they rebalanced them, but I could still feel the shake, and after this, it feels like it's still coming from the front, not the back. It's not as noticeable, but it's still there. The shop says they think it's a bent rim or out of round tire. I don't think it is, because this truck was smooth as could be prior to the work. Do you guys think it's the alignment? The shop also said, because I put new stuff on (steering rack bushings, tie rod ends and shocks), that maybe the "shake" was hidden, and is now showing because other bushings and components are worn out. I have a hard time believing that a shake this bad would be hidden. I really think the alignment has something to do with it. The steering wheel feels light and wonders a little. What are your guys thoughts? Should I just bite the bullet and take it to a different shop for another alignment? I'm at a loss, this sucks!

Steering Wheel shake is almost always caused by balance issues.
The light steering wheel feel points to low caster which could cause shake to show more.
Can you post alignment specs?

Also does it change in 4wd.
Maybe trying running it on a rack so you can see from outside.

If the new tires were installed before the problem was corrected, then they could possibly be affected by a run out issue.
Did they check the upper/lower ball joints? Control arm bushings?
I would get a second opinion.

@gnob Here are the before and after alignment numbers. It doesn't pull or anything, the steering wheel just has a slight shake. I took it to the Toyota Dealer who also said wheel shake is most likely due to tire balance. The tire shop re balanced them and I asked them to check that the tires are true, but there is no change. The strange part is that it was the same shake with the old tires and with the new tires. The only difference were the shocks, tie rod ends and alignment. The truck was smooth as could be before that stuff.

A theory I have is possibly warped rotors. I have 60k miles since I last changed my rotors and pads. Could the old worn out tie rod ends been masking a warped rotor, and now that everything in the steering is stiff, I can feel it in the wheel?

I can't get it on a rack to run it, besides, I'd be scared to, because it only does it at high speeds.

@splitshot The new tires have probably 100 miles on them since the shake started, do you think that would ruin the tires? The lower ball joints are new in the last 5 years (OEM Toyota), uppers are original, but they checked them and said there is no play. I have lifted the truck and shook the wheel on top and bottom and do not see any play. (I'm a pretty big guy and reamed on them, and they were solid, and the boots show no wear.) Control Arm bushings are original as well. I don't think any of this would cause it, only because the truck was as smooth as possible prior to the recent work. 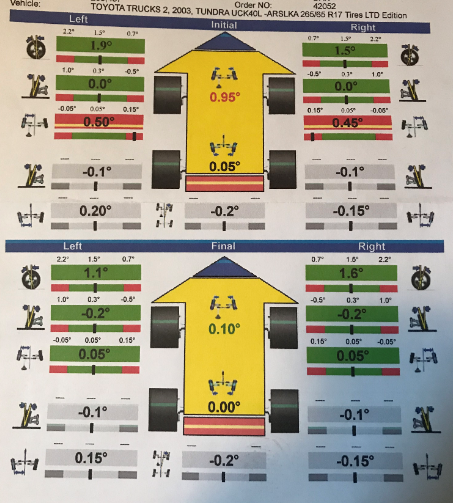 There's a really good tire guy in town, I think I'll go to him instead of Costco - where I bought the tires. If it is the tires, it will be quite the coincidence that with the new stuff put on, both the old set and new set of tires shook the same. I'll report back in a week or so. Thanks for your guys replies!

Borrego said:
I'll report back in a week or so.
Click to expand...

Had to do some shopping at Costco, so while I was there, I took them back in for the 3rd time... they put their tire center lead on it and said he couldn’t get them to balance, so they are currently installing a new set! I’ll let you know if it fixes the problem. Fingers crossed!

The saga continues... When they put on the new tires, they got them balanced and said everything looked true, but, they gave them to some kid to install on the truck, and he used the air gun to install and cross threaded one of the studs, and when he took it off to try to redo it, he broke the stud! So now, I have to go get the stud fixed, and Costco said they would reimburse me.

However, when driving the truck in this morning at speeds up to 80, there was no shake!

Good to hear.
Sad fact is it's getting harder to find decent techs, especially at a chain store. I worked at Firestone for a few years and it waz ridiculous.
I literally had guys "balance" wheels without ever setting up the machine. Constantly having them not final spin check, or blowing wheel caps out with the balancer spindle. Idiots don't realize (or care) that come backs cost money, and that especially sucks when the service is free to begin with.

Just a thought. If they are aluminum wheels make sure the mounting surface of the wheel is clean of corrosion and also the rotor/hub surface. They can balance good and look true because a cone is usually used to center the wheel on a balancer instead of mounting on the flange. I've also run into issues like this where a chunk of rust make it's way in between the hub flange and rotor. That would make the whole rotor and wheel wobble when driving but look good on a balancer.
The other thing assuming it's 4wd is to get under and see if there is considerably more movement shaking the inner CV joint up and down at the left side of the front differential compared to the CV at the right output.

Oh disregard all that. Glad to see it looks fixed!

Appreciate the feedback! All is good now! I ended up going to the dealer to have the stud fixed, and I had them do an alignment as well. They said the caster was off and the toe was slightly off. Glad I bit the bullet and went to them. I’d hate for my new tires to not last.

Now I have to send back the leaky shock to Bilstein and hopefully get it refunded for warranty. The bad thing is the shop that installed them somehow but a hole in the boot cover. The shock looks like it’s been used for years after they were done taking it off. Hopefully they refund me!
You must log in or register to reply here.
Share:
Facebook Twitter Reddit Pinterest Tumblr WhatsApp Email Link